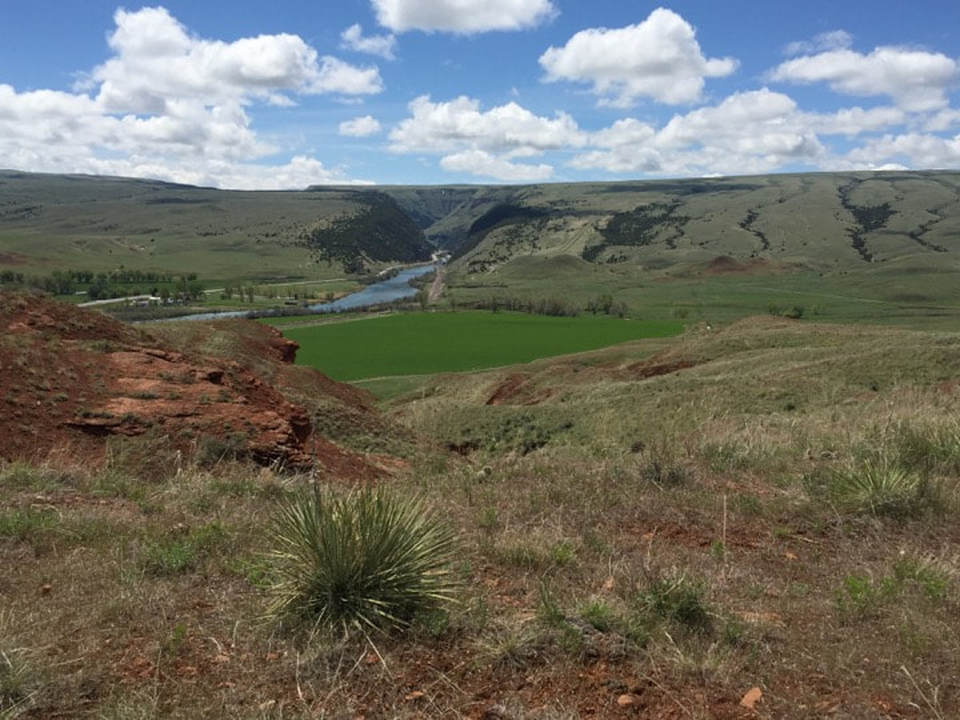 View of erosion surface at top of the Madison Formation near Johnson Draw. Geologic notation: Pp: Permian Phosphoria Formation Pt: Pennsylvanian Tensleep Formation Pa: Pennsylvanian Amsden Formation Mm: Mississippian Madison Formation. This view is at 6.6 miles.
​Image: Google Earth Street View
The Madison Formation was deposited on a shallow marine water platform that was part of a large carbonate province located between zero and five degrees north paleolatitude. The platform was bounded on the north by the Central Montana Trough, by the intercratonic Williston Basin to the northeast, the Transcontinental Arch to the southeast, and the Antler Highlands to the west. 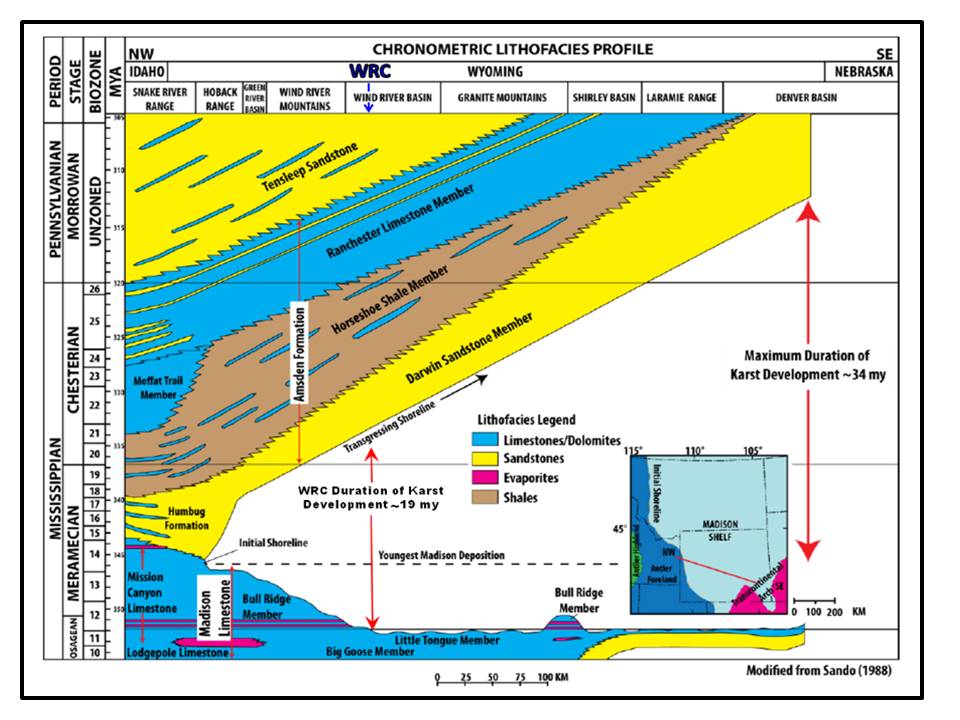 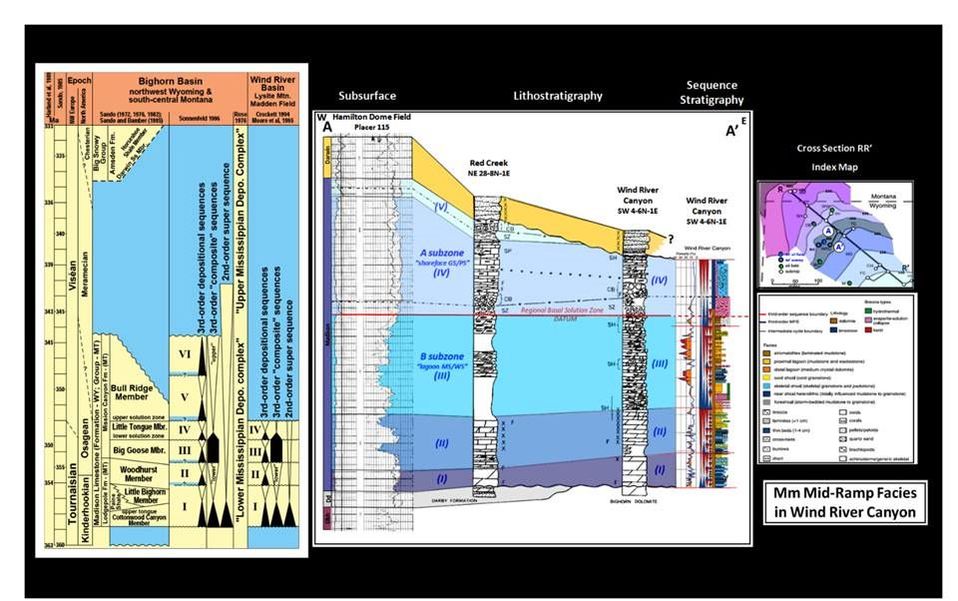 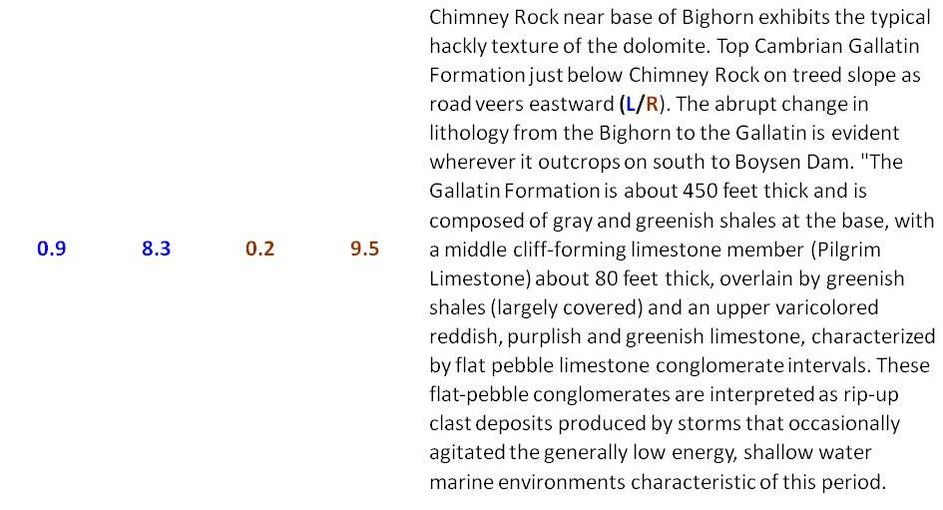 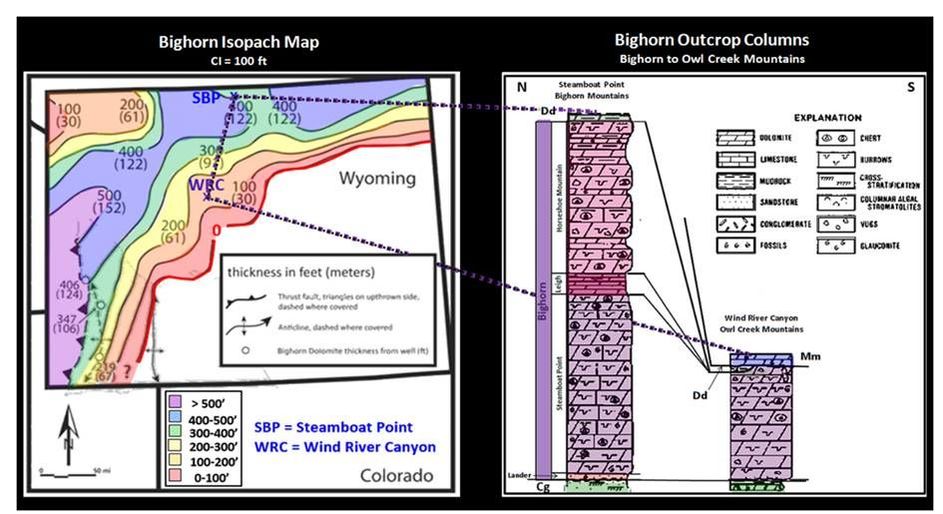 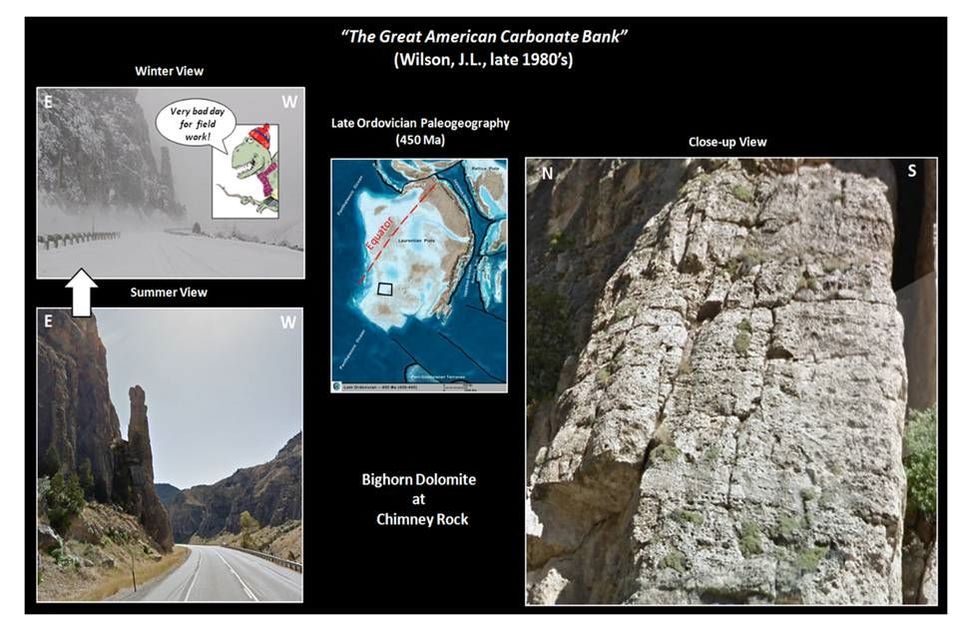 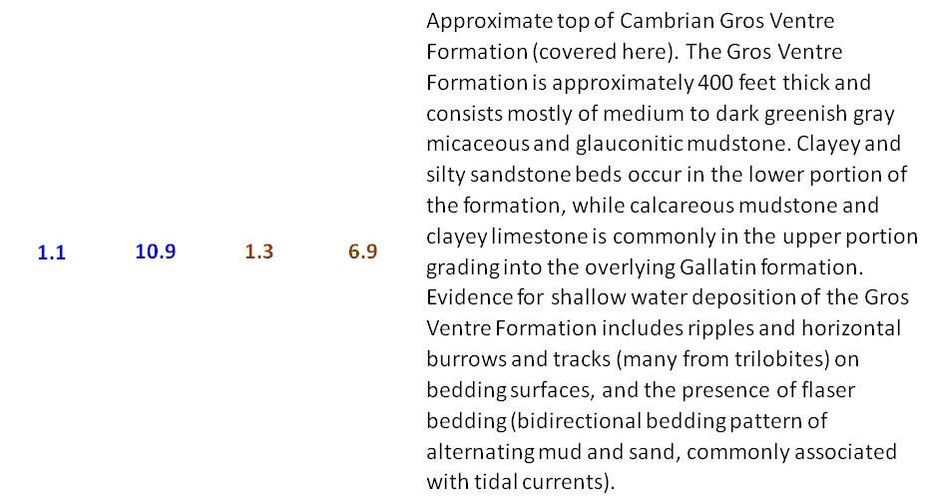 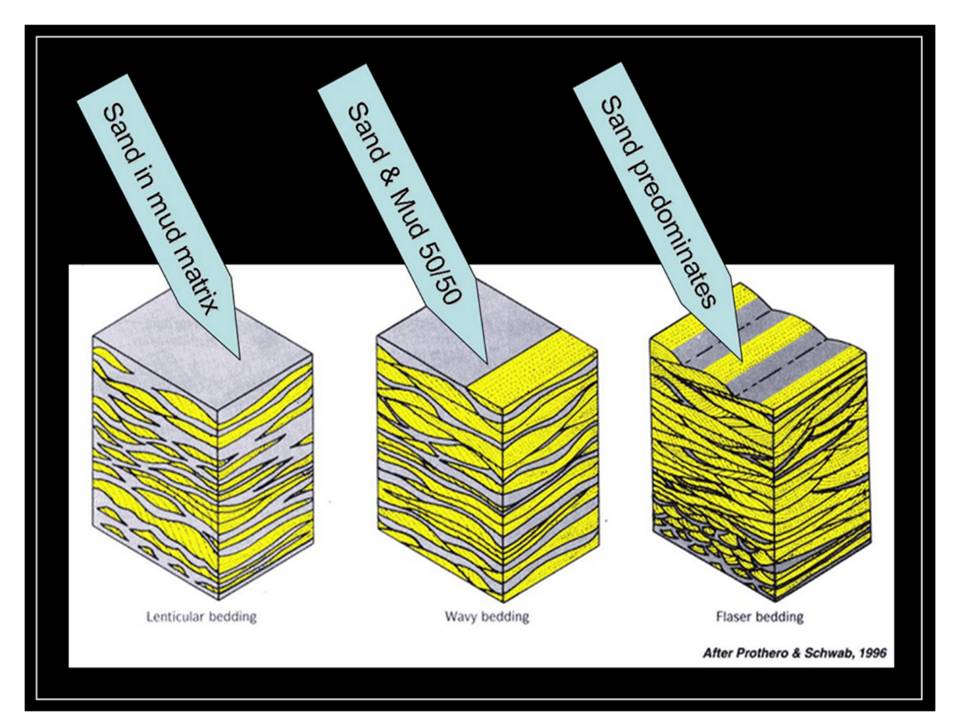 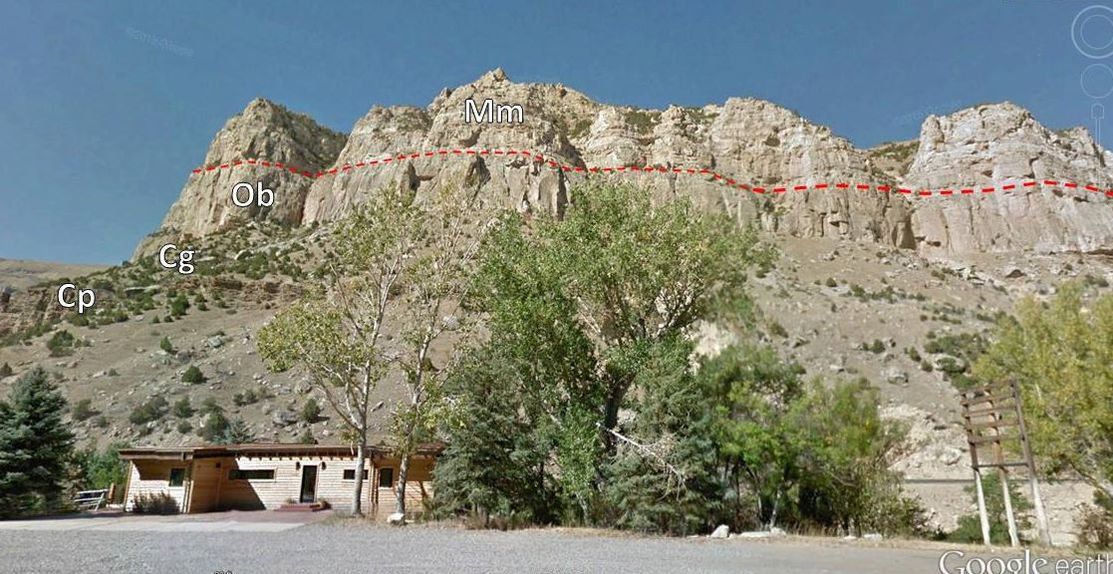 Madison (Mm) and Bighorn (Ob) on skyline on west side of highway. Slopes are Cambrian Gallatin (Cg) and Cambrian Pilgrim Limestone (Cp). This view is at 12.2 miles.
Image: Google Earth 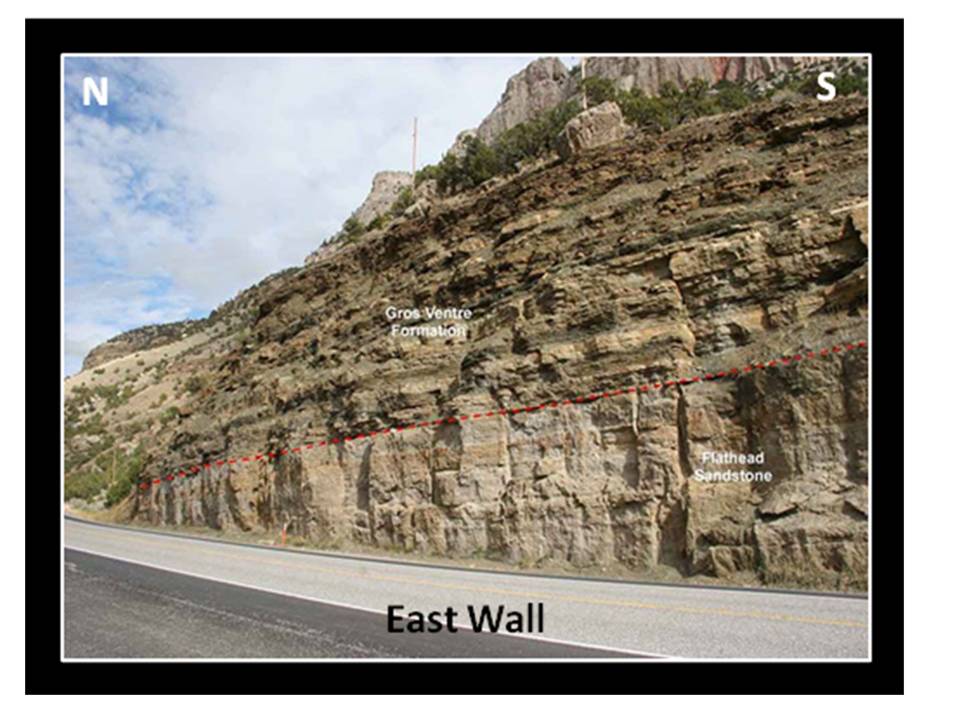 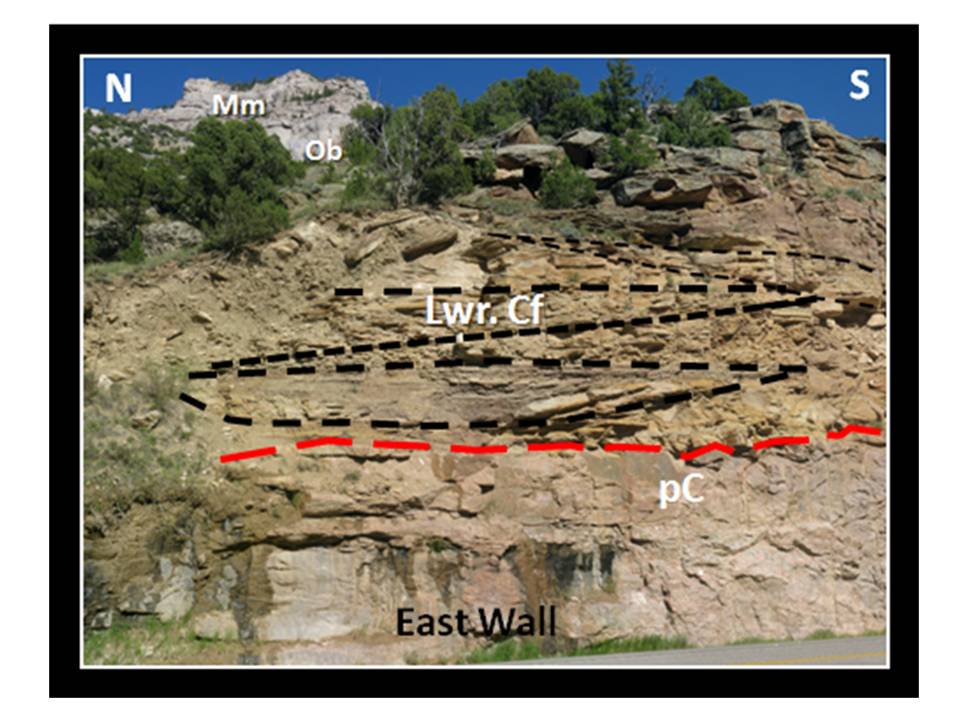 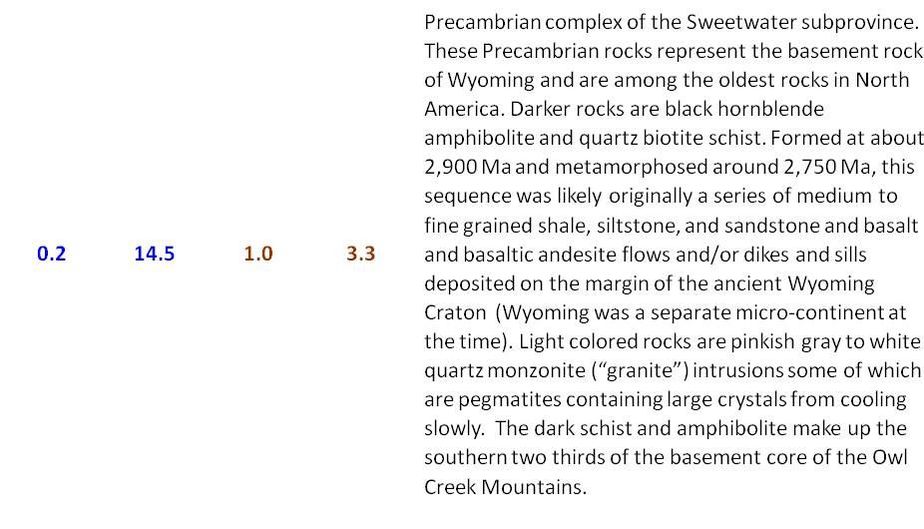 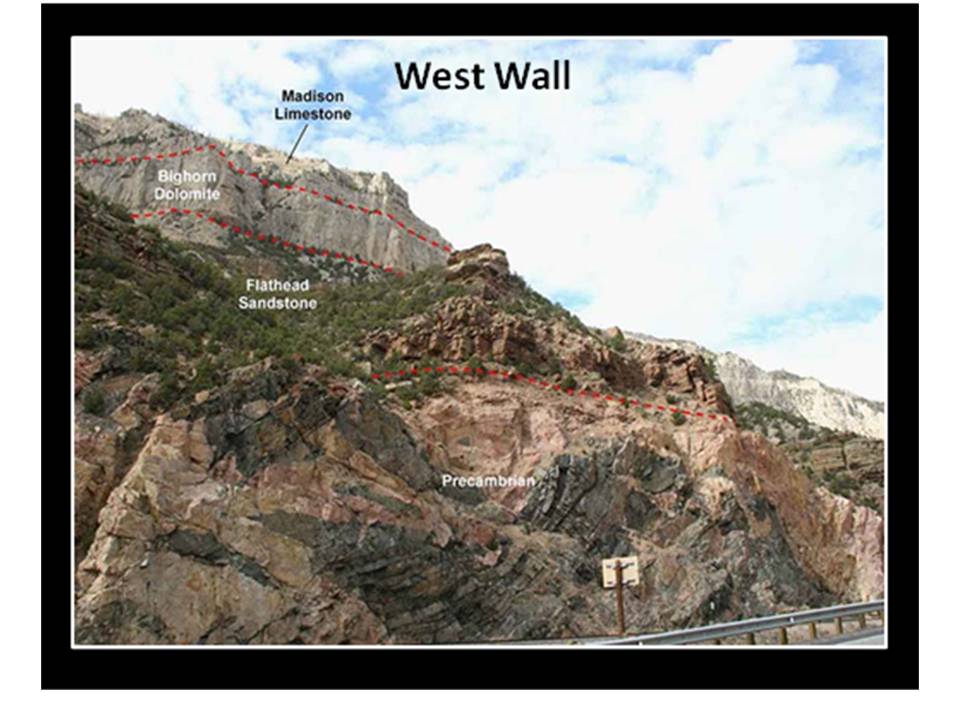 Younger pink granite pegmatite intruding into Archean-age black schist and amphibolite, that were originally sediments and extrusive basalts deposited in the Sweetwater trough. This ancient trough developed at the margin of the Wyoming craton almost 3 billion years ago. It marks the suture between subprovinces within the craton.
​Image: http://www.wsgs.uwyo.edu/research/stratigraphy/OwlCreekMts/OwlCreekMtsPALEO.aspx 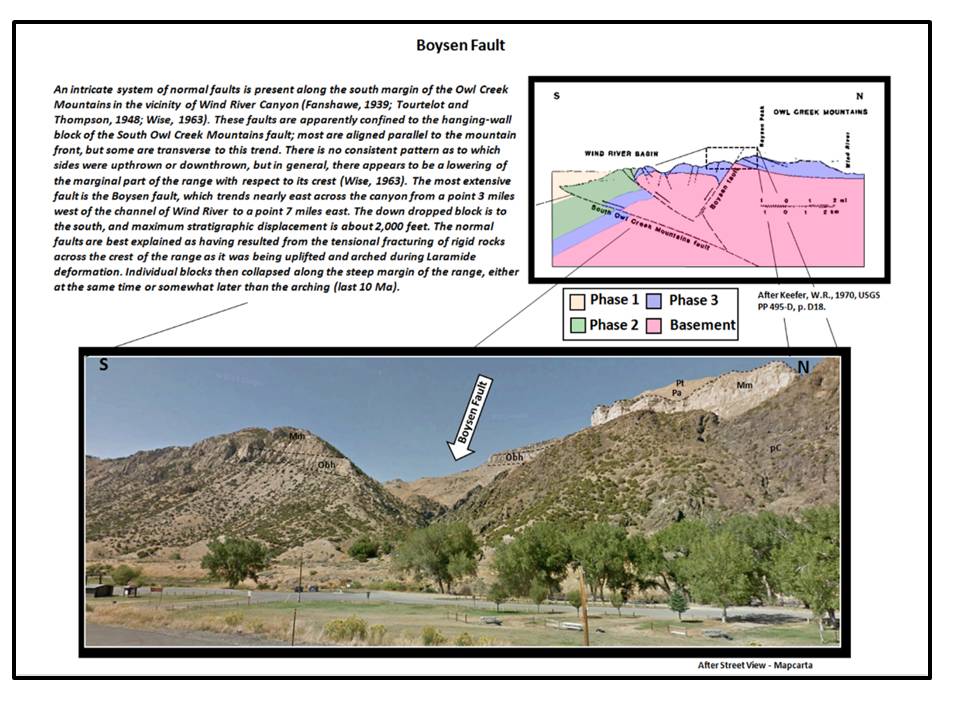 ​The original Boysen Dam was located across the canyon on the upthrown side of Boysen Fault. The dam was constructed in 1908.  Asmus Boysen envisioned a source of water and power for nearby mining operations. But events did not work out for his dam. Electricity was delivered to the mines, Shoshoni and Riverton beginning in 1911, but the railroad had begun legal proceedings against the power company in 1908. The 1915 Wyoming Supreme Court ruling required removal of the dam’s super structure and made power generation unprofitable. The 1923 flood silted the plant generations and that ended its short existence. Mining activity slowed, more lawsuits arose and flooding continued to plague the railroad line in the canyon. After numerous legal battles the dam was finally removed in 1948 as part of constructing the new dam. Some of the abutments from the old dam can still be seen on the canyon walls on the south side of tunnel #3. The land upon which the upper and lower campgrounds are located was created by siltation from flooding. The new dam was completed in 1953. 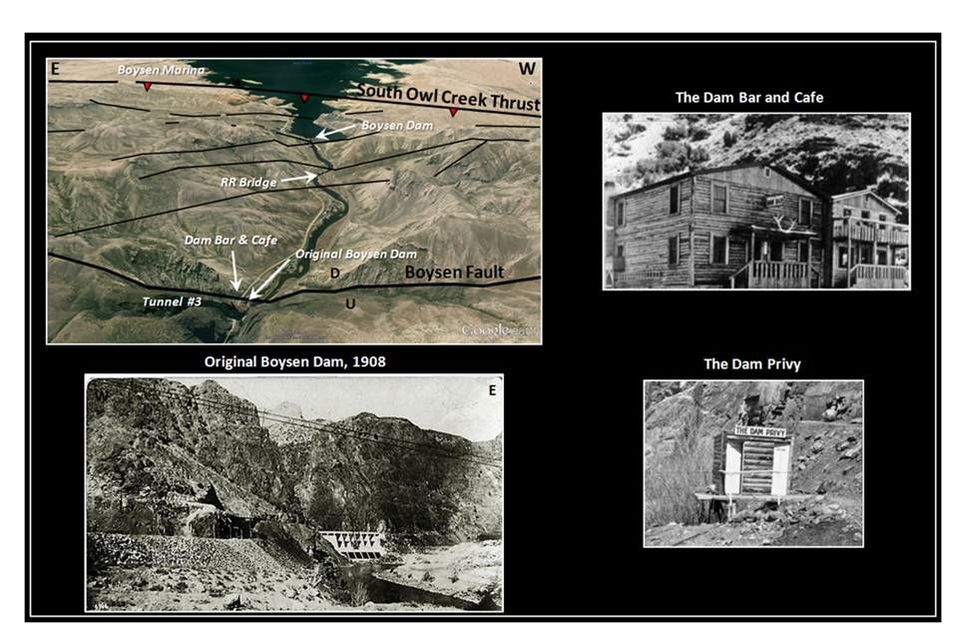 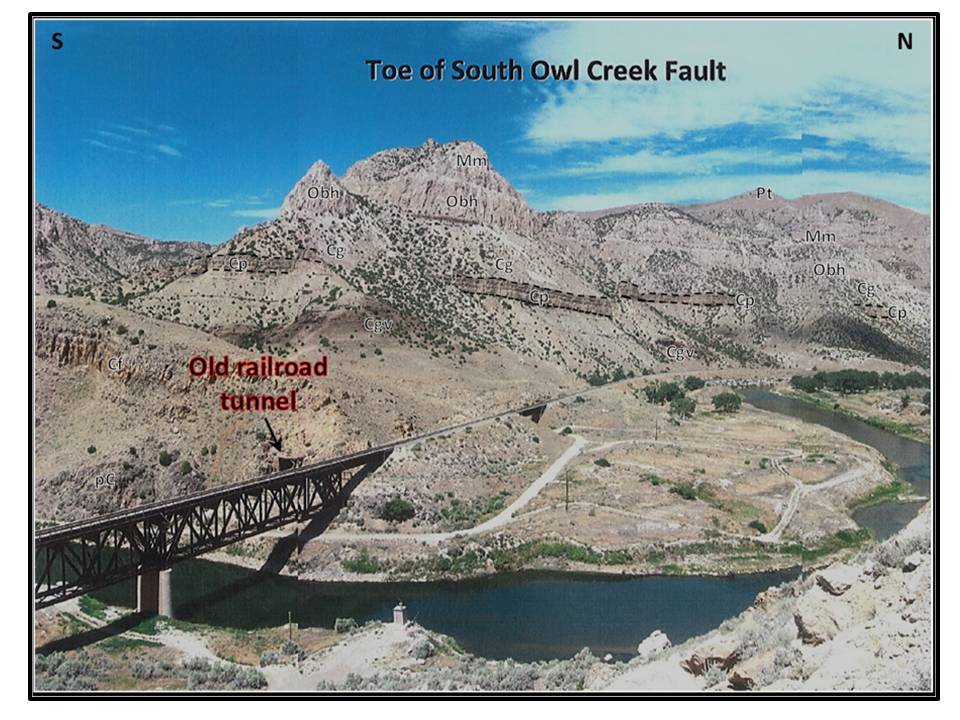 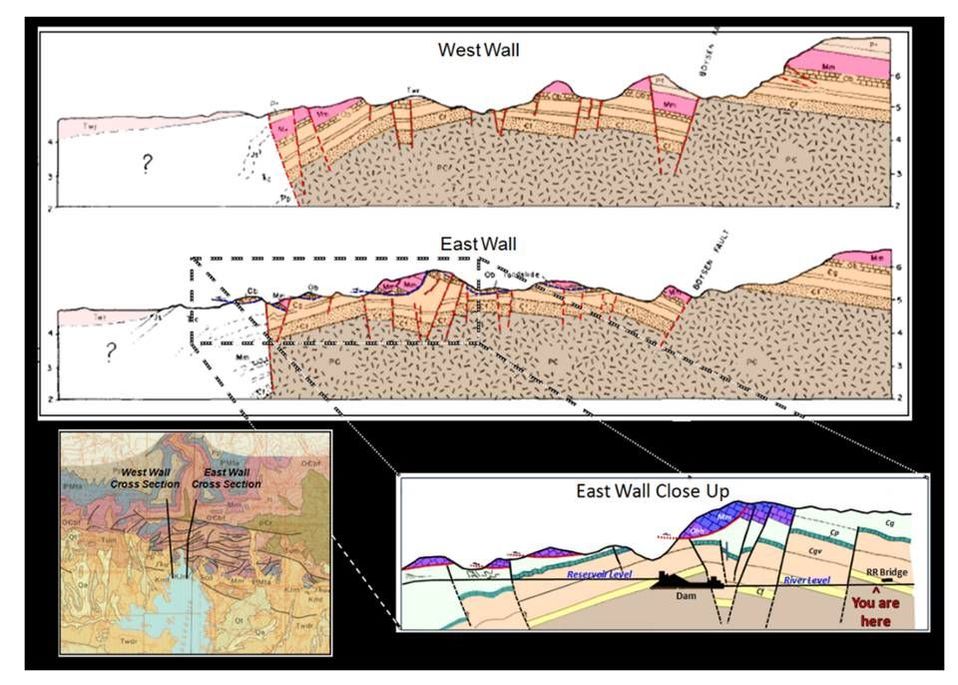 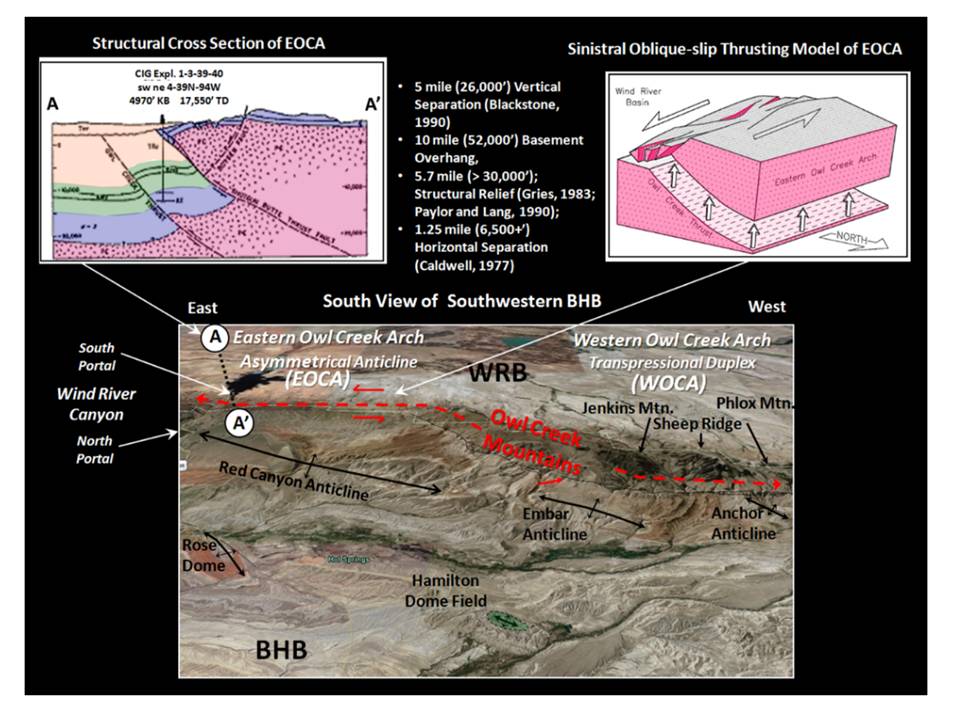 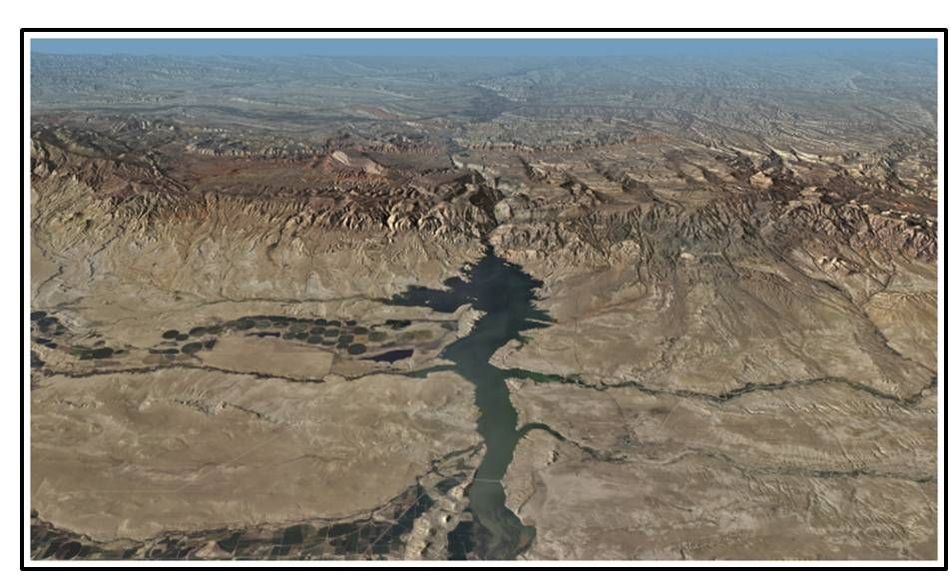 North aerial view of Boysen Reservoir and the south portal of the Wind River Canyon “Crack in Time.”

Things To Do In Wind River Canyon & Thermopolis Area

The Wind River Canyon is on the Wind River Indian Reservation, so public access in the Canyon is restricted to the pullouts next to the highway.  Our recommendations for fun things to do include fishing & rafting, and visits to Anchor Dam, Dinosaur Marbles, Thermopolis Hot Springs and the Wyoming Dinosaur Center.

Fishing & Rafting – You can fish the river in the Canyon from the shore with a Wind River Tribal Fishing/Trespass Permit and the annual Recreation Stamp which you can buy in Thermopolis.  Another option is guided whitewater rafting and fishing trips in the Canyon run by Wind River Canyon Whitewater & Fly Fishing also located in Thermopolis.  Just north of the Canyon and north of the Reservation, starting at the Wedding of the Waters public access, you can float and/or fish the Big Horn River.  From Wedding of the Waters to Thermopolis, the river is flanked by private land, thus you will need a boat/raft or a guided trip to access this stretch.  Inquire in town about river takeout options, river flows, and hazards which include low bridge clearance.  Fishing this section requires a Wyoming Game & Fish license which you can also buy in Thermopolis. 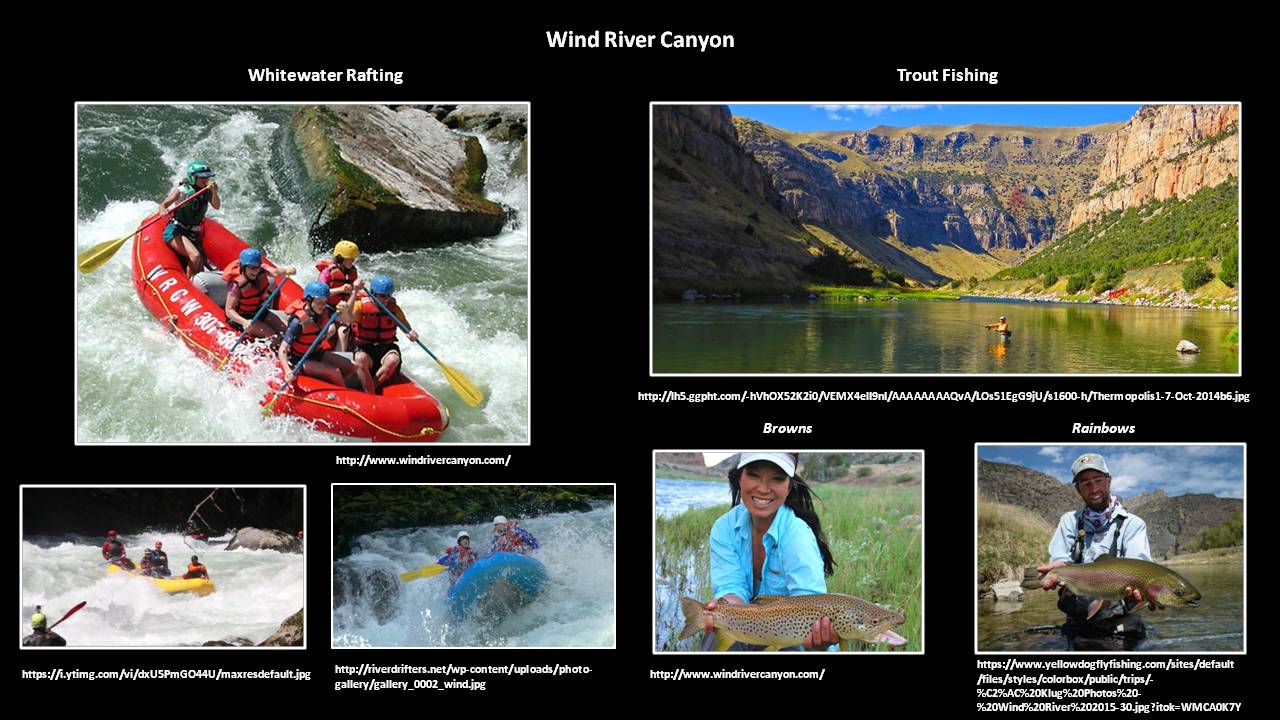 Hot Springs State Park – Within the state park there are trails to the river, springs, terraces, and overlooks.  There is the State Bath House and two hot mineral water commercial swimming facilities at Hellie’s Tepee Pools and Star Plunge. 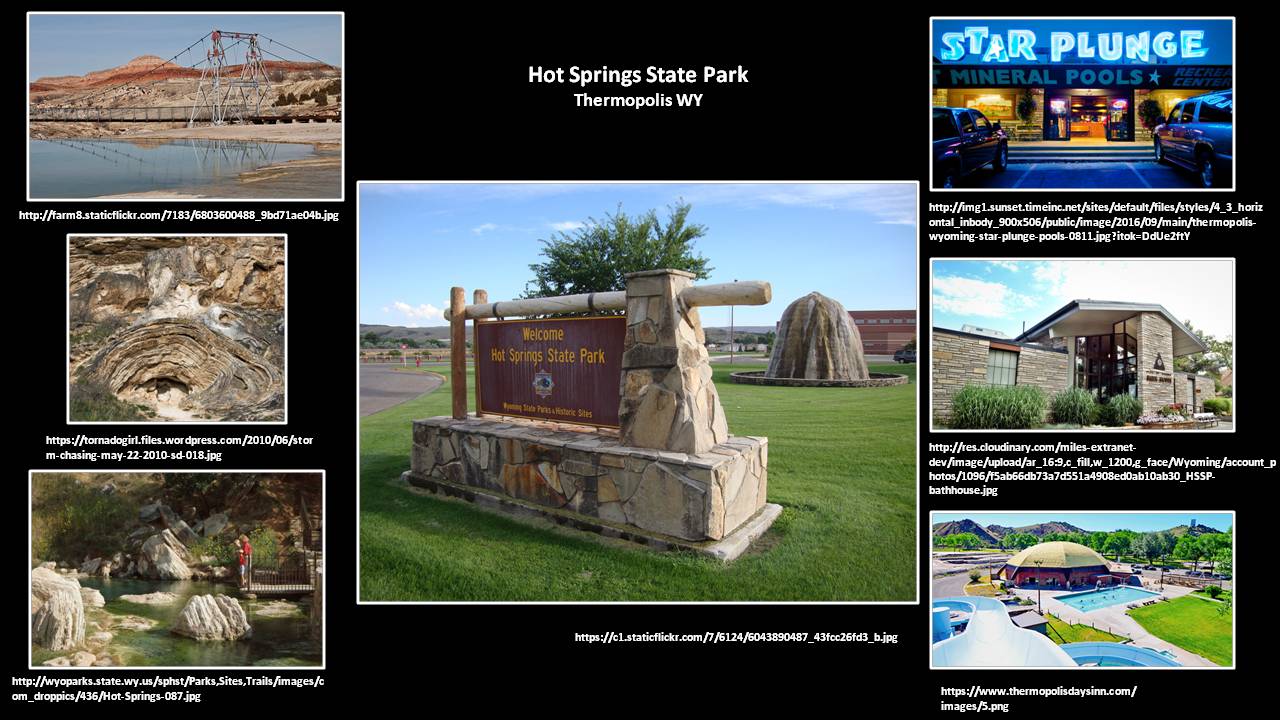 Wyoming Dinosaur Center – In addition to dinosaur exhibits and the bone preparation lab, they have a fine museum with a wide variety of fossils over geologic history displayed in a “Walk Thru Time”.  From late-May through mid-September, they offer tours of the dig site and a “Dig For A Day” program where you can help them dig in the dinosaur bone beds. 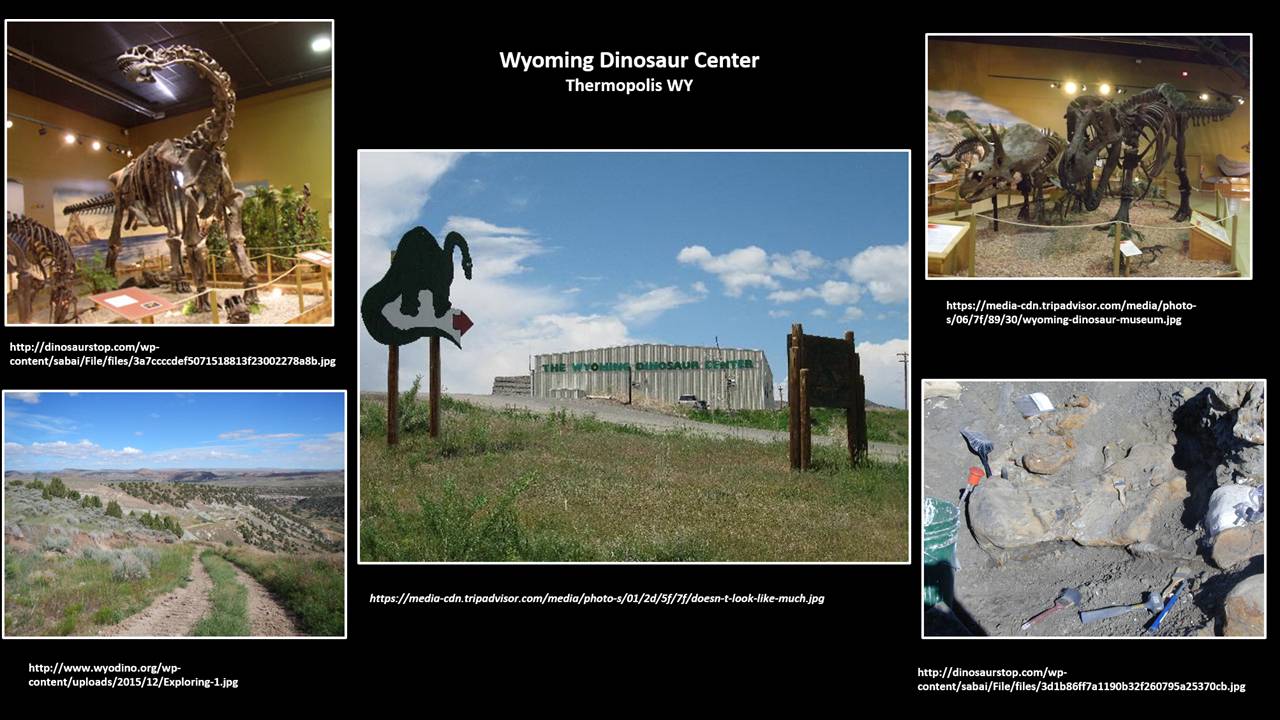