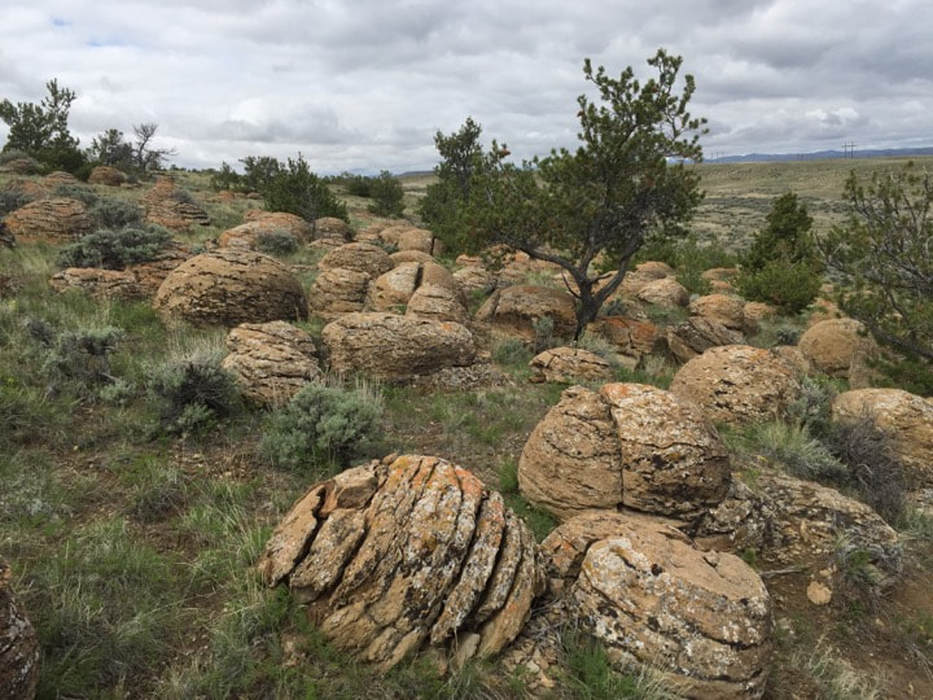 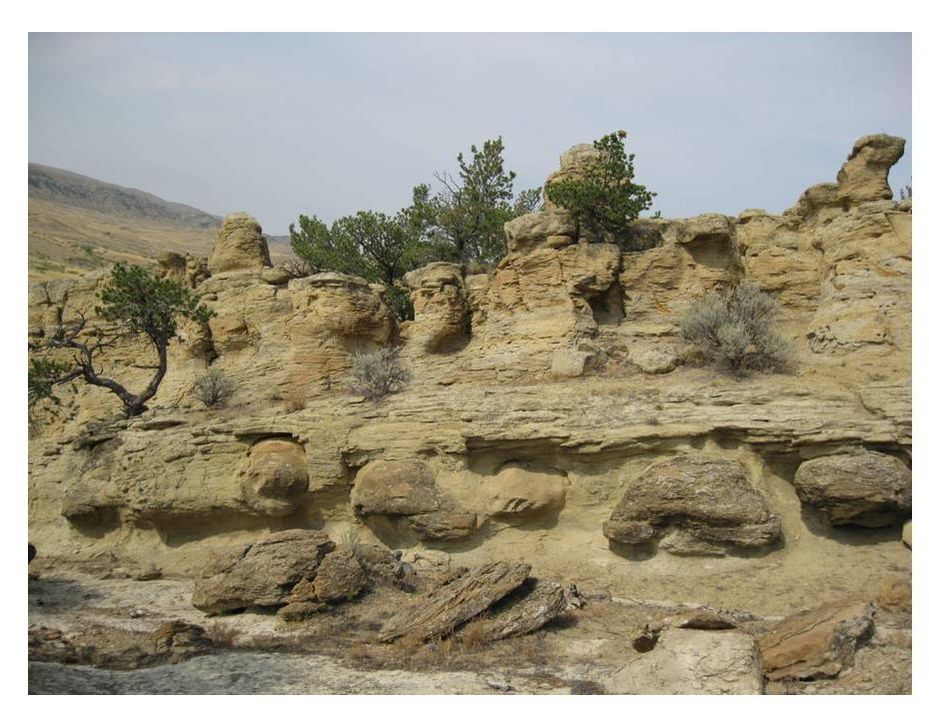 A field of giant spherical boulders that are calcite cemented sandstone concretions.  Formed in the shallow subsurface during the Cretaceous, they are unusual for their large number, impressive size and concentration in a football field sized area.​

Geologic features are often given descriptive non-scientific names by local people. Spheroid-shaped stones have been erroneously interpreted as fossil plant, animal or alien lifeforms. Terms like seed pod, dinosaur egg or an extraterrestrial cocoon have been applied. Sometimes they resemble marbles, golf balls, shot-puts, bowling balls or cannon balls depending on their shape and size. They have also been attributed to a race of giants, with legendary character names added such as Paul Bunyan or Pecos Bill.

Not to be outdone by non-professionals, we call the spheroid-shaped features seen on the north nose of the Thermopolis Anticline, "Dinosaur marbles." They are concretions developed in the Late Cretaceous Frontier Formation. This formation was deposited near the end of the age of dinosaurs.

Author's suggested origin of Late Cretaceous Frontier Formation concretions on Thermopolis Anticline.
Dinosaur Marbles cartoon by Ken Steele
Concretion image: Fisher, M., 2017
The concretion field encompasses an area of about 0.65 acres (one-half a football field) on the north nose of the Thermopolis Anticline about a mile east of Wyoming Highway 120, off a dirt road. The Thermopolis Anticline is a 30-mile long fold created by Laramide compressional tectonics about 70 million years ago. The fold is oriented northwest-southeast, asymmetrical with the steep flank to the southwest (see structural cross section 3 below). The anticline is segmented into three pieces by left lateral tear faults aligned parallel to the cross cutting streams. The concretions are developed in an upper sand of the Late Cretaceous Frontier Formation (89 to 97 million years ago). 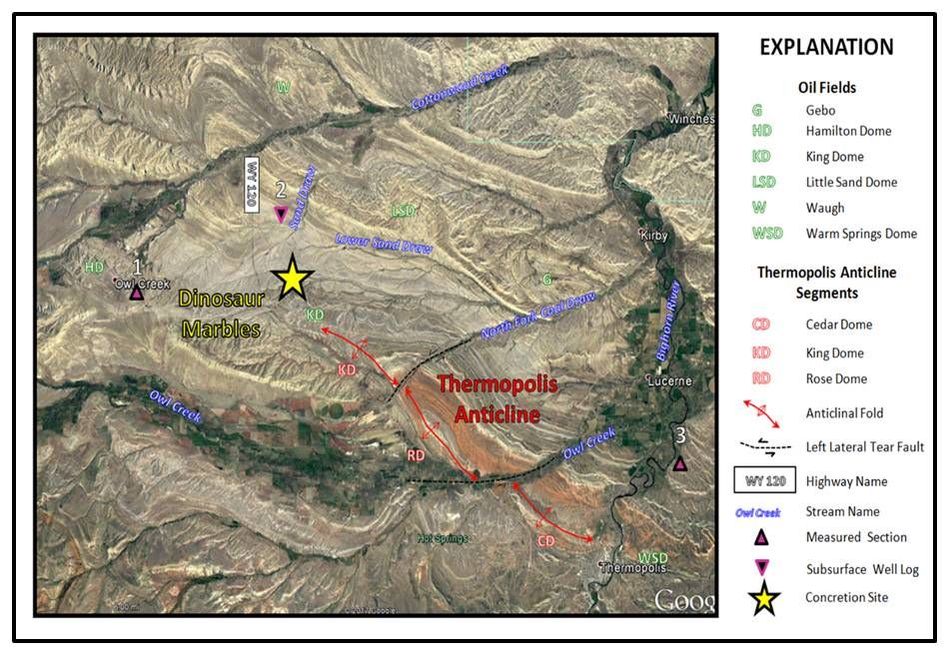 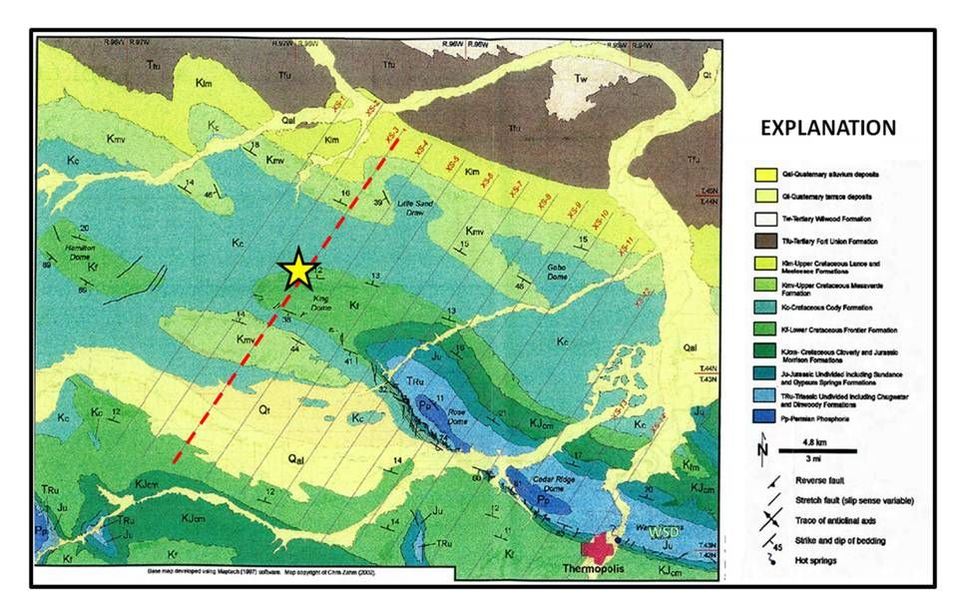 Structural cross section 3 over Thermopolis Anticline.
Image: Zahm, C.K., 2002, 3D Strain and Basement Involved Folding, Thermopolis Anticline, Wyoming: Ph.D. Dissertation Colorado School of Mines, Fig. 6-7, p.150.
A concretion is a feature formed during diagenesis (physical and chemical changes occurring during the conversion of sediment to sedimentary rock). As sediments are buried by younger sediments they undergo compaction. Mineral bearing fluids move through pore spaces and deposit cement, often on a piece of organic matter. Due to the good porosity and permeability of sand, the cement grows outward in three dimensions from the original point of cementation. This creates a spheroid-shaped area of harder cemented rock that is more resistant to erosion than adjacent areas. Thus, the concretions did not exist on the surface as “marbles”.  They formed in the subsurface by cementation. The diagrams below illustrate two models for carbonate concretions and how bedding can indicate concretion growth versus the timing of sediment compaction. 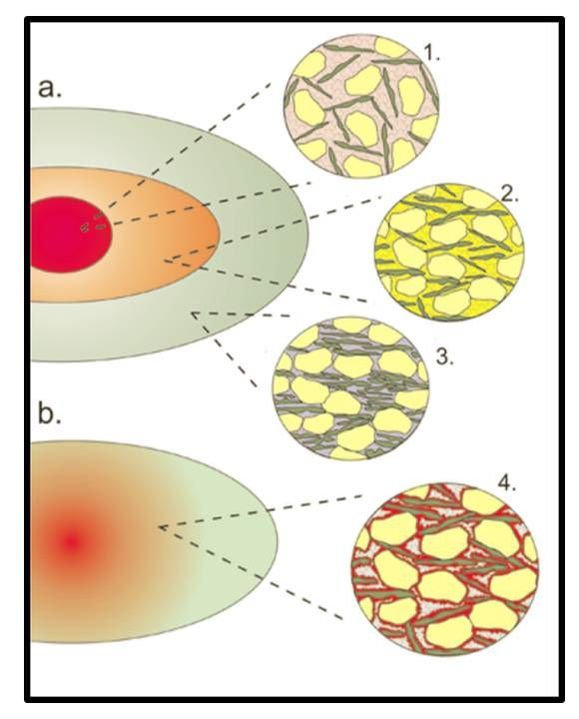 Diagram illustrating two different models for concretion growth (a. and b.). The cartoons on the right (1–4) illustrate differences in microfabric which can be seen in thin section (rounded grains represent silt-sized quartz or feldspar and elongate, dark green, grains represent clays). a. Simple concentric growth where the concretion has grown in discrete stages (differently colored ‘cements’) from the center outwards. The different orientation and distribution of the grains in 1, 2 and 3 demonstrate that the concretion grew at three discrete times during compaction. Note that there is much more carbonate (pink) between the grains in the early zone (1) than (blue) in the zone which formed after compaction. The second concretion (b. 4) has a mixed fabric resulting from incomplete cementation by a first generation of carbonate (red) and later cementation by a second generation (blue). The body of the concretion will have a mixed fingerprint with samples containing both cement types.
Image: Marshall, J. and Pirrie, D., 2013, Carbonate concretions—explained: The Geologists’ Association & The Geological Society of London, Geology Today, Vol. 29, No. 2, Fig. 7, p. 56; https://www.researchgate.net/publication/264455545_Carbonate_concretions-explained 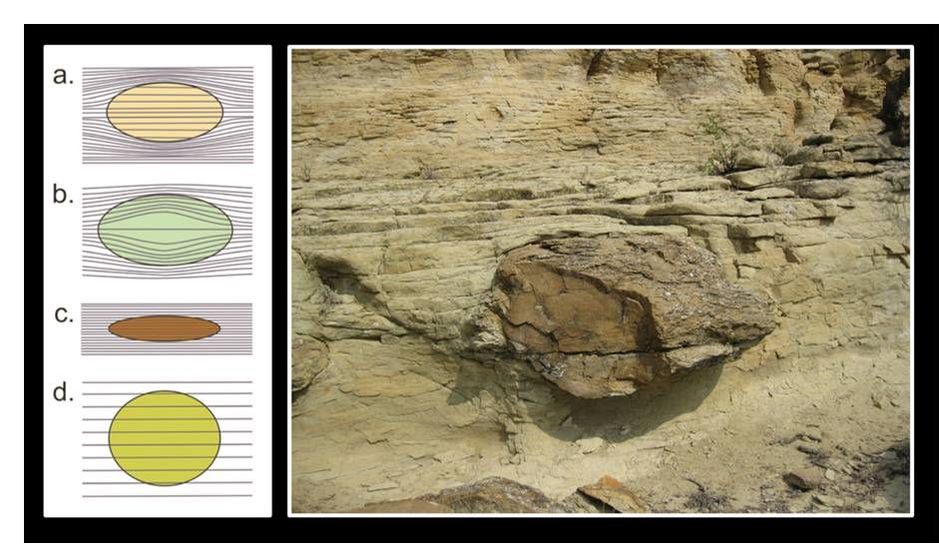 Left: Diagram showing how field observations can allow us to work out the timing of concretion growth relative to sediment compaction. Ellipses represent the outer margin of the concretion. In all cases the layers were initially planar horizontal bedding or lamination and can be traced through and around the concretions: a. early diagenetic concretion formed before compaction. b. early diagenetic concretion which continued to grow during compaction (layers are deformed inside and outside the concretion); c. and d. represent concretions that formed after compaction. Ovoid concretions (c.) are more common in mudstones whilst more spherical bodies (d.) occur in sandstones. This reflects the differences in horizontal and vertical permeability in the different sediment types. Right: Image of concretion showing (b) sediment compaction, weathering from outcrop.
Images: Left: Marshall, J. and Pirrie, D., 2013, Carbonate concretions—explained: The Geologists’ Association & The Geological Society of London, Geology Today, Vol. 29, No. 2, Fig. 8, p. 57; https://www.researchgate.net/publication/264455545_Carbonate_concretions-explained ;  Right: Fisher, M., 2017 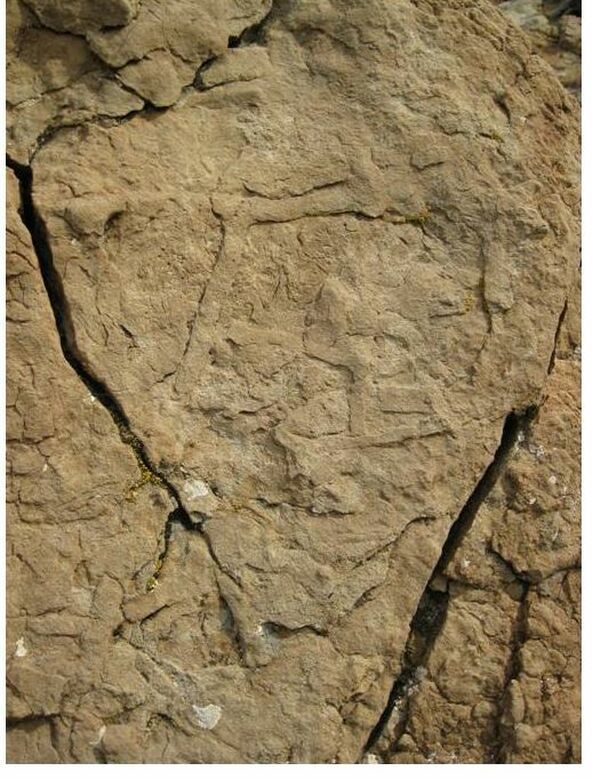 Burrow traces in the interior of concretions at Dinosaur Marbles. Concretions commonly form around the organic remains of plants and animals.  No fossils or organic matter were observed in the Dinosaur Marble concretions, but they are riddled with burrows, also known as trace fossils. These may be shrimp burrows.
Image: Fisher, M., 2017

During the Late Cretaceous abundant sediment eroded from the Sevier Highlands and was transported eastward by streams flowing into the Western Interior Seaway. These sands accumulated in a complex of deltaic, beach and shallow marine environments. The Frontier Formation sands are sediments derived from the late movement on the Willard and Meade Thrusts, and during early movement on the Crawford thrust. 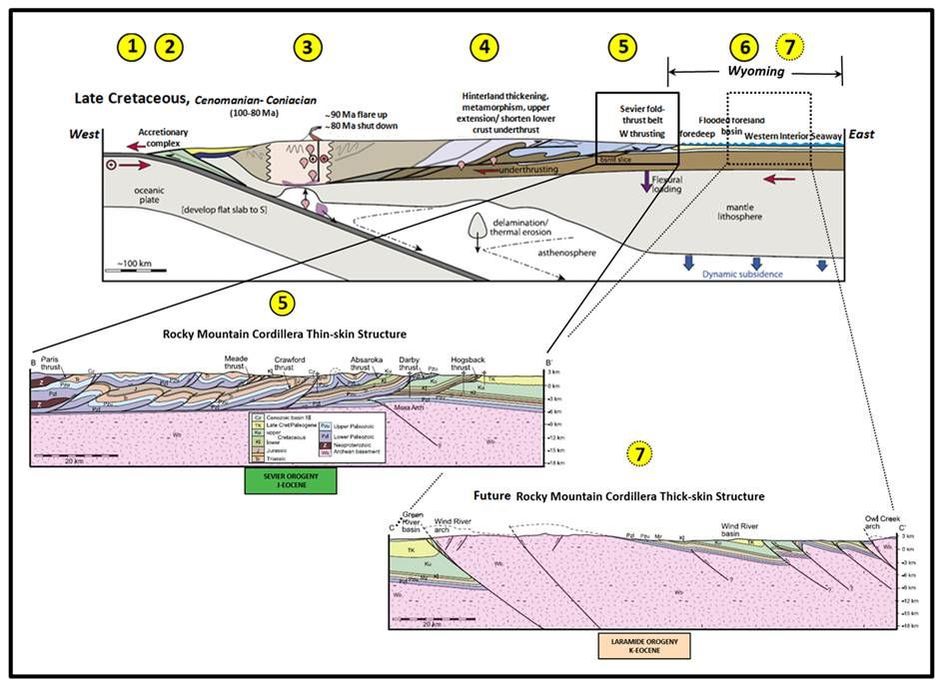 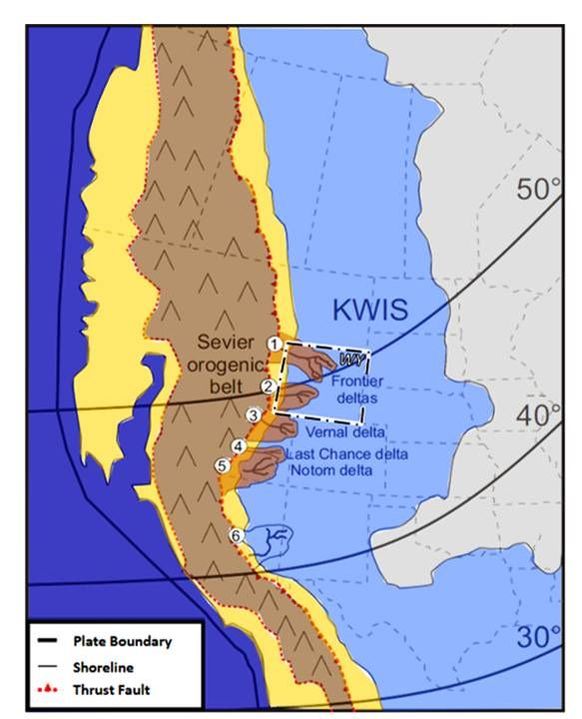 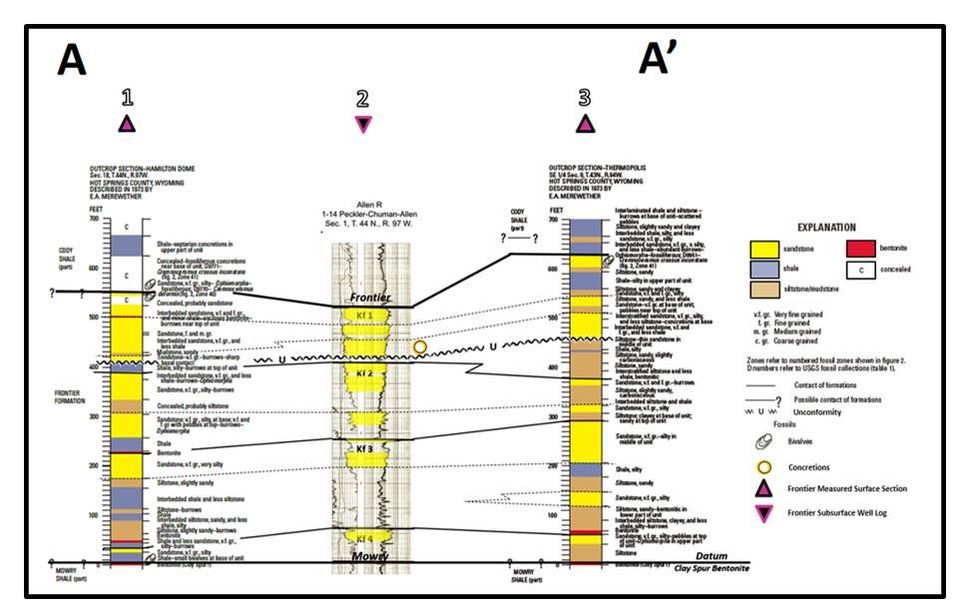 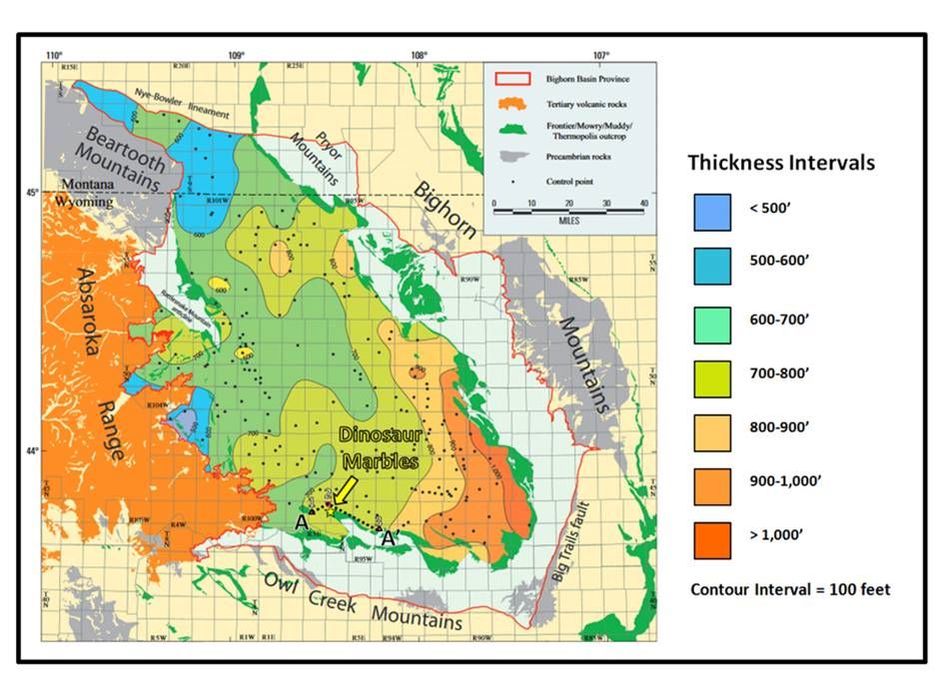 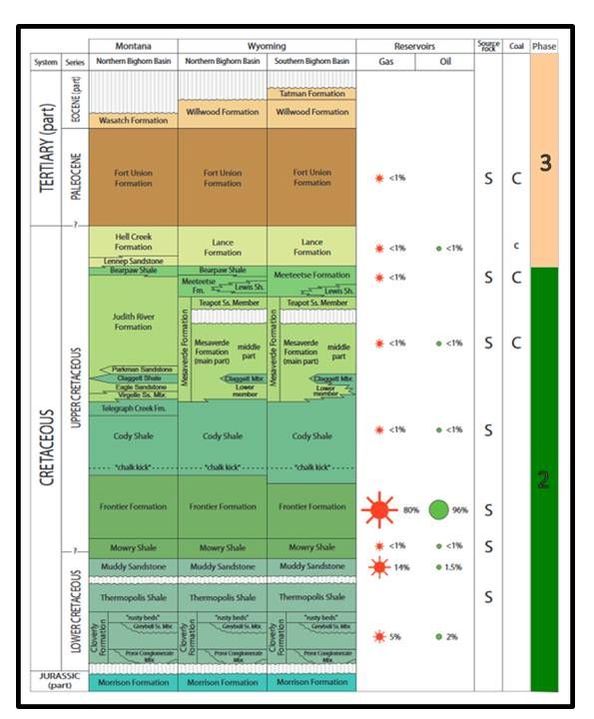 Stratigraphic chart showing Cretaceous and Tertiary reservoir production percentages and source rocks within the Bighorn Basin. The source rocks in the Cody, Mesaverde, Meeteetse and Fort Union are poor quality and have not generated much hydrocarbons. Most of the Frontier oil and gas was sourced from the adjacent Mowry Shale. The Cretaceous and Tertiary reservoirs have produced about 4 percent of cumulative oil and 50 percent of cumulative gas in the basin. Most of the oil in the basin has been produced from the older Phosphoria, Tensleep and Madison.
Image: After Finn, T.A., Kirschbaum, M.A., Roberts, S.B., Condon, S.M., Roberts, L.N.R. and Johnson, R.C., 2010, Cretaceous–Tertiary Composite Total Petroleum System (503402), Bighorn Basin, Wyoming and Montana: Chapter 3 of Petroleum Systems and Geologic Assessment of Oil and Gas in the Bighorn Basin Province, Wyoming and Montana, U.S. Geological Survey Digital Data Series DDS–69–V, Fig. 7, p. 10;
https://pubs.usgs.gov/dds/dds-069/dds-069-v/REPORTS/69_V_CH_3.pdf
Concretions, within the Frontier Formation and stratigraphically equivalent units, occur in many places throughout the Rocky Mountains and Great Plains. They are often developed as tourist stops. Here on the north nose of the Thermopolis Anticline is an undeveloped geologic site. The “marbles” still lie where the dinosaurs left them. 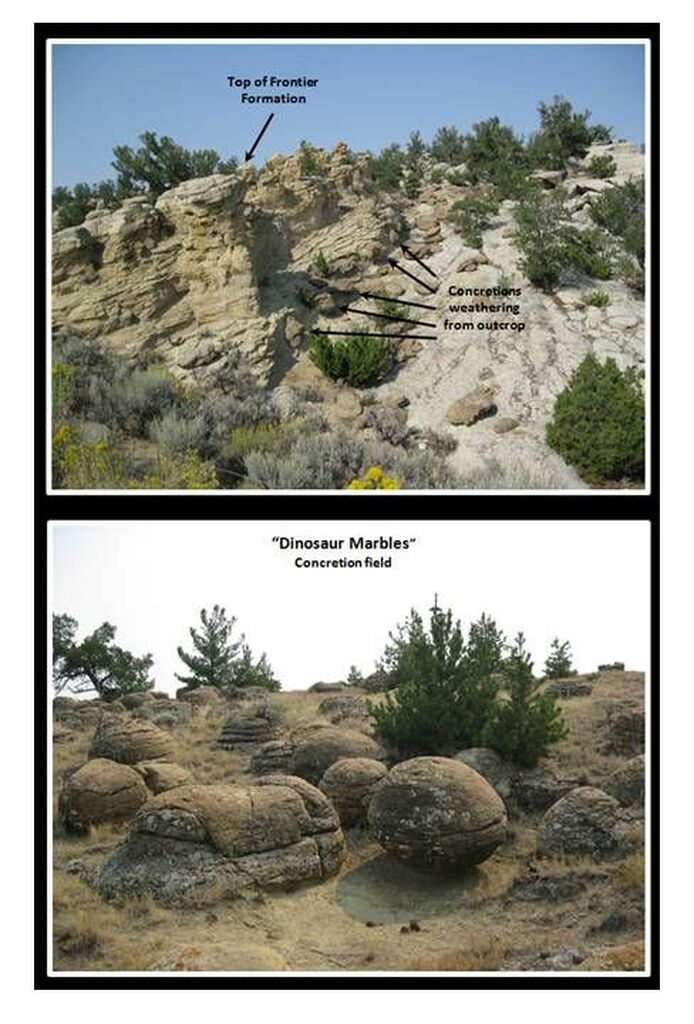 What You Will See At Dinosaur Marbles

The marble field is interesting and if you like geology, you will also want to check out the concretions embedded in the Frontier Sandstone next to the highway. The dirt road to the marble field requires a high clearance vehicle, but not 4WD on the day we drove it. Do not drive this road if it is wet. If you would rather walk, it is a flat and easy 0.9 miles each way from the highway. The Dinosaur Marble field, the dirt road, and the Frontier Sandstone outcrops near the highway are all on federal BLM and open to the public. 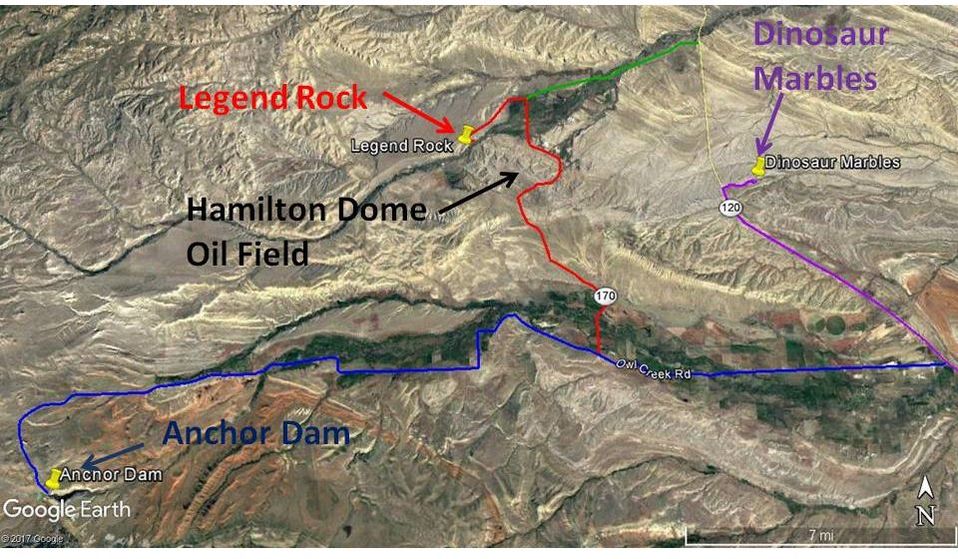 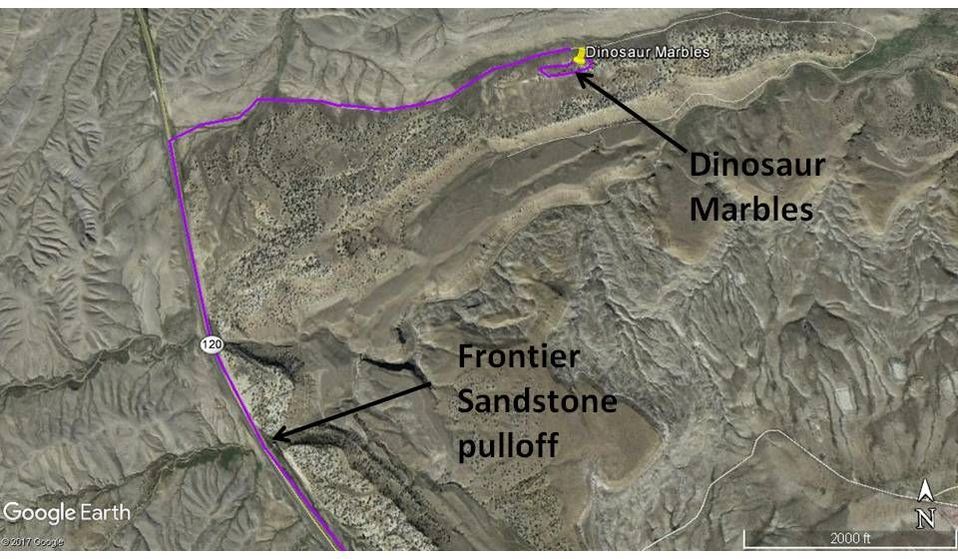 Things To Do At Dinosaur Marbles

In addition to the visit to Dinosaur Marbles, we recommend you visit Anchor Dam and take the side trip to see the petroglyphs at Legend Rock. It is a pretty and peaceful drive to Anchor Dam. There is a small campground on the west side of Anchor Reservoir. There are additional geological sites in the Owl Creek drainage that we have not visited, but are shown in the picture montage at the end.

​It has over 300 individual petroglyphs in 92 panels mainly in the Dinwoody tradition.  Made during the past several thousand years, the figures include pecked animals, people and people-like features. There is a one-third mile loop trail with 15 numbered petroglyph stops along a cliff of Cretaceous Frontier Sandstone. The trail and cliff is next to Cottonwood Creek with the Hamilton Dome Oil Field just across the creek on the adjacent hill. Legend Rock is open May through September, 8 am to 6 pm.  Access from October through April requires a key that can be picked up in Thermopolis at the State Bathhouse. 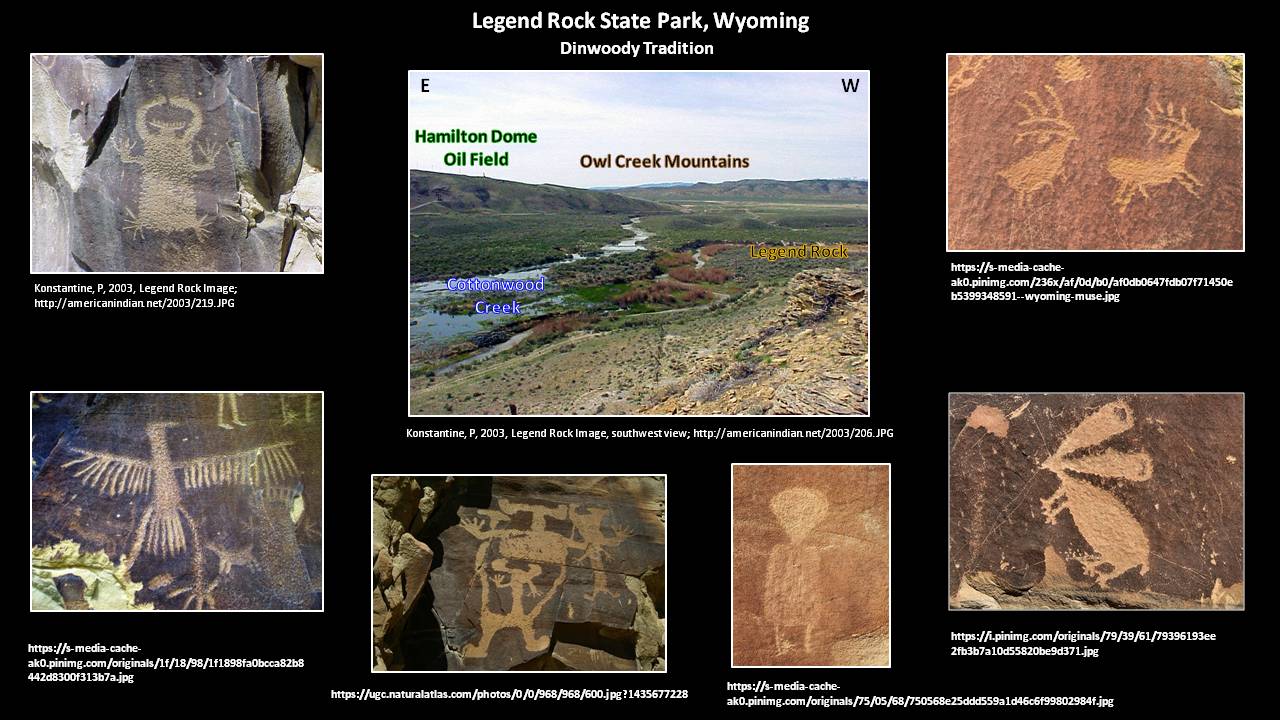 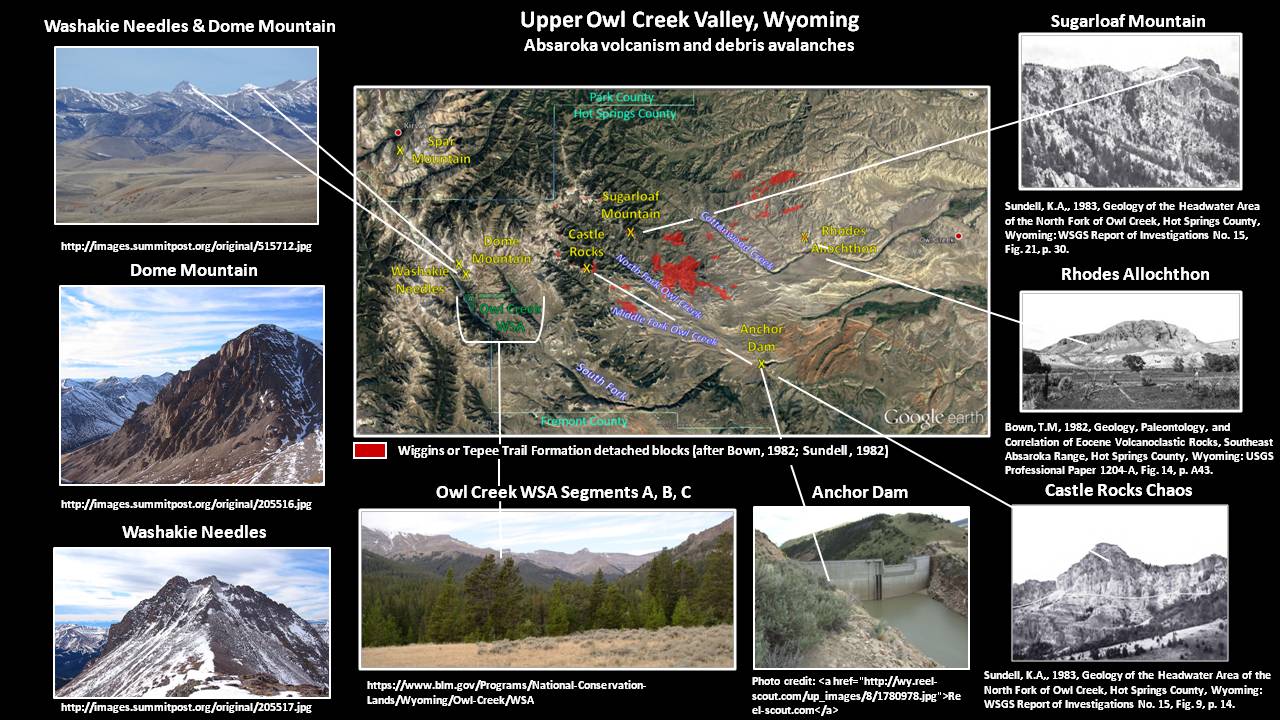