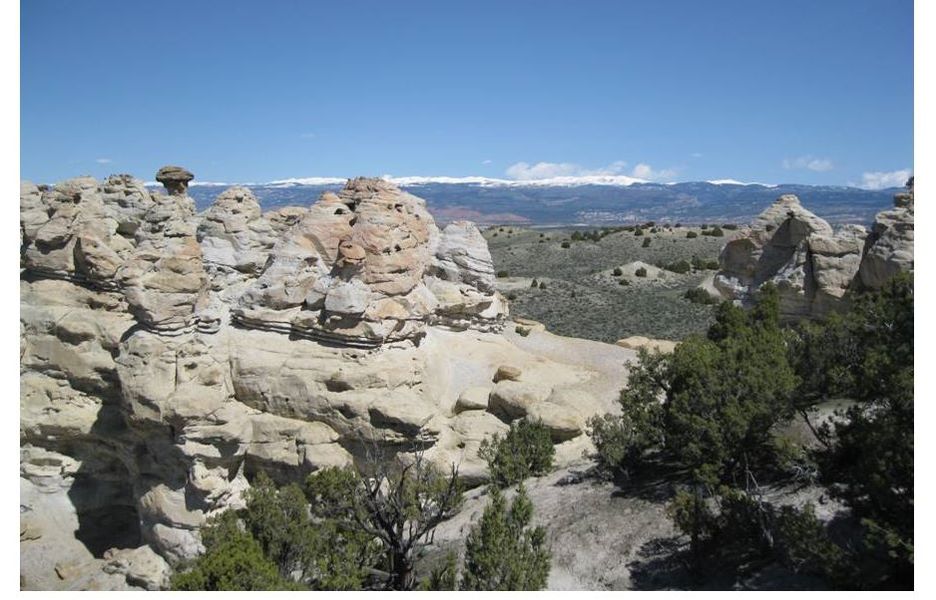 PDF Castle Gardens (9.5 MB)
Attraction:
Sandstones eroded into scenic hoodoos, windows, gulches, cliffs, pedestals and mushroom caps.  Nice, small BLM picnic/campground facility in a secluded location with opportunity to take undefined exploration hikes on ridges and in the adjacent valley.
​
Geology of Castle Gardens
Castle Gardens is an area of badlands topography seven miles southwest of Tensleep, developed in the upper Cretaceous Teapot Sandstone Member of the Mesaverde Formation. The distinctive mainly white sands of the Teapot Member present a landscape of cliffs and towers that resemble the ramparts of a medieval castle.

This Castle Gardens in Washakie County is not to be confused with the Castle Gardens Petroglyph site about 60 miles south in the Wind River Basin, Fremont County. 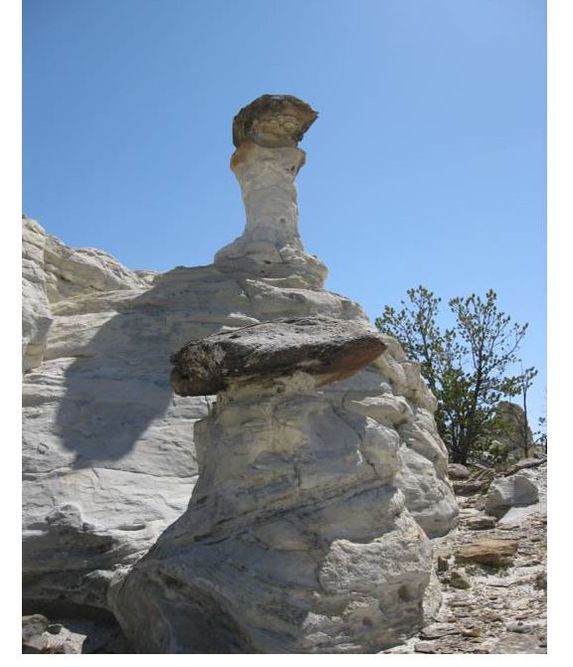 Teapot Sandstone in shape of mushroom caps
Image: By Mark Fisher
The Mesaverde Formation in the Bighorn Basin is composed of sandstone, siltstone, mudstone and coal deposited in the distal or eastern side of the Sevier Foreland Basin at the margin of the Western Interior Seaway. The formation underlies the Meeteetse Formation and interfingers with, and overlies the Cody Formation. Regionally the strata thin from west to east, and from north to south. The Mesaverde becomes more marine to the east and more continental to the west. 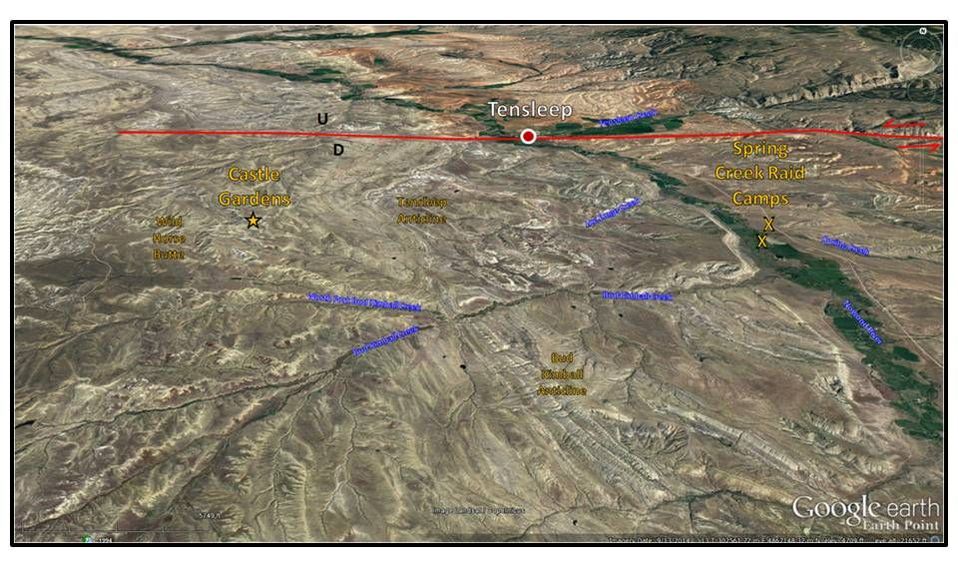 North aerial view of Castle Gardens Scenic Area. Spring Creek Raid wagon locations shown with “X.”
Image: Google Earth
The Mesaverde can be subdivided into four units: upper (Teapot Sandstone), middle, Claggett, and lower members. The lower member is a regressive (sea level fall) sandstone. The Claggett member is a offshore shale tongue of the Cody Shale that separates the middle and lower Mesaverde members. The middle member is a mixed clastic sequence of sandstones, siltstones, mudstones and coals deposited as the Western Interior Seaway retreated to the east. An unconformity (erosion surface) separates the upper and middle units. The uppermost member is the Teapot Sandstone which is a nonmarine unit throughout most of the basin. Hummocky bedding in the southeastern Bighorn Basin suggests that the unit becomes marginally marine here. 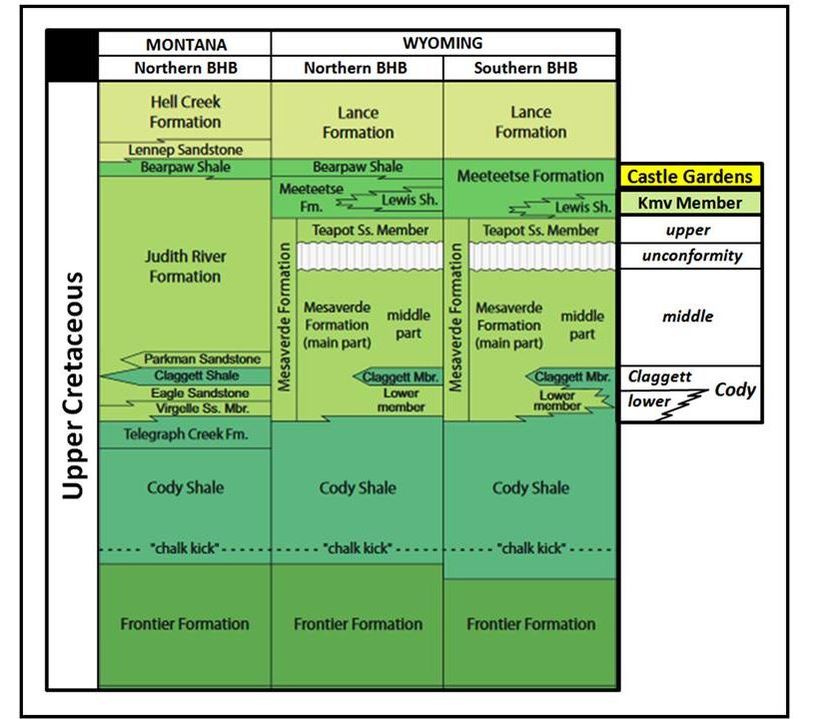 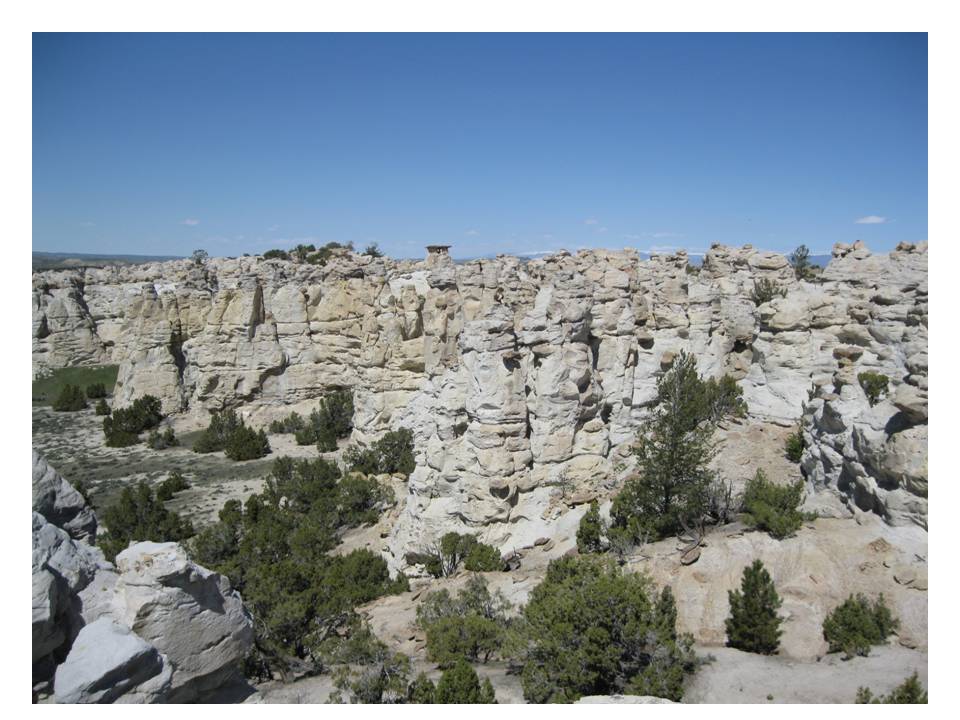 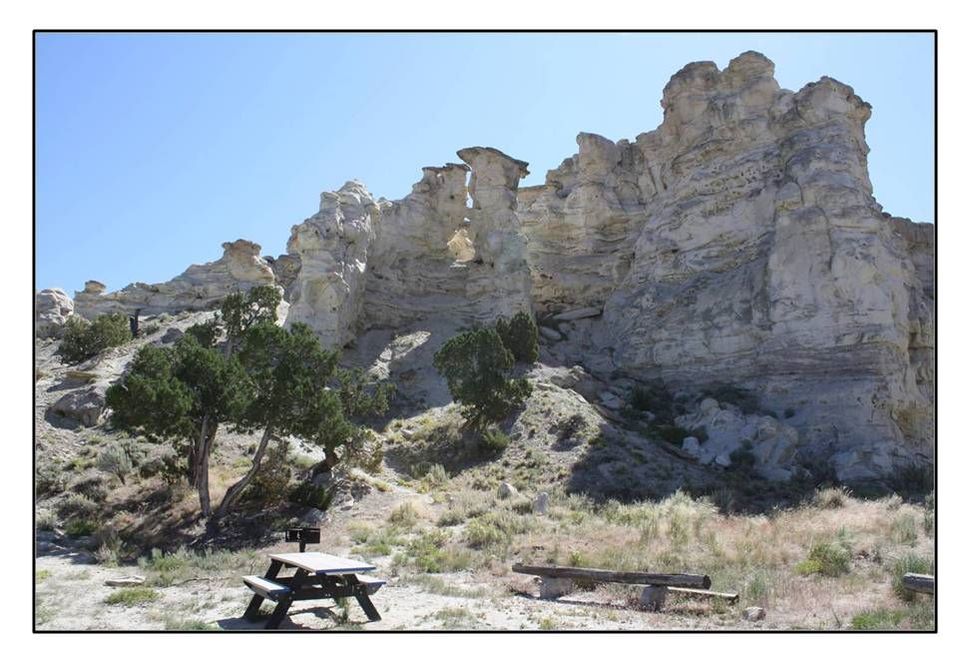 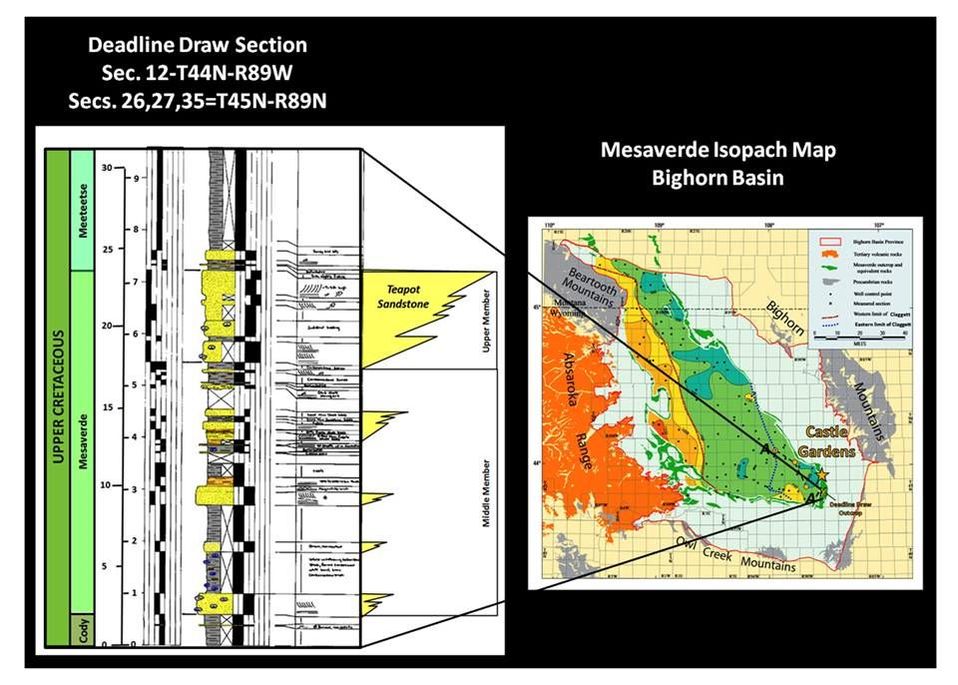 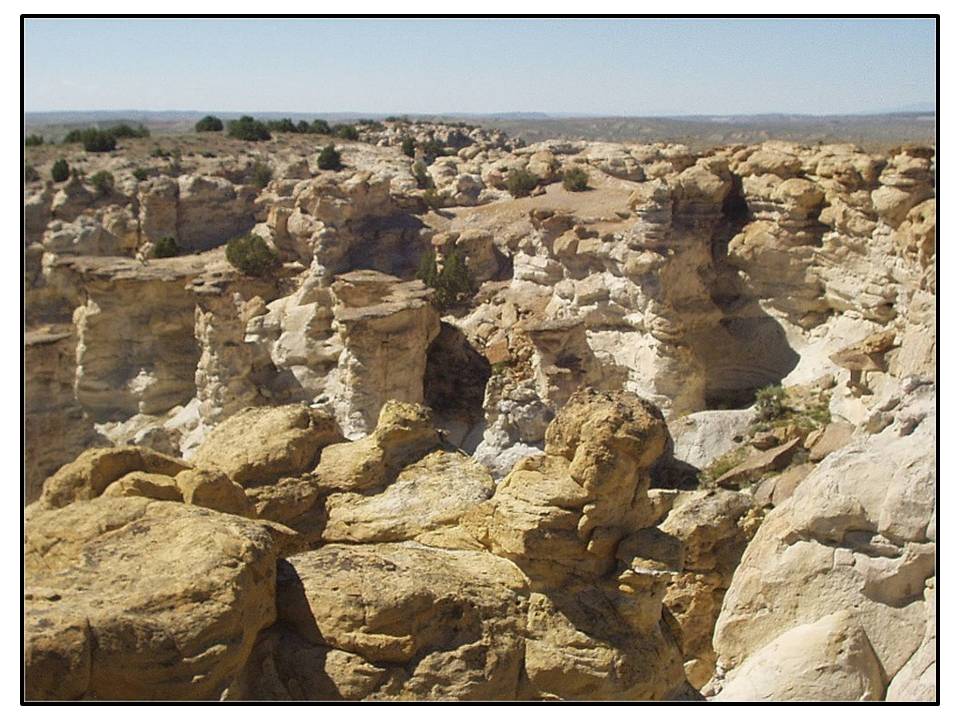 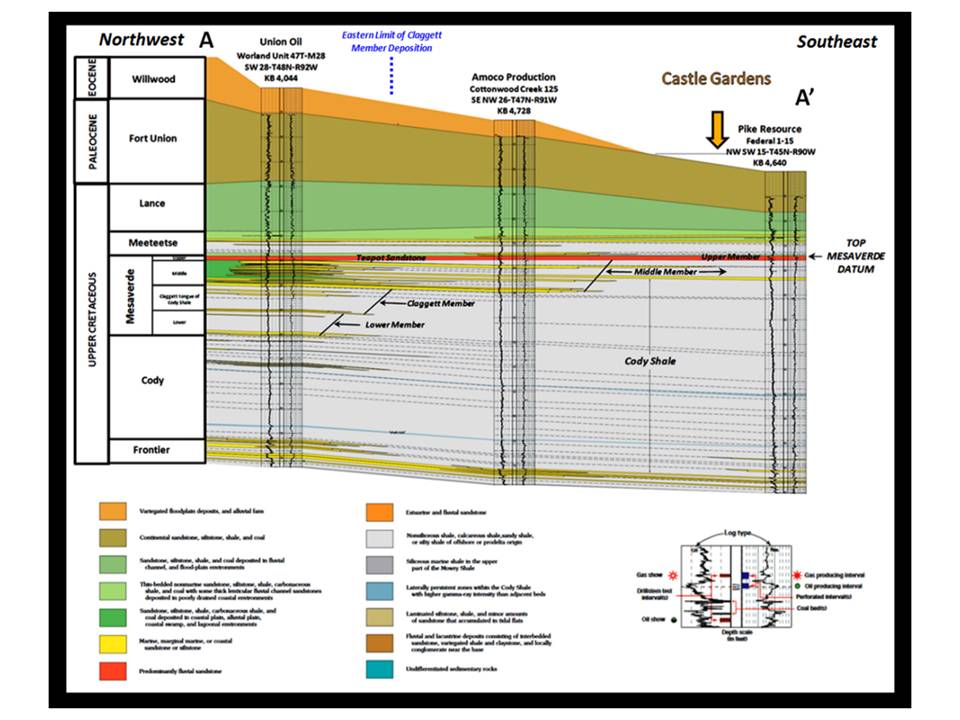 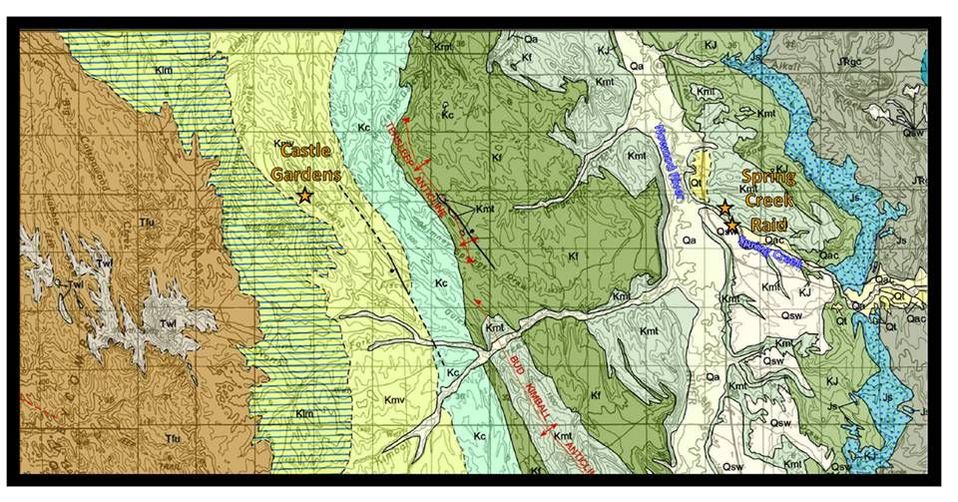 The war between cattlemen and sheepherders was severe in the Bighorn Basin. The cattlemen believed they had a first right to grazing on public land due to their priority of presence. Cowboys viewed themselves as medieval knights riding the range. They also believed that sheep poisoned the land for cattle. They often referred to sheep as “range maggots” or “wooly locusts.” Those that herded them were disparagingly called “mutton punchers,” “lamb lickers,” or “snoozers.” Both real and imagined problems led to violent conflict. But the main problems in the Bighorn Basin, and throughout the west, were overgrazing and no management of the public lands. There are two requirements to maintain a healthy range:
1. Total plant food + water on range must be > (food + water to maintain plants) + (food + water needed by grazing animals)
2. Management required to keep the equation balanced
​
In 1905 the U.S. Congress established the Forest Service from the earlier Timber Reserves to manage public lands reserved as national forests. They created a system of regulations that included permits, herd limits, grazing seasons and fees. But the open range of the non-forest public lands continued to deteriorate until passage of the 1934 Taylor Grazing Act.

The cattlemen established “deadlines” to set grazing boundaries between cattle and sheep on the unmanaged public lands. The word “deadline” originated in the American Civil War at Andersonville Prison (Fort Sumter) in southwestern Georgia. A light fence was placed about 19 feet from the stockade walls. Anyone crossing or touching the line could be shot.

Deadline at Andersonville Prison. Left: NPS Historic photo from August 17, 1864. Right: Detail from survivor Thomas O’Dea’s drawing.
Images: Left: https://upload.wikimedia.org/wikipedia/commons/f/fc/Andersonville_pow_tents_photo.jpg; Right: https://www.nps.gov/media/photo/gallery.htm?id=8D47CC1C-1DD8-B71C-07AF929987E6B3A5
​The deadline in the Bighorn Basin used streams, hills, valleys, and roads to mark the boundary. Sometimes, as at Deadman Draw, a furrow was plowed or signs were posted. Between 1879 and 1909, Wyoming had about two dozen raids on sheep camps with six sheepmen, several dogs and 18,000 thousand sheep killed. Several thousands of dollars of property had also been destroyed. Tensions were high. 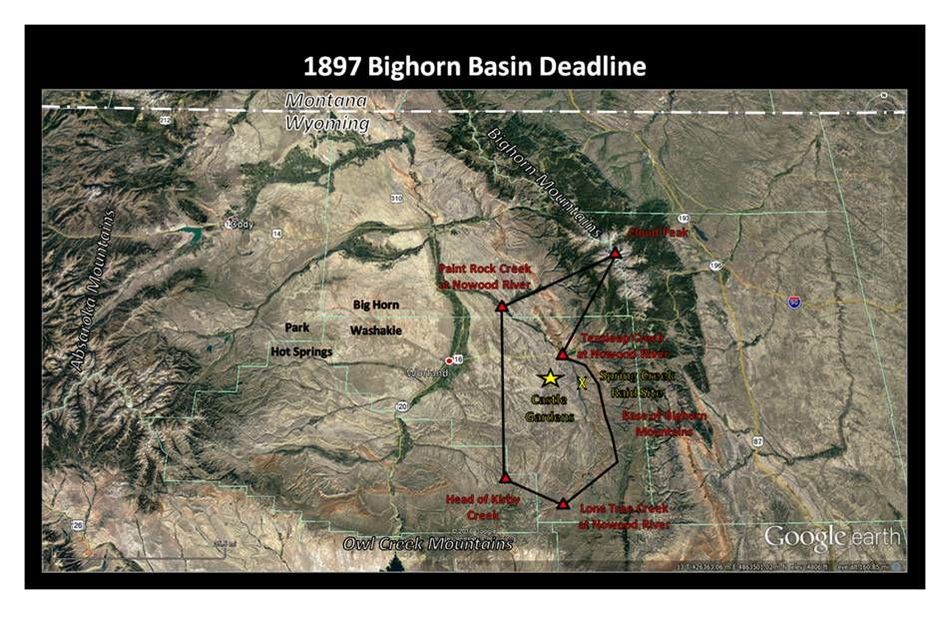 The Bighorn Basin 1897 Sheep Grazing deadline. Castle Gardens is located in the center of the area. Location of Spring Creek Raid shown by yellow “X”
Image: Google Earth; Data: Davis, J.W., 1993, A Vast Amount of Trouble: A history of the Spring Creek Raid: University Press of Colorado, Niwot.
Joe Allemand and his partner, former cattleman Joseph Emge, chose to cross the established deadline to take their herd from their ranches on Spring Creek to winter pasture near Worland in 1908-1909. Ironically, Allemand was well liked by the community as a whole, homesteaders, sheepmen and cattlemen. Emge on the other hand helped plow some of the deadlines and reportedly was involved in some early raids on sheep camps. He was viewed as a traitor by some of the cattlemen. They had a local deputy sheriff for protection on the drive to Worland. They did not have a lawman accompany them on the return. After five days they were back on their side of the deadline at a camp along Spring Creek. That night seven masked men attacked while the sheepmen, feeling safe, slept. They killed three men, four dogs and at least 25 sheep. The wagons and the dead men were soaked with kerosene and burned. The population was outraged and the Wyoming Wool Growers’ Association offered a large reward. The National Wool Growers’ Association, The State of Wyoming and Big Horn County (Washakie County was not established until 1911) also offered cash to bring the perpetrators to justice. Before this event, no cattleman had been convicted in Wyoming for violence against sheep or their herders.

The seven raiders were identified and brought to trial. Two of the raiders turned on the others for immunity. The other five were convicted and sentenced to time in the Wyoming Penitentiary. This was the last murderous episode of the cattle-sheep wars in Wyoming.
​
The Wyoming Department of Transportation has placed a roadside sign and monuments marking this site. Joe Emge has a nearby creek named after him. A short video of the raid from the University of Wyoming Extension: https://www.youtube.com/watch?v=flVenx-hHks. 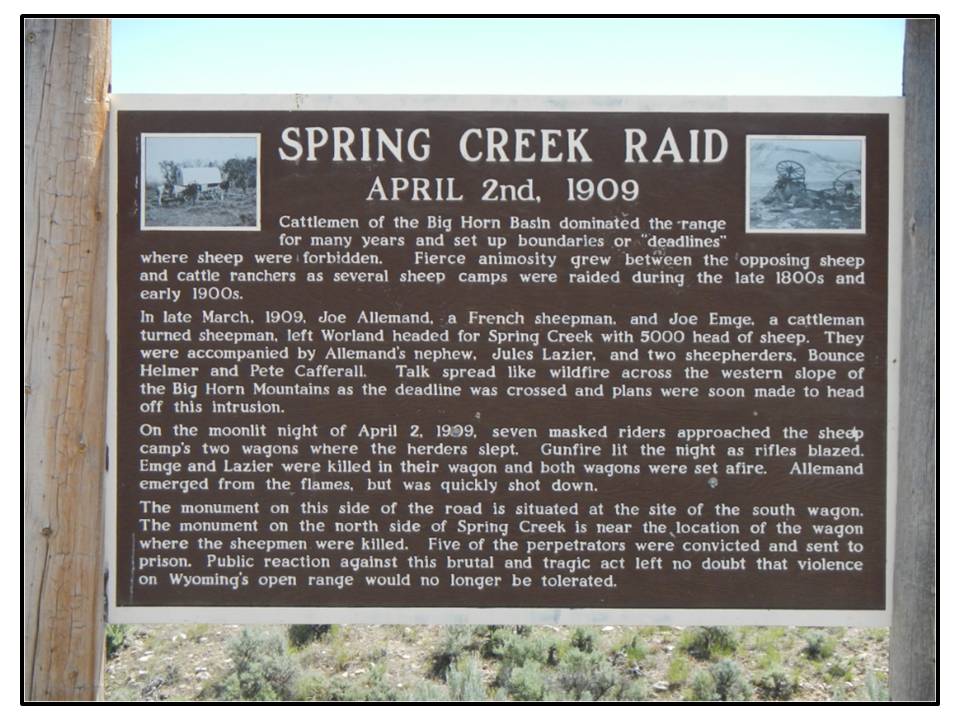 What You Will See At Castle Gardens

A 20 minute drive from Tensleep on paved and mostly gravel road that can easily be accessed with a passenger vehicle.  There are four campsite/picnic sites with grills and tables. Three of the sites have a shelter to protect from the rain.  There is no water.  There is one outhouse.

​To appreciate Castle Gardens you will need to walk and explore the ridges and perhaps the adjacent valley to the west-southwest.  Just driving through does not do it justice.  We recommend you allocate about an hour to explore and enjoy the sandstone erosional features.  Be careful, there are some drop-offs and cliffs.  You will need to supervise the kids.  This place can get hot and sunny in the summer so time your visit. 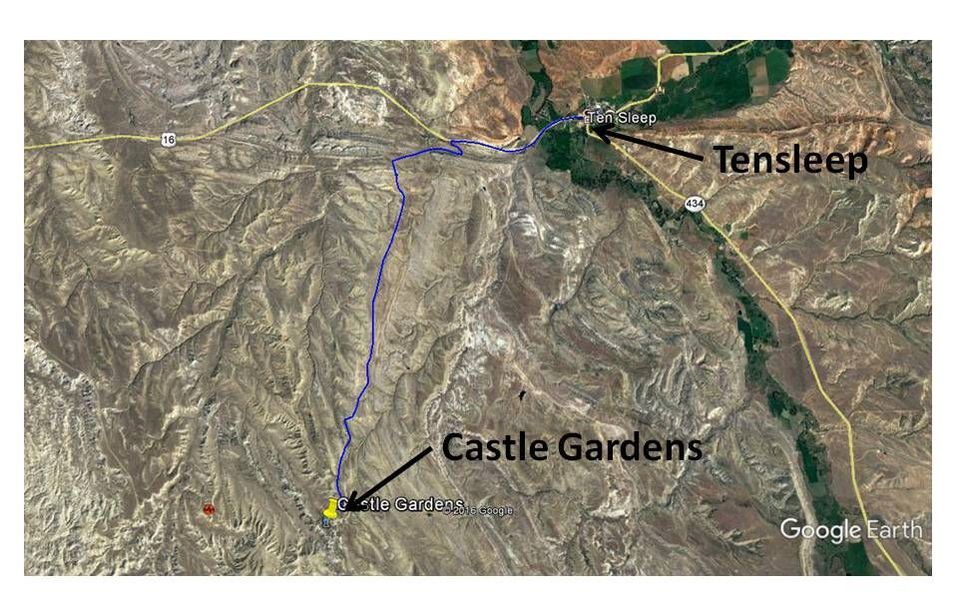