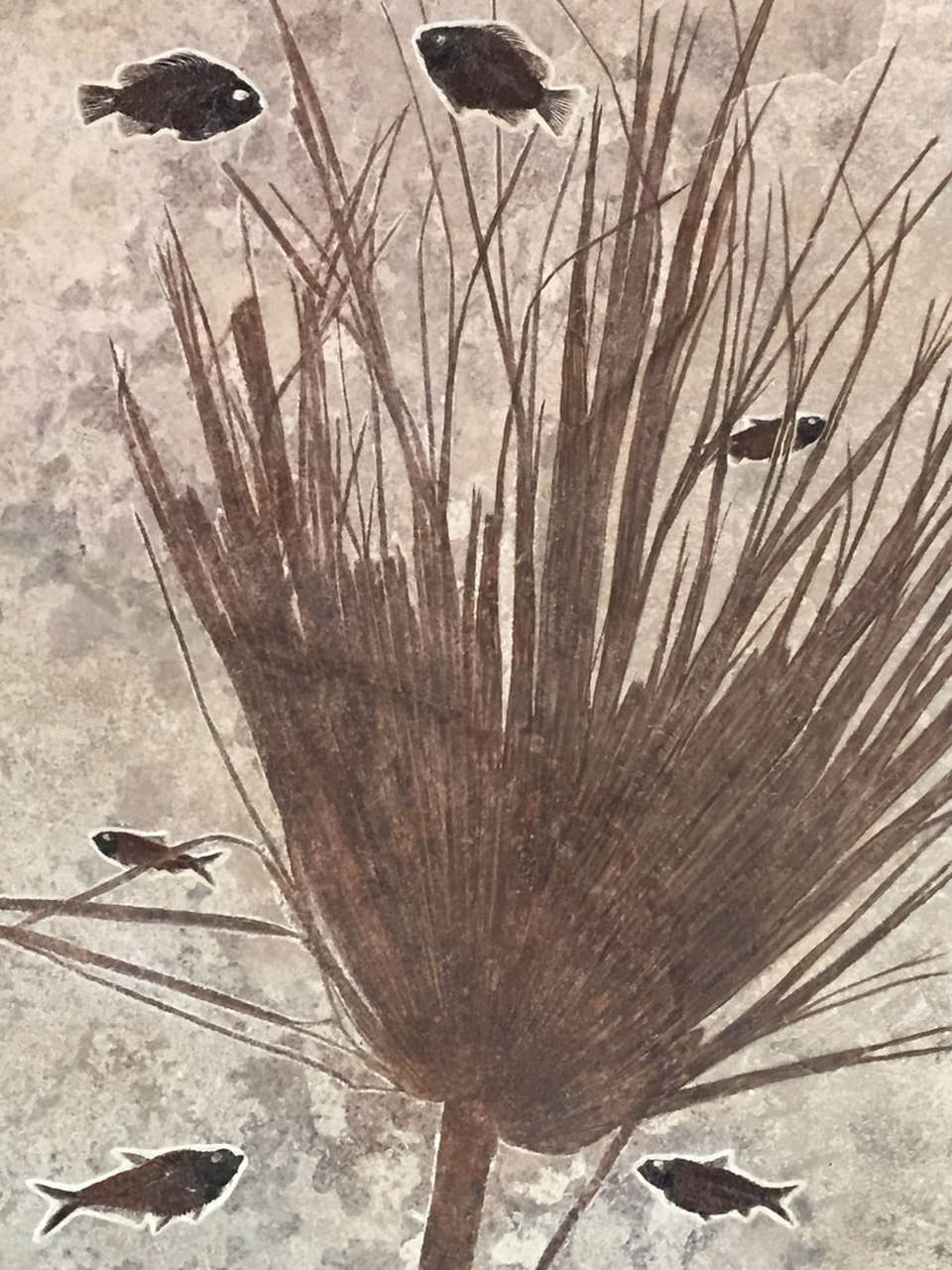 Geologist Factor (3 out of 5 stars, if you go on a fossil dig it is five stars):

Perfectly preserved fish fossils in astounding numbers. This is one of the richest paleontology locations on earth.  After visiting Fossil Butte National Monument to see and hear about the geology, you really need to go on a fossil fish dig at a nearby commercial quarry.  You will be so engrossed that you will not notice the passage of time, the summer heat or the baking sun.  Beware, fossil fever is extremely addictive and similar to gold fever.

Fossil Lake was the smallest of three ancient lakes that existed 52 million years ago during the Eocene in southwest Wyoming, northeast Utah and northwest Colorado (see map below of Green River Lake System). Fossil Lake and Fossil Basin in which it was situated, were elongated north-south and covered about 600 square miles. Location of the basin and of the lake was controlled by the underlying structural geology of the Wyoming Thrust Belt with thrust faults in the area predominantly oriented north-south.  Movement on these thrust faults predated the existence of the lakes and the lake sediments are essentially flat and overlie the complexly faulted and folded older rocks. Erosion has dominated this area in the last 3 to 4 million years to generate the butte landscape you see now. 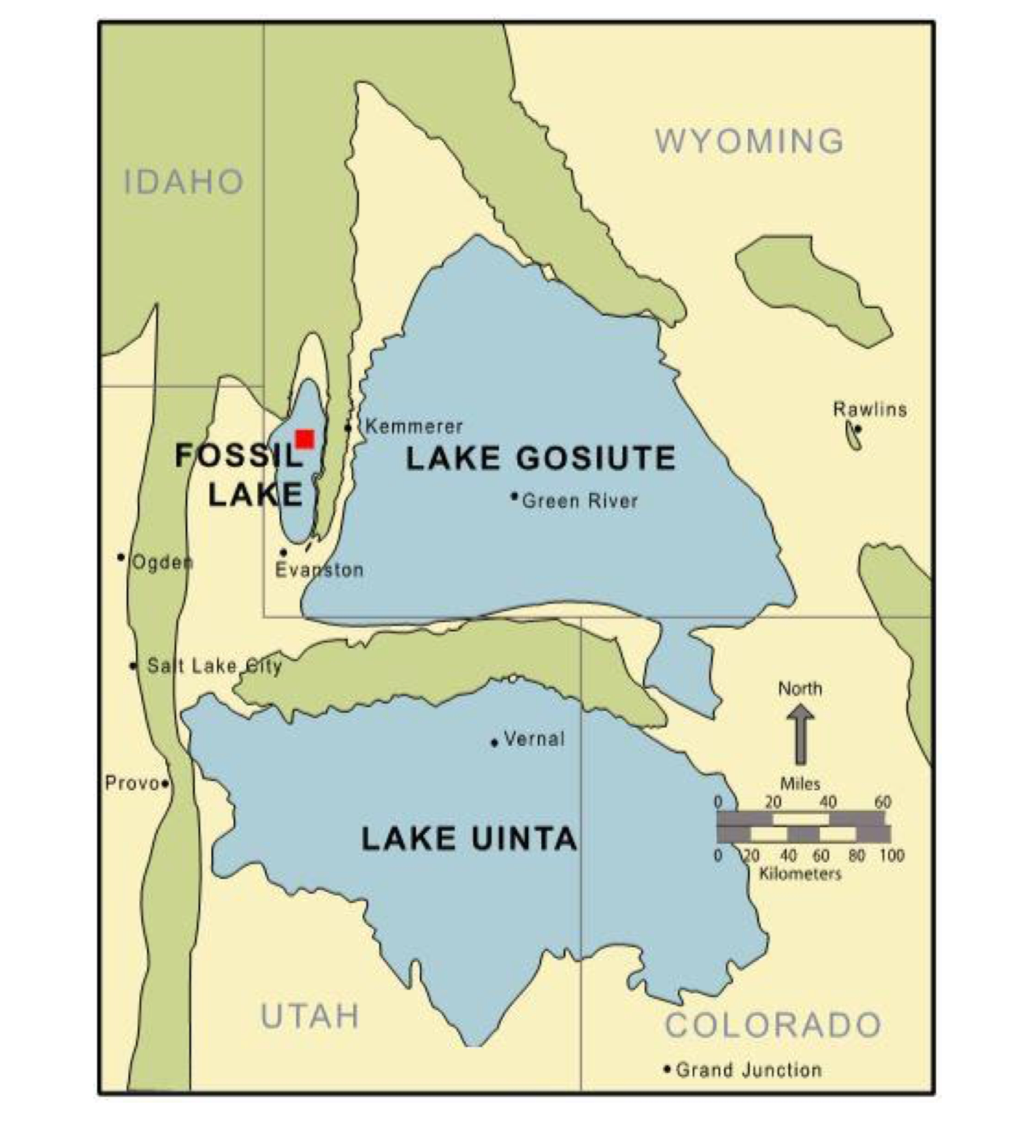 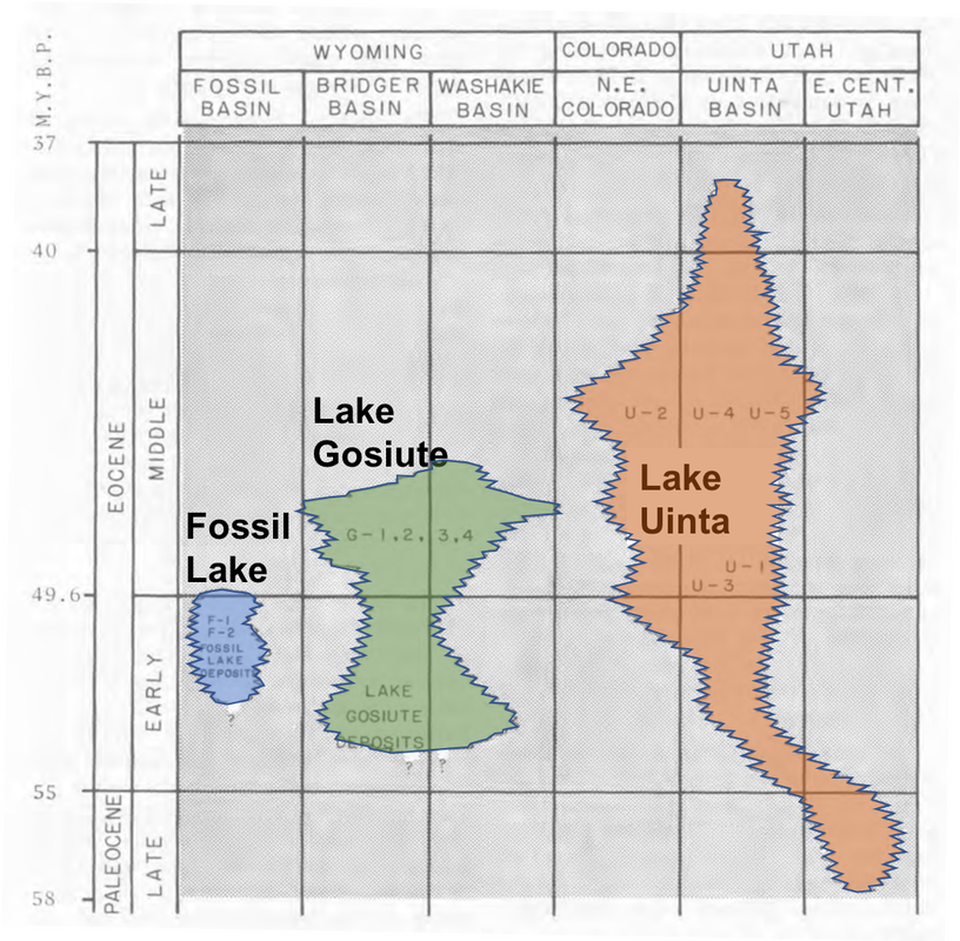 ​Geographic distribution and time distribution of the three Green River lakes.  The vertical scale is millions of years before present.  The Fossil Butte Member was deposited about 52 million years before present in the Early Eocene based on dating of a volcanic tuff.
Modified from Lance Grande, 1984, Paleontology of the Green River Formation, with a Review of the Fish Fauna, Geological Survey of Wyoming, Bulletin 63, p 333
http://www.wsgs.wyo.gov/products/wsgs-1984-b-63.pdf (33 MB download) 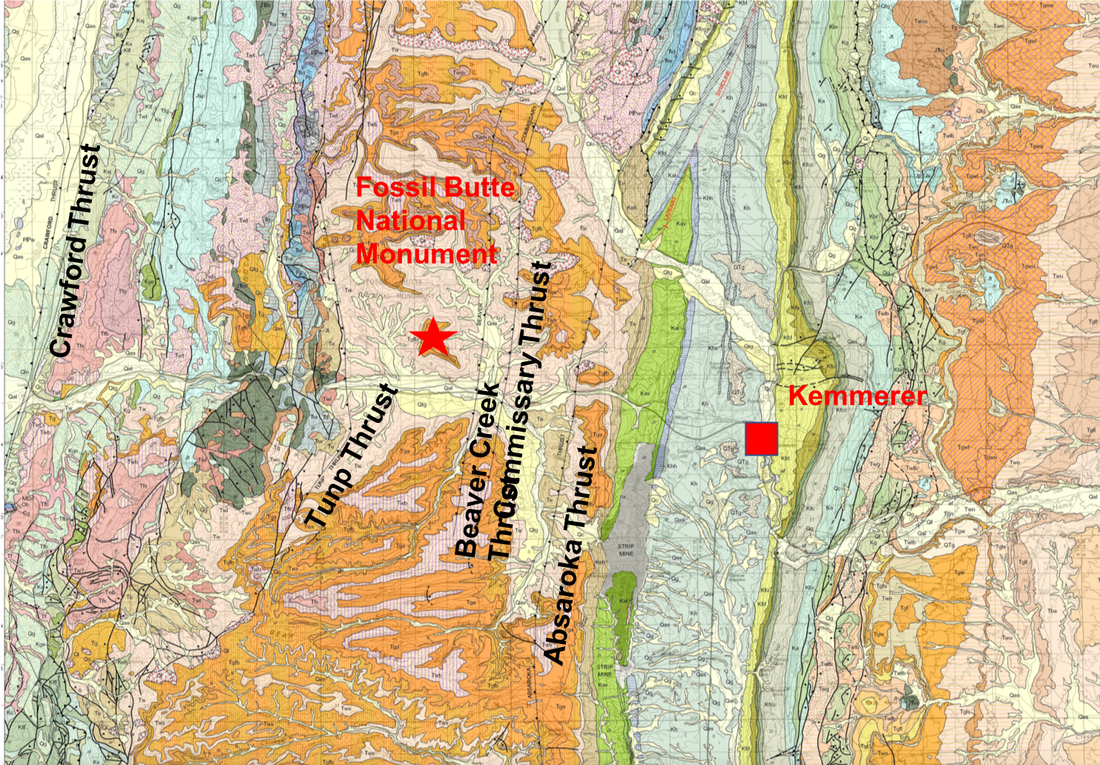 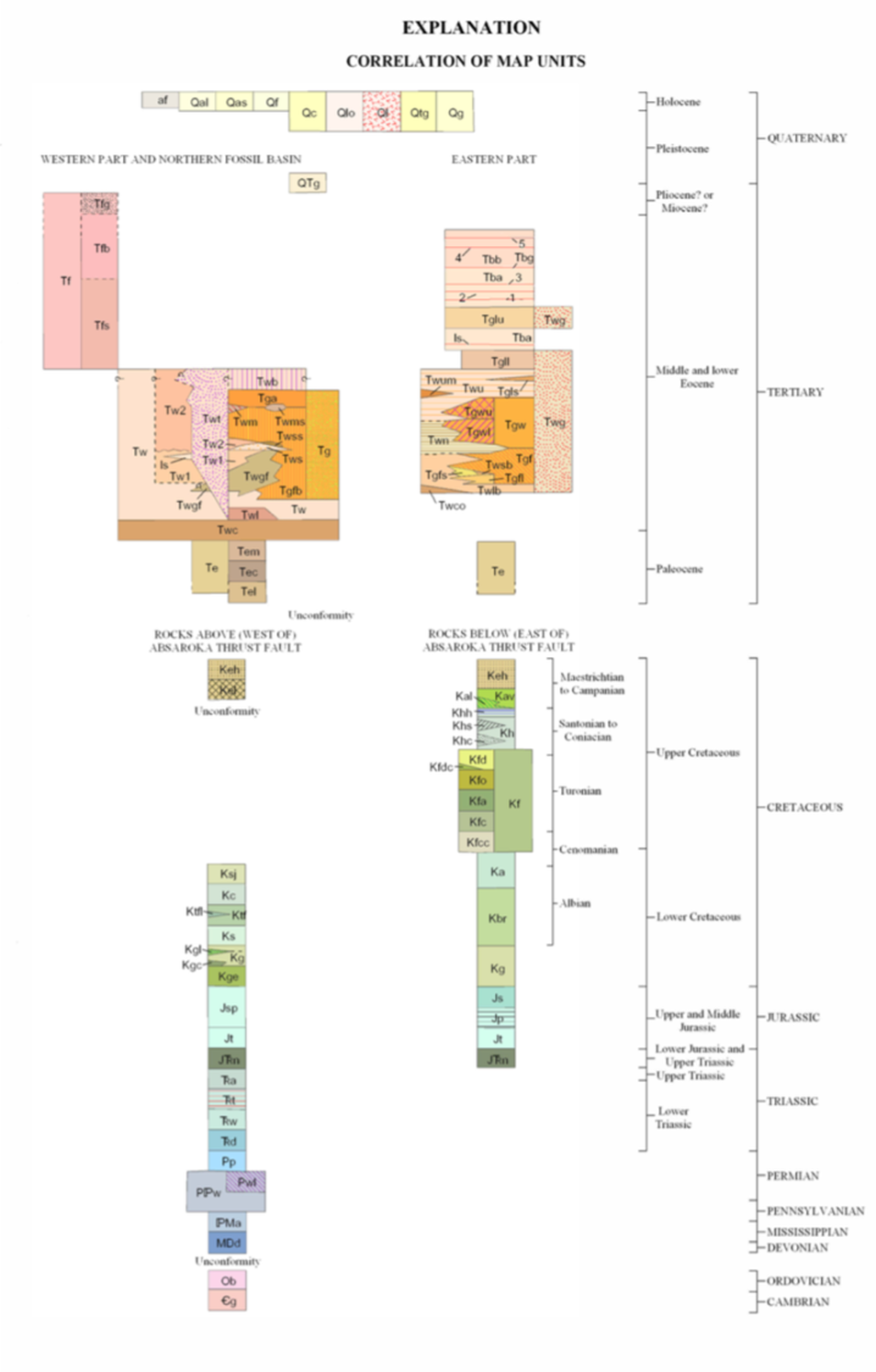 The river and floodplain sediments deposited along the edge of Fossil Lake became sandstones, siltstones and shales of the Wasatch Formation. Into the lake were deposited clay, sand, silt, carbonate, salts and organic matter that became rocks of the Green River Formation (see stratigraphic column below). The lake deposits are about 400 feet thick and have been divided into three members, the Road Hollow Member at the base, Fossil Butte Member in the middle and the Angelo Member at the top. Fresh water dominated the lake during deposition of the Road Hollow and Fossil Butte Members, whereas hypersalinity dominated deposition of the Angelo Member. 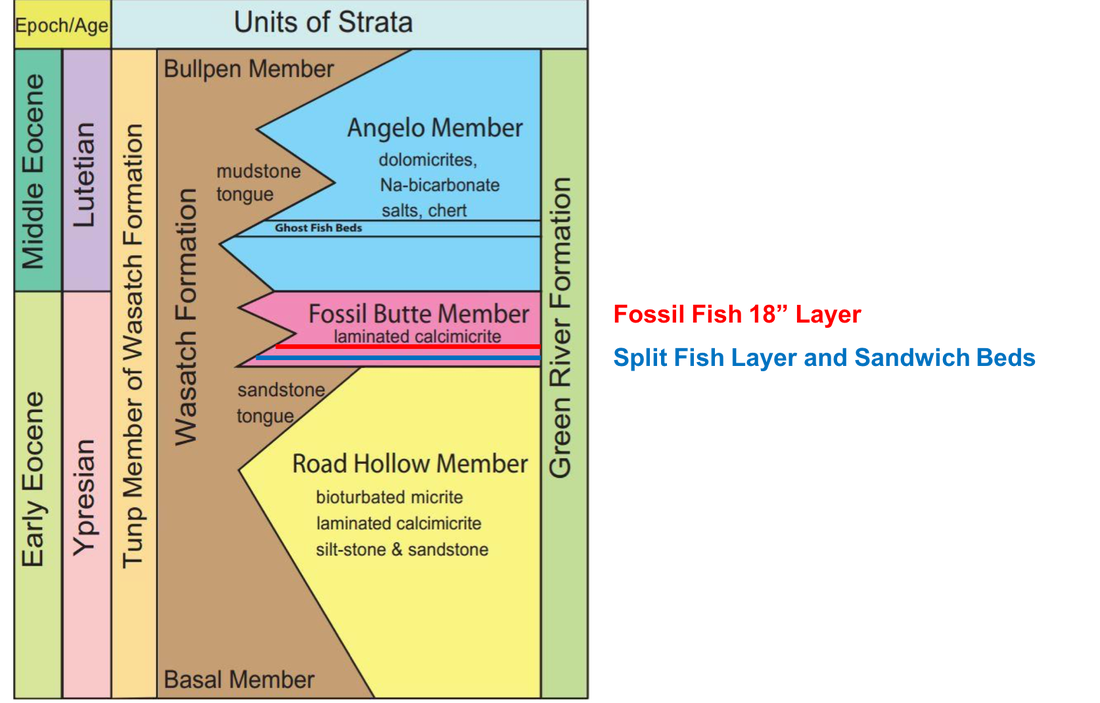 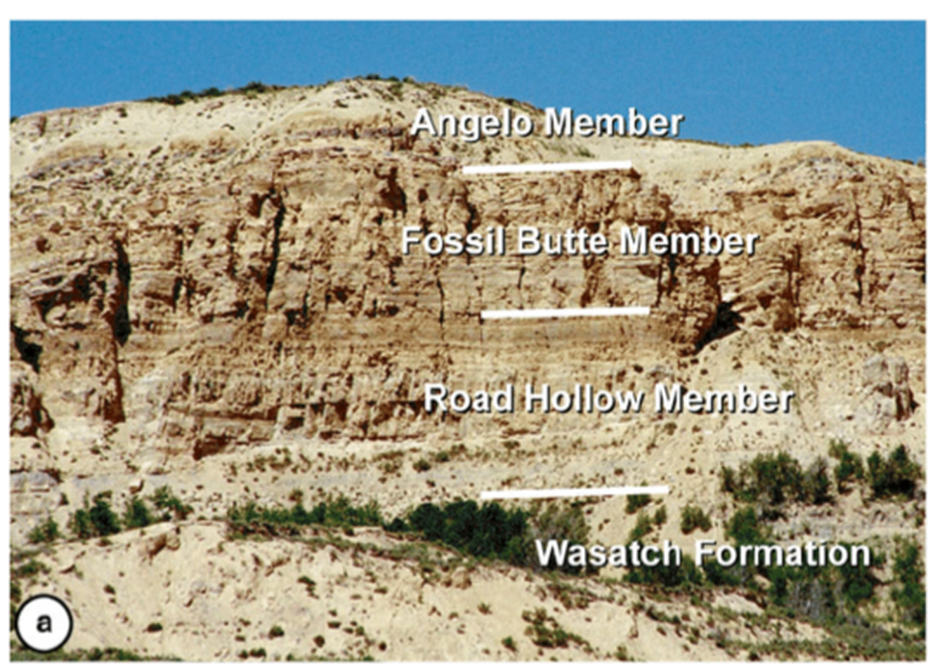 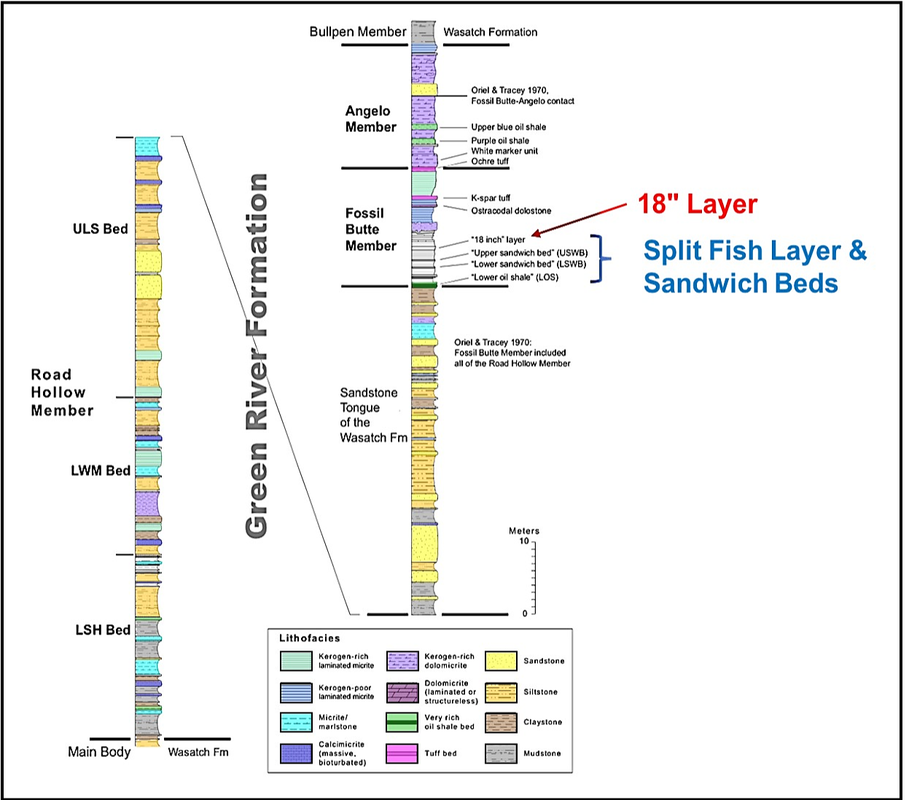 Composite stratigraphic column of Green River Formation in Fossil Basin
Image by Buchheim, Biaggi and Cushman, 2015, Stratigraphy and Interbasinal Correlations Between Fossil and the Green River Basin, Wyoming, in Stratigraphy and Paleolimnology of the Green River Formation, Western USA
https://www.researchgate.net/publication/286256062_Stratigraphy_and_Interbasinal_Correlations_Between_Fossil_and_the_Green_River_Basin_Wyoming
The plant and animals that lived in and around Fossil Lake included fish, amphibians, crocodiles, turtles, birds, ostracods, gastropods, bivalves, insects and a variety of plants and mammals. During the Eocene, the latitude of Wyoming was similar to today, but the climate was moist temperate to subtropical. The presence of crocodiles suggests a constant, warm temperature. Lowlands and floodplains surrounded the lake with palms, cat tails, sycamores, maples and oaks.  Upland forests grew on the surrounding hills and mountains
.
The organic ooze at the bottom of Fossil Lake was composed of phytoplankton, blue-green algae, bacteria, zooplankton, and some pollen and spores. Burial and compaction converted the organic matter into a precursor to oil called kerogen.

Layers deposited in the lake center (famous 18 inch fossil fish layer) consist of finely laminated limestone called micrite.  The color is light buff to light gray with dark brown laminae composed of kerogen. Each lamina may represent the deposition of an annual or even a seasonal layer of sediment. An annual lamina is called a varve. Thus, the fossil-rich intervals like the 18” layer and split fish layer may only represent a few hundred years to a few thousand years of lake deposition. Fossil fish are found in both kerogen-rich and kerogen-poor laminated micrite (limestone).  They are not found in the lake sediments that consist of dolomites that probably represent hypersaline deposition.

Sediments deposited near the lake margin were more oxygen-rich and more disturbed by bottom dwelling burrowers and scavengers that dispersed and broke the fish bones. The water near the lake shore was less saline and less alkaline. Bottom dwellers common in the near-shore environments include gastropods, bivalves, shrimp, crawfish, and stingrays.  Because these near-shore sediments were more burrowed, they tend to be organic-poor and less laminated. 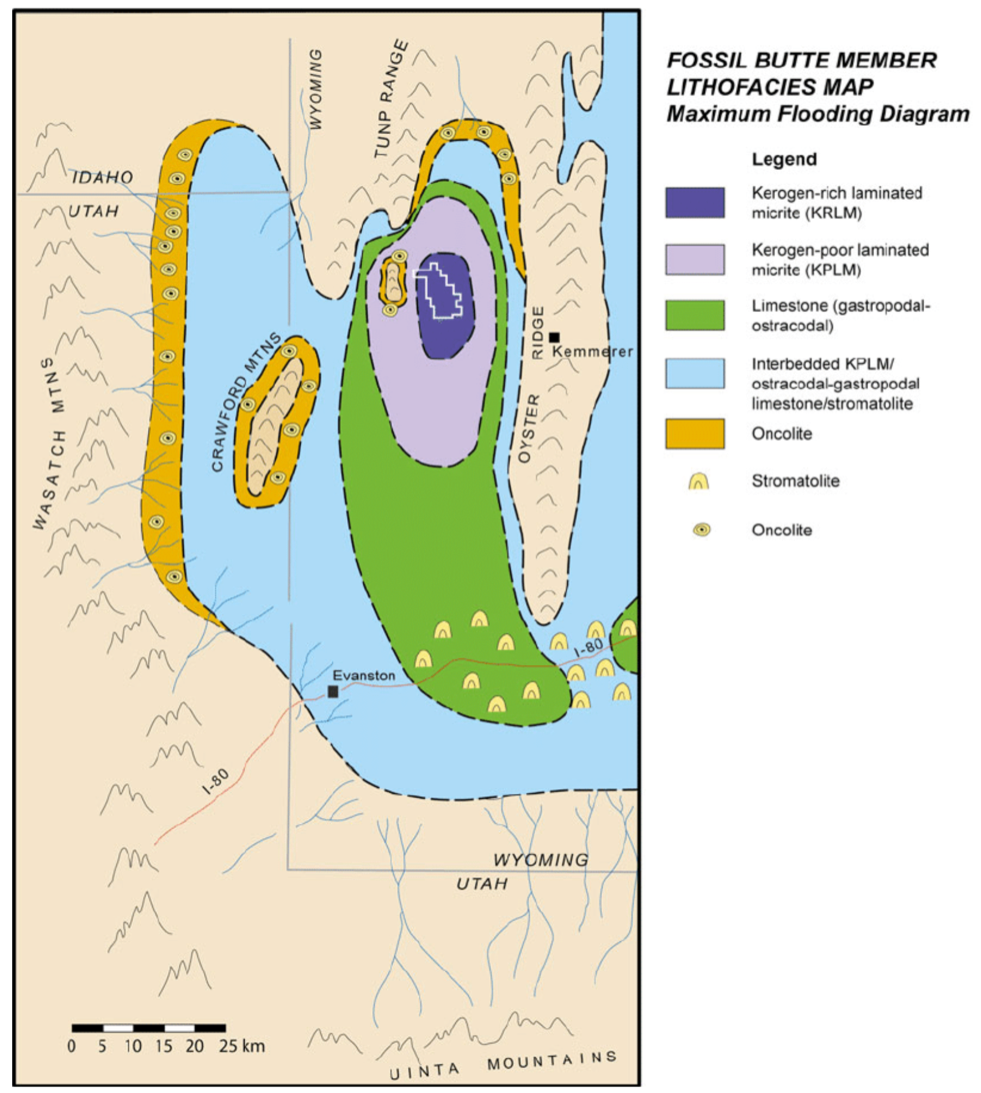 Paleogeography and rock type distribution of the Fossil Butte Member during time of maximum lake extent when Fossil Lake and Lake Gosiute were connected.  Fossil Butte National Monument is shown in a white outline within the area dominated by organic-rich laminated limestone deposition (dark blue).  The oncolites and stromatolites are layered spherical and columnal structures formed by cyanobacterial growth in shallow water.
Image by Buchheim, Biaggi and Cushman, 2015, Stratigraphy and Interbasinal Correlations Between Fossil and the Green River Basin, Wyoming, in Stratigraphy and Paleolimnology of the Green River Formation, Western USA
https://www.researchgate.net/publication/286256062_Stratigraphy_and_Interbasinal_Correlations_Between_Fossil_and_the_Green_River_Basin_Wyoming 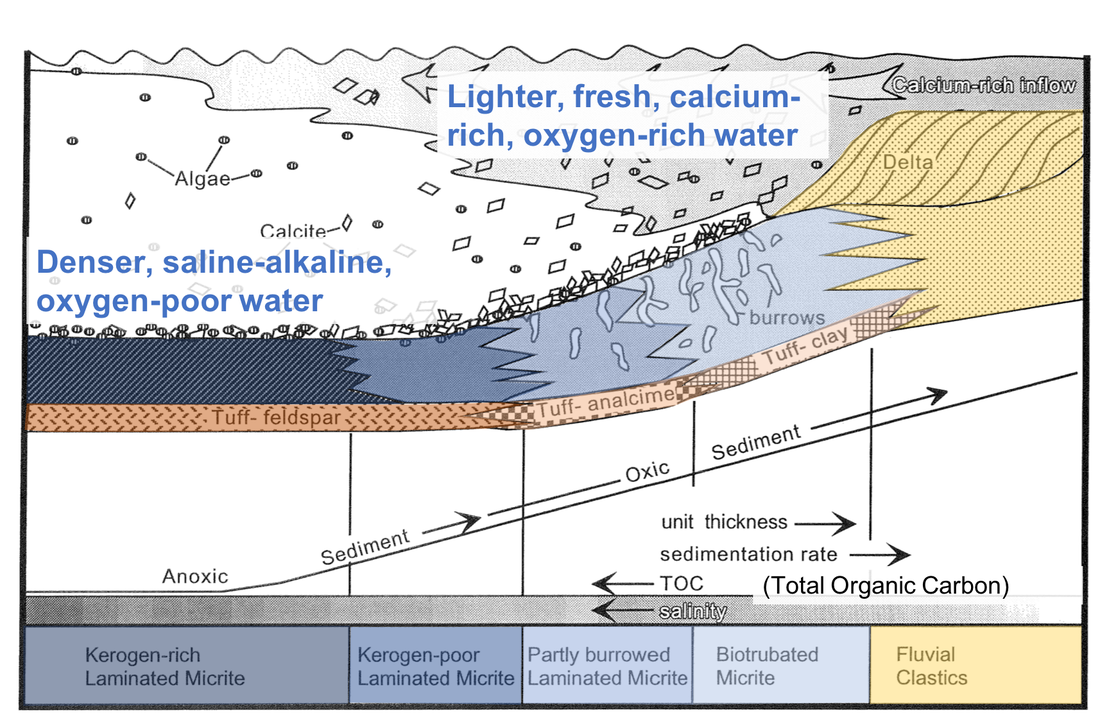 Fossil Basin depositional model has increasing total organic carbon (TOC or kerogen) toward the lake center, increasing salinity in deeper water and in lake center, decrease in oxygen in deeper water and in lake center sediments, increase in oxygen toward shore in water and sediments with more burrows (bioturbation), increase of bed thickness and number of laminae toward shore, increase of sand, silt  and clay toward shore.
Modified from Buchheim, 1994, Paleoenvironments, lithofacies and varves of the Fossil Butte Member of the Eocene Green River Formation, Southwestern Wyoming, in Contributions to Geology, U of Wyoming, v 30 no 1, p. 3-14
https://www.researchgate.net/profile/Paul_Buchheim2/publication/275564804_Paleoenvironments_lithofacies_and_varves_of_the_Fossil_Butte_Member_of_the_Eocene_Green_River_Formation_southwestern_Wyoming/links/5698028808aea2d74375db4f/Paleoenvironments-lithofacies-and-varves-of-the-Fossil-Butte-Member-of-the-Eocene-Green-River-Formation-southwestern-Wyoming.pdf
More sediment was deposited near the lake margin.  The laminae thicken from lake center to lake margin and become more numerous near the lake margin. 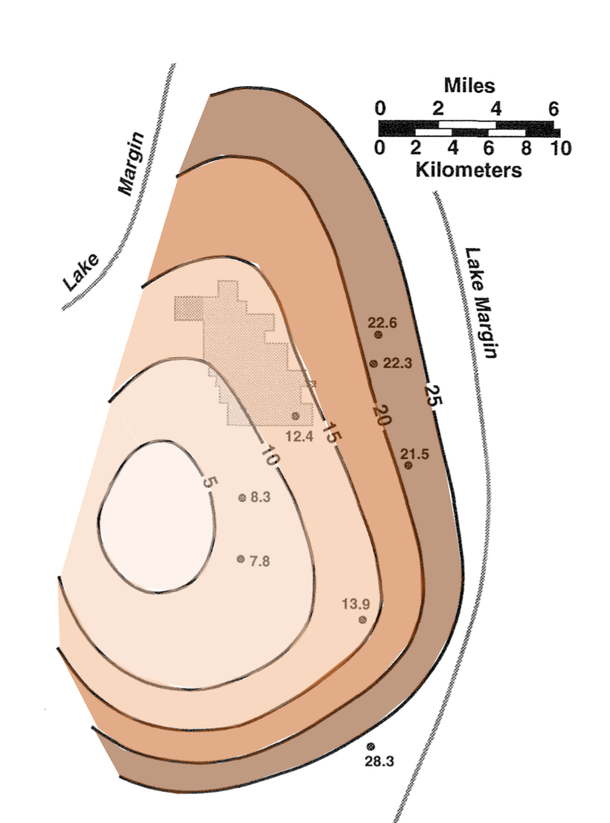 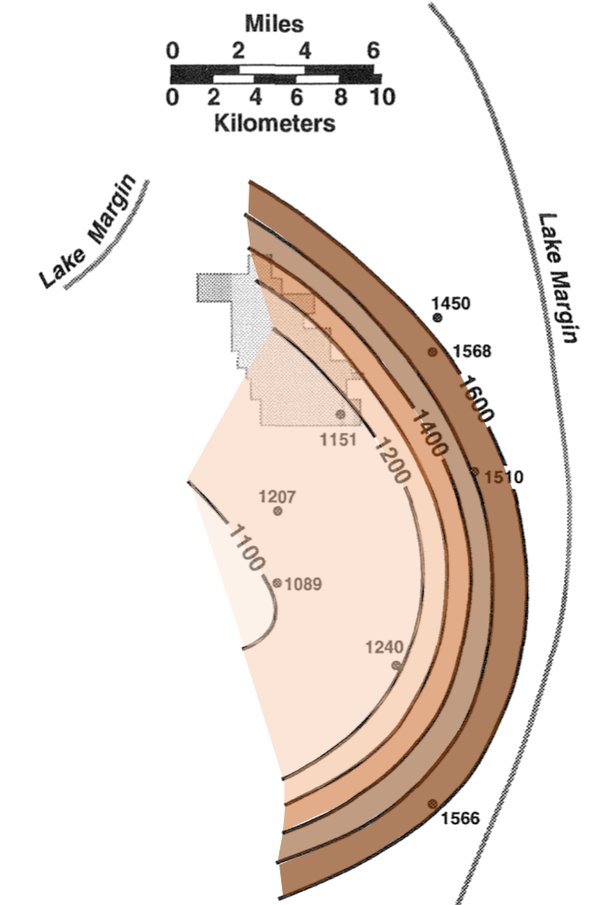 Map of number of laminae in Lower Sandwich Bed shows increase from lake center toward basin margin.  Fossil Butte Monument shown in light gray.
Modified from Buchheim, 1994, Paleoenvironments, lithofacies and varves of the Fossil Butte Member of the Eocene Green River Formation, Southwestern Wyoming, in Contributions to Geology, U of Wyoming, v 30 no 1, p. 3-14
https://www.researchgate.net/profile/Paul_Buchheim2/publication/275564804_Paleoenvironments_lithofacies_and_varves_of_the_Fossil_Butte_Member_of_the_Eocene_Green_River_Formation_southwestern_Wyoming/links/5698028808aea2d74375db4f/Paleoenvironments-lithofacies-and-varves-of-the-Fossil-Butte-Member-of-the-Eocene-Green-River-Formation-southwestern-Wyoming.pdf 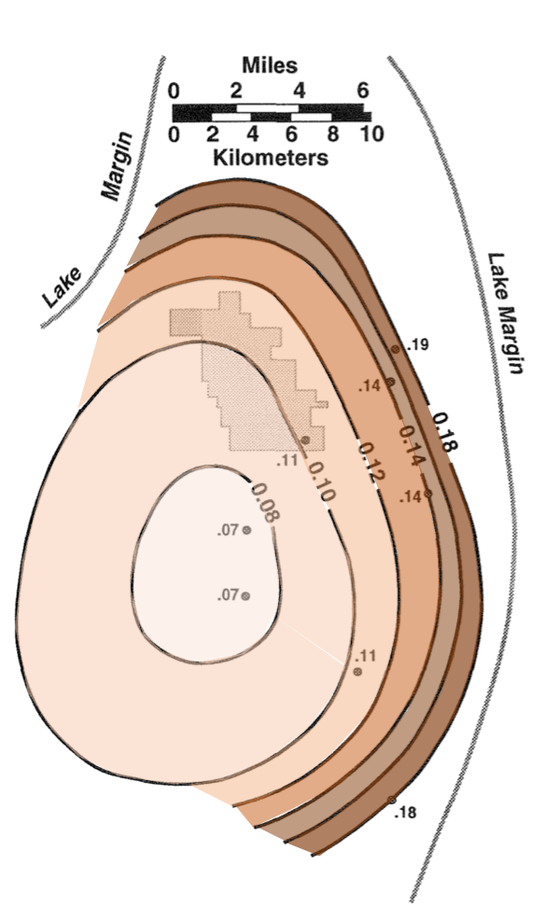 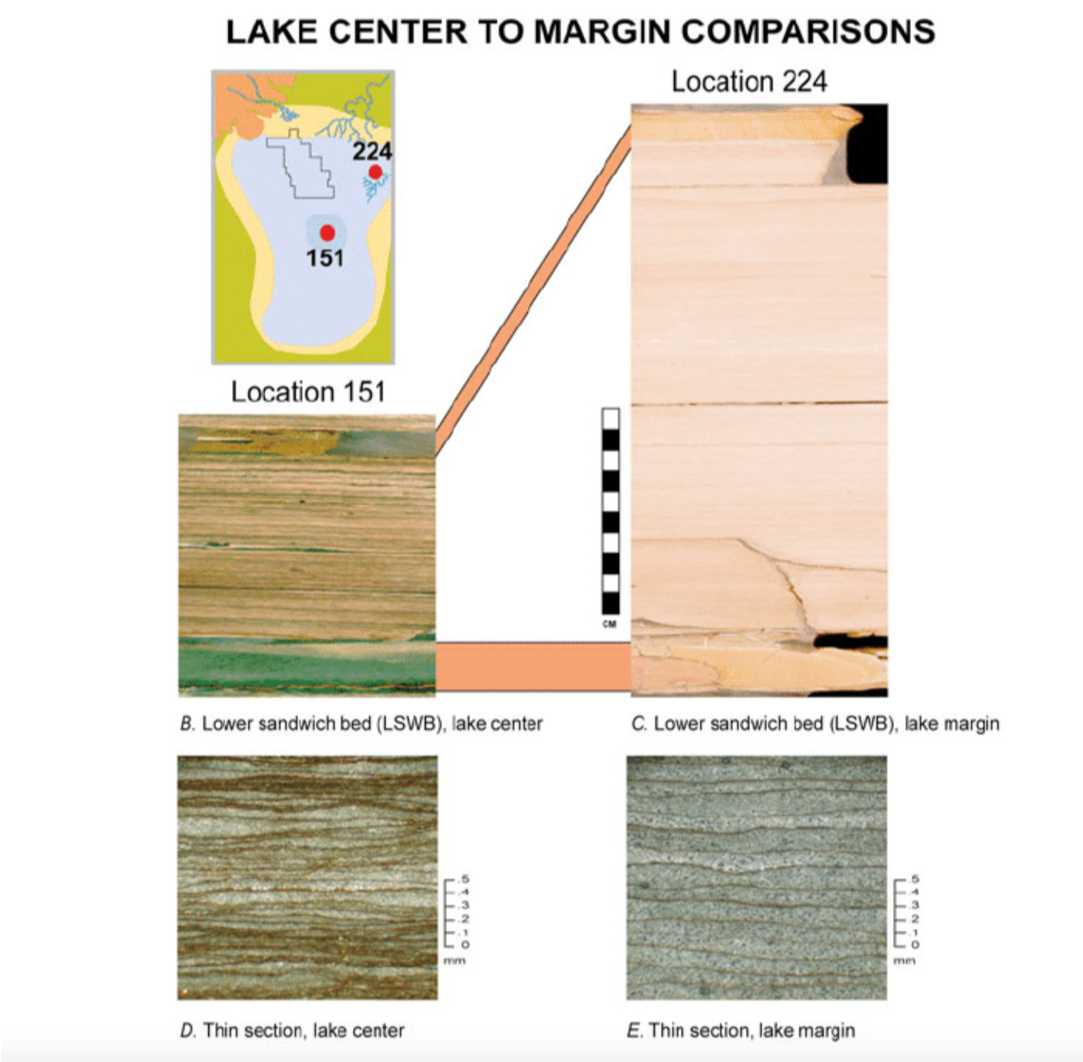 Comparison of lake center rocks on left to lake margin rocks on right.  B & C are hand samples with scale bar in centimeters. D & E are thin sections made for microscope work with scale in millimeters. Note organic-rich thinner laminae on the left in lake center and organic-poor thicker laminae on the right in lake margin. Correlation is made by the volcanic ashfall tuffs at top and base of sandwich bed shown in light brown.  Rocks are from the Lower Sandwich Bed in the Fossil Butte Member. Map shows sample locations in relation to Fossil Butte National Monument and lake outline.
Image by Buchheim, Biaggi and Cushman, 2015, Stratigraphy and Interbasinal Correlations Between Fossil and the Green River Basin, Wyoming, in Stratigraphy and Paleolimnology of the Green River Formation, Western USA
https://www.researchgate.net/publication/286256062_Stratigraphy_and_Interbasinal_Correlations_Between_Fossil_and_the_Green_River_Basin_Wyoming

​The huge quantity and high quality of fossil preservation at Fossil Butte is extraordinary and a rare occurrence in geologic history. For it to happen, two things have to occur. First, there must be occasional mass mortality events in the lake that killed numerous fish, and second, these mortality events must be rapidly buried without any scavengers and burrowers disturbing the remains. Possible causes of mass mortality at Fossil Lake were: 1) water temperature change, 2) change in water pH, maybe a result of volcanic ashfalls, 3) dry periods that increased water salinity or trapped fish in small pools, 4) algal blooms of blue-green algae that consumed the oxygen in the lake, 5) stratified water turnover bringing saltier oxygen-poor water to the surface, and 6) schools of fish swimming into poisonous bottom waters. The lake was probably chemically or thermally stratified, perhaps only seasonally. The lake center sediments were highly reducing and anoxic with high-organic content. These lake center sediments and their bottom waters were inhospitable for bottom dwellers that would have scavenged on the dead fish. 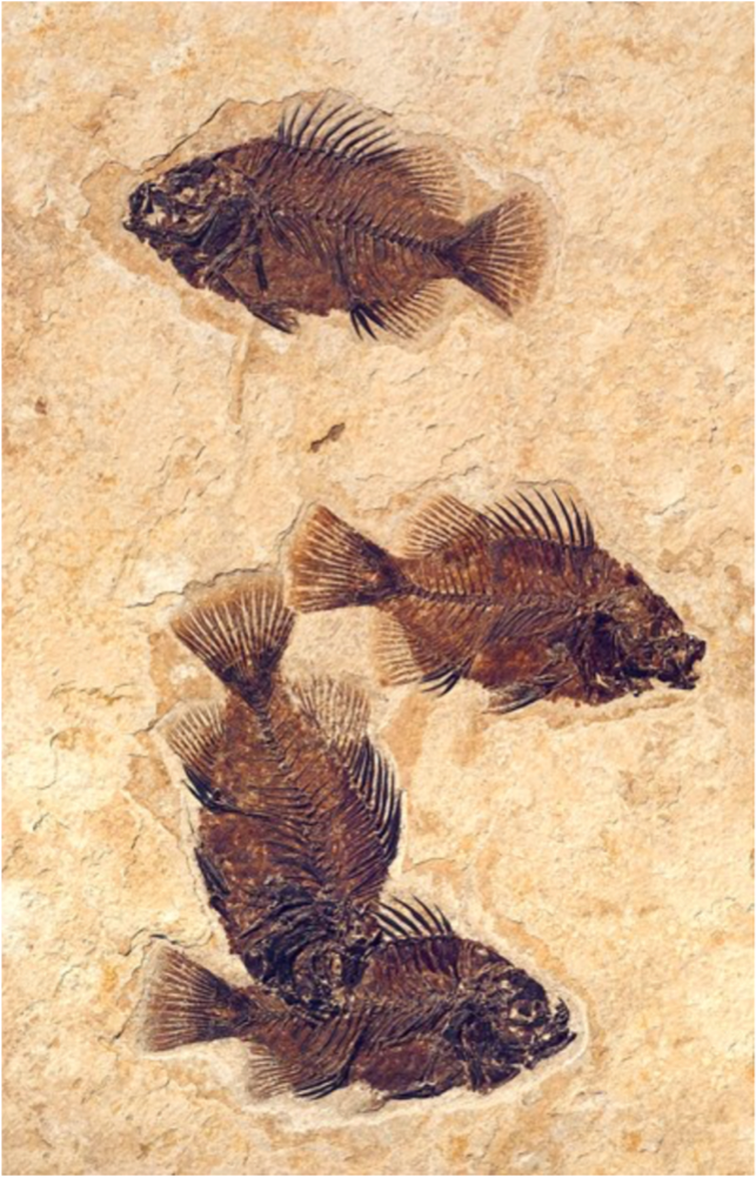 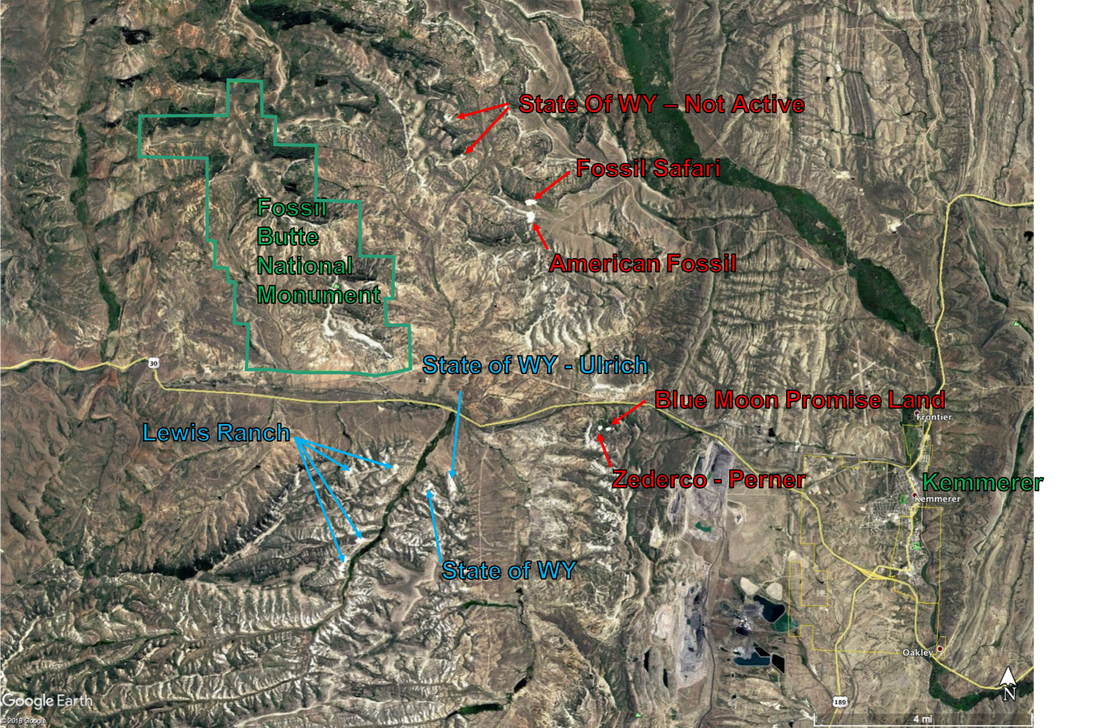 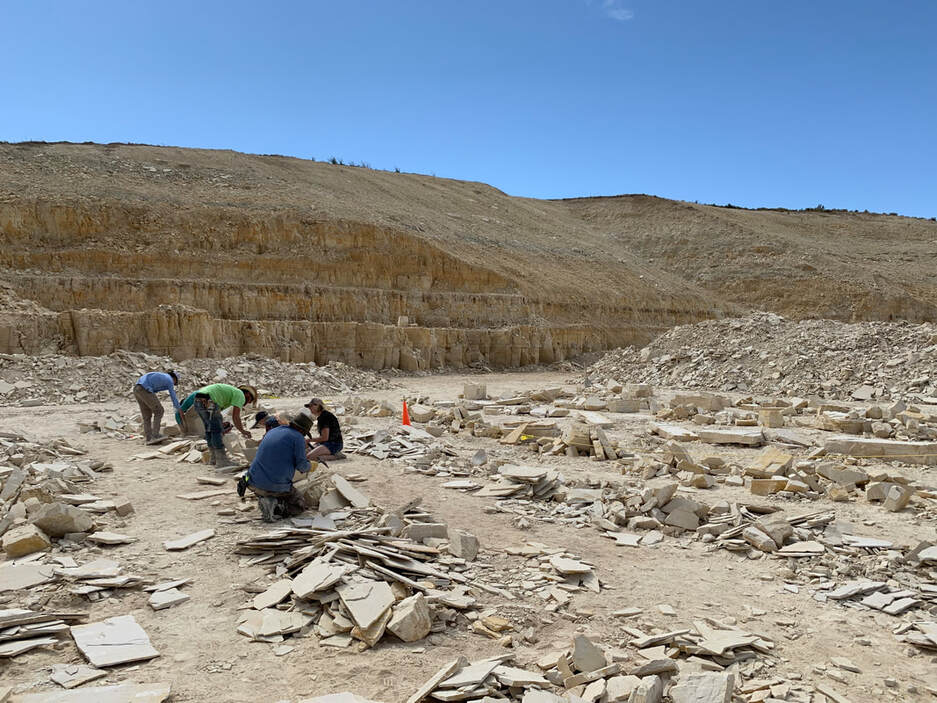 American Fossil quarry with hard working customers engrossed in splitting rock. The famous "18 inch layer" is the dark band at the top of the second bench (about 15 feet above quarry floor). This quarry provides near-shore rock from the "split fish layer/sandwich beds" exposed in the first bench.
Image by Mark Fisher

Paleontology of the Green River Formation, with a review of the Fish Fauna by Lance Grande, 1984 Geological Survey of Wyoming, Bulletin 63 (33.1 MB pdf with lots of fossil fish pictures):  http://www.wsgs.wyo.gov/products/wsgs-1984-b-63.pdf