​​Sixty miles west of Casper is an area of young volcanics that penetrated ancient Precambrian rocks of the Wyoming Craton. These Eocene volcanics are comprised of three distinct groups across the crest of the southern part of the Rattlesnake Hills anticline. A central group of alkaline volcanic rocks (phonolite and trachyte rocks rich in sodium and potassium minerals and poor in quartz) are bordered by an eastern and western complex of felsic volcanism (rhyolite and latite rocks rich in feldspar and quartz). The volcanic field lies at the intersection of three structural features: the northwest-trending Rattlesnake Hills Anticline (fold of Laramide timing), the northeast-trending Belle Fourche Lineament (linear fracture or fault of Precambrian and Laramide timing), and the west-east trending North Granite Mountains Fault system (faults of Precambrian, Laramide and Miocene timing). 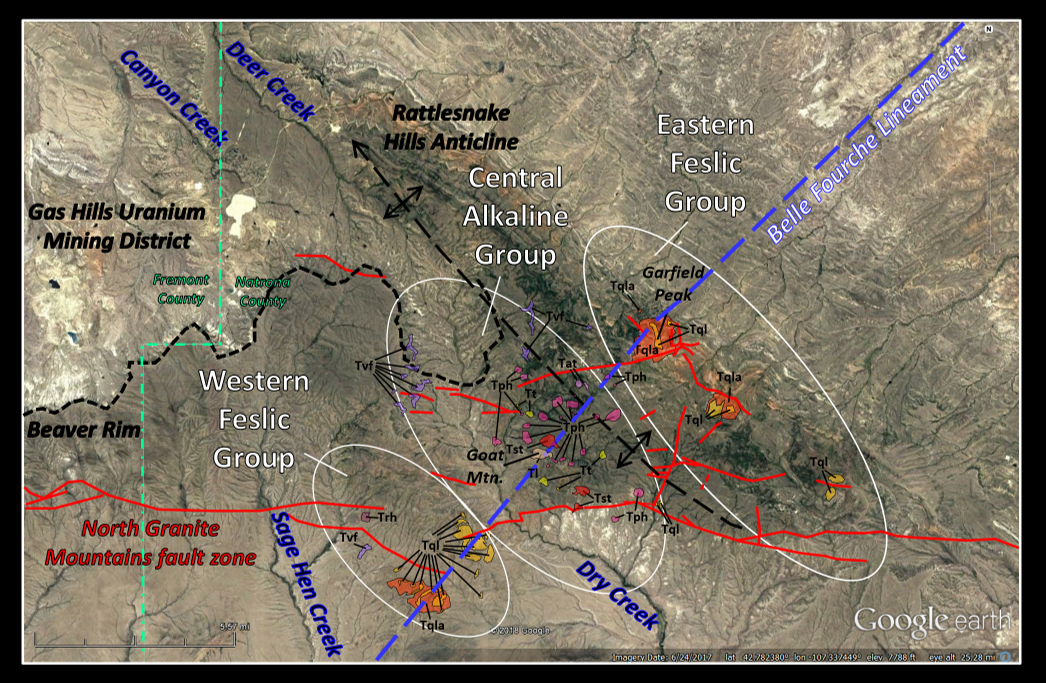 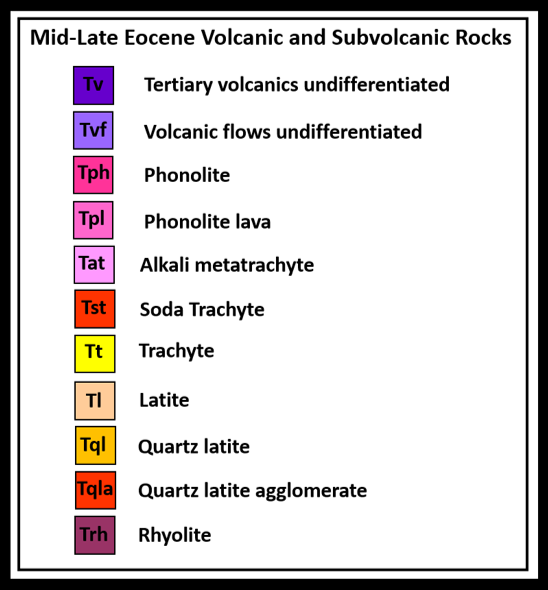 The Rattlesnake Hills area is in a Precambrian Archean greenstone belt. Greenstone belts are very old, thick, complex sequences of low grade metamorphosed volcanic and sedimentary rocks that are found today sandwiched within Precambrian cratonic granite-gneiss terranes worldwide.  The name comes from the green hue imparted by minerals formed at the greenschist facies of metamorphism that was subjected to moderate temperatures and pressures (e.g. chlorite, serpentine, actinolite, fuchsite and epidote). 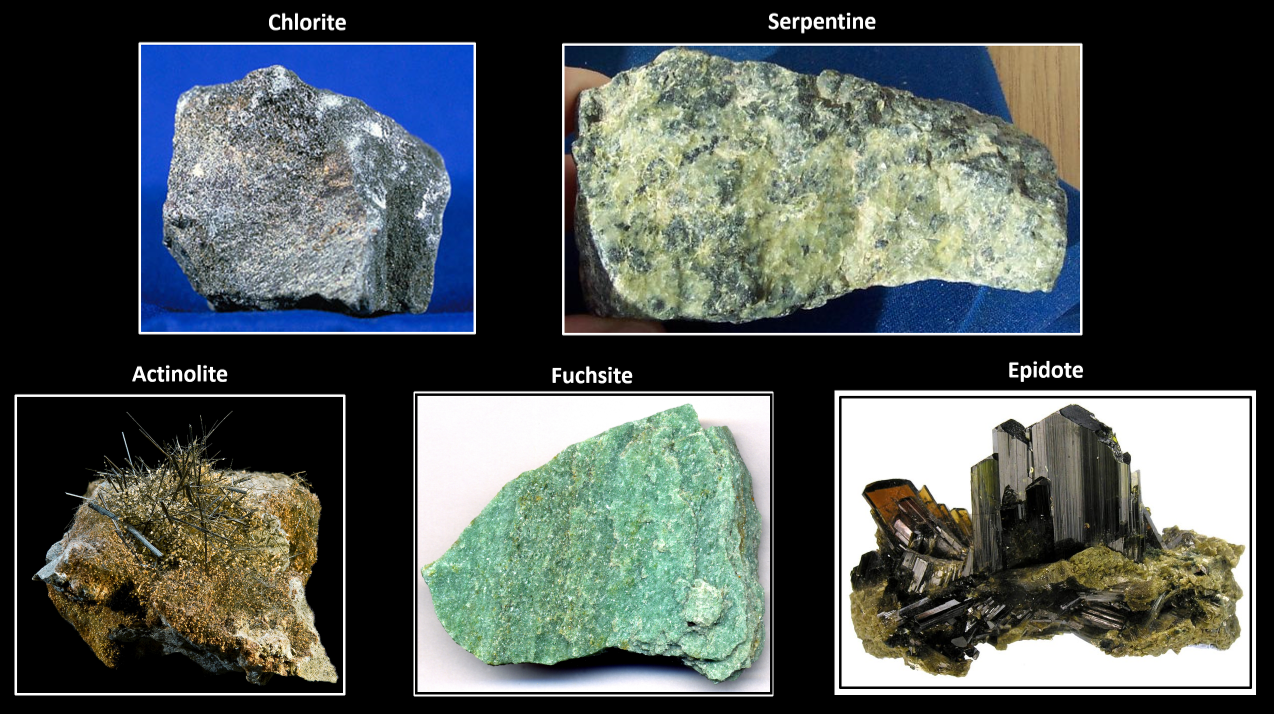 Green tinted minerals found in Greenstone Belts.
Image: Chlorite: https://upload.wikimedia.org/wikipedia/commons/3/35/ChloriteUSGOV.jpg; Serpentine:https://commons.wikimedia.org/wiki/File:Serpentyn,_2Polska.jpg; Actinolite: By Didier Descouens - Own work, CC BY-SA 4.0, https://commons.wikimedia.org/w/index.php?curid=8264256; Fuchsite: By James St. John [CC BY 2.0 (https://creativecommons.org/licenses/by/2.0)], via Wikimedia Commons at https://upload.wikimedia.org/wikipedia/commons/6/68/Fuchsitic_quartzite%2C_Laramie_Range_WY.jpg ;
Epidote: By Rob Lavinsky, iRocks.com – CC-BY-SA-3.0, CC BY-SA 3.0, https://commons.wikimedia.org/w/index.php?curid=10139842.
Billions of years ago these were subsiding basins on the back side of an island arc when the ocean was shallow and acidic, and the atmosphere was primarily carbon dioxide gas (CO2). Convection in the mantle in the back-arc area produced extension on the older crustal material and created these basins. The basins are usually found as highly deformed structures (fractures, folds, faults and shear zones). Subsequent collision of continents caused the deformation and metamorphism of these volcanic and sedimentary rocks.

The filling of the greenstone belt is generally in three sequential parts. It begins with mafic and ultramafic igneous rocks (heavy minerals rich in iron and magnesium) extruding onto basement crust. The middle unit is mainly basaltic rocks (also iron and magnesium rich) becoming more felsic (lighter minerals rich in silca, oxygen, aluminum, sodium and potassium)  upwards. Banded iron units are found intermittently in this section. The upper unit consists of greywackes (dirty sandstones), shale/slate, quartzite and conglomerates. All the units are enfolded by accretion of tectonic plates. 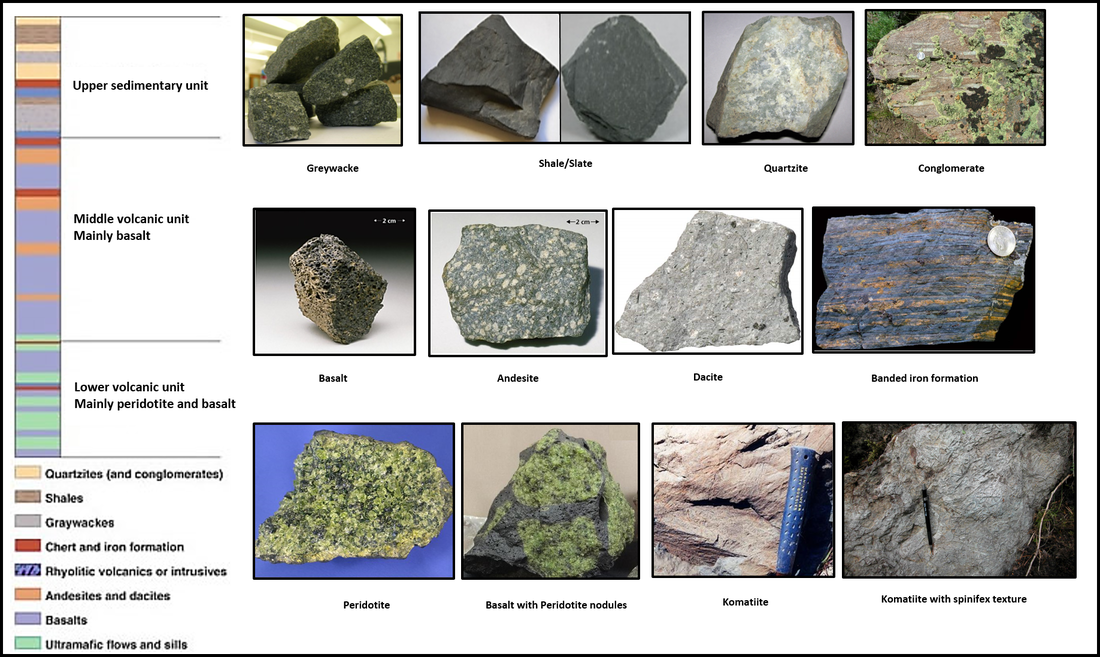 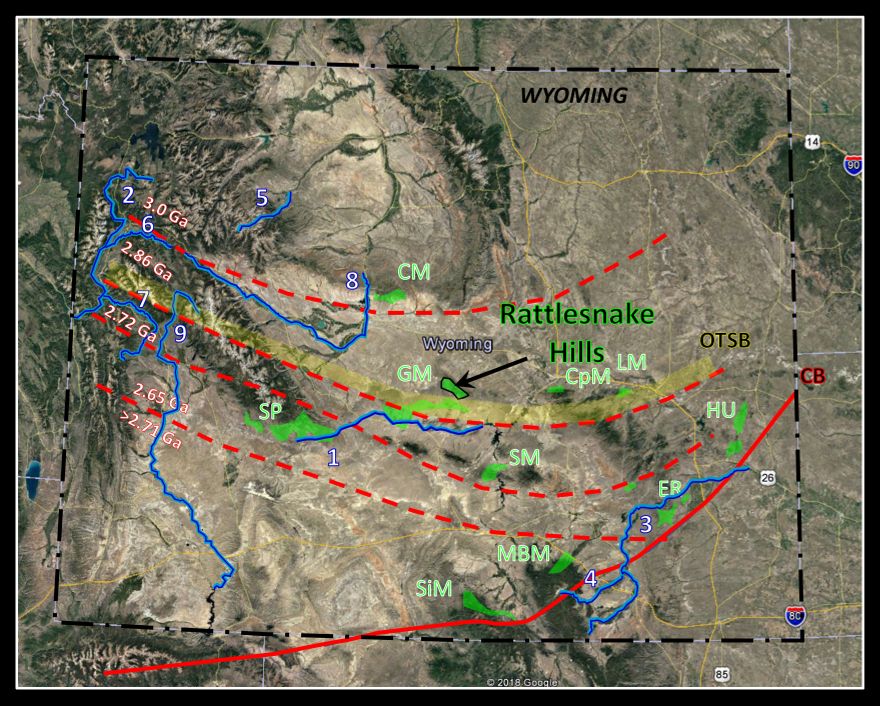 The Rattlesnake Hills granitic gneiss was emplaced into a back-arc area about 3.6 to 3.3 billion years ago (Paleo-Mesoarchean crust of Sacawee gneiss). The greenstone belt began to form about 3.2 billion years ago with the deposition of the initial volcanic and sedimentary units on the gneissic basement rocks of continental crust. The rocks underwent deformation and metamorphism about 2.83 billion years ago, and again when they sutured onto the Wyoming craton along the Oregon Trail structural belt.

The Archean sedimentary and volcanic rocks are divided into three formations: 1) Barlow Springs Formation (base), 2) McDougal Gulch Metavolcanics (middle), and 3) UT Creek Formation (top). The Barlow Springs is primarily a metasedimentary complex of quartzite, pelite (metamorphosed siltstone and claystone), banded iron formation and amphibolite deposited in a shallow marine basin in a back-arc area. This tectonically quiet area occasionally underwent periods of minor volcanism.  Chemically precipitated iron and chert formed banded iron deposits. The McDougal Gulch units were deposited at a time of active arc development and basin deepening.  The formation consists of metabasalt with amphibolite schist and minor talc-chlorite schist. The uppermost unit, the UT Creek Formation, consists predominately of metagraywackes (metamorphosed dirty sandstones). The texture and composition of the rocks indicate they represent distal turbidites (deep water sediments).  The sediment volume suggests active uplift and erosion of the bordering island arc and craton. All three formations have been intruded by Proterozoic mafic dikes (Yd: 1,600 to 900 million years ago).
​
The sedimentary and volcanic rocks were then deformed and metamorphosed to a greenschist-amphibolite facies (moderate temperatures and average to high temperatures) as the basin closed. Folds in the rocks are parallel to foliation. On the margin of this continent, Cambrian through Tertiary sediments were deposited unconformably over the deformed greenstone belt. 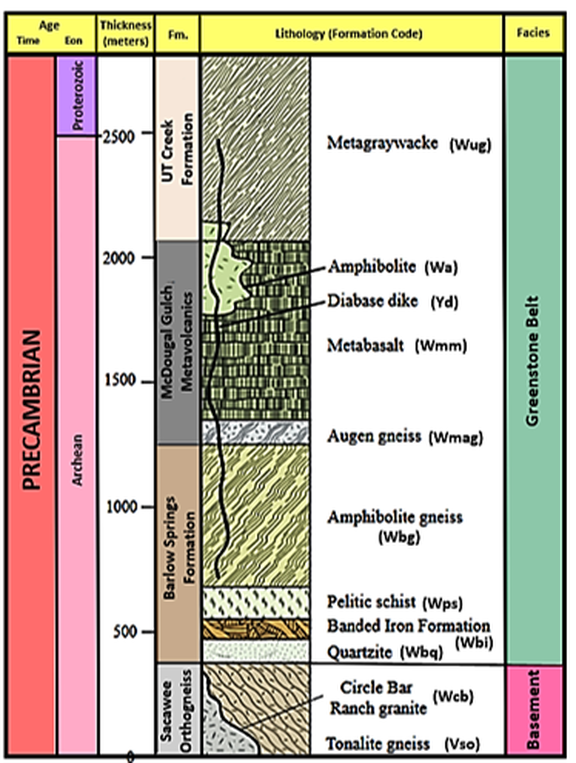 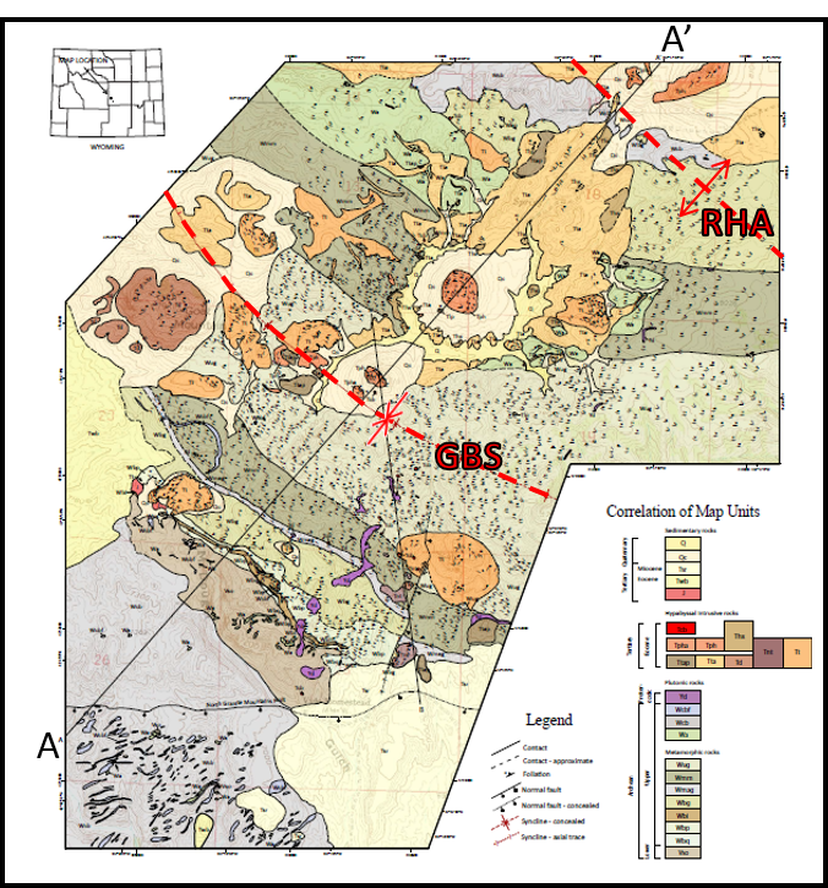 ​The Rattlesnake Hills volcanic complex encompasses 42 plugs, dikes, and sills of middle Eocene age (48.6-37.2 million years ago) that intruded the greenstone belt after Laramide deformation. They are in Townships 31-33 North, Ranges 88-89 West. The volcanic rocks are divided into three groups based on lithology and texture (Hoch and Frost, 1993). The eastern felsic complex is on the northeastern gentle flank of the asymmetric Rattlesnake anticline. The central alkalic group lies across the anticlinal axis of the fold. The western felsic complex is to the west of the anticline on either side of the North Granite Mountains fault. The western complex is compositionally like the eastern complex but is texturally finer grained. 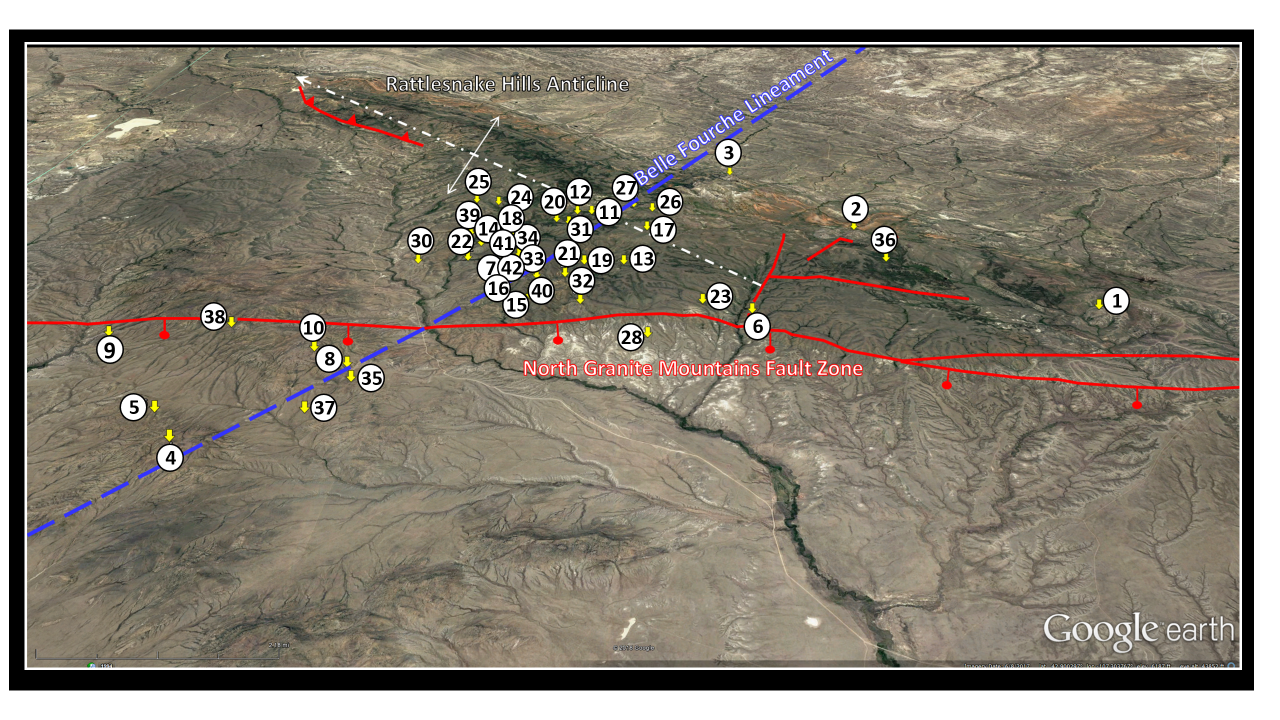 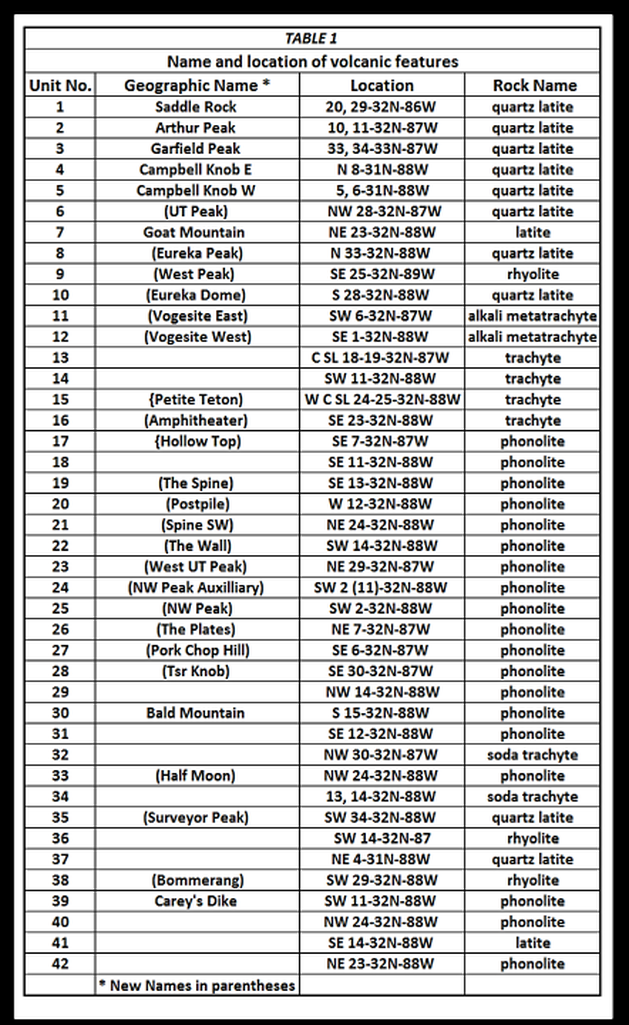 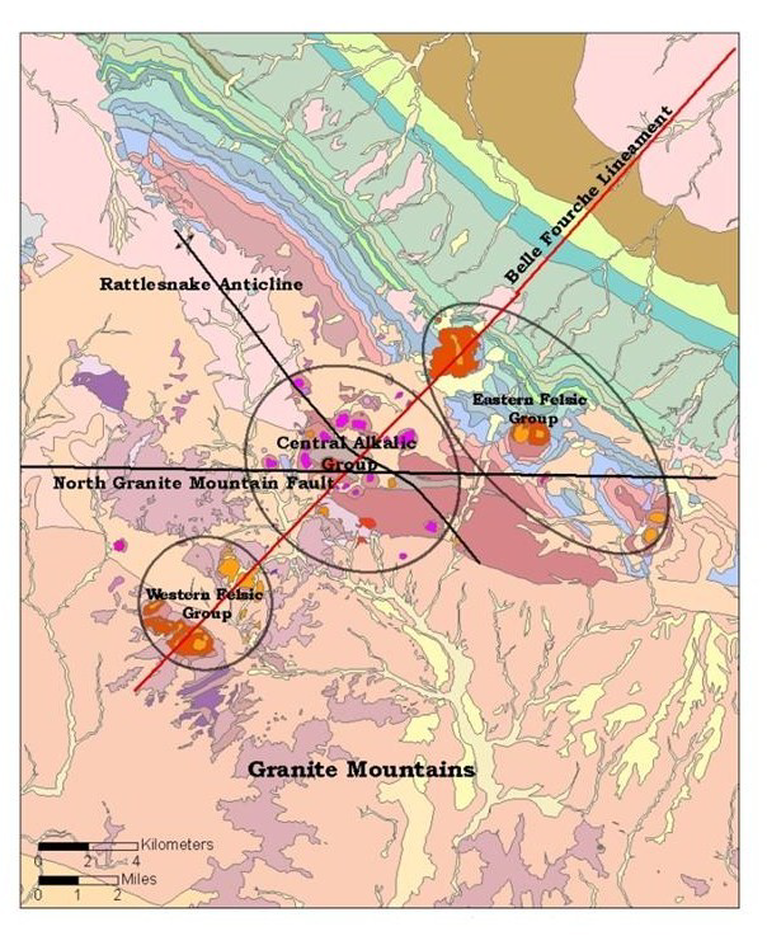 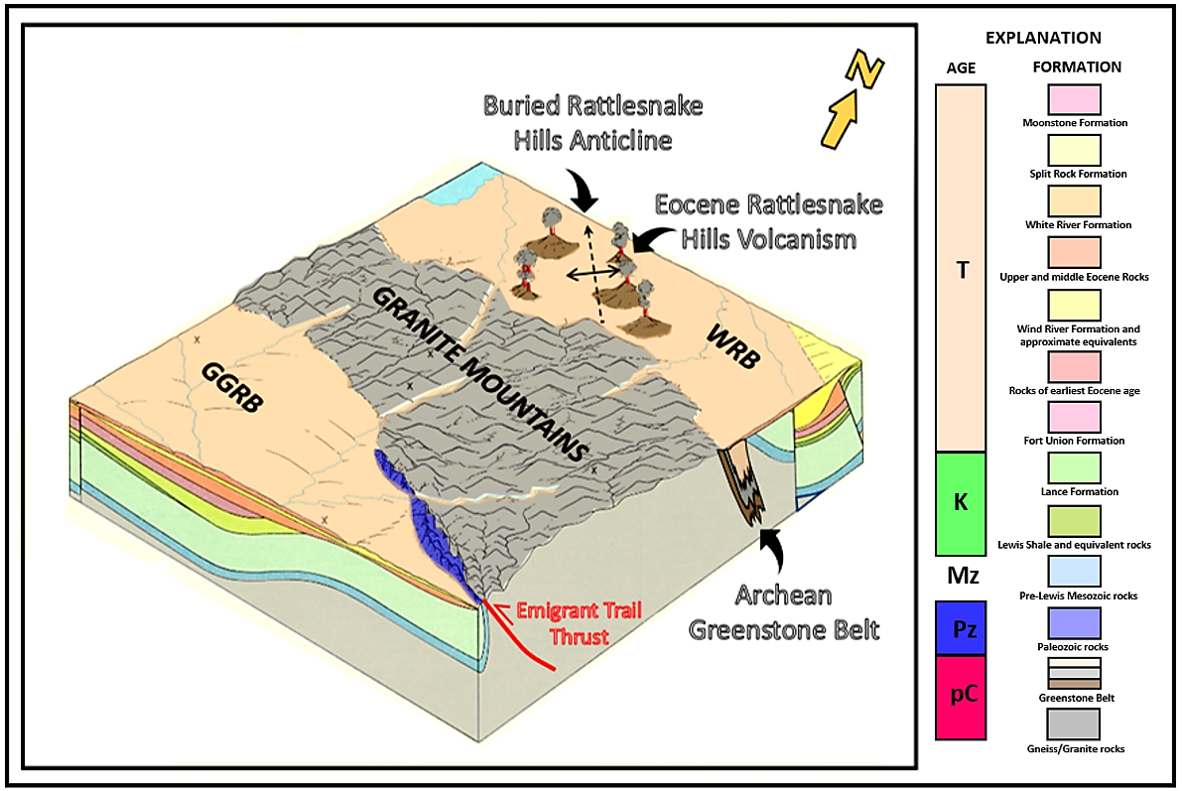 The Rattlesnake Hills are part of a regional mineralized volcanic trend aligned northeast-southwest with Precambrian weakness zones of the Belle Fourche and Rock Springs lineaments. The trend intersects other fault and shear systems that intrusive bodies and mineralizing fluids exploited. The magmatism is the result of mantle upwelling through a slab window or gap developed in the subducted plates. 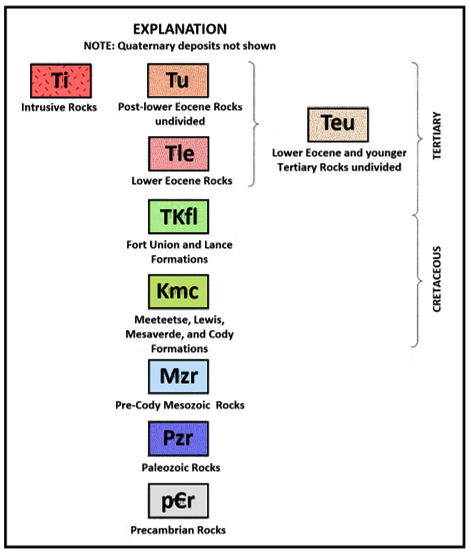 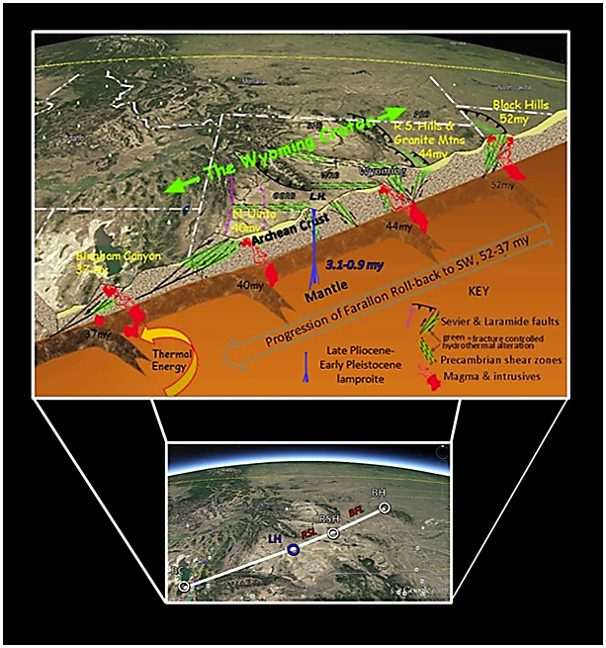 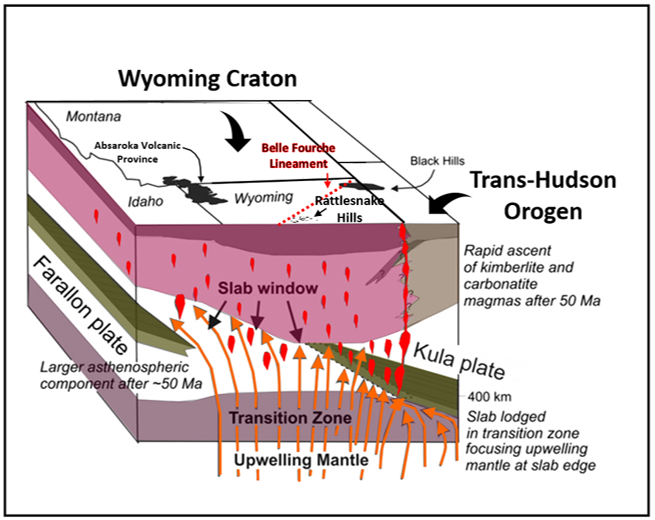 ​The first discovery of gold in Wyoming is unknown. Stories of Spanish conquistadors mining gold ore are of unknown authorship and origin. The “Spanish Diggings,” 24 miles north of Guernsey, Wyoming, was not a gold mine but a Plains Indian rock quarry used for thousands of years. An American Fur Company trapper discovered placer gold in the Sweetwater River about 1842, but was killed by Indians before he could profit from his find. At the time this was Indian territory and prospectors were largely excluded from the region. Twenty-five years later the source of the gold was discovered at the southern edge of the Wind River Mountains in the South Pass greenstone district (Carissa Mine).

​The Rattlesnake Hills greenstone belt was overlooked until a Wyoming State Geological Survey economic geologist discovered gold at the “Lost Muffler Mine” in 1982 (Hausel, 1996). A Precambrian chert sample yielded a gold grade of 7.55 grams per tonne (g/t). For gold, less than 2 g/t is considered low grade, and greater than 6 g/t is considered high grade. Gold exploration has been ongoing since. Two types of gold mineralization are recognized, stratabound and dispersed (Hausel, 1996). The stratabound ore deposits include breccias, veins, and banded iron formation and are primarily in Archean greenstone units. Tectonism largely controlled emplacement of the ore. Mineralization is parallel to foliation and aligned with shear zones, faults and fractures. Ore also occurs in stockworks (complex network of structurally controlled, randomly oriented fracture veins) of the Precambrian granite and gneiss. Dispersed deposits occur in the Tertiary intrusions, breccias, veins and surrounding wall rock (fractured metagraywackes or metamorphosed dirty sandstones). 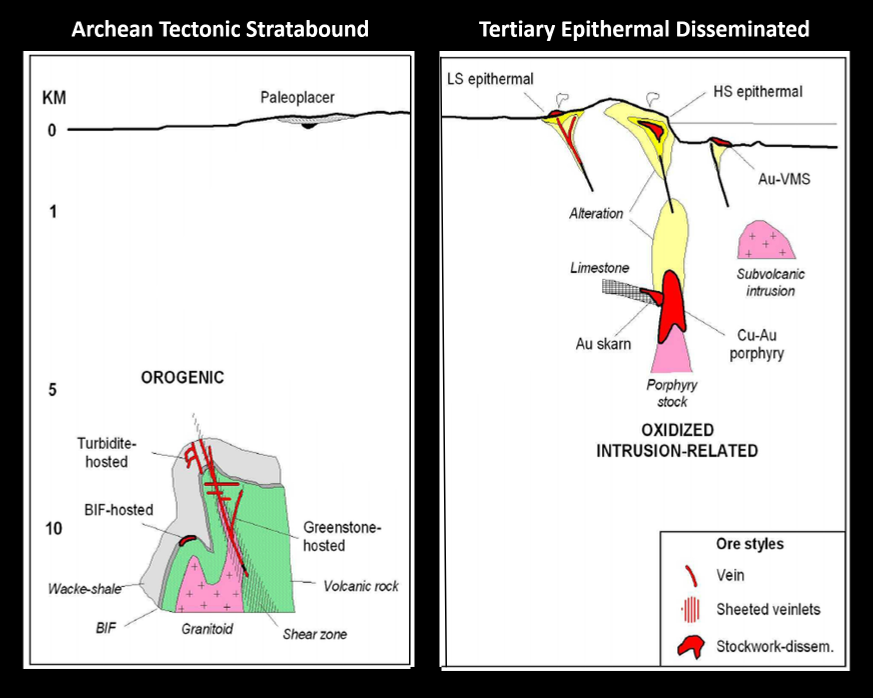 Two primary mineralization types in the Rattlesnake Hills.
Image: After Robert, F., Brommecker, R., Bourne, B. T., Dobak, P. J., McEwan, C. .J., Rowe, R. R., Zhou, X., 2007, Models and Exploration Methods for Major Gold Deposit Types: Proceedings of Exploration 07: Fifth Decennial International conference on Mineral Exploration, Paper 48, Fig. 1, p. 692; https://www.researchgate.net/publication/284574136_Models_and_exploration_methods_for_major_gold_deposit_types
​Currently, there are no operating gold mines in Wyoming. Exploration efforts in the Rattlesnake Hills have identified four promising areas of significant mineralization: 1) North Stock (aka Sandy Mountain), 2) Antelope Basin, 3) South Stock (aka Oshinan Hill), and 4) Blackjack. Drilling has intersected broad zones of low grade gold and silver mineralization, and narrow discrete zones of high grade precious metals in all four areas. The North and South Stock mineralization is found in veins and breccias surrounding diatremes (volcanic pipes formed by gaseous explosion). The North stock is a phonolite intrusive while the South Stock is an intrusive of alkali trachyte (aka soda trachyte: feldspar and dark minerals that are rich in sodium) with multiple feeder zones. Antelope basin contains disseminated gold within a quartz monzodiorite (quartz latite with more plagioclase than alkali feldspar) and schist. There are no outcrops in the Blackjack area, but it appears to consist of Tertiary volcanic breccia surrounded by Archean granite and gneiss that have mineralized quartz veins. Discovery was from surface and soil sampling of significant gold and silver mineralization. One core intersected 60 feet of 0.79 g/t gold and 36.86 g/t silver, and 175 feet of 0.36 g/t gold and 10.62 g/t silver. 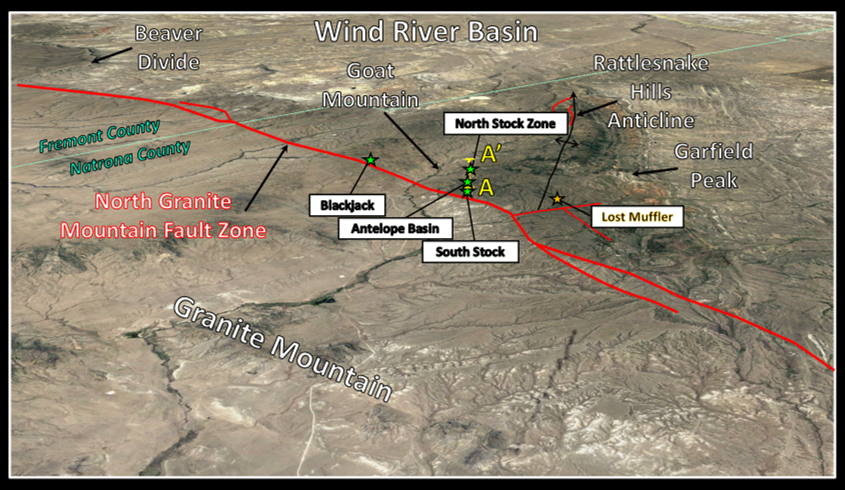 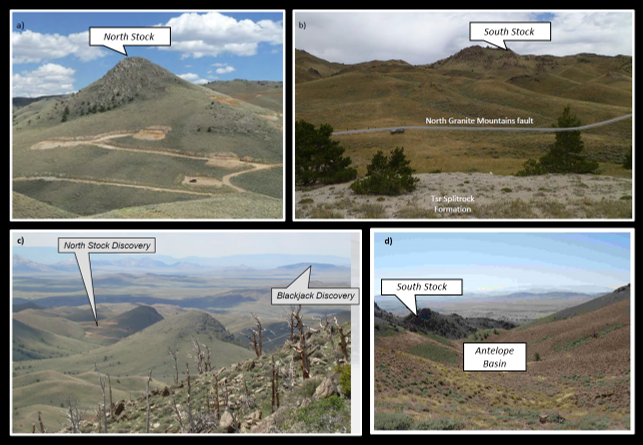 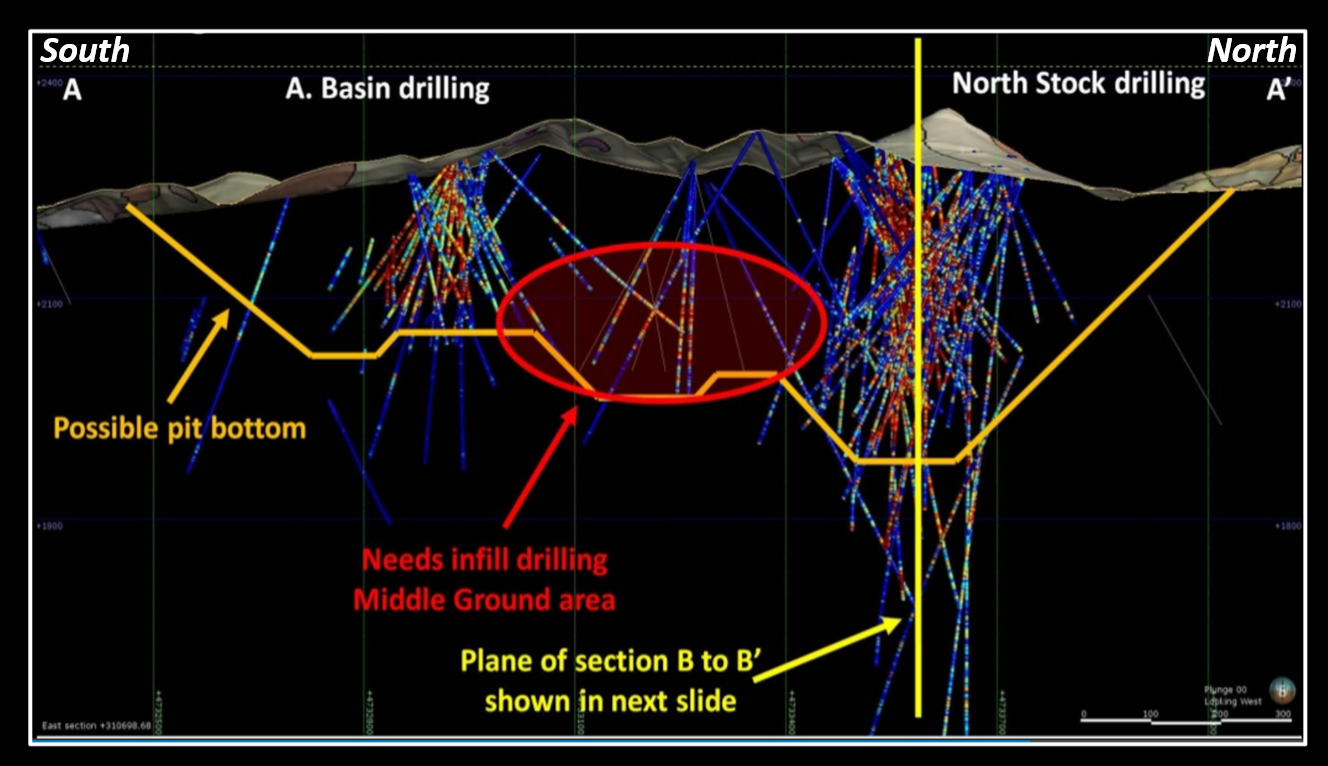 GFG Resources image of exploration drilling in the North Stock area with colors representing gold mineralization grade in grams per metric ton (g/t). Hot colors have the higher gold grade. Gold line shows a potential open pit mine with maximum depth less than 2,0000 feet. Cross section length is about one mile (1.5 kilometer).
Image: After https://www.slideshare.net/GFGResources/gfg-resources-inc-corporate-presentation-november-2016-68082456
It is uncertain if the Rattlesnake Hills gold deposits will become an active mining project. That will be determined as the issues of type, grade, size of mineralization and mining method are more fully understood. The project is at an intermediate stage of exploration and results have been promising. The area is in an Archean gold-bearing greenstone belt that underwent several episodes of deformation and metamorphism. Subsequent Tertiary alkaline intrusions have further concentrated ore bodies by magmatic and hydrothermal fluids. The main host rock are diatreme breccias and veins. Structural setting is at the intersection of three major features that provided permeable migration routes for ore-bearing fluids. Exploration drilling has documented significant concentrations of gold and silver, with potential for expansion. Project economics are unclear, but one thing is certain, the namesake residents of the hills will be watching. 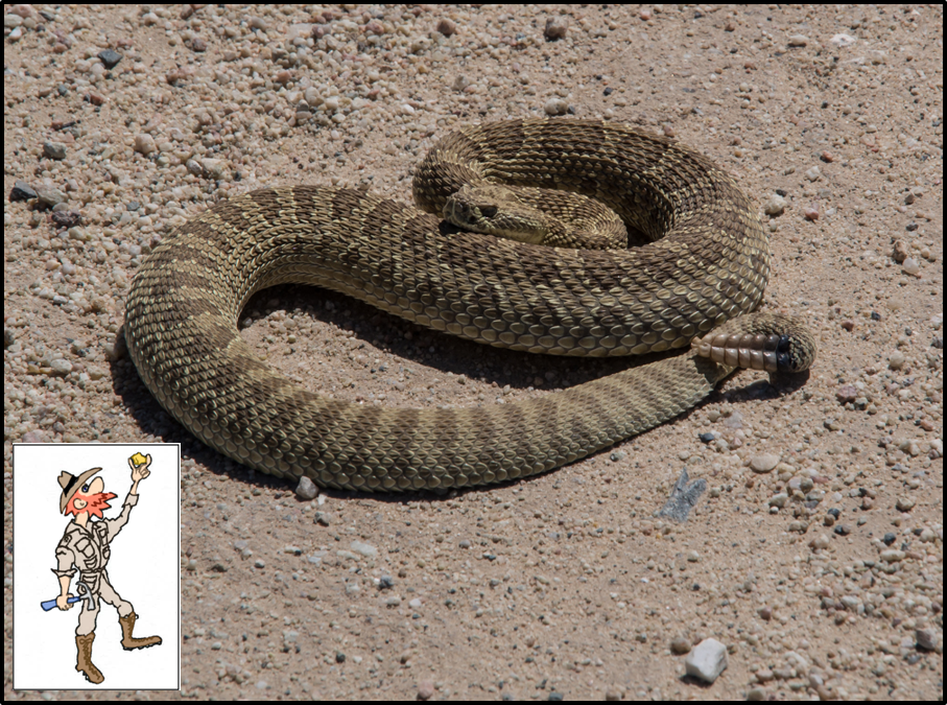 Namesake of the Rattlesnake Hills coiled and buzzing.
Image: After http://www.billcaid.com/2013/WesternRoadTrip20130514/Part12/Part12.html 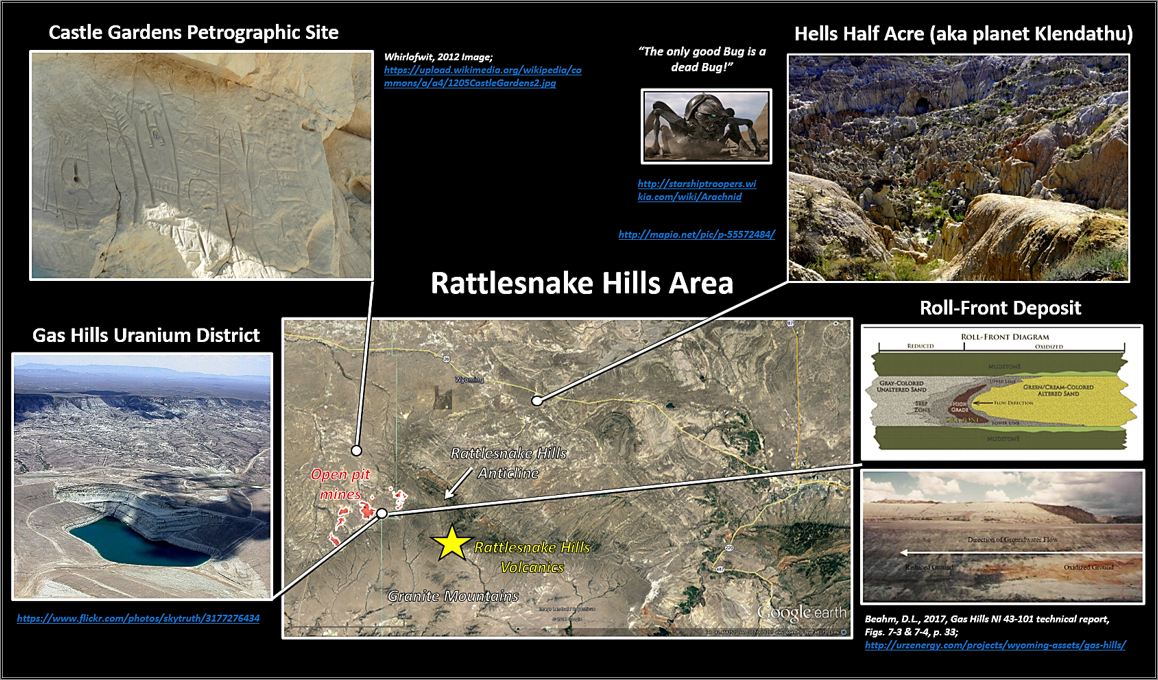 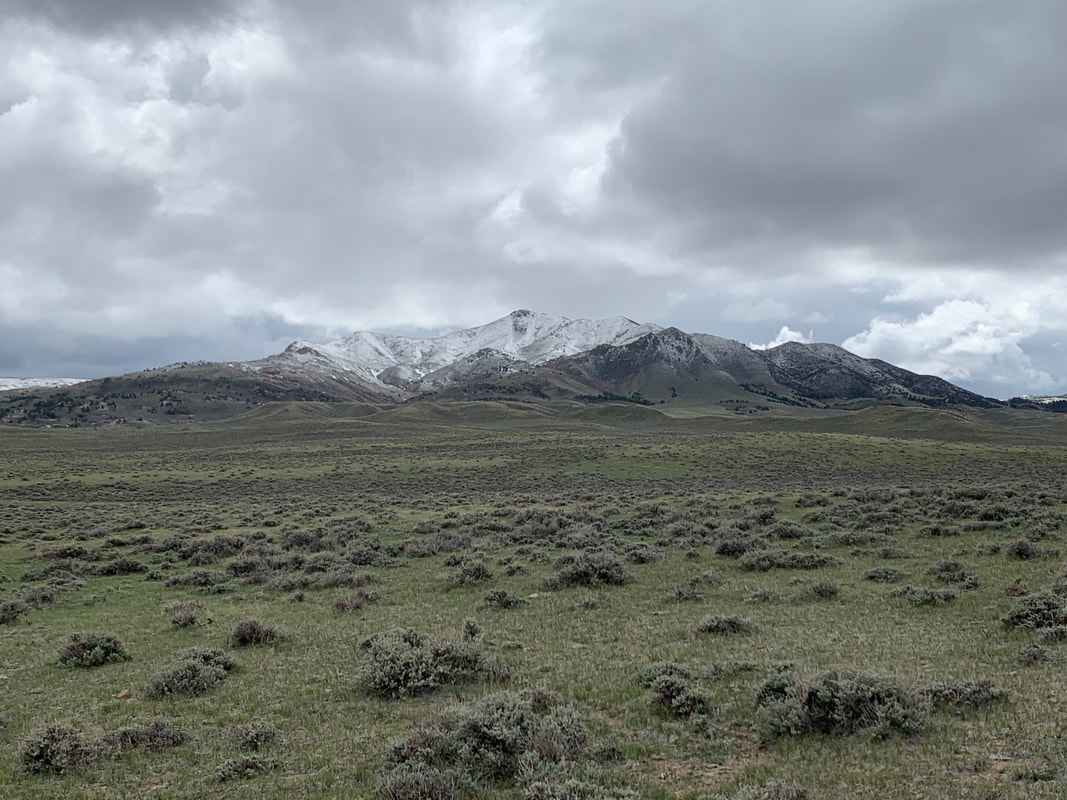