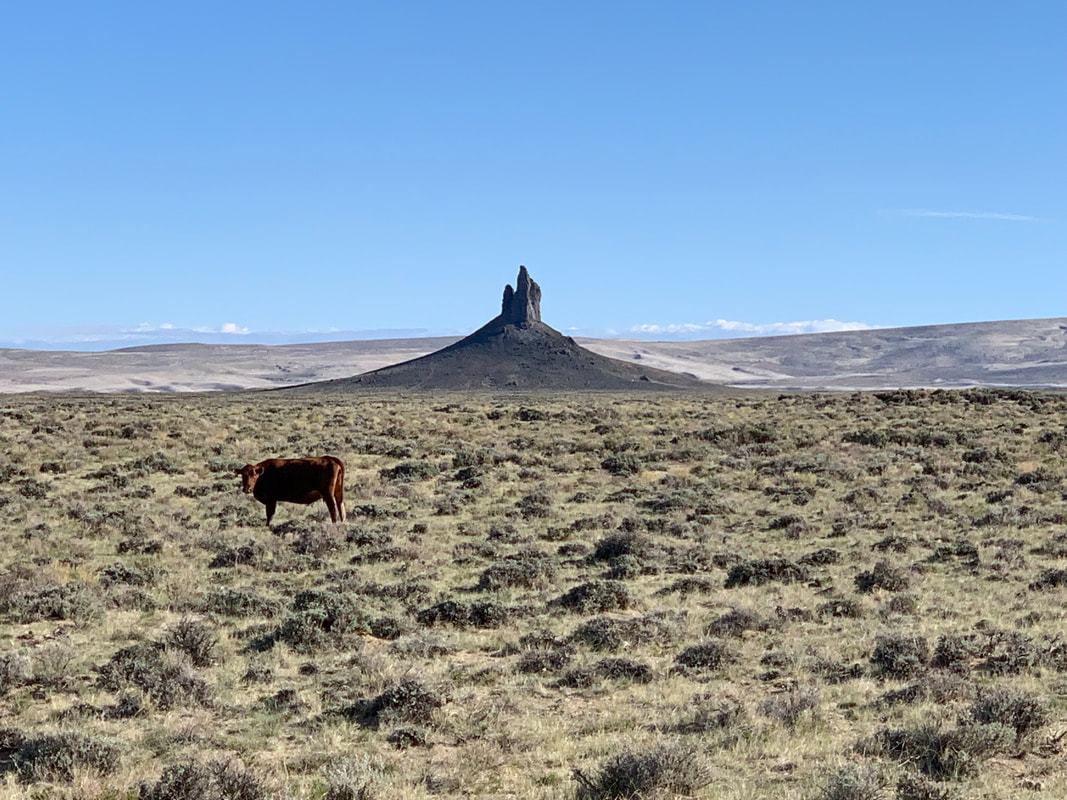 The Leucite Hills are on the north flank of the Rock Springs Uplift, 30 miles northeast of Rock Springs. They are a series of mesas and buttes whose tops, rising hundreds of feet above the floor of the Red Desert, mark a former level of the basin floor. They were named by the 40th Parallel Survey in 1871 for the mineral Leucite contained in the rocks. This was the first discovered occurrence of leucite-bearing rocks in North America. The hills are the eroded remnants of a late Pliocene- to early Pleistocene-age (3.1-0.9 million years ago) volcanic field. Today geologists call these rare ultra-potassic, mafic igneous rocks lamproites. The name lamproite originates from the Greek word “lampro” meaning "glistening,” a reference to the mica crystals (phlogopite) that characterize this type of volcanic rock.

Left: Southeast view of the Boars Tusk (right center) to the mesas of North, Middle and South Table Mountains (distant horizon). These features are part of the Leucite Hills volcanic field that developed along the northern flanks of the Rock Springs Uplift. This is an area that has been called the Big Empty. The elevated ground in front of the Table Mountains is dipping Cretaceous rocks on the north-plunging nose of the Rock Springs anticline.
Right: West view of the Boars Tusk with encroaching Killpecker dunes. This is one of the largest active sand dune fields in North America (109,000 acres). They are also noted for their “singing” ability. The volcanic neck contains sedimentary xenoliths of Wasatch and Green River Formations, granitic xenoliths from continental crust, and brecciated lamproite from the mantle. Ridgeline in the distance exposes paleolake beds of Eocene Lake Gosiute (Tertiary Green River Formation) on White Mountain.
Image: Left: Ogle, Ed, 2013, The Boars Tooth, https://en.m.wikipedia.org/wiki/Boars_Tusk#/media/File%3AThe_Boar's_Tusk_(30800758975).jpg;
​Right: Wick, Bob, 2016, BLM Image, http://mypubliclands.tumblr.com/post/132968255757/boars-tusk-is-the-most-prominent-feature-within-a 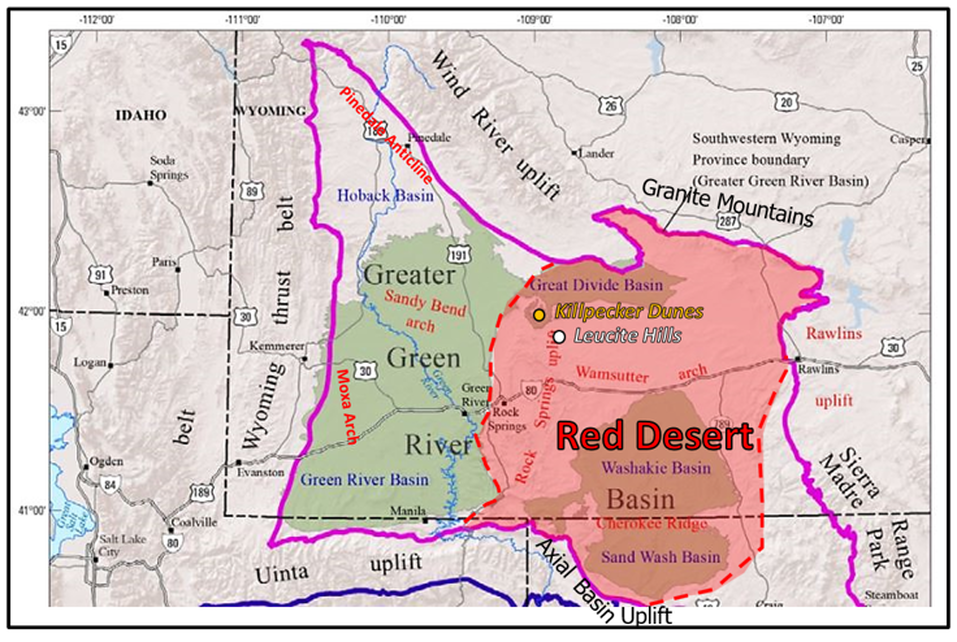 Greater Green River Basin sub basin terminology. The Red Desert Basin includes the Great Divide, Washakie, Sand Wash Basins and the Rock Springs Uplift area.
Image: After U.S. Geological Survey
The volcanic field lies in the north central part of the Greater Green River Basin. This large province in southwestern Wyoming is a Late Cretaceous to Eocene-age area of subsidence surrounded on three sides by structural arches created during the Laramide mountain building event (80 to 55 million years before present). The Wind River Range and Granite Mountains are on the north; the Rawlins Uplift and Sierra Madre on the east; and the Axial Basin uplift of Colorado, and the Uinta Mountains of Utah mark the southern boundary. The western margin is defined by the thrust belt structures created by the Sevier Orogeny (140 to 50 million years before present).

This vast basin consists of five positive areas and five sub basins as shown on the map above. The Rock Springs Uplift and the eastern portion of the Greater Green River Basin have been called the Red Desert since the government surveys of the 1870s. The named came from the soil color of the basin floor and the hues of the eroding Tertiary rocks. 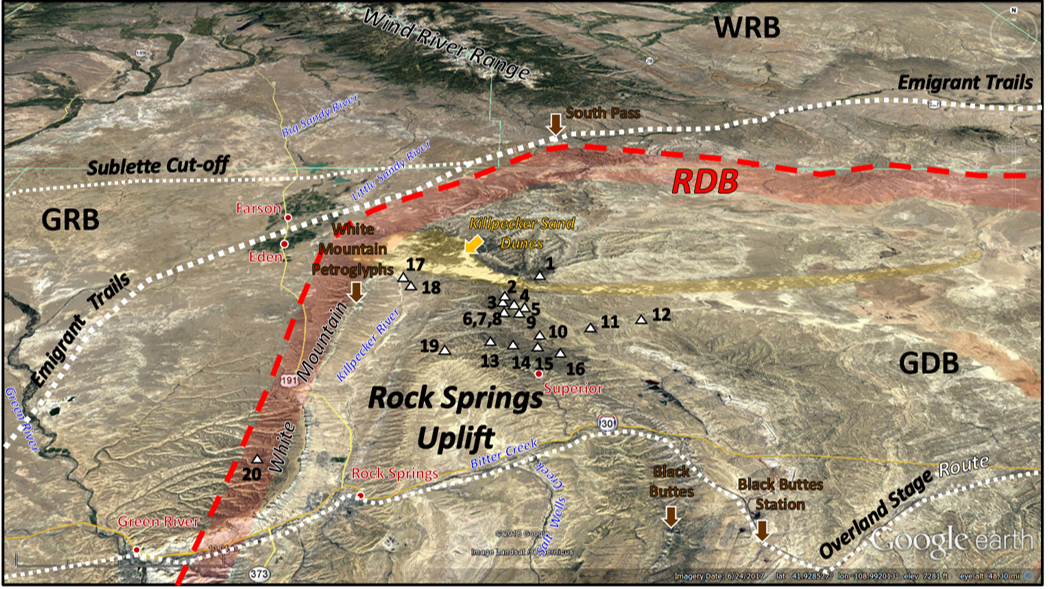 Image: Google Earth
​Historically, the Red Desert was considered an extension of the Great American Desert. This so called “land in between” was a place one needed to endure and cross as quickly as possible. The Oregon, California and Mormon trails skirted the northern and western edge of the Red Desert Basin. The Overland Stage trail, the Pony Express and the Transcontinental railroad followed Bitter Creek through the central part of the basin and the Rock Springs Uplift.

The major geologic structure within the basin is the Rock Springs Uplift. The uplift is a Laramide-age asymmetric anticline with a buried thrust zone on the west flank. The elevation of basement granite on the thrusts has folded Cretaceous rocks at the surface of the structure. Two regional linear structural elements (lineaments) intersect on the northeastern flank of the uplift. These features are thought to be the result of Proterozoic tectonic events on the Wyoming craton. Many of the Leucite volcanic field features align with the northwest trending Farson Lineament. Pilot Butte, the southwestern volcanic outlier, is located north of the northeast trending Rock Springs Lineament. A third feature, called the Killpecker shear system, is an east-west trending structure is shown on the Leucite Hills geologic map (Hausel, 2003). This shear zone crosses the northern portion of the volcanic field and may conceal hidden olivine lamproites (Erlich and Hausel, 2002). The intersection of these crustal structures created fracture zone pathways that the deep sourced lamproites could intrude. 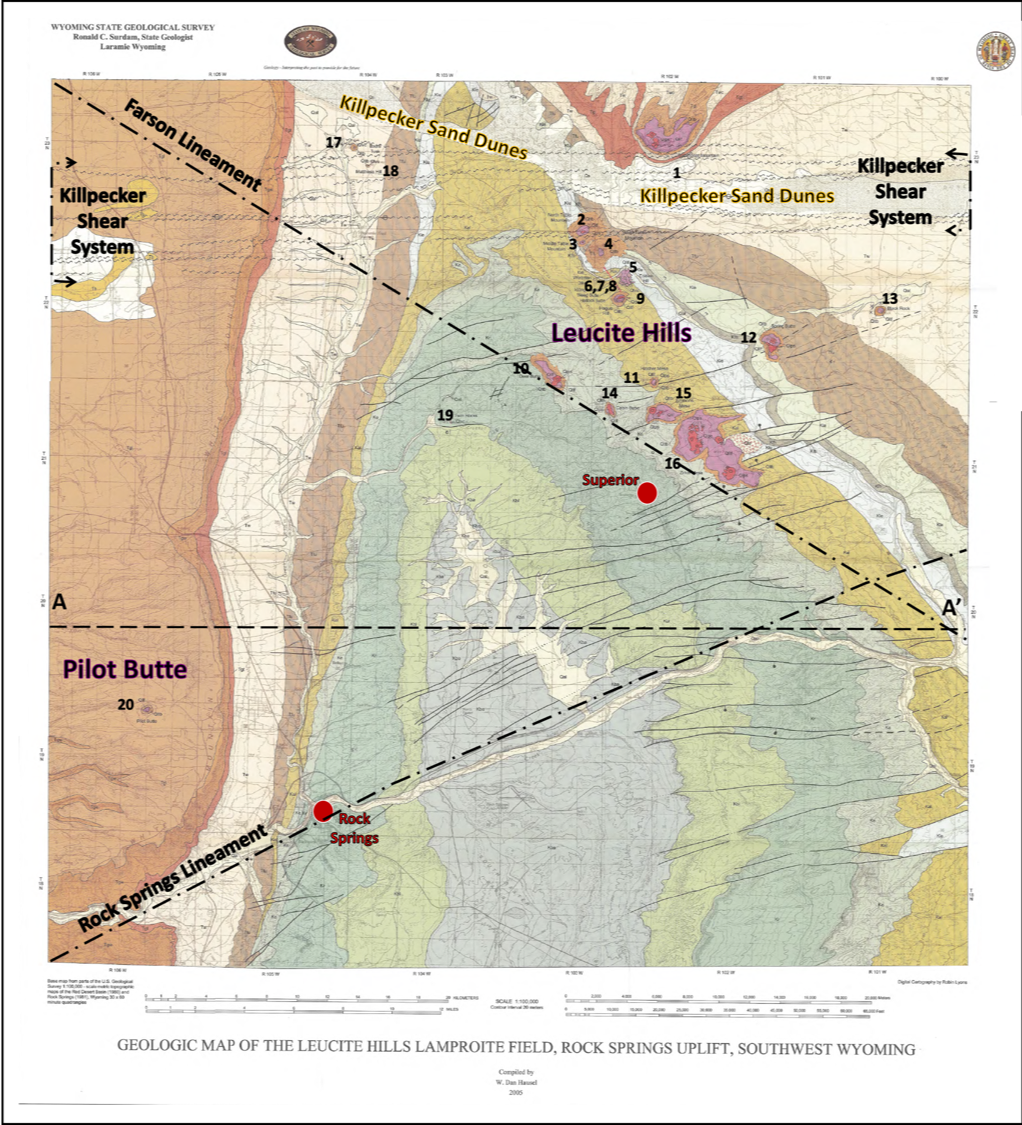 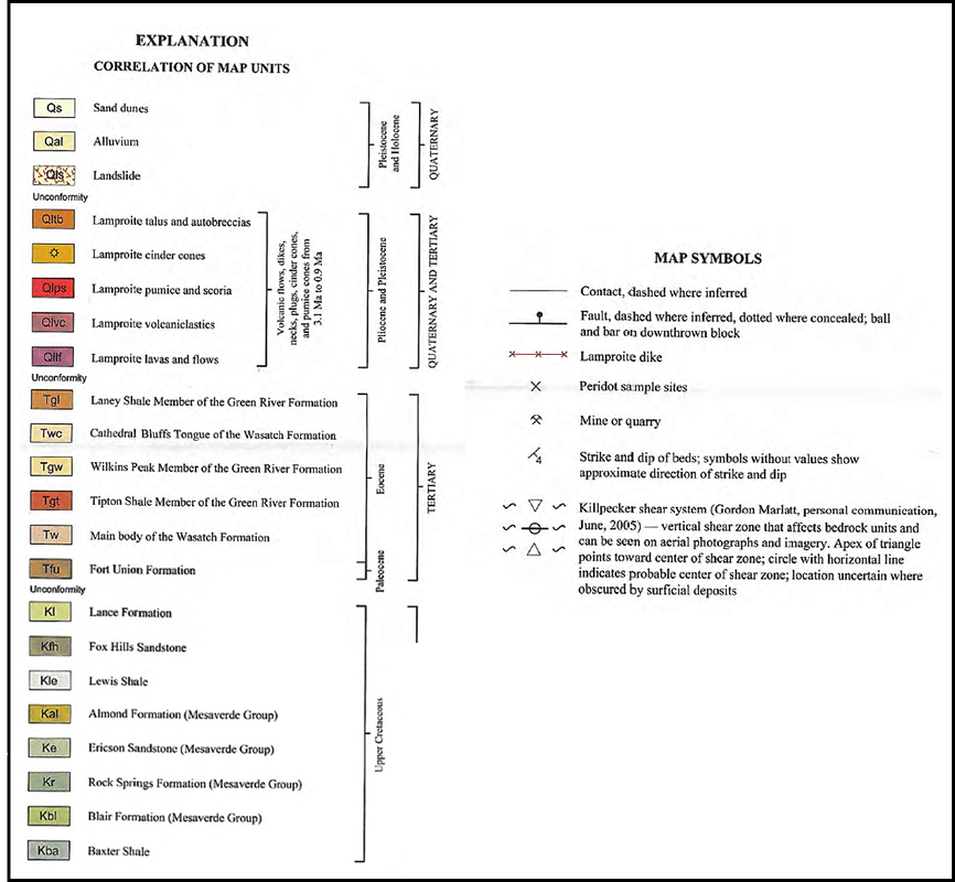 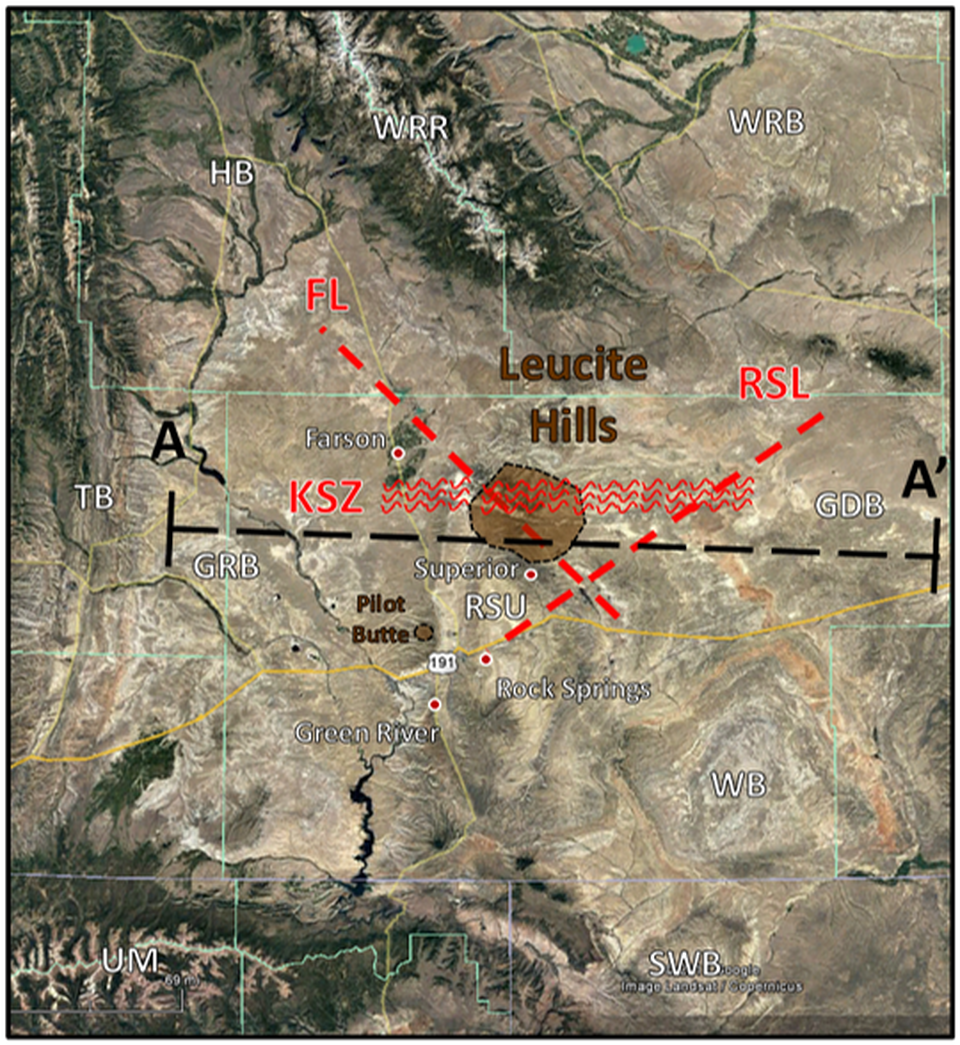 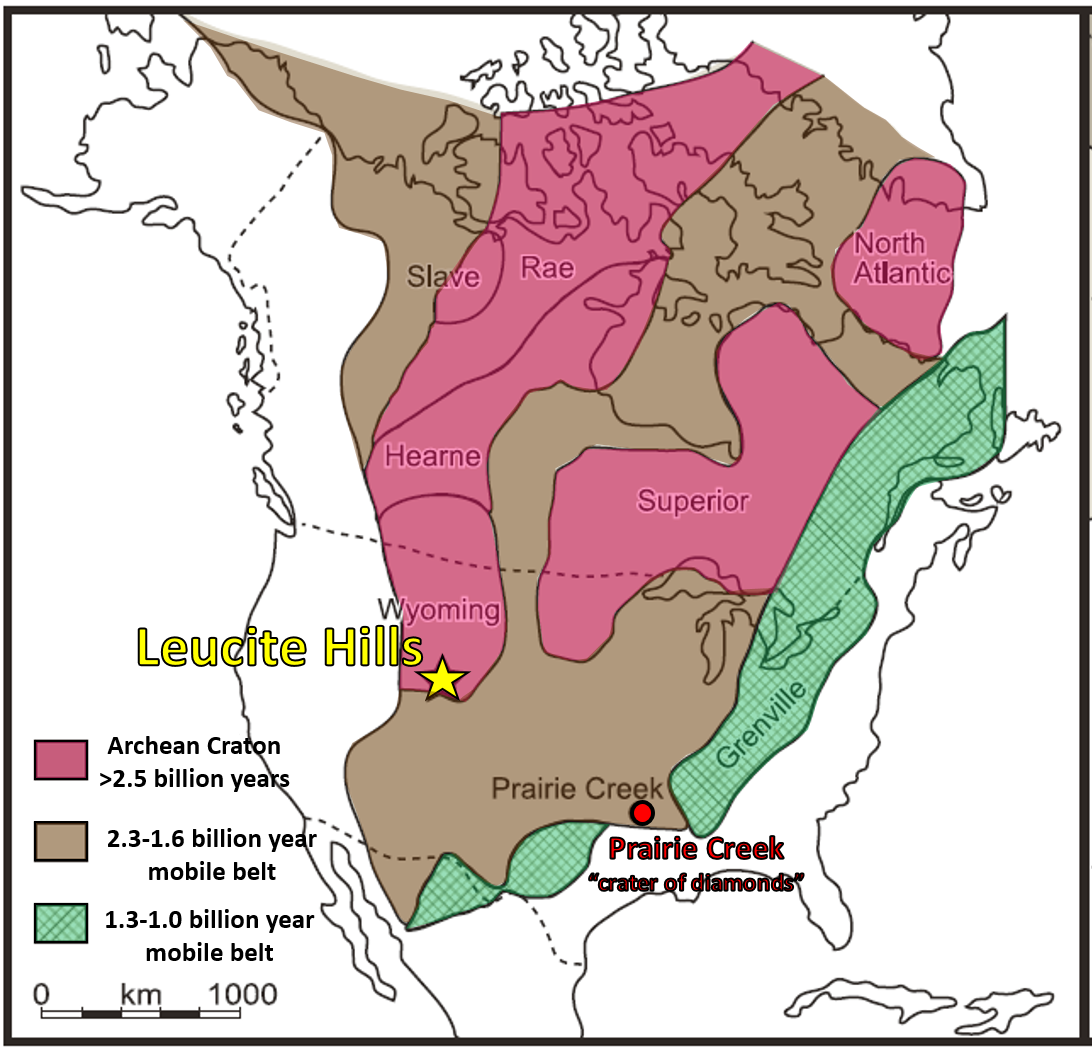 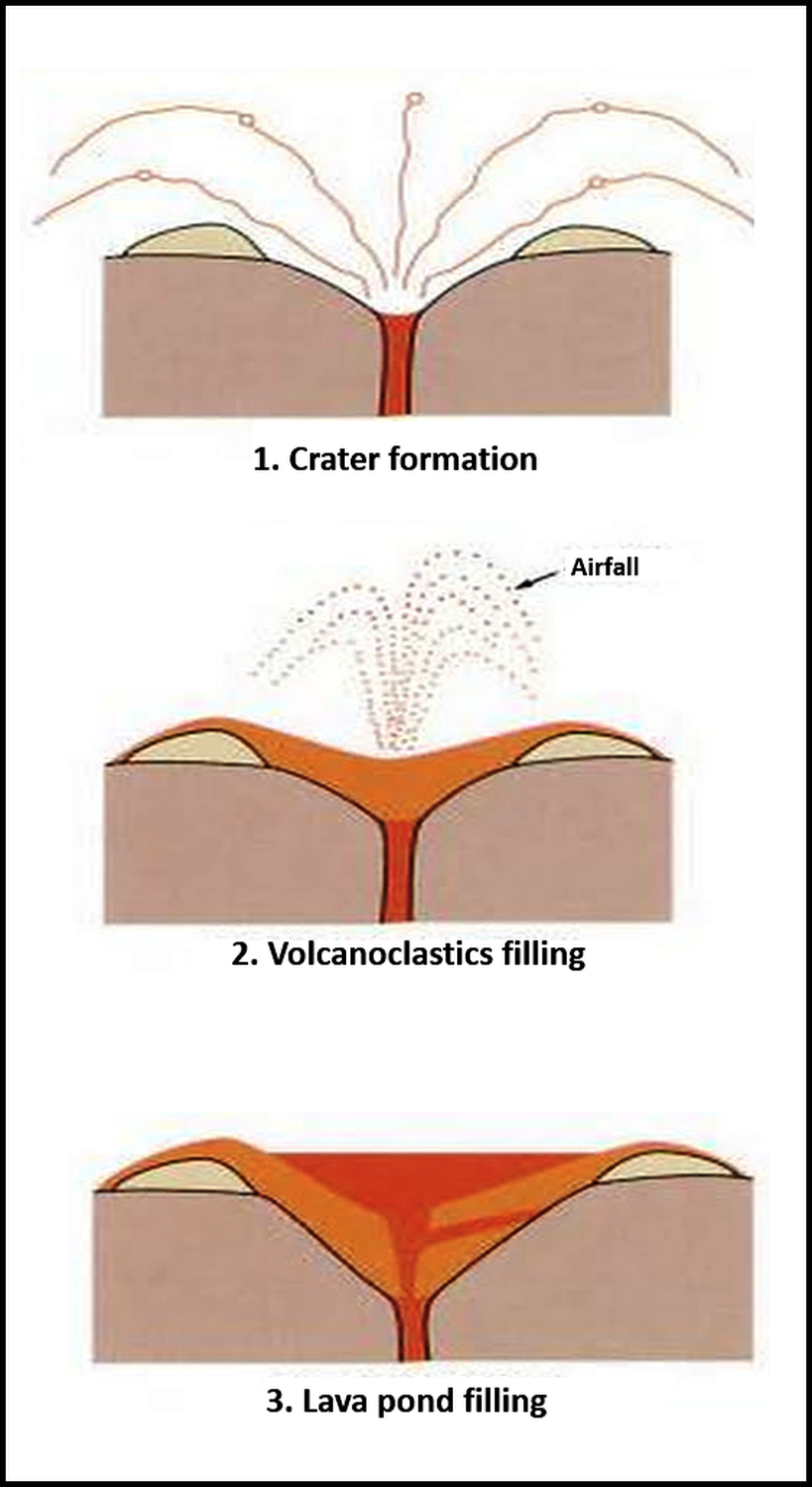 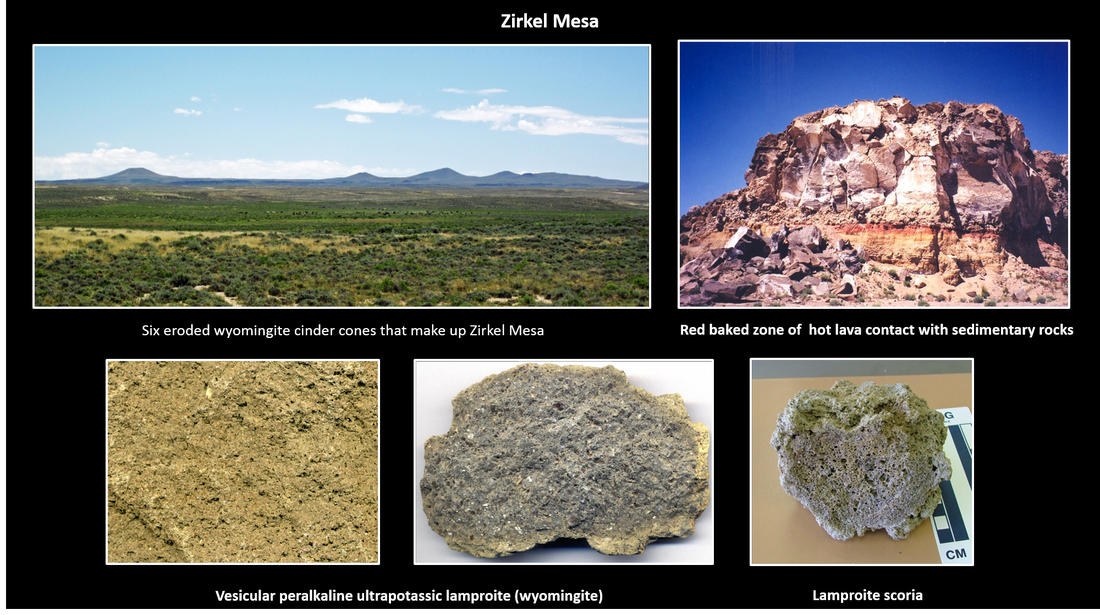 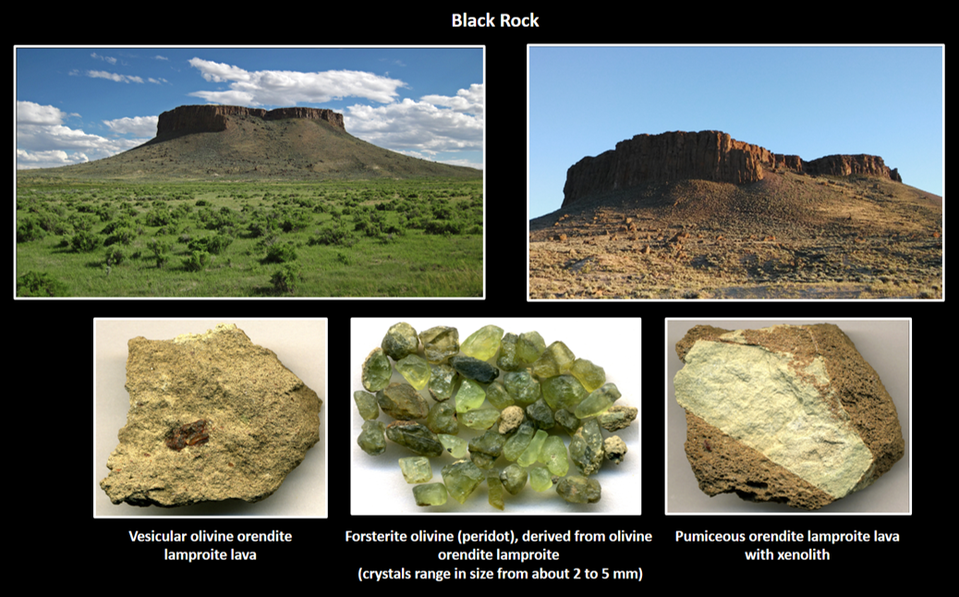 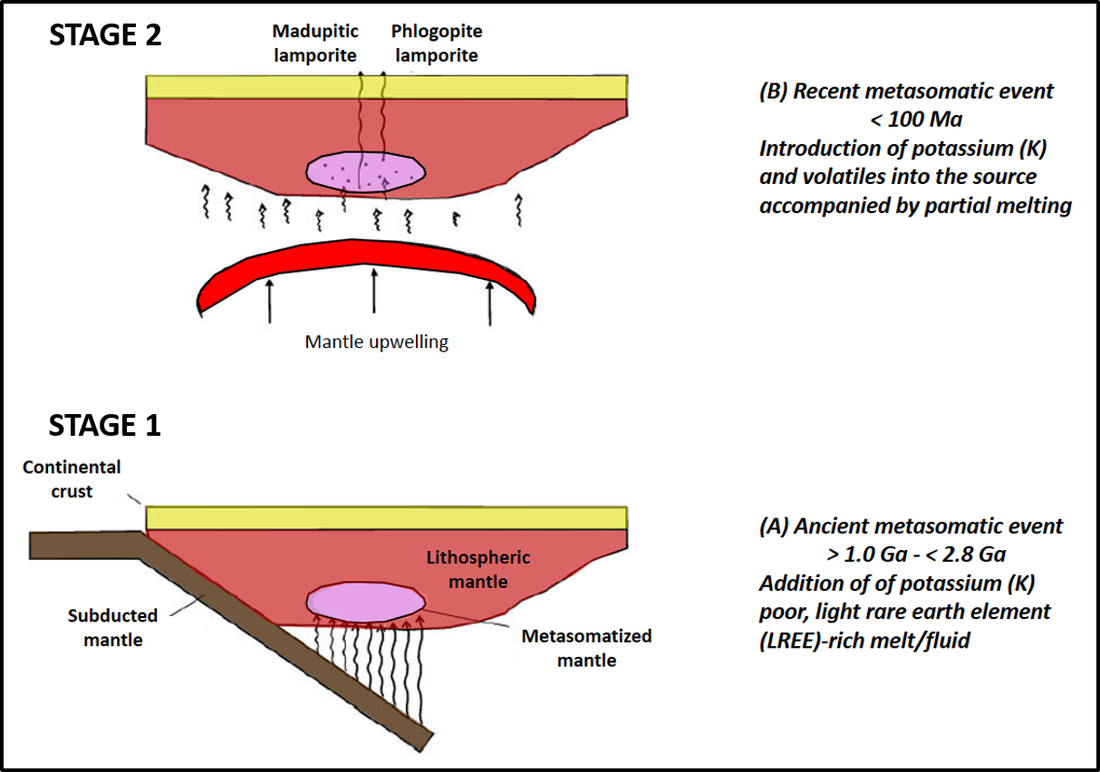 Metasomatic stages of Leucite Hills source evolution. The model is based on the incompatible elements and volatile contents of the two major types of lamproite in the Leucite Hills and melting experiments of primary lamproites. Ma: million years; ago, Ga: billion years ago.
Image: After Mirnejad, H. and Bell, K., 2006, Origin and Source Evolution of the Leucite Hills Lamproites: Evidence from Sr–Nd–Pb–O Isotopic Compositions: Journal of Petrology, Vol. 43, No. 12, Fig. 11, p. 2478; https://academic.oup.com/petrology/article/47/12/2463/1564947
Diamonds were discovered in the Prairie Creek diatreme, Arkansas in 1906. The intrusion was emplaced during the Albian Stage of the Cretaceous, 106 million years before present. The diamonds were dated at 3.2 billion years before present. Until the late 1970s, the host rock was thought to be kimberlite. With the discovery of diamonds within the Argyle lamproite pipe of western Australia in 1979, renewed analysis of the Prairie Creek igneous rock showed that the “crater of diamonds” in Arkansas was a lamproite (olivine lamproite and diopside madupitic lamproite).  Mining attempts at Prairie Creek proved not to be commercially successful. All the seven known diamondiferous lamproites in the world are found in olivine-bearing lamproite. The Leucite Hills have both olivine- and leucite-bearing lamproites.

The Wyoming State Geological Survey unsuccessfully tested Endlich Hill, South Table Mountain, Wortman dike and Black Rock for diamonds in the early 1990s. To date no diamonds have been found in the Leucite Hills volcanic field but total sample weight has been relatively small (about 500 pounds), and results may be undiagnostic (Hausel et al., 1995, WGA). Based on the geology and geochemical signature of chromite minerals recovered, has led one geologist to predict “Diamonds will be found” in the Leucite Hills lamproites. (Hausel, 2008).

Meanwhile, ants near Black Rock mined 13,000 carats of flawless peridot to decorate their nest hills. It would be good to remember that when exploring for precious stones: 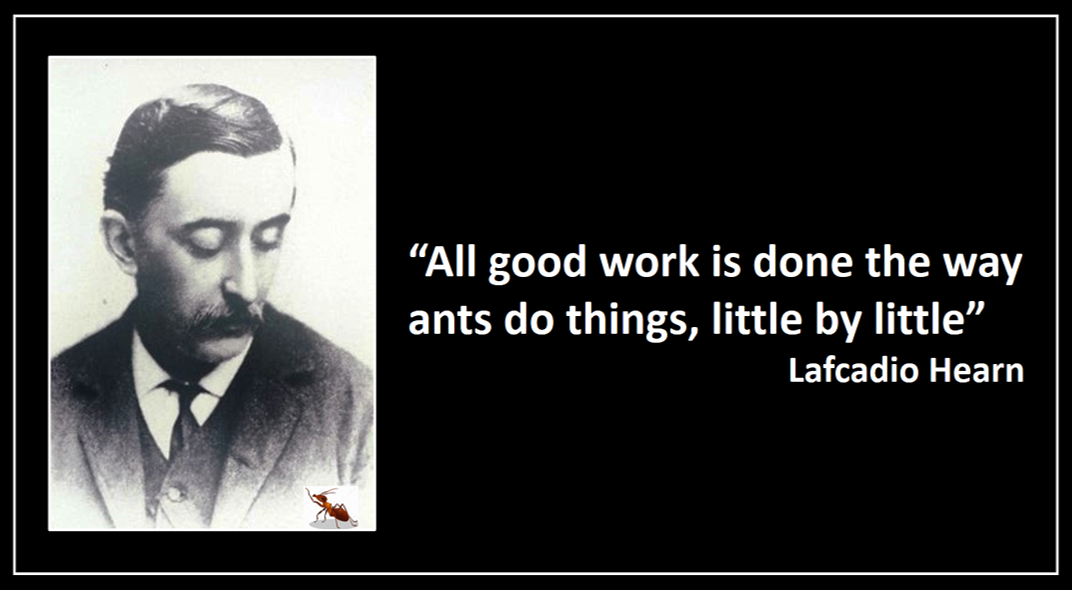 The Wyoming Geological Association has published a geologic road log for the Leucite Hills by Hausel, Love and Sutherland in Jones, R.W. and Winter, G.A. (editors), 1995, Resources of Southwestern Wyoming: WGA 1995 Field Conference Road Logs, p. 45-53. There is also a short self-guided road log on the Gemhunter website at http://leucitehills.blogspot.com/2009/02/self-guided-field-trip-to-leucite-hills.html

The Wyoming State Geological Survey has additional information at http://www.wsgs.wyo.gov/ 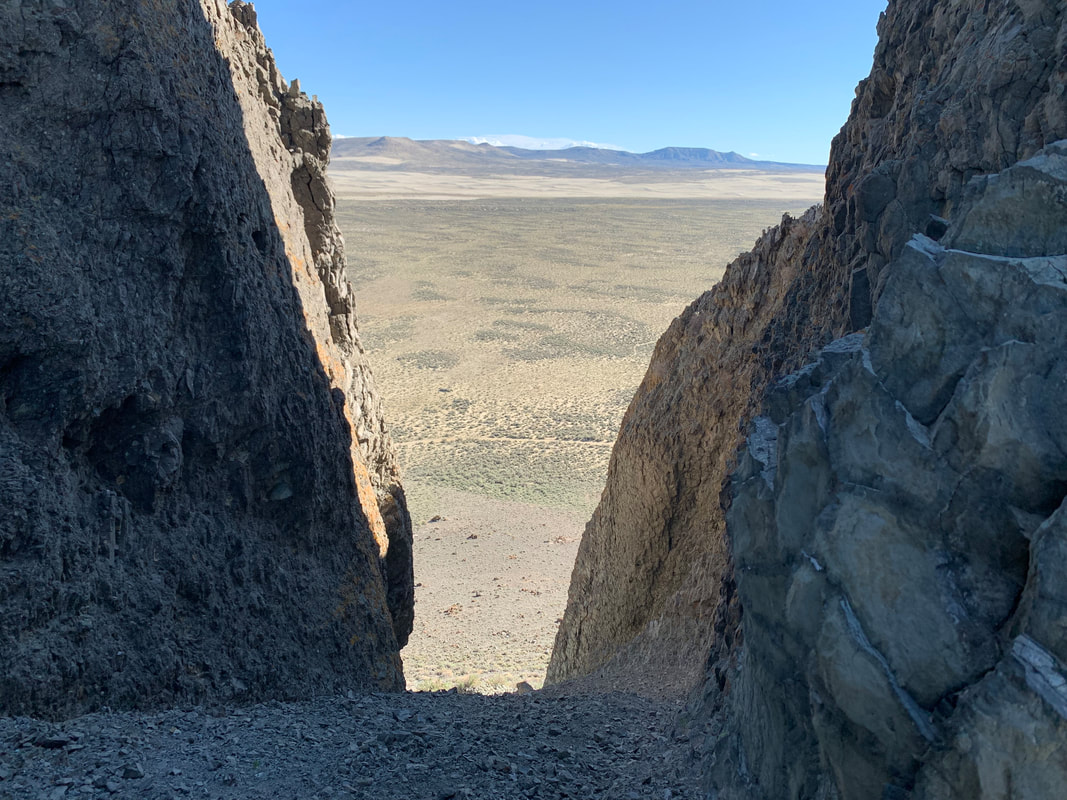 Northeast view from notch in Boar's Tusk with Killpecker Sand Dunes in distance
Image by Mark Fisher
​If you have a high clearance 4WD vehicle, our recommendation is to visit Boar’s Tusk, Killpecker Sand Dunes and White Mountain Petroglyphs. All three destinations are within ten miles of each other and depending on how much time you spend exploring, it could be a half day or a whole day outing. You should time your visit to miss the heat in the summer, snow drifts in the winter and mud after the rains or snowmelt. The BLM Rock Springs surface status map would be helpful for navigating. It is isolated Wyoming with minimal to no traffic and miles of gravel & dirt roads, some with mud and sand. The worst conditions we encountered were the last four miles of sandy two-track to Boar’s Tusk. 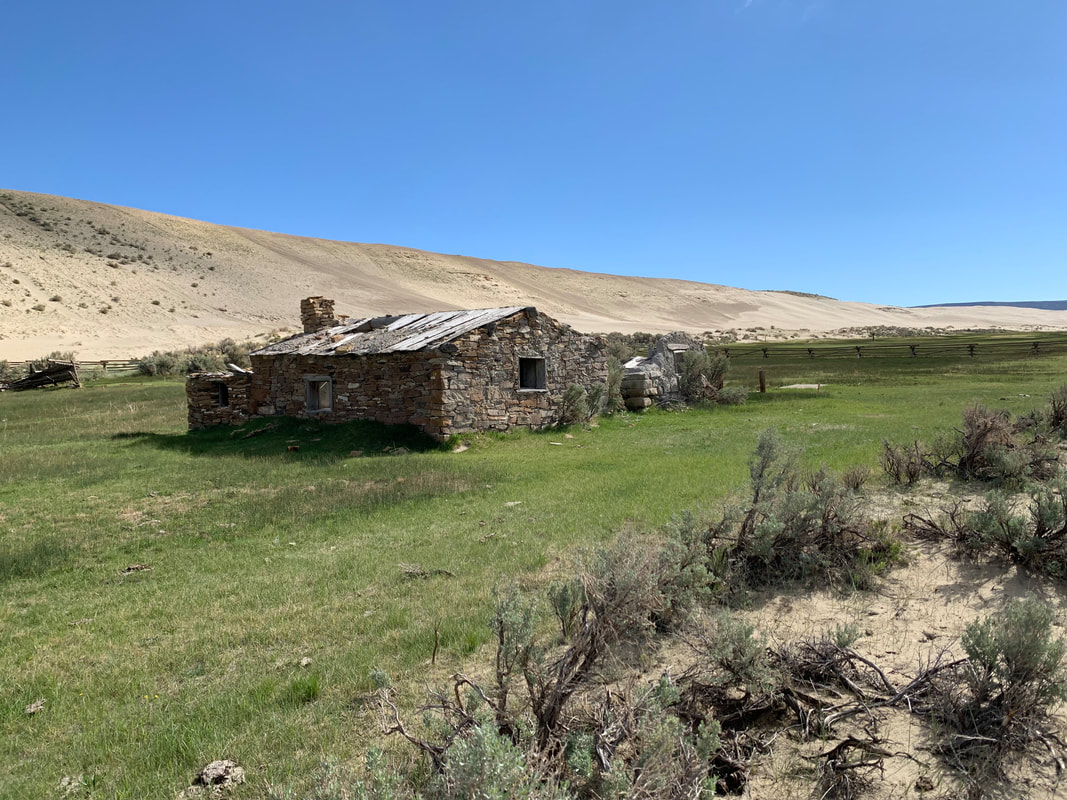 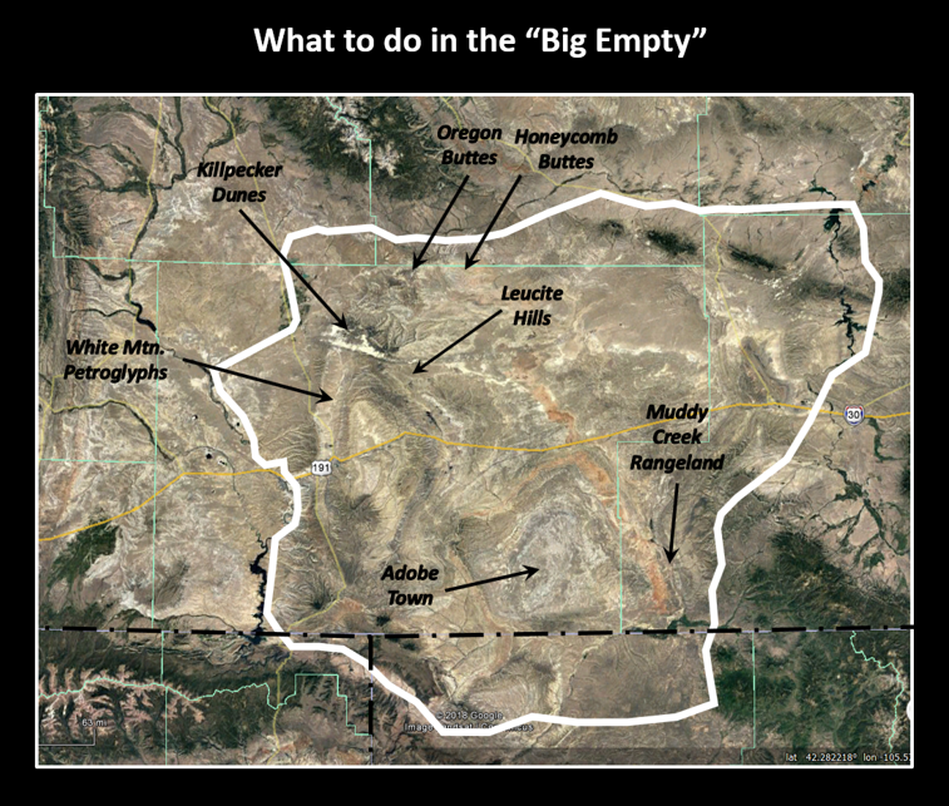 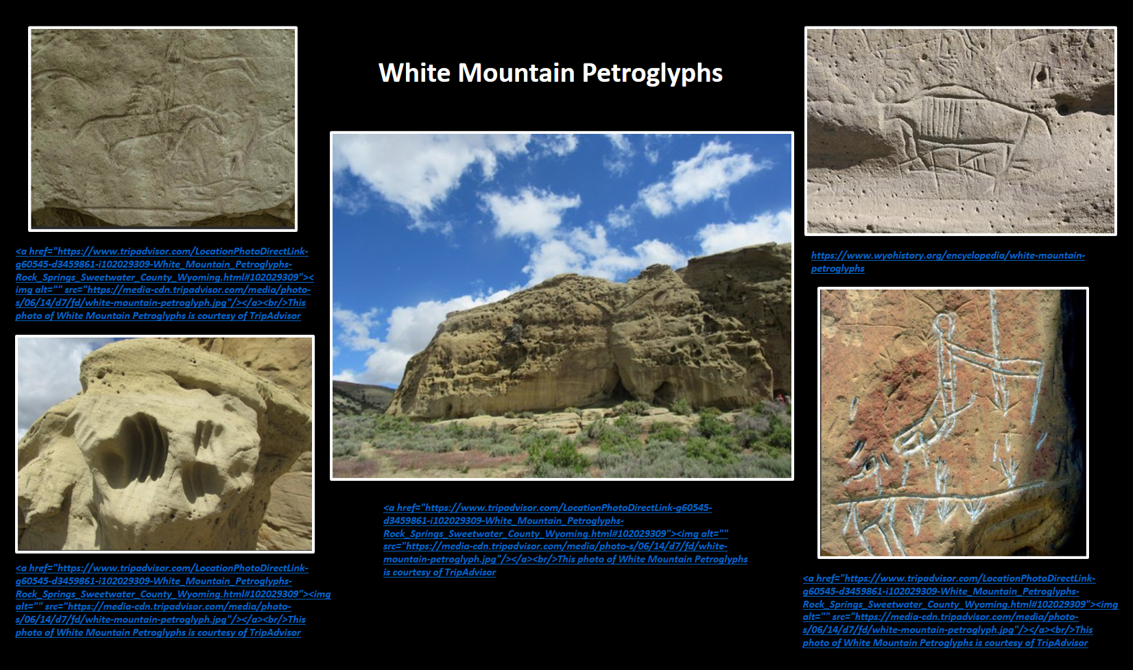 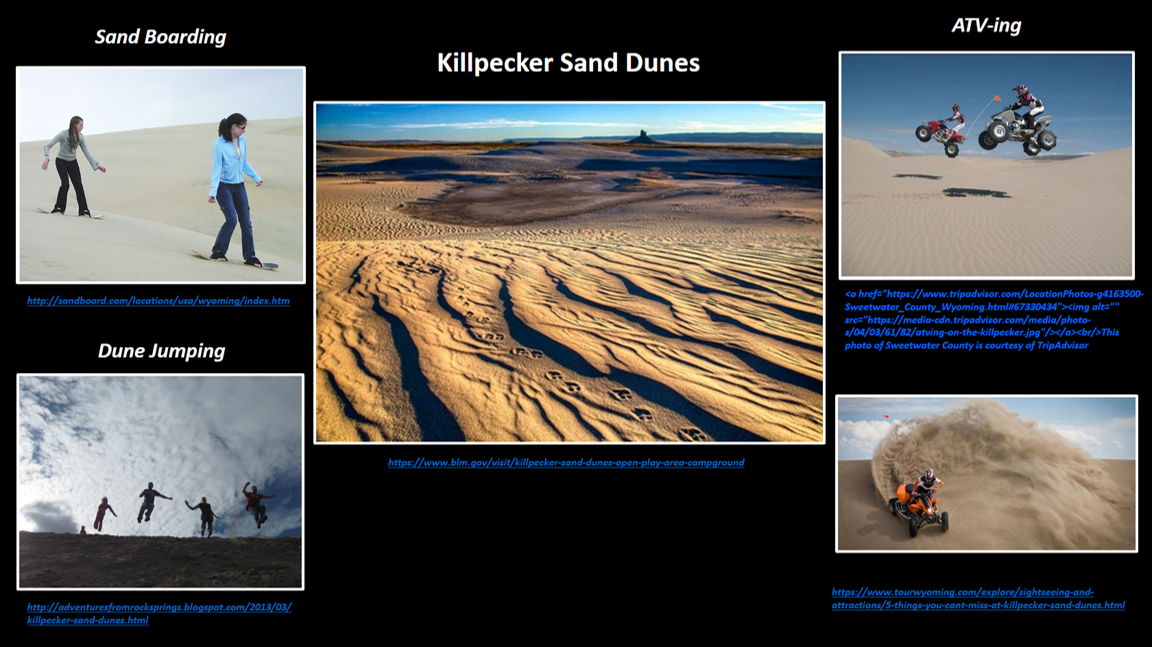 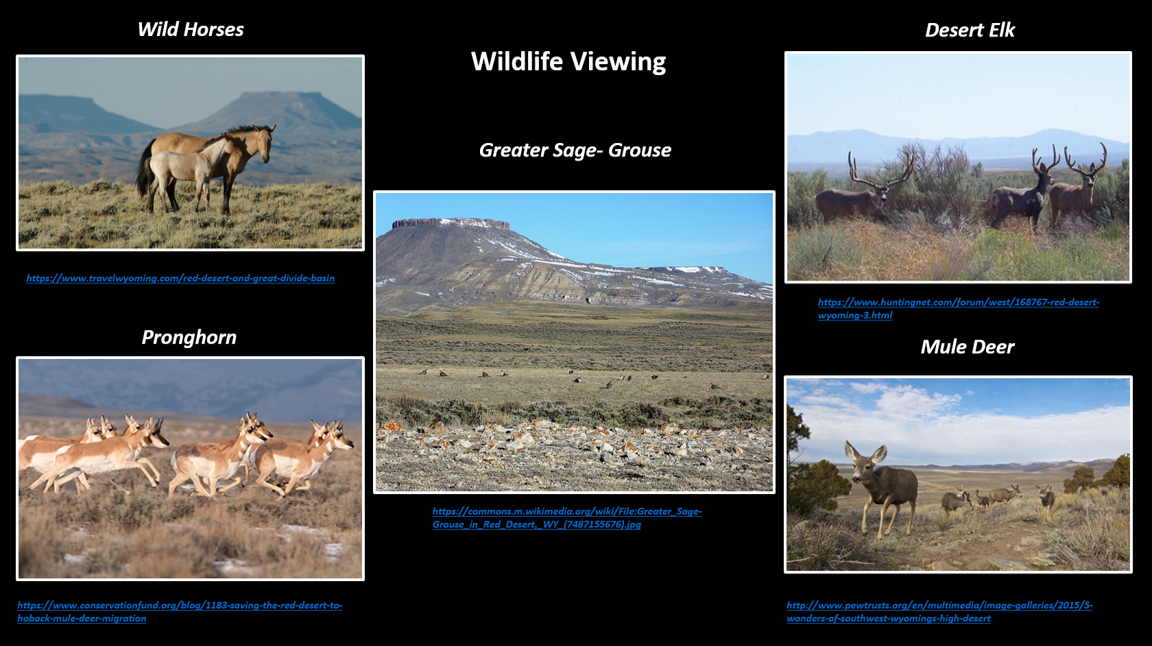 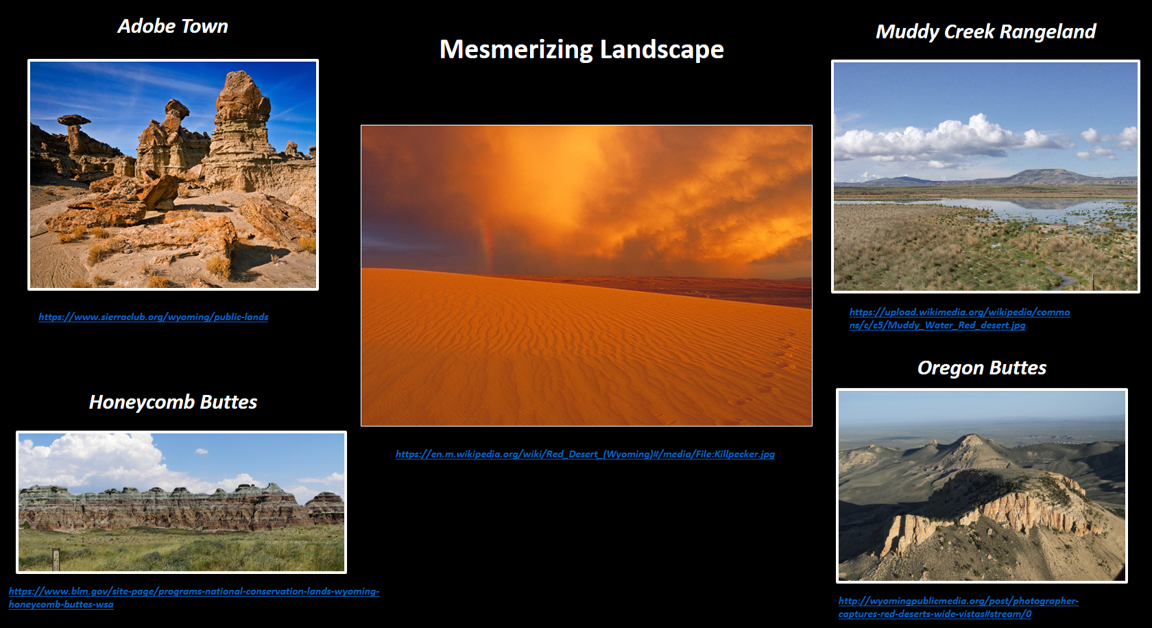