Meadow on the Rocky Mountain Continental Divide where a stream divides into two streams, one flowing to the Atlantic Ocean and the other to the Pacific Ocean. 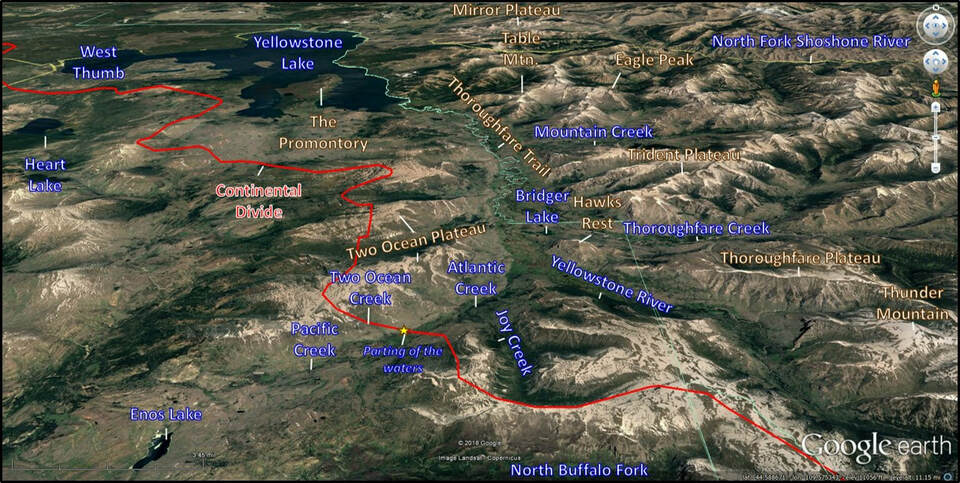 Two Ocean Divide Region north aerial view. The Continental Divide through northwestern Wyoming is shown by red line. Vent complexes of the Eocene age Absaroka volcanic field are labeled.
Image: Google Earth
When President Jefferson sent Lewis and Clark on their exploration of the Pacific northwest, he was hoping they would discover a river passage that could further the economic development of the country. Jefferson stated the purpose of the exploration in an 1803 letter to Lewis:

“The object of your mission is to explore the Missouri River, and such principal streams of it, as, by its course and communication with the waters of the Pacific Ocean, whether the Columbia, Oregon, Colorado, or any other river, may offer the most direct and practicable water-communication across the continent, for the purposes of commerce.”
(http://www.digitalhistory.uh.edu/disp_textbook.cfm?smtID=3&psid=3938)

About two and a half decades later Jim Bridger discovered a passage over the continental divide that divided the country into parts separated by water flow directions. It was a far cry from the commercial passage envisioned by Jefferson’s hopeful geography. Transcontinental travel by this route would only be possible by freshwater fish. 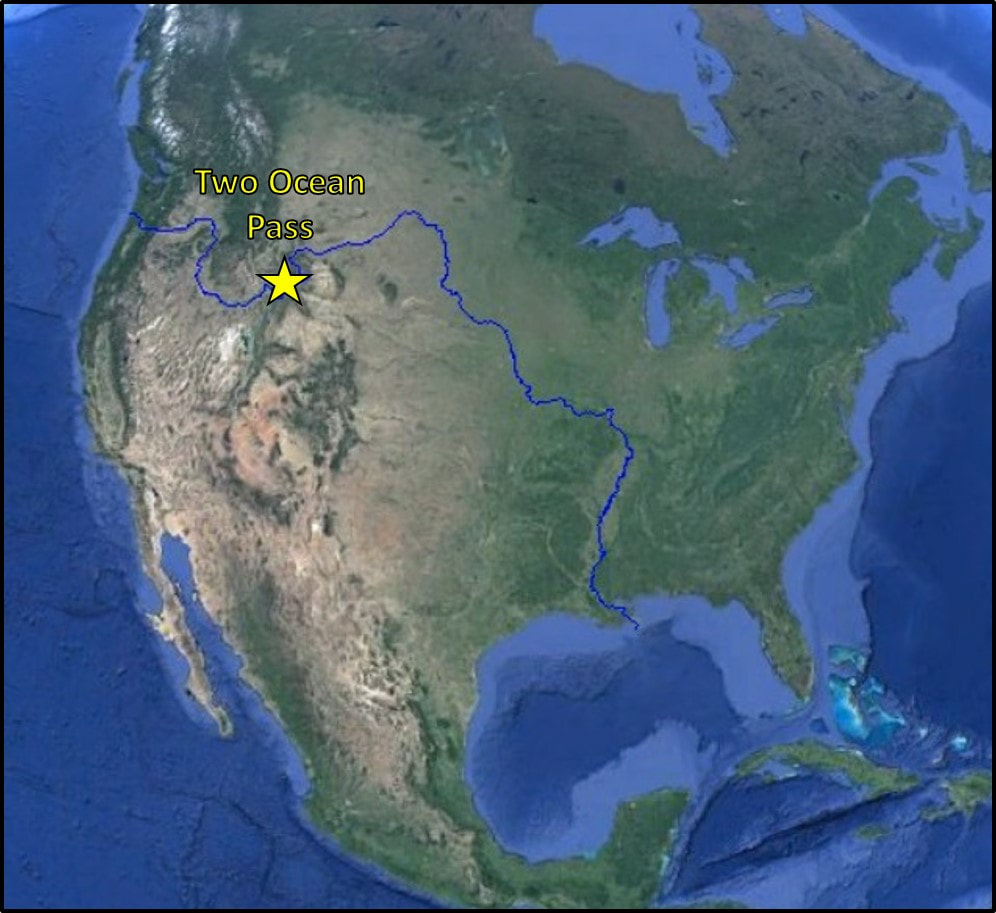 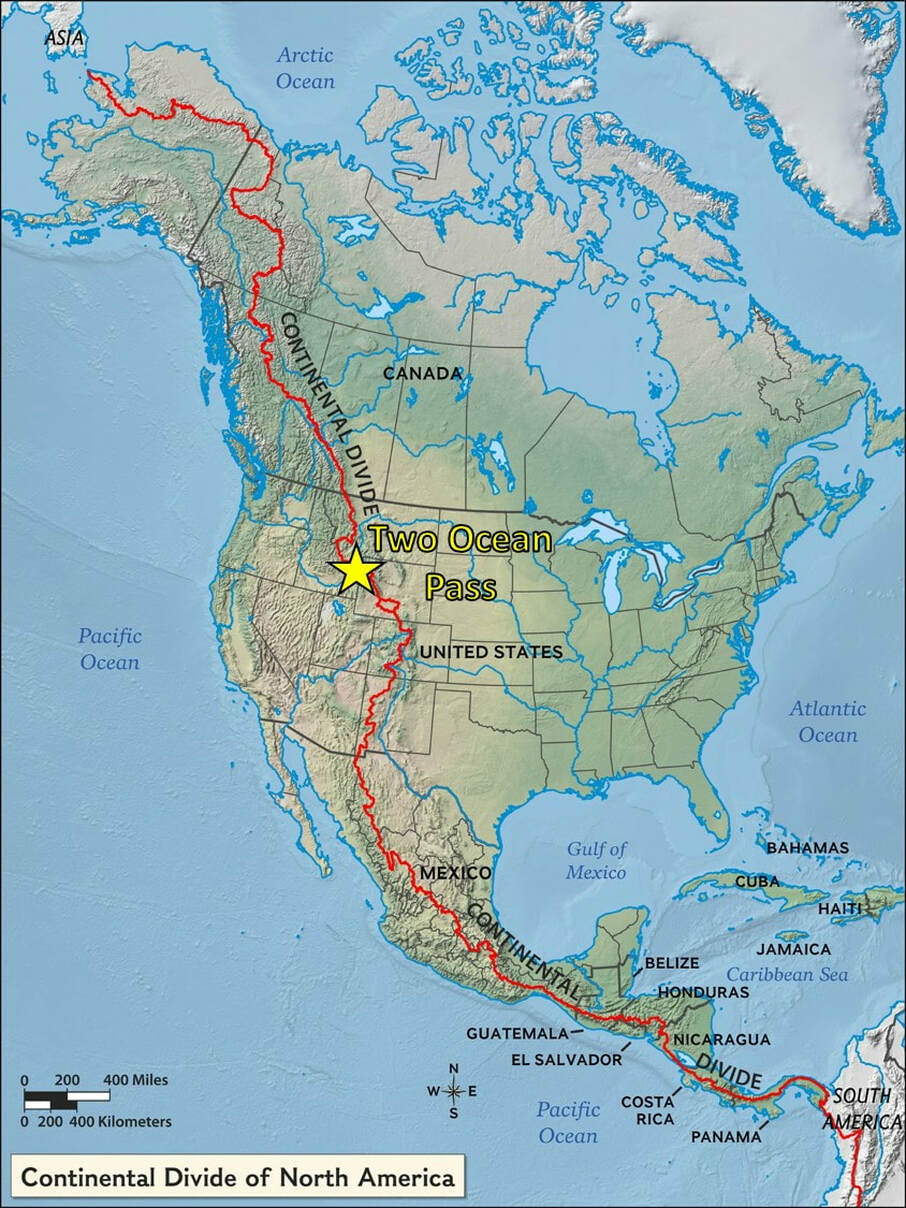 The North American Continental Divide extending from Alaska to South America.
Image: After https://www.nationalgeographic.org/encyclopedia/divide/.
The Continental Divide is an imaginary line that follows the North American Cordillera and separates the direction of water flow on the continent. Streams to the west flow to the Pacific Ocean. Streams to the east flow to the Atlantic or its subbasin the Gulf of Mexico. Early cartographers and geographers searched for a hypothetical sea route connection to Asia called the “Northwest Passage.” Columbus had shown the earth was not flat but found a landmass between Europe and Asia. He thought he discovered a western route to India and called the native population Indians. A continental  “Northwest Passage” of rivers was sought for over 500 years between the 15thand 20thcenturies. In 1827, mountain man Jim Bridger reported a stream whose waters parted on the continental divide to flow to the separate oceans of North America. He had found the long-sought water connection across North America. The geography of hope was finally replaced by the topography of reality. The Teton National Forest Supervisor, H. H. “Rip” Van Winkle, described the site:

“Two Ocean Creek is approximately three miles long, flowing southward along the Pacific side of the Continental Divide. In lowest water stages the Creek is four or five feet wide and about six inches deep where it divides into two approximately equal streams. Atlantic and Pacific Creeks. The division takes place in the timber, rather than in the open park, about a hundred yards above a marshy type of meadowland, through which both streams meander some distance before breaking away from the divide.
High water stages do not overflow the banks above the marsh; and the streams never have gone dry; thus it is not apparent that the “Y” or diversion point has been moved by floods or erosion. From all appearances, and considering the size and age of the trees on the banks, the “Y’ has remained where it is for several hundred years. The Old Trail across the Continental Divide, from Jackson Hole to Bridger Lake, which approximately follows Pacific and Atlantic Creeks, crosses both creeks about fifty feet below the split or division of the main stream. Fish can cross the Continental Divide in the two creeks.(Alter, J.C., 1962, Jim Bridger; University of Oklahoma Press, p. 78.)

Two Ocean Pass was the migration route by which Snake River (Pacific drainage) Cutthroat trout entered Yellowstone River and Lake (Atlantic drainage) about 10,000 years ago after the Pinedale glaciation. Even a difficult path, given enough time, will be used as a means of species dispersal (https://www.nps.gov/subjects/nnlandmarks/site.htm?Site=TWOC-WY).  If Lake trout took this same route in the 1990's, it would explain how they ended up in Yellowstone Lake and caused the ecological disaster the government is now trying to mitigate (Todd Koel) http://montanauntamed.com/fishing/article_8ee05a22-8d33-5585-abe8-836454818294.html 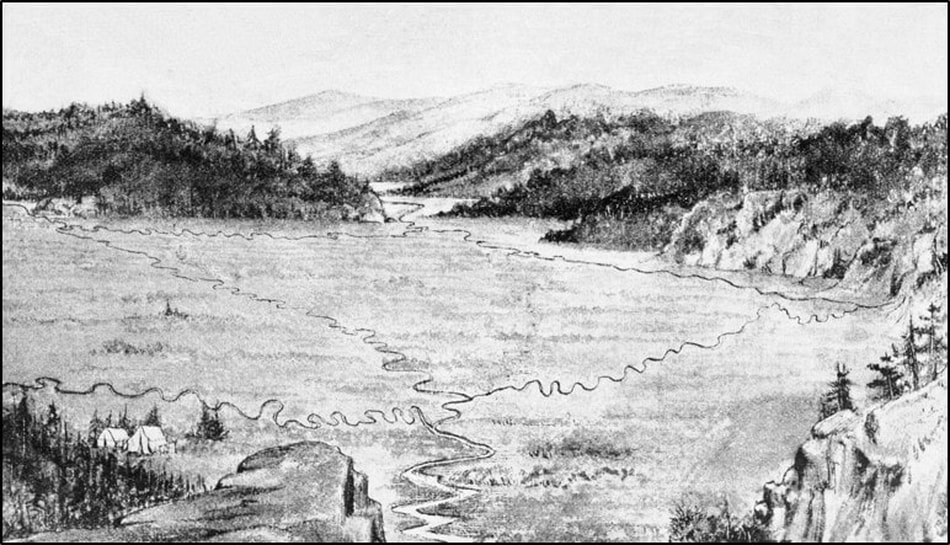 A drawing made in 1894 of Two Ocean Pass with a view to the northeast. Atlantic Creek exits the pass between the hills in the upper part of the image. Pacific Creek exits to the southwest in the lower part of the image. North Two Oceans Creek enters from the left side of the image and divides into its two distributaries and South Two Ocean Creek enters from the right of the image and is also shown dividing into two streams. Evermann Creek also enters the area from the west (just above the tents).
Image: https://commons.wikimedia.org/wiki/File:PSM_V47_D187_Two_ocean_pass_looking_east.jpg 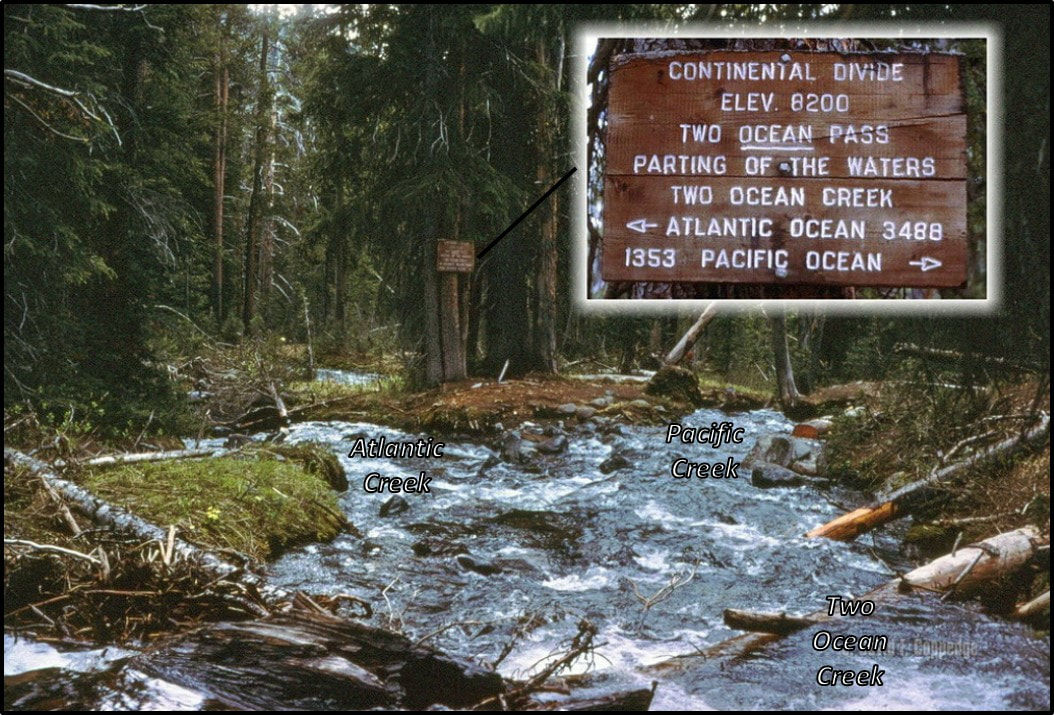 Two Ocean Pass was listed as a National Natural Landmark Site in 1965 and is located within the Teton Wilderness (established in 1964). The Teton Wilderness is bounded on the north by Yellowstone National Park (1872), to the west by Teton National Park (1929), and the Washakie  Wilderness to the east (1964).  The water flows on Middle to Upper Eocene Thorofare Creek Group, Absaroka Volcanic Supergroup (see https://www.geowyo.com/absaroka-volcanic-province.html; https://www.geowyo.com/dead-indian-hill.html; and Sunlight Basin site link). 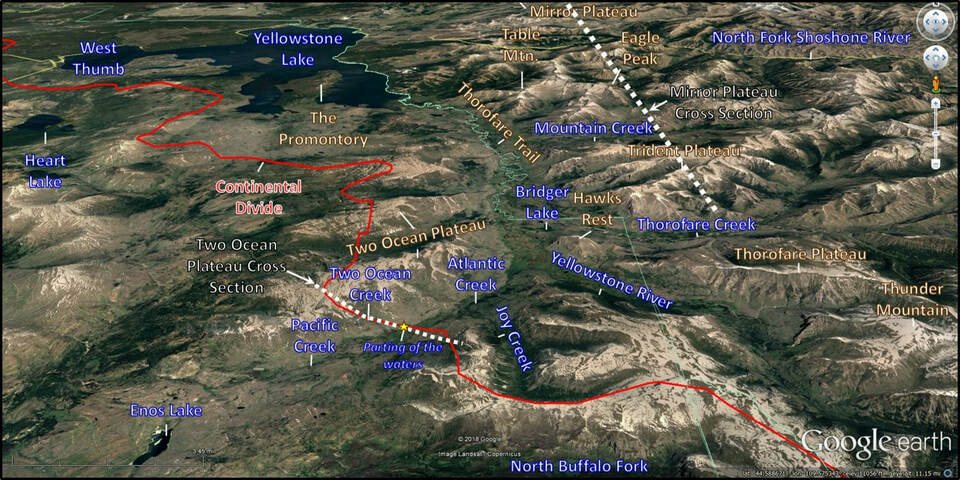 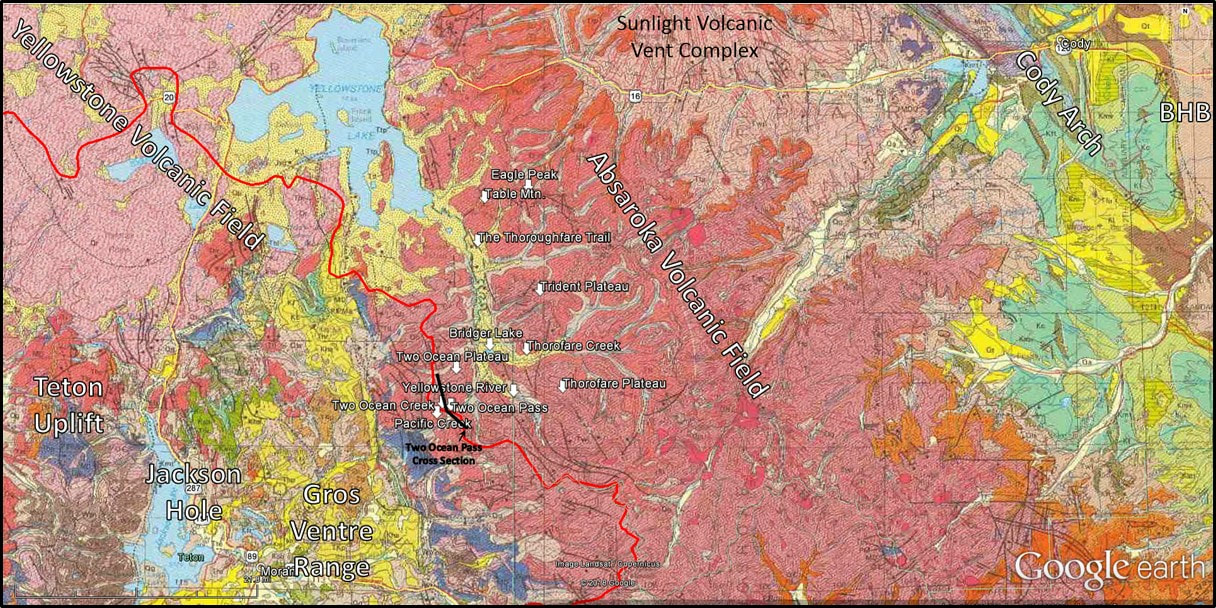 Geologic map of Two Ocean Pass Area, north view. In this view, the hydrologic feature lies entirely within the Eocene Absaroka Volcanic field, shown by the dark pinkish red color.  The prominent Sunlight volcanic complex lies to the northeast overlying the Willwood Formation shown by the light tan color. The Quaternary Yellowstone volcanic field is shown in light pink to the northwest. The Precambrian, Paleozoic, and Mesozoic rocks to the west and southwest are of the Teton Uplift, Jackson Hole and Gros Ventre Range. Quaternary sedimentary rocks are shown in yellow. Pacific Creek joins the Snake River about 1-mile northwest of Moran. Atlantic Creek joins the Yellowstone River about 1-mile southwest of Hawks Rest.
Image: After Love, J.D., and Christiansen, A.C., 1985, Geologic map of Wyoming: U.S. Geological Survey , scale 1:500,000;  https://ngmdb.usgs.gov/ngm-bin/pdp/zui_viewer.pl?id=7344

Two Ocean Pass lies in a remote area of the Teton Wilderness south of Yellowstone Park in grizzly bear country. It requires a round trip hike or horseback ride of about 40 miles along the Atlantic Pacific trail north of Moran. This is an old Indian trail that was used by mountain men and fur trappers. It is a journey into western history and breath-taking wilderness solitude, to a very rare geologic feature. 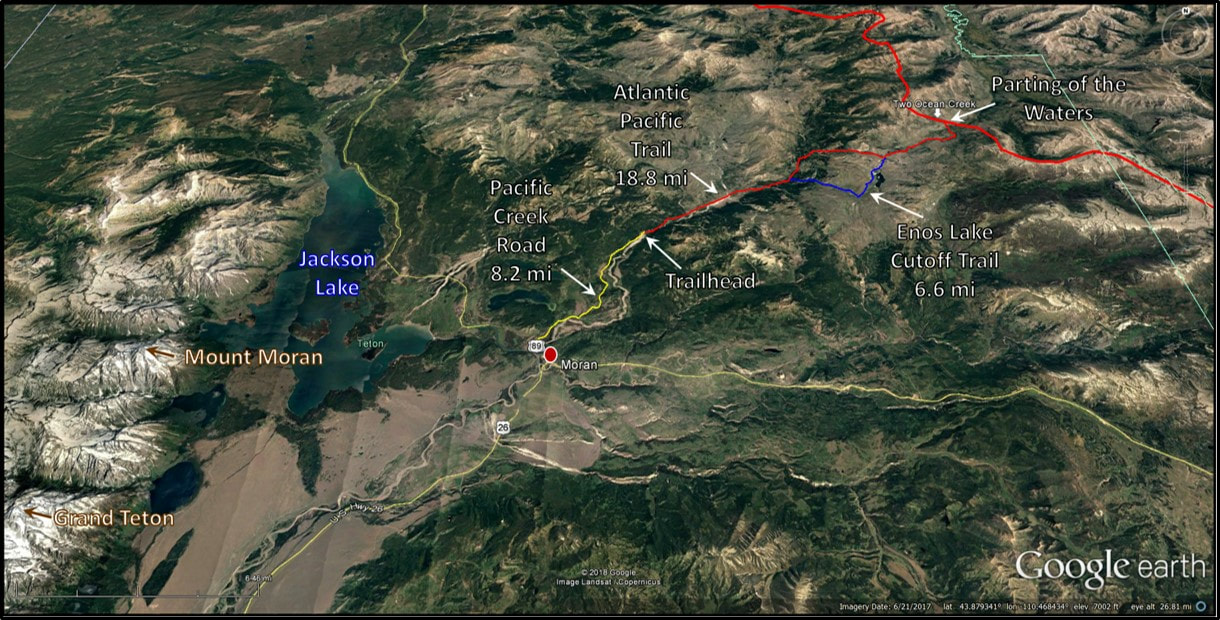 Elevation profiles of trails to Two Ocean Pass and Parting of the Waters.
Image: Google Earth