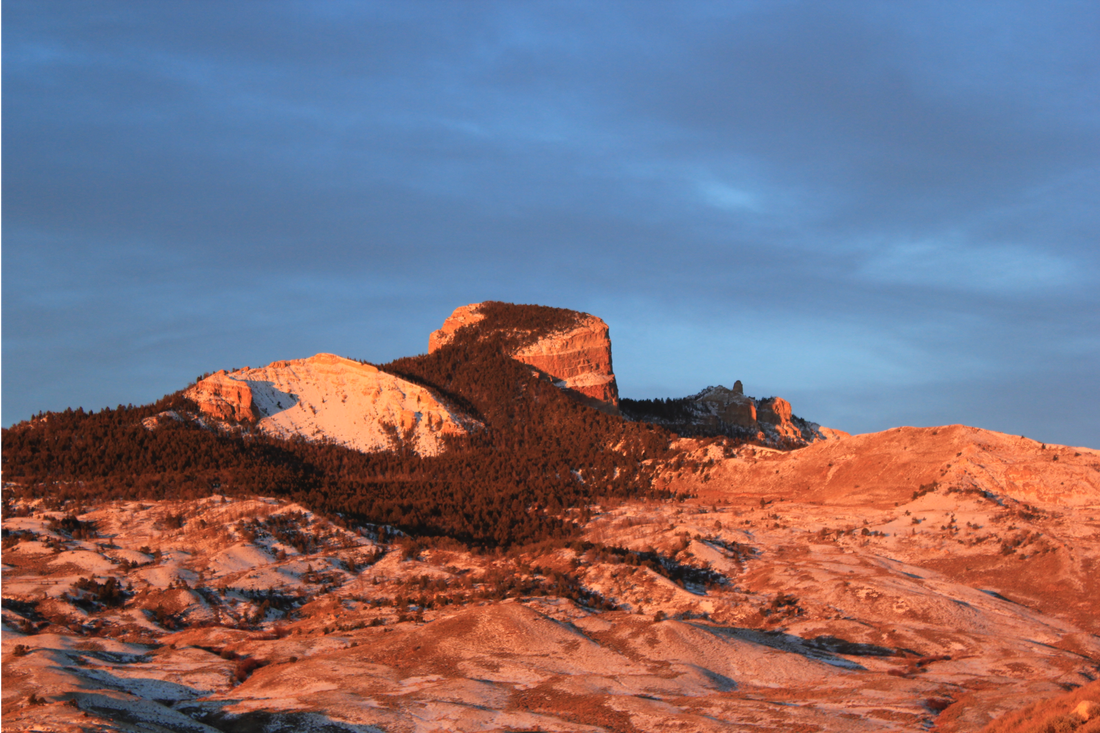 ​Largest terrestrial landslide in the world, memorable summit hike with spectacular views of the Bighorn Basin.  This feels like Wyoming with antelope, changing weather, views, geology and solitude.  This trip can be combined with a visit to the Heart Mountain Relocation National Historic Landmark, a World War II Japanese-American internment camp.​​

Heart Mountain is a prominent landmark 10 miles north of Cody. It also happens to be part of the world’s largest terrestrial landslide that geologists call the Heart Mountain Detachment (HMD). It occurred about 49 million years ago. 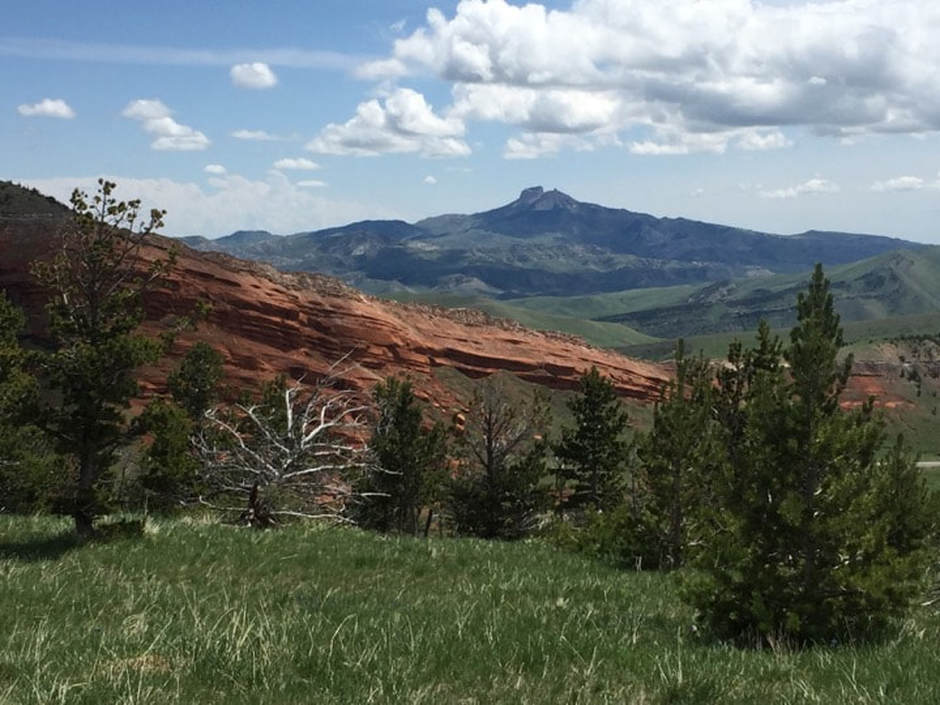 Heart Mountain, view from Chief Joseph Highway (WY 296) looking east. Red Triassic Chugwater capped by Jurassic Gypsum Spring in foreground.
Photo by Mark Fisher
The white carbonate rocks on the top are blocks of Paleozoic Madison and Bighorn formations.  They were originally deposited in a shallow sea about 350 and 450 million years ago, respectfully, about 30 miles away near the northeastern corner of Yellowstone National Park. Before movement, the Heart Mountain block covered an area of about 450 square miles and almost 5,000 feet thick, weighing trillions of tons. It detached and moved catastrophically down a 2 degree slope and over Dead Indian Hill breaking apart as it slid. Heart Mountain is today located along the structural axis of the Bighorn Basin. Other remnants of the HMD are found dispersed in an area over 1,300 square miles (see figure below). With the maximum velocity of the slide estimated to be from one-third to just under the speed of sound (767 mph), the entire process could have been completed in minutes to a few hours. 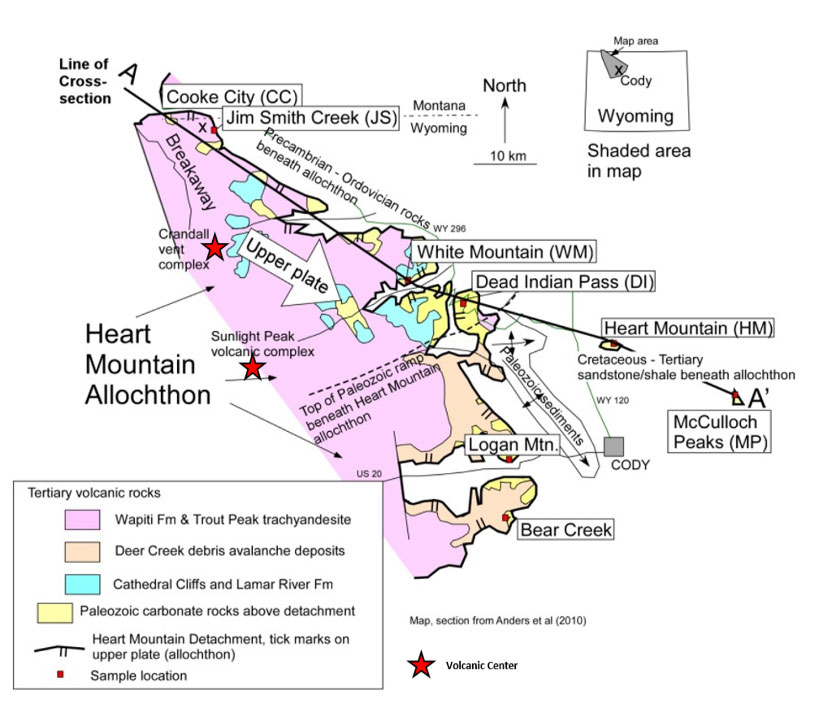 Heart Mountain Detachment lies atop Paleozoic carbonate rocks northwest of Dead Indian Pass, where it cuts across them. Southeast of Dead Indian, the detachment places Paleozoic carbonate rocks atop younger Mesozoic and Tertiary shales and sandstones of the Bighorn Basin. Carbonate rocks at McCulloch Peaks (MP on section) must have traveled at least 26 miles (42 km) in the direction of this section. Image from: After Losh, S. https://faculty.mnsu.edu/stevenlosh/wp-content/uploads/sites/21/2015/11/HeartMtnfig1.jpg
At the time of the detachment, Wyoming was in the last stages of the Laramide mountain building episode and at the start of Eocene volcanic activity. The Heart Mountain Detachment has been interpreted as a large scale collapse feature from the flank of an active volcanic center. Two ancient extinct volcanoes in the area have been suggested as candidates for triggering the HMD: the Crandall (50.1-49.2 Ma) and/or the Sunlight (49.6-48.1 Ma) vent complexes. 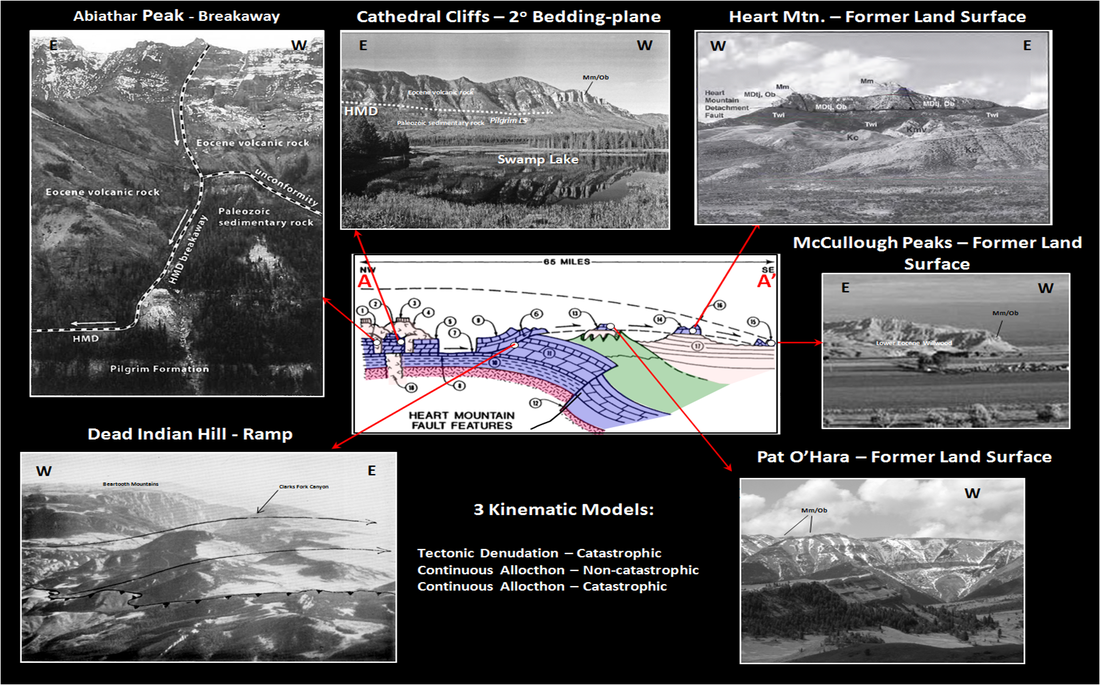 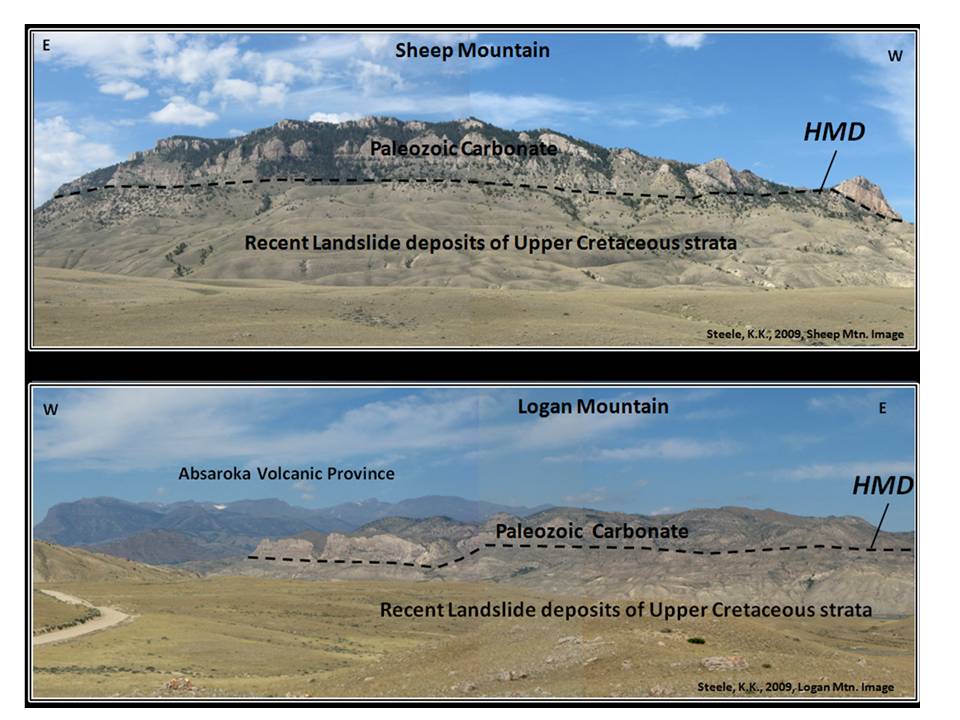 Sheep (top) and Logan (bottom) Mountains topped by Heart Mountain Detachment blocks. Motion was from north (Logan Mtn.) to south (Sheep Mtn.).
​Images by Ken Steele
Here is a link to a 1-1/2 minute video on Heart Mountain from the Exploring The Nature of Wyoming series by the University of Wyoming, 2009

In the autumn of 1944 a U.S. Army medic crawled through intense enemy fire to rescue wounded soldiers in action near Biffontaine, France. The following spring another American soldier destroyed three separate gun emplacements after rescuing wounded comrades in a battle near Tendola, Italy. The first survived but the latter was killed in action. Both men where members of the 442nd Regimental Combat Team, a segregated outfit of Japanese Americans. Both were awarded the Medal of Honor for their heroic actions in combat. Both soldiers’ families were interred behind barbed wire and guarded by armed U.S. Army soldiers at the Heart Mountain Relocation Camp in Wyoming. 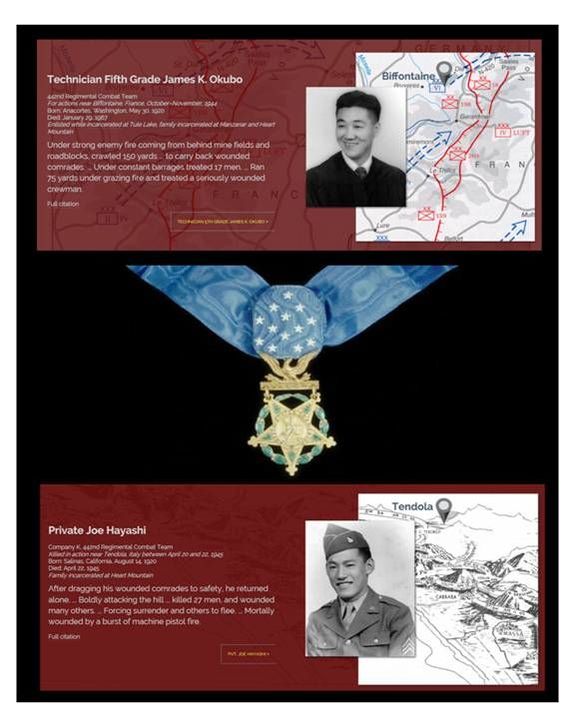 Medal of Honor recipients whose families were detained at the Heart Mountain Camp.
Images: http://cgm.smithsonianapa.org/honors/medal-of-honor.html 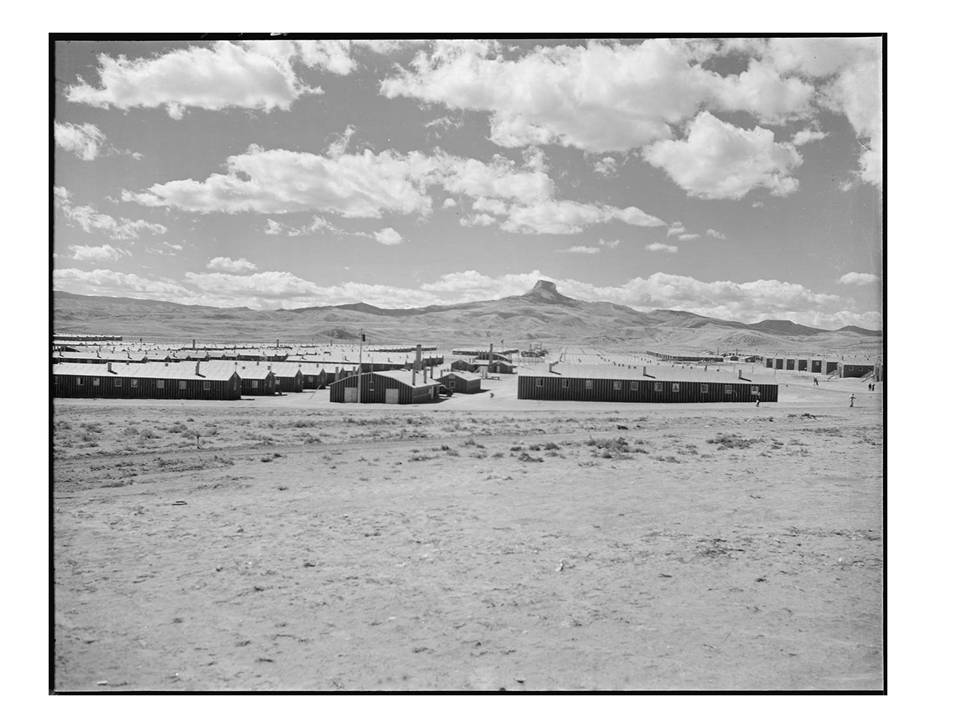 Heart Mountain Relocation Camp, Wyoming (May 1942 – November 1945).
Image: Parker, T., 1942, Heart Mountain Relocation Center, Heart Mountain, Wyoming, War Relocation Authority https://upload.wikimedia.org/wikipedia/commons/1/10/Heart_Mountain_Relocation_Center%2C_Heart_Mountain%2C_Wyoming._Looking_west_over_the_Heart_Mountain_Rel_._._._-_NARA_-_538782.jpg​
​The attack on Pearl Harbor by Japan raised suspicion and triggered racism towards Japanese Americans. Two months later President Roosevelt signed Executive Order 9066. This document and the enabling legislation required all individuals of Japanese extraction to be removed from an exclusion area on the west coast of the United States to relocation camps located in the interior of the country.
​
The Heart Mountain Camp was one of the ten detention centers established in six western states. Heart Mountain is located between Cody and Powell, Wyoming on land originally designated for the Heart Mountain Irrigation Project. The camp detained some 10,000 men, women and children over its three-year existence. Over 900 detainees served in the U.S. Army during the war.  Fifteen soldiers from the Heart Mountain Camp were killed in action, and over 60 suffered battle wounds.

What you will see at Heart Mountain Summit Hike 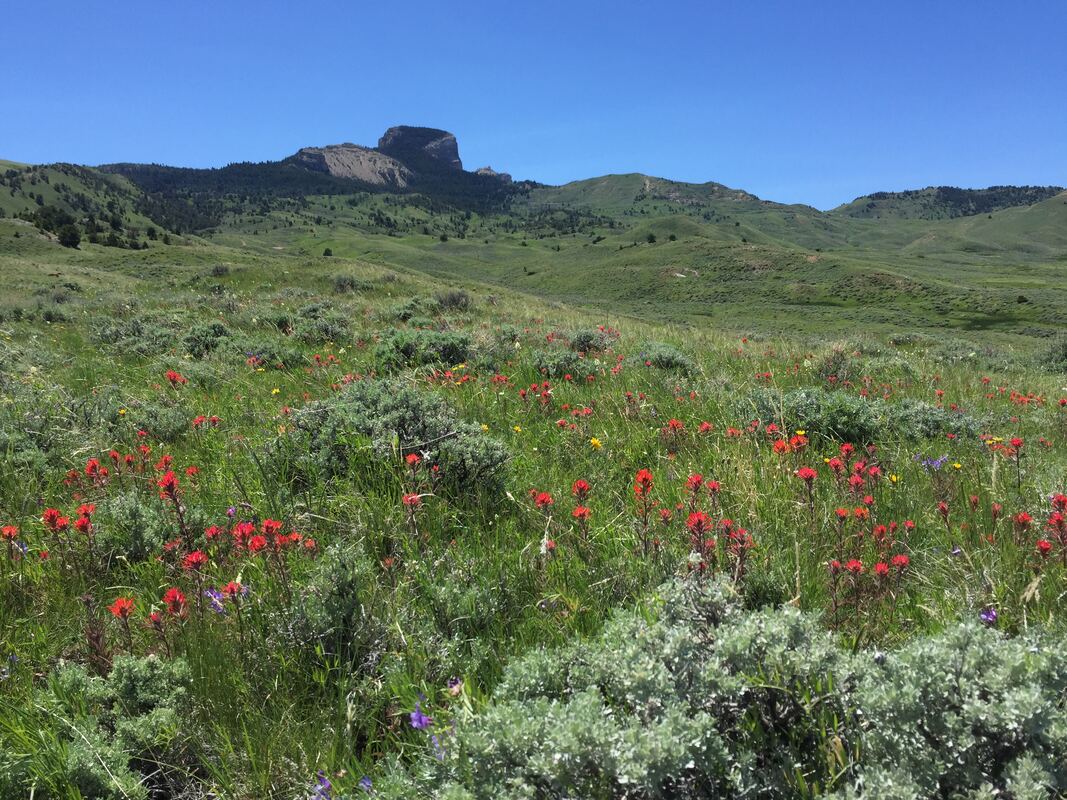 Heart Mountain and Indian Paintbrush
​Photo By Mark Fisher
One of our favorite hikes in the entire Bighorn Basin is to the summit of Heart Mountain and we highly recommend it (see trail map below). It is a strenuous hike with an elevation gain of 2,400 feet and a total round trip of seven miles. You should plan for 2-1/2 hours to 3 hours to reach the summit at 8,123 feet, ½ to 1 hour to sit and enjoy the view and eat the lunch you have packed, and 2 hours to descend for a total of about 5 to 6 hours. Included is time to read all the great history and nature signs that the Nature Conservancy has installed along the trail. The drive is 45 minutes each way from Cody, so this adventure will take most of the day. The lower portion of the hike up the Valley Trail is on sedimentary rock of the Willwood Formation (55 million years) which is below the slide surface. It is composed of fine grained rocks like shale, mudstone, siltstone and some sandstone deposited by streams. Because these are soft rocks, most of it easily erodes and becomes covered slope. The steep upper portion of the hike up the Mountain Trail is on the carbonate slide block composed of Ordovician Bighorn and Mississippian Madison Formations (450 to 350 million years). The carbonates include both limestones and dolomites that are resistant to erosion and form the cliffs and steep slopes. There is a large area of lush vegetation just below the slide surface on the east side of the mountain near the kiosk. Our interpretation is the precipitation moves easily down through fractures in the overlying carbonates until it hits the impermeable shales of the Willwood at the slide contact. The water then moves laterally at the base of the carbonates along the slide contact until emerging at the surface. This concentrated outflow results in what we would consider lush vegetation for Wyoming. 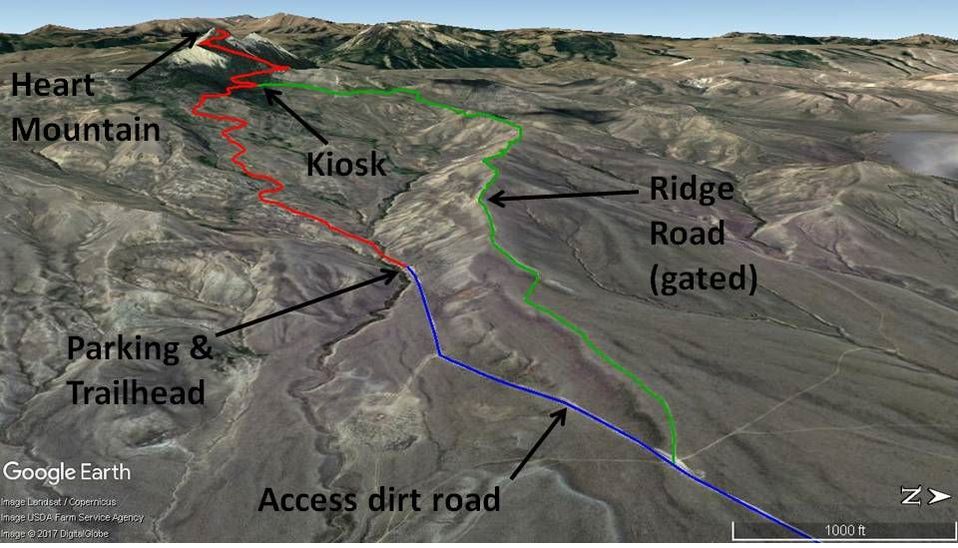 Map of Heart Mountain hike, view is to the west.
​Image by Google Earth 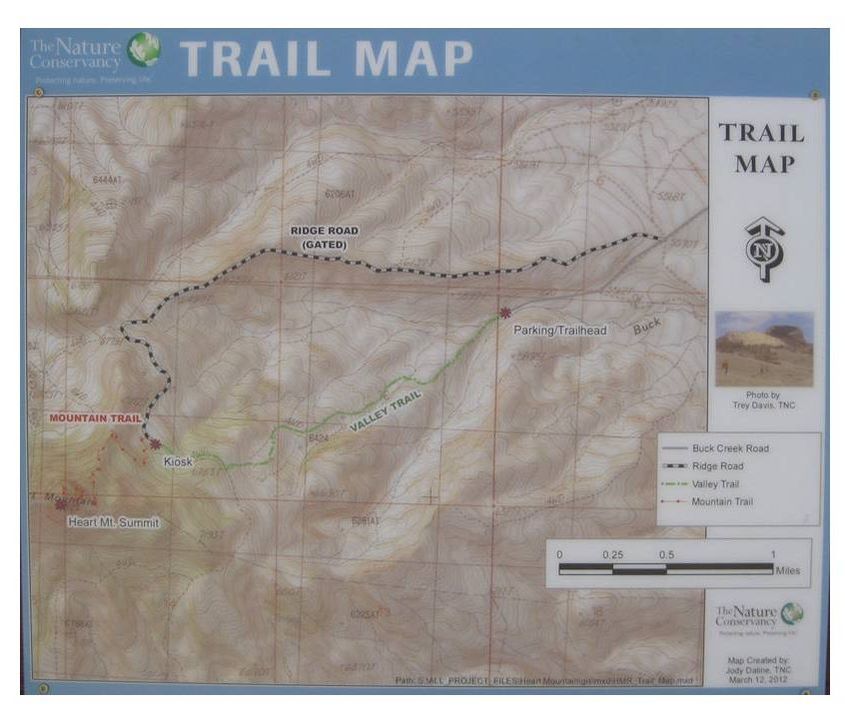 Starting at the intersection of US 14, 16, 20 (Sheridan Ave) and US 14A (16th St) in downtown Cody, head northeast toward Powell on US 14A for 13.0 miles. Turn left on R19, which is also the turnoff for the Heart Mountain Relocation Interpretive Center and National Historic Landmark. During World War II, 14,000 Japanese-Americans were moved from their homes on the west coast to this internment camp making it the third largest population center in Wyoming. It is an interesting place if you have some time.  Road 19 curves to the right at 13.6 miles, curves to the left at 14.6 miles and changes name to Lane 13-1/2, pavement ends at 17.7 miles, intersection with R22 at 17.9 miles (Heart Mountain Nature Conservancy HQ) go straight over cattle guard, at 18.4 cross irrigation canal and sign-in on Nature Conservancy register and go through gate, at 21.1 miles you have arrived at the parking lot for the trail. There are toilets at the trailhead. No dogs allowed. Road is fine for passenger vehicles, but maybe leave your Corvette at home. Check the Nature Conservancy Heart Mountain website for trail closure dates which often occur in the Spring and Fall.
​
If you bring mountain bikes, you are allowed to ride/push them halfway up the mountain to the kiosk.  You can stash them in the trees, summit the mountain by foot, return to the kiosk and ride the bikes down a fun two-track called the Ridge Road to the parking lot. Enjoy! 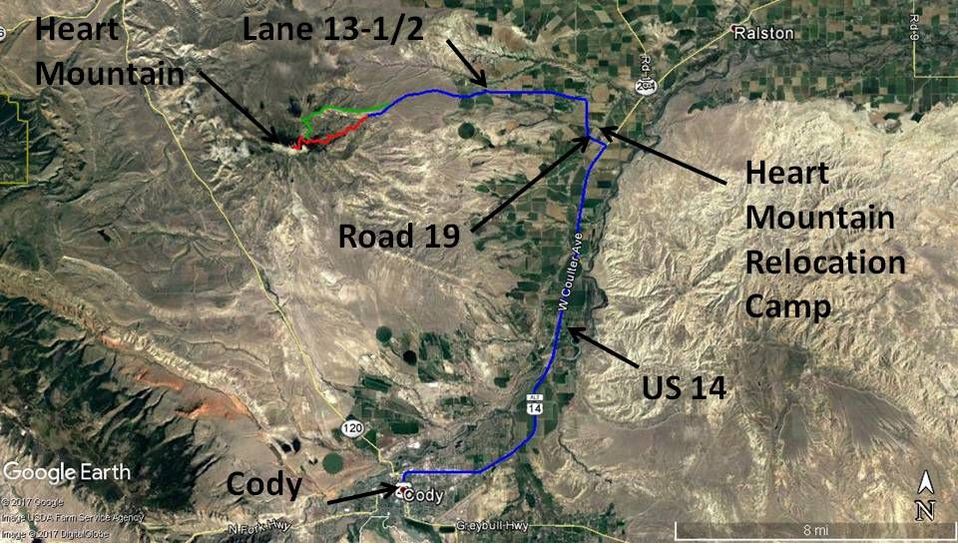 Map to Heart Mountain. Access roads in blue and Nature Conservancy trail to summit of Heart Mountain in red.
Image by Google Earth 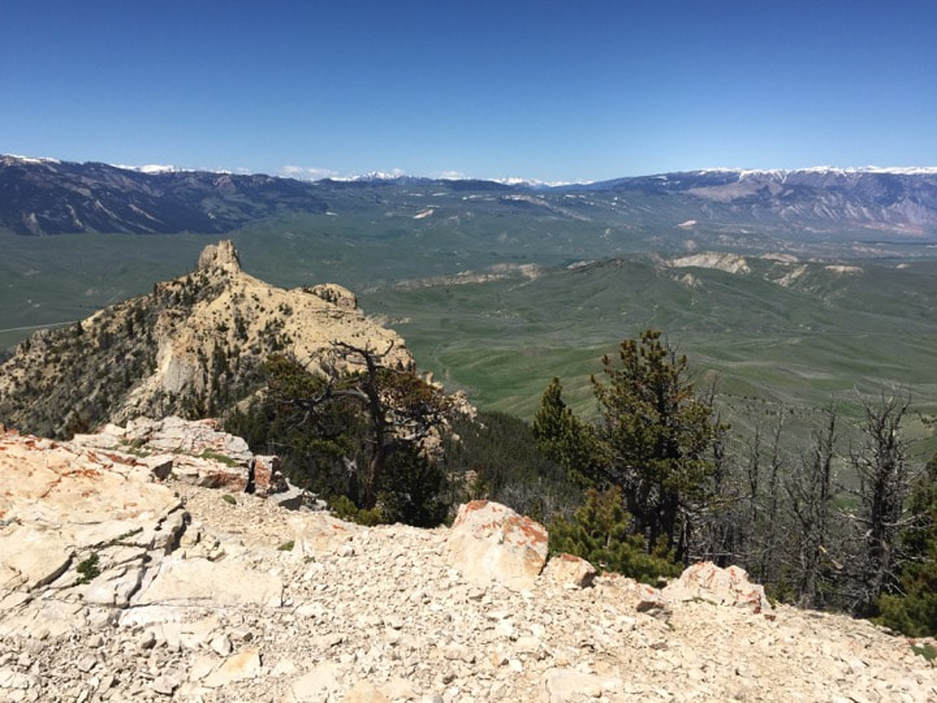