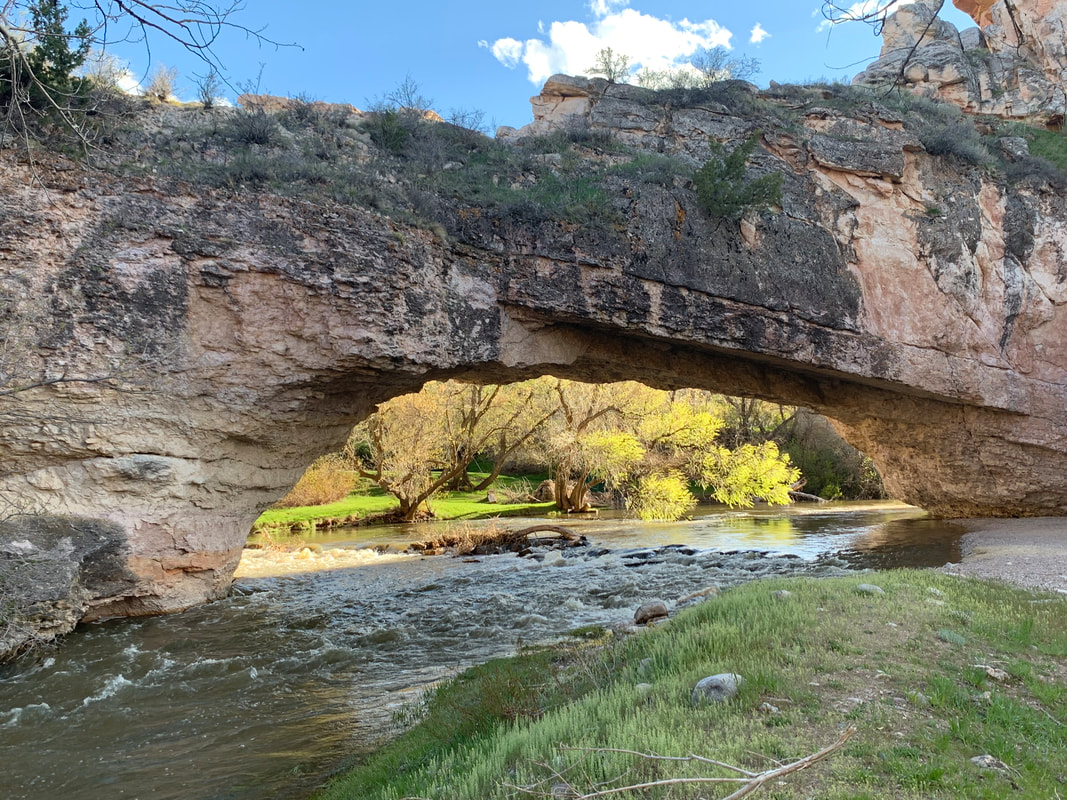 Just a gorgeous and peaceful place with a natural rock bridge spanning La Prele Creek, and lush green grass contrasting against the surrounding red rock cliffs.  Certainly worth a stop if you are traveling on the interstate between Casper and Douglas. Area includes several cultural sites of historic and geologic significance near the Emigrant Trails. The Grasslands of the Powder River Basin were a frequent stage for the Indian wars of the American West. 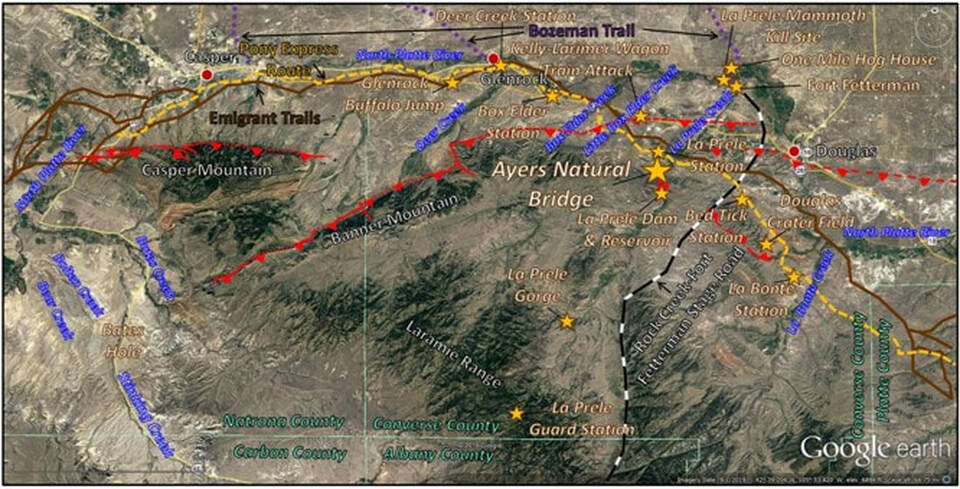 Indians apparently avoided the site due to the “evil spirits” that lived beneath the bridge. This belief arose from a death of a brave from a lightning strike in the area. This gave Euro-Americans a place of refuge during Indian attacks. Early settlers built cabins here and mountain men reportedly lived in nearby caves. Native Americans, however, maintained a long occupation of the basin. The Glenrock buffalo jump shows pre-horse Indians did hunt and butcher just north of the area from A.D. 400 to A.D. 1750.  A Paleo-Indian mammoth kill site and camp is located on La Prele Creek northwest of Fort Fetterman dated from at 13,000 years ago.

Left: Glenrock buffalo jump is forty-foot north facing escarpment used to kill bison. Geologic abbreviations: Kmvt – Teapot member, Cretaceous Mesaverde Formation; Kmvpb – Powder Butte member, Cretaceous Mesaverde Formation; Kmvp – Parkman member, Cretaceous Mesaverde Formation. Right: La Prele mammoth kill site and camp located at the gold star. View to the east. Image: Left: https://wyoshpo.wyo.gov/index.php/programs/national-register/wyoming-listings/view-full-list/521-glenrock-buffalo-jump; Right: https://phys.org/news/2015-10-human-role-extinction-mammoths-mammals.html.
The route along the North Platte pioneered by trappers in the 1820s and 1830s developed into the Emigrant Trails. The California trail was in use by 1834. The Oregon trail became popular after 1843. The Mormon trail was used from 1846 to 1868. The Bozeman trail connected these earlier routes to the Montana gold fields through cutoffs between present-day Casper and Douglas. The trailed was active from 1863 to 1868 across the grassland of the western Powder River basin.

This was the traditional Crow Indian hunting grounds, formally recognized by the 1851 Fort Laramie Treaty. The Lakota Sioux and their allies aggressively forced the Crow into Montana by 1860. The Sioux and their allies (Cheyenne and Arapahoe) did not approve of the presence of the Bozeman Trail and became increasingly belligerent over the perceived trespass by the emigrants, miners and army. Indians attacked the Kelly-Larimer wagon train in July 1864 along Little Box Elder Creek. Four men were killed, two women and two children were taken prisoner, and the wagons were looted of supplies and horses. One of the women was killed, trying to escape. All five of the deceased are buried two miles west of Natural Bridge Road.

Deer Creek Station was the site of Joseph Bissonette’s trading post at the confluence of Deer Creek and the North Platte River. It also served as a mail and stage stop along the Emigrant trail. With Indian hostilities on the rise, the army established a post adjacent to the station to protect the telegraph and travelers on the trails in 1862. The Kelly-Larimer attack led to Bissonette abandoning the trading post in the Fall of 1864. Two battles took place near Deer Creek Station in 1865. The Indians burned down the empty station in 1866. 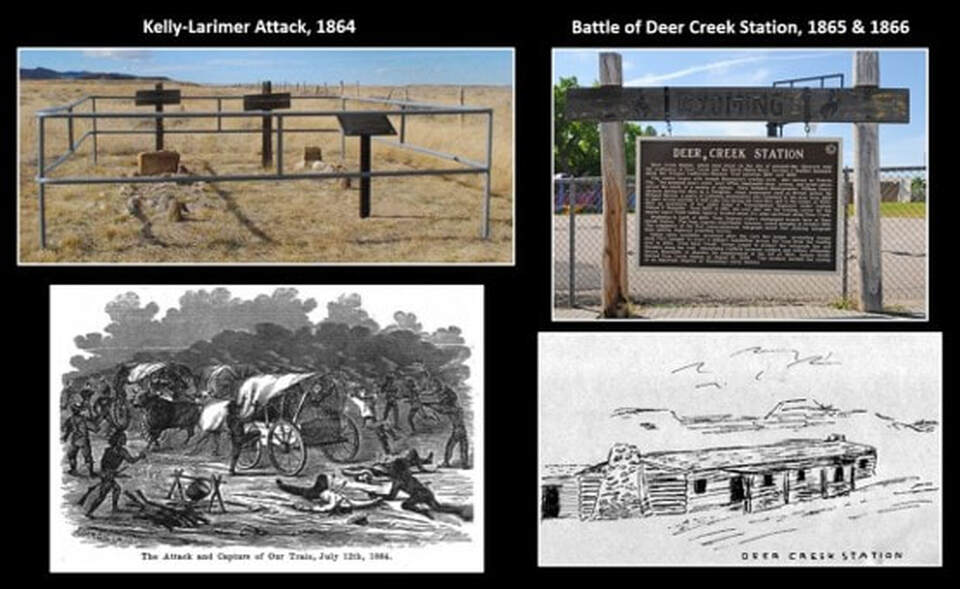 Left: Kelly-Larimer Wagon Attack gravesite and artist’s interpretation. Right: Deer Creek Station marker and artist’s reconstruction.
Image: Left Top: After Brown, R., Photo in https://www.wyohistory.org/encyclopedia/attack-kelly-larimer-wagon-train, Left Bottom: Kelly, F., 1891, My Captivity Among the Sioux Indians, Third Edition, Figure preceding Chapter 2; https://books.google.com/books?id=wn8TAAAAYAAJ&printsec=frontcover&source=gbs_ge_summary_r&cad=0#v=onepage&q&f=true. Right Top: After Mays, K., https://www.deseret.com/2019/4/10/20670507/picturing-history-deer-creek-and-glenrock-wyoming#interpretive-panel-identifying-the-site-of-rock-in-the-glen-near-present-day-glenrock-wyoming, Right Bottom: https://www.legendsofamerica.com/wp-content/uploads/2018/01/deercreekstation.jpg.
U.S. Army ordered a punitive expedition against the Sioux, Arapahoe, and Cheyenne living in the Black Hills in 1865 that became known as the Powder River War. In 1865, the Cheyenne attacked settlers, wagons, and solders throughout the Platte River drainage as revenge for the Massacre at Sand Creek, Colorado in late 1864. By spring of 1865, the Sioux and Cheyenne combined forces to attack all Euro-Americans (civilian or military) that trespass their territory. This was followed by Red Cloud’s War ignited in 1866 that ended with the second Fort Laramie Treaty of 1868. Fort Fetterman was built in 1867 on the south bluff of the North Platte River. The fort was an important staging area for the Indian wars in the Powder River Basin.
​
The One Mile Hog Ranch was built north of the river from the fort as an entertainment venue in 1880. It gained a reputation as the “rowdiest, roughest and most dangerous red-light establishment in Wyoming.” It moved across the river to Fetterman City after the Army abandoned the post in 1882. Sheriff Malcom Campbell closed the establishment in 1885. Alfred Packer, a notorious fugitive, was recognized at the One Mile by a fellow patron and soon captured by Sheriff Campbell at a nearby hideout. 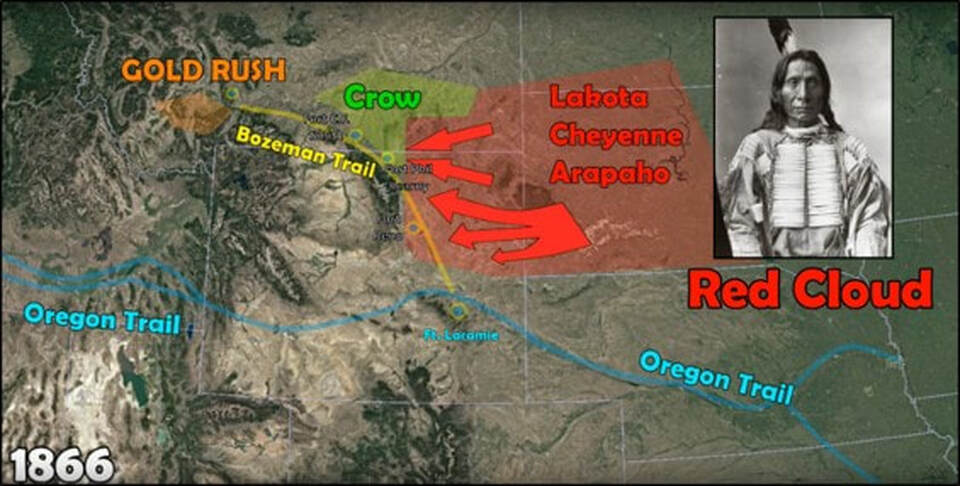 Red Cloud’s War, 1866-1868. Red Cloud was probably the most successful Native American leader in all conflicts of Indians with the U.S. Army.
Image: After 2W1C S03E10: Red Cloud's War; https://www.youtube.com/watch?v=CtdvsdlyAUI. 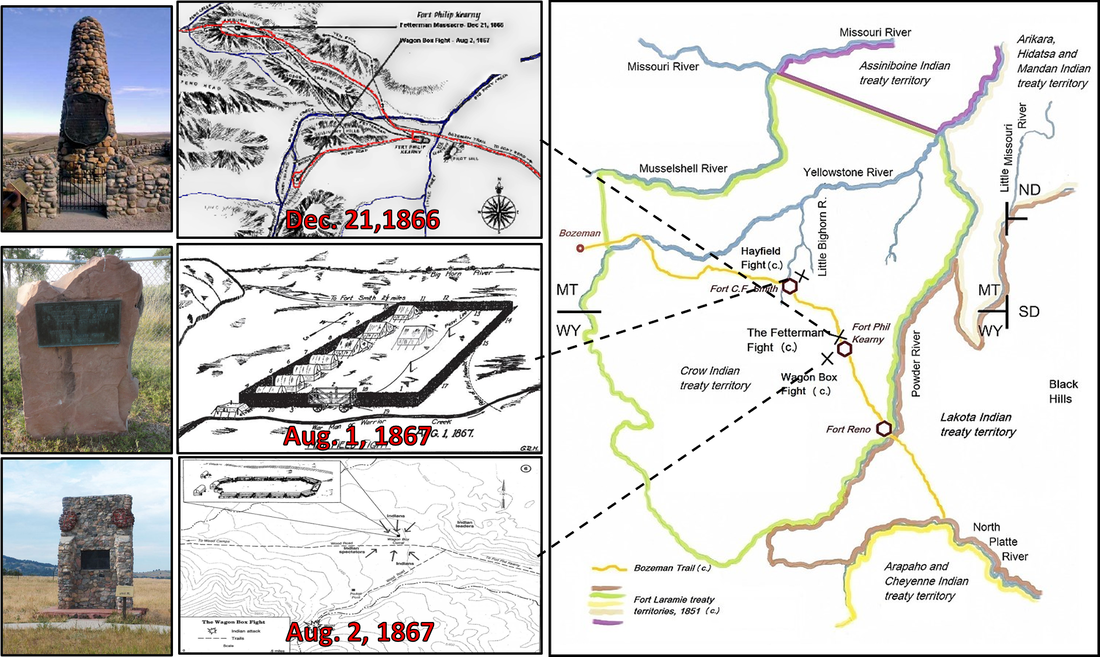 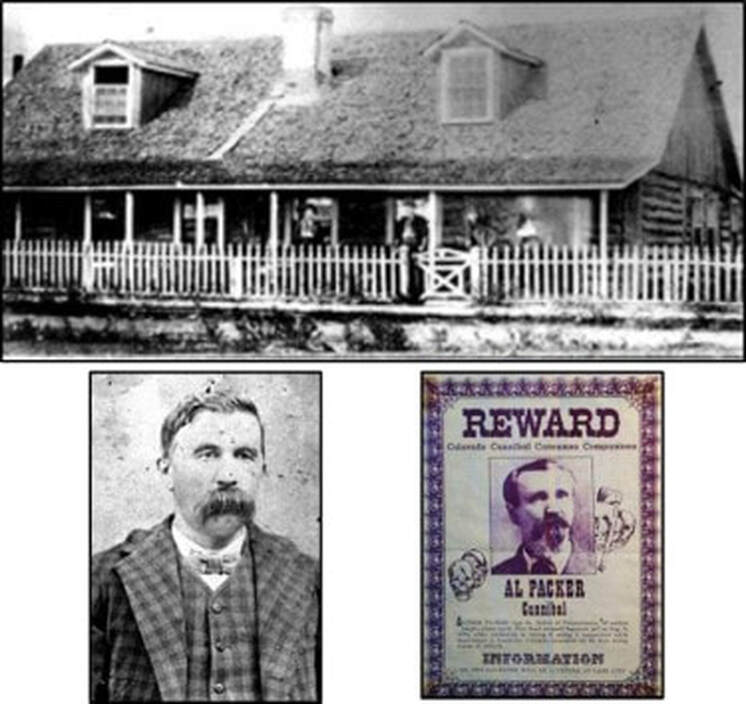 Top: One Mile Hog Ranch in former Fort Fetterman hospital. Bottom Left: Sheriff Malcolm “Old Grizzly” Campbell. Bottom Right: Alfred “Colorado Cannibal” Packer.
Image: Top & Bottom Left: Brown, L.K., 1995, The Hog Ranches of Wyoming: Liquor, Lust, & Lies Under Sagebrush Skies (Kindle Version), Loc. 592 & 670 of 838. Bottom Right: https://www.facebook.com/TodayInHorrorHistory/photos/a.1442157599438544/2019188805068751/?type=3&theater.
With the end of the Indian wars in the basin and the building of the transcontinental railroad through Wyoming the area was officially opened for settlement by Euro-Americans by the late 1870’s. Large cattle herds soon grazed on the open range grasslands of the basin by 1883 replacing the bison.

​Ayres Natural Bridge is a geologic feature at the southern margin of the Powder River Basin. The Casper Mountain–Laramie Range are major uplifts elevated on north-bounding thrust faults about 60 million years ago. East La Prele Anticline (ELA) is one of several northwest-trending folds developed on back thrusts of the north bounding fault. 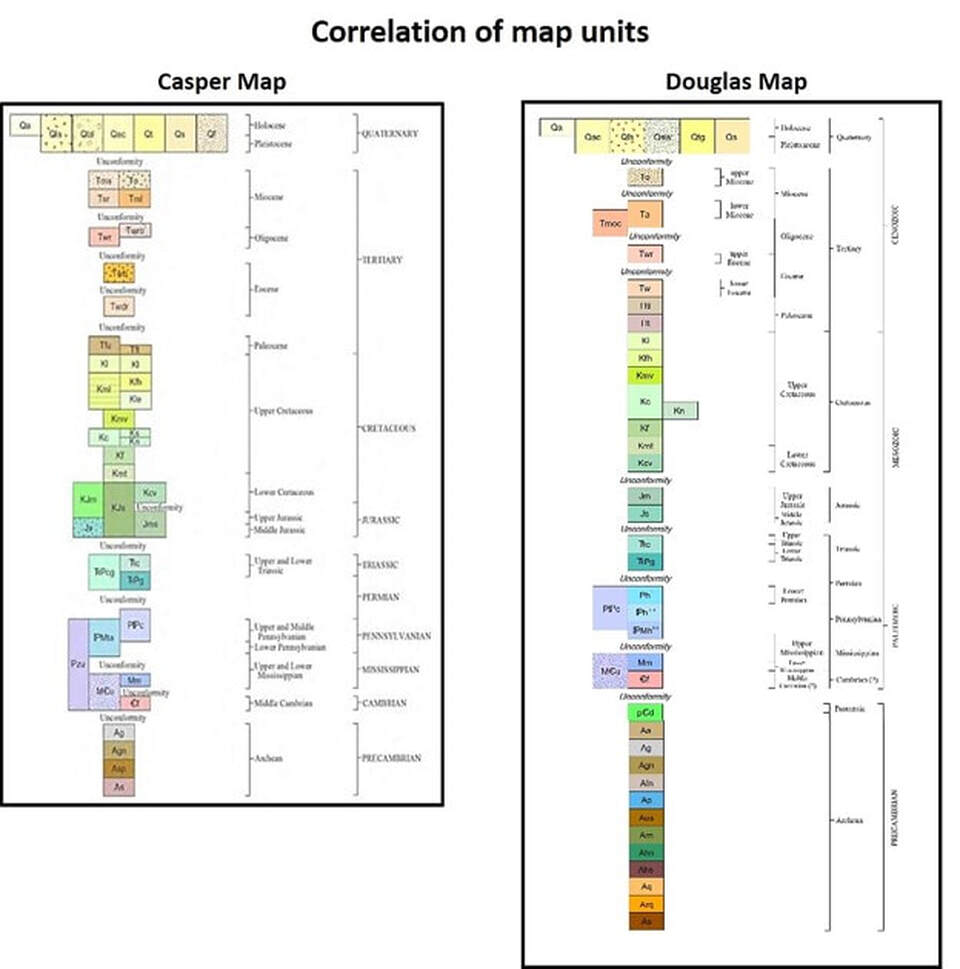 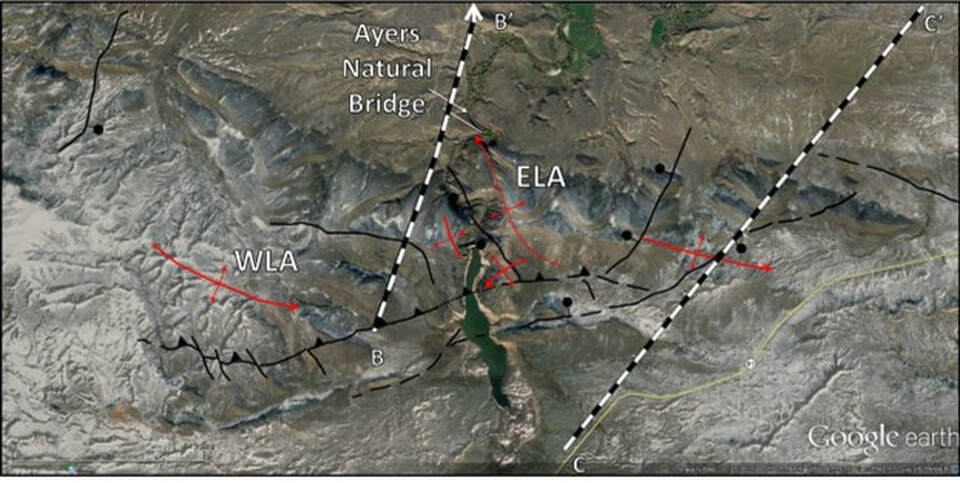 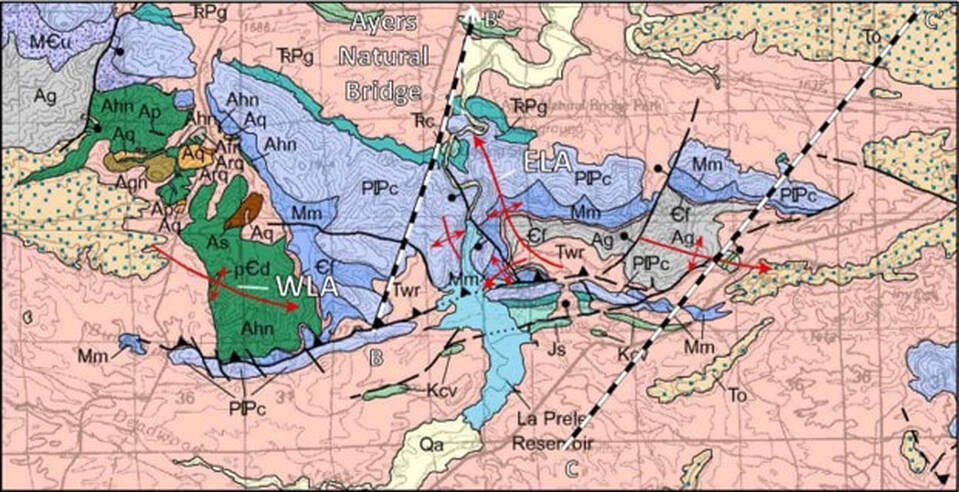 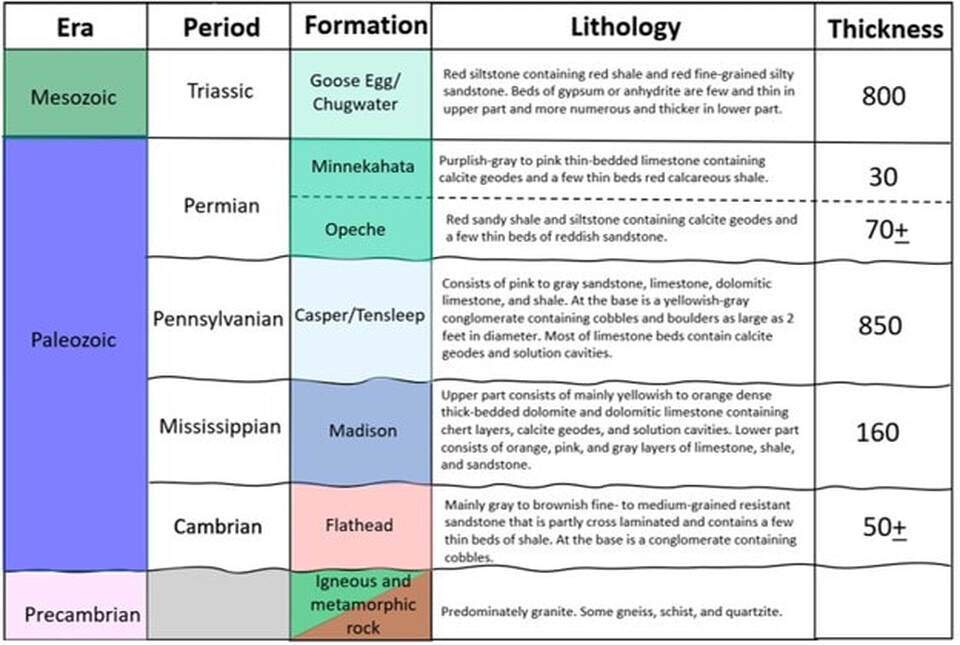 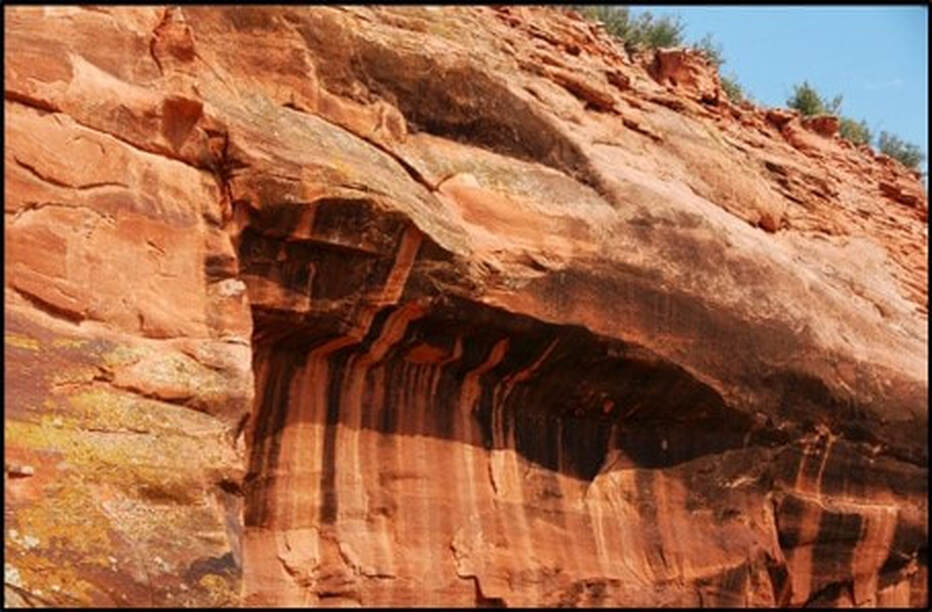 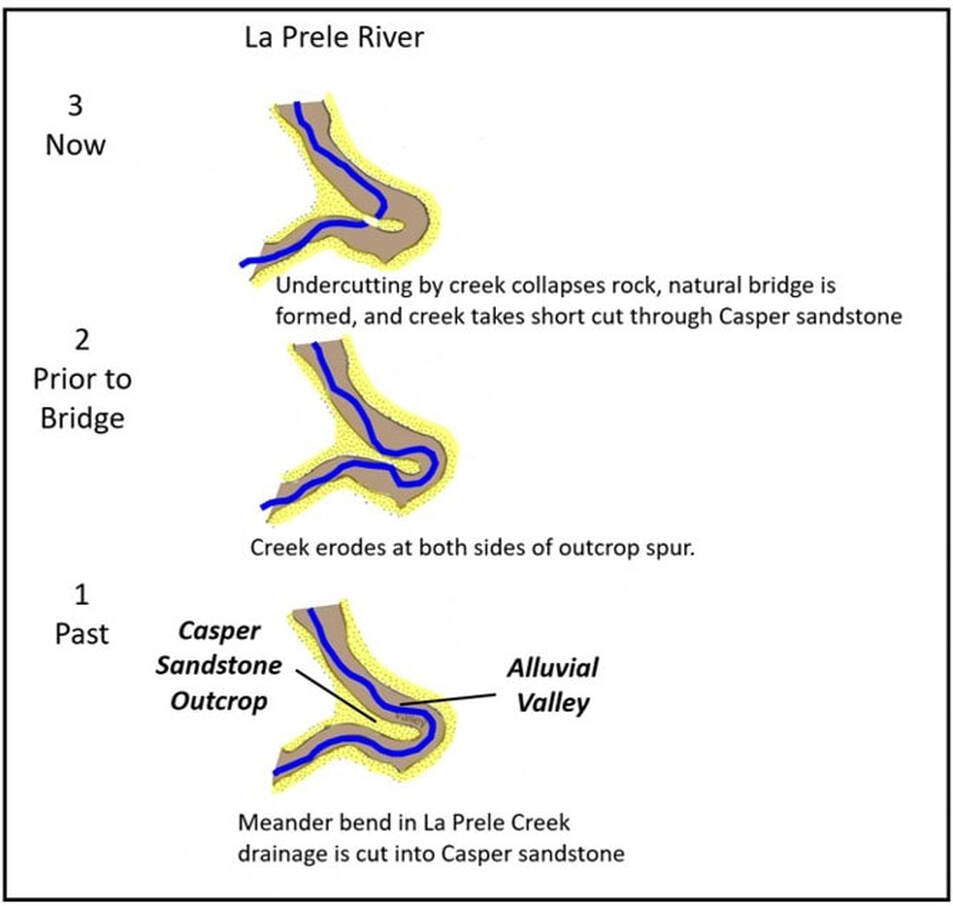 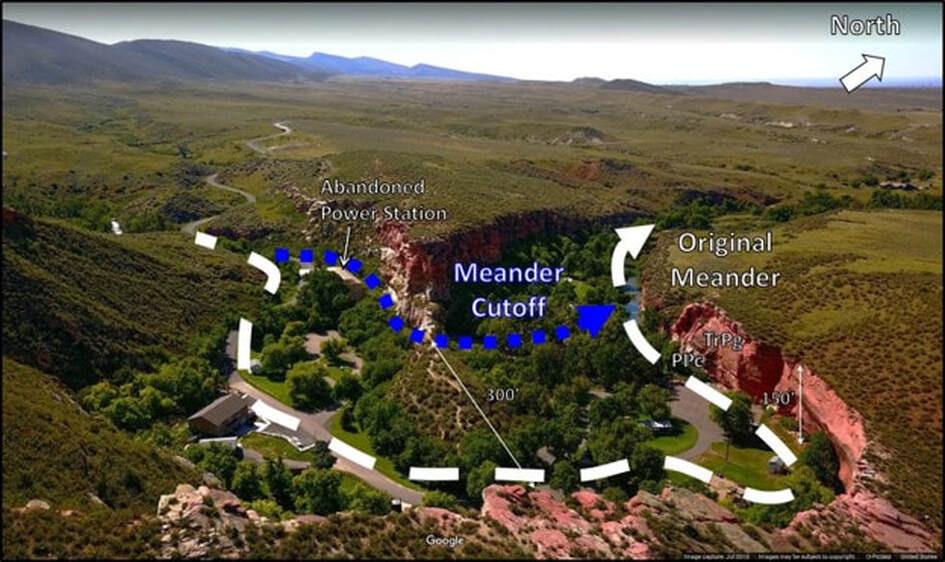 ​The red ocher and chert tools recovered at the Clovis-age (12,000-11,000 years before present) mammoth kill site and camp indicated long distance communication between hunter gather groups from South Pass and Hartville Uplift areas. Red ocher is the name for the mineral hematite. Clovis culture had two sources for the mineral found at the La Prele site: quarries near Rawlins or Hartville.  Rawlins Red Quarry is over 100 miles upstream along the North Platte River. The Hartville Powars II Quarry is about 50 miles downstream along the North Platte River. This migration along the North Platte – Sweetwater corridor by the first Paleo Indians in North America dates use of this the human transportation route at about 12,000 years. 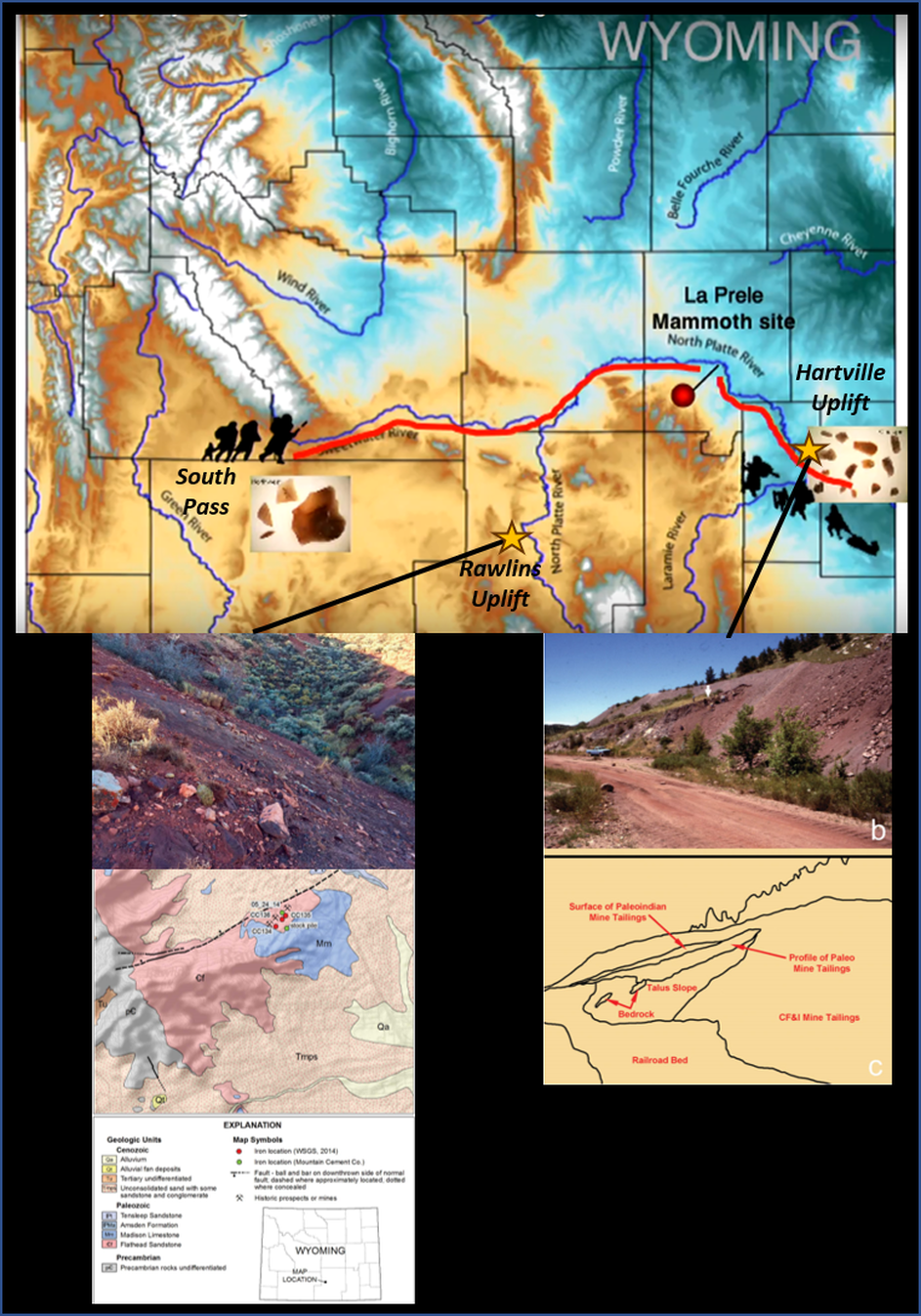 The privately owned La Prele Water District constructed a dam in 1909 in the canyon about one mile upstream of Ayres Natural Bridge. The abandoned pumphouse/power station near the natural bridge was built from a failed attempt to expand the irrigation district into the Glenrock area. The dam is located on the north flank of an anticline in the Madison Formation. Beds are tilted 15-30 degrees north. La Prele Creek has carved an 800-foot canyon into the anticline since Oligocene time (34-23 million years ago). It is called a superimposed stream that are common in canyons of Wyoming (e.g. Wind River, Big Horn, Shoshone, Flaming Gorge, etc.). 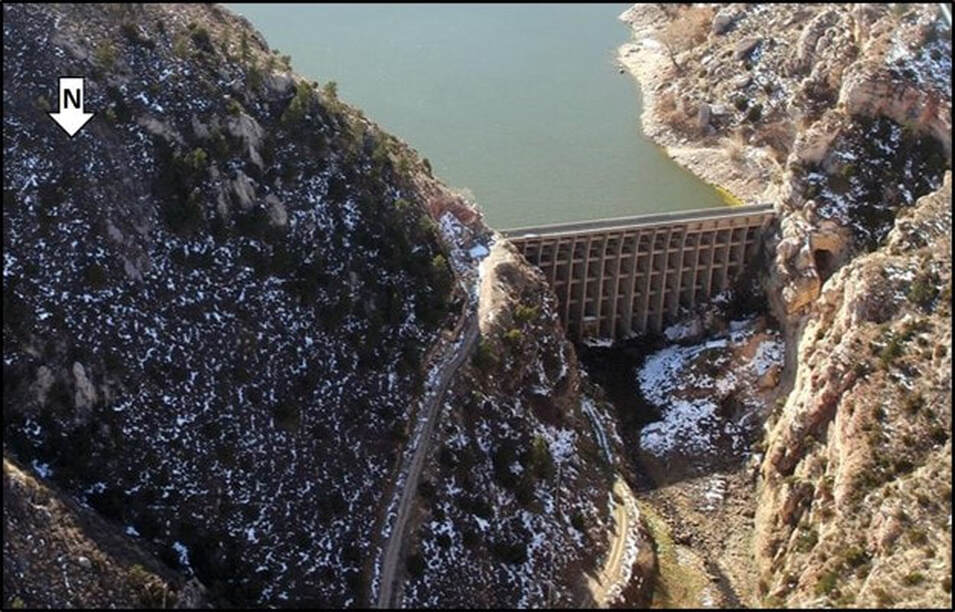 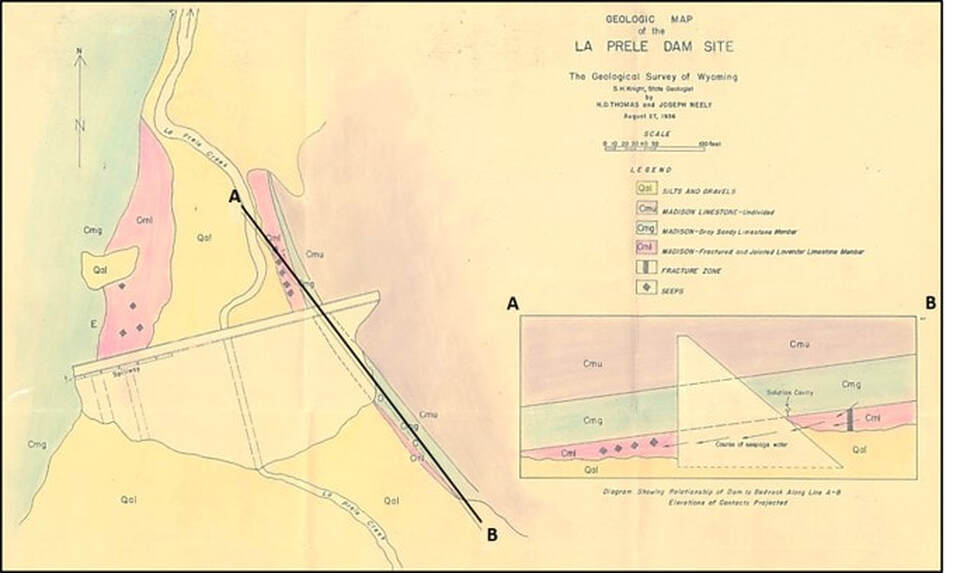 The 1916 oil discovery of Big Muddy Field near Glenrock produced high quality oil from several Cretaceous reservoirs including the Shannon, Wall Creek, Frontier, Muddy and Dakota Formations. The first sub-granite production in the Rocky Mountain Region was found in 1971 at True Hakalo #31-6, nw ne 6-32N-75W. The discovery of oil was the fuel that enabled the economic growth of the communities from Casper to Douglas. 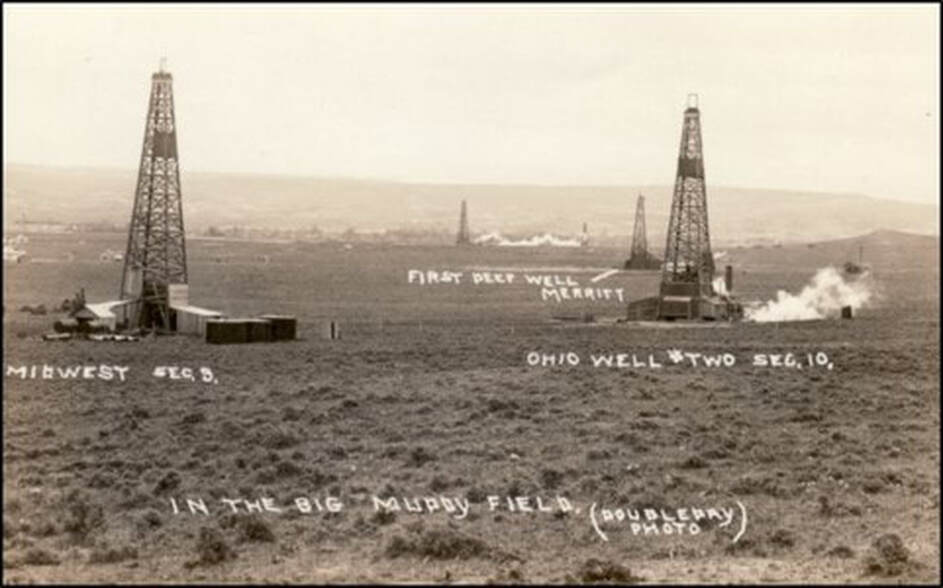 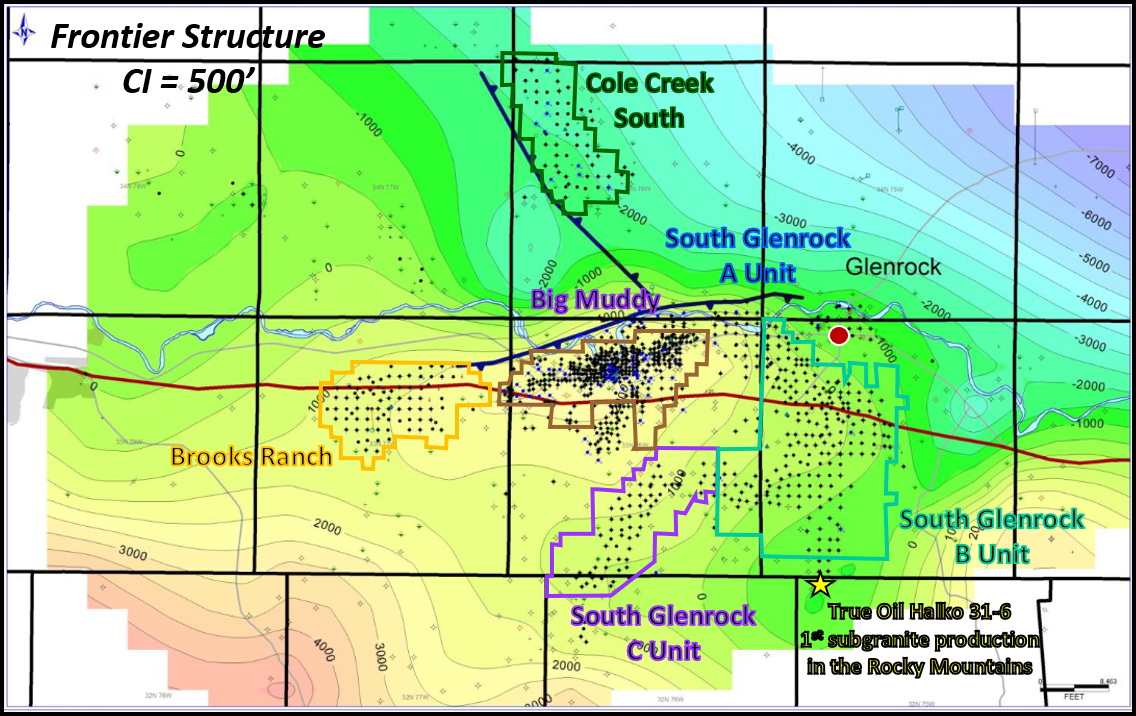