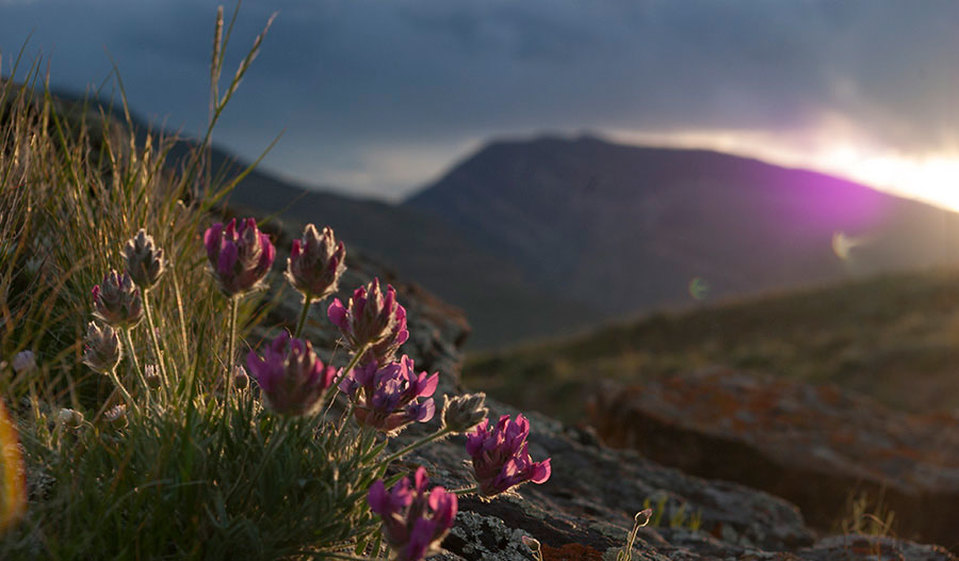 In the winter of 1807 John Colter passed through the canyon of the North Fork of the Shoshone River. His description of the area with a “boiling tar spring,” fumaroles and sulphur-smelling hot springs near the confluence of the North and South Forks of the Shoshone River (originally named the Stinkingwater River for good reason) was not believed.  Other reports of the area attributed the observed thermal activity to “subterranean fires.” The “imagined” thermal place reported by the mountain man and others was jeeringly called “Colter’s Hell.” 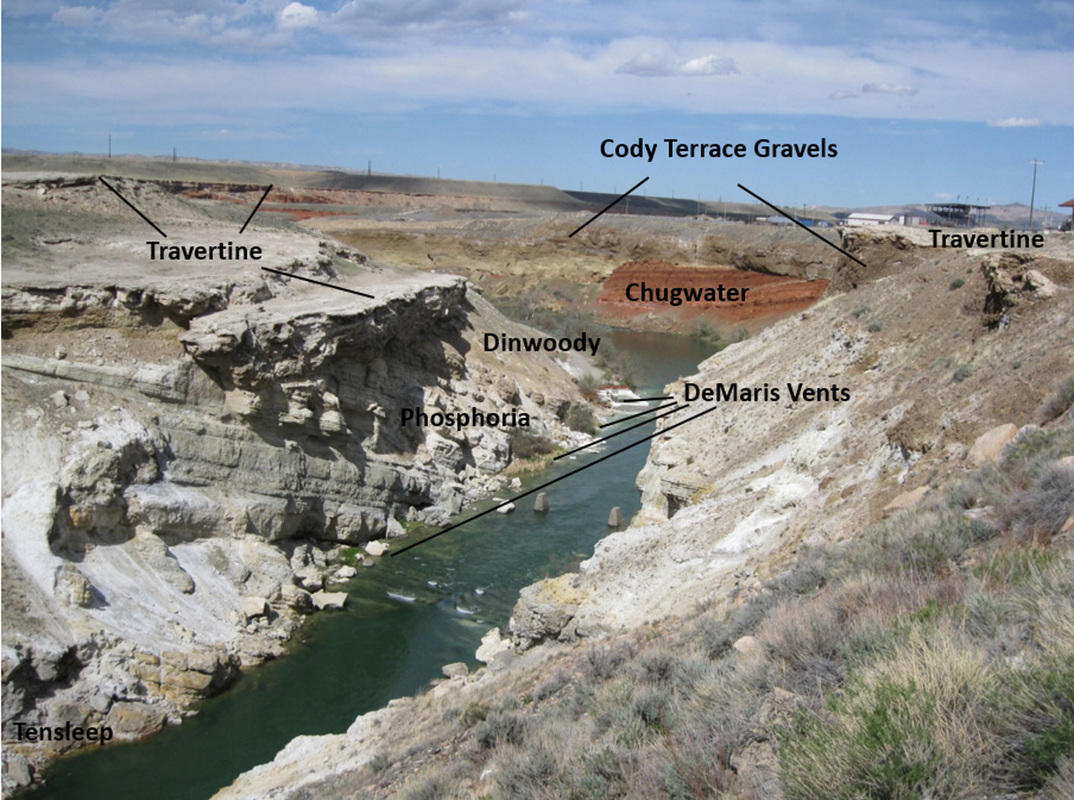 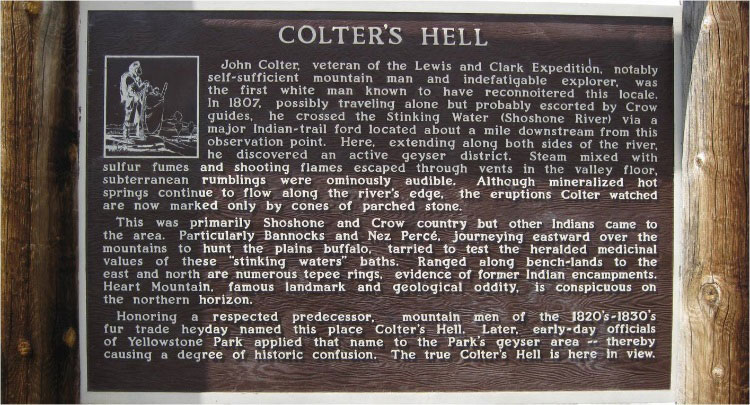 Interpretive sign at DeMaris overlook. Image from: Fisher, M.P., 2016
But Colter’s story was true.  The features he described are the surface expression of the Cody hydrothermal system.  The thermal features have nothing to do with Yellowstone or the nearby Absaroka volcanic activity which ended over 45 million years ago.  Rather it is groundwater being heated by the earth’s geothermal gradient as it circulates eastward from a basin beneath the Absaroka Mountains to rise along the outcrops at Rattlesnake anticline.  Geothermal gradient is the rate of temperature increase as depth increases.  The Bighorn basin average geothermal gradient is 16 degrees Fahrenheit per thousand feet.

Generalized model of the hydrothermal system showing simplified structure, paths of water flow and approximate temperatures and depths. Image from: After Heasler, H.P., 1985, Wyoming Water Research Center, Fig. 3, p. 4. http://library.wrds.uwyo.edu/wrp/85-11/85-11.pdf
There are four hot spring areas along the Shoshone River.  The furthest east is DeMaris spring which extends about 720 feet along the north bank of the river.  The spring has seven major vents flowing from the Permian Phosphoria and Tensleep formations (250 and 300 million years) with 75-93o F water temperature.  Shoshone spring, located about 3,900 feet west of DeMaris, has five vents that flow from the Pennsylvanian Amsden formation (315 million years) with water temperatures from 82-93o F.  Needles spring, located just east of the Hayden Arch Bridge on the north bank of the river, emerges from the Cambrian Pilgrim limestone (500 million years) that is covered by stream gravels and road fill.  An unknown number of vents flow 73o F water.  The last spring complex, Colter’s “boiling tar spring” lies beneath the Buffalo Bill reservoir on the south side and appears to be rising in the Tensleep and Phosphoria formations (300 and 250 million years). Investigation of data prior to the construction of the dam suggests this spring was located just off the northwest corner of Cedar Mountain.​ 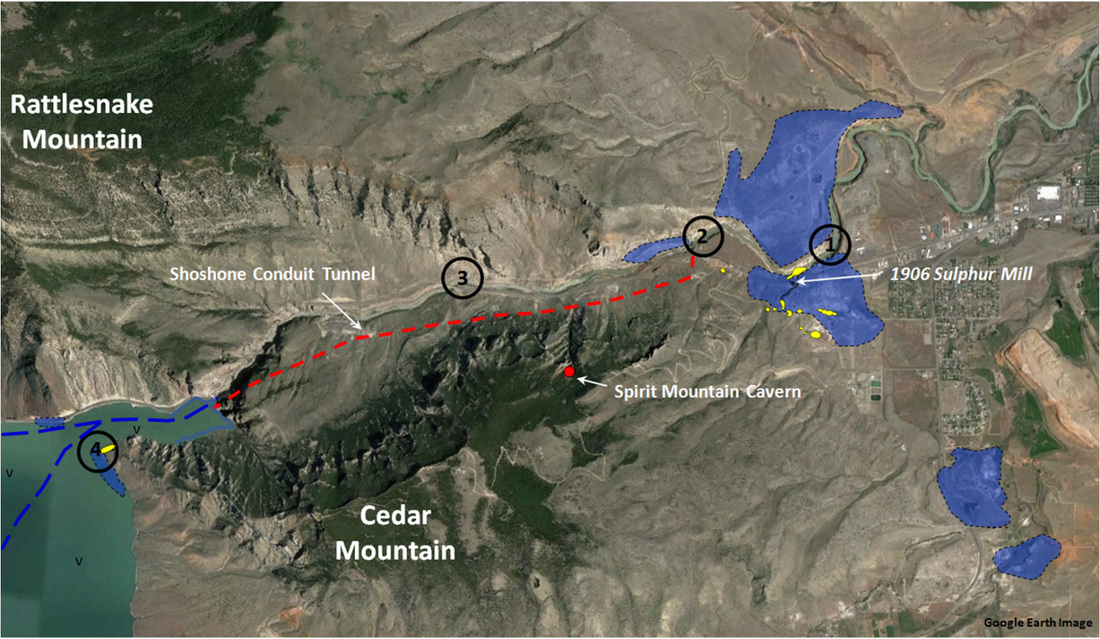 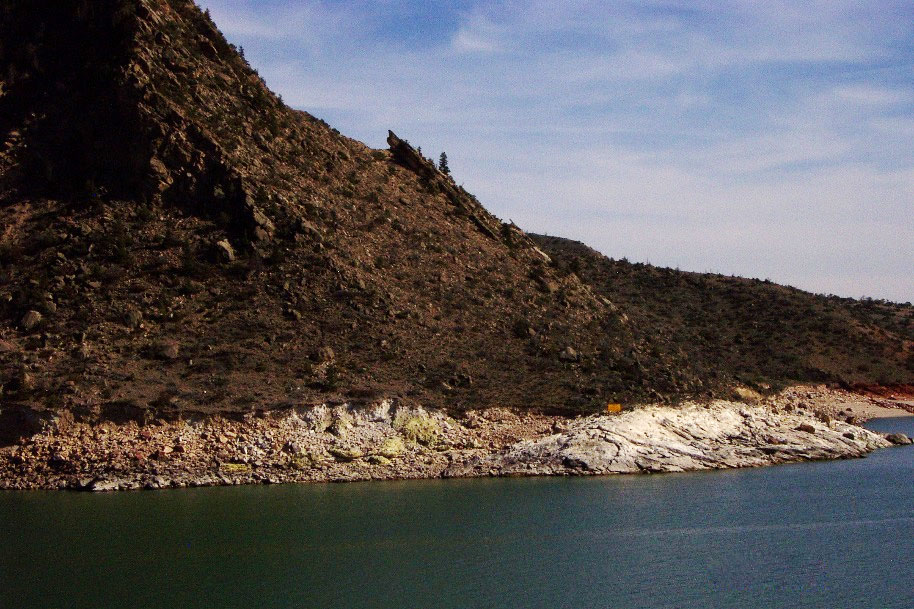 Travertine ledges occur at different levels in the canyon. The area just north of Colter’s Hell is a broad terrace that exhibits several hydrothermal features. The most dramatic feature is a large 40 foot deep sinkhole that marks the position of a former hot pool.
Travertine is deposited from hot springs that have hot water circulation through carbonate rocks.  The Cody Hydrothermal system is sourced through several such aquifers in the Phosphoria, Amsden, Madison, Bighorn formations and the Pilgrim limestone.  The bubbling water in hot springs releases carbon dioxide at the surface that allows a chemical reaction where free carbon ions (Ca2+) join with carbonate ions (CO32-) to precipitate calcium carbonate (CaCO3,  calcite or travertine).
It has often, incorrectly, been reported that there are extinct geysers in the Cody thermal area. The abundant travertine deposits and the lack of geyserite (siliceous sinter) disprove this claim.  Geysers are hot springs with a constricted throat geometry that does not allow for degassing at the surface.  They become overpressured beneath the surface until the steam forces the water column upward.  Travertine is not strong enough to withstand the pressure needed for a geyser to form.  Geysers are also near active volcanic systems.  Geysers only deposit siliceous sinter and at a significantly slower rate.  The most frequently cited “geyser” feature is a 30 foot cone located on the south side of the highway near Colter’s Hell.   With temperature and source concentration assumed to be the same, a travertine cone of this height would take about 30 years to deposit. Siliceous sinter from a geyser would take 18,000 years to form.​
Subsurface well data indicates that the Cody hydrothermal system extends at least seven miles south of the canyon (Horse Center anticline).
​
A recent (March 25, 2016) short-lived hydrothermal feature appeared at a bend in the Shoshone River near the contact between the Gypsum Spring and Sundance formations. There are no known faults in the area but fractures exist that may account for the flow. (There were two recent earthquakes west of Pollux and Caster Peaks near the confluence of the Lamar and Little Lamar Rivers about 47 miles west of Cody: Mar. 17 & 22, 2016 both with magnitude 1.9 at 42,650 foot depth). 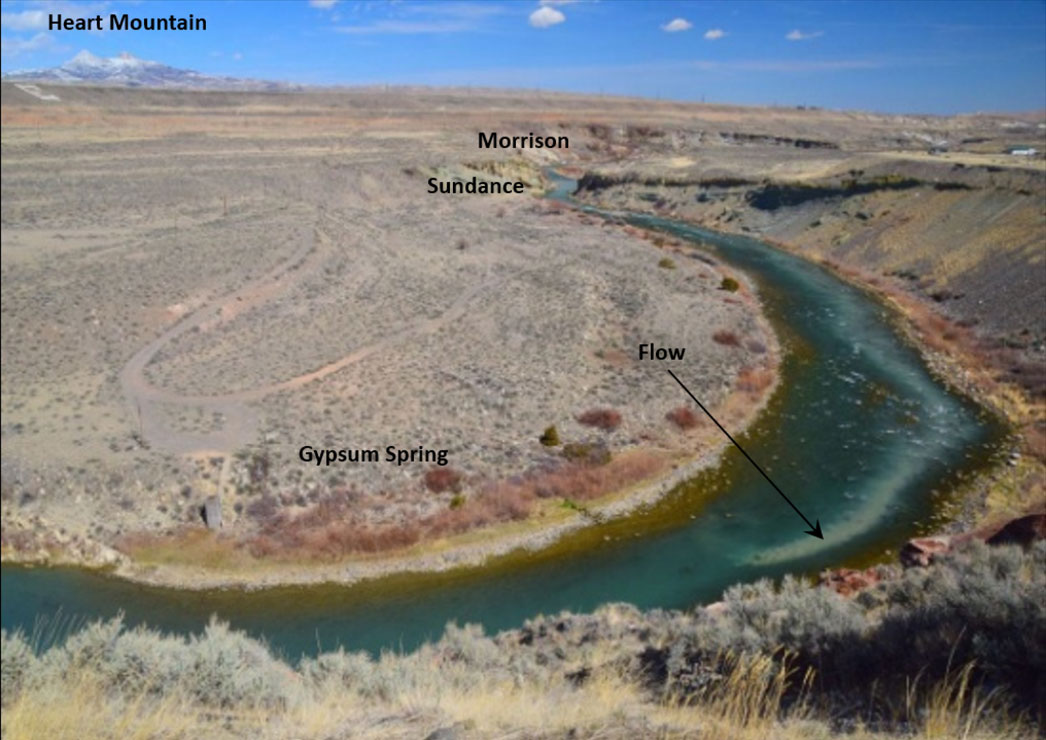 Short-lived hydrothermal flow plume in the Shoshone River in 2016.
Image from: Vanderhoff, D., 2016 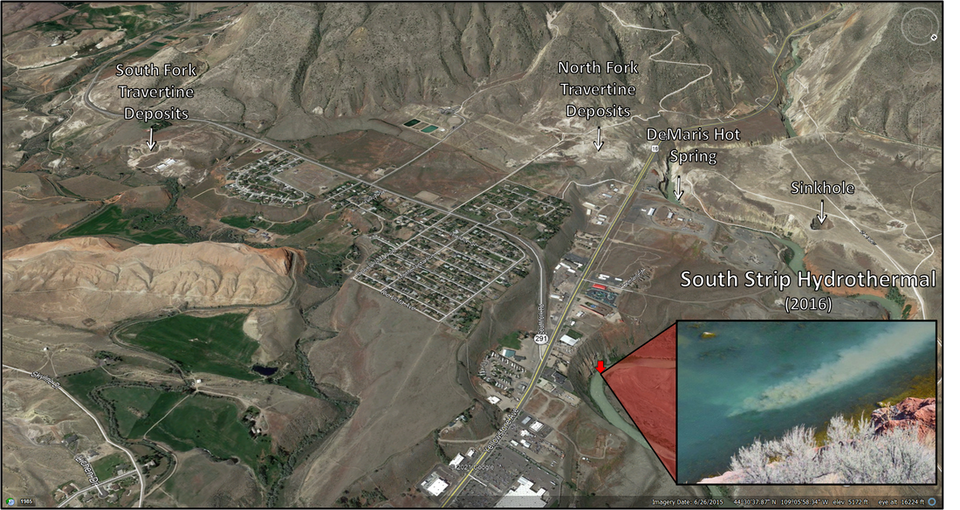 Short-lived hydrothermal flow plume in the Shoshone River during 2016

What you will see at Cody Hydrothermal System

​Stand to the left of the Colter’s Hell interpretive sign at the Demaris hot springs pull-off and look across the river.  On the left you will see orange and yellow colored Pennsylvanian Tensleep Sandstone that has been altered by the geothermal fluids that passed through the rock.  On the right near the pylons in the river are outcrops of the Permian Phosphoria Formation dipping east into the basin. The Phosphoria and Tensleep are two of the most prolific oil producing layers in the basin.  The flat lying beds at the top of the cliff are travertine limestones that were deposited by the hot springs. To the far right next to the river is the Demaris hot springs where the hot water is now contained in an open swimming pool (private).  The spring is named after Charles Demaris who homesteaded a 160 acre parcel around the spring in 1888 for its healing powers. This occurred prior to the founding of Cody.  Demaris ran a bath and bottled the water for medicinal value.  In 1902 he built a large two-story hotel/resort near the springs along the road to Yellowstone on the north side of the river.  In 1923, a new building enclosed the spring, but the roof was later removed to let out the strong sulfur odor.  Although the building was destroyed by a flood in 1981, the public continued to access the pool/spring via a rickety old bridge.  Eventually the bridge was removed and access closed by the owner.

​Starting at the intersection of US 14-16-20 (Sheridan Ave) and US 14A (16th St) in downtown Cody, head west toward Yellowstone on US 14-16-20. Travel through town, 0.8 miles Buffalo Bill Center of the West, 2.8 miles Old Trail Town, 3.2 miles Rodeo Grounds – Stampede Park, 3.3 miles on right is defunct Cody health spa that had a thermal indoor pool sourced from a 134 foot well that supplied 99 degree F mineral water at 209 gallons per minute.  At 3.5 miles large travertine cone on left (see picture above), 3.6 miles pull-off to right for view of Demaris hot spring and Phosphoria outcrop, 4.0 miles turn left for optional rough road part-way up Cedar Mountain.

This is a steep, very rough rocky road on BLM land. You don’t need 4WD, but you want to have good ground clearance. It is not suitable for passenger vehicles, but we have seen them up there. Road is narrow, just a single lane with occasional pull-off spots for passing on-coming vehicles. At 0.9 miles from the turn-off, park in large, mostly flat area on right that can accommodate a number of cars, walk about 100 feet up the small hill toward Cody (east-northeast) for view toward Cody and the basin. The outcrops where you parked and took this short walk are Tensleep Sandstone that were deposited as wind blown sand. Looking to the northeast across the river, there are three sinkholes on the flat travertine terrace that probably contained natural thermal pools. The upper part of this road reaches a closed gate that is private property.​ 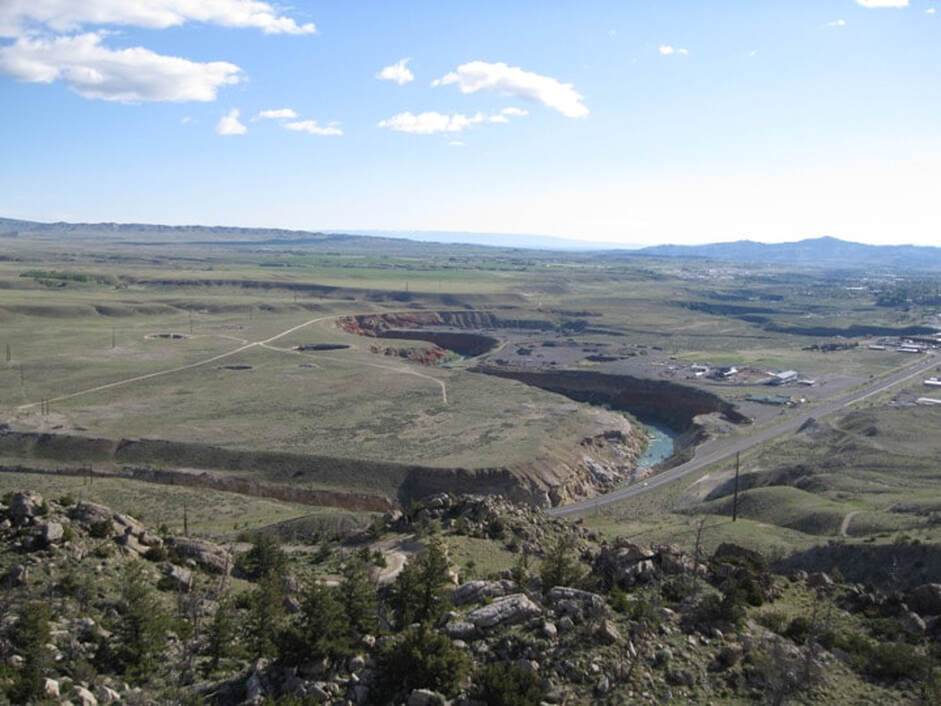