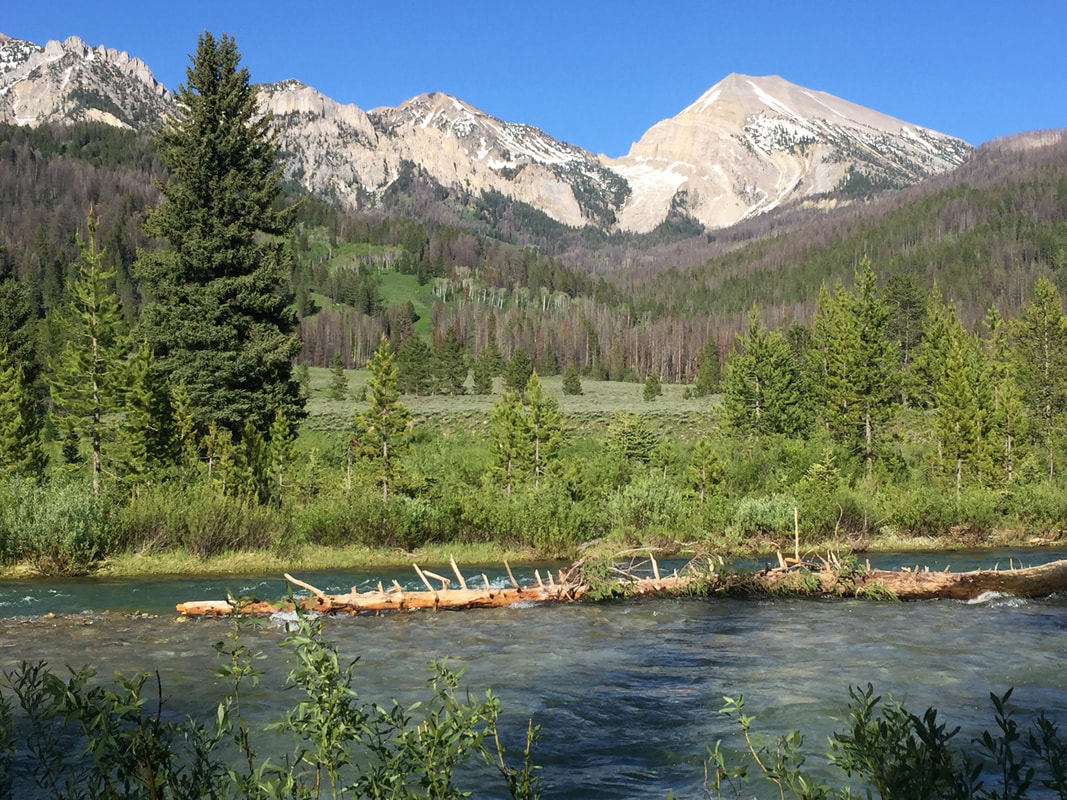 For at least 11,000 years native Americans travelled through the Gros Ventre Range area for summer hunting of big game. European fur trappers came for the pelts of beaver from the Spring thaw till the annual rendezvous in early Summer. Today, tourists and locals come to enjoy the spectacular landscape, wildlife and hot springs in all seasons.

Geology of the Gros Ventre Range

The Gros Ventre Range (pronounced Grow-vont) is located west of the Continental Divide between the Wind River Range (east) and the Teton Mountains (northwest) and the Hoback Range (west). They cover an area of 270 square miles with peaks between 10,000 to 11,500-foot elevation. At 11,270 feet high, Doubletop Peak is the highest mountain in the range. The Laramide orogeny created the range about 50 million years ago in the Early Tertiary. The ancestral Teton-Gros Ventre uplifted a northwest-trending asymmetric arch over the surrounding basins by reverse faults rooted in basement rock on southwest flank. The total amount of movement on the faults is about 5-10 miles. The uplift faulted and folded an 8,000-foot section of Phanerozoic sedimentary rock over the basement. The western portion of the ancestral range underwent greater erosion and was down dropped by the Teton Normal Fault that was superimposed across the ancestral structure in the Neogene between six to nine million years ago. 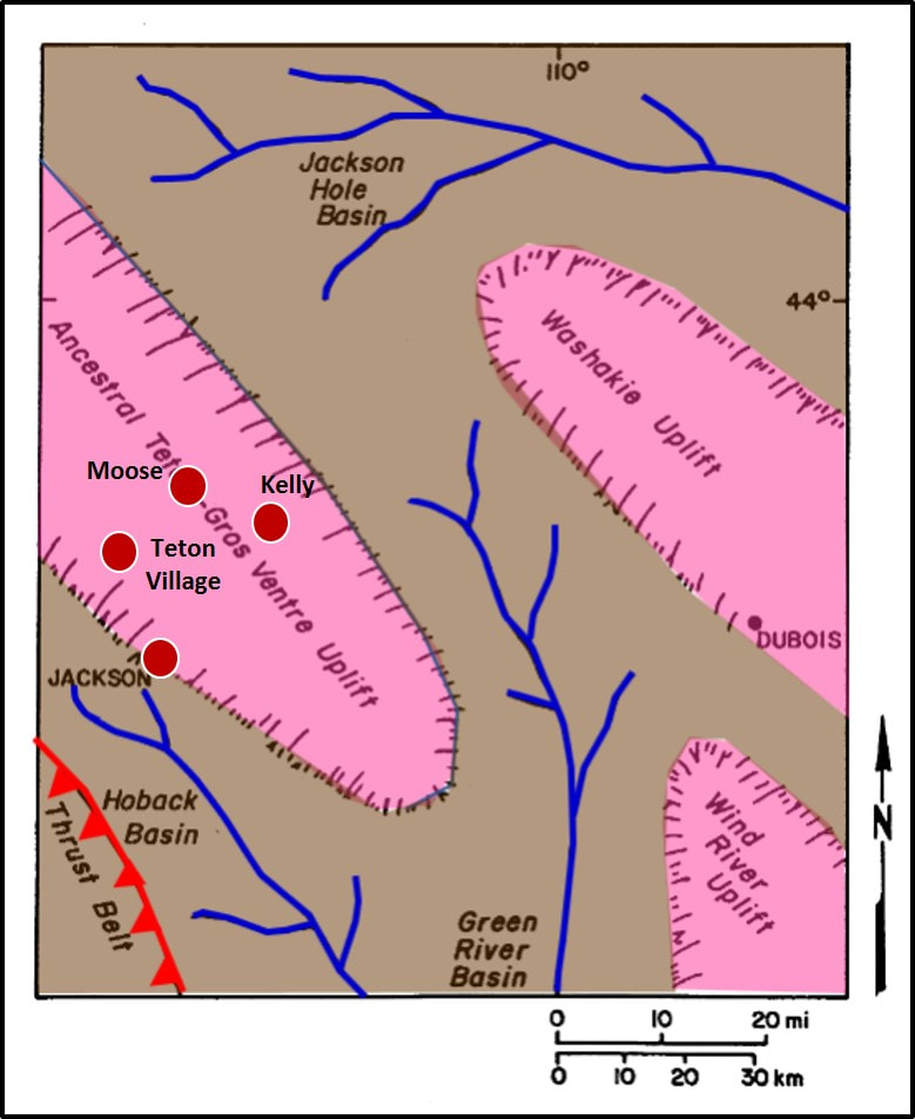 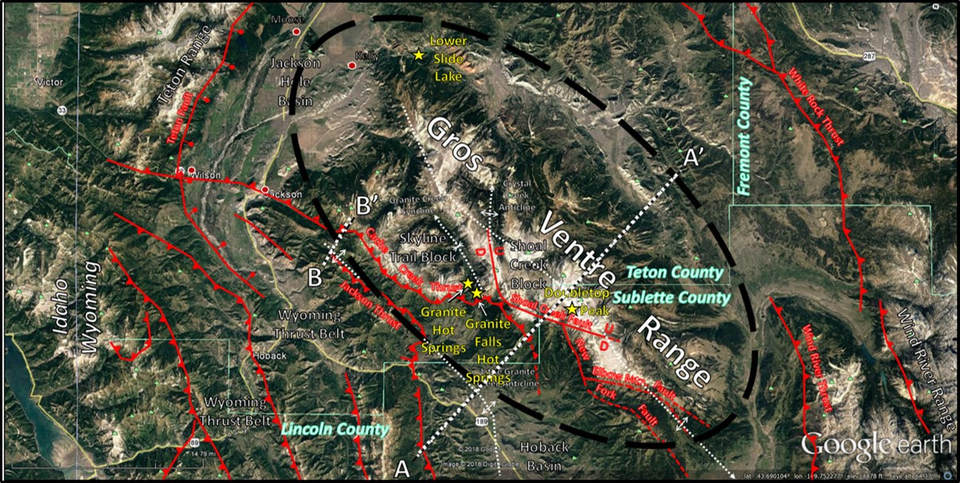 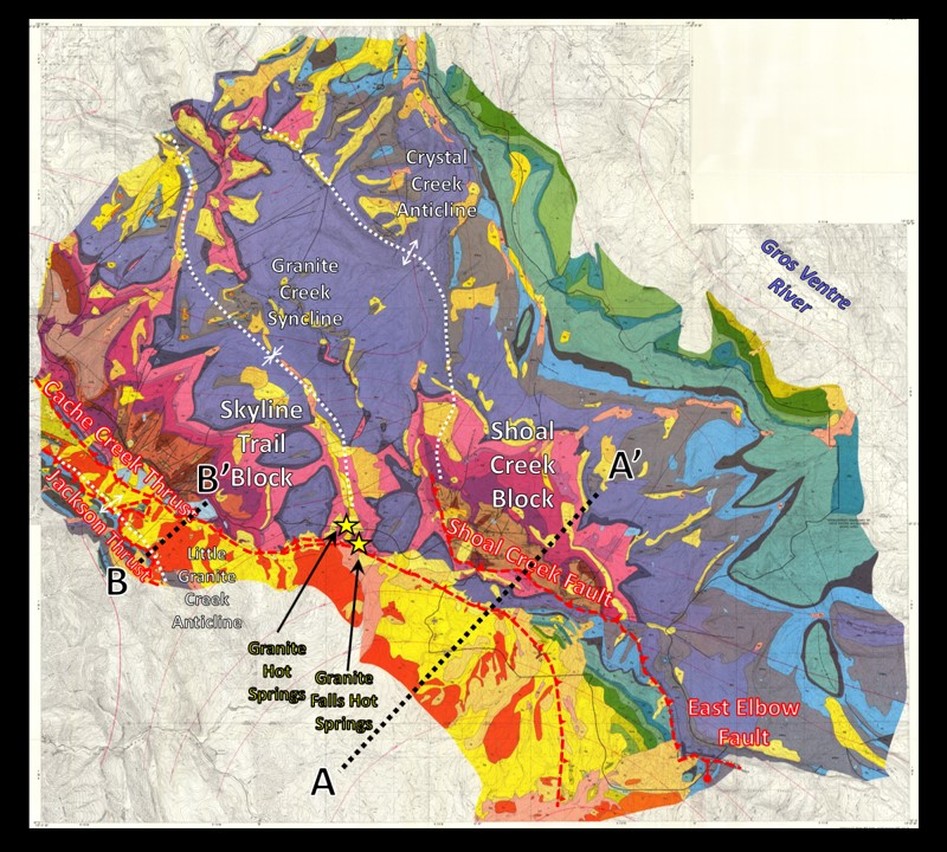 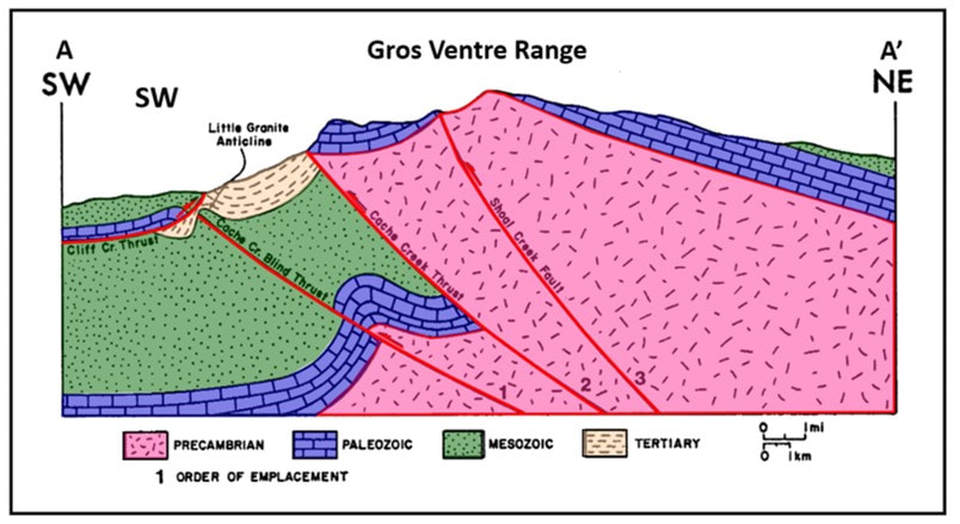 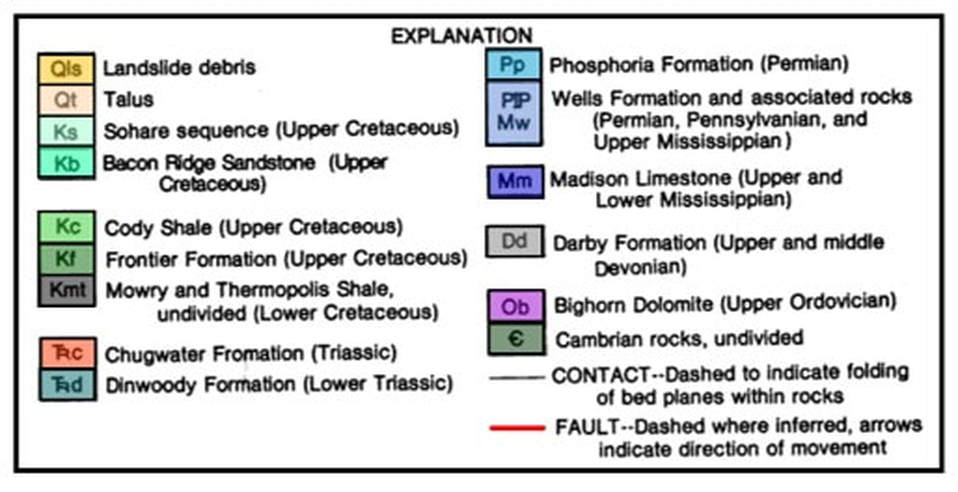 Stratigraphy of the Gros Ventre Range

The stratigraphic units exposed in the range are mainly folded Paleozoic and Mesozoic rocks on the upthrown blocks. Upper Cretaceous and younger units are found in the footwall to the southwest of the faults. 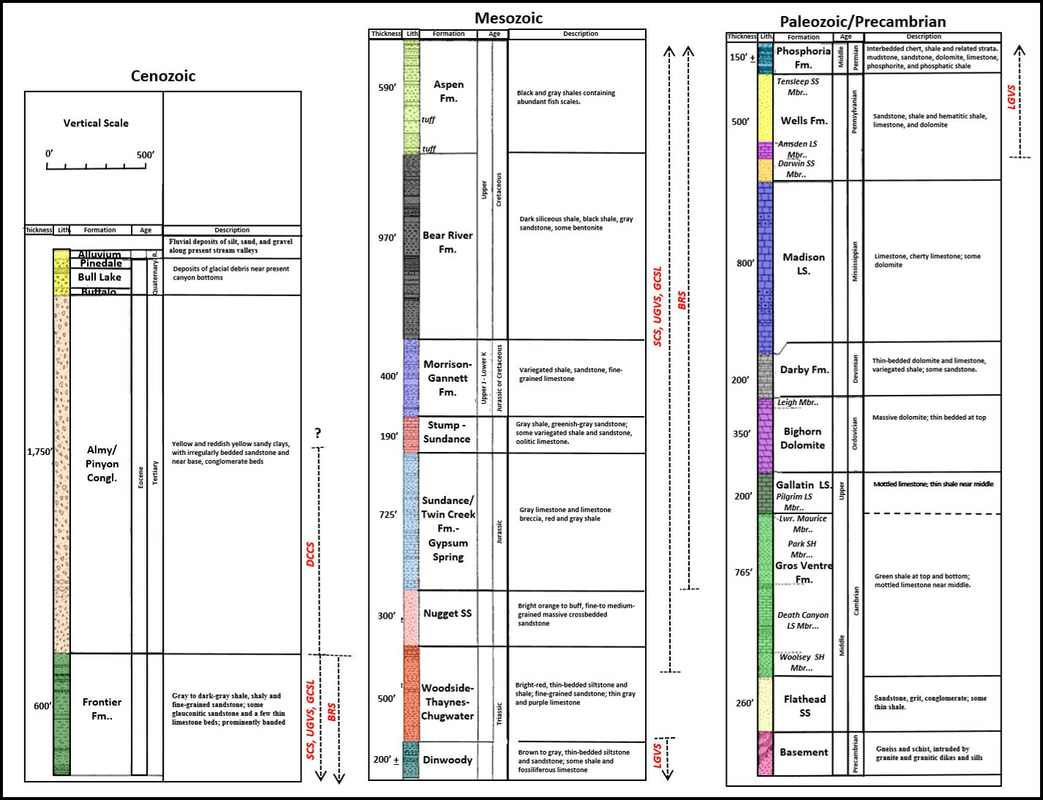 We highly recommend a trip to the Granite Hot Springs for a soak in the warm pool. The drive is scenic, there is a preety waterfall about 1/3rd mile before the pool and the hot springs is a well maintained facility in a remote location. There is a fee to use the pool and it has a summer season and a winter season (see Forest Service webpage for operation dates and times). In the winter, you can only access it via snowmobile, cross country skis, dog sled or fat tire bike. The pool is drained every night when operating, so there is no chlorination of the water. An undeveloped hot spring adjacent to Granite Falls is located on the east side of Granite Creek that we have not visited.  It requires crossing the cold and swift water of Granite Creek or another access option is to walk downstream from Granite Hot Springs on a path along the east shore of the creek. Directions from Jackson: head south out of Jackson on US 191 South/ US 26 West/ US 89 South, drive 13 miles to the roundabout in Hoback Junction and take second exit onto US 189 South/ US 191 South, drive 11 miles and turn left (north) on Granite Road/Granite Creek Road/ Forest Service Road 30500.  Drive on this gravel road that follows Granite Creek about 10 miles to the parking area for Granite Hot Springs.  Walk about 750 feet from parking area to pool. Total 34 miles, total driving time is just under an hour.
Hot springs near the Cache Creek thrust fault.  Left: Granite Falls & Granite Falls Hot Springs, Right: Granite Hot Springs pool.
Images: Left: Waves in the Desert Blog, 2014, http://www.azdon.net/blog/discovering-granite-falls-.html; Right: https://jhadventure.com/snowmobiles/.

Landslides in the Gros Ventre Range

​The valley of the Gros Ventre River is host to a number of landslides. Scars on the hillsides and hummocky, unsorted, angular deposits on the valley floor give evidence of this activity. The debris has occassionally dammed the river creating, lakes. The most recent slide occurred in 1925 about five miles east of Kelly, Wyoming.  The Lower Gros Ventre slide released a 50 million cubic yard mass down the north face of Sheep Mountain that slammed 300-400 feet up the opposite side of the river. It formed a 325 feet high,half mile wide dam across the river. The slide originated in the Tensleep sandstone 2,000 feet above the river valley.
Landslides can occur when slopes become unstable. The main factors are grouped into four catagories: geological, morphological, physical and human (Wikipedia). Multiple elements can lead to a slide.

Geological causes:  Morphological causes: Physical causes:
Topography  Geological Factors  Tectonic Activity  Physical Weathering  Hydrogeological Factors  Human Causes:
​Lower Gros Ventre slide involved several factors: 1) The river had eroded the toe of the Tensleep (increases slope angle), 2) beds were dipping into the valley at 20o, 3) abundant winter snow and spring rain had drained through the porous Tensleep Sandstone and saturated the surface of the underlying impermeable Amsden Formation, and 4) ground vibration from small earthquake activity.
Two years later the dam on Lower Slide Lake was overtopped and partially gave way which caused a wall of water to flood down the Gros Ventre River through the town of Kelly and reached far as Wilson 14 miles away. 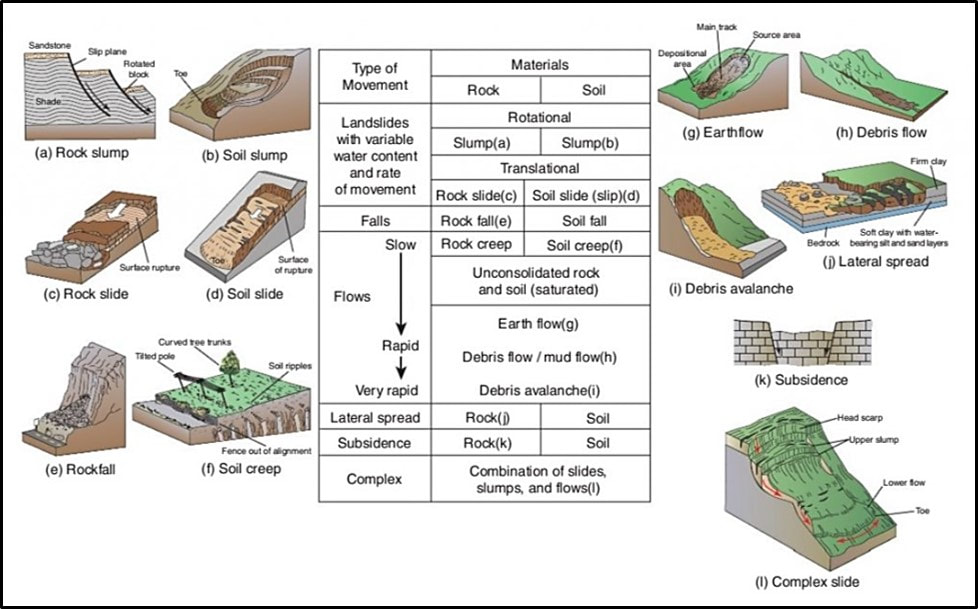 Types of mass movement. Classification of landslides, based on type of movement, materials, water content, and rate of movement (After U.S. Geological Survey 2004. Fact Sheet 2004-3072).
Engineering Geology, 2018, Types of Landslides, Fig.1; https://engineeringeology.com/2018/10/16/types-of-landslides.
The Slate Creek Slides are located six miles upstream from Lower Slide Lake. The area is on the north side of the river and encompasses several incompetent (shale and claystone beds) Mesozoic units. The numerous slides in the area include strata from Frontier to Chugwater. Most units moved as earth flows, but mud flows occurred also when precipitation was higher (see mass movement diagram above). The slide movement was to the south and southeast due to high relief, steep valley walls, and rock composition.

The Upper Gros Ventre Slide is five miles further upstream of the Slate Creek Slides along the north side of the valley. The coalescing of two slides blocked the river creating Upper Slide Lake. The stratigraphic units involved the same Mesozoic units as at Slate Creek.

Goosewing and Soda Lake Slides are located three miles upstream of the Dry Cottonwood Creek Slides along the southwest wall of the valley at the base of Sportsman Ridge. The slides moved down stream valleys and spread over the flats. The slides originated in Mesozoic claystones and shales. Soda Lake is impounded by slide debris.
​
Bacon Ridge Slides are five miles further upstream of the Soda Lake Slides located between Bacon Ridge and the southern end of Sportsman Ridge. Both sides of the valley produced slides in the saturated, incompetent Mesozoic shales and claystones. The area is still prone to slides, particularly in wet years. 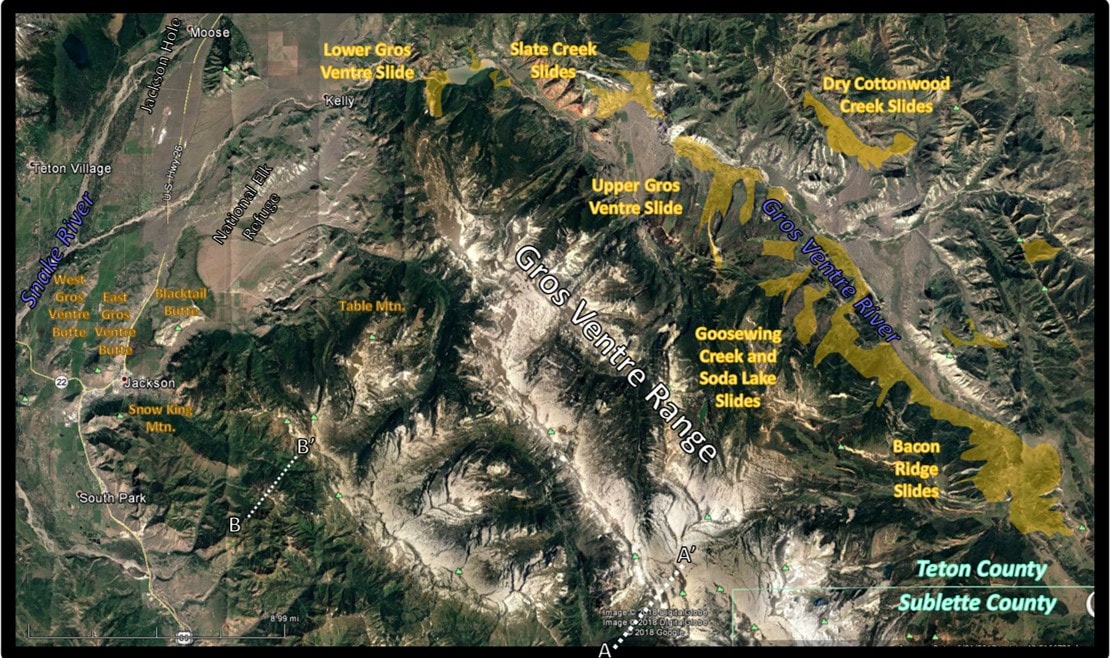 Images of Gros Ventre Valley landslides.
Image: Google Earth
The Gros Ventre Range is home to a large migratory population of elk and antelope. At least three pack of wolves roam the area: 1) Slate Creek, 2) Towgotee, and 3) Lava Mountain. This is the greatest number of wolves outside of Yellowstone National Park. Moose and bear also live here.
​
Sitting in a hot spring, relaxing in the spectacular wilderness scenery, with wildlife wandering past and the howl of wolves echoing across the mountain landscape is what makes this one of Wyoming’s top treasures. 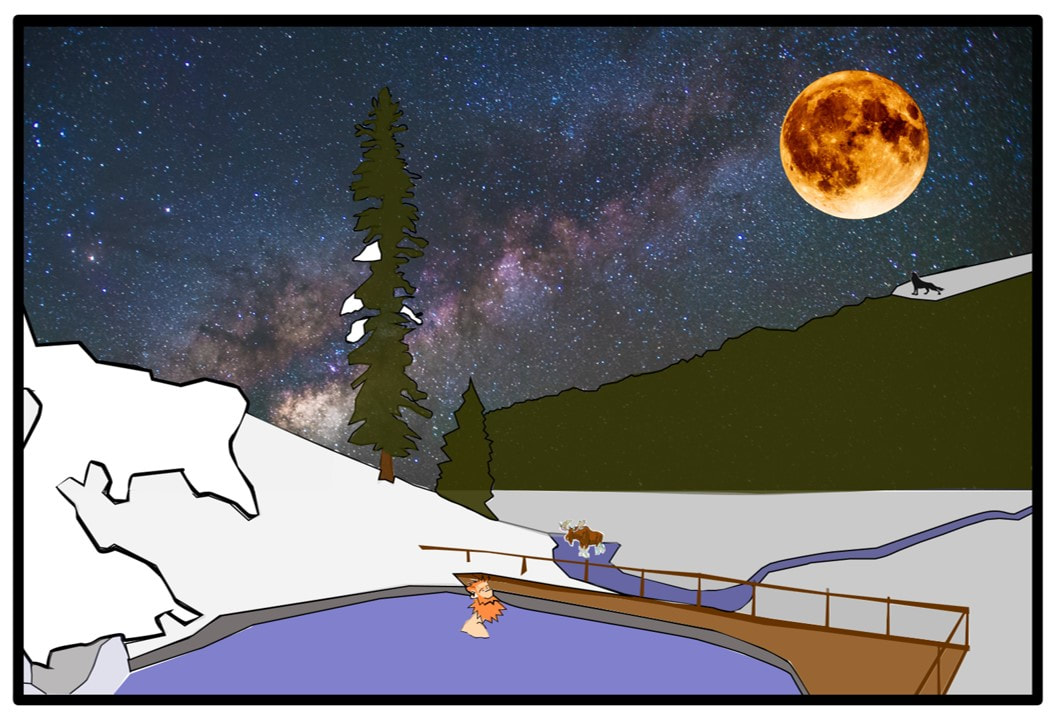