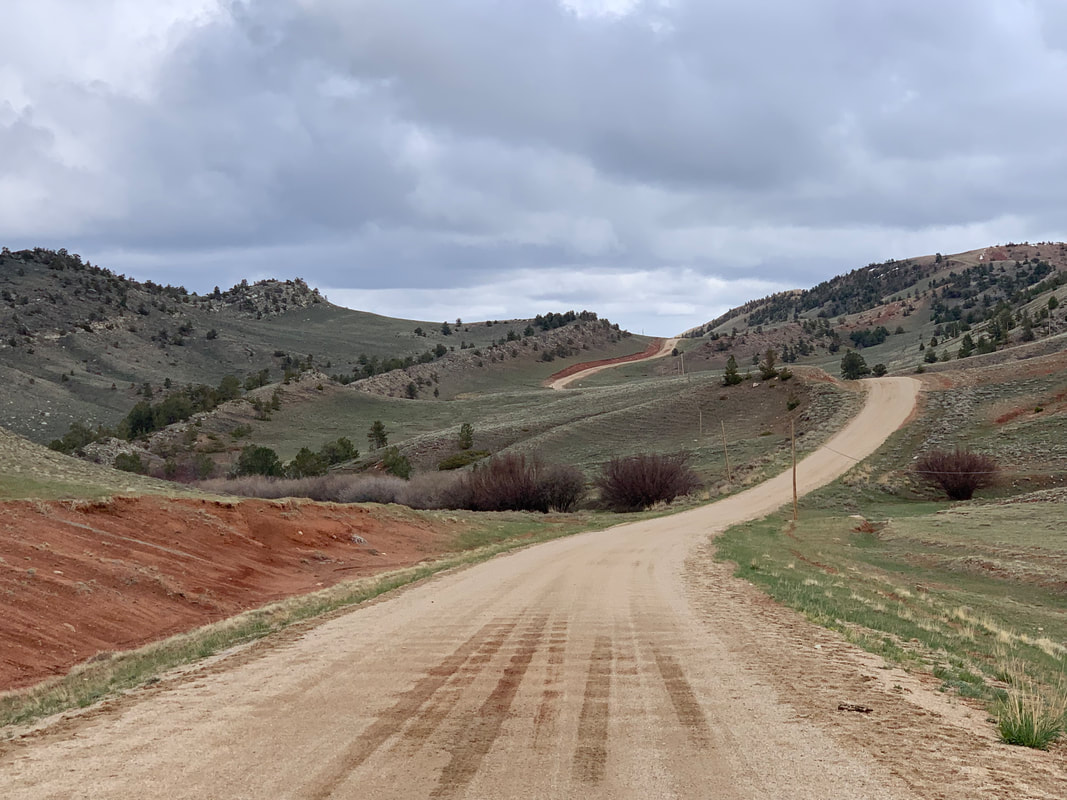 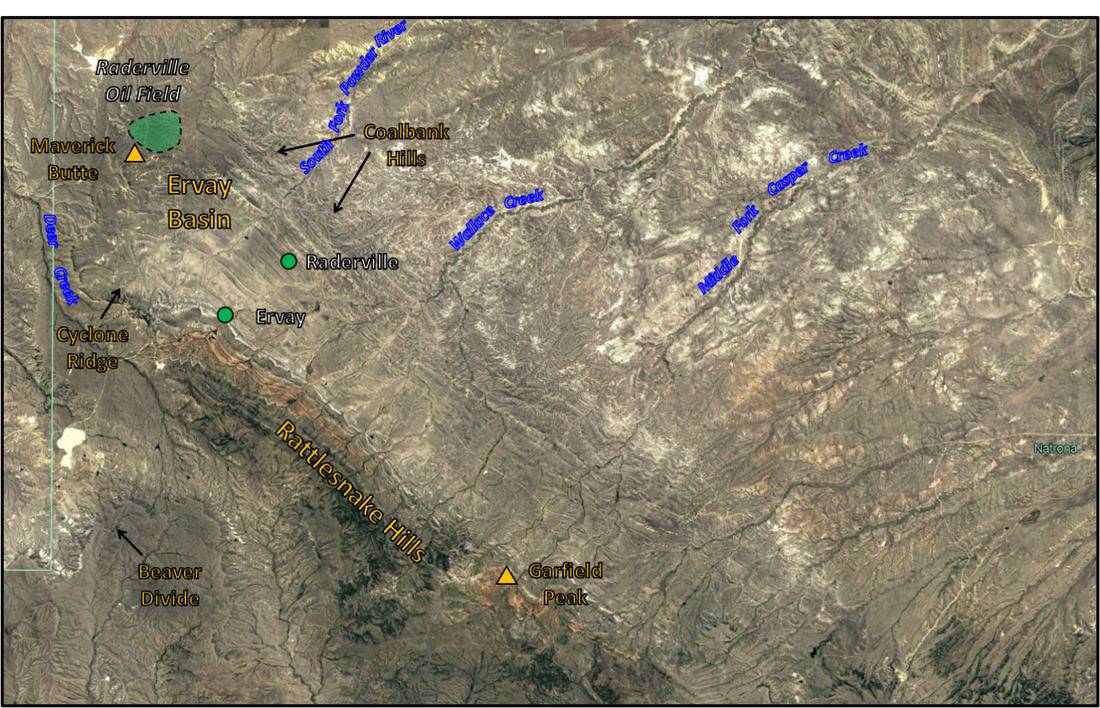 Ervay Basin at the north end of the Rattlesnake Hills Anticline is named after a discontinued Post Office in western Natrona County.  The town was founded by Jacob E. Ervay in 1882, who served as the first Postmaster and land recorder for the Rattlesnake District. He was also an early wildcat driller in the area at about the same time as the Murphy Brothers drilled the first oil discovery at Dallas Field in 1884.

The former townsite of Ervay (n, ne, nw Section 32, Township 34 North, Range 88 West) is located along the Casper to Lander stage line (Urbanek, M., 1988, Wyoming Place Names, p. 63). The route carried passengers, freight, and mail from the railroad terminus in Casper (1888) to Lander and Thermopolis. Little evidence remains of the stage road or stations. Stone Ranch station (Section 34, Township 35 North, Range 82 west) is one of the few structures remaining along the route. The station was listed on the National Register of Historic Places in 1982 (https://wyoshpo.wyo.gov/index.php/programs/national-register/wyoming-listings/view-full-list/711-stone-ranch-stage-station). The stage route was abandoned with the construction of the railroad to Lander in 1905-1906.

1899 advertisement for stage service from Casper railroad terminus to Lander, Thermopolis, and points in between. The Casper to Lander stage along the road. The stage from Casper to Lander cost passengers fourteen dollars, while the express rate was five cents. The 2020 equivalent value is about $395 and $1.40 respectively.
​Image: Left http://www.wyomingtalesandtrails.com/casper.html; and Right: http://www.wyomingtalesandtrails.com/lander2.html. 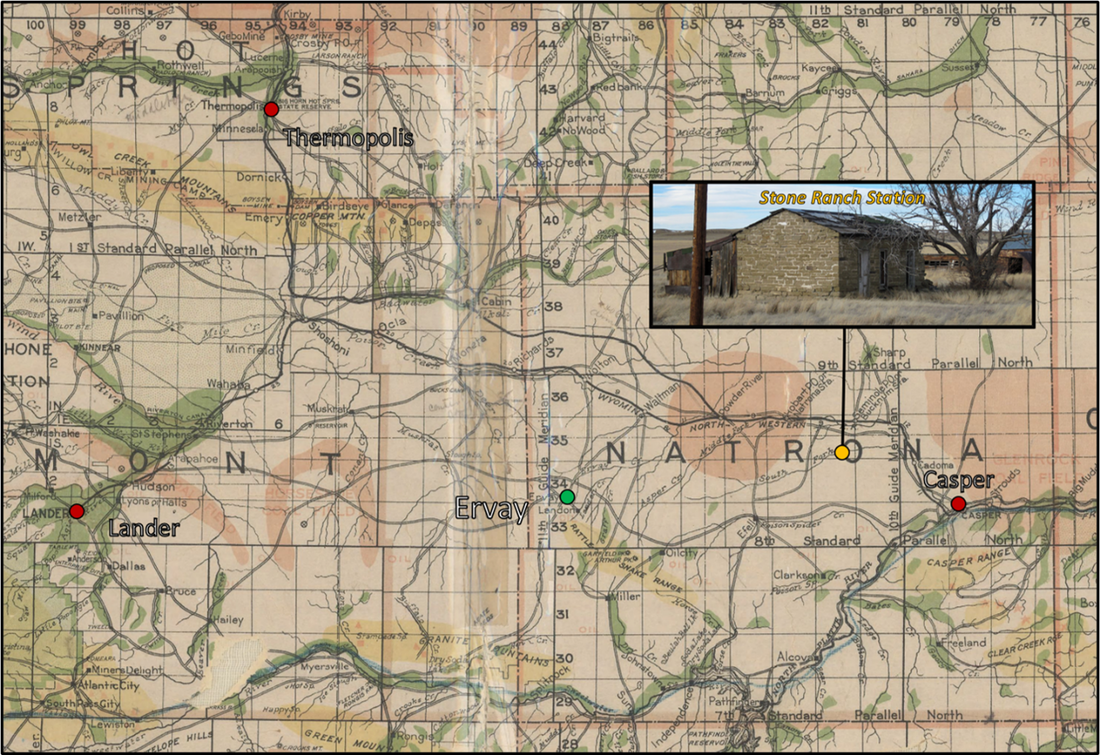 The landscape is a classic breached anticline on the Rattlesnake Hills fold. An anticline eroded into the center of the fold are referred to as a breached or scalped structure. The anticline erodes down the dip of rocks leaving the older units toward the center. This is like the layers of an onion have the oldest part in the core.  A topographic basin is formed when nonresistant shales are surrounded by escarpments of more resistant sandstone or limestone. The Eocene Wind River Formation forms the western escarpment and the ridge and swale topography of the Cretaceous Mesaverde, Lance and Tertiary Fort Union Formations border the eastern side. These eroded basins are common in the Rocky Mountains and are often called “sheepherder anticlines” due to surrounding rock “fence.” Serval large breached anticline examples are Oregon Basin, Little Buffalo Basin, and Elk Basin oil fields in the Bighorn Basin. The Rattlesnake Hills Anticline is eroded through the entire stratigraphic section and into the Precambrian basement. Raderville oil field is a combination trap located on the faulted northeast nose of the anticline. Stray sands within the upper Cody Shale have produced over eight hundred and ninety thousand barrels of 22.5 API gravity oil. 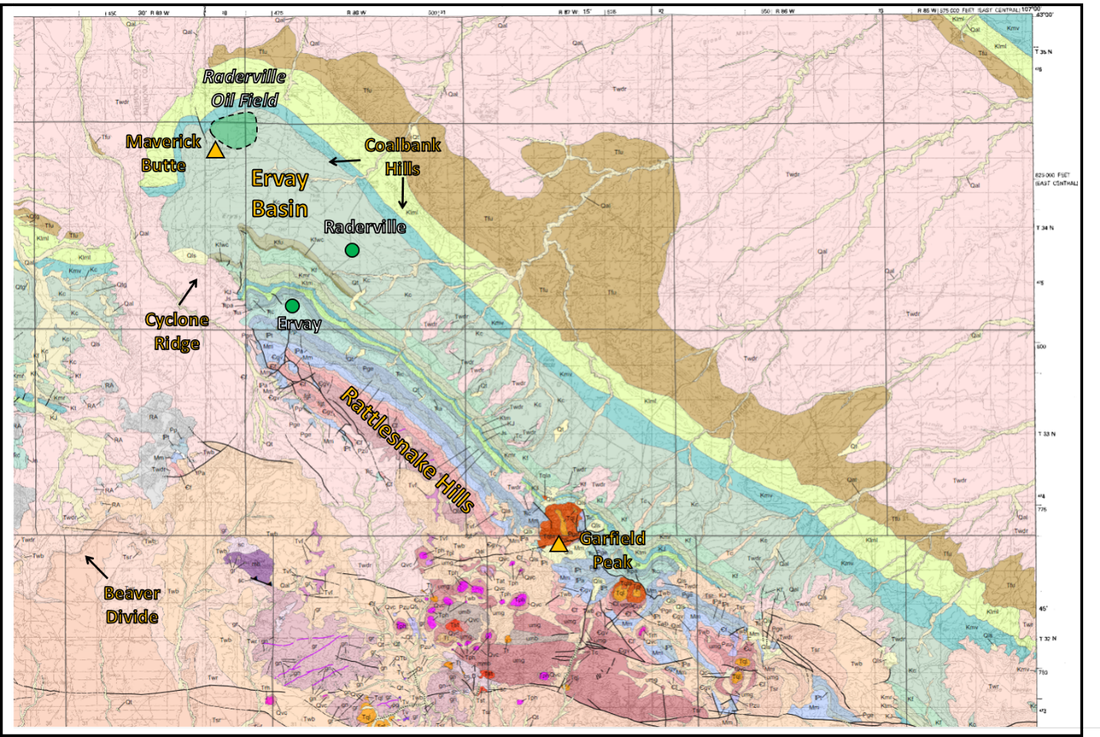 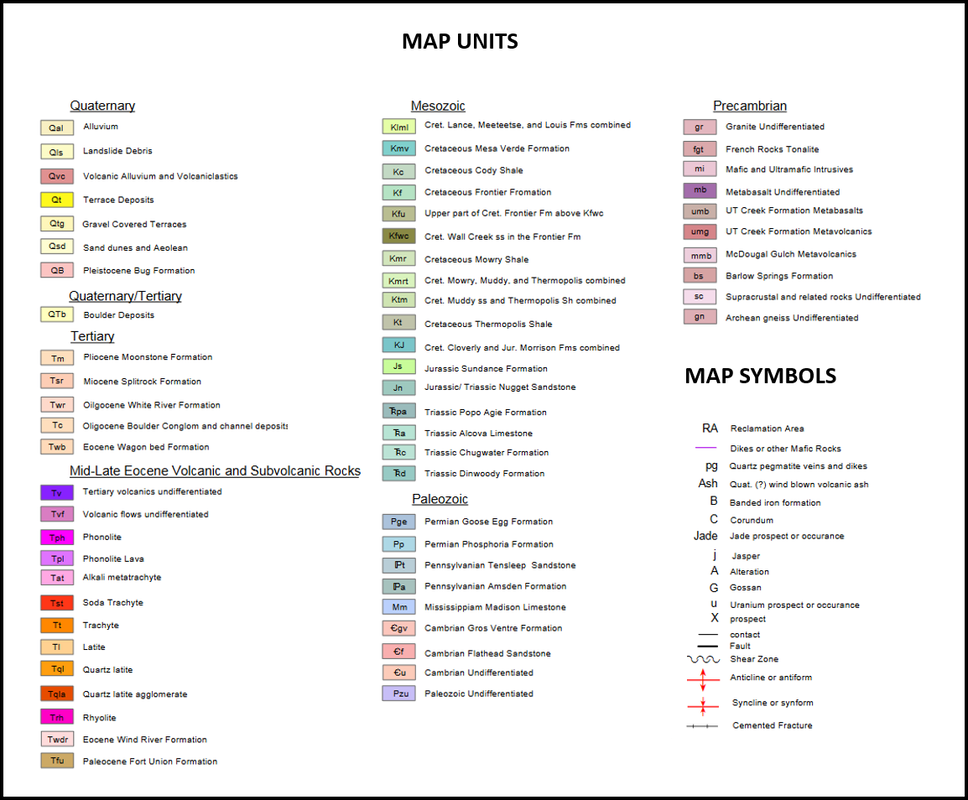 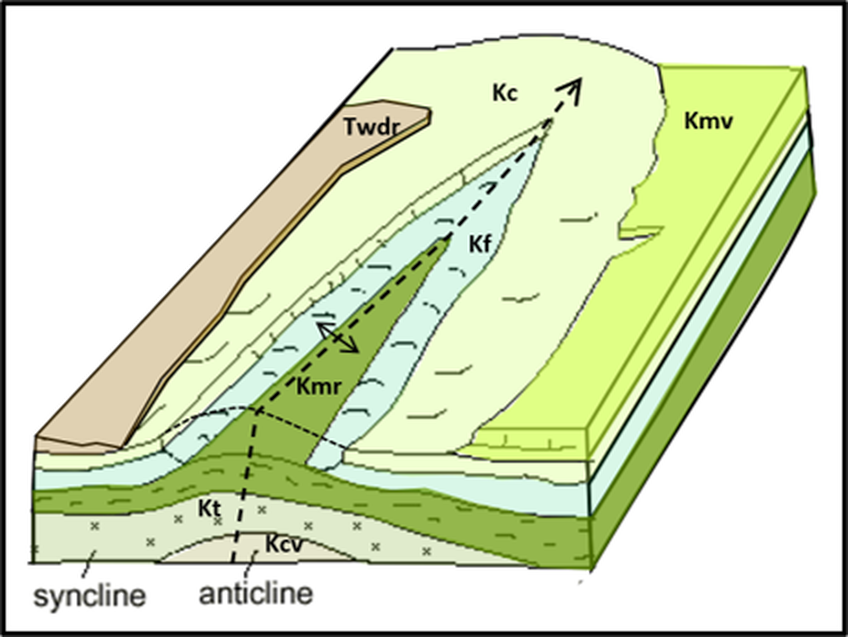 The Cody Shale was deposited over eighty million years ago (Ma) consisting of two parts: an upper sandy member (Santonian, 86-82 Ma), and a lower shaly member (Coniacian, 90-86 Ma). Both are marine deposits within the Western Interior Seaway that remained continuous from the Arctic to the Gulf during numerous transgression (sea level rise) and regression (sea level fall) cycles. The increase in coarser clastic sediment during Santonian time reflect the ongoing uplift of the Sevier orogen source area to the west. 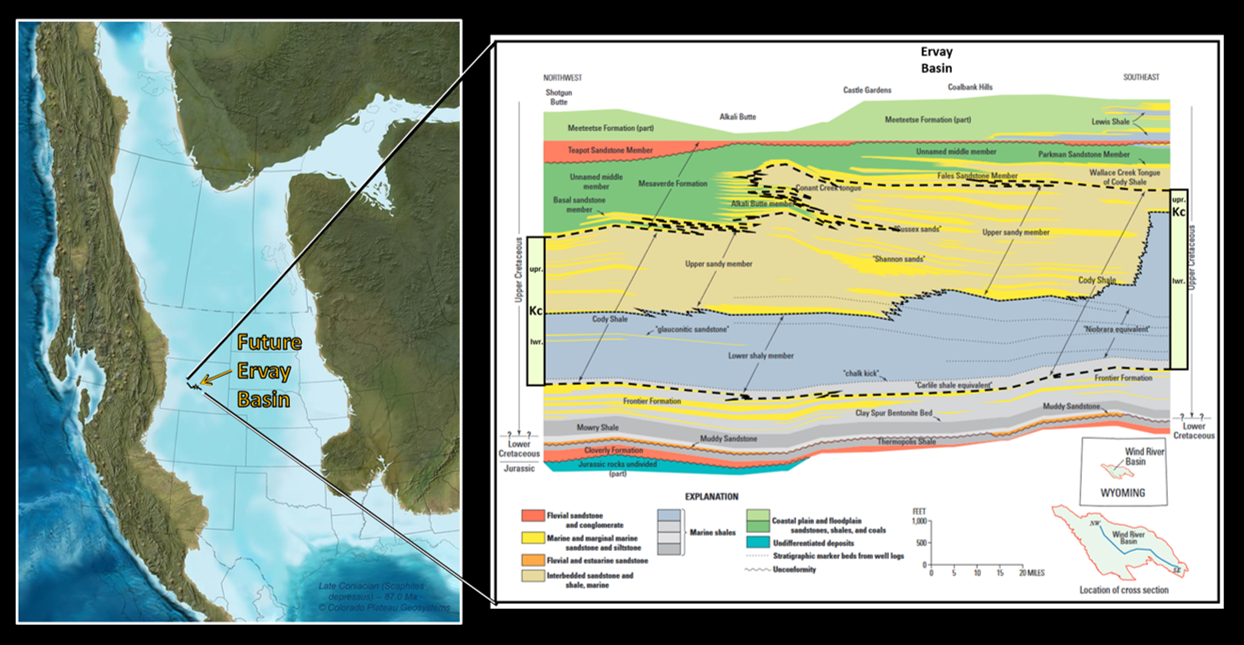 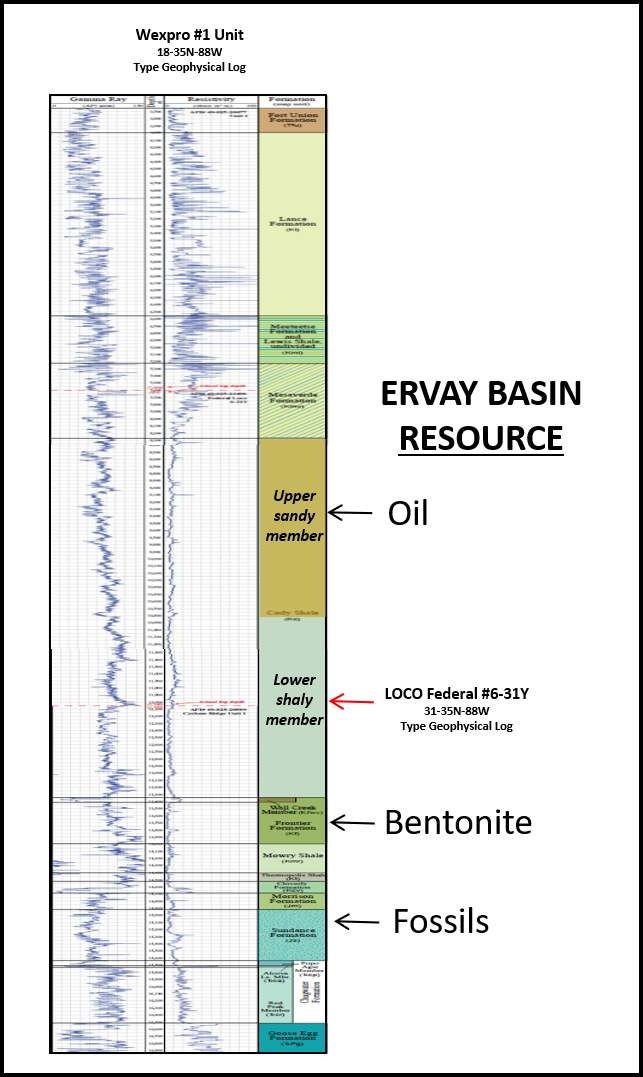 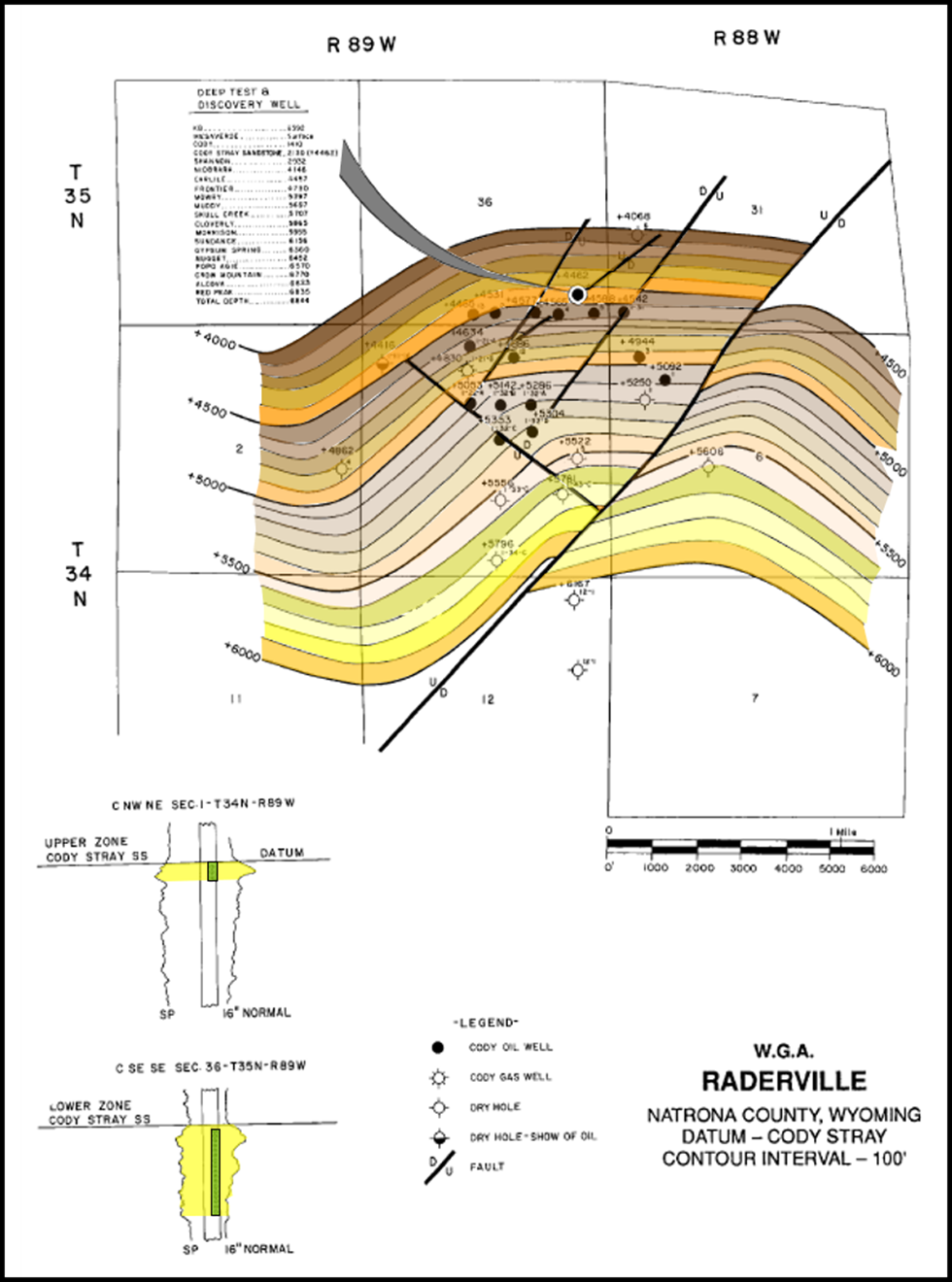 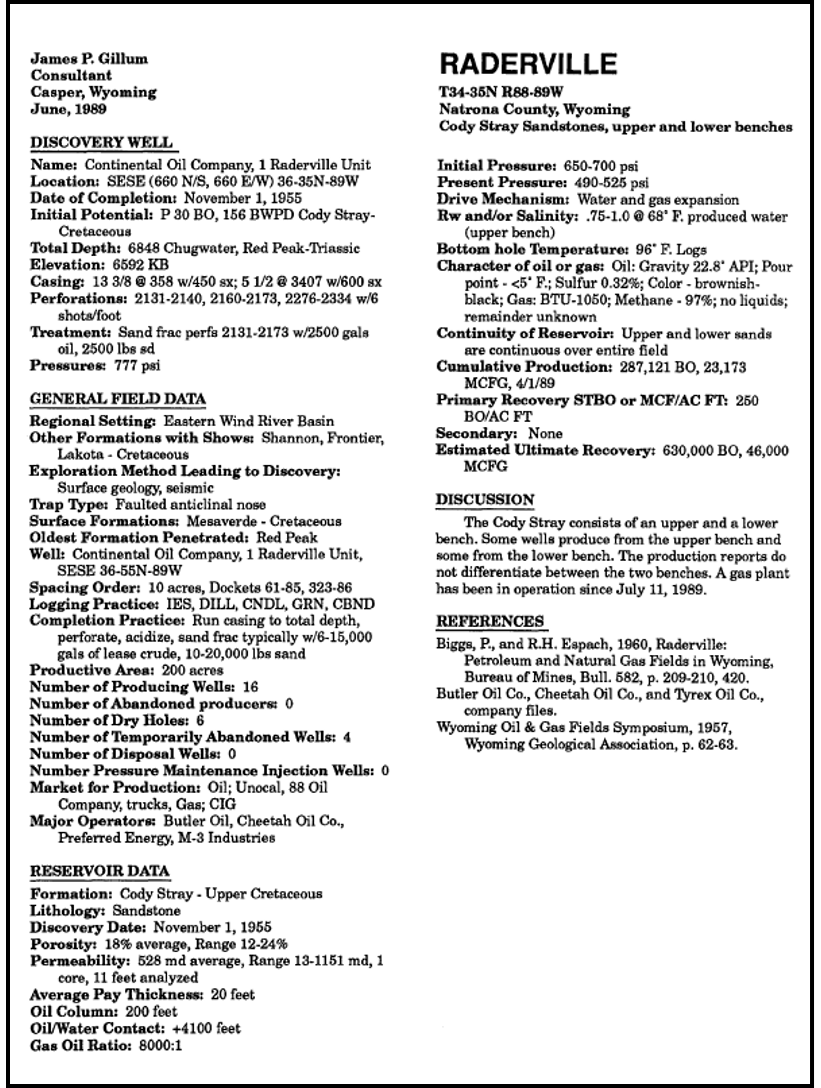 Bentonite is currently mined from the Frontier Formation on the Northeast limb of the Rattlesnake Hills anticline. Bentonite is a swelling clay made from altered volcanic ash. Active volcanoes during the Cretaceous sent a large volume of ash (glass) that rained down into the Western Interior Seaway. Wyoming holds 70% of the world’s known deposits of bentonite. 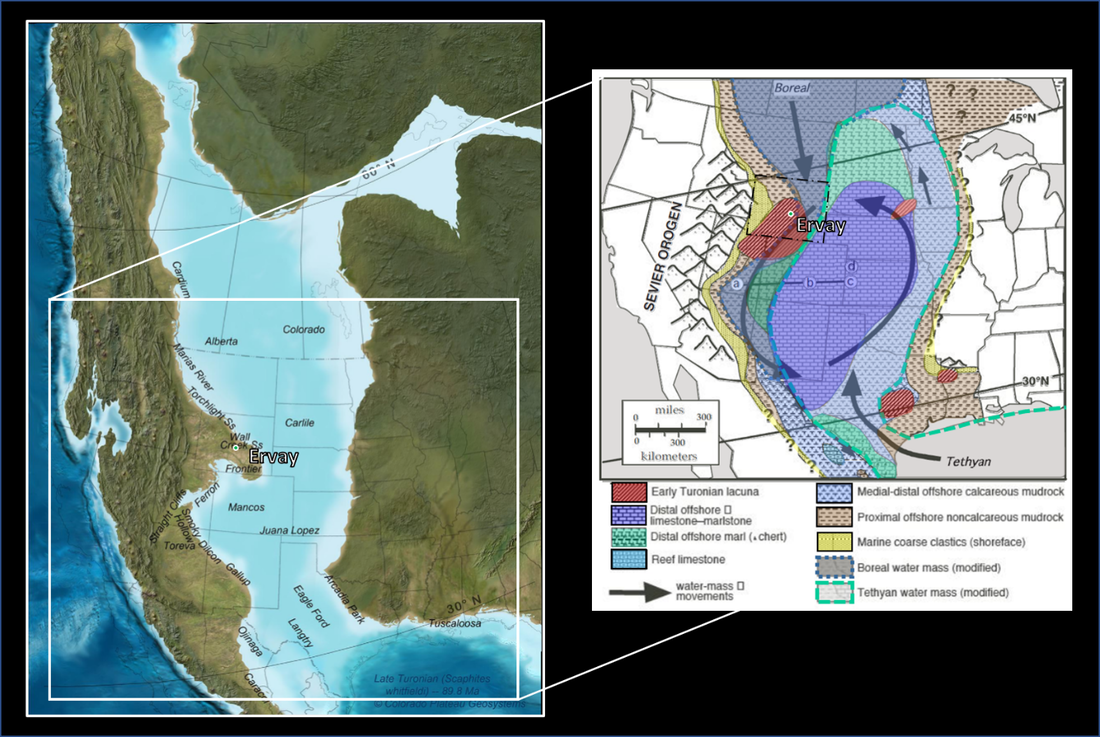 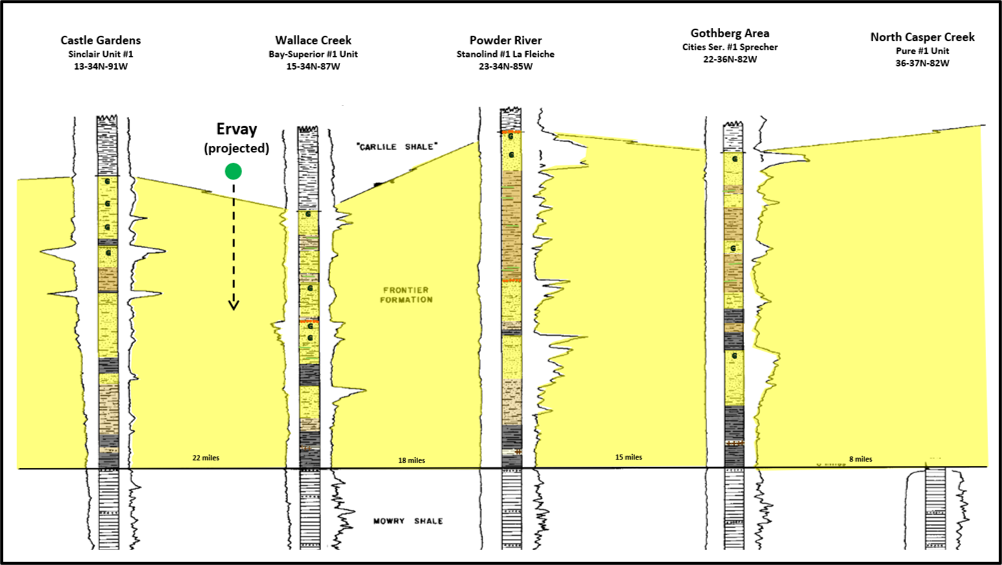 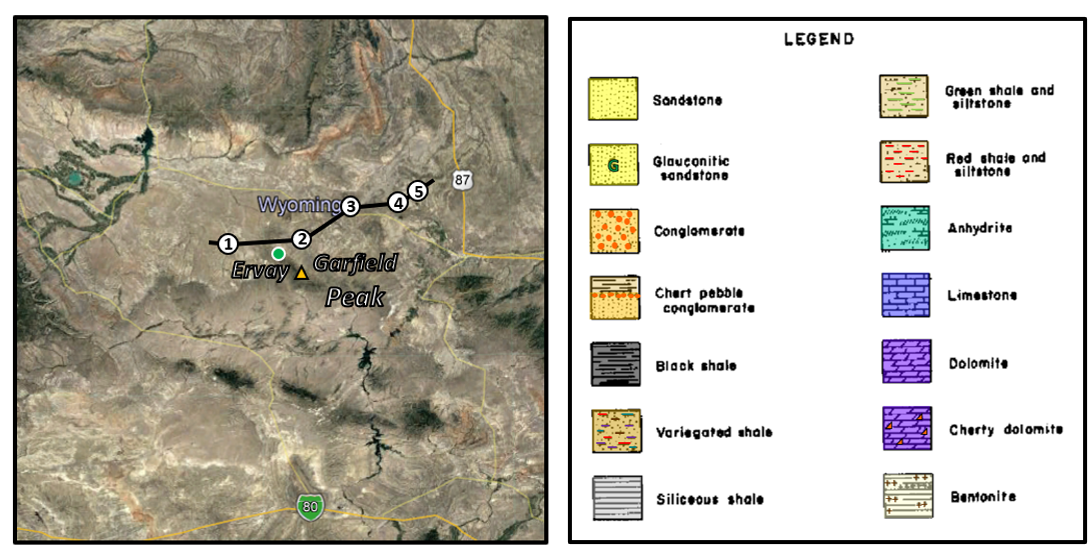 Dr. Wilber Knight, a Wyoming professor and state geologist, discovered the remains of a large Pliosaur in 1895. Pliosaurs were carnivorous marine reptiles with large heads and jaws.  Dr Knight described the site in correspondence to J. E. Ervay: a location “… 10 miles from the Ervay Post Office.” The site lies within the upper Redwater Shale Member, Sundance Formation in Dutton Basin. Dutton Basin is another breached anticline to the west of Ervay Basin. The Redwater Shale member lithology at the excavation consists of glauconitic fine sandstone deposited in a high energy environment. 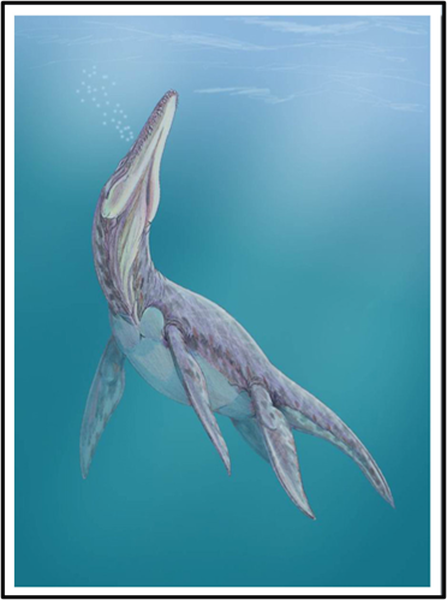 Paleogeographic reconstructions of continents and seas throughout the Late Jurassic Period showing approximate locations of the type occurrence of Megalneusaurus in the Sundance Formation of Wyoming (gold star) and the reported occurrence in the Naknek Formation of Alaska (red star).
Image: After http://www.sepmstrata.org/page.aspx?pageid=743; Data After: Weems, R.E. and Blodgett, R.B., 1996, The pliosaurid Megelneusaurus: a newly recognized occurrence in the Upper Jurassic Naknek Formation of the Alaska Peninsula: in U.S. Geological Survey Bulletin 2152, p169-176: https://ecos.fws.gov/ServCat/DownloadFile/129372?Reference=85097

​Dr. Horace Thomas, a future Wyoming State Geologist, studied the complex stratigraphic correlation and relationship of the Triassic and Permian rocks in the southcentral Wind River Basin. He named the upper carbonate tongue of the Permian the Ervay after the nearby post office. The type area is at an outcrop on the flank of Garfield Peak, Rattlesnake Hills. 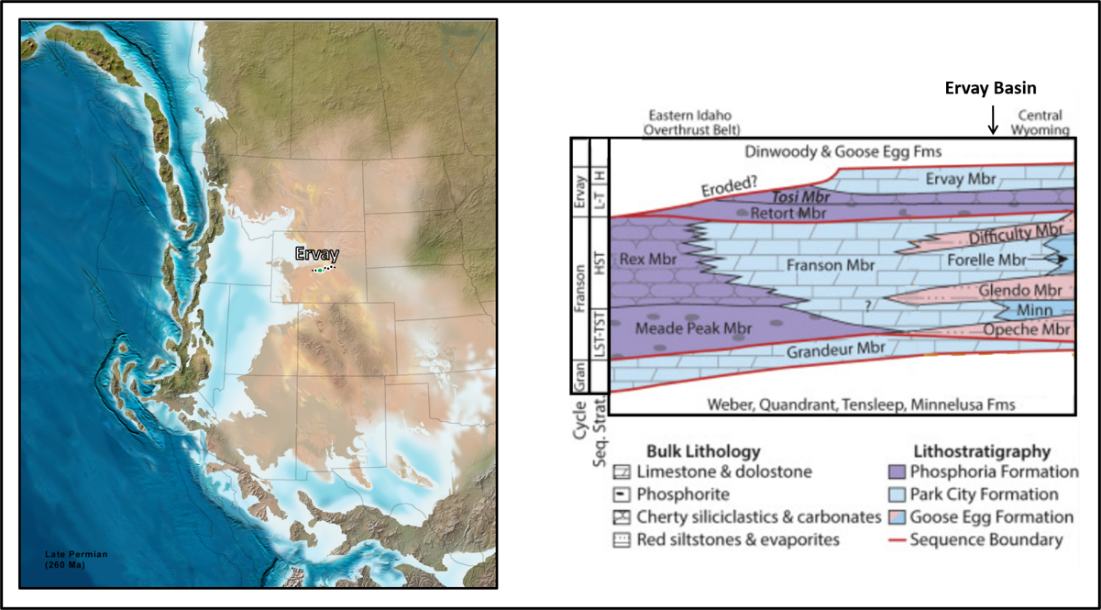 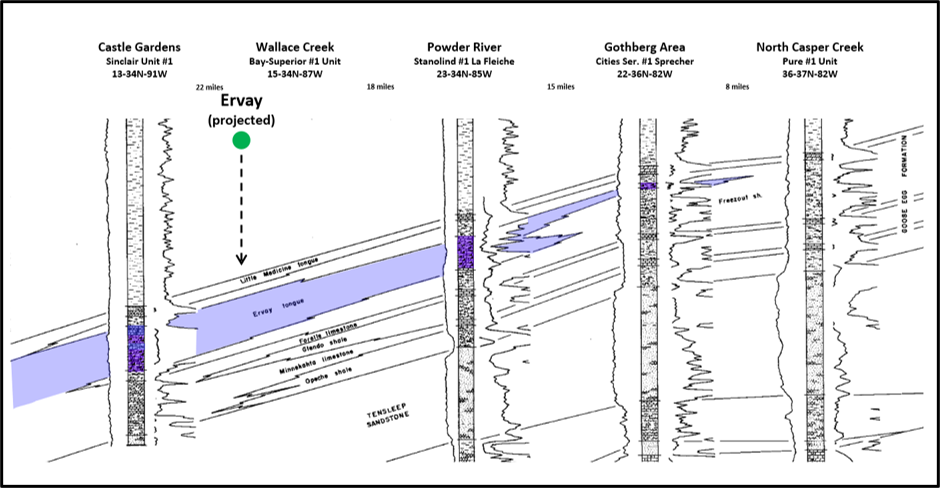 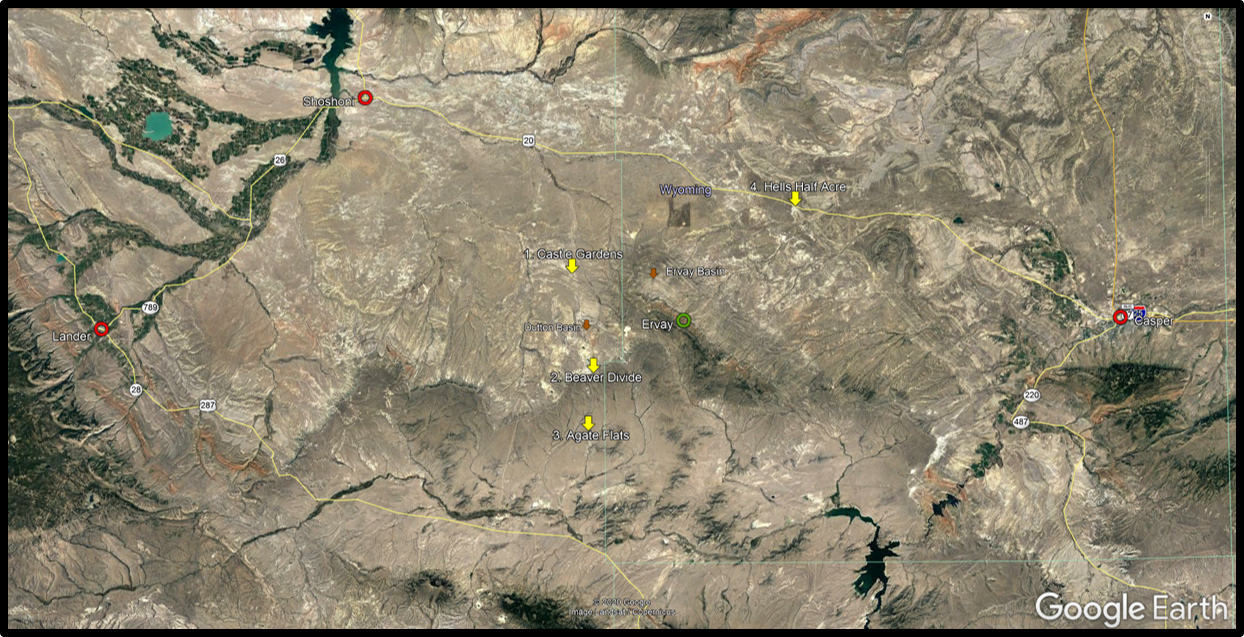