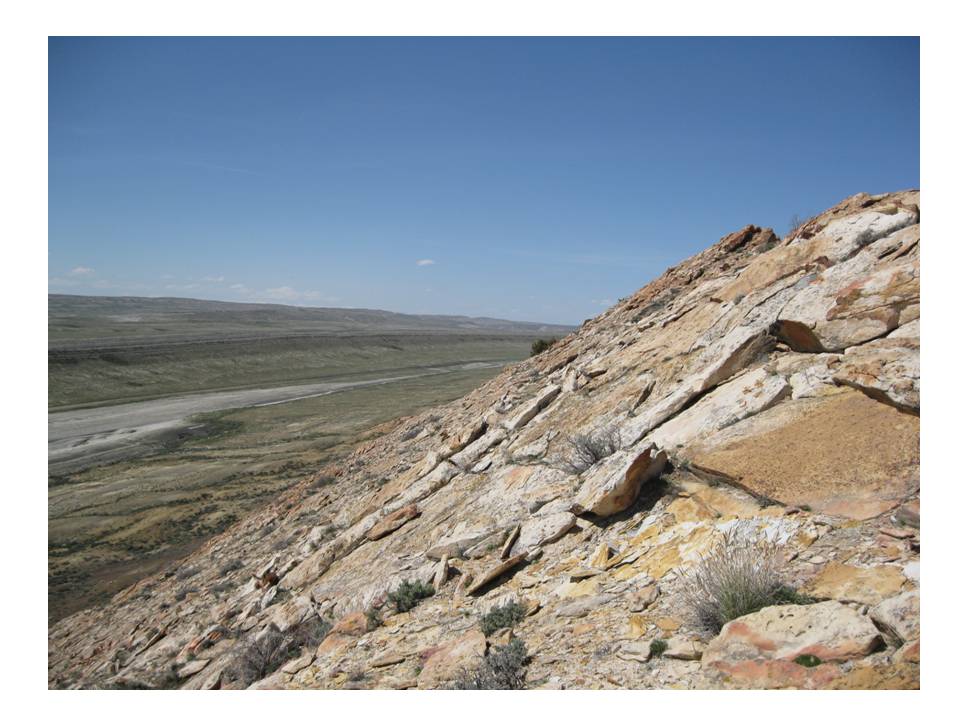 ​Outstanding example of an ancient river channel on the west flank of a large geologic fold called Sheep Mountain Anticline.  The resistant Greybull channel sandstone pops up suddenly from a barren landscape.  For a geologist, it is hard to imagine a better exposure of an ancient river channel.  On the trip to the channel there is a location to collect Jurassic oysters called Gryphaea or "devil's toenail".  There is an adventurous 4WD side trip to an abandoned gypsum quarry and to the canyon cut through Sheep Mountain Anticline by the Bighorn River.

Travelling on a gravel road along the northwest flank of Sheep Mountain Anticline one can see the colorful Mesozoic rocks exposed on this exhumed structure. Grey, green, red, white, black and brown bands reveal the geologic layering of the stratigraphic units. Just like a slice of onion, the oldest layers are near the core. The regularity of the rock layers is suddenly broken by a sandstone body rising out of the eroded claystones of the Cretaceous Cloverly Formation much like a whale breaking at the ocean surface. 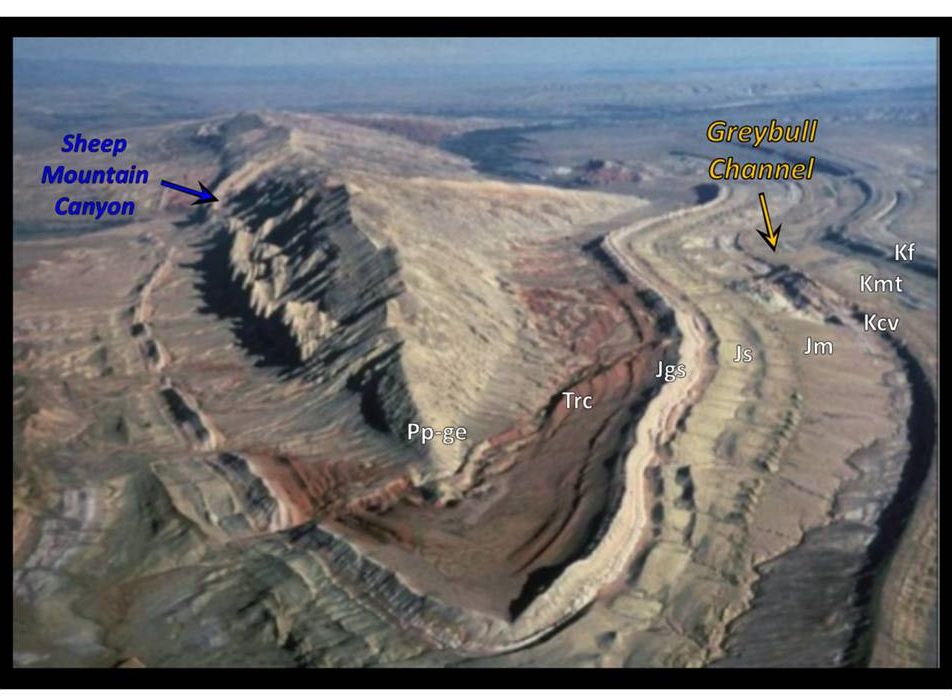 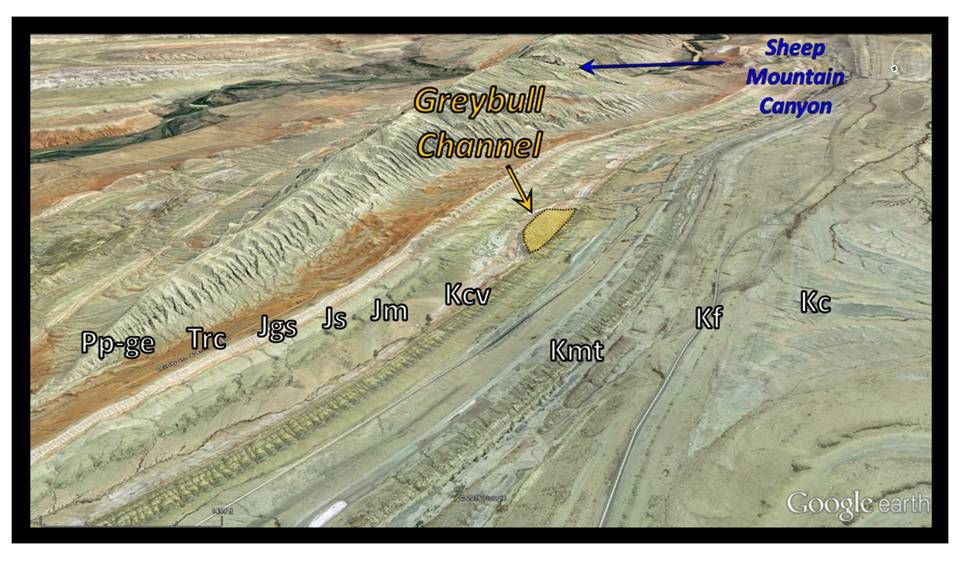 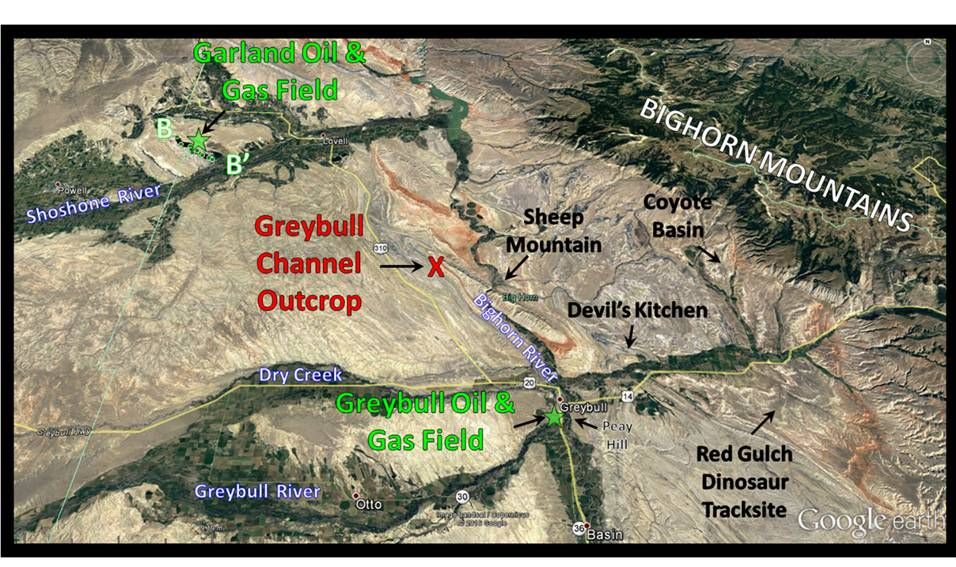 North aerial view of the Greybull channel outcrop at Sheep Mountain. Other Big Horn County geologic sites are posted. The first two oil and gas fields in the Bighorn Basin, Garland and Greybull, are shown by green stars. Location of a portion of Garland Field cross-section BB’ is also indicated.
Google Earth Image
Erosional valleys formed during the Upper Cloverly were filled with sands called the Greybull that were derived from highlands to the east. The Proterozoic Sioux Quartzite from the state line area of South Dakota and Minnesota is the probable source of these sands. The valleys formed at a time of low sea level that caused reinvigorated erosion down into the middle Cloverly floodplain. The Greybull sands of the Upper Cloverly were deposited by streams flowing westward in these valleys across the Bighorn and Powder River Basin. The first incursion of the Cretaceous Seaway began to the north and northwest of Wyoming during deposition of the Upper Cloverly members.  Estuarine deposits developed during these sea level rises. In this area, the estuary shales and silts overlap the valley fill sandstones (see cross section BB’). The source for the sediment of the earlier nonmarine Lower and Middle Cloverly units was the Sevier highlands at the western margin of the depositional basin.  Positive movement of the Sioux Uplift, aka the Transcontinental Arch, in southeastern South Dakota began about 110 million years ago. This reoriented the paleo-dip along the eastern edge of the depositional basin and provided the eastern sediment source for the Greybull sand. 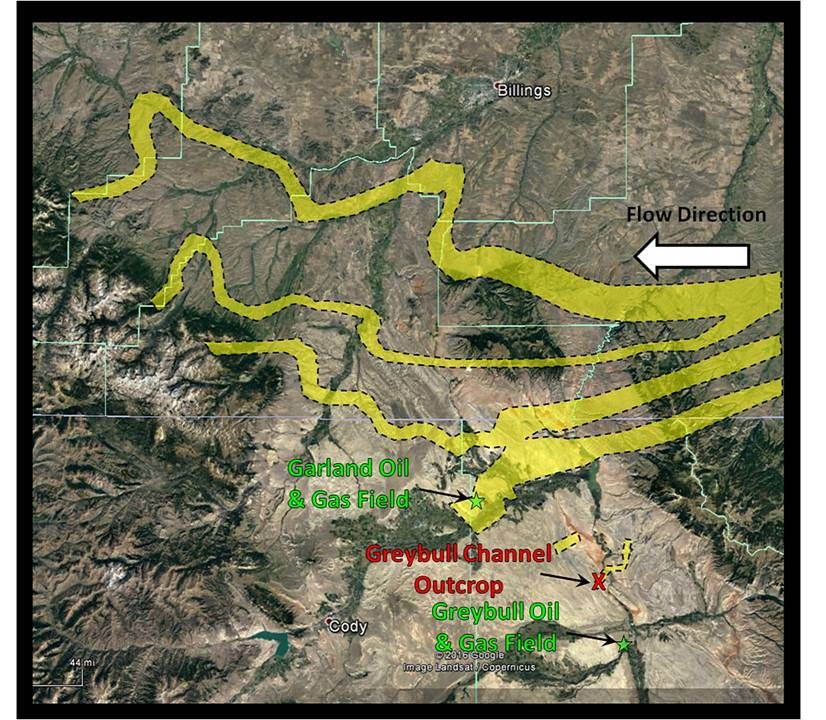 Reconstruction of a portion of the Greybull channel system developed during upper Cloverly deposition. Note that the channel seen at this location on the west side of Sheep Mountain continues to the east.  Similar thick channels are present on the east side of Sheep Mountain.
Images: Google Earth Image, Channels: After Mitchell, J.R., 2014, Mosser Dome Field, Yellowstone County, Montana: A Giant Stratigraphic Oil Accumulation: AAPG Search and Discovery Article #20268, Slide #8. http://www.searchanddiscovery.com/documents/2014/20268mitchell/ndx_mitchell.pdf 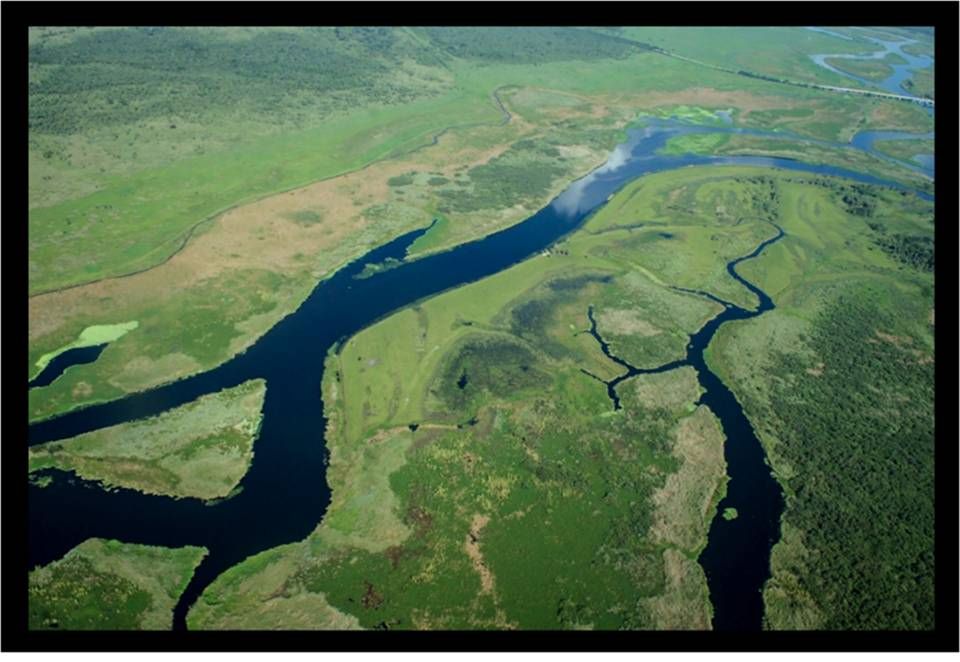 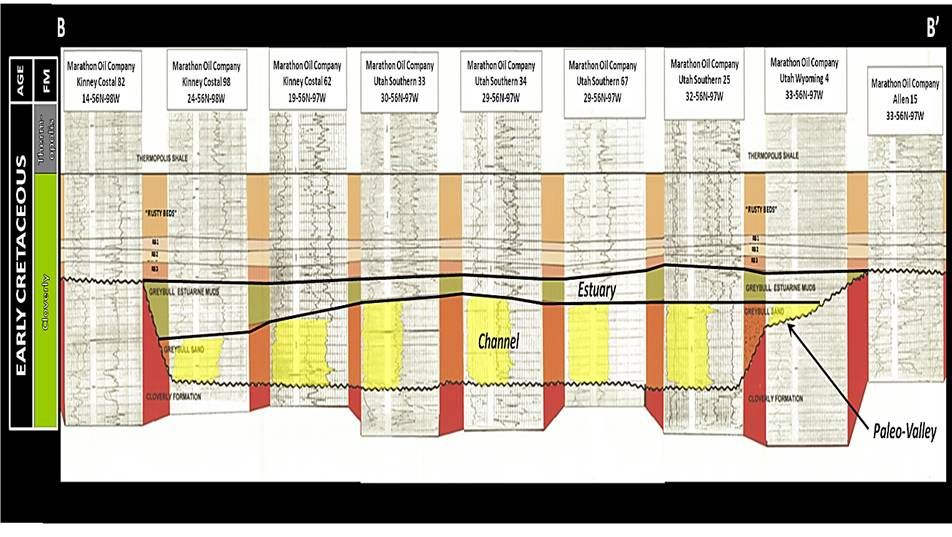 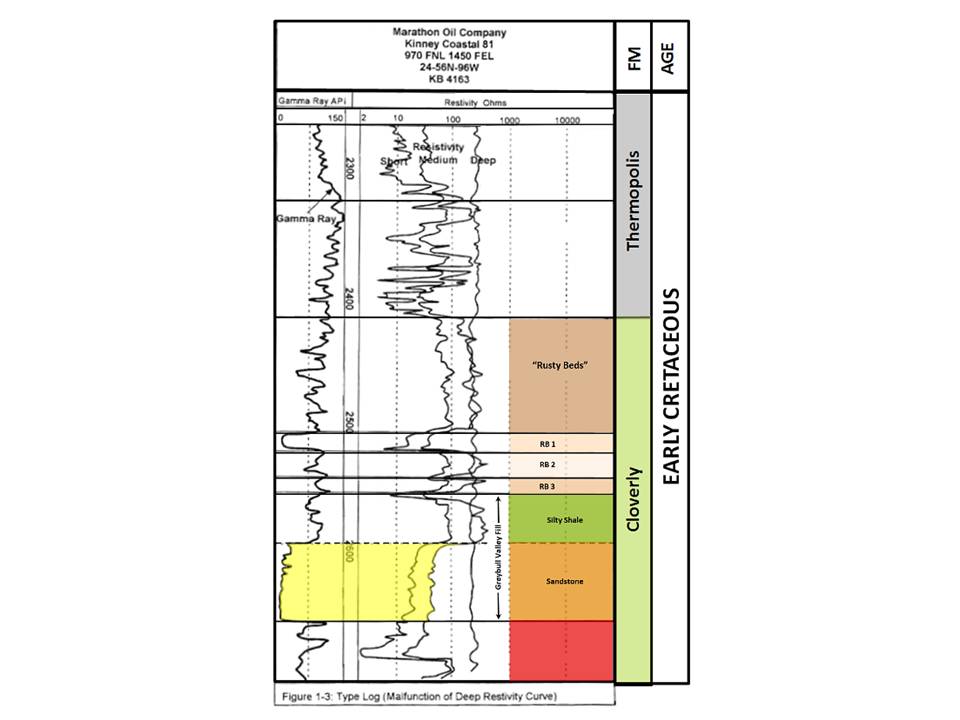 Type log of Greybull Sandstone Member of the upper part of the Cloverly Formation, same color scheme as previous cross section.
Modified after Minielly, G.P., 1997, Surface and Subsurface Study of the Greybull Sandstone, an Incised Valley Fill, and the Sykes Mountain Formation, Bighorn Basin, Wyoming: Fig. 1.3, p. 7.
https://shareok.org/handle/11244/12053
The name, “Greybull Sandstone,” was originally applied to a gas sand reservoir in the Greybull field discovered in 1907 at a depth of 800 feet. The discovery well maintained a 50 foot flare for 18 to 24 months at an estimated flow rate of 6-10 million cubic feet of gas per day. The estimated cumulative gas vented into the atmosphere is from 3.3 to 7.3 billion cubic feet. The field is located at the junction of the Greybull and Bighorn Rivers just west of Peay Hill, southeast of Greybull, Wyoming. To date, all hydrocarbon production in the Greybull Sandstone in the basin has been from a combination of valley sandstones crossing structural noses (Greybull, Garland, South Elk Basin, etc.). There is a hypothetical stratigraphic trap play in the Bighorn Basin that is estimated to hold an average volume of 1 million barrels of oil equivalent per trap. A change from permeable sandstone to impermeable mudstone & claystone is the barrier to up-dip migration of hydrocarbons that creates this stratigraphic accumulation of oil and gas. A few of these traps could hold 5-10 times that volume. 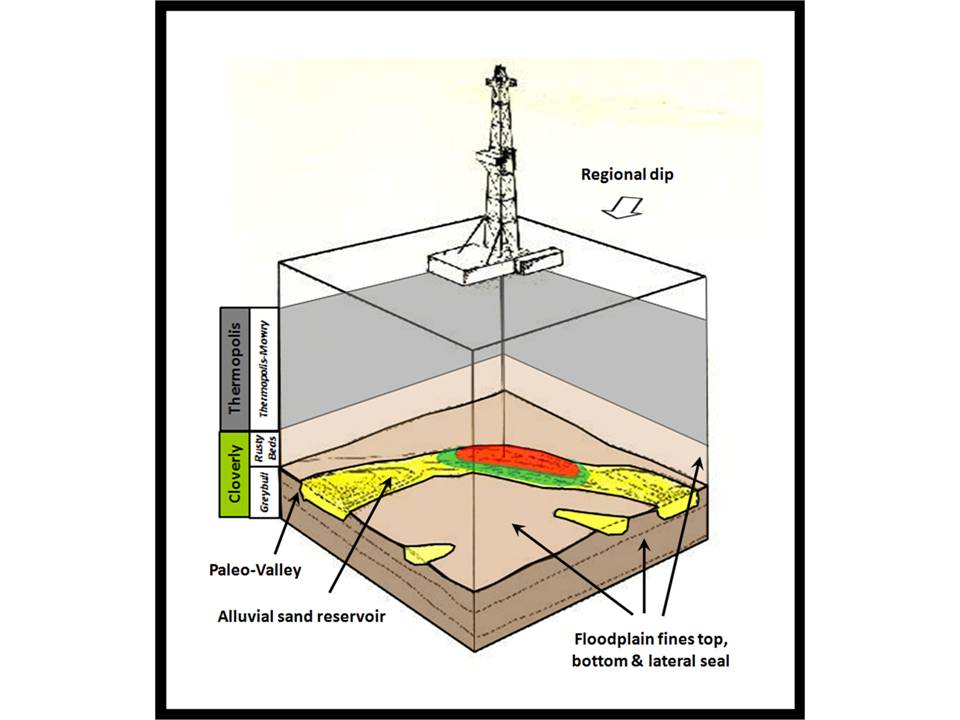 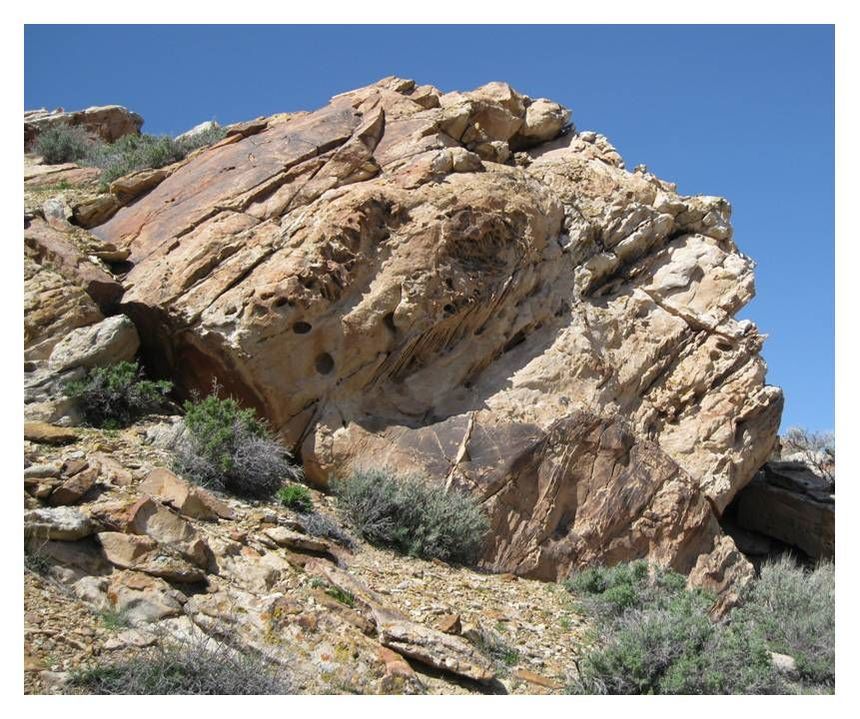 Fluvial outcrop of Lower Cretaceous Greybull Sandstone at Sheep Mountain Anticline.  Major bed boundaries are dipping to lower left at the structural dip of the outcrop.
Image by Mark Fisher

The Sheep Mountain Anticline is a fold generated during the Laramide mountain building event from 70 to 50 million years ago. The large fold seen in the sedimentary rocks at Sheep Mountain was created by crystalline basement rock uplifted along faults that parallel the long axis of the structure along the steeper east flank.  The faults and associated fold both trend in a northwest to southeast direction for about 15 miles.​ 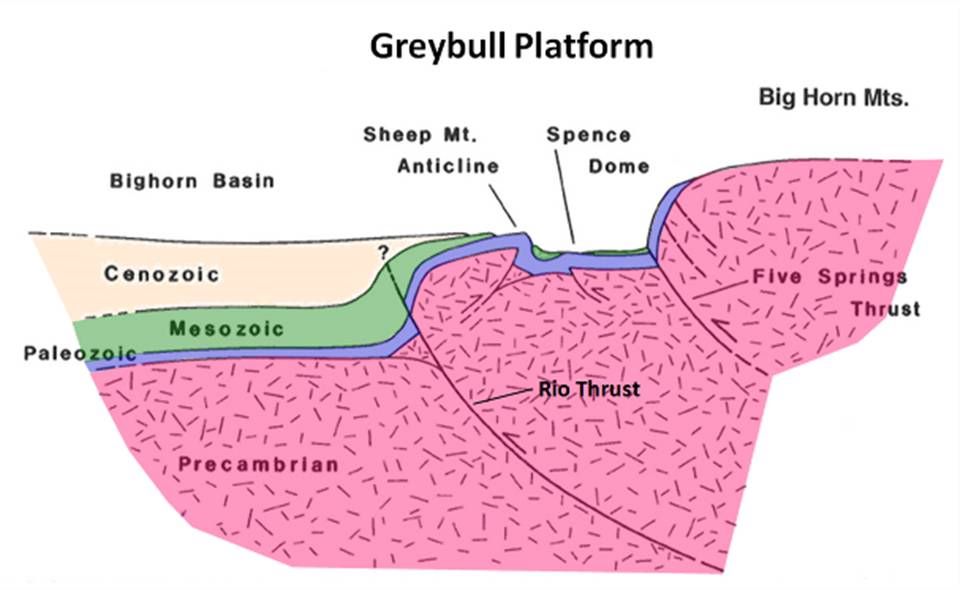 What you will see at Greybull Channel & Sheep Mountain

What is amazing about this outcrop is you go from no river channel to thick river channel sandstones to no river channel over a lateral distance of only one-third mile. This outcrop smacks you in the face and screams, I was an ancient river that drained a mysterious highland from the east that no human has ever seen. I carried gravel, sand, silt, clay and the occasional tree or dead dinosaur to the Cretaceous Seaway. Well, that is what this outcrop said to me. Other days, it says I am a perfect reservoir for stratigraphic trapping of oil and gas in the subsurface because of the good porosity in the sandstone and the rapid change to tight shales that would prevent the hydrocarbons from escaping updip. Or it says I would make a great aquifer for a water well in this desolate setting if you drilled just downdip (west) of this outcrop where the channel sand is below the water table.This outcrop also has a nice set of conjugate fractures observable on the top surface. To a geologist, there is something magical about an ancient river channel.

An additional fun stop is to collect oyster fossils called Gryphaea, that thrived in the waters of the Jurassic during deposition of the Sundance Formation (Wikipedia link to Gryphaea).​​
Left: Fossil oysters called Gryphaea or "devil's toenails"
Right: Slope with Gryphaea below ridge of thin bedded Sundance sandstone
​Images by Mark Fisher 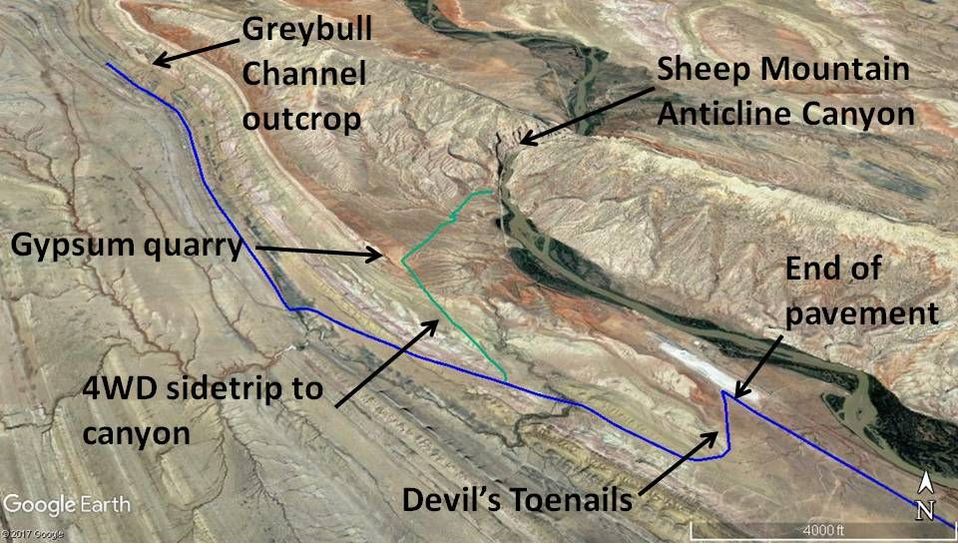 Map to Greybull Channel outcrop, devil's toenail collecting site, 4WD sidetrip to abandoned gypsum mine and Sheep Mountain Anticline Canyon
Image by Google Earth
Just a 15 minute drive from Greybull, the channel is accessible with a passenger car.  However, the unpaved portion is not recommended when wet because of bentonite clay. You will regret it if you drive this road when wet. Starting at the only traffic light in downtown Greybull at the intersection of US 14 and US 16-20, head west on US 14-16-20 toward Cody and Lovell, 1.7 miles turn right on Bighorn County R26, straight ahead is view of Sheep Mountain Anticline, 2.4 miles sandstone cliff on left is Cretaceous Frontier Sandstone, 2.6 miles bentonite plant on right which is “the clay of 1,000 uses” but mostly used for drilling mud and kitty litter http://www.wsgs.wyo.gov/products/wsgs-2014-bentonite-summary.pdf , 5.0 miles red cliffs on right past the trees next to the river are Triassic Chugwater shales and siltstones, 5.7 miles massive dip slope off of Sheep Mountain Anticline to right are resistant Paleozoic rocks, the soft Triassic Chugwater shales have been removed by erosion, the surface of the dip slope is Permian Phosphoria and the ravines have cut down into the Pennsylvanian Tensleep Sandstone and Pennsylvanian Amsden shales and carbonates, 7.7 miles bentonite plant on right and straight ahead, 7.8 miles turn left onto unpaved road, 8.0 miles just before dirt road curves to right there is a low ridge of thin bedded Sundance sandstone on the right, the gentle slope between the road and this ridge is a good place to find fossil oysters called Gryphaea or "devil's toenails", 9.1 miles view on right of canyon where the Bighorn River cuts through the Sheep Mountain Anticline (Geowyo Buffalo Bill Dam page has a section on superposed rivers and a picture of the canyon through Sheep Mountain), the cliffs in the canyon are Mississippian Madison, 9.9 miles turn right on dirt road immediately after crossing drainage and pond,  straight ahead in distance is the knob of Greybull Channel where you are headed, road is on Cretaceous Mowry Shale with ridge of Mowry Shale on left and Thermopolis Shale on right, 13.2 miles park on road and walk to Greybull Channel Sandstone ridge on right about 1,000 feet from road. The north side of the outcrop has better exposure of the channel sandstone than the south end. You can walk the entire ridge and be back to the vehicle in about an hour and traverse about 1.3 miles.

Side trip to gypsum quarry and canyon cut through Sheep Mountain by Bighorn River: On the trip to see the channel, turn right on a two-track/dirt road at 8.9 miles, which is about a quarter mile after you cross a drainage. This is a 4WD high clearance dirt track that you must determine is safe for you and your vehicle. Along this road are washouts, drop-offs, drainage crossings and ravines that are potentially dangerous. Over the years, people have blazed alternate paths to get around obstacles, thus we can't give detailed directions. It is roughly one mile in a straight northwest direction to the gypsum quarry. The gypsum is the white soft mineral in beds of the basal Jurassic Gypsum Spring Formation immediately above the thick red shales of the Chugwater. Gypsum is used to make wallboard at plants in Cody and Lovell. From the gypsum quarry, it is roughly one mile to the north-northeast to the canyon. It is mostly BLM land, but once you reach the river and canyon, the railroad controls the right-of-way and they do not allow people to walk along their tracks because of safety concerns. From the numerous rocks on the tracks, it is obvious there is a falling rock hazard in addition to the hazard from all the trains that come through. There are great views of the Sheep Mountain Anticline and outcrops of the Phosphoria, Tensleep, Amsden, Darwin and Madison. We suspect that well over a 1,000 geologists have been to this spot over the last 100 years to soak it in.  This anticline or fold is identical in most ways to the geologic structures that produce oil and gas in the subsurface of the Bighorn Basin. For petroleum geologists and engineers, it is like taking a stroll through one of their oil and gas fields. Based on all the trash, it has been a popular spot to shoot bottles and drink alcohol. Perhaps if each visitor would pick up a little trash, it would eventually be restored.​​