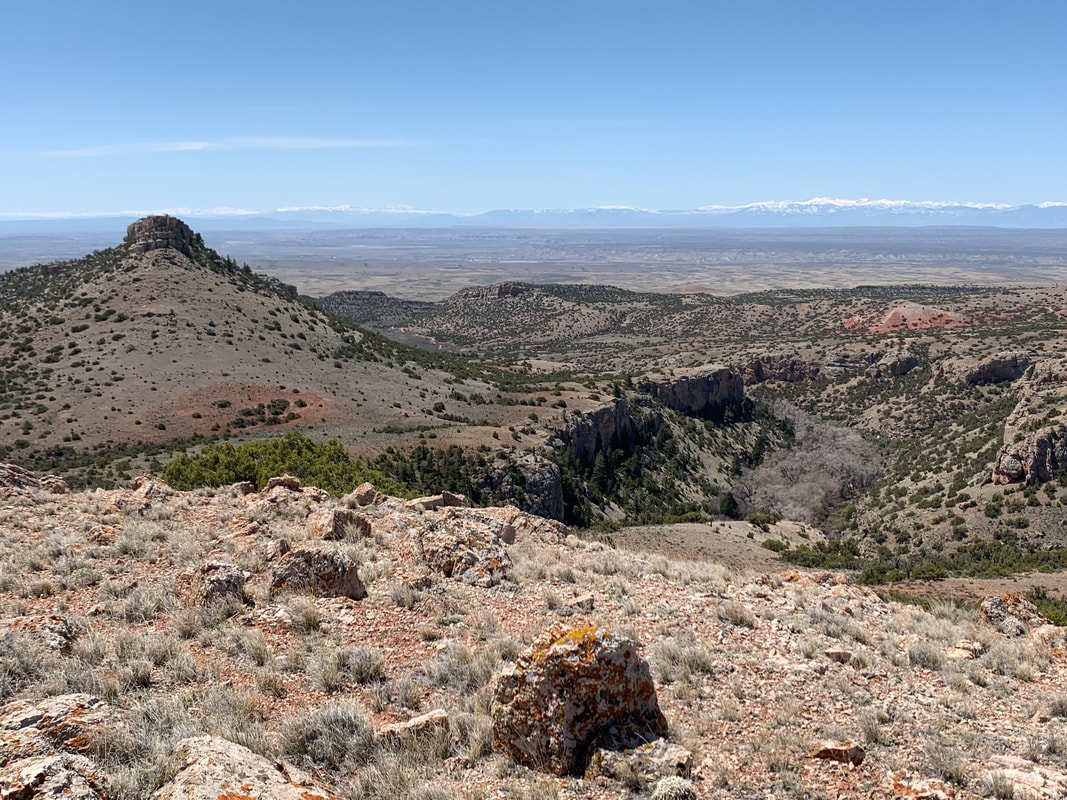 Erosion has carved rugged canyons, ravines and caves in uplifted Madison carbonate rocks. Major faulting along the north and east sides of the mountain blocks results in steep flanks. Minimal faulting to the west and south results in gentle dip into the Bighorn Basin. Isolated, mostly dry mountains with wide open vistas. South half of range is National Forest/BLM with public access. North half of range is Crow Indian Reservation.

July 1806, 1st Sergeant Nathaniel Hale Pryor of Lewis and Clark’s Corps of Discovery was in command of a squad herding horses bought from the Nez Perce for trade at a Mandan village. A band of Crow Indians took all 65 horses in two stealthy nighttime raids in the Yellowstone River valley. The squad unsuccessfully attempted to apprehend the Indians and recover the herd near a mountainous area just north of the Wyoming border. Today that area bears the sergeant’s name, Pryor Mountains. 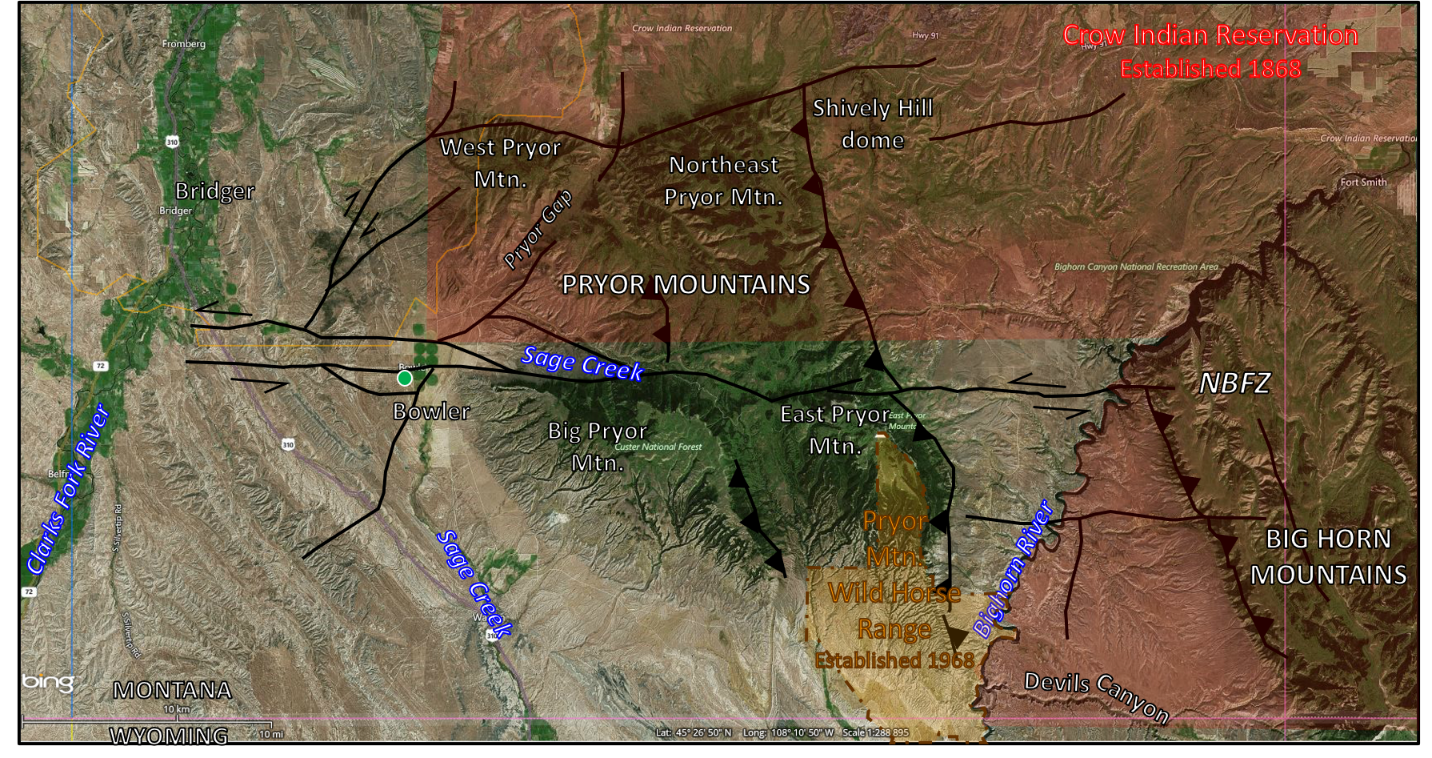 Pryor Mountains, South Central Montana.  The five blocks of the range are labeled. Faults: Reverse - sawteeth on upthrown side, Lateral - main direction shown by arrows, NBFW- Nye Bowler fault zone.  Towns: Active (red) & abandoned (green).
Image: Google Earth
The Crow people are a nomadic Plains Indian tribe that migrated into the Yellowstone River valley and Pryor Mountain region by the late 17th century. They adopted the horse culture about the same time.  They called the mountains “Hitting Rock Mountains” (Baahpuuo Isawaxaawu) for the abundance of chert and flint that they used for projectile points and tools. The U.S. government recognized their land in the first Laramie Treaty of 1851. The tribe’s relationship with the government was more favorable than most other tribes and many Crow braves volunteered as U.S. Army scouts during the Sioux Wars (1854-1890). 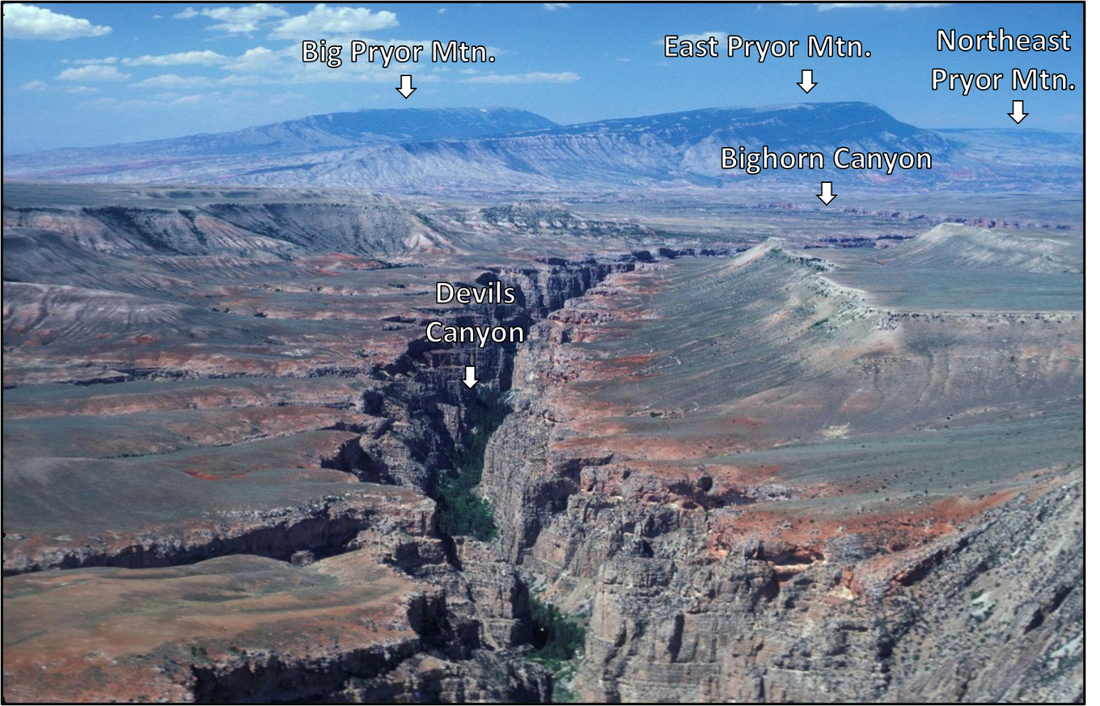 Northwest view of Pryor Mountains from Devils Canyon
Image: Walton, D., 2020, in Regale, R. & G., and Otstot, R, Jan. 23, 2020, Guest view: E-bikes threaten the fragile Pryor Mountains ecosystem: Billings Gazette; https://billingsgazette.com/opinion/columnists/guest-view-e-bikes-threaten-the-fragile-pryor-mountains-ecosystem/article_cffa5b91-773a-59fd-a0d4-267dc5ab40c8.html
​According to Crow legend, a race of aggressive “Little People,” known as Nirumbee inhabited the Pryor Mountains. These mythical beings were about eighteen inches tall, had large heads and pointed teeth. They were friendly with the Crow who respected them and left small gifts for them. Petroglyphs were thought to be evidence of their presence in the mountains long before the Crow arrived. The Pryors were considered sacred to the Crow because Little People lived there.

Geology of the Pryor Mountains 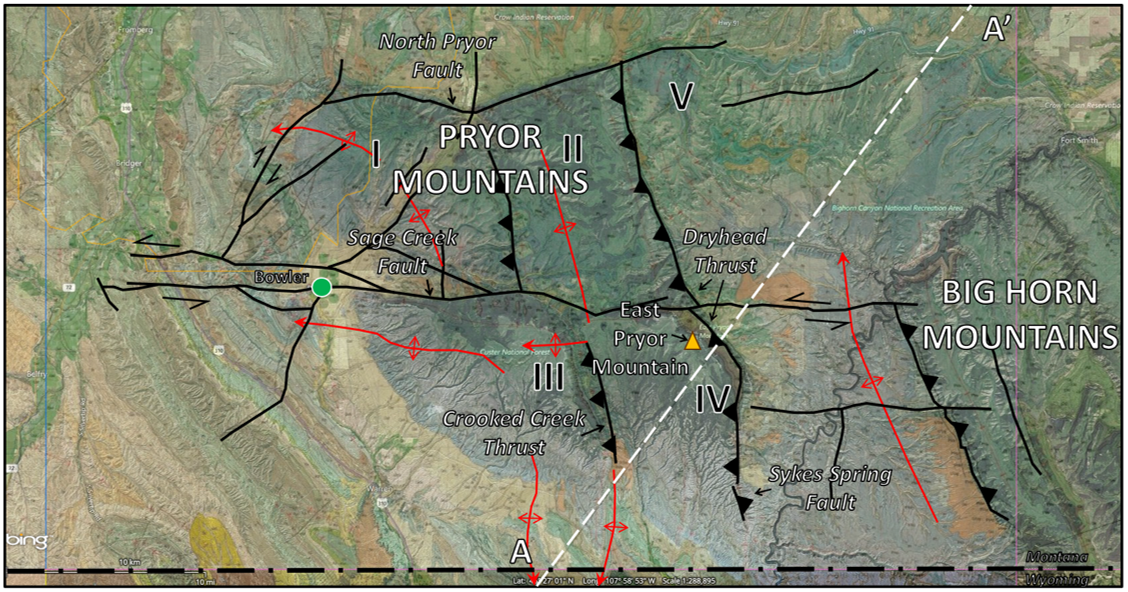 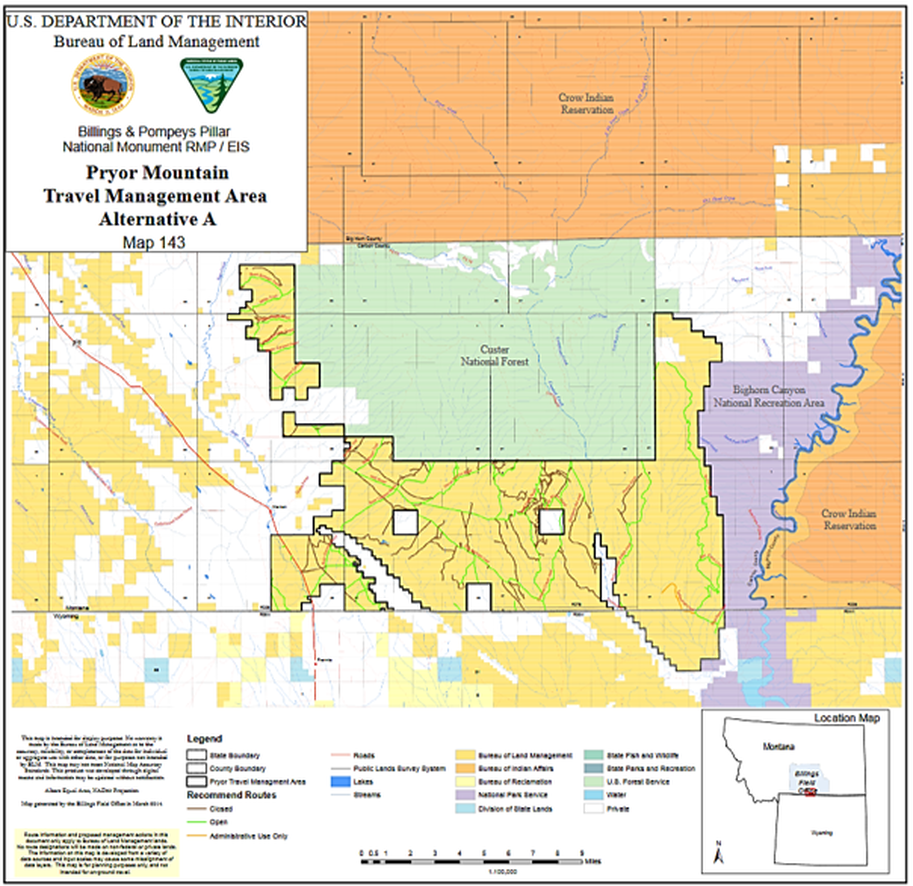 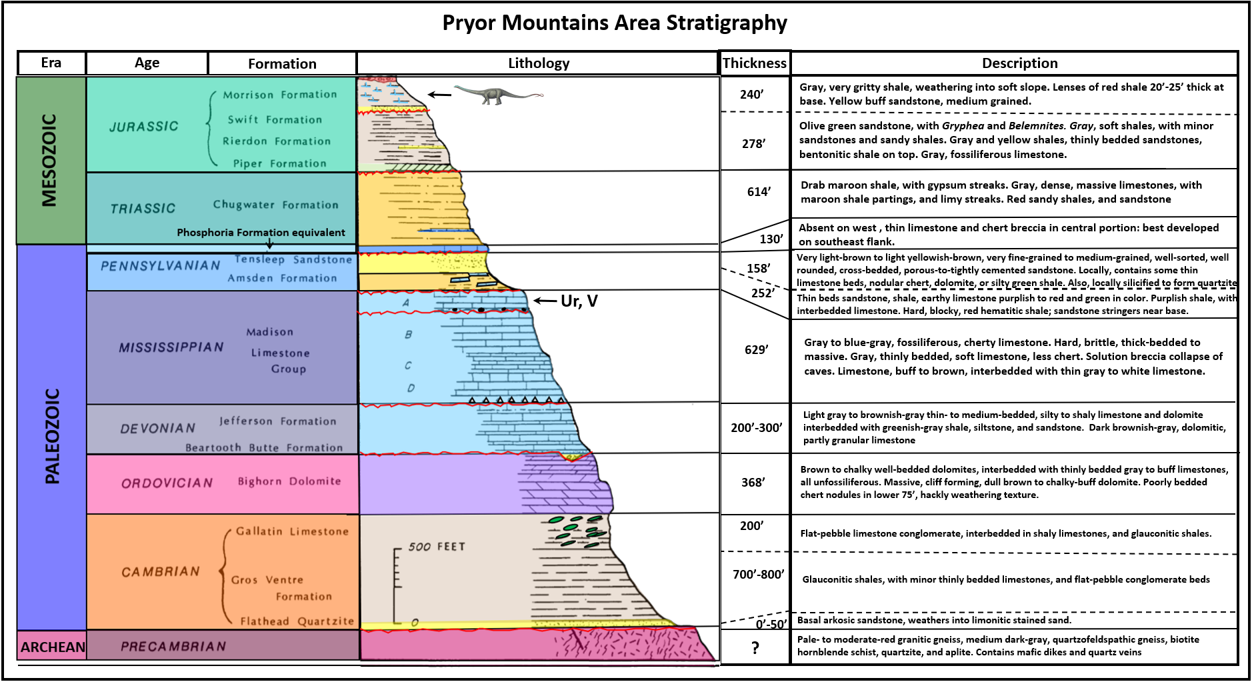 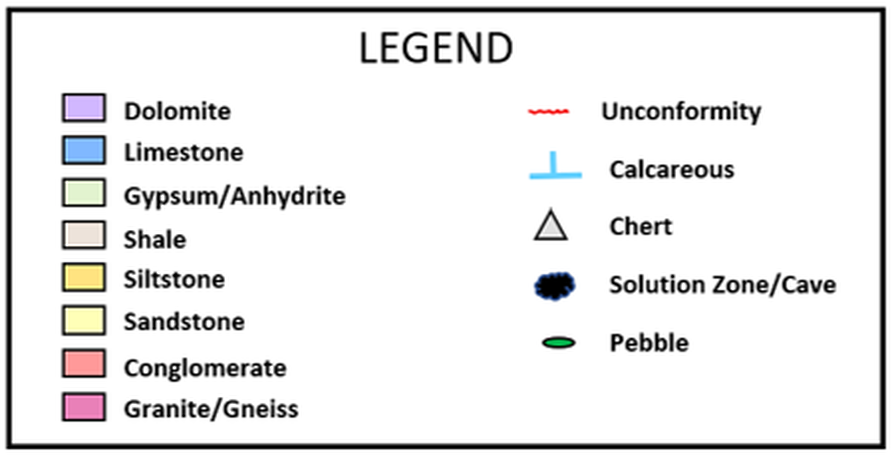 Stratigraphic column of rocks exposed in Pryor Mountains area.
Image: After Van Gosen, B.S., Wilson, A.B., and Hammarstrom, J.M. with a section on Geophysics by Dolores M. Kulik, D.M., 1996, Mineral Resource Assessment of the Custer National Forest in the Pryor Mountains, Carbon County, South-Central Montana: U.S. Geological Survey Open File Report 96-256, Fig. 3, p. 6; https://pubs.usgs.gov/of/1996/0256/report.pdf; and Blackstone, D.L., Jr., 1940, Structure of the Pryor Mountains Montana: The Journal of Geology, Volume 48, Number 6, Table 1, p. 593-595; https://www.jstor.org/stable/30058701?seq=1#metadata_info_tab_content.
​The Pryor Mountain area was a gently warped surface covered by a warm shallow ocean 345 million years ago. Over 600 feet of cherty fossiliferous carbonate rocks of the Madison accumulated on this northern portion of the Wyoming shelf. After the seaway withdrew and before the Amsden transgression, the region was exposed to subaerial erosion for 34 million years. Karst topography and solution collapse developed in the carbonate and evaporite beds. The upper Madison “A” zone (Little Tongue Member) is bounded by regional solution collapse zones and breccia deposits. Today, a series of steep walled canyons are cut in the Madison surface by streams flowing off the blocks. The Madison outcrops are a recharge area for the groundwater aquifer. The Pryors form the drainage divide between the Clarks Fork of the Yellowstone and the Bighorn rivers. Both streams are tributaries of the Yellowstone river. The water and carried sediment eventually reach the Gulf of Mexico via the Missouri and Mississippi drainage complex. 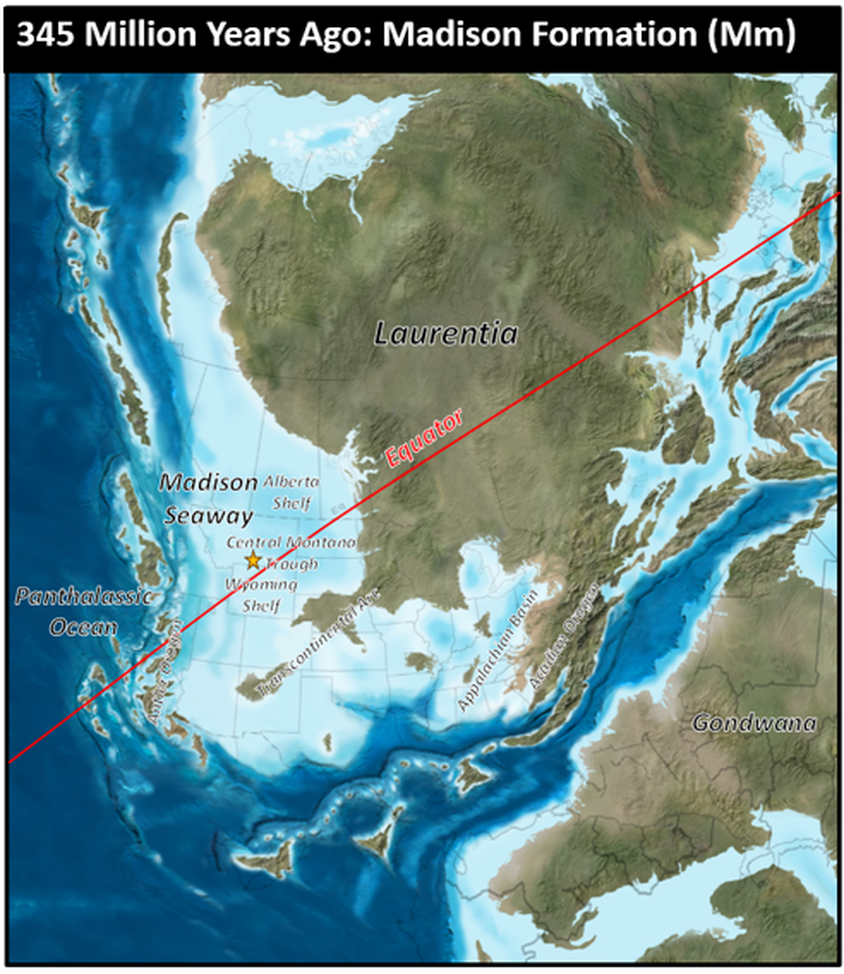 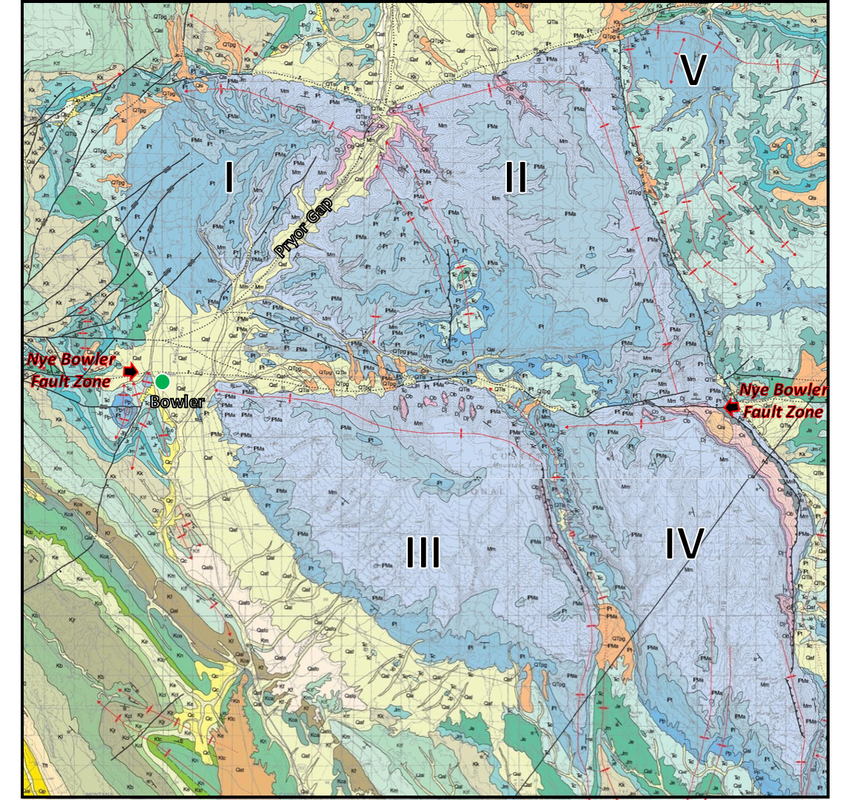 Geologic map of the Pryor Mountains, with blocks numbered. Note large exposure of the Madison (Mm) aquifer in light blue and only a tiny exposure of Precambrian on the northeast corner of Block IV in gray.
Image: After Lopez, D.A., 2000, Geologic map of the Bridger 30'x60' quadrangle, Montana: Montana Bureau of Mines and Geology, Geologic Map GM-58, scale 1:100,000; https://ngmdb.usgs.gov/Prodesc/proddesc_32560.htm. 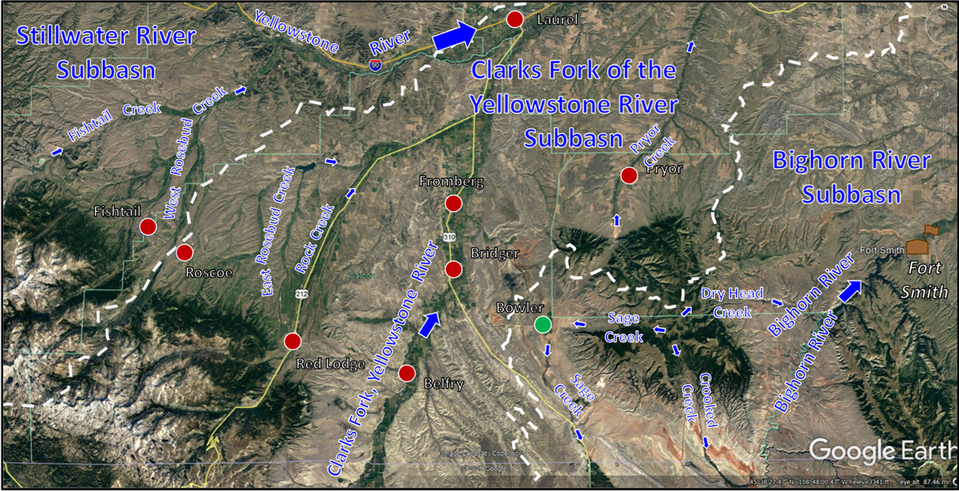 Subbasins of the Yellowstone Basin drainage system in the Pryor Mountain region. Arrows show water flow directions. Dots show towns: red – active; green – abandoned. Dashed white lines are boundaries of drainage subbasins.
Image: Google Earth
​Radioactive uranium and vanadium ore were mined from 1956 to 1970 at several sites in the southern Pryor Mountain and Little Mountain districts (southeast of Pryors). Solution breccias developed from water moving through fractures, joints, and faults, dissolving evaporite beds (“A” zone). Ore concentrated in sediment filled collapse breccia in a 10 to 60-foot zone in the upper 100 to 200 feet of Madison carbonate. The mines are abandoned today, but exposure remains a concern for groundwater and cavers. The BLM reclaimed ten of these sites in 2006. 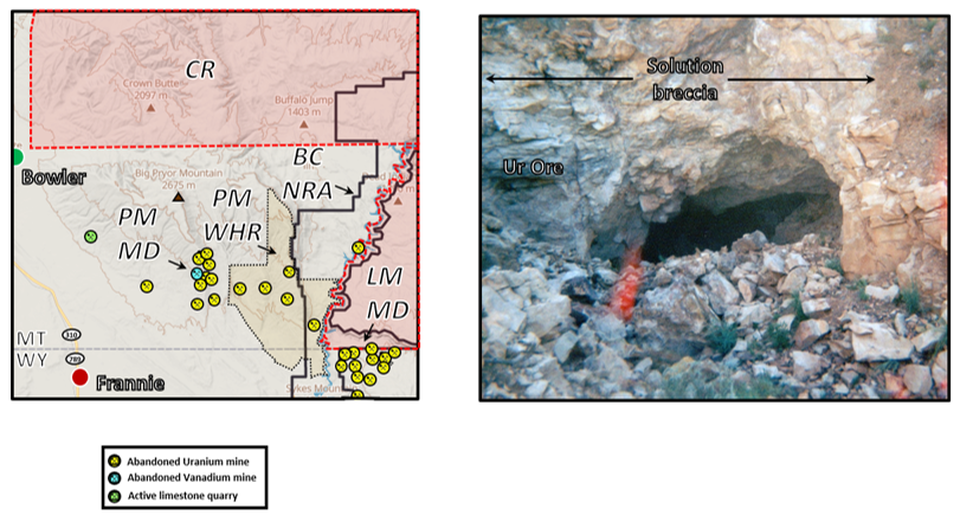 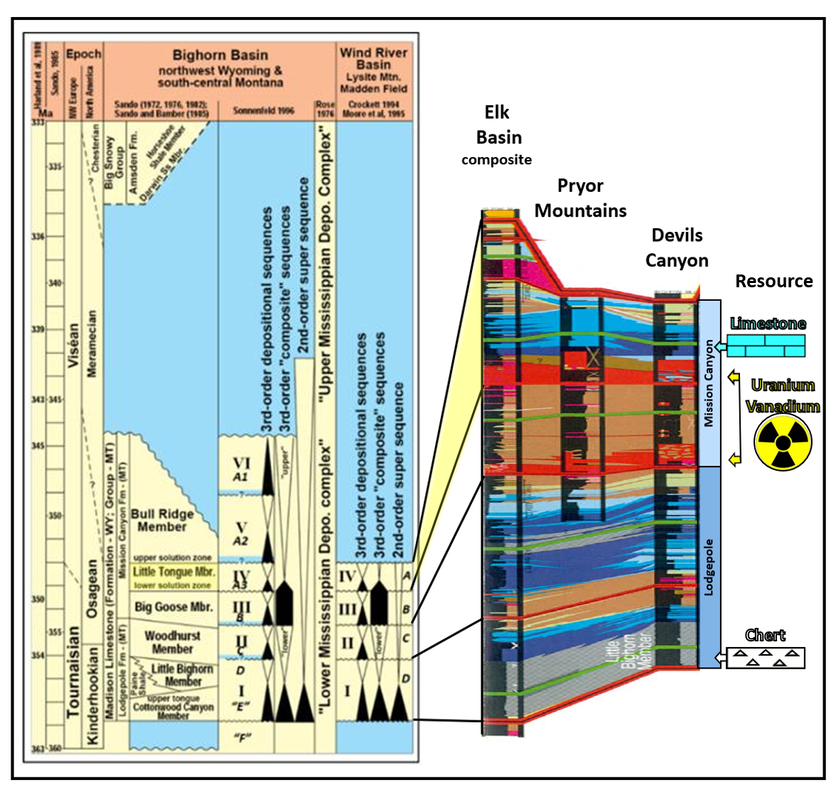 Madison Limestone lithostratigraphic chronology and sequence stratigraphic cross-section of Pryor Mountains area. Uranium and vanadium ore generally occur in solution breccia zones within the Little Tongue member of the Madison Formation (“A” unit). Limestone is quarried from the upper Madison Mission Canyon Beds.
Image: After Eldam, N.S., 2012, Structural Controls on Evaporite Paleokarst Development: Mississippian Madison Formation, Bighorn Canyon Recreation Area, Wyoming and Montana: M.S. Thesis University of Texas, Austin, Figs 1.9-1.10, p. 18-19; https://repositories.lib.utexas.edu/handle/2152/ETD-UT-2012-05-5134.
The Jurassic Morrison Formation (155-148 million years ago) and equivalent units were deposited in a vast basin by streams eroding the western mountains. They signal the start of the Sevier Orogeny of the Cordilleran Thrust Belt. In 1995, dinosaur remains were discovered and named the Mother’s Day site. The quarry has produced numerous bones and some skin from juvenile diplodocus sauropods. The site is about five miles west of Bowler on the west flank of a small subsidiary anticline west of the Pryors. The area lies between Bridger Creek (east and north) and South Fork Creek (west). 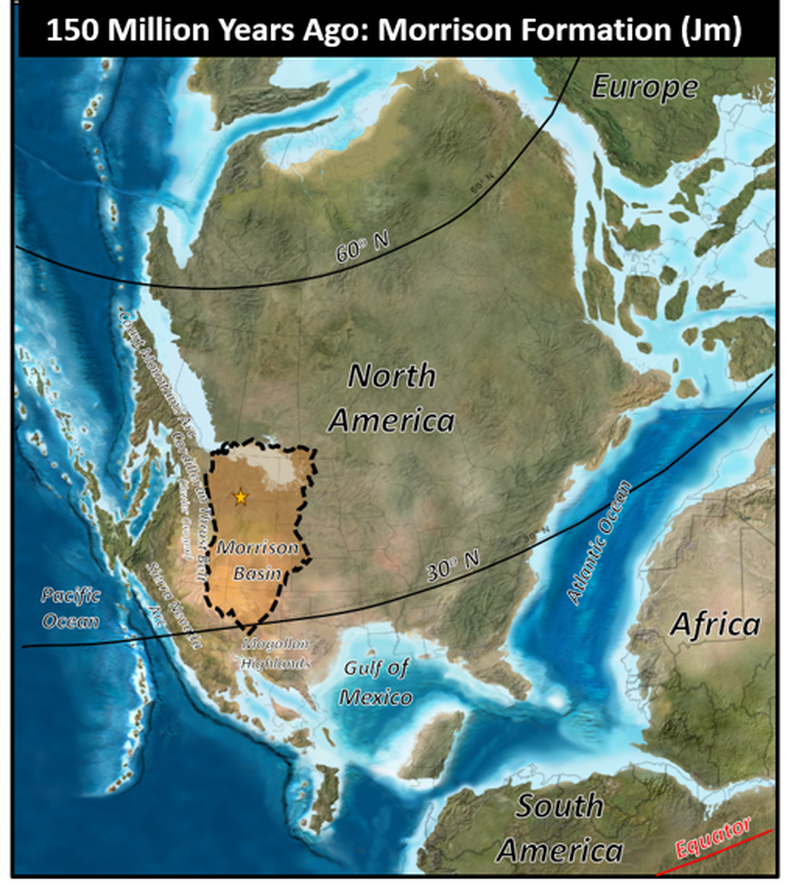 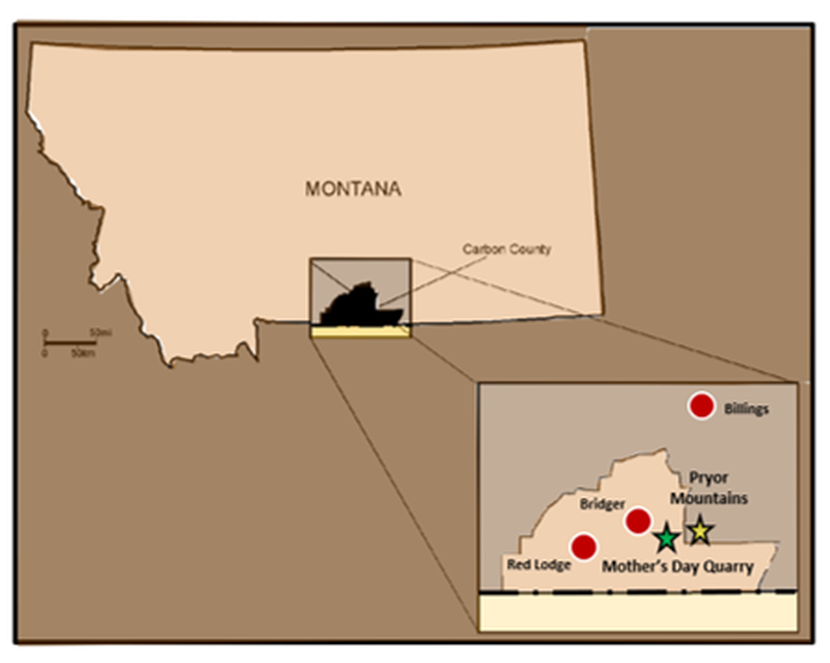 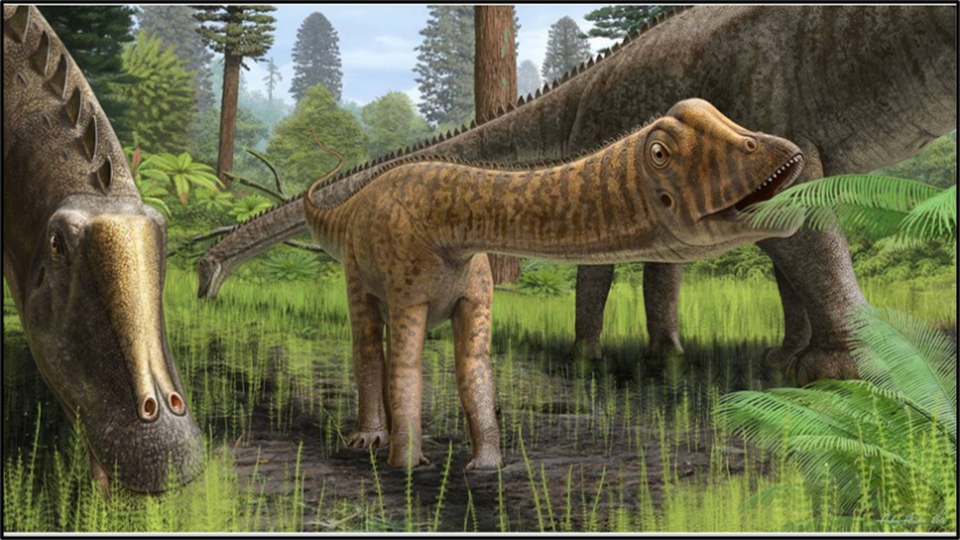 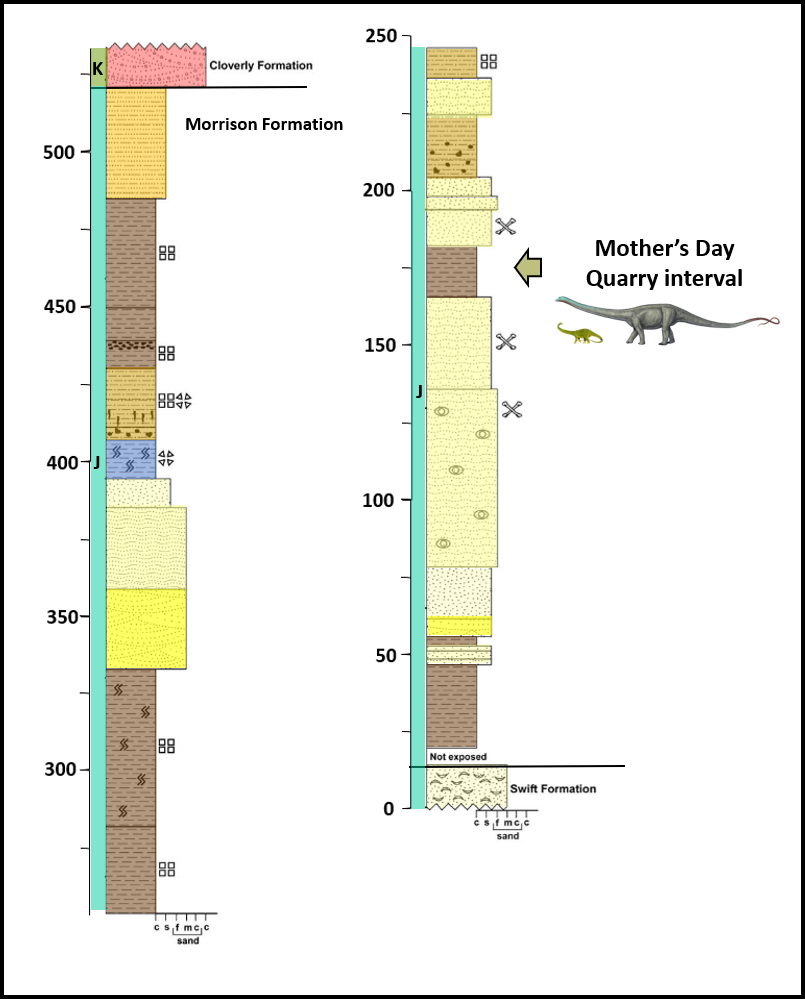 Pryor Mountains habitats.
Image: http://www.pryormountains.org/pryors-coalition/
​Horses had been extinct in North America for about 10,000 years until the Conquistadors reintroduced them. In 1680, during the Pueblo Uprising, many horses escaped or were captured from the Spanish. Genetic studies of the Pryor Mountain wild horses showed they have traits consistent with Spanish horses. The Pryor herds may also include bloodlines from the horses that Sergeant Pryor lost over 200 years ago in the Yellowstone Valley. Many of the Pryor horses have distinctive dorsal stripes on their backs and “zebra” stripes on their legs. 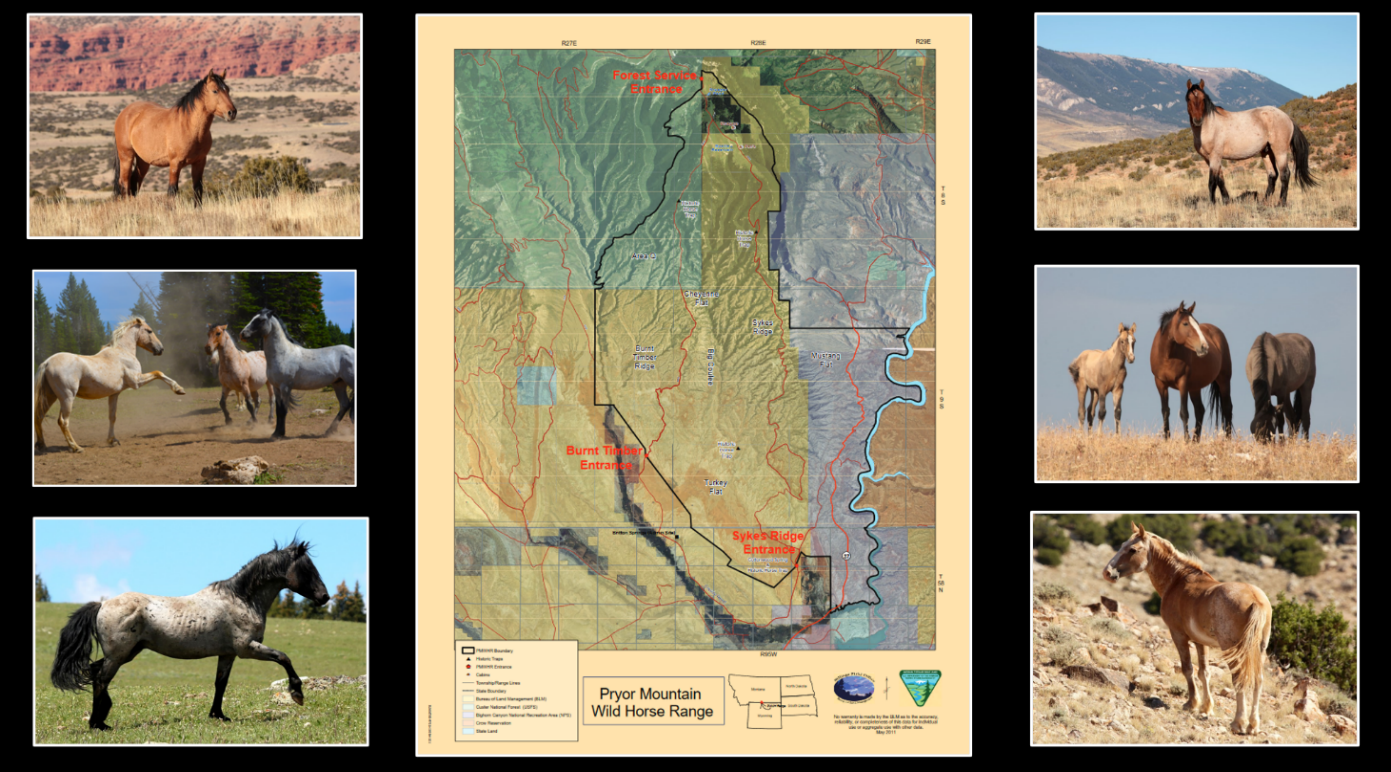 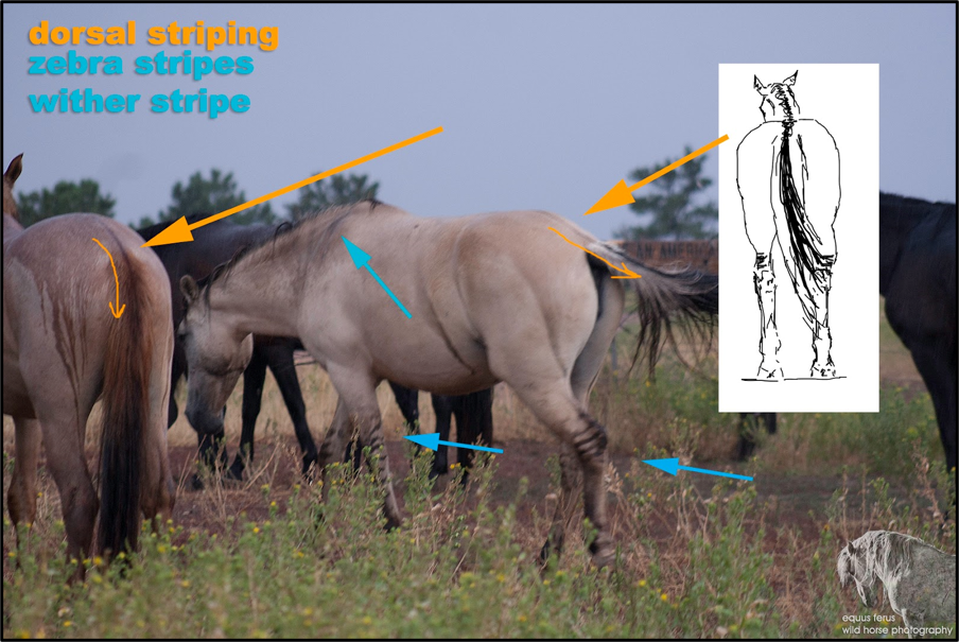 On Big Pryor Mountain and East Pryor Mountain there are numerous places to hike. These mountains also have endless miles of dirt roads making it OHV heaven. The Pryor Mountains website has detailed descriptions and maps of how to get there, hikes, roads, camping, natural history, and cultural history.