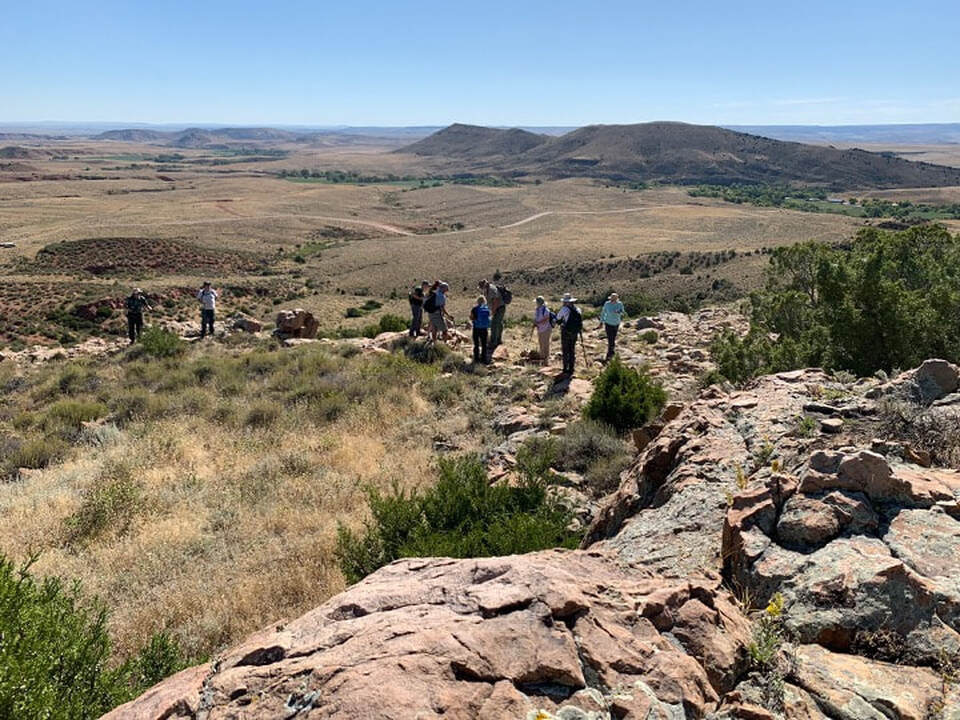 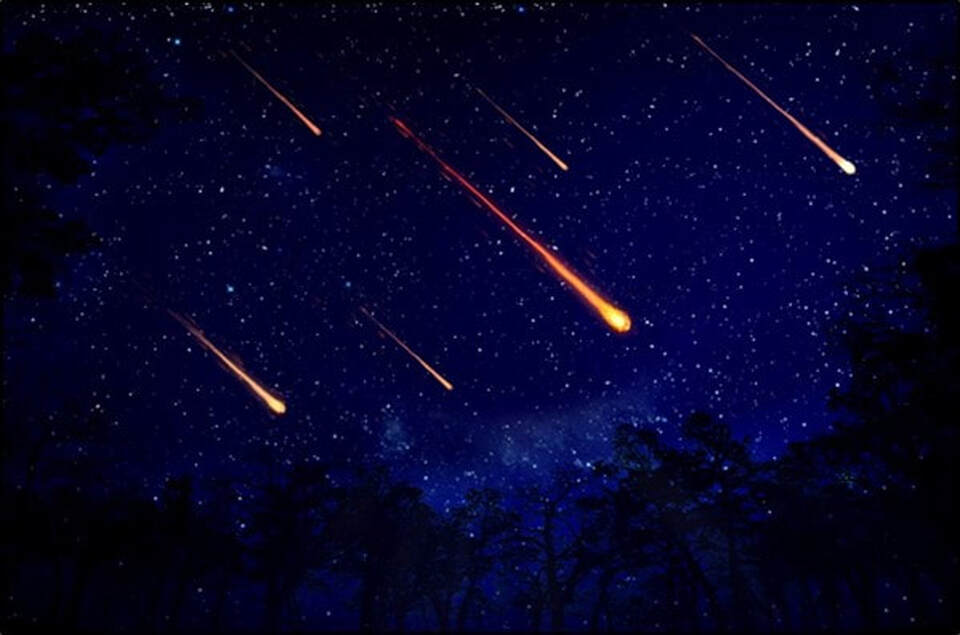 Modern Perseid meteor shower example, 2016.
Image: https://www.nps.gov/cuga/learn/news/shootingstar.htm.
Interplanetary objects have been orbiting in space since the origin of the solar system. Chunks of ice, rock, or metal traveling in outer space are called comets, meteors, or asteroids. Comets are composed of ice and dust, while meteors and asteroids are made of rock, minerals and/or metal.  The latter two objects are differentiated by size, with the smaller being meteors. Asteroids are generally more than ten feet in length (3 m) and orbit around the Sun between Mars and Jupiter.

Collisions are common and impact craters are the result. When any of these celestial objects strike a solid planet or satellite, they gouge a hole into the surface. The size of the crater is related to the mass and velocity of the celestial object and the composition of the impacted crust. Evidence of the bombardment is ubiquitous in our solar system.

The period from 4.6 to about 3.8 billion years ago is called the “Late Heavy Bombardment” due to the large quantity of collisions with material left over from the creation of the planets and moons. The Earth’s moon originated in a 4.5-billion-year-old collision event called “The Big Splat” when a Mars-sized object smashed into proto-Earth, ejecting a lot of material into Earth’s orbit.  That ejected debris condensed into our moon. 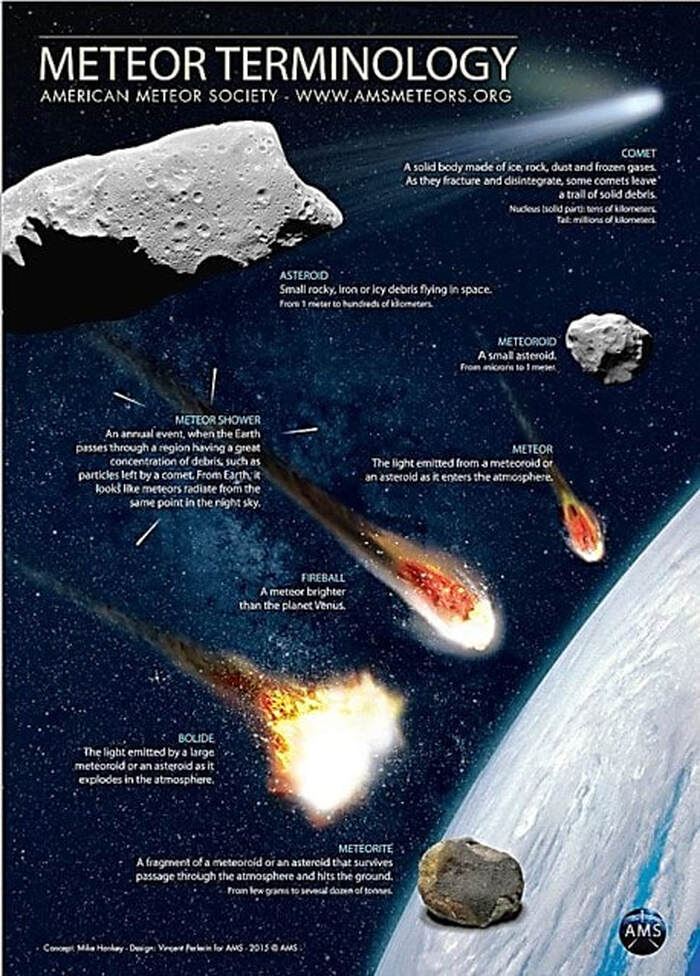 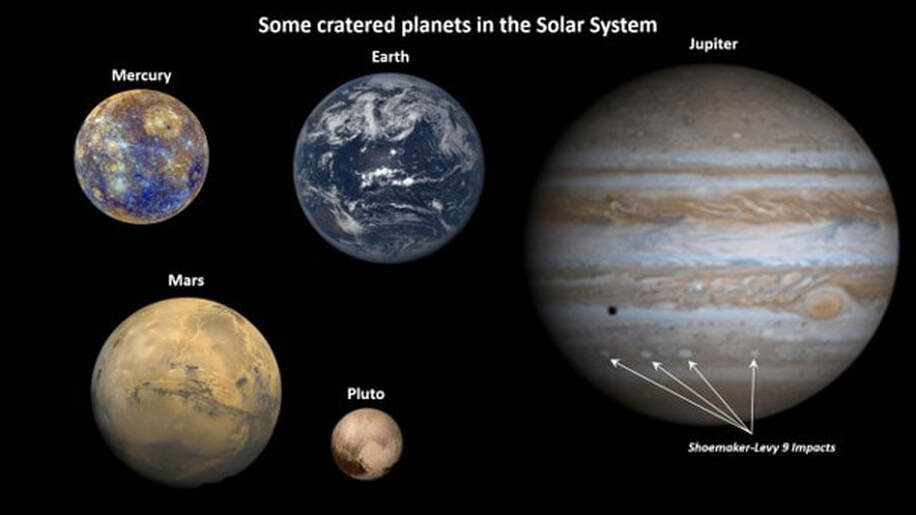 Some planets with recognizable impact craters. The Earth’s impacts have largely been erased due to active geologic processes (Pluto’s status was changed from planet to dwarf planet in 2006).
Images: From NASA and JPL at https://www.jpl.nasa.gov/spaceimages/; and https://solarsystem.nasa.gov/moons/. 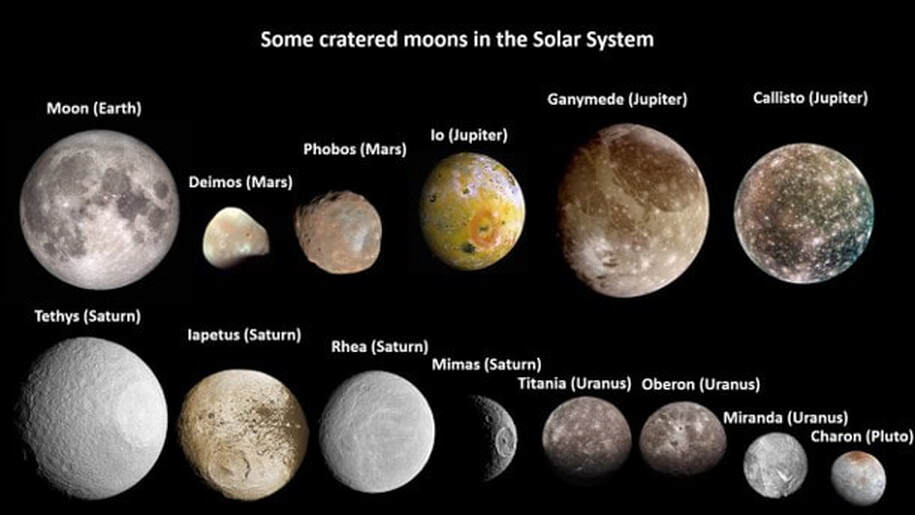 Some moons showing craters from over four billion years of impacts.
Images: From NASA and JPL at https://www.jpl.nasa.gov/spaceimages/; and https://solarsystem.nasa.gov/moons/. 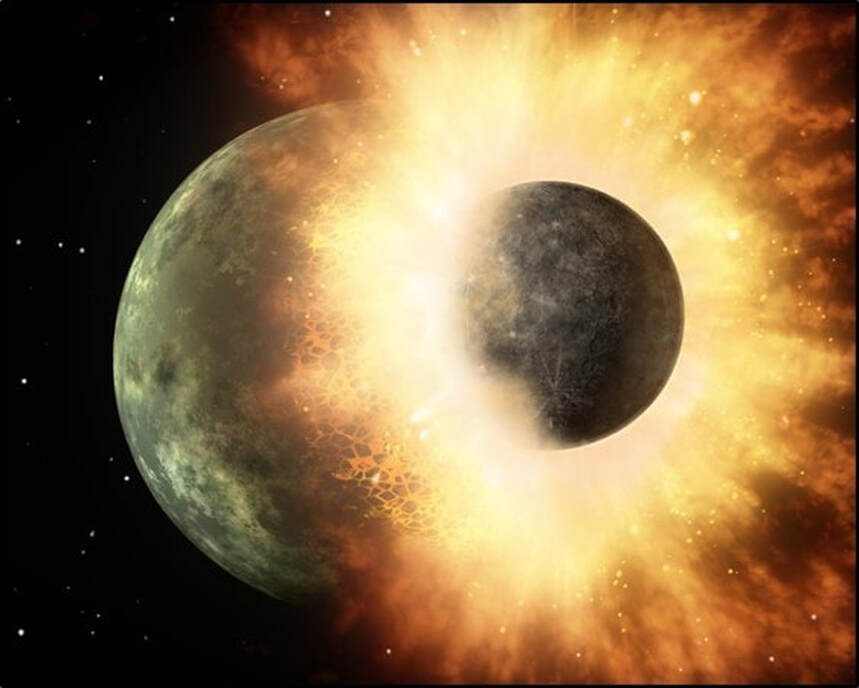 Artists concept of “The Big Splat.”
Image: NASA/JPL-Caltech, 2009, https://www.nasa.gov/multimedia/imagegallery/image_feature_1454.html.
Pre-scientific understanding of meteors was that they were harbingers of either fortune or doom, or celestial pronouncements of important births. The Magis’ star (Star of Bethlehem) of between 4 to 7 B.C. is a well-known example. Ancient Babylonian astronomers were able to track the movement of planets and objects by the first millennium B.C. In 1908 the atmospheric explosion of a 50-65-foot diameter object leveled over 750 square miles of Russian forest at Tunguska. The 50,000-year-old Barringer Crater (Meteor Crater) in Arizona was identified as an impact structure in 1920. The potential for meteor strikes to cause global extinctions was recognized in 1980 when the Alvarez team discovered the worldwide iridium layer connected to the impact-extinction of the dinosaurs. The first observation of an extra-planetary impact occurred in 1994 when Comet Shoemaker-Levy 9 collided with Jupiter.

Only about 190 impact craters have been identified on Earth. The Earth’s geological processes of weathering, erosion, sedimentation and plate tectonics have largely removed most impact evidence on the planet. Eroded remnants of impact craters are called astroblemes. The two-billion-year-old Vredefort crater (100 to 180 mile diameter) in South Africa was thought to be the oldest crater on Earth until the Maniitsoq structure (62 to 370 mile diameter) was reported in 2009.  The structure is the result of a three-billion-year-old asteroid or comet impact that punched a crater into southwestern Greenland. A Canadian mining company had been using an impact model for nickel and platinum exploration in the area since 2011. 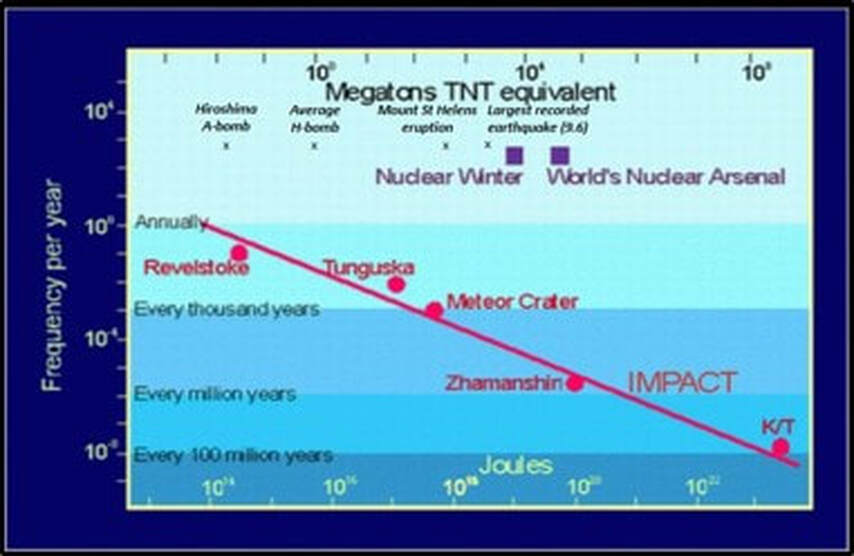 Frequency of impact plotted against energy, either in Joules or Megatons TNT equivalent. Also indicated are a number of impact events. Note an impact event with energy greater than the world's nuclear arsenal occurs on a time-scale of less than a million years.
Image: Planetary and Space Sciences Centre (PASSC), 2018, Earth Impact Database, accessed 12/3/2019; http://www.passc.net/EarthImpactDatabase/New%20website_05-2018/IntrotoImpacts.html.
​As objects pass through the Earth’s atmosphere, they begin to melt and vaporize creating a burning, glowing tail. The glow they emit inspired the names shooting star, falling star, and fireball depending on the size and brightness.  In late 1833, a spectacular shower of Leonid meteors occurred.   It had an estimated rate of a thousand meteors a minute.  James P. Beckwourth, a black mountain man and adopted Crow medicine chief observed the event in Wyoming and recorded it in his journal:

“On our way to Little Box Elder . . . we observed a remarkable meteoric shower, which filled us all (more particularly my followers) with wonder and admiration . . .  Although my warriors were ready to face death in any form, this singular phenomenon appalled them.  It was the wrath of the Great Spirit showered visibly upon them.”

An impact crater field was recently reported near Douglas, Wyoming at Sheep Mountain and Sage Hen Anticline (Kastning and Huntoon, 1996; Kenkmann, T., Sundell, K.A., and Cook, D., 2018). Sometimes multiple objects enter the atmosphere, or a large meteoroid breaks apart creating a crater swarm on the surface they strike. Initially, the authors cited thought the Douglas Crater field was the result of the breakup of a meteoroid. Further work found additional impact craters over a much wider area in Albany and Converse Counties. No iron was found in the Douglas craters. The craters that had an elliptical shape pointed to a single location approximately 100 miles to the southeast near the Wyoming-Nebraska border northeast of Cheyenne. The impact craters found in Converse and Albany counties are now believed to be secondary craters, formed by ejecta from the primary impact. Secondary craters located around large primary craters are known from planets and moons but have not been observed on the Earth until now (Kenkmann, T., Fraser, A., Cook, D., Sundell, K., and Rae, A., 2022, Secondary Cratering On Earth: The Wyoming Impact Crater Field, GSA Bulletin; https://pubs.geoscienceworld.org/search-results?page=1&quicknav=1&q=kenkmann). 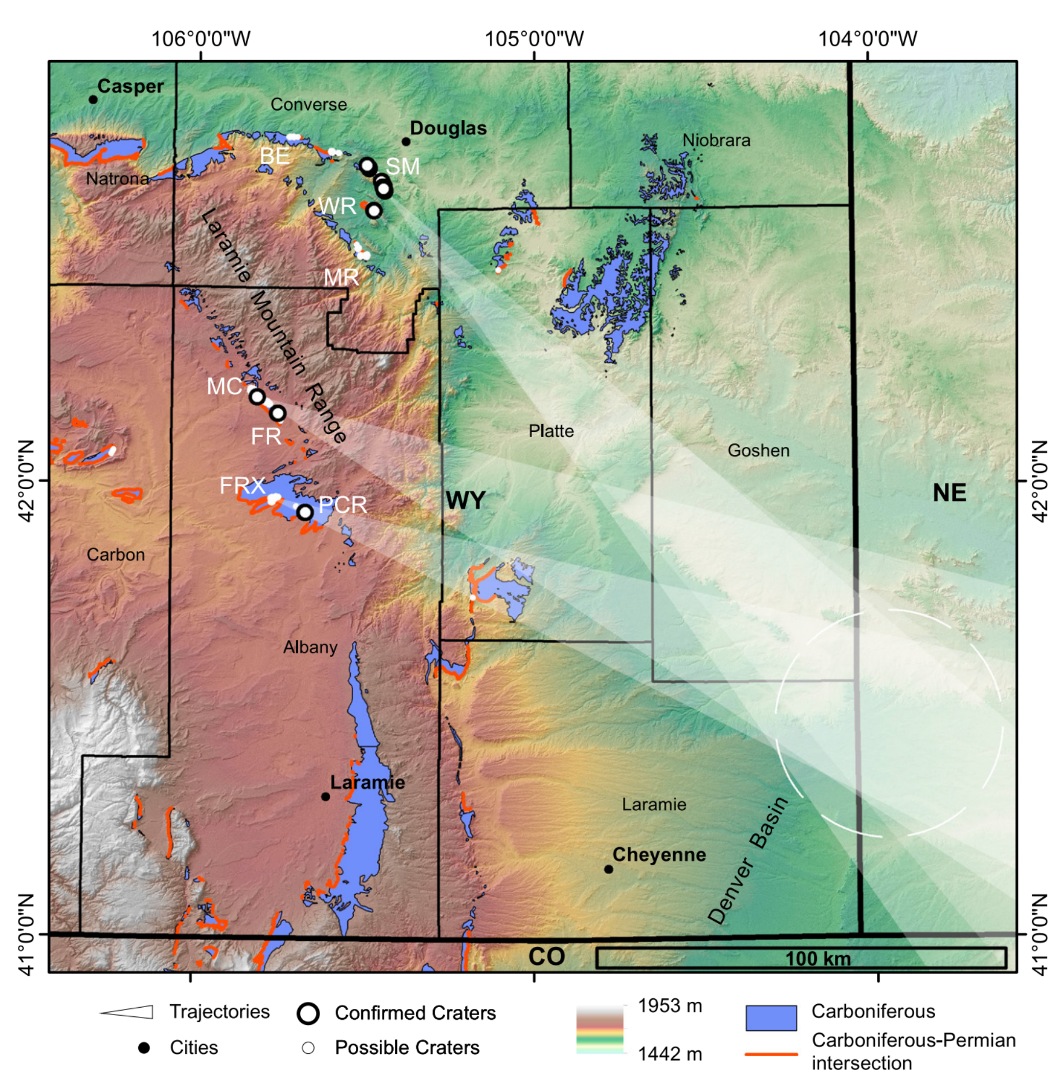 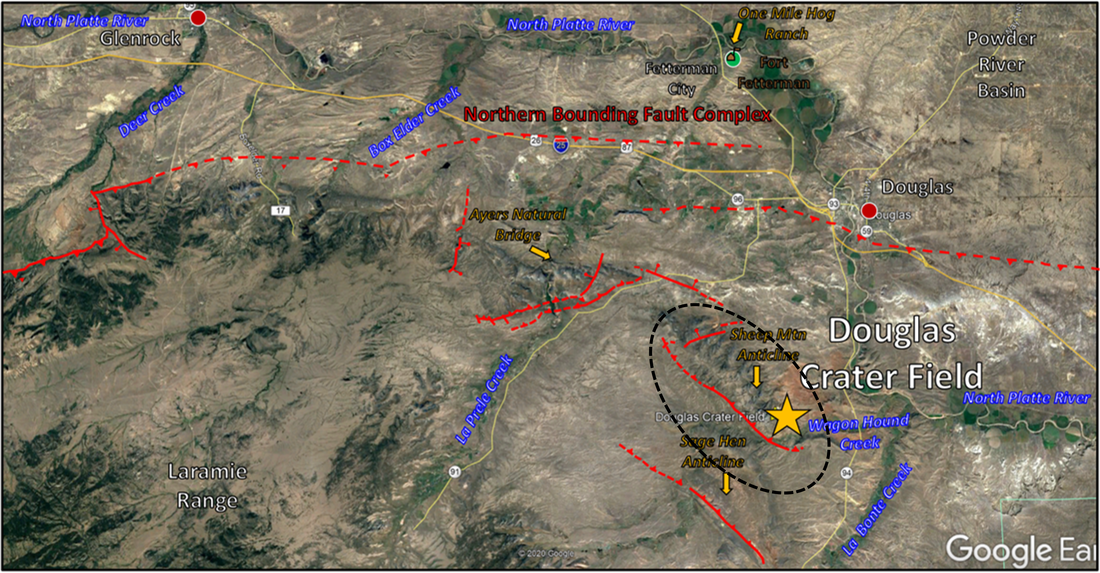 The Douglas impact field is shown with a dashed line. Long axis of ellipse is aligned with inferred impactor travel direction.
Image: Google Earth
The Converse County and Albany County impact fields are the most recently recognized crater sites in Wyoming. Craters were first reported in the Douglas area in a 1959 Master’s thesis but without discussion of their possible origin (Spelman, A.R., 1959, Geology of the area between Bed Tick Creek and the west fork of LaBonte Creek, Converse County, Wyoming: M.A. Thesis University of Wyoming, 81 p).

To date, over eighty circular and ellipsoid features are identified as possible impact craters in the Douglas swarm area (Kenkmann, et. al., 2018). The craters range from 50 to 260 foot diameter. The impact field lies within an elliptical area eight miles long (12.8 km) and four and a quarter miles wide (6.9 km).  In addition to crater morphology, rock samples show deformation that supports the interpretation of impact. These include planar deformation features, impact glass, and shock lithification of mineral grains. 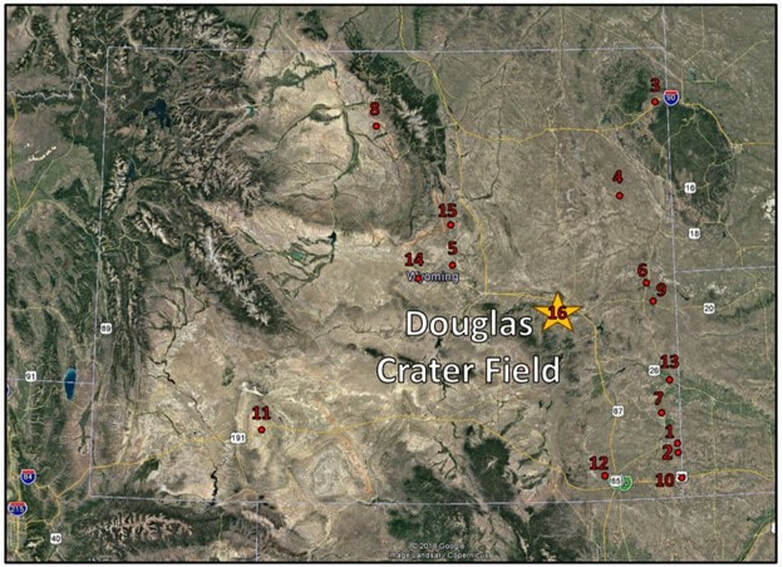 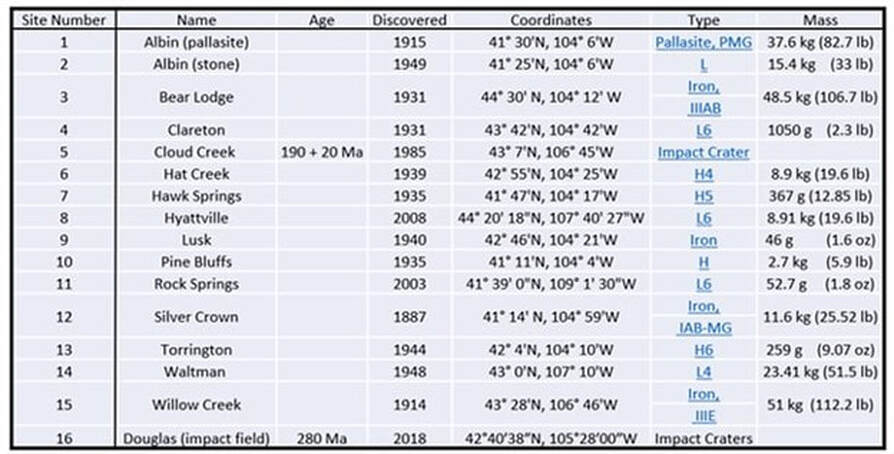 Deformation features from Sheep Mountain Crater number 1: (A) Cross-cutting and fluid-decorated planar deformation features (PDFs) in quartz grain, spacing is 3.5 micrometers on average: (H) Shock-lithification of quartz grains at indentation and interlocking sites.
Image: Kenkmann, T., Sundell, K.A.,  and Cook, D., 2018, Evidence for a large Paleozoic Impact Crater Strewn Field in the Rocky Mountains: Scientific Reports 8, Fig. 5A & 5H, p. 8; https://www.nature.com/articles/s41598-018-31655-4
The craters are exposed on the northeast flanks of Sheep Mountain and Sage Hen Anticline. Both anticlines were formed during the Laramide Orogeny that occurred about 70 million years ago.  The craters occur in the uppermost Pennsylvanian Casper Formation at the contact with the overlying Opeche Shale Member, Goose Egg Formation. This gives an approximate age of 280 million years ago for the impact. ​ 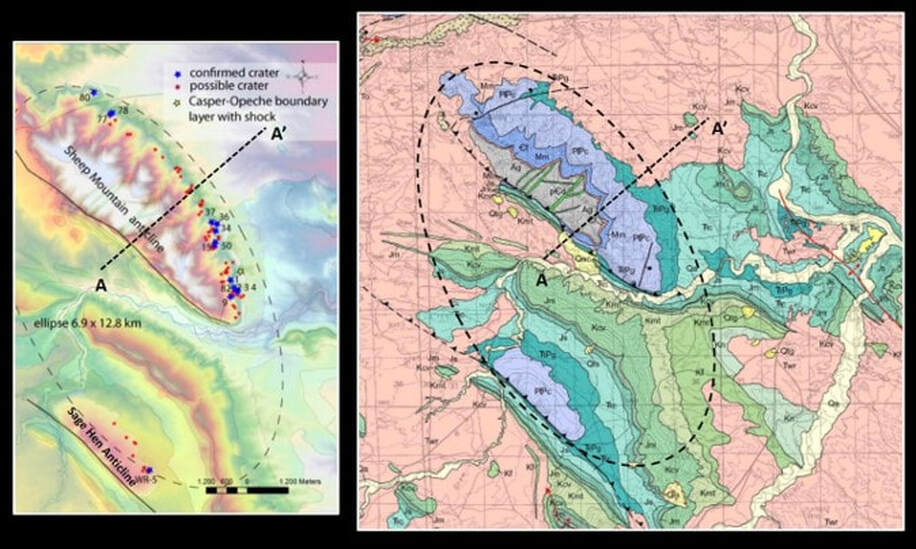 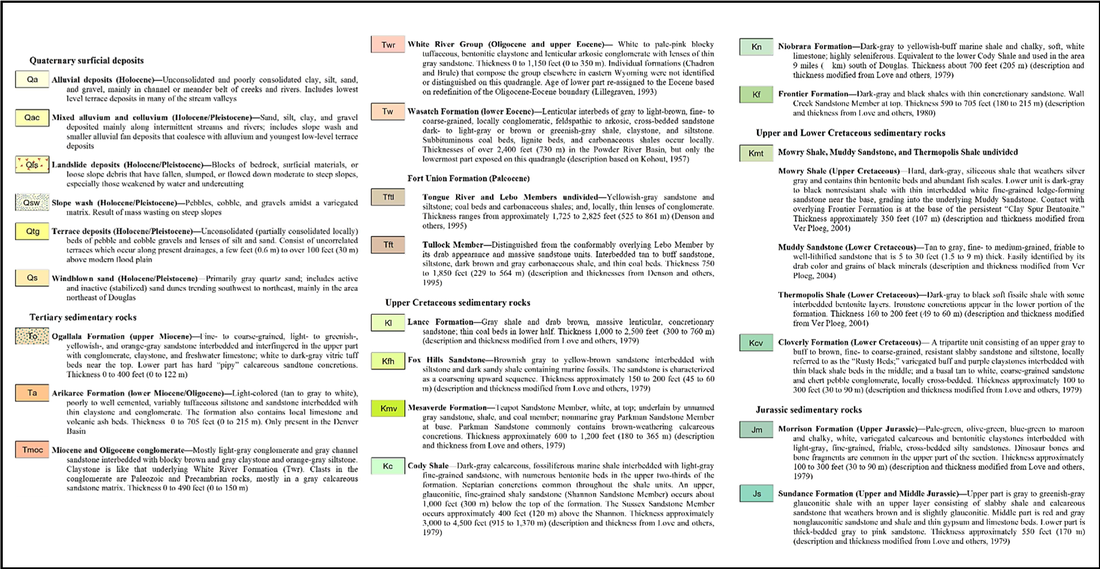 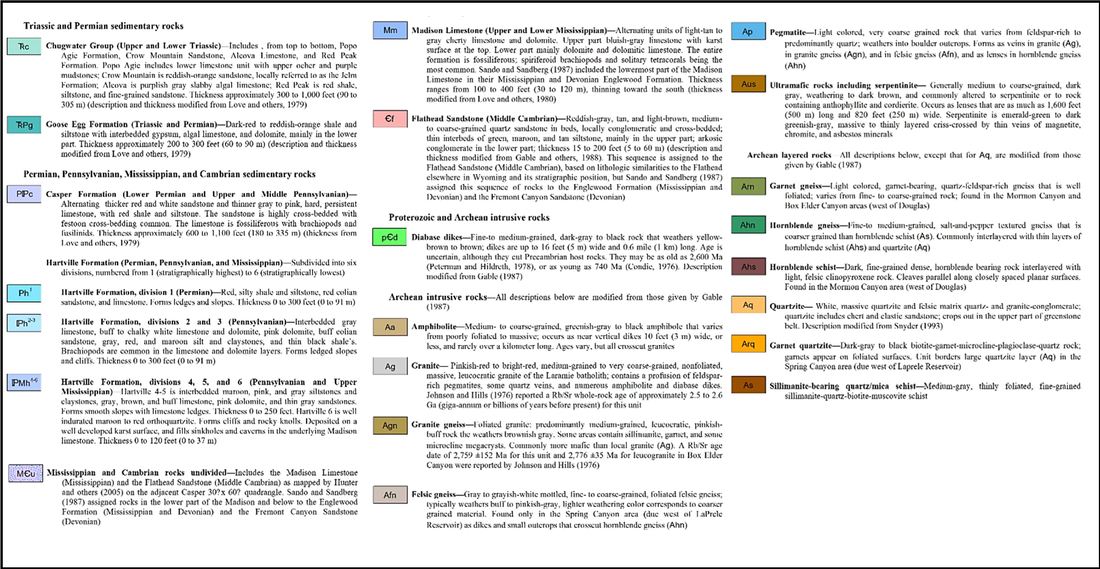 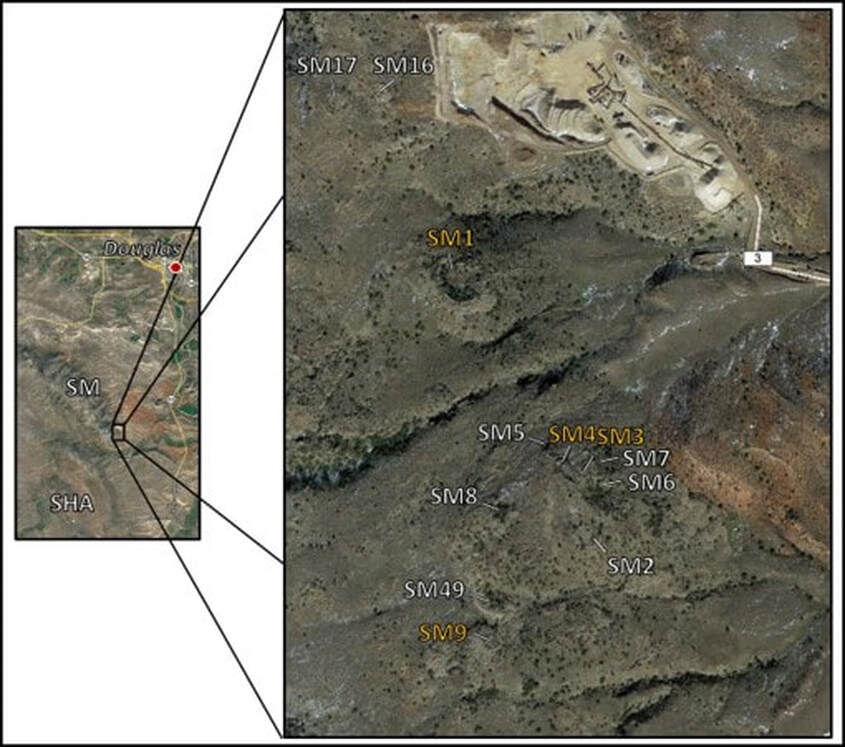 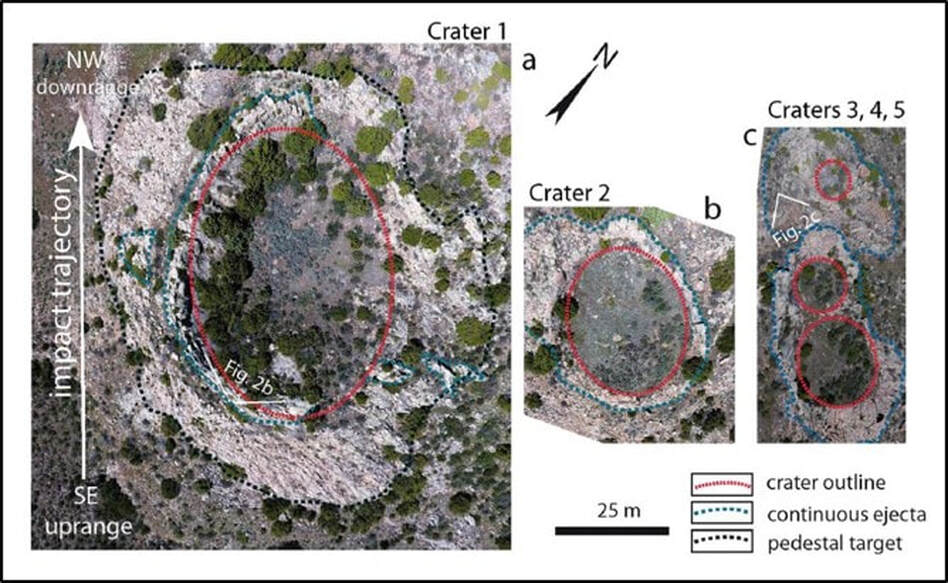 Drone images of Sheep Mountain craters SM1 to SM5 (a) Crater 1 is 60 m in diameter along the NW-SE trajectory. Its NE flank is eroded. Crater 1 samples have shocked quartz grains. (b) Crater 2 has a 31 m long axis and ovoid shape. The apparent overturned flap is well-preserved downrange. (c) Craters 3, 4 and 5 interfere with each other and together form a highly elliptical cavity in NW-SE direction. Crater 5 possibly formed by ricochet of the projectile. Dotted red and blue lines outline the crater cavities and the preserved ejecta blankets, respectively.
Image: Kenkmann, T., Sundell, K.A.,  and Cook, D., 2018, Evidence for a large Paleozoic Impact Crater Strewn Field in the Rocky Mountains: Scientific Reports 8, Fig. 4, p. 7; https://www.nature.com/articles/s41598-018-31655-4 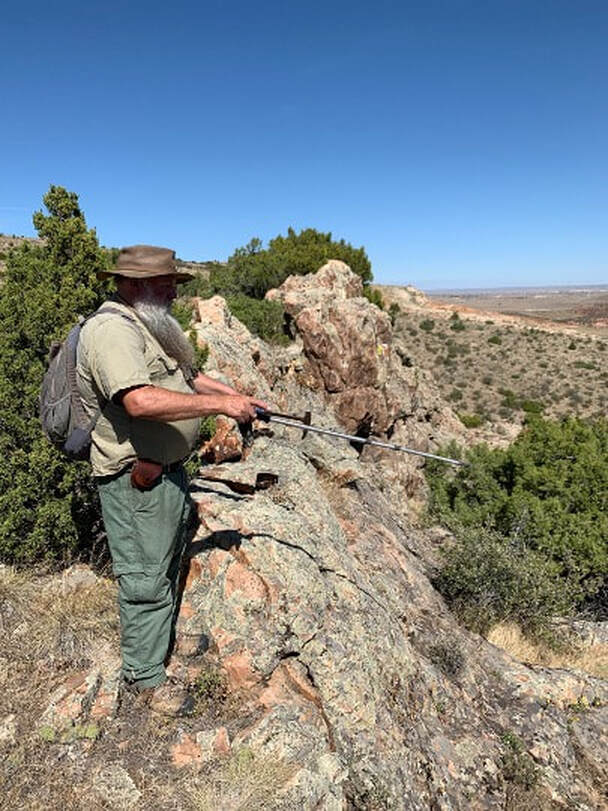 Dr. Kent Sundell on vertical sandstone rim of crater pointing toward the center of the crater.
Image by Mark Fisher
The Casper Formation is one of the units in the Pennsylvanian system located on the Wyoming shelf. This region (Wyoming Straits) was periodically flooded by a shallow arm of the Panthalassic Ocean that connected to the Midcontinent Sea. It is comprised of a mixed clastic and carbonate sequence deposited on the shelf along the east flank of the Pathfinder Uplift (Ancestral Rockies) and west of the Lusk Embayment. The uppermost Casper Formation at the impact site exhibits eolian sand dune deposition on the Wyoming shelf. Comparison of the Douglas impact craters and rocks to other craters suggest that the Casper Formation was not covered by water during impact, but the pore space did contain water.

​The continental collision and suturing between Gondwana and Laurentia was nearing completion by the close of the Pennsylvanian system when the Douglas impactor swarm collided with paleo-Wyoming. For 70 million years Earth would have a single supercontinent called Pangea (“all earth”) that was surrounded by the Panthalassic Ocean. Pangea would begin to breakup about 200 million years ago at the beginning of the Jurassic Period. 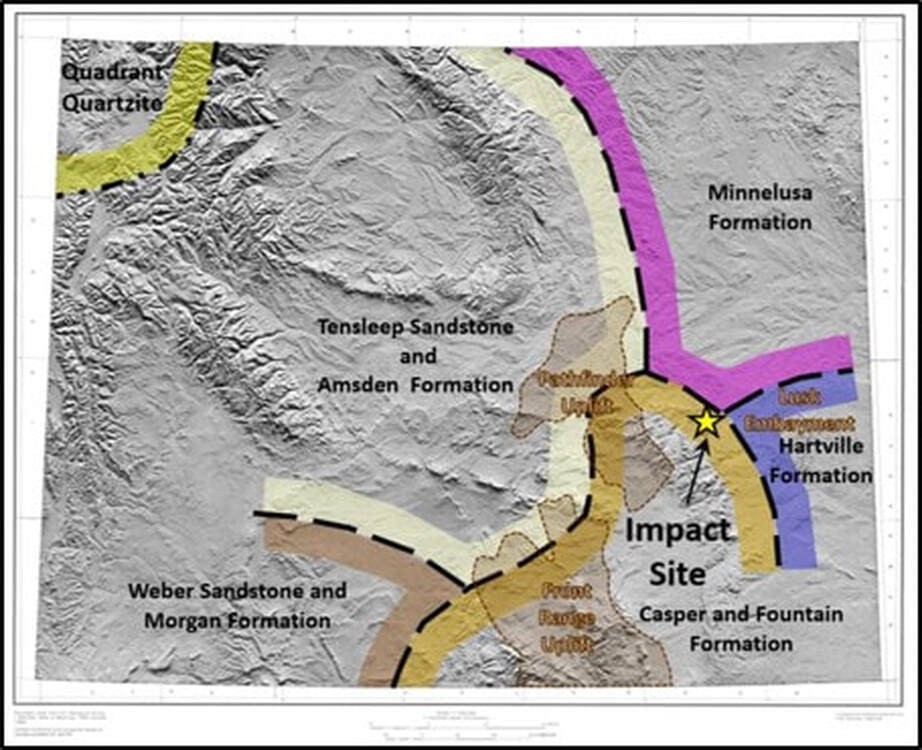 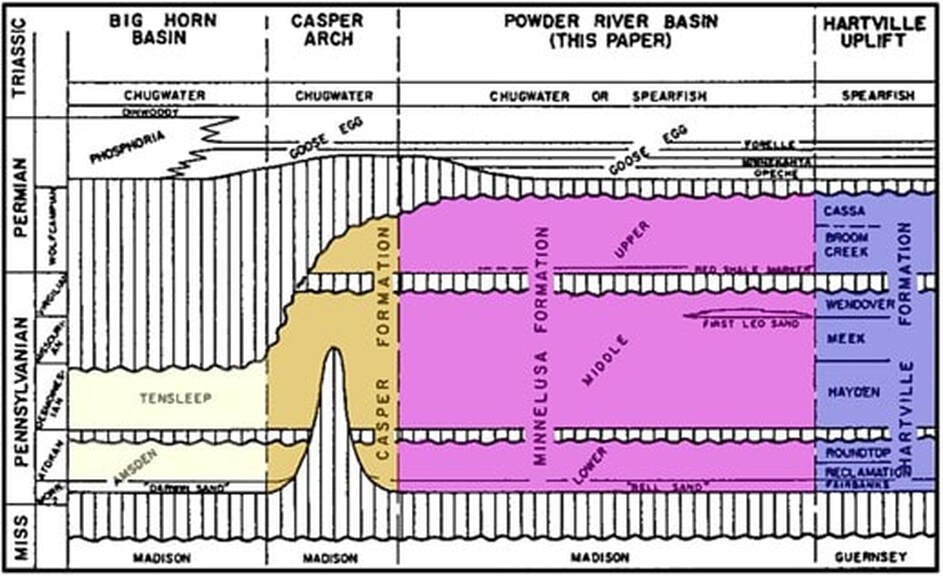 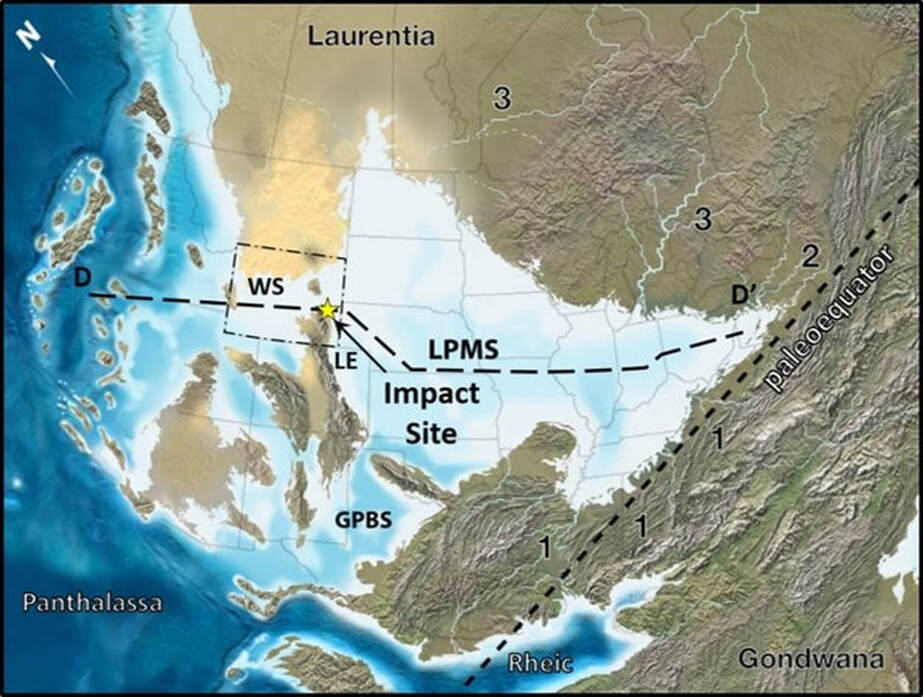 Note: The Douglas Impact Crater swarm lies on private property and there is no access at this time. There are occasional geology field trips to visit these craters. Dr Kent Sundell at Casper College, co-author of the paper on this site is the best contact about upcoming field trips (ksundell@caspercollege.edu). The landowners have graciously allowed scientists to study these craters, please do not trespass. 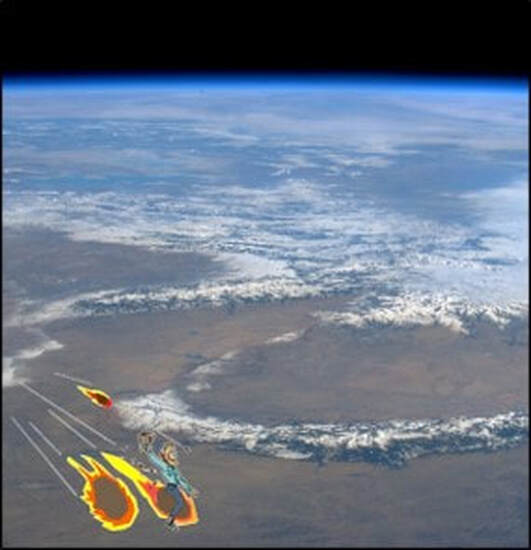 Whoopie ti yi yo, git along little dogies
You know that Wyoming will be your new home