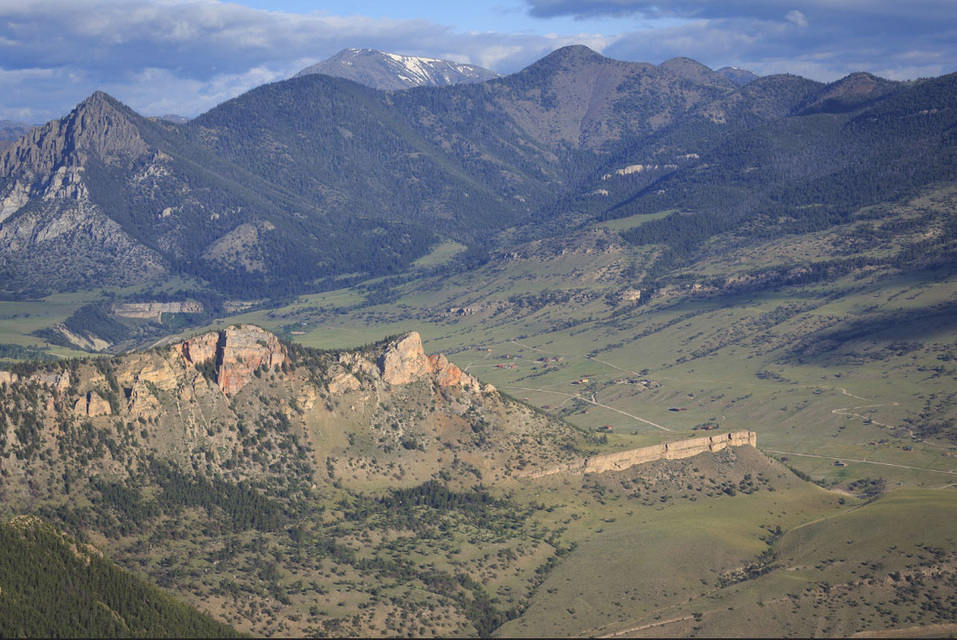 ​The trip over Dead Indian Pass to the overlook displays amazing Wyoming geology. Rocks formed in the deep time of the Archean are exposed in the Laramide uplifted Beartooth Mountains and in the recently cut canyons of the Clarks Fork and Sunlight Creek. The vast Absaroka volcanic field, 50 million years older than the Yellowstone system, encompasses the background. Within the volcanic deposits and lying on “in place” Cambrian units are huge blocks of Paleozoic carbonate displaced tens of miles by the Heart mountain detachment. This entire landscape was reshaped by glacial ice several thousand feet thick just 20,000 years ago. The end result is awesome! Optional hike to top of Pat O’Hara Peak is probably most scenic hike in entire area for amount of elevation gain.​

Dead Indian Hill overlook (8,040 feet elevation) is located 31 miles north of Cody, at the highest point of Chief Joseph Scenic Byway. The 180 degree panorama encompasses some of the most pristine landscapes and interesting geology in Wyoming. The crystalline basement rock exposed to the north in the Beartooth Mountains is 2.7 to 4.0 billion years old.  It underlies most of Wyoming and part of adjacent states (see figure below).  This ancient basement is part of a block of stable continental crust Wyoming craton. Plate tectonic collisions welded it with seven other Archean-age blocks to assemble the North American continental craton (aka. “The United Plates of America”) by about 1.75 billion years ago. 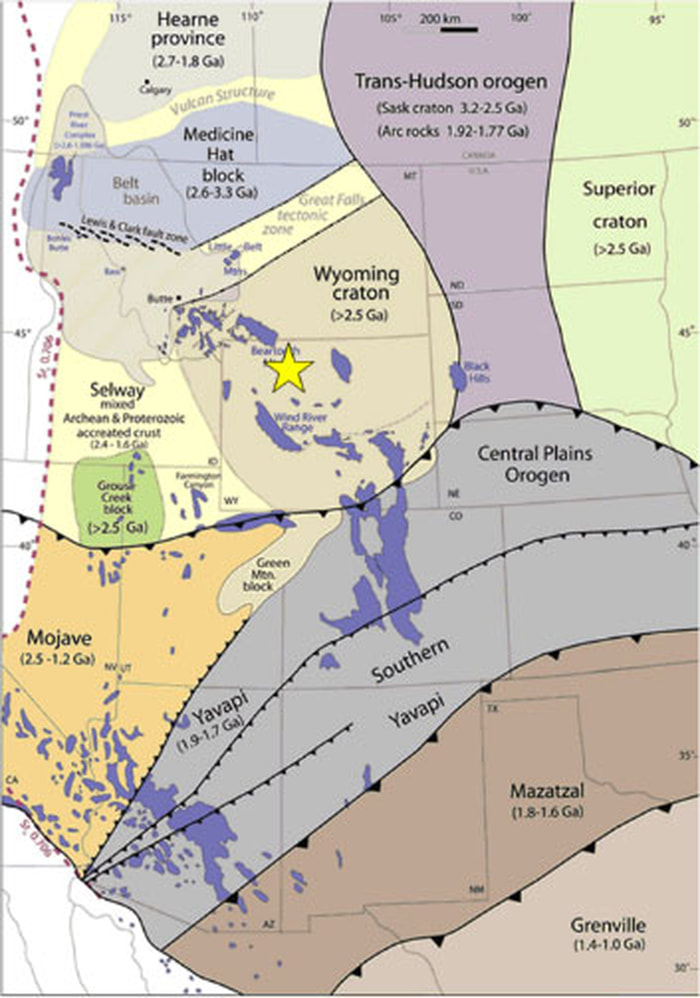 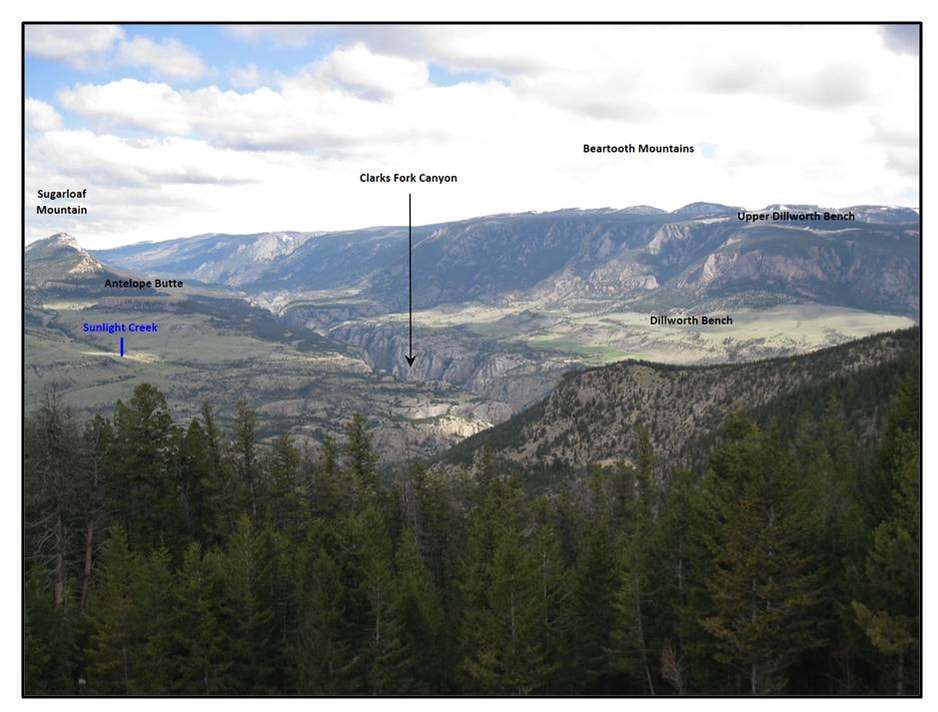 View of the Beartooth Mountains and Clarks Fork Canyon carved into Archean basement rock. ​
​Image from: Fisher, M.P., 2016, Dead Indian Hill Image
​During the last 570 million years (Phanerozoic Eon), seas flooded and receded across this ancient basement from the west for over 360 million years. The resulting stratigraphic section on the Wyoming shelf is relatively thin (3-4,000 feet), continuous and predominately marine (Cambrian Flathead through Jurassic Sundance formations). The western seas withdrew for good when mountain uplifts further west, extending from Canada to Mexico (Sevier Orogeny, 140-50 million years) blocked access to the Rocky Mountain area.
​
The Sevier uplifts shed sand, silt and clay into this area (Wyoming Foreland) through a network of eastward flowing rivers. By Lower Cretaceous time an intercontinental seaway developed by encroachment from the northern circumpolar sea and the southern developing Gulf of Mexico. The sediments deposited during this 90 million year period were reworked into a complex of marine to non-marine interfingering units. 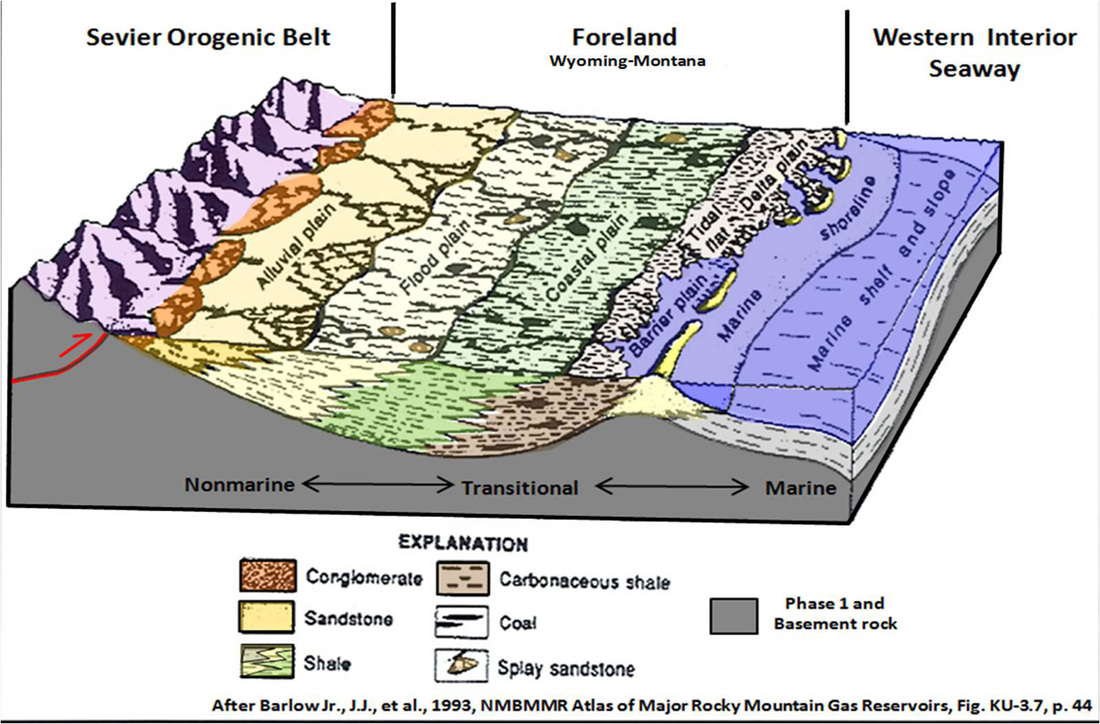 Depositional model for the Sevier Foreland period. Image from: Barlow Jr., J.J., et al., 1993, Atlas of Major Rocky Mountain Gas Reservoirs, 1993, Prepared by: New Mexico Bureau of Mines and Mineral Resources (now: Bureau of Geology and Mineral Resources), Colorado Geological Survey, Utah Geological Survey, Geological Survey of Wyoming, Gas Research Institute, and U.S. Department of Energy, Fig. KU-3.7, p. 44
The Wyoming Foreland is the regional basin east of the Sevier Mountains. The stratigraphic package deposited there varies widely in thickness, but averages 8,000 feet in the Bighorn Basin. These clastic units are less continuous than those deposited earlier on the Wyoming shelf. They are dominantly marine in the east and non-marine to marginal marine and are thicker to the west. This package consists of all strata from the Jurassic Morrison to the Cretaceous Meeteetse/Lewis formations.
The Wyoming Foreland began to partition into the mountains and basins we see today during the Laramide Orogeny (70-52 million years). The basin sediments were supplied by local uplifts such as the Big Horns and Beartooths and no longer relied on a regional clastic source area (Sevier Uplifts). The rocks of this period are discontinuous, non-marine, very thick (10,000-18,000 feet) and include all units from Cretaceous Lance to Eocene Willwood formations.
​
Near the end of the Laramide Orogeny, volcanism began along the northwestern edge of the Wyoming craton (Absaroka Volcanic Province, 53-43 million years). The Absaroka Mountains are the dissected remnants of this activity. Two of the volcanic centers lie within the view from Dead Indian Hill. The Crandall volcano (50.1-49.2 million years) is located at Hurricane Mesa. The Sunlight volcano (49.6-48.1 million years), the largest in the eastern Absarokas, is centered in the area of Sunlight and Stinkingwater Peaks. These volcanos added more sediment (Absaroka Volcanic Supergroup) to the Bighorn Basin. They triggered the largest landslide ever discovered on the surface of the earth, the Heart Mountain Detachment (48.87 million years, see Geowyo Heart Mountain page).  A 500 square mile block of sedimentary and volcanic rocks detached catastrophically and slide to the southeast on a two degree slope, breaking up as it moved. Dead Indian Hill is about 30 miles from the breakaway zone located in the northeastern corner of Yellowstone National Park. Looking to the west from the overlook you can see massive, light colored blocks of Paleozoic carbonate and brown volcanic rock that would have been moving toward you about 49 million years ago. At this point the detached blocks cut up section over Dead Indian Hill (estimated relief: 2,500- 3,500 feet) before continuing to slide on the Bighorn Basin floor for an additional 30 miles, beyond Heart Mountain to the north end of the McCullough Peaks. 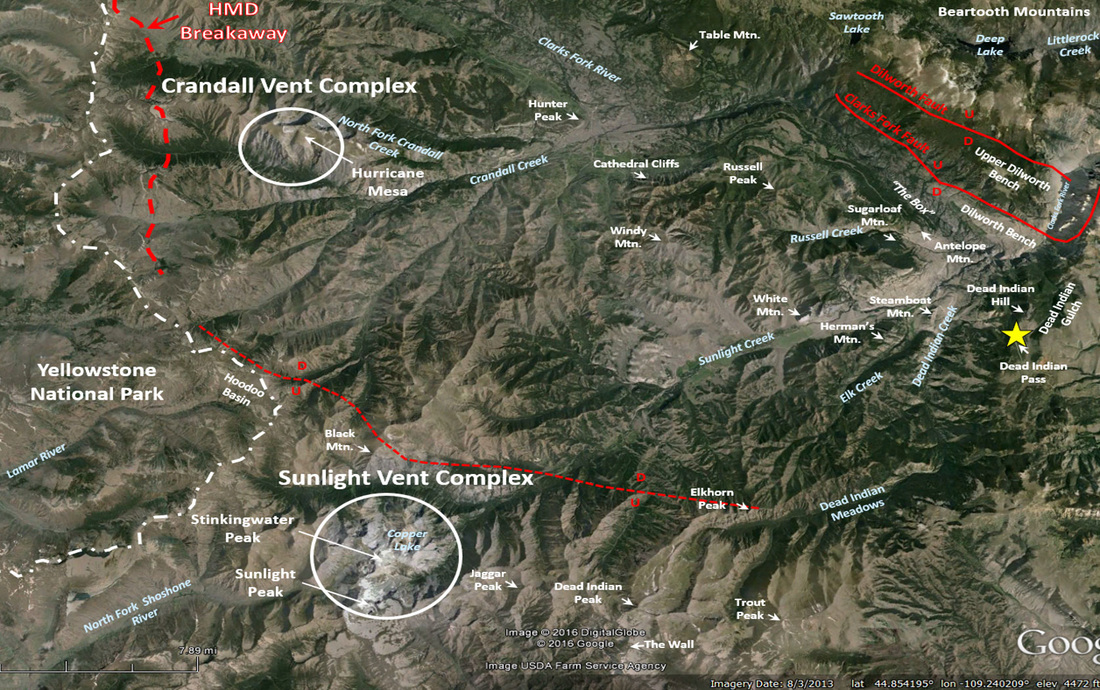 Important features viewed from Dead Indian Hill overlook (yellow star).
The Yellowstone volcanism (2.2-0.63 million years) is related to the movement of North America over a “hot spot” from the earth’s mantle. The three caldera forming eruptions (2.2, 1.2 & 0.63 million years) obliterated most of the older Absaroka Range in the central and western portions of the park. A young smaller eruption that produced the West Thumb caldera at Yellowstone Lake (0.15 million years) left an ash deposit on the Flathead sandstone at the old bridge across Sunlight Creek (replaced by new bridge in mid-1980s).
​
Glacial ice from the Yellowstone-Beartooth ice cap flowed and lakes developed in the stream valleys in view below Dead Indian Hill. Glacial sculpting, deposits and features can be seen on the high Absaroka peaks and throughout the Clarks Fork Valley. 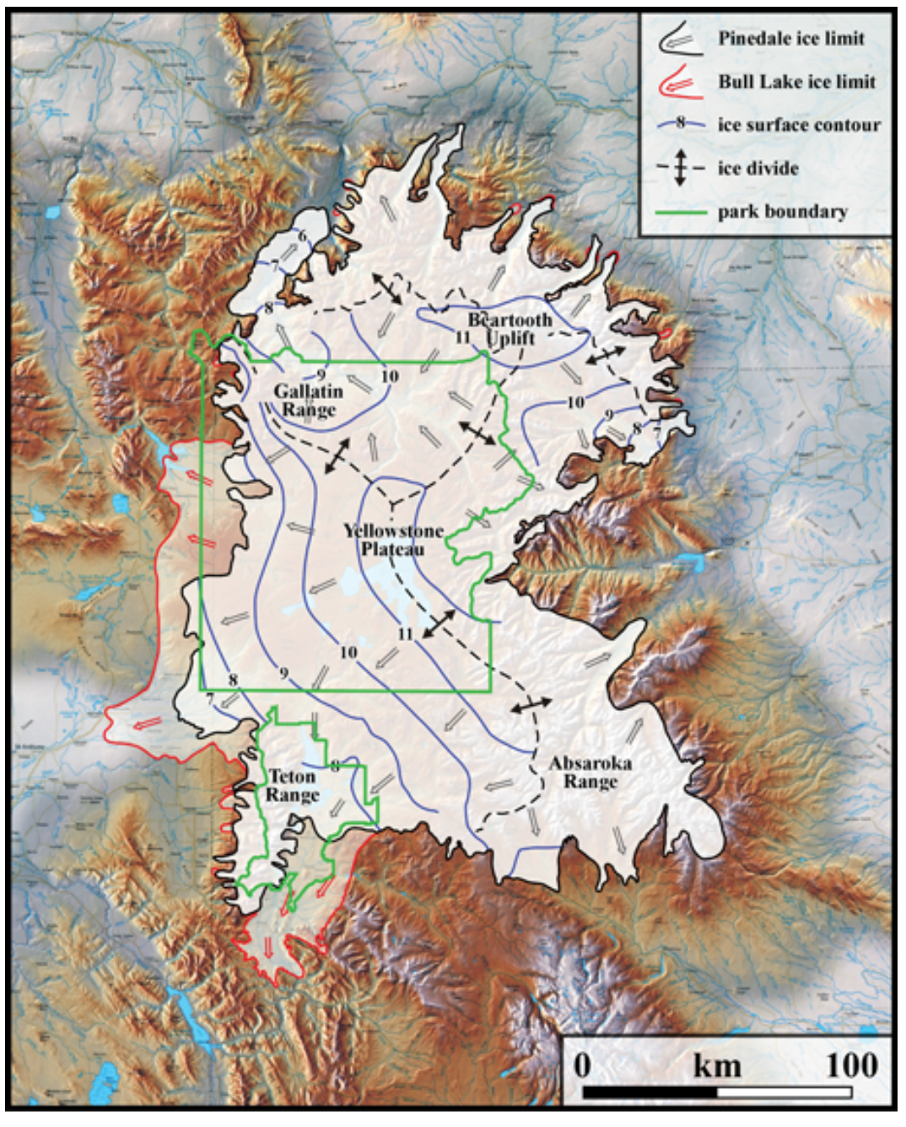 What you will see at Dead Indian Hill

​It is a 30 mile scenic drive from Cody to the Dead Indian Hill overlook that takes about 40 minutes. In addition to the overlook, there is a half-day hike to the top of Pat O’Hara Peak that is my favorite in the entire Cody area. The hike is a total out and back of six miles with an elevation gain of 1,600 feet.  The total hike should take about four hours, which includes time to sit on top of the peak at 9,771 feet enjoying the geology and view.

Starting at the intersection of US 14-16-20 (Sheridan Ave) and US 14A (16th St) in downtown Cody, head northeast toward Powell on US 14A, 0.4 miles turn left on WY 120 which is the road north toward Belfry, 0.8 miles bridge over Shoshone, 10.0 miles high elevation point on road known as Skull Pass, Heart Mountain is on your right (see Geowyo Heart Mountain page), vista of Dead Indian Hill, Bald Ridge and Beartooths opens up ahead, 16.8 miles turn left on WY 296 Chief Joseph Highway to Sunlight Basin, 21.8 miles outcrop on right of white Gypsum Spring Formation that is mined near Cody and Lovell to make wallboard, 22.4 miles pull-off on left to view red Triassic Chugwater shales and siltstones on the right, 23.2 miles “scenic turnoff” on left as roads curves hard to right is an outcrop of the Permian Phosphoria Formation which is one of the primary oil producing layers in the subsurface of the Bighorn Basin, you can see naturally oil-stained porosity in this carbonate rock with fossil marine shells, 27.1 miles outcrops on left and across creek to right are Tensleep Sandstone, a wind-blown deposit that is the number one oil producing layer in the subsurface of the Bighorn Basin, 28.4 miles Forest Service road 100 to Bald Ridge on right, 29.0 miles Forest Service Road 103 on left to Pat O’Hara hike, 30.1 miles Dead Indian Hill Overlook scenic turnoff on left. ​

​A 4WD with clearance is best, but a passenger car can make it if the road is dry and you use common sense. The Forest Service road is usually blocked by snowdrifts through early June. If snowdrifts block the road, you can start your hike early, but you should then expect snowdrifts on the trail. At 29.0 miles coming from Cody, turn south (left) on Forest Service dirt road 103 and go through gate (if you open a gate, be sure to close it), 0.4 miles pass 103A, 0.7 miles pass 103 2C, gate at 1.1 miles, 1.5 miles fork in road take right fork, 2.0 miles log pole fence, 2.8 miles high point on road, 3.1 miles park along left side of road, hike begins on ridge just beyond fallen log pole fence on right side of road. The walk heads south (left) on the ridge that separates the Bighorn Basin to the east from Sunlight Basin to the west until it reaches Pat O’Hara. It begins on a two-track that quickly becomes a single track trail. During the first half mile you will encounter a couple of forks in the trail or two track. Take the right fork each time. For the first mile through mostly open terrain it gently climbs the crest of the ridge and then descends to a meadow, all on volcanic rock. As you cross the meadow, the trail becomes faint, but you can easily pick it up again on the far side. From the meadow which is a drainage divide, the trail climbs steeply 600 vertical feet through trees for a half-mile. During this climb, the rock is Madison limestones and dolomites, some of which have been mapped as part of the Heart Mountain Detachment (see Geowyo Heart Mountain page). The trail then becomes mostly flat for a half-mile through trees and meadow over Madison carbonates and then the final three-quarter mile is all open on a 600 foot climb to the peak. There is no trail for the last three-quarter miles since everyone picks their own path above timberline to the peak. This last part of the hike is on volcanic rock with the crest of Pat O’Hara being a lava flow. Total roundtrip hike is six miles with elevation gain of 1,600 feet. This is grizzly bear habitat so walk with a partner and bring your bear spray!  Also, start early in the day because Pat O’Hara attracts summer thunderstorms in the afternoon. The best time is late June or early July when wild flowers are blooming, there are a few patches of snow remaining and the basin/mountains are at their greenest.  Enjoy! The 360 degree views are incredible. 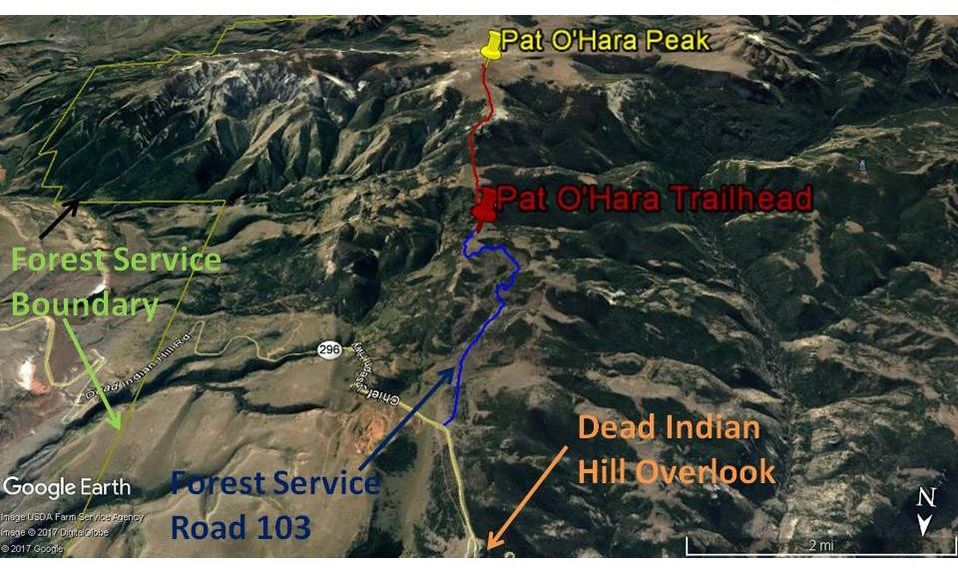 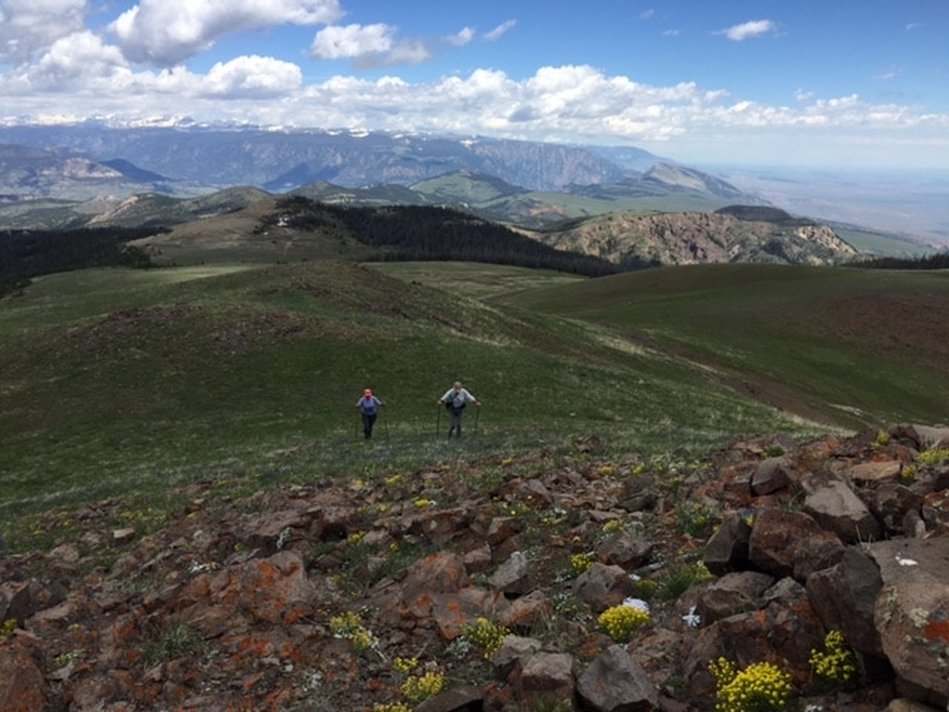 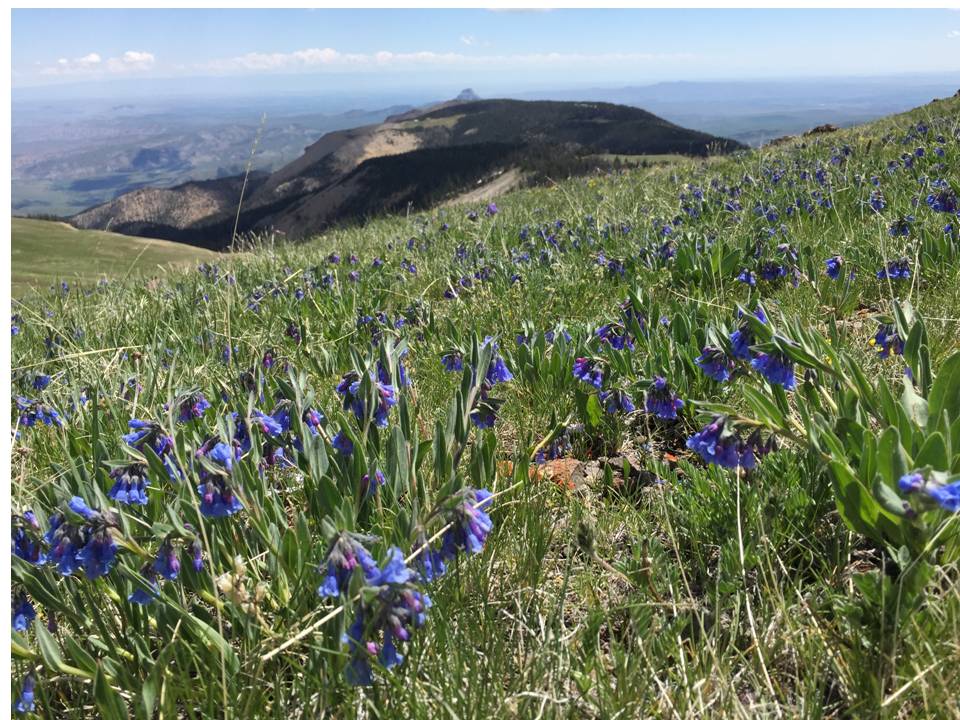