​Large erosional lowland area on the Great Plains of Wyoming bounded by a sandstone escarpment. This area is rich in the history of Indians, travelers of the transcontinental route across America, Fort Laramie and cowboys.

​Goshen Hole is an erosional lowland surrounded by a Tertiary escarpment called Goshen Rim with 500 to 600 feet of relief. It lies within the North Platte River drainage system, northern Denver-Julesburg Basin. The “kite-shaped” feature is 45 miles wide in the west (north to south near Fort Laramie), and extends about 100 miles in length (west to east, Chugwater Creek to Lisco, Nebraska). The outcrop pattern of the escarpment is a pronounced right angle at its western margin (see image above). The maximum headward erosion of the escarpment occurs at this point just over two miles from Chugwater Creek (1.5 mile from Chugwater Creek Valley escarpment). 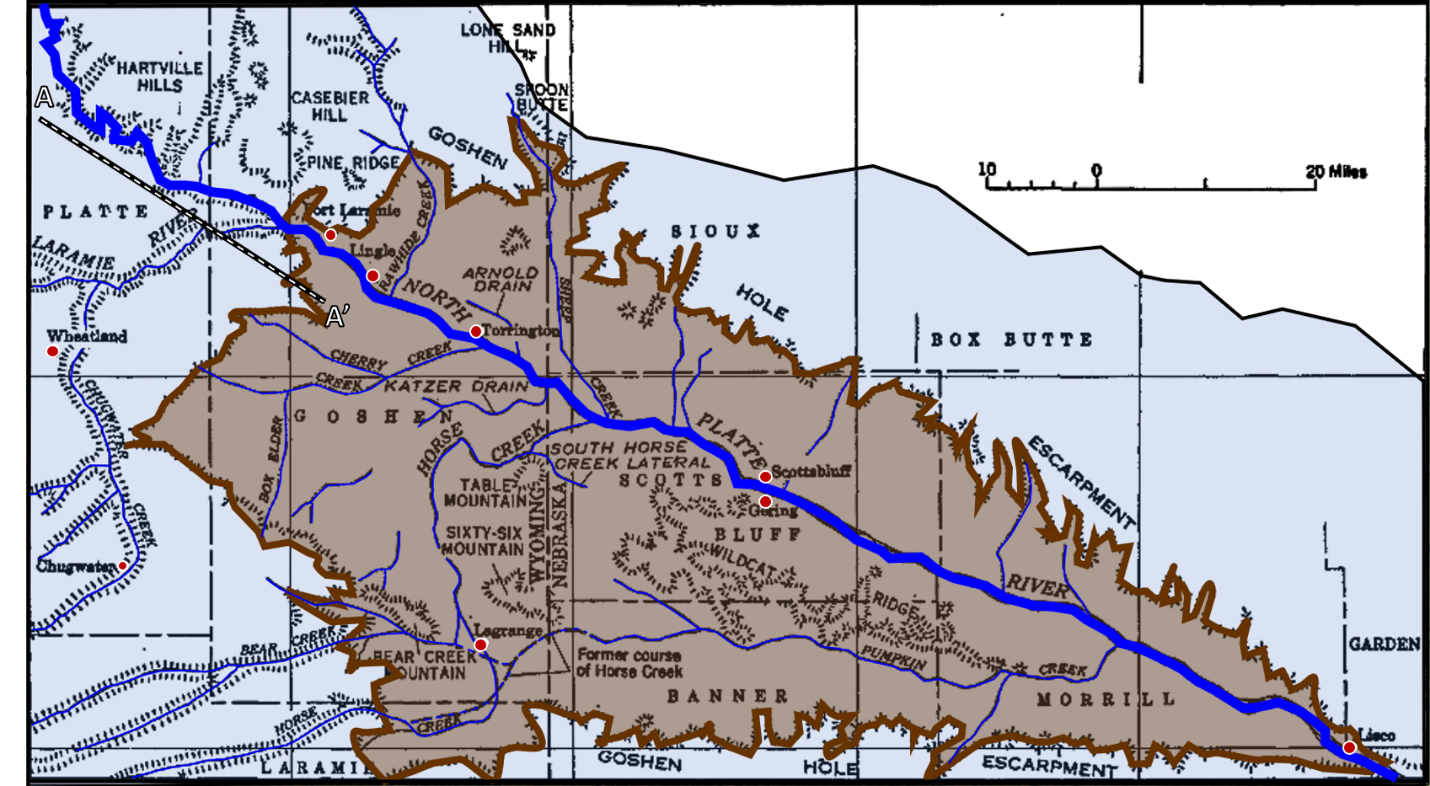 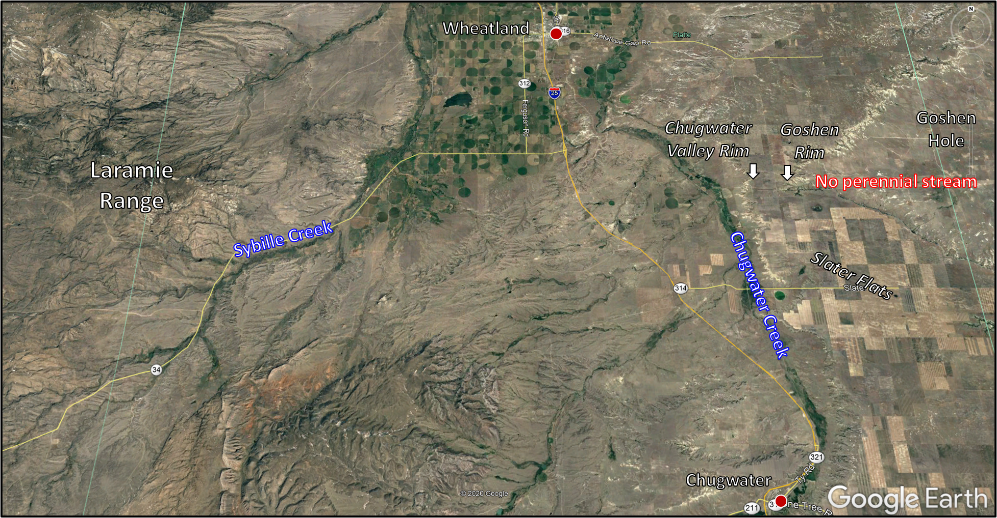 Goshen County was formed in 1911, organized in 1913, and named for Goshen Hole. The origin of the place name Goshen Hole is obscure and there are numerous versions of the source; including: an Indian warrior named Goshe’, a French-Canadian trapper of the same name who frequented the area, after the biblical land of Goshen in Egypt, John C. Fremont’s camp site during his 1842 expedition, a French trader, or a cowboy named Goshen Hale. The first published use of the place name Goshen Hole was on Holt’s 1883 map of Wyoming territory.

A portion of Holt’s 1883 map of Wyoming territory showing Goshen Hole and western escarpment (brown).
Image: After Holt, G.L., 1883, Wyoming map, from Barry Lawrence Ruderman Antique Maps:https://www.raremaps.com/gallery/detail/59636/wyoming-compiled-by-permission-from-official-records-of-th-hole.
​The North Platte River valley was the transcontinental route for trappers, explorers, traders, soldiers, and emigrants from 1820s to 1869. The trail is scarred by wagon ruts and outcrops were the graffiti walls for 19thCentury travelers. Permanent settlement in the area began with the arrival of cattlemen and homesteaders after the Homestead Act of 1862 and the Laramie Treaty of 1868. Paleo hunter gathers, Indian people and game animals had been traveling over this route for thousands of years before the arrival of European Americans. 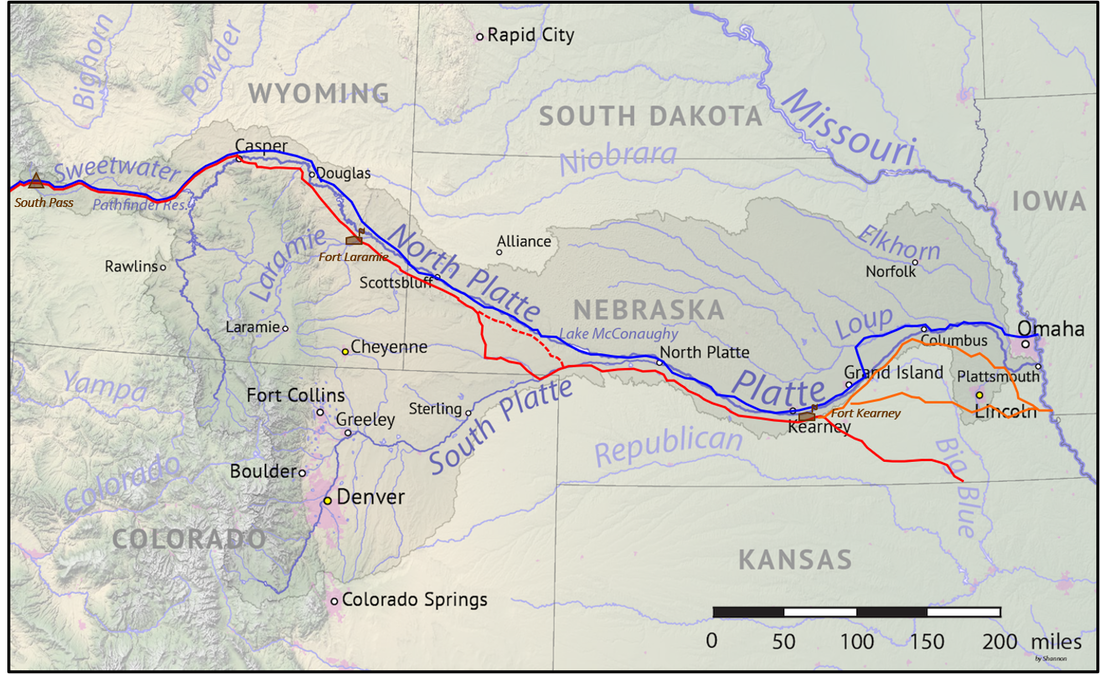 The Great Plains region of the United States lies west of the Mississippi River and east of the Rocky Mountains. The High Plains subdivision border in southeastern Wyoming is the Hartville Uplift and the Laramie Mountains. The regions semiarid climate supports a short-grass prairie with cottonwoods and shrubs along stream banks.

The northern Denver-Julesburg Basin is filled with a maximum of 12,000 feet of sedimentary rocks. The rocks exposed are mainly a Tertiary “blanket” of clastic sedimentary and volcanic ash deposits. Except for the Upper Cretaceous Lance Formation, Mesozoic strata are not exposed in Goshen Hole. These older rocks are found in the foothills adjacent to the mountains and in the subsurface. The underlying Paleozoic rock outcrops are likewise seen in the subsurface and on the eastern side of the Laramie Range foothills and in steep-walled canyons of superimposed streams that chiseled through the mountains. The geography of the area consists of Mountains (8,000 to 8,500 feet elevation), Highland Plains (5,250 to 5,450 elevation), and Goshen Hole Lowland (4,250 to 4,750 feet elevation). Erosional outliers lie within the lowland including the geographic landmarks of Scotts Bluff and Chimney Rock, Nebraska.
​
The Denver-Julesburg basin, like other Wyoming basins, was created by the Laramide Orogeny. The basin axis trends northward in Colorado and the state line area but abruptly changes direction to the northeast about three miles north of Chugwater. This direction aligns with the Wheatland-Whalen fault system. These faults are sub-parallel with the trend of the Precambrian Cheyenne Belt. The Cheyenne Belt is a suture between the Archean granites and gneisses of the Wyoming Craton and the Proterozoic metasedimentary and metavolcanic rocks of a volcanic arc that attached to the craton between 1.78 and 1.74 billion years ago. Goshen Hole is located at the site of several ancient mountain building events (i.e. orogeny). 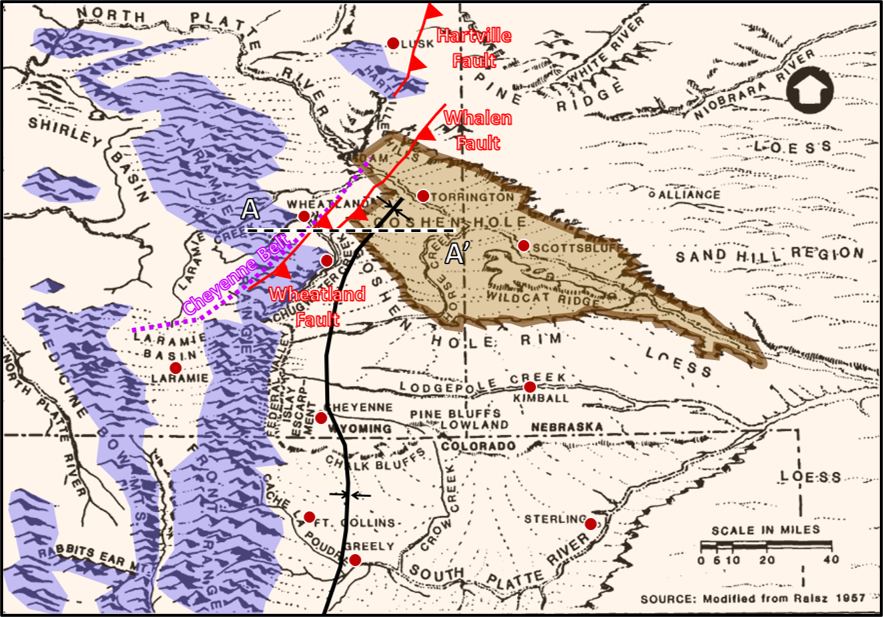 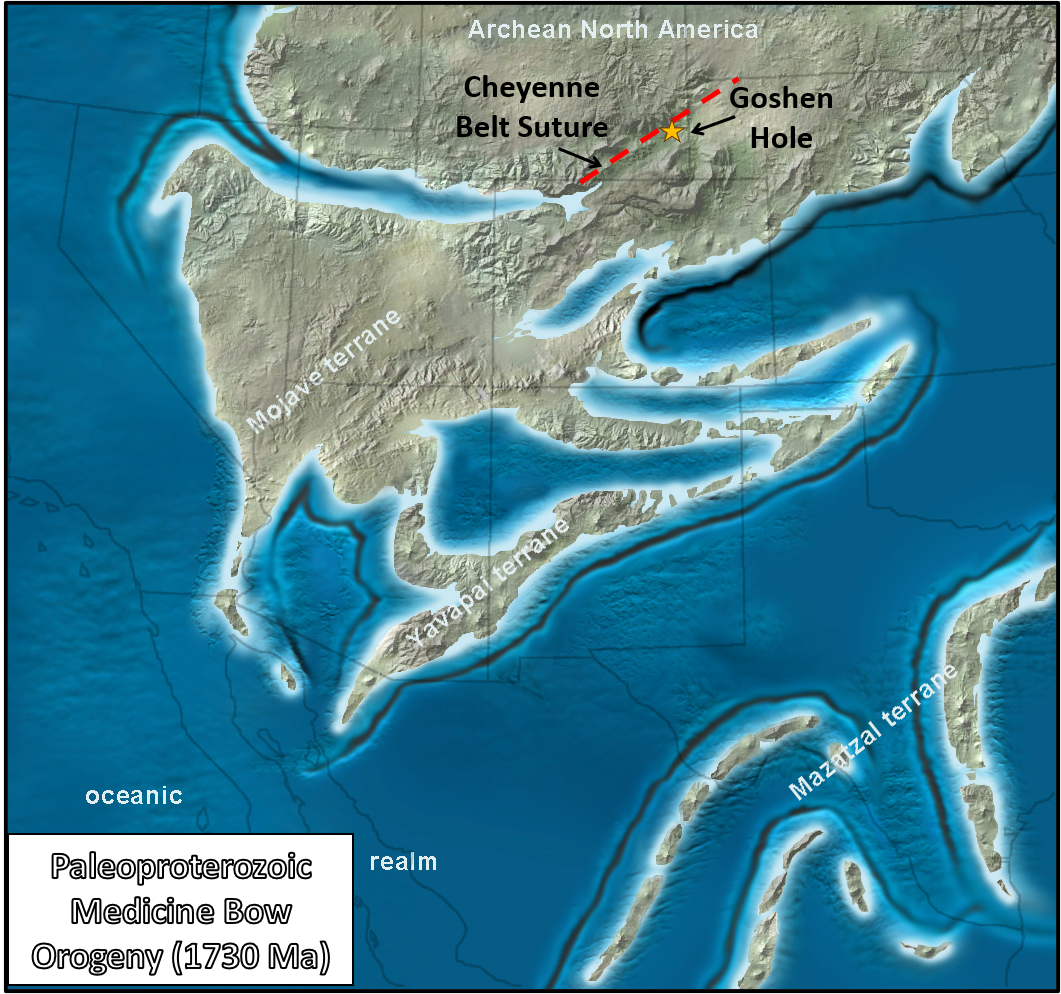 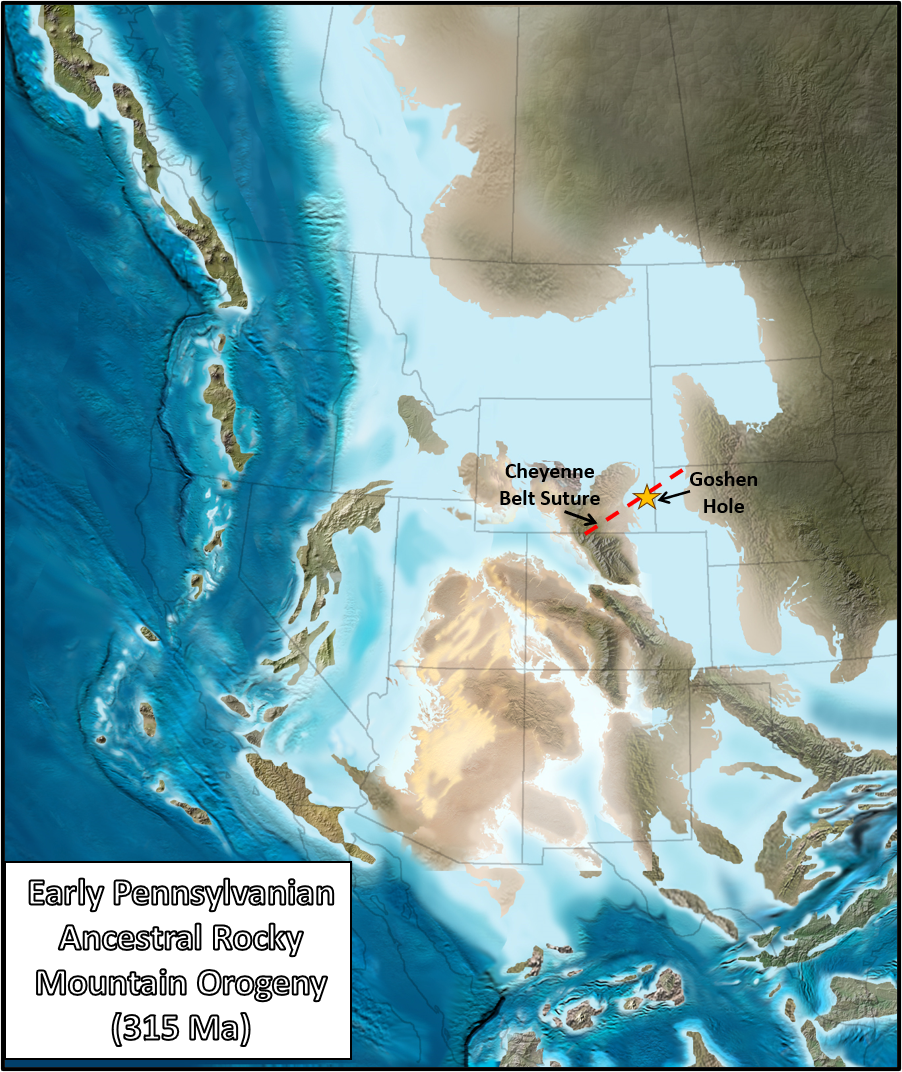 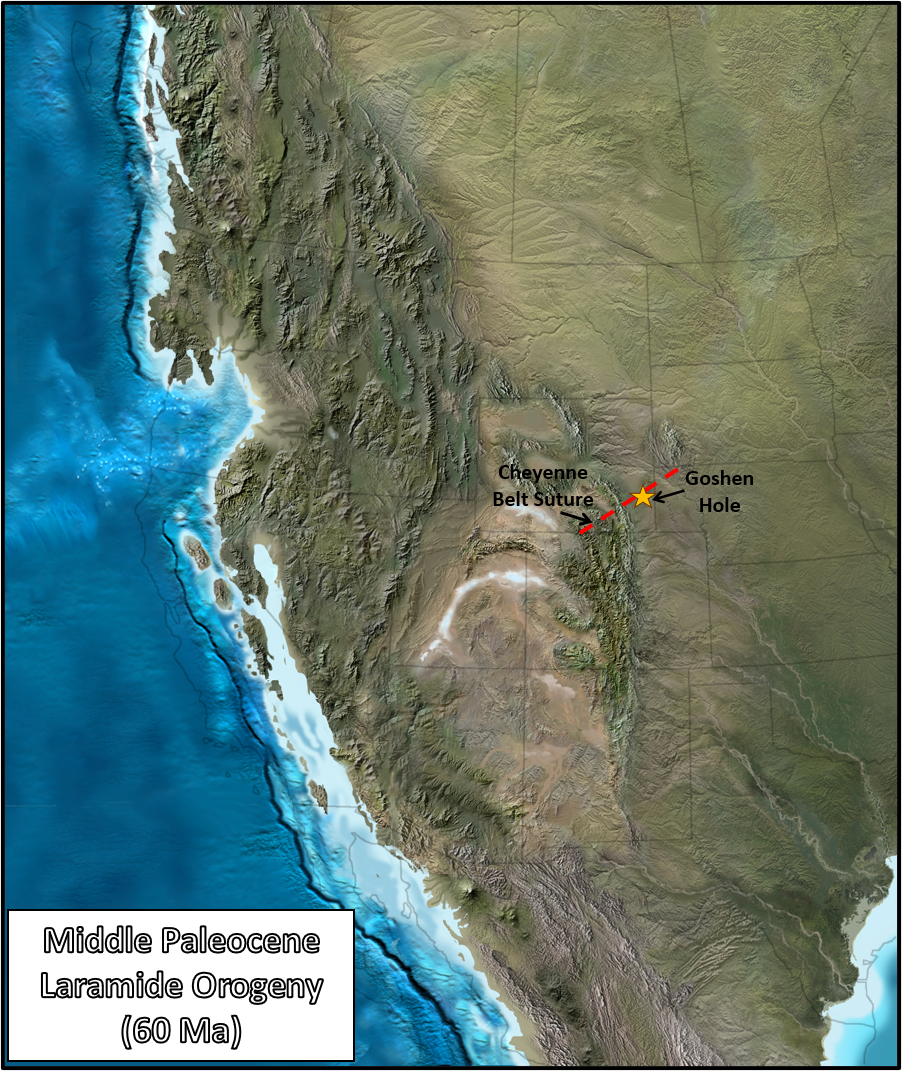 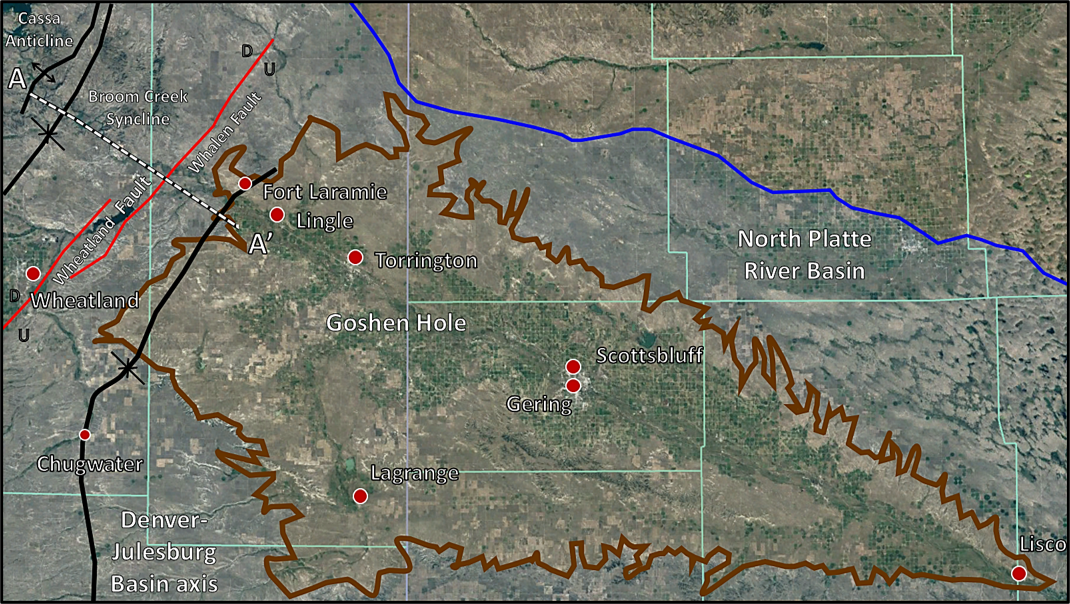 Major structural features of the northern Denver-Julesburg basin, Wyoming, and Nebraska. Cross section AA’ location shown by black and white dashed line.
Image: After Google Earth and Libra, R.D., Collentine, M., and Feathers, K.R., 1981, Volume VII-A Occurrence and Characteristics of Ground Water in the Denver-Julesburg Basin, Wyoming: U.S. Environmental Protection Agency Report, Fig. II-3, p. 17; http://library.wrds.uwyo.edu/occurrences/Volume_VII-A_-_Denver-Julesburg_Basin.pdf.
The north to south structural axis of the Denver-Julesburg basin bends to the northeast between Chugwater and Wheatland. The northeastern-trending Wheatland-Whalen fault system is in the vicinity of the directional change. The Whalen fault has 4,800 feet of reverse displacement (upthrown on southeast side of fault) in the Paleozoic rock in the subsurface, but 300 to 700 feet of normal displacement (downthrown on southeast side of fault) in the Tertiary strata at the surface. This indicates two episodes of movement: northwest thrusting during Laramide orogeny, and southeast down-dropping normal faulting during the post-Miocene collapse of the Rockies.

Structural cross section AA’, Hartville Uplift to Denver-Julesburg Basin. Pre-Tertiary strata are eastward dipping west of the basin axis and nearly horizontal on the east side of the basin. Location of section is shown by black & white line in images above and map below.
Image: After Google Earth and Libra, R.D., Collentine, M., and Feathers, K.R., 1981, Volume VII-A Occurrence and Characteristics of Ground Water in the Denver-Julesburg Basin, Wyoming: U.S. Environmental Protection Agency Report, Fig. II-4, p. 19; http://library.wrds.uwyo.edu/occurrences/Volume_VII-A_-_Denver-Julesburg_Basin.pdf. 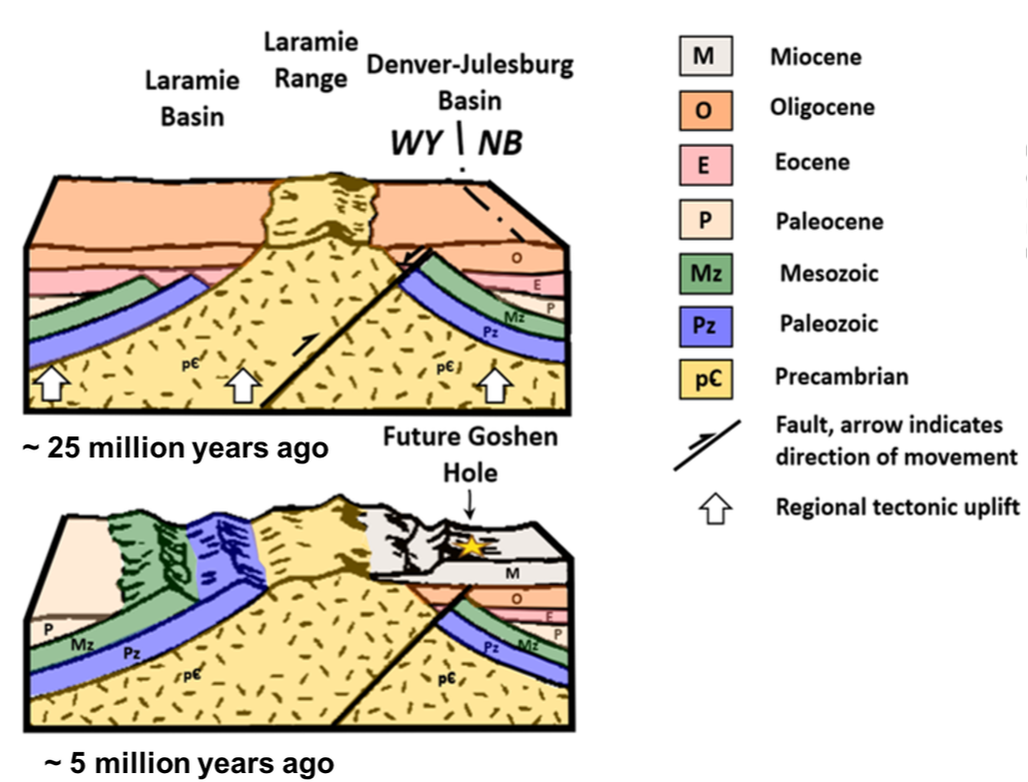 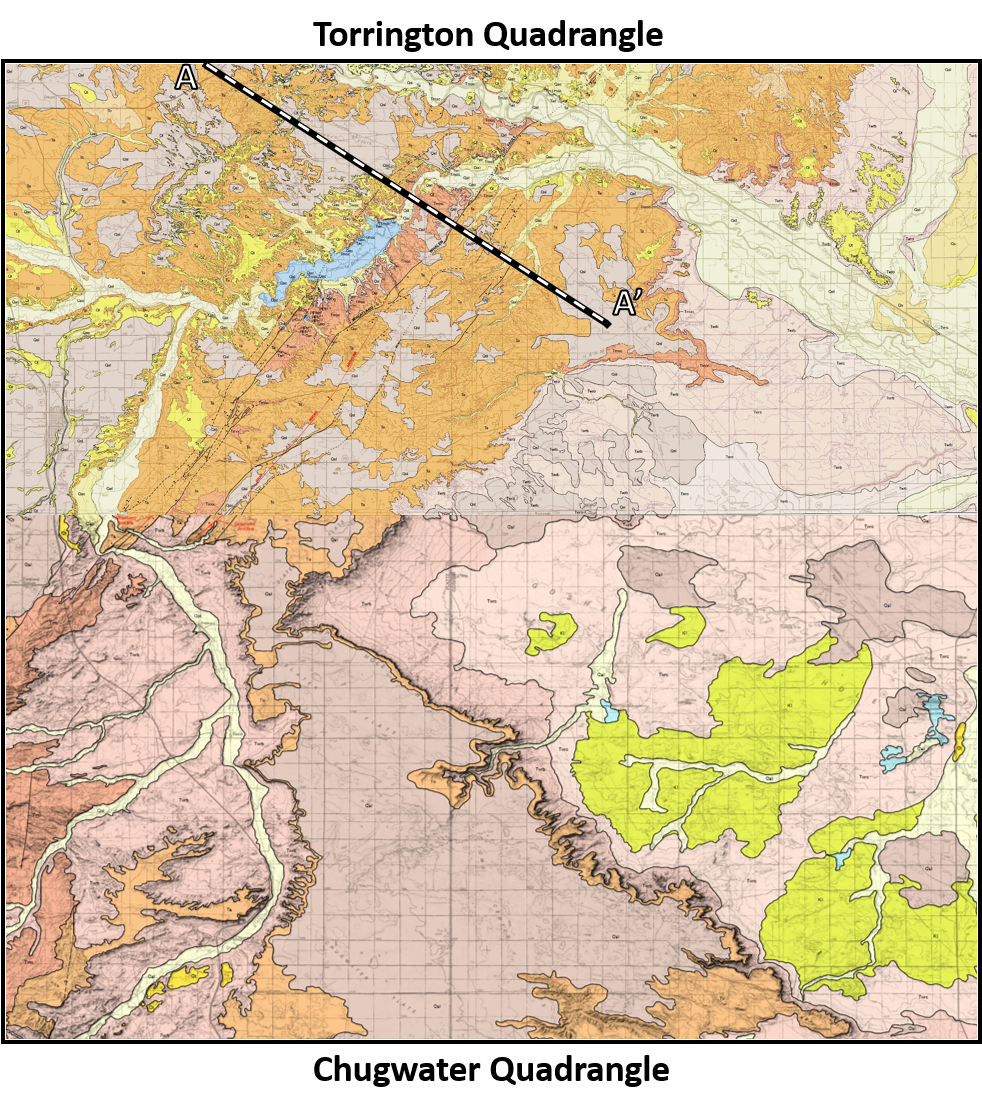 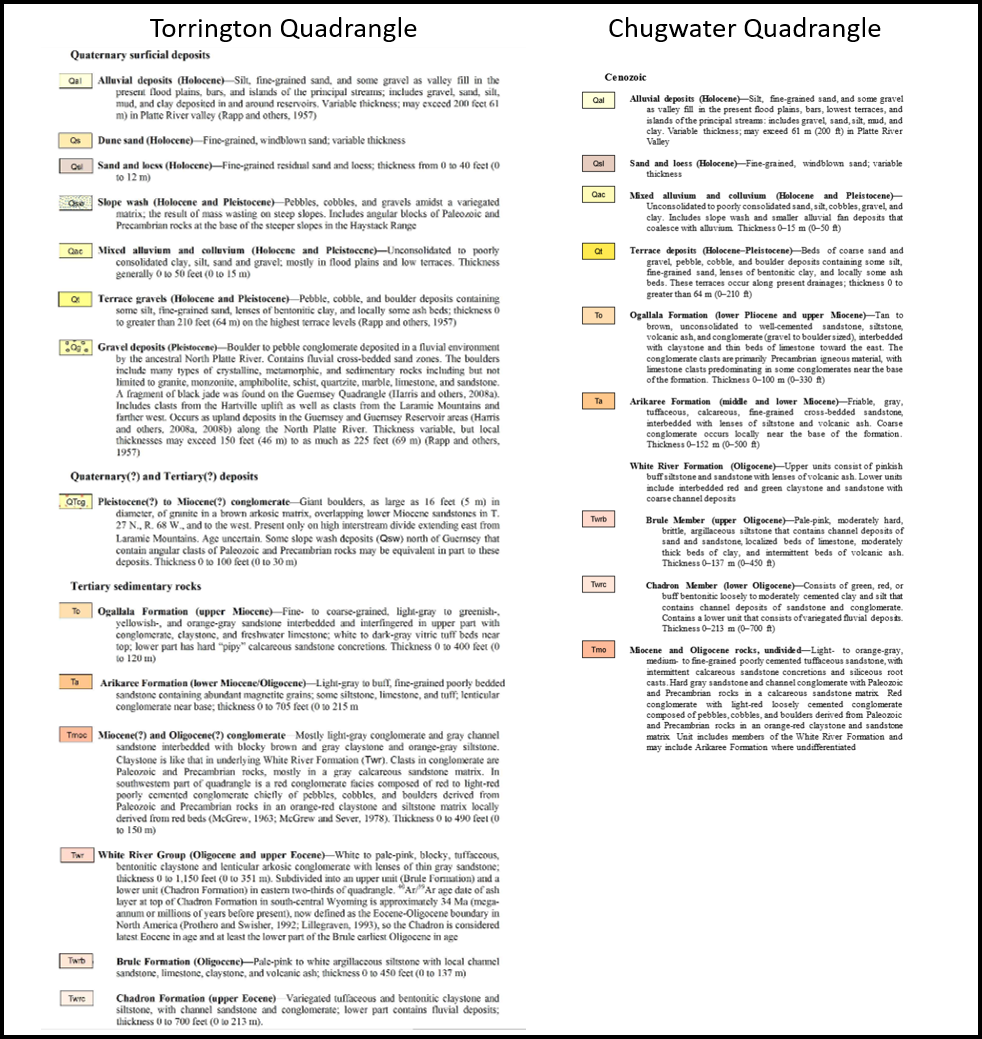 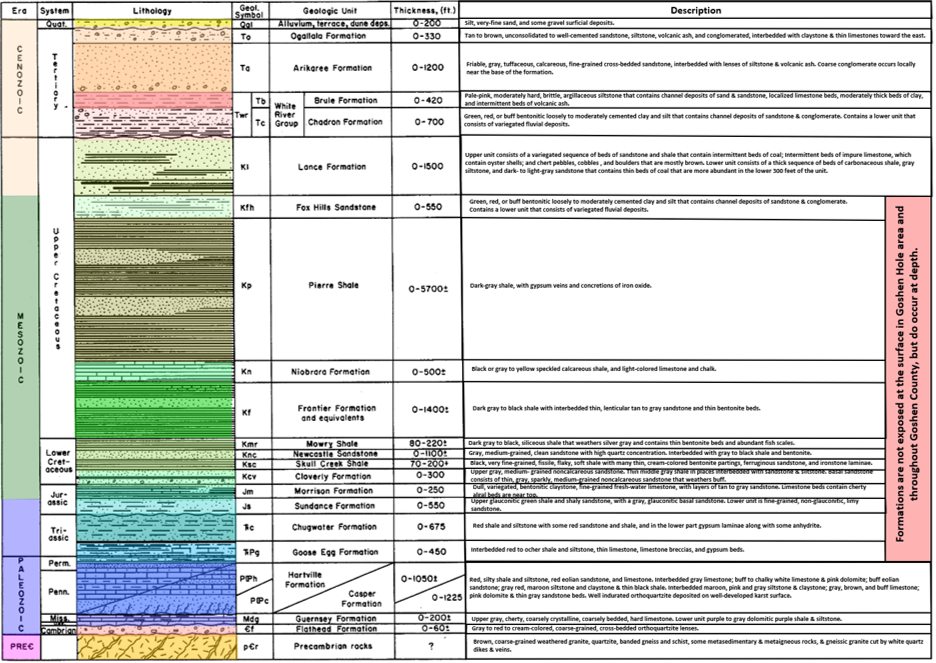 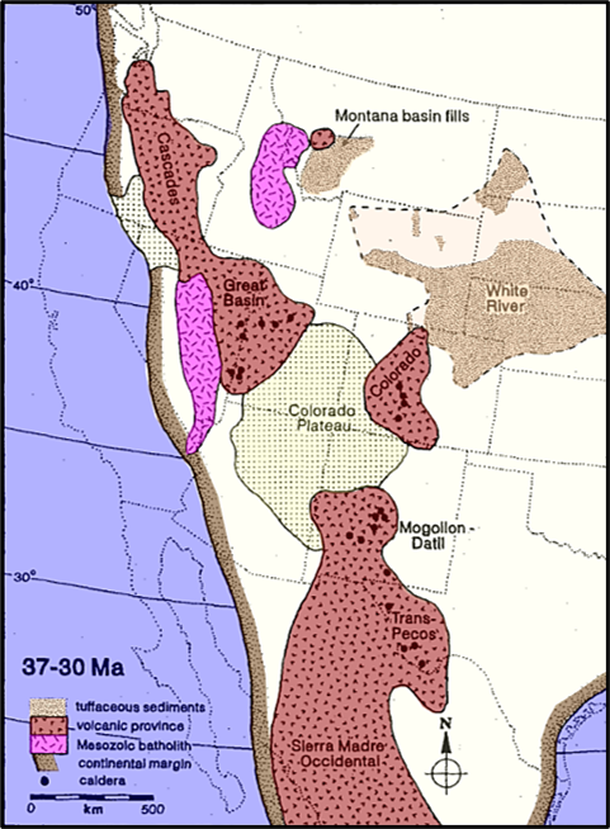 Reconstruction of the central portion of North America, showing the active volcanic provinces between 37 and 30 million years ago, during the deposition of the White River sequence. Most of the White River tuffs were derived from the Great Basin, indicating west-southwest prevailing winds during the latest Eocene and early Oligocene. Only some of the larger known calderas are indicated.
Image: After Larson, E.E. and Evanoff, E., 1998, Tephrostratigraphy and source of the tuffs of the White River sequence:  in Terry, D.O., LaGarry, H.E., Hunt, R.E., Jr., Geological Society of America Special Paper 325, Fig. 5, p. 10; https://www.nrc.gov/docs/ML0911/ML091120799.pdf.

The geologic origin of Goshen Hole is obscure because there is no perennial east flowing stream that extends to the western escarpment.  Two versions for the development of the lowland are the main models for this erosion: 1) headward erosion by spring sapping and seepage erosion, and 2) eastward flood surge from the Laramie Basin. Geomorphic processes in both models involve the headward migration of the escarpment (west). 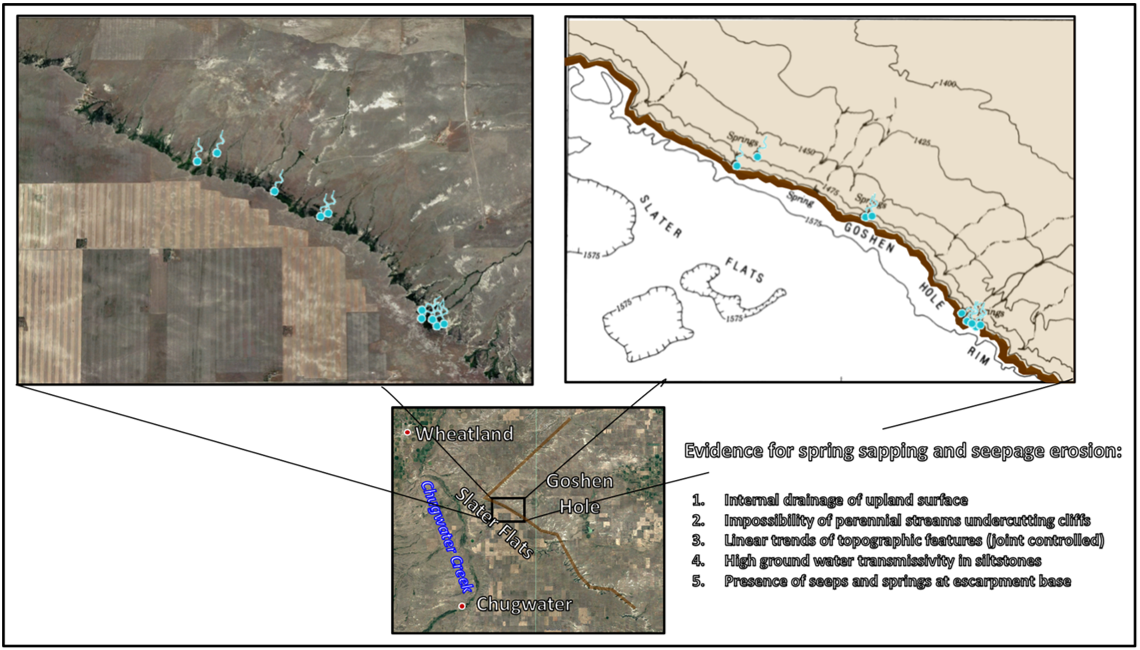 Western Goshen Hole Escarpment rim in the Slater Flats area (brown line). Evidence supporting the spring sapping model for Goshen Hole origin model is listed, bottom right.
Image: Left: Google Earth; Right: After Higgins, C.G., Osterkamp, W.R., and Higgins, C.G., 1990, Seepage-induced cliff recession and regional denudation; in Higgins, C.G. and Coates, D.R., Groundwater Geomorphology; The Role of Subsurface Water in Earth-Surface Processes and Landforms: Geological Society of America Special Paper 252, Fig. 5, p. 295.
The first model involves normal geologic processes of groundwater flow through the softer siltstone of the White River Formation and emerges at the surface near the base of the escarpment as a seep or spring. The resistant sandstone cap of the Arikaree Formation armors the Goshen Rim. The perennial streams are oriented into the lowland of Goshen Hole. Seasonal freeze-thaw of the water erodes the base of the scarp, generally along joints.

The second model does not dispute spring sapping and seepage erosion but holds that the shape and size of Goshen Hole cannot be the result of those processes alone. Rather it notes that several streams in the Laramie basin, to the west, carve through the mountains and converge in the Denver-Julesburg Basin near Goshen Hole. These canyons were the conduits for catastrophic flood water to erode the lowland. The source for the water is not identified. This erosion model requires a large volume of water to form the lowland. Pleistocene glaciation did not occur in the Laramie Range, and the size of the Snowy Range alpine glaciers are insufficient as a water source. There is no evidence for glacial lakes within the Laramie Basin that could flood the area like Lake Missoula did to create the Washington Scablands.
​
The creation of Goshen Hole lowland region is as unclear as is the origin of the place name. 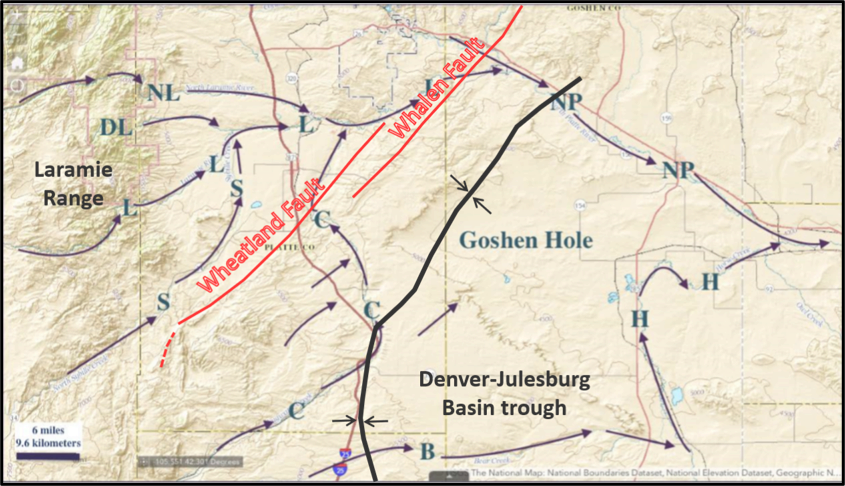 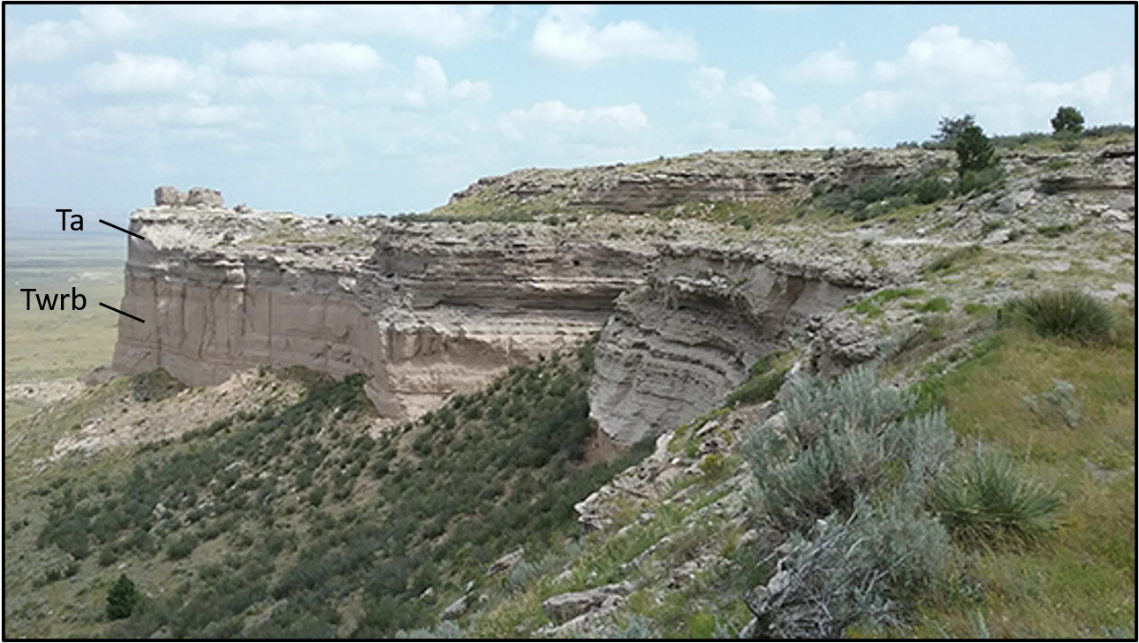