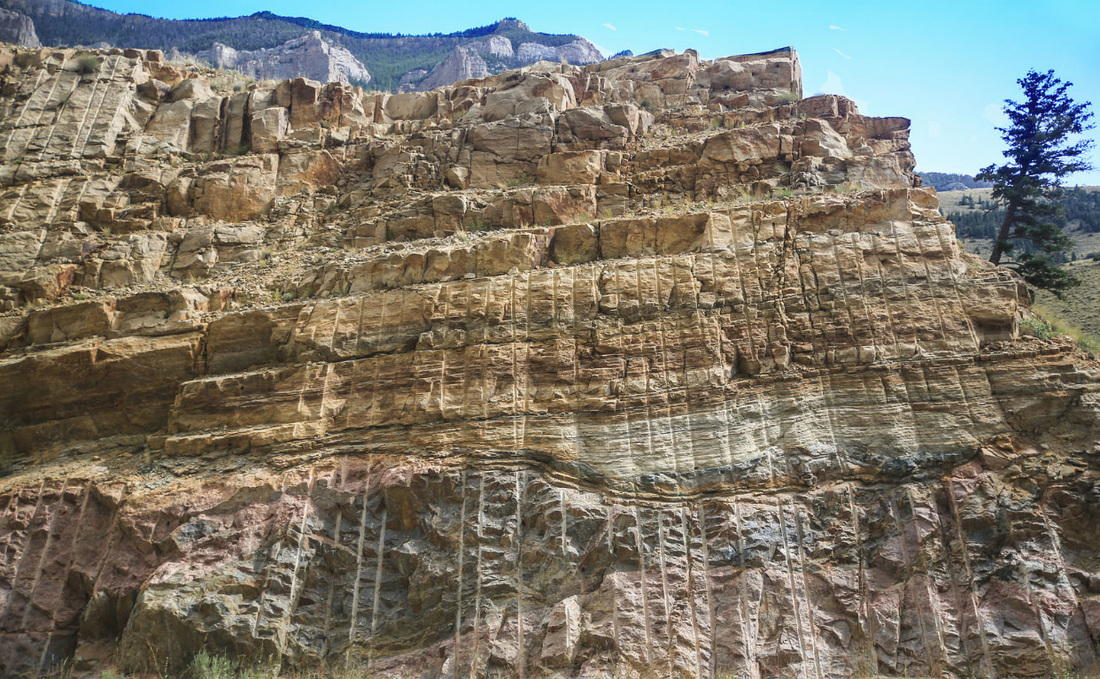 ​Place your hand on The Great Unconformity!  The contact between the Precambrian igneous/metamorphic crystalline rock (2.6 to 2.8 billion years old) and overlying Cambrian Flathead Sandstone (520 million years old) is a 2 billion year gap in the rock record. Very scenic walk or bike ride up Shoshone Canyon.

Geology of The Great Unconformity

The Great Unconformity was first recognized by John Wesley Powell during his 1869 exploration of the Grand Canyon.  In the Grand Canyon, sedimentary 525 million year old Tapeats Sandstone lies on metamorphic 1.740 billion year Vishnu Schist, a time gap of over 1.2 billion years. Powell understood that this surface represented an immense period of time, but lacked the tools to obtain accurate ages. 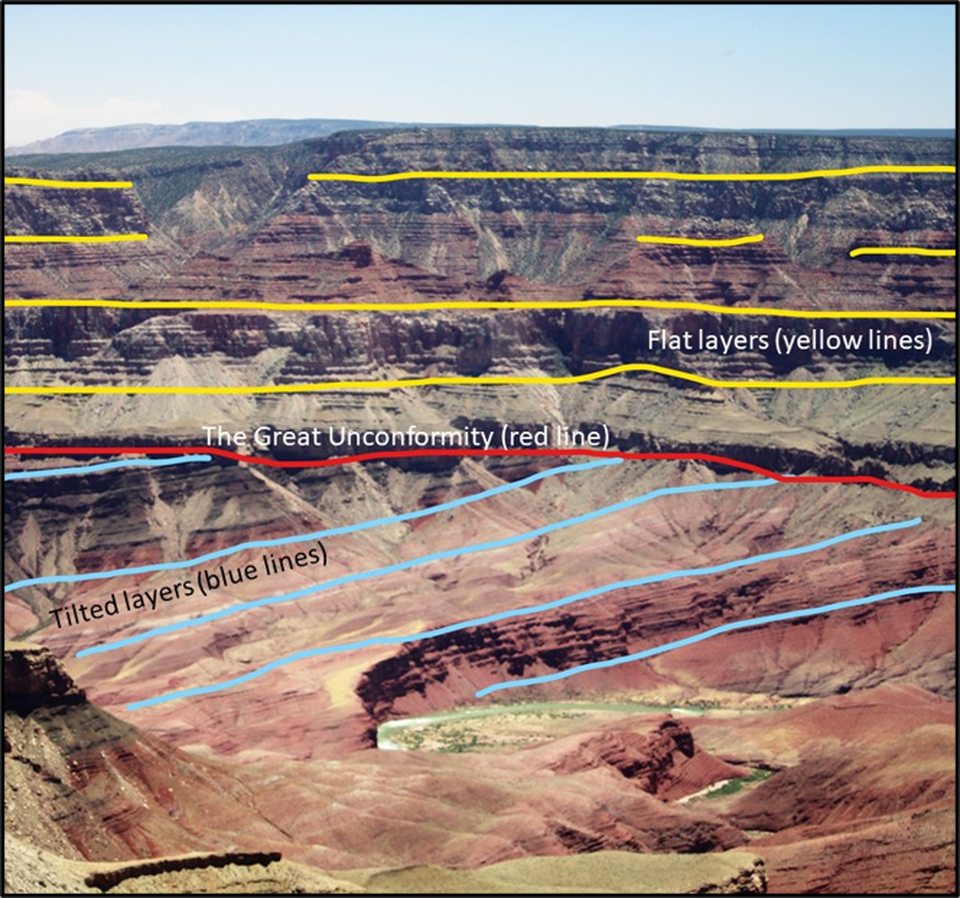 Grand Canyon Great Unconformity (red line) from Walhalla Plateau
Image by Ann Scott, USGS, https://www.usgs.gov/science-support/osqi/yes/national-parks/grand-canyon-geology​
​This “missing time” between the ancient earth and the Phanerozoic Eon (< 542 million years ago) is found worldwide. In Shoshone Canyon it can best be observed just before Tunnel #1 (the first one when heading west) on U.S. 14-16-20. Cross bedded Cambrian Flathead Sandstone (520 million years) rests on Precambrian igneous (2.65-2.6 billion years) and metamorphic crystalline rock (2.80-2.75 billion years). The time gap of from 2.08 to 2.28 billion years is about twice as long as that seen in the Grand Canyon and almost half the age of the earth. 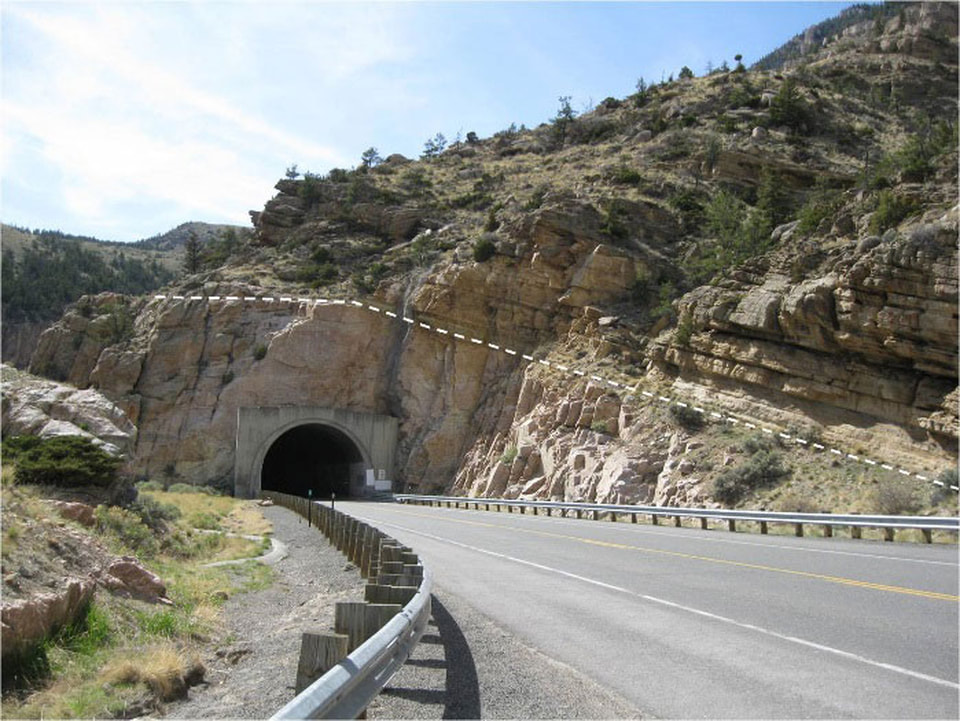 Shoshone Canyon west view at Tunnel #1. Unconformity shown by white dashed line.
Image from: Fisher, M.P., 2016, Shoshone Canyon
The reason for this “greater” Great Unconformity is that the basement rock of Wyoming represents the oldest continental crust in the Rocky Mountain Region and some of the first to crystallize as the molten earth cooled. The crystalline rock in Shoshone Canyon is part of the Archean Wyoming craton, an ancient land mass that underlies most of Wyoming and parts of the adjacent states. The Wyoming cratonic core segments MMP, BBM, SWT assembled through collision driven by plate tectonics in the middle Archean (3.2-2.8 billion years). They joined with the other subprovince bits HU-BH and SAT to create a micro-continent 2.65 billion years ago. It remained an independent “micro-continent” for at least 750 million years.
​A fingertip can span the Archean-Phanerozoic unconformity, a time gap when amazing things occurred in earth’s crustal evolution.  Beginning about 1.9 billion years ago, Wyoming amalgamated with other Archean crustal blocks to establish the core of the North American continent (aka. “Laurentia” or the “United Plates of America”).
The Grenville Orogeny occurred 1.3 billion years ago, when the Eurasian and African continents collided with North America to form the Appalachian Mountains and the first “super continent” Rodinia (Russian for “Motherland”). Wyoming was located at the center of the resulting land mass that stretched pole to pole. Several significant events in earth evolution occurred during the existence of Rodinia: 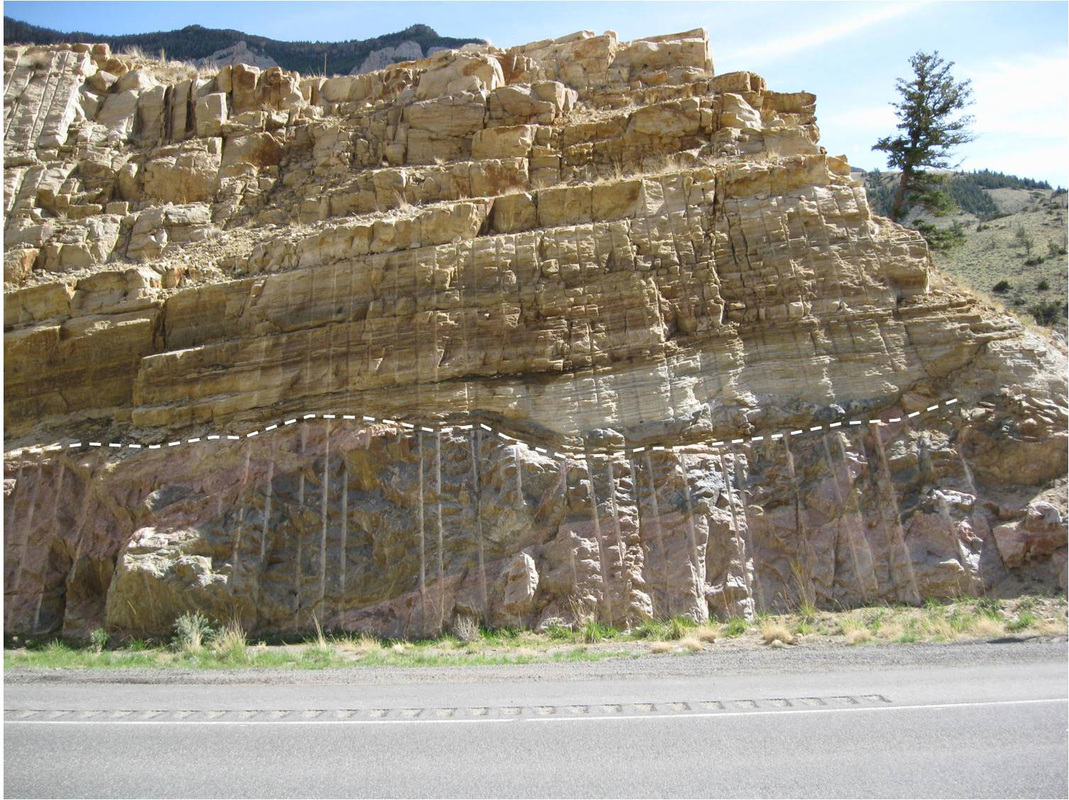 Origin of "The Great Unconformity"

The cause of “The Great Unconformity” is one of the major unsolved questions of geology. Why is there such a long gap in the rock record that occurred worldwide during this specific time? Many rocks found immediately below “The Great Unconformity” are igneous or metamorphic in origin and crystallized at great depth and pressure. Rocks above "The Great Unconformity" are sedimentary in origin, contain fossils and were deposited on the surface of the earth.  Significant uplift and erosion of perhaps 3 to 5km of the Precambrian igneous rocks occurred before the overlying sedimentary rocks were deposited.

​There are two competing thoughts: 1) uplift and erosion occurred due to episodic plate tectonic events where continents collided, merged, and separated, or 2) the massive worldwide glaciation during Snowball Earth (717 to 635 million years) caused significant erosion. The beauty of the glaciation model is it explains how you can have significant erosion in the center of stable cratons like North America. Plate tectonics can explain significant erosion at plate margins, but not in stable craton interiors.  (Kalin T. McDannell, C. Brenhin Keller , William R. Guenthner , Peter K. Zeitler, and David L. Shuster, 2021, Thermochronologic constraints on the origin of the Great Unconformity, in Proceedings of the National Academy of Sciences of the Unites States of America, PNAS 2022 Vol 119, No. 5, https://www.pnas.org/doi/10.1073/pnas.2118682119)

What you will see at The Great Unconformity

Coarsely crystalline pink granite and black gneiss below the contact and buff to tan colored coarse grained sandstone above the contact.  When the Cambrian seas flooded the exposed granite and deposited sands in a beach to shallow marine setting, there were no land plants or land animals.  Life only existed in the ocean.  The shoreline was stark and desolate without vegetation. Study of the Precambrian-Cambrian contact in Sunlight Basin 20 miles to the northwest suggests the Precambrian surface had some relief with the likely existence of granite islands along that rocky coast.

Directions to The Great Unconformity

Starting at the intersection of US 14-16-20 (Sheridan Ave) and US 14A (16th St) in downtown Cody, head west toward Yellowstone on US 14-16-20. Travel through town, 0.8 miles Buffalo Bill Center of the West, 2.8 miles Old Trail Town, 3.2 miles Rodeo Grounds – Stampede Park, 5.1 miles Hayden Bridge – Bureau of Reclamation Road (walk - see below), 5.7 miles bridge over Shoshone, 6.4 miles pull-off and park on right side of highway just before the first short tunnel, cross highway to south side and touch The Great Unconformity. 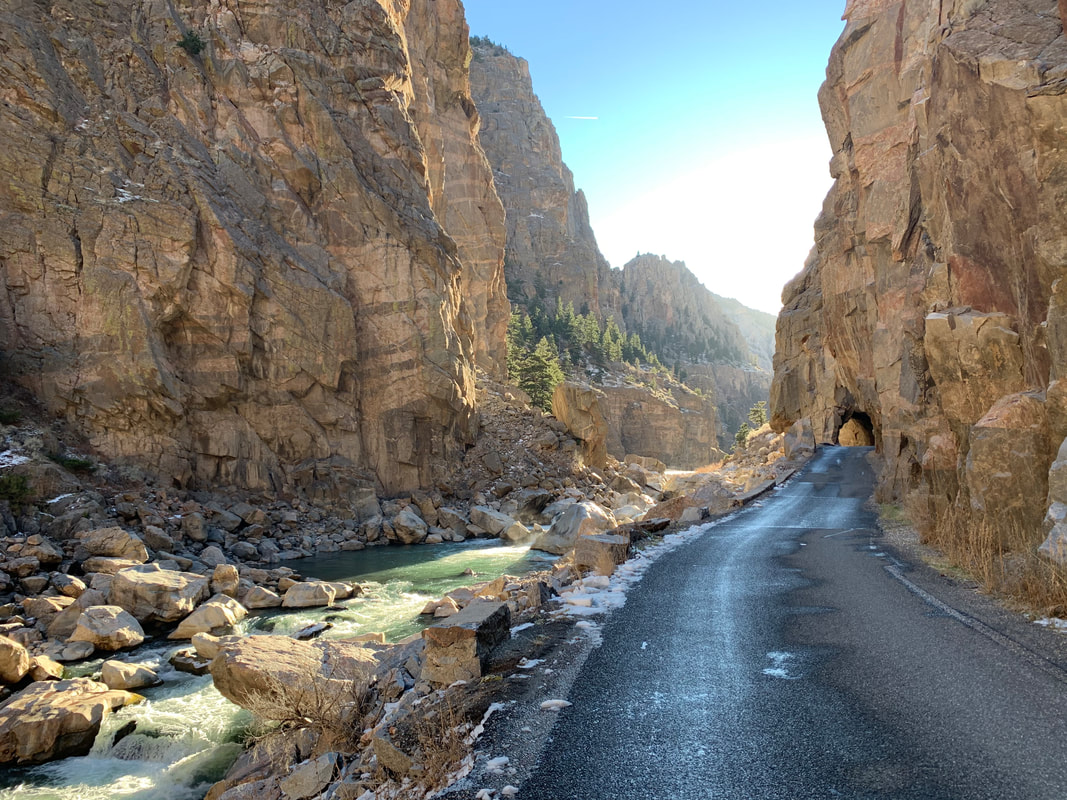 Shoshone Canyon walk below Buffalo Bill Dam
Image by Mark Fisher
Certainly the most scenic walk or bike ride close to Cody is on the Bureau of Reclamation road up the Shoshone Canyon toward the dam.  Starting at the Hayden Bridge parking area, it is an out and back four mile total walk that will take about 1-1/2 hours to complete. Elevation gain is only about 200 feet.  You are adjacent to the Shoshone River and on pavement the whole way.  For some unknown reason, you will only see a handful of people enjoying this gem at any one time.  For rock climbers, there are a number of bolted climbing routes once you reach the granite.  (https://rootsrated.com/cody-and-east-yellowstone-wy/climbing/lower-granite)

​Starting at the intersection of US 14-16-20 (Sheridan Ave) and US 14A (16th St) in downtown Cody, head west toward Yellowstone on US 14-16-20. Travel through town, 0.8 miles Buffalo Bill Center of the West, 2.8 miles Old Trail Town, 3.2 miles Rodeo Grounds – Stampede Park, 3.6 miles pull-off on right for Demaris Hot Springs (see geowyo Cody Hydrothermal System website), 5.1 mile turn right at Hayden Bridge Road – Bureau Reclamation Road, 5.2 mile Hayden Bridge.  Vehicle access allowed for the first mile of the road Monday through Thursday, 7:00 AM to 4:00 PM.  All other times it is pedestrian/bicycle daily use starting at Hayden Bridge.  Dogs allowed.  The walk begins at Hayden Bridge in strata of the lower Big Horn Formation which is a carbonate aquifer. After about a tenth of a mile, near the base of the resistant bedded carbonate rocks and just above the top of the soft shales of the Cambrian Gros Ventre, look in the ditch on the right for unusual greenish-grey carbonate rocks made of flat pebbles. They formed in shallow marine water where currents ripped up these clasts from a carbonate mud flat while still soft. The next mile is mostly river gravels on the right and the covered slope of Cambrian shales.  Across the river and under the highway bridge is an exposure of Cambrian shales with a small fold. The white cliffs below the top of Cedar Mountain are from top down, Pennsylvanian Tensleep Sandstone, Mississippian Madison Formation and Ordovician Big Horn Formation.  At one mile, you will reach the junction with an access bridge to the Spirit Mountain power plant (closed to the public).  At 1.1 mile on the right is an outcrop of bedded Cambrian Sandstone sitting unconformably on the Precambrian granites.  Across the river and behind the power plant is another good exposure of this same Great Unconformity.  The scenery gets special as the road continues along the river another mile in Precambrian granites.  You will go through the first tunnel at 1.6 miles after which the road forks.  The left fork follows along the river for another 0.3 miles until you reach a second tunnel where you can go no further.  If you take the right fork after the first tunnel, the road climbs 0.4 miles and 350 vertical feet up toward the dam visitor center.  There is no access to the Buffalo Bill Dam Visitor Center from this direction (see geowyo Buffalo Bill Dam website).