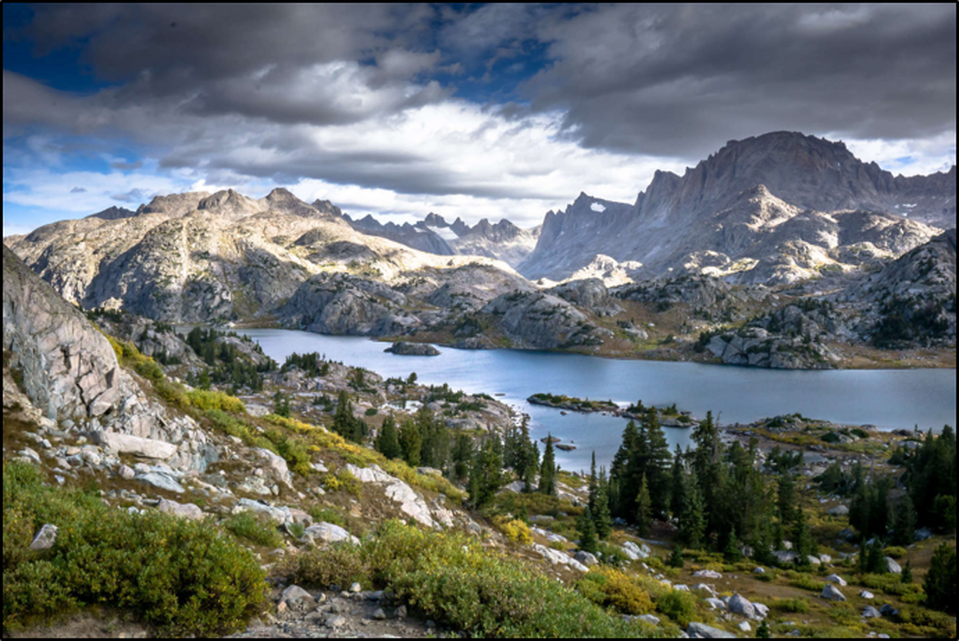 Hidden deep in the Wind River Mountains, this alpine valley surrounded by 13,000 foot peaks is a premier hiking and climbing destination. It has lakes, glaciers, wildlife, wildflowers, solitude and lots of rocks! A true “bucket list” adventure.
Harold A. Titcomb graduated from Columbia School of Mines as a mining engineer in 1898. He began his career as an assistant superintendent for the Carissa gold mine at South Pass. His younger brother Charles was also employed and helped with mine surveys. The brothers spent their off hours hiking and climbing in the Wind River Range. They are the namesake for the Titcomb Basin, Lakes, and Needles. Together they made an ascent of Fremont Peak in 1901, the first men to stand on the summit since John C. Fremont stood in 1843. 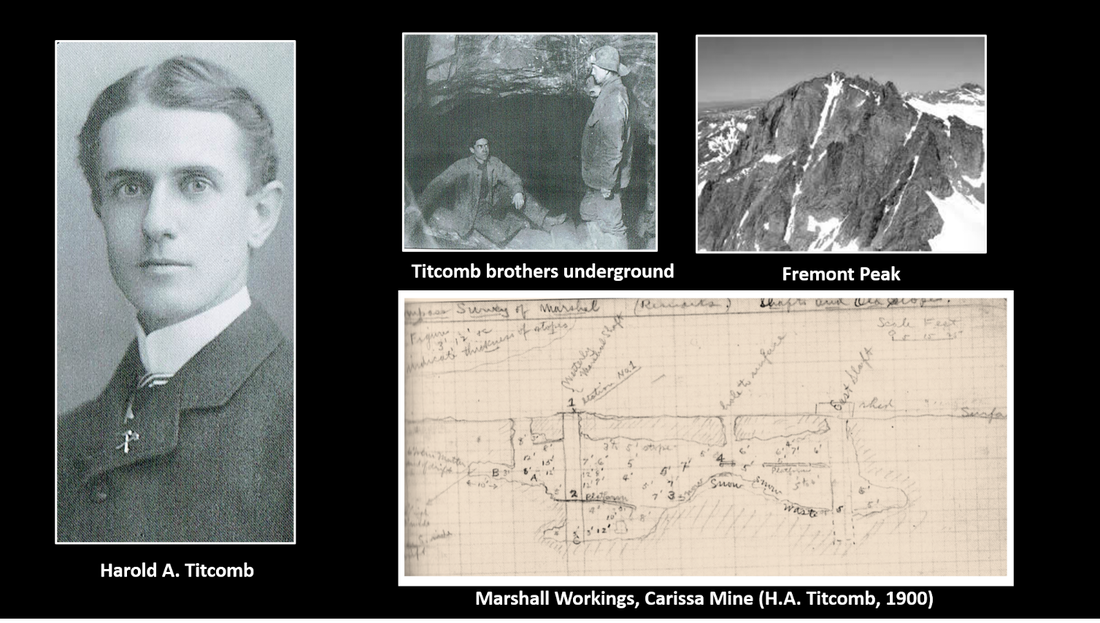 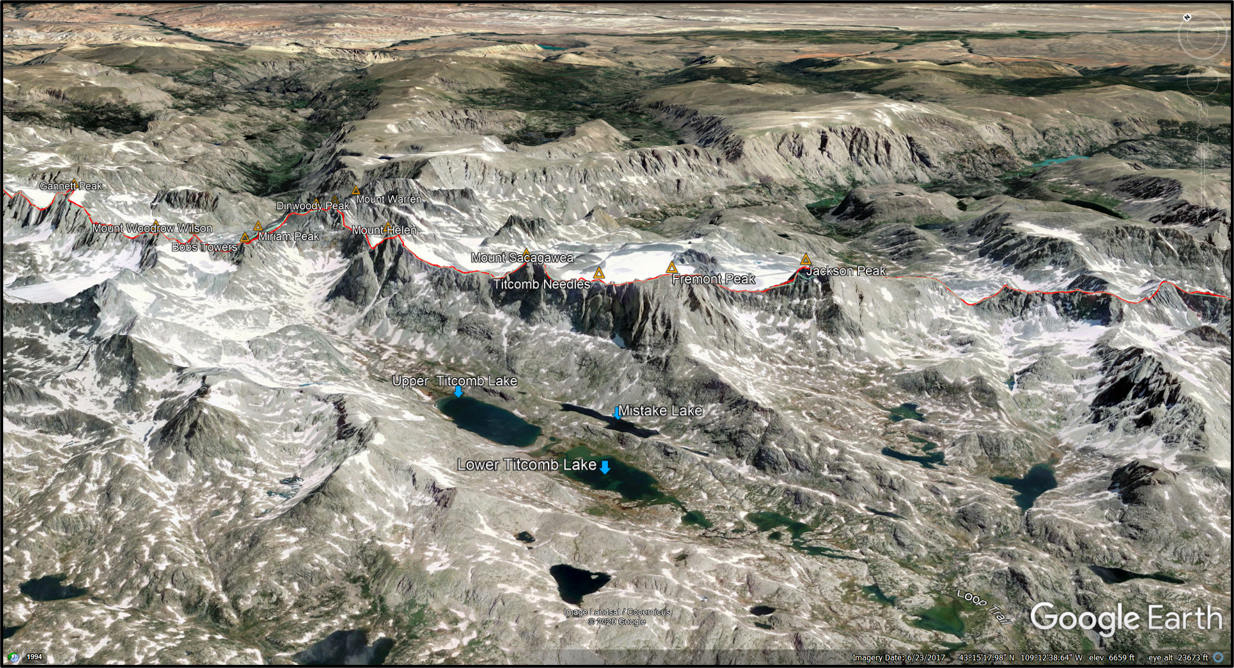 The basement rocks of the Wind River Range consist of ancient Archean granites, gneisses, and meta sedimentary units. Inclusions of zircon minerals within the rocks are dated at 3.82 billion years ago (Ga) indicate that Hadean crust (>3.8 Ga) was present in the area prior to the formation of gneiss or granite. During the late Archean, the western edge of the Wyoming craton was an active geologic margin. The regions geologic history is dominated by 250 million years of intrusion, five deformation events, and at least four periods of metamorphism (Frost, et al, 2000). 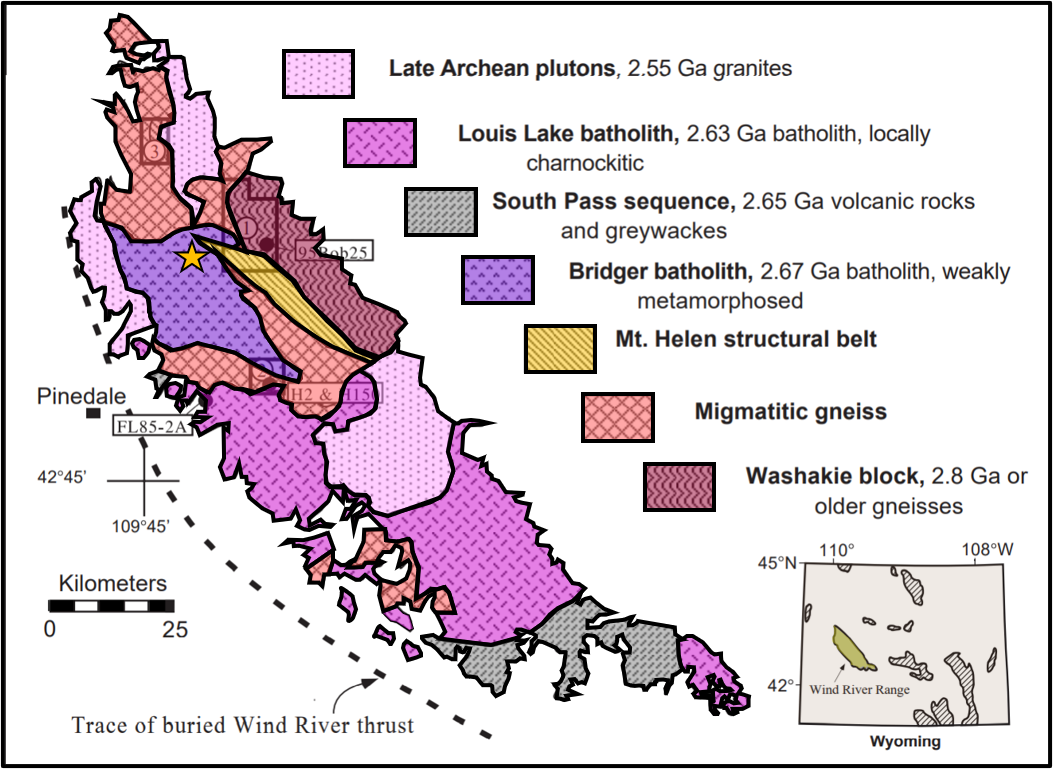 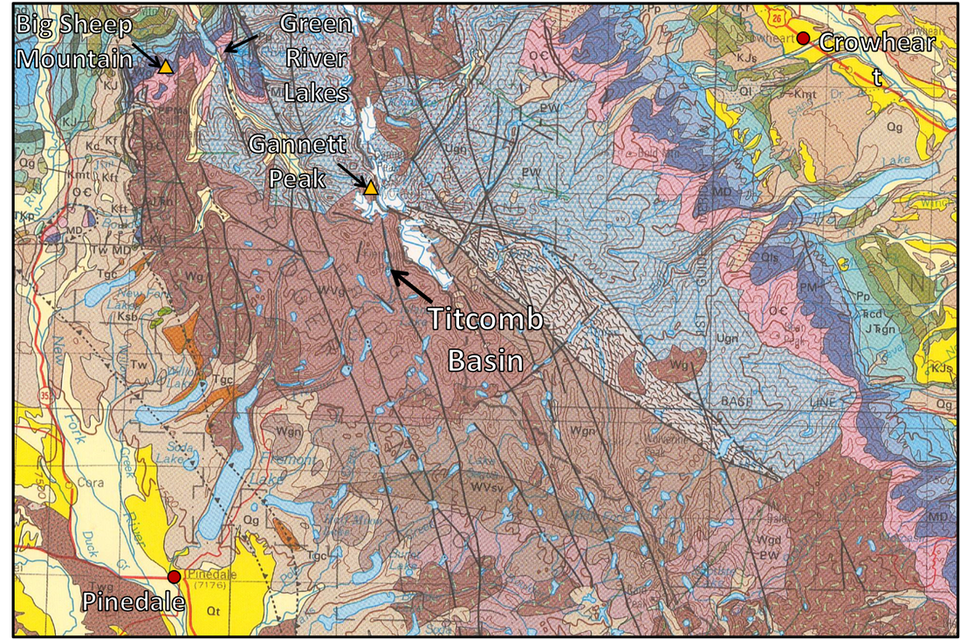 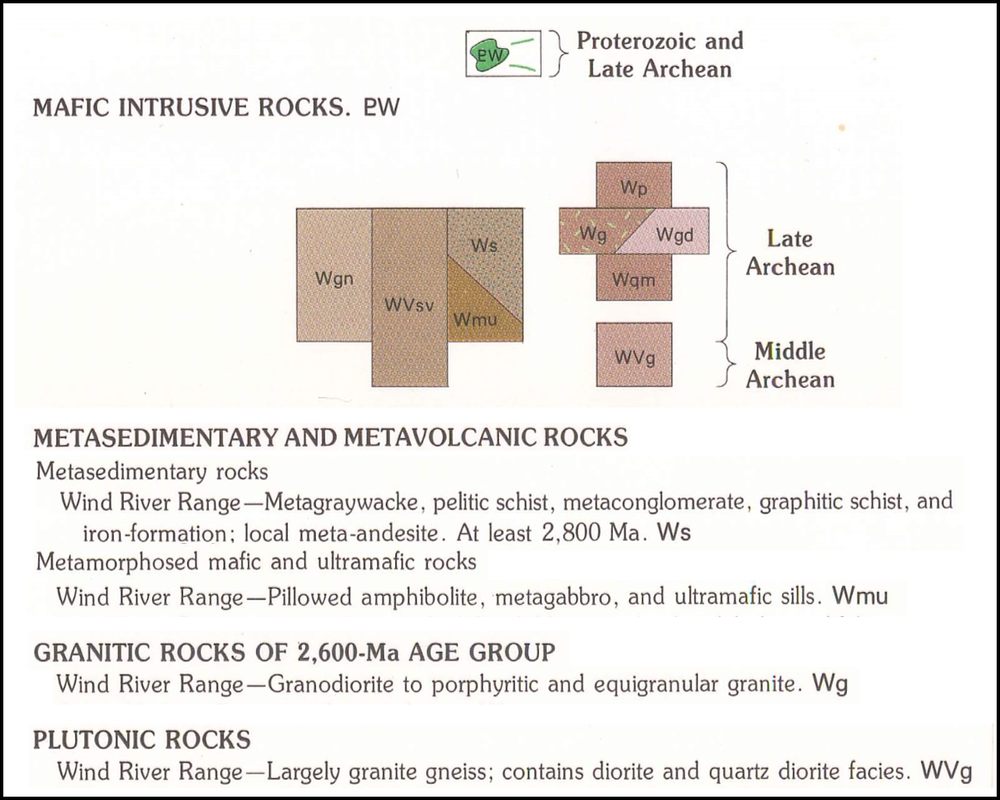 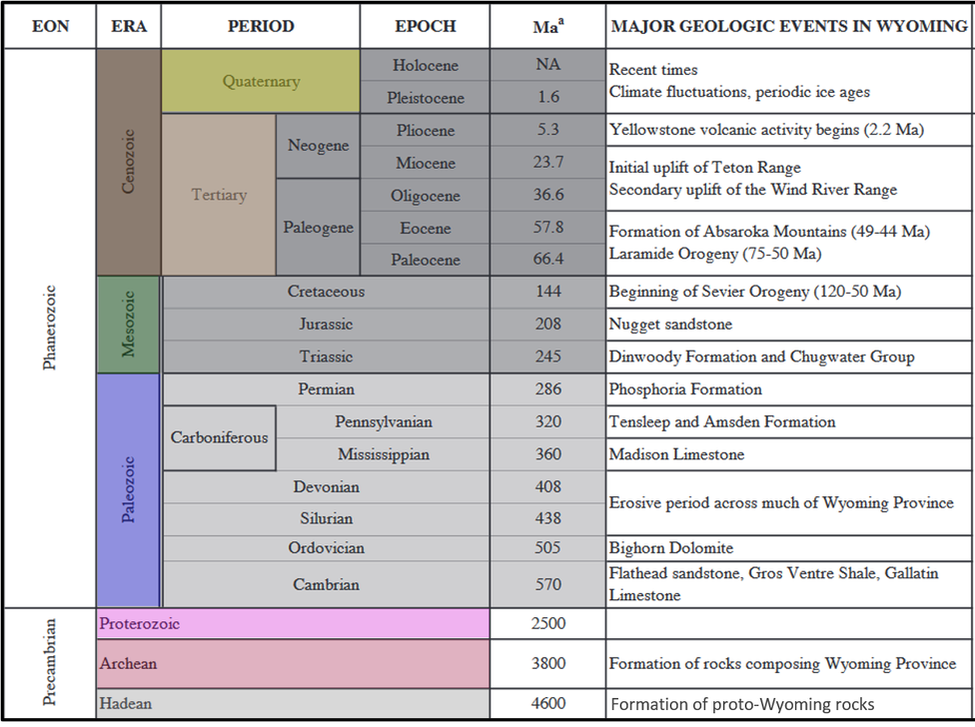 Structural cross section FF’ across Titcomb basin area, Wind River Range. West is on the left with the deep Green River Basin. East is on the right with just the edge of the Wind River Basin. The gray is Precambrian, the blue is Paleozoic, the green is Mesozoic, and the beige is Tertiary.
​Image: After Blackstone, D.L., Jr., 1993, The Wind River Range, Wyoming: An Overview: Wyoming Geological Society Jubilee Anniversary Field Conference Guidebook: Wyoming Geology, Past, Present, and Future, Fig. 7, p. 126. 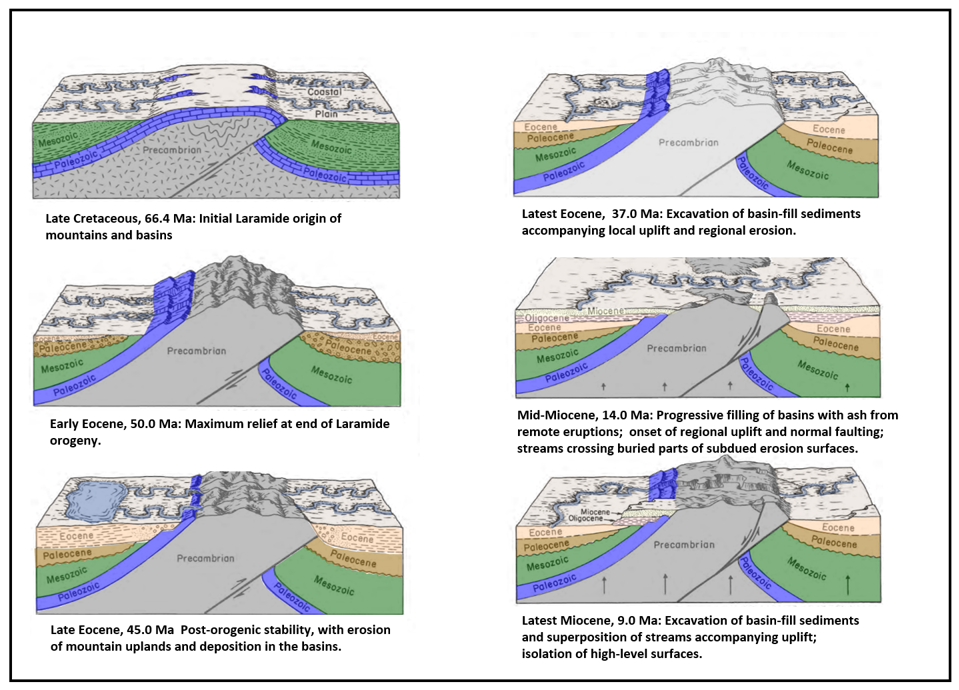 Evolution of Post-Laramide Wyoming topography. In the specific case of the Wind River Mountains, the Wind River Basin is on the left, the Green River Basin is on the right and the mountains are in the middle.
​Image: After Mears, B., Jr., 1993, Geomorphic  history of Wyoming and high-level erosion services, in Snoke, A.W., Steidtmann, J.R., and Roberts, S.M., editors, Geology of Wyoming: Geological Survey of Wyoming Memoir No. 5, Figs. 2-7, pp. 613-614; https://www.wsgs.wyo.gov/products/wsgs-1993-m-05.pdf.
​​Laramide tectonism ended in the early Eocene. The mountain uplifts immediately began to erode into the surrounding basins. Volcanic eruptions added a tremendous volume of ash. During the late Eocene, Oligocene and Miocene, sediments progressively filled the basins and draped onto the mountains. Renewed erosion developed the high-level flat surface seen in the Wind River Mountains and other ranges of Wyoming. Canyons were cut by superposed streams. 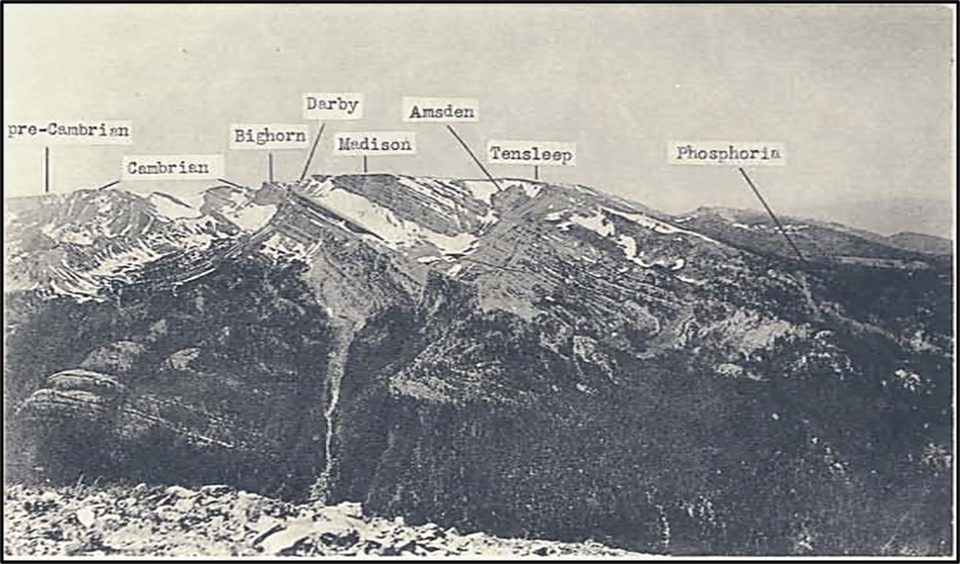 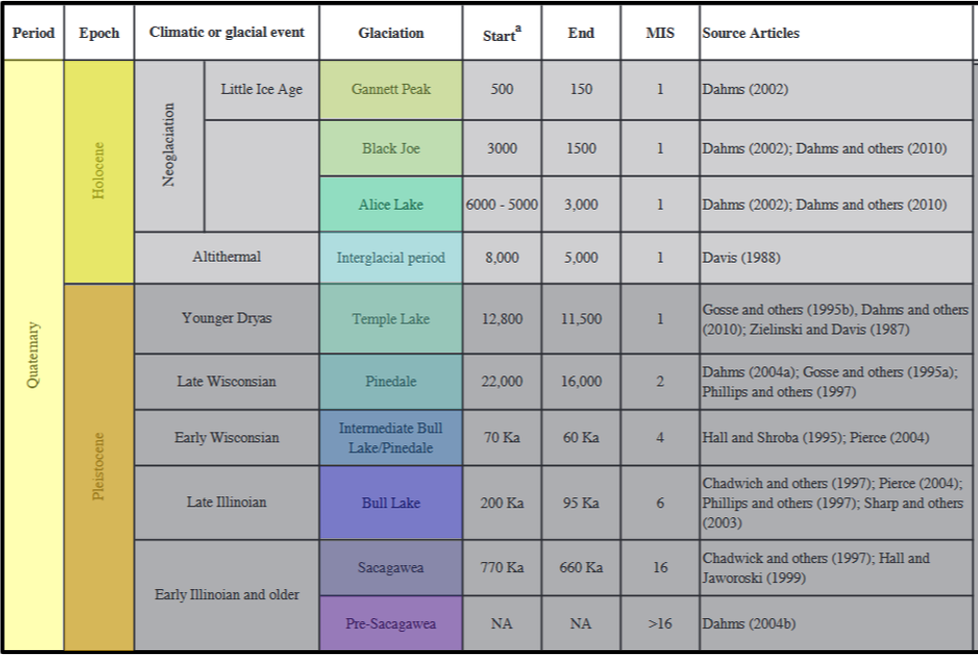 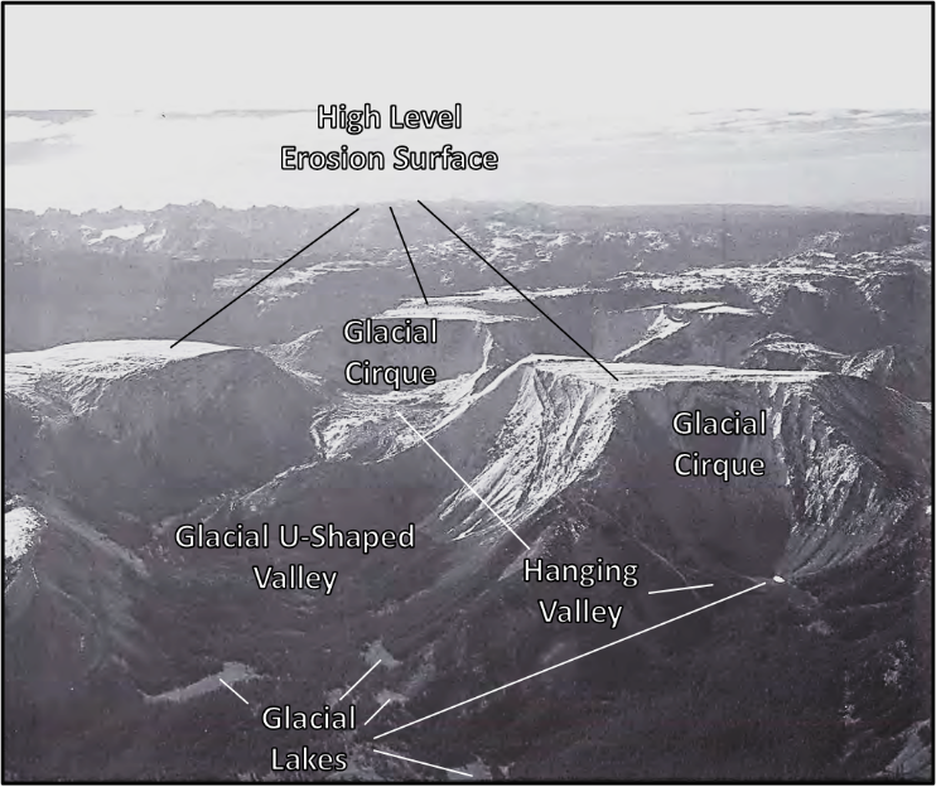 Aerial view of northwestern Wind River Range. The Tertiary high-level erosion surface is at about 11,000 foot elevation in this area. The cirques, hanging valleys, and troughs are the result of Pleistocene glacial carving. This landscape is called “biscuit board topography” for its resemblance to the dough left on the board after the biscuits have been cut. Flat-top mountain in right foreground is Gypsum Mountain, just west of Big Sheep Mountain.
Image: After Lageson, D.R., 1986, from Mears, B., Jr., 1993, Geomorphic history of Wyoming and high-level erosion surfaces; in Snoke, A.W., Steidtmann, J.R., and Roberts, S.M., eds., 1993, Geology of Wyoming: Geological Survey of Wyoming [Wyoming State Geological Survey] Memoir 5, Vol. 2, Frontispiece, p. 608; https://www.wsgs.wyo.gov/products/wsgs-1993-m-05.pdf. 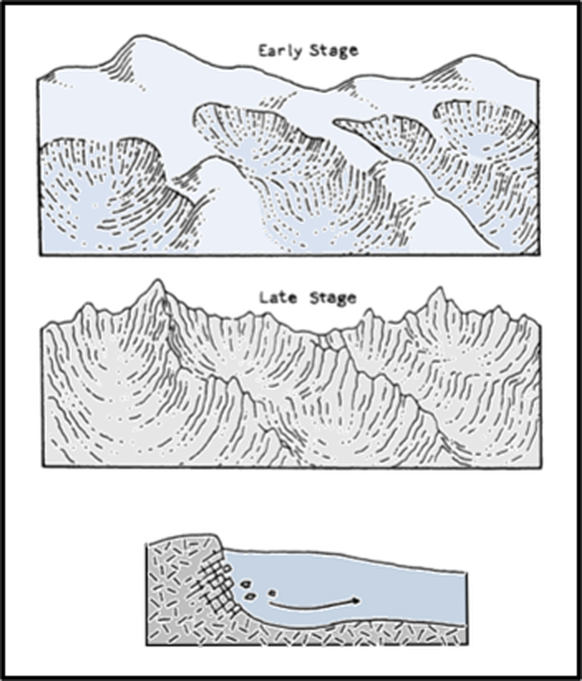 Cirque is a basin (amphitheater) eroded into a mountainside at the head of a glacier, where ice flowing downslope plucks blocks of jointed rock. Diagram shows the formation of cirques and “biscuit board topography.”
​Image: After Guyton, B., 1998, Glaciers of California: Modern Glaciers, Ice Age Glaciers, the Origin of Yosemite Valley, and a Glacier Tour in the Sierra Nevada, Fig. 19, p. 48.

This is an adventure only for the physically fit and you should plan multiple days for the trip. The following two websites have useful maps and insights: Hiking Project and AllTrails.