Scenic highway across the Sierra Madre Mountains, Wyoming. Historic mining area and awesome autumn beauty.
The Sierra Madre Mountains are an underappreciated treasure in southern Wyoming. The mountain range attracts few visitors to enjoy their majesty. The Battle Mountain Byway (WY-70) crosses the range from Encampment to Baggs over the Continental Divide (56-miles). 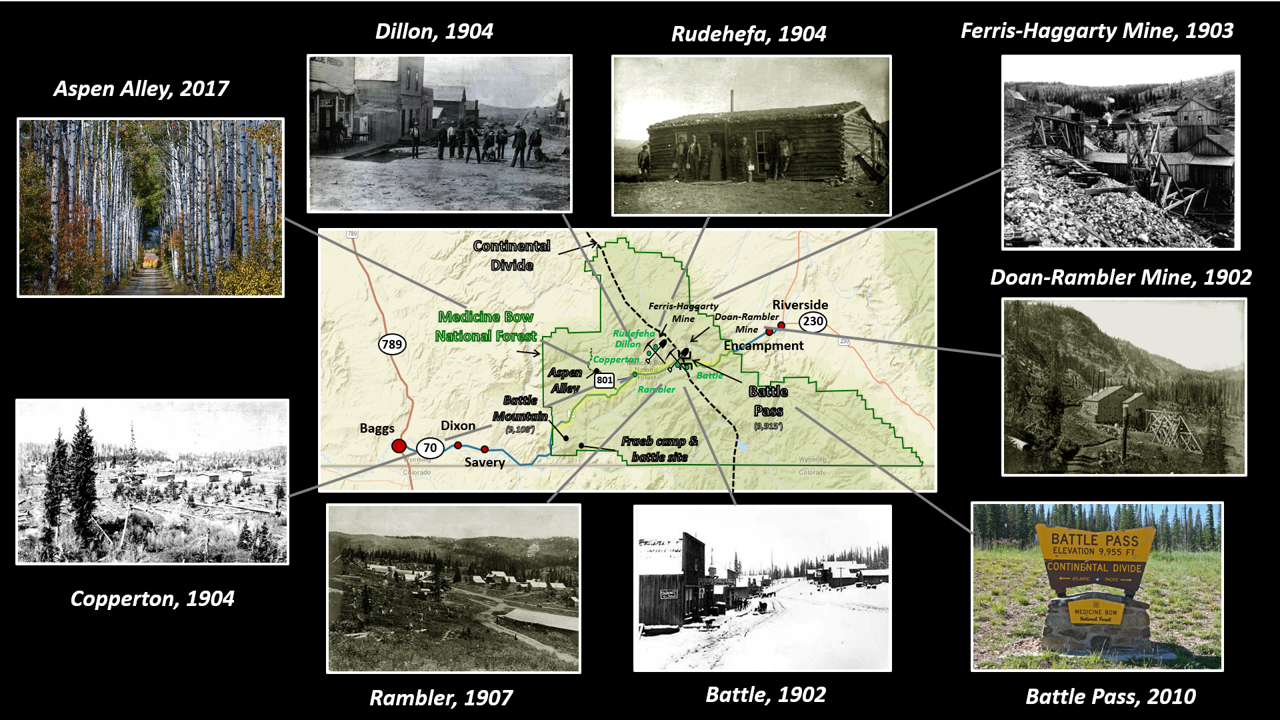 Battle Pass scenic byway, southern Wyoming.
Image: After https://www.wyohistory.org/field-trips/battle-pass-scenic-byway; Battle, Copperton, Dillion, Doan-Rambler Mine, Ferris-Haggerty Mine, Rambler, Rudefeha: http://www.wyomingtalesandtrails.com/; Aspen Alley: https://www.wyomingcarboncounty.com/resources/gallery/1204-aspen-alley-near-saratoga; Battle Pass: Bishop, R., 2010, https://passbagger.org/pb-wy-battle.htm.
The portion of Wyoming Highway 70 that lies within the Medicine Bow National Forest (milepost 22-50) was designated a scenic byway in 2012. The 28-mile route of awesome beauty passes several historical sites, that include Battle Pass, mining ghost towns, and Battle Mountain. Battle Pass crosses the Continental Divide at 9,955 foot elevation. The pass is named after a fierce 2-day battle between about 23 fur trappers and 500 to 700 Sioux, Cheyenne, and Arapaho warriors in 1841. Henry Fraeb’s party camp at the confluence of the Little Snake River and Battle Creek was attacked in the shadow of Bastion Mountain 18 miles southwest of the pass. Fraeb was killed early in the battle and 21-year old Jim Baker took command of the trappers. After the largest fight in the Rocky Mountains between Indians and fur trappers, the mountain was renamed Battle Mountain. The name was applied to other places in the Sierra Madre Range, including Battle Pass, Battle Creek, and Battle Lake. Baker built a cabin in the valley near Savery. He is buried in the family cemetery on a hill overlooking the Littles Snake River valley, and within sight of Bakers Peak, and Battle Mountain. 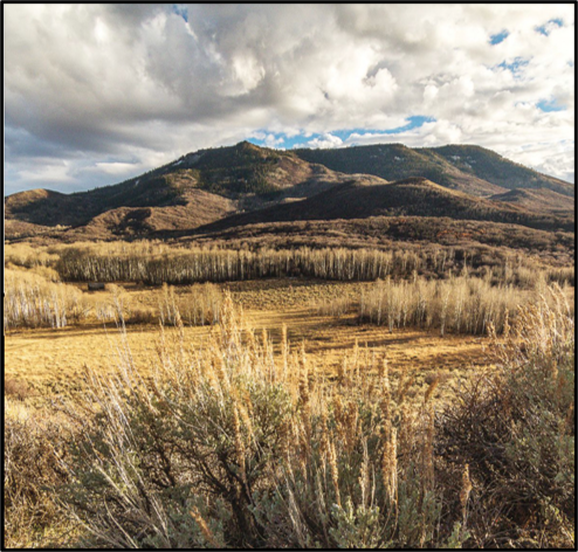 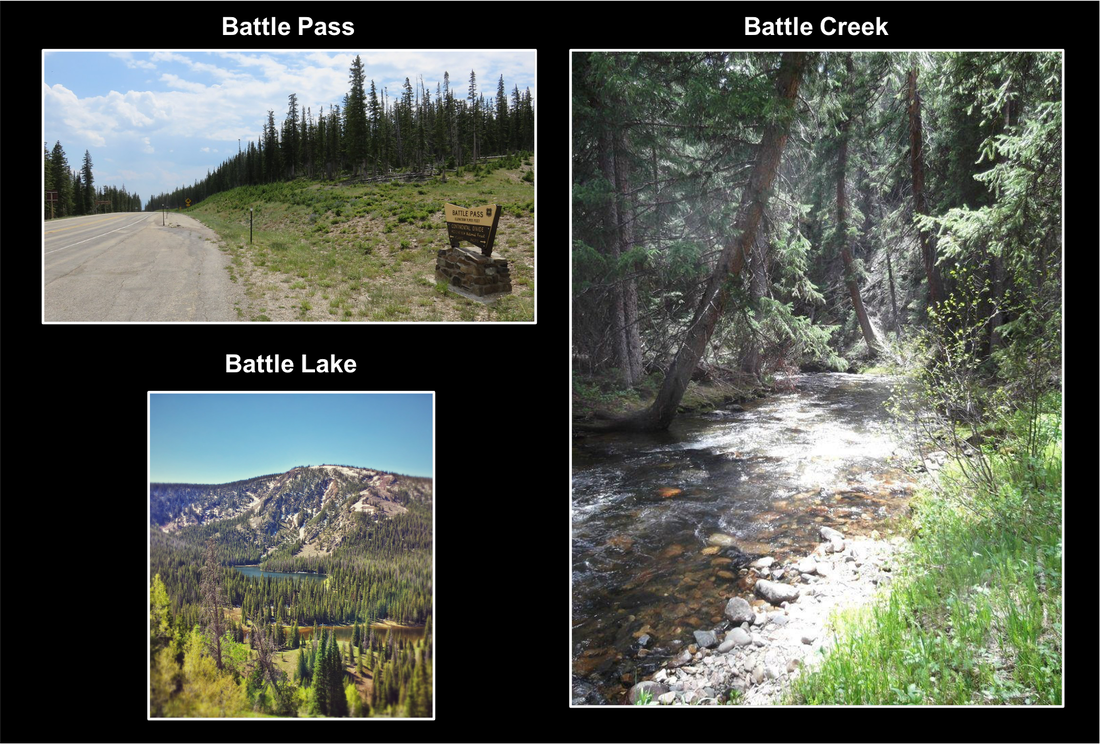 “Thomas A. Edison camped near this spot in 1878 while on a fishing trip. It was here that his attention was directed to the fiber from his bamboo fishing pole which he tested as a suitable filament for his incandescent electric light. Born February 11, 1847. Died October 18, 1951. Age 84. Placed by the Historical Landmark Commission of Wyoming 1949.”

Edison did eventually test bamboo as a filament, but only after trying about 6,000 other materials. His first success occurred, one year after the 1878 fishing trip, with carbonized cotton thread, not bamboo. 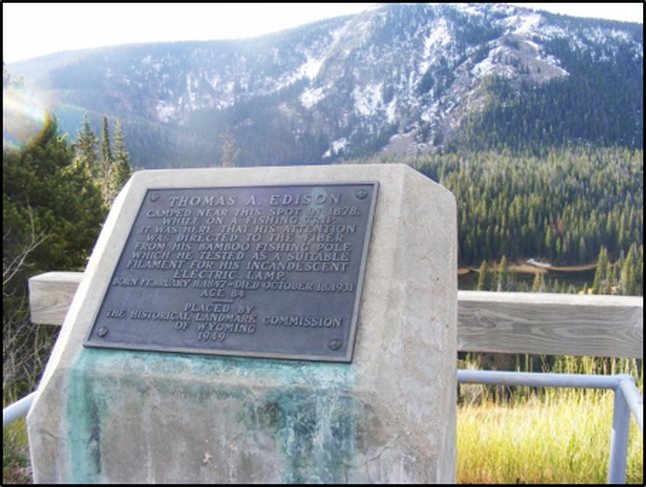 Wyoming Highway 70 travels over the basement core of the Sierra Madre Range adjacent to the Cheyenne Belt suture zone. Gold seekers on the way to California, in 1850, traveled along the nearby Southern Cherokee Trail. Copper was discovered in the Sierra Madre Range in the Doane-Rambler area in 1874. After Ed Haggarty’s discovery of a highly weathered iron-rich quartzite rock, called gossan in the Ferris-Haggarty area in 1897, prospectors, miners, and merchants flooded into new mines and towns in the area (see Encampment Geowyo site). Gossan is a highly weathered rock that is evidence of a sulfide ore deposit. 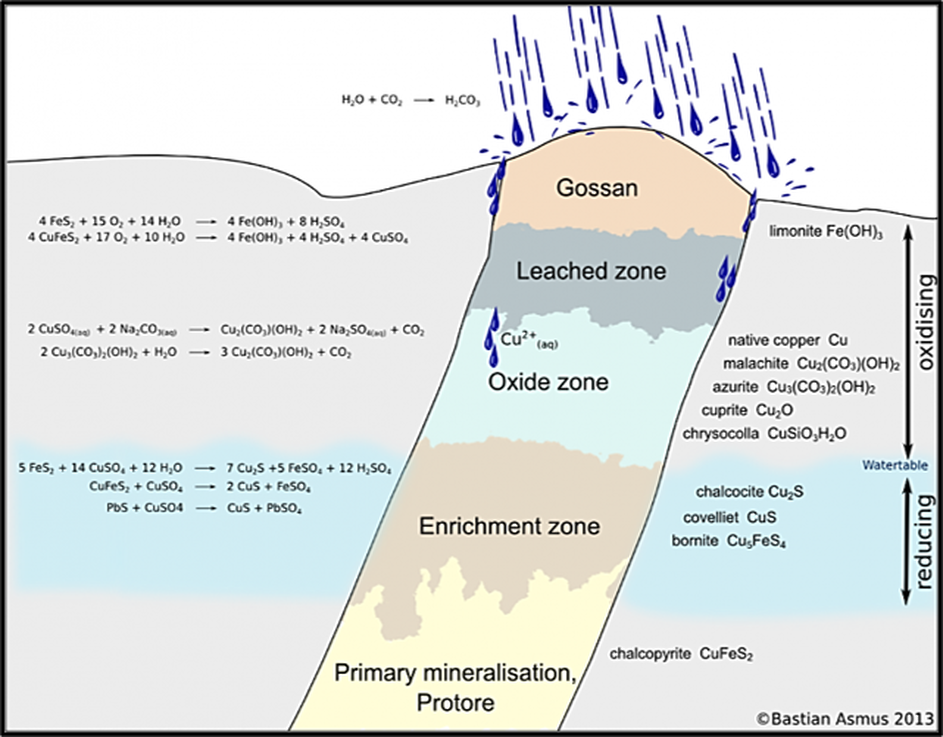 Schematic view of sulfide vein and weathered gossan at surface.
Image: Ozdemir, A, and Sahinoglu,  A., 2018, Important of Gossans in Mineral Exploration: A Case Study in Northern Turkey, Int J Earth Sci Geophys 4:019, Fig. 5, p. 6; https://www.researchgate.net/publication/327415268_Important_of_Gossans_in_Mineral_Exploration_A_Case_Study_in_Northern_Turkey/link/5b94ad784585153a530e490c/download
​The Sierra Madre Mountains are a northwest-southeast oriented basement arch elevated by the Laramide Orogeny (70-56 Ma). The Range exposes an ancient suture zone in the basement. The northeast-trending Cheyenne Belt is a zone of deformation separating the Proterozoic Colorado Province (Mojave, Green Mountain, and Yavapai blocks) from the Archean Wyoming Province.  The older granites, gneisses, and enfolded metasedimentary rocks north of the belt contrast sharply with the younger metavolcanic, metagraywacke, and deeper water rocks of the volcanic island terrane to the south. The suture zone is two to three miles wide and about 125 miles in length. The Cheyenne Belt was created by a continent-island arc tectonic plate collision that occurred between 1.8 and 1.6 billion years ago.

The Continental Dynamics of the Rockies (CD-ROM) Working Group has interpreted data across the Cheyenne Belt as a major tectonic crustal boundary in the Rockies. The record of accretion and growth of this part of the North American continent is preserved in the faults, deformation, and metamorphism observed within the basement rock. 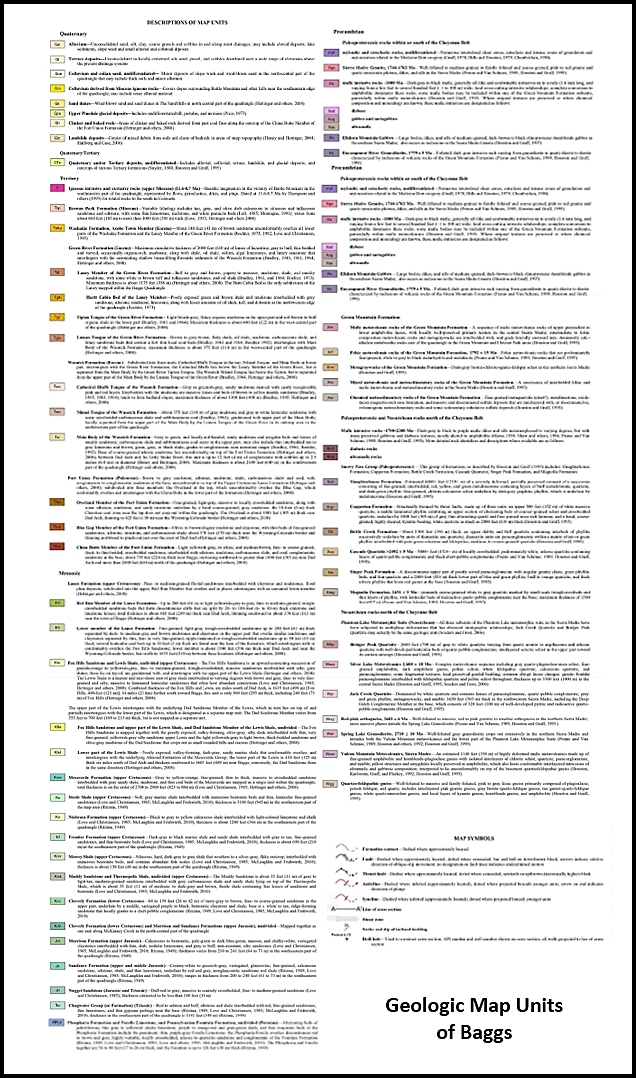 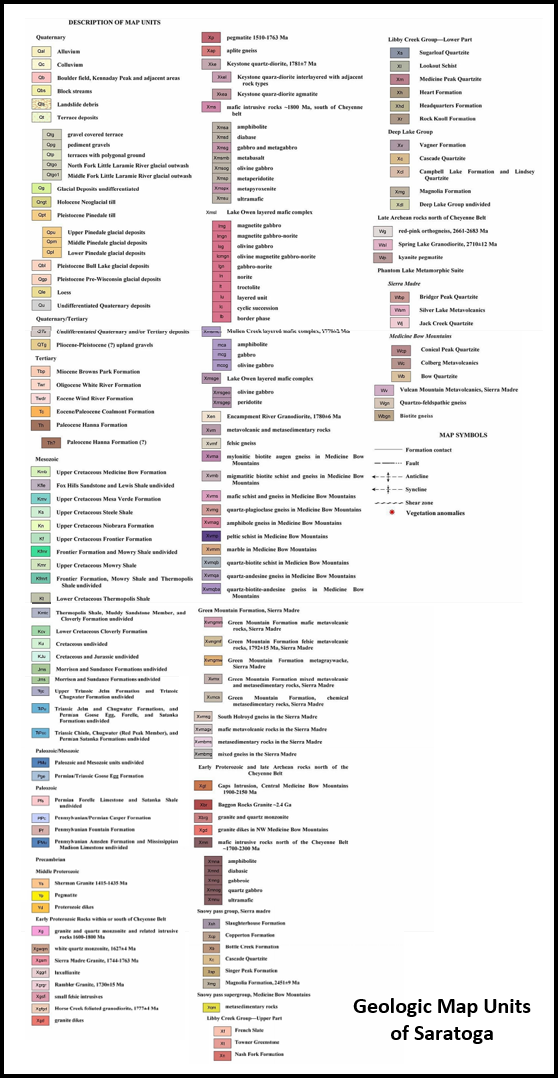 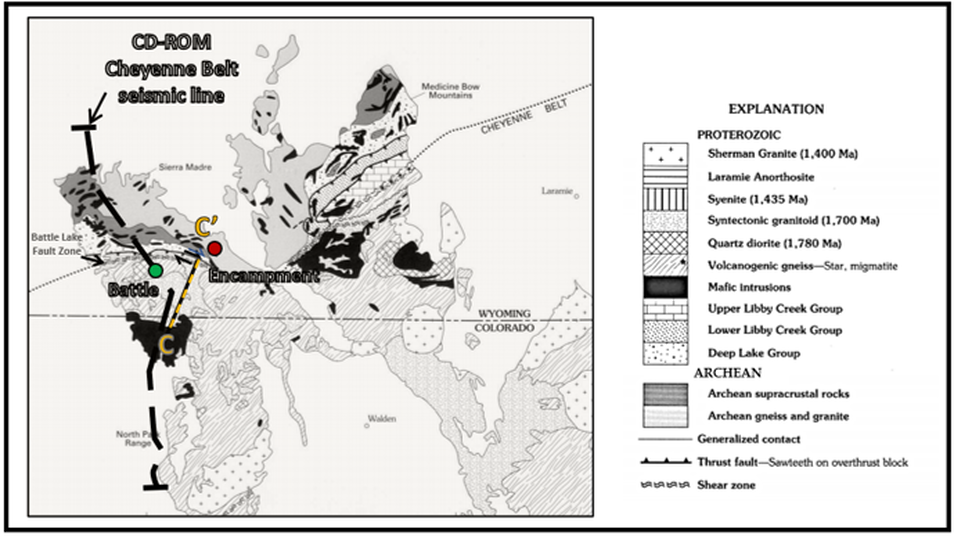 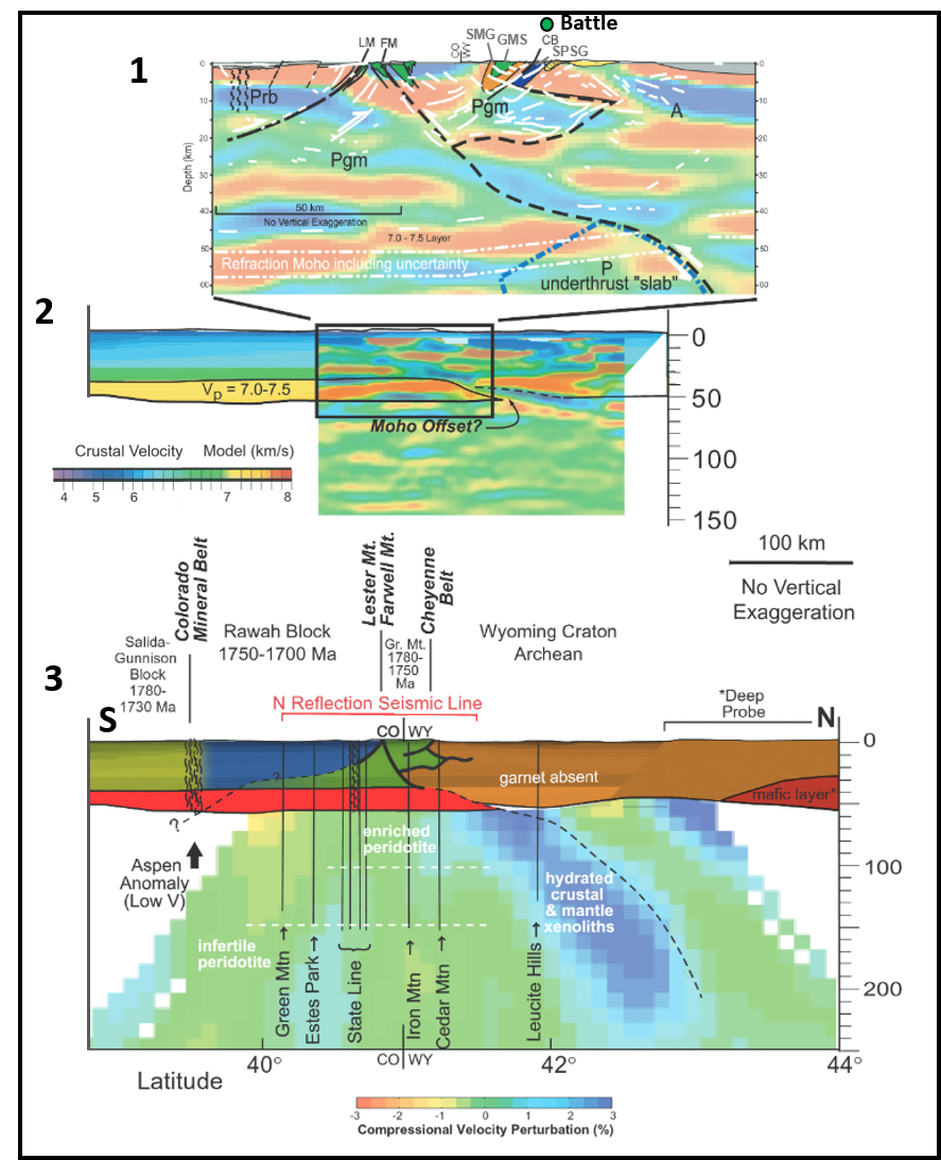 Geology Road Log of Wyoming 70 from Encampment to Baggs

Start of road log at southern end of Encampment in valley of the Encampment River.
Image: Google Earth Street View
The Ferris Haggerty Mine was the most productive copper mine in the district. The mine was opened as the Rudefeha mine in 1897 at se/4 ne/4, Section 16, Township 14 North, Range 86 West. The mine was about 16 miles west of Encampment on the west side of the Continental Divide at an altitude of 9,888 feet. The ore was hauled 60 miles by wagon to the nearest Union Pacific rail junction then shipped to a smelter in Chicago. The ore is hosted by the Magnolia Quartzite Member of the lower part of the Deep Lake Formation. A 20 foot copper vein lies in a brecciated quartzite that is in contact with a hanging wall schist. The ore  bed dips 30 to 60 degrees south and is 250 to 300 feet long. The mine closed in 1908 but the ore was not played out. The Ferris-Haggerty Mining Corporation of Colorado purchased the abandoned mine in 2015 with plans to renew operations. The company estimated the mine contains up to 95 percent of the original copper in place (928,500 tons) with 116,000 ounces of gold in reserve. 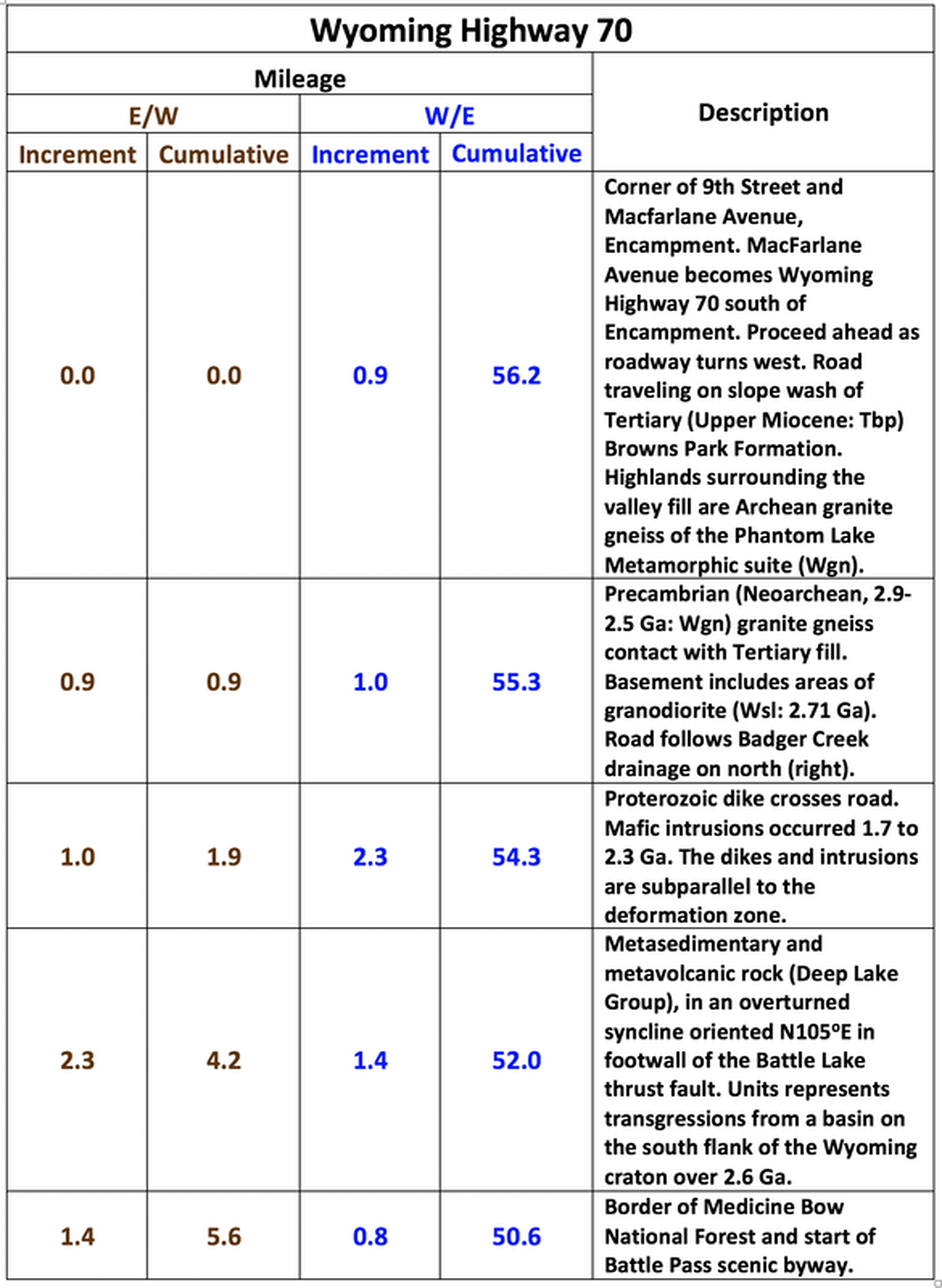 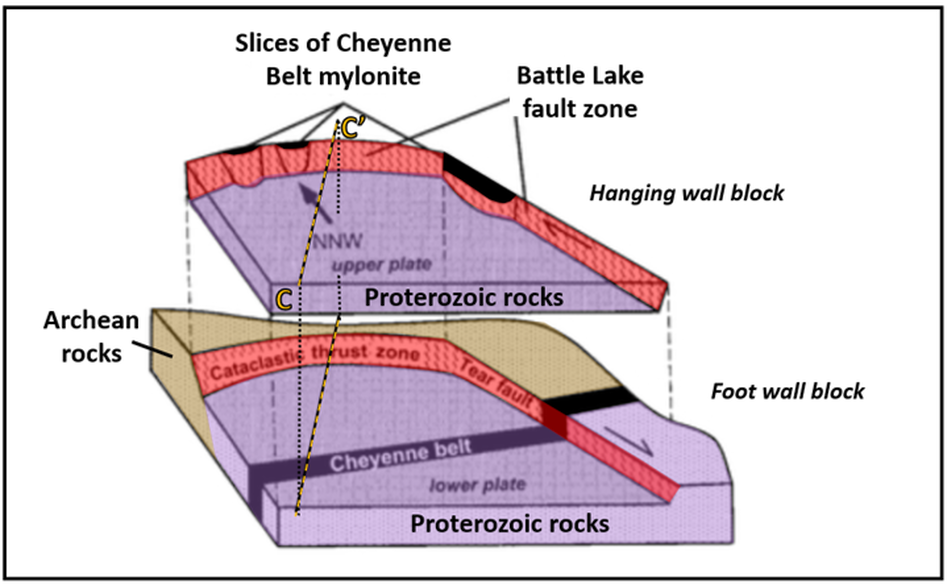 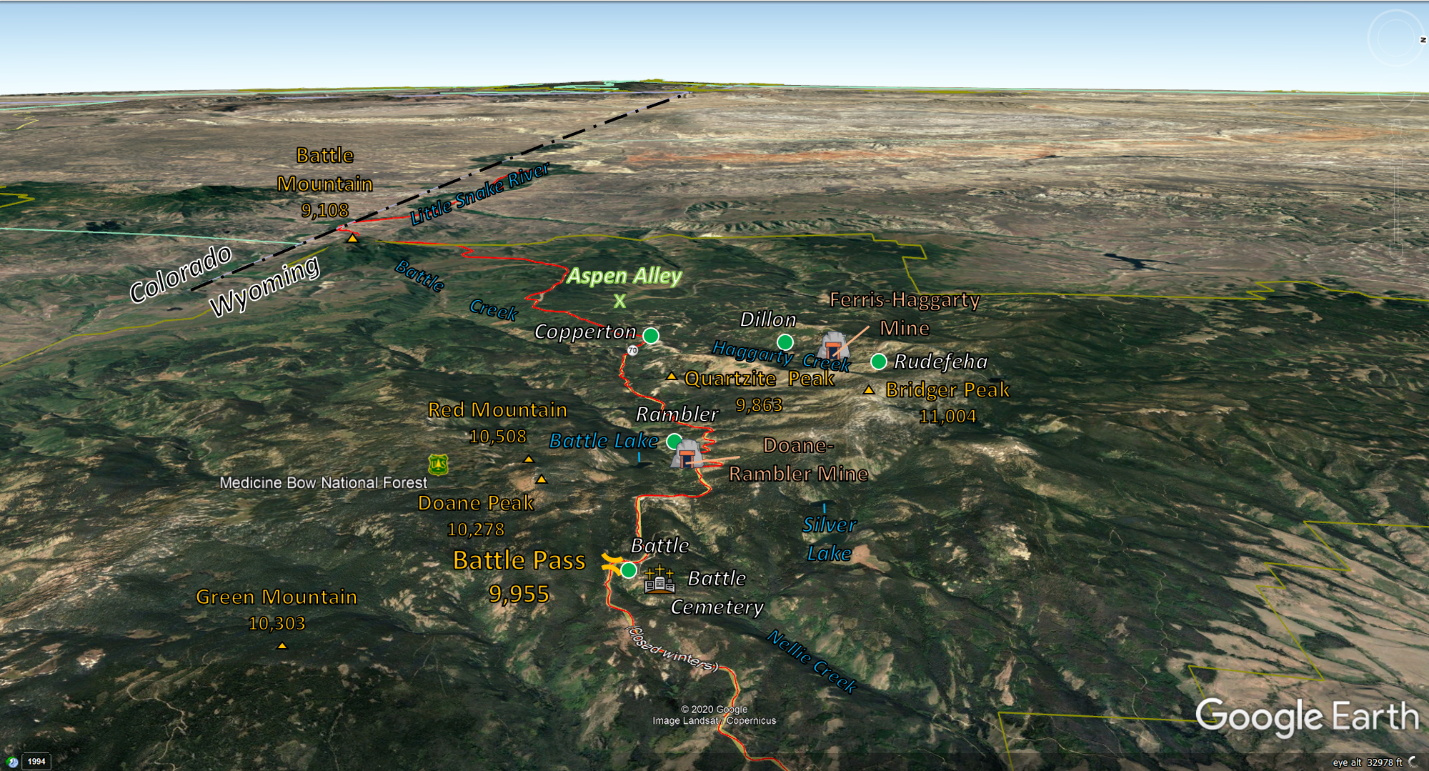 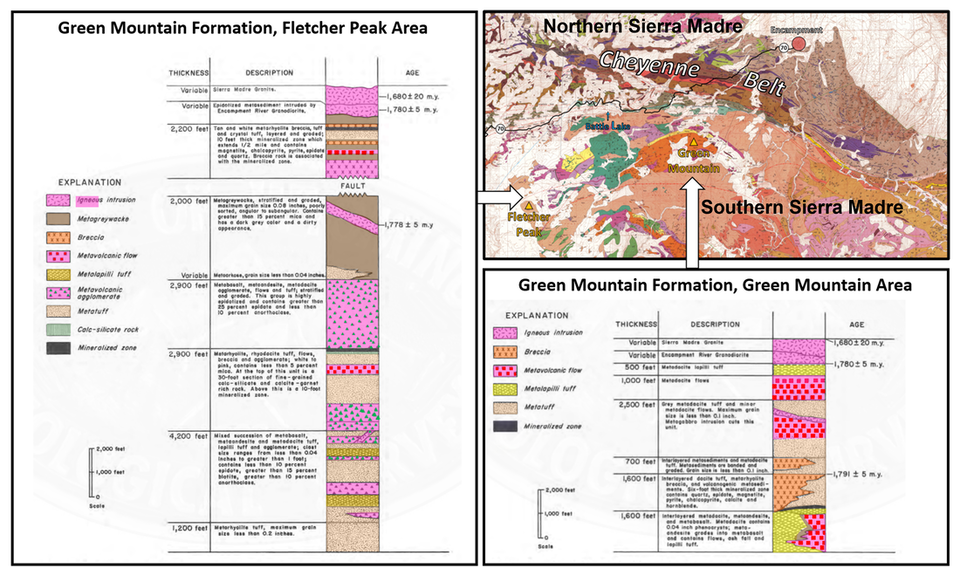 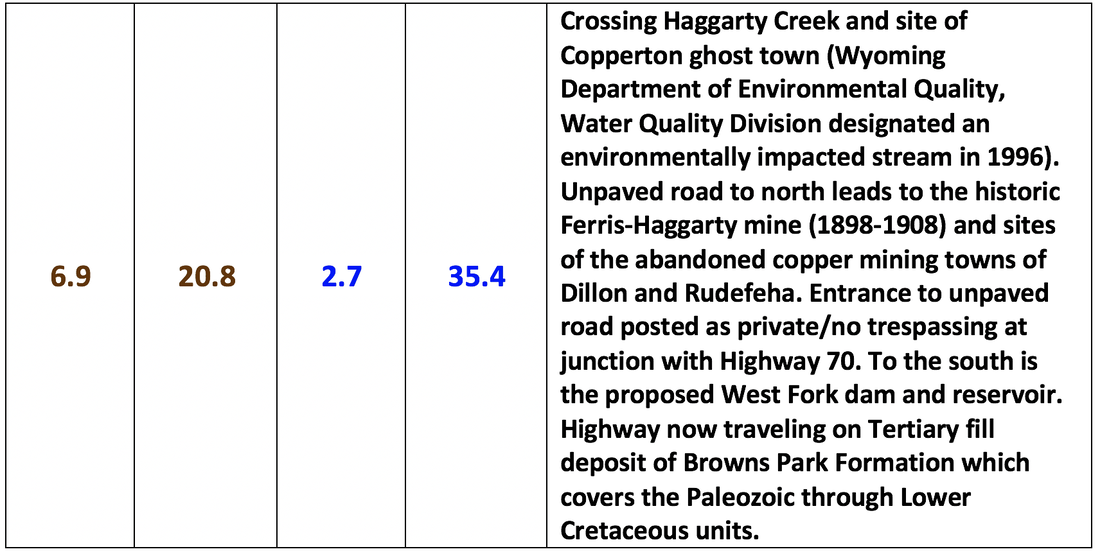 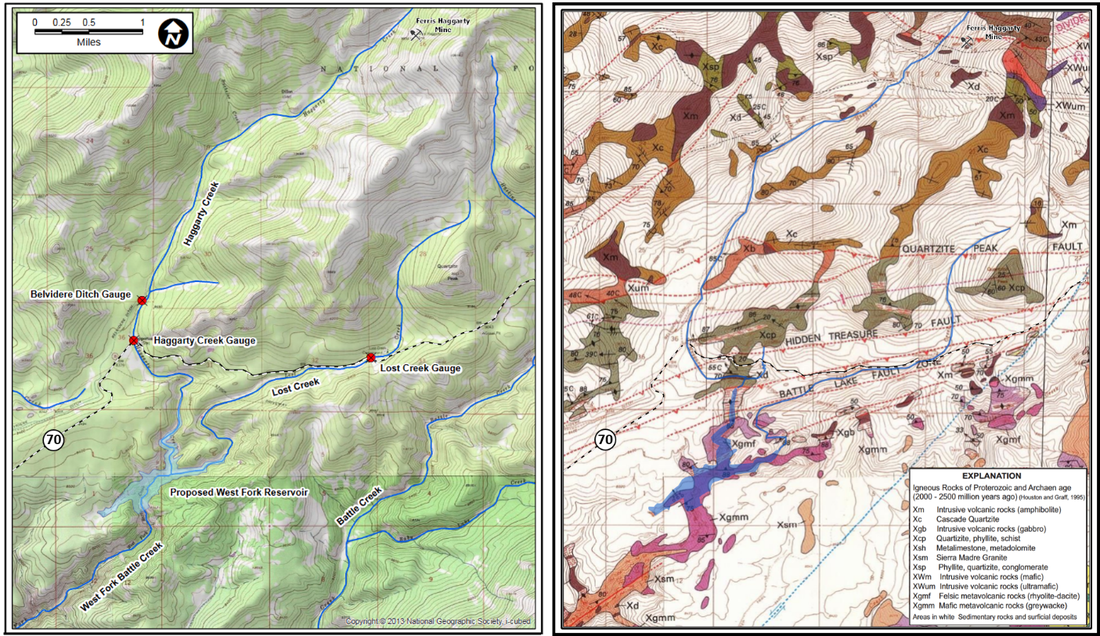 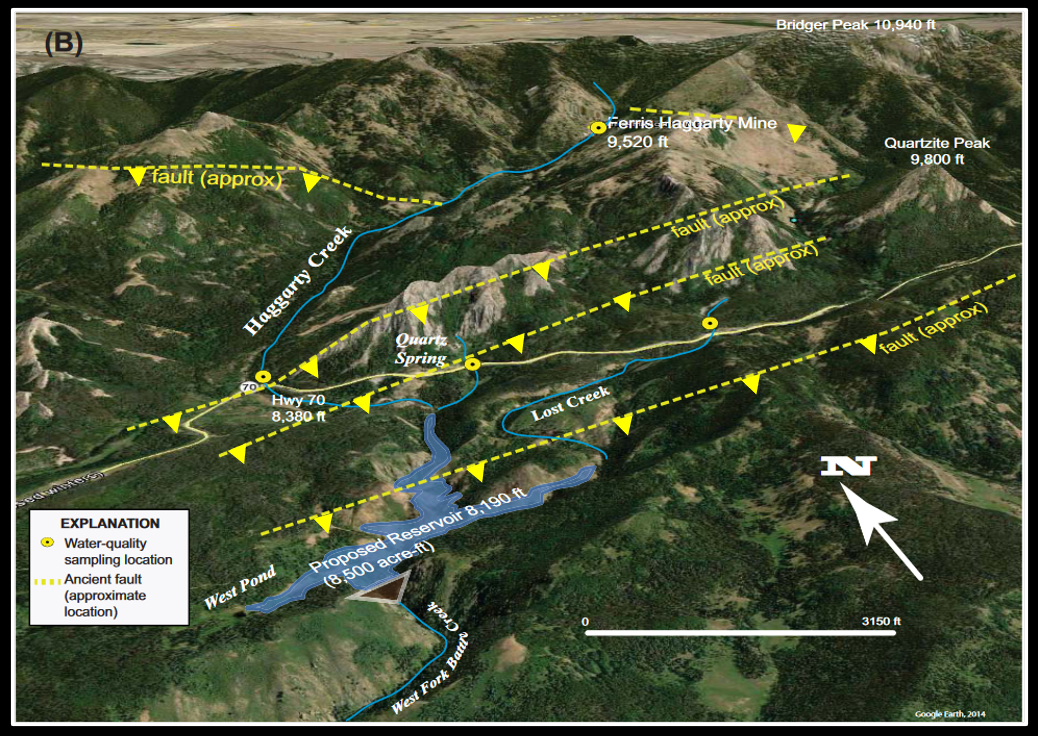 Runoff from the Ferris Haggarty mine waste is the primary source of metal contamination. Copper ore was mined from a Late Archean quartzite in contact with a schist in the hanging wall of a thrust fault. The major ore types were chalcopyrite and chalcocite, with other copper minerals. 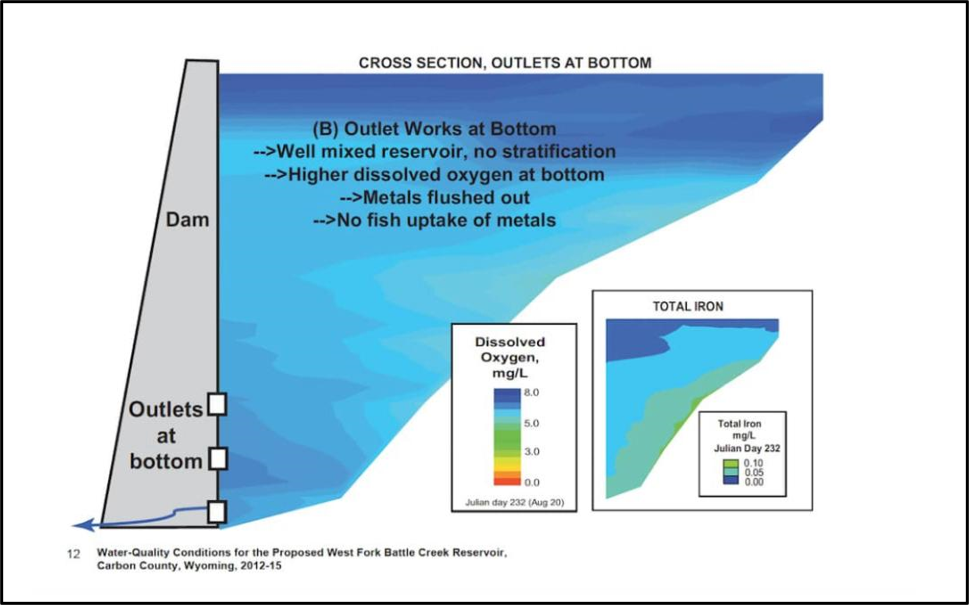 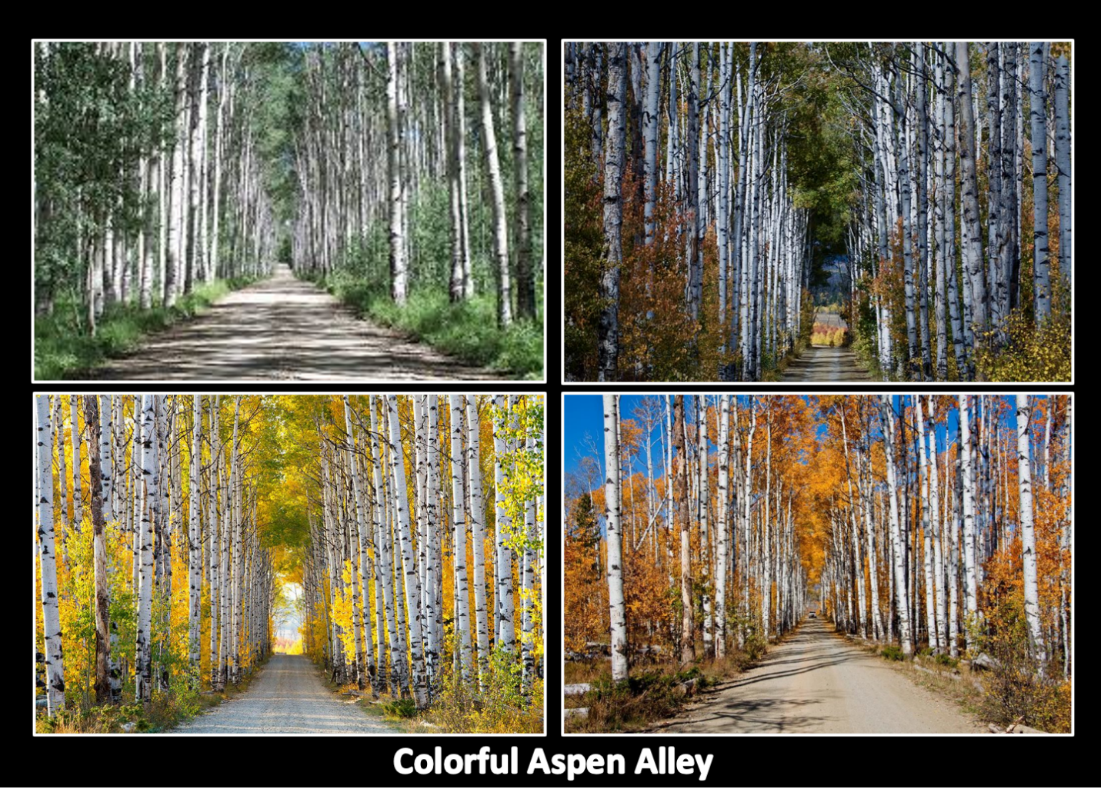 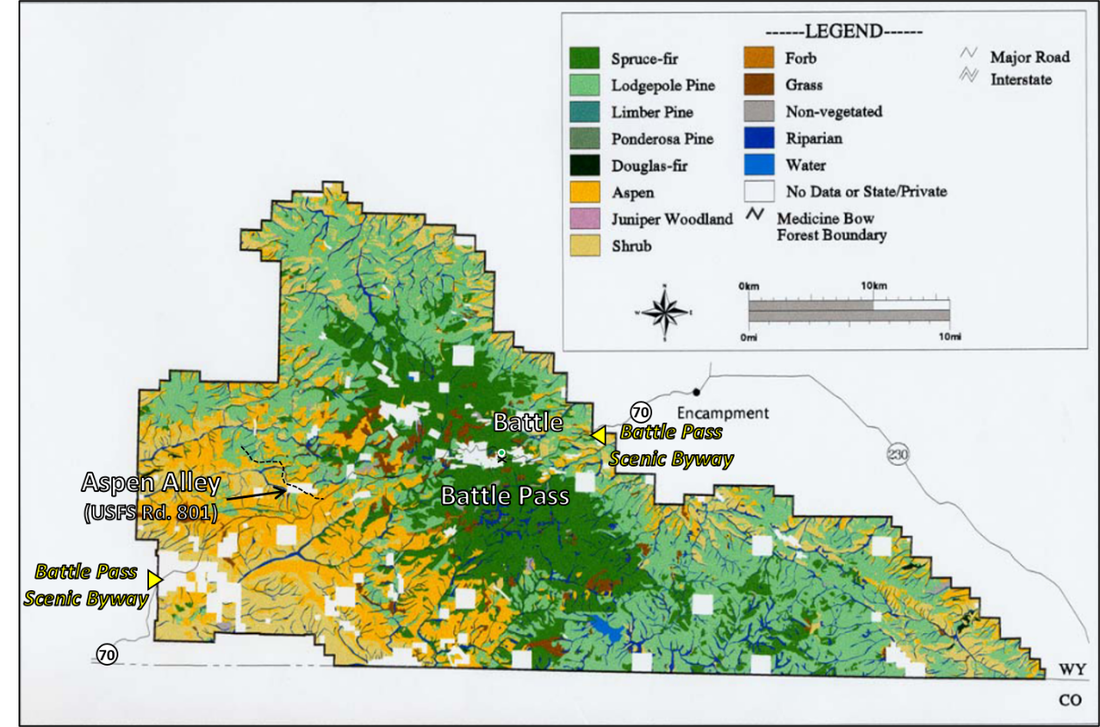 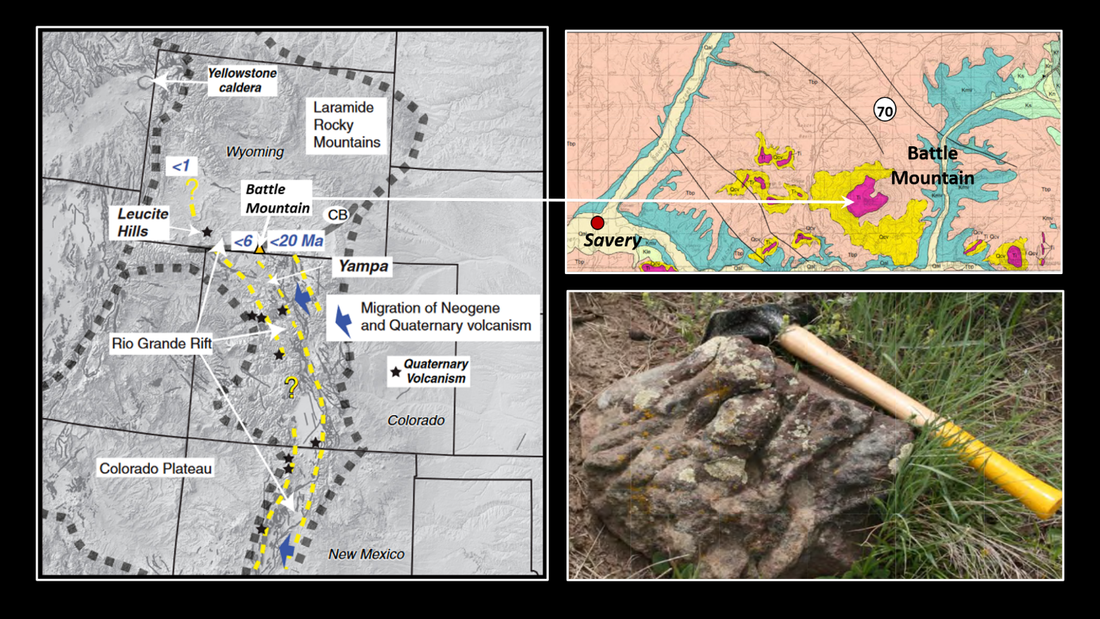 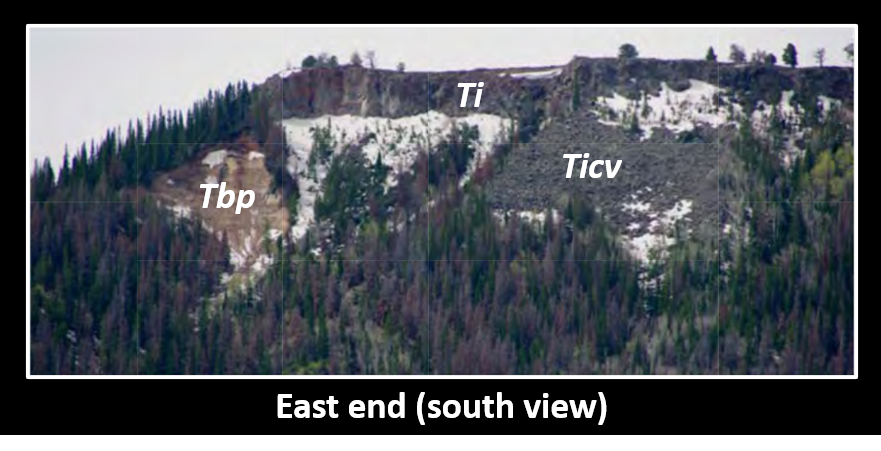 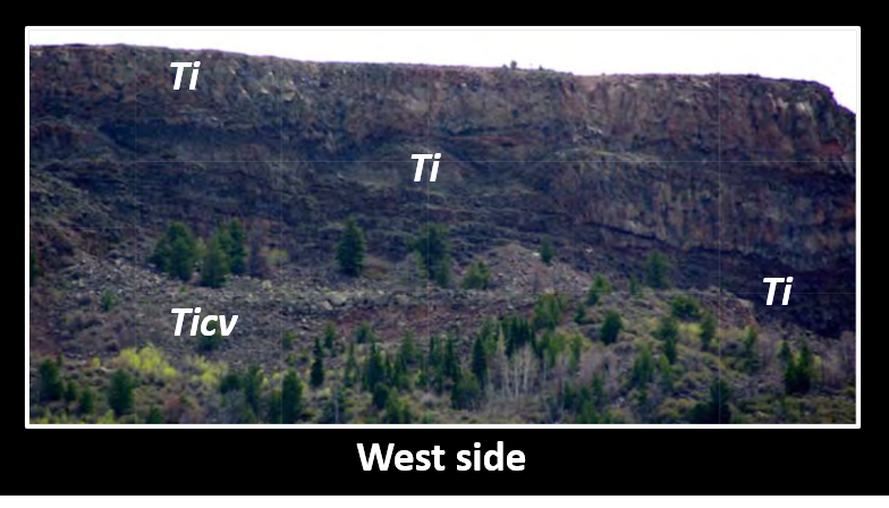 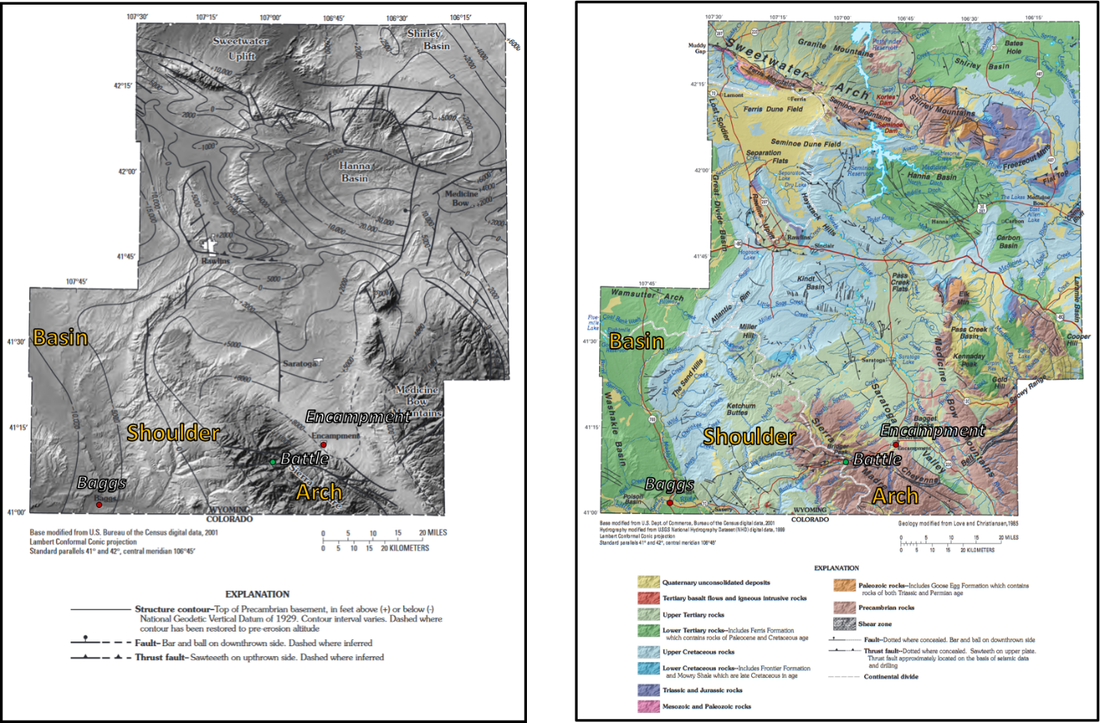 Wyoming towns within the Little Snake River Valley on Wyoming Highway 70. Left: The town of Savery, Wyoming. The complex in the background is the Little Snake River Museum, located on Carbon County Road 561. Middle:
Stockgrowers Bank, located on North 3rd Street in Dixon, Wyoming. The property, now the Dixon Town Hall, is listed on the National Register of Historic Places. Right: The First State Bank of Baggs, located at 10 South Miles Street in Baggs, Wyoming. The property is listed on the National Register of Historic Places. This area was known as outlaw territory due to the isolation of the valley. Butch Cassidy and the Wild Bunch gang hung out in the area. The Gaddis Matthews House in the center of Baggs was a former “hide-out.”
Image: Beall, J., 2014, Wikipedia;
Left: https://upload.wikimedia.org/wikipedia/commons/6/67/Savery%2C_Wyoming.JPG;
Middle: https://en.wikipedia.org/wiki/Dixon,_Wyoming#/media/File:Stockgrowers_Bank.JPG;
Right: https://commons.wikimedia.org/wiki/File:First_State_Bank_of_Baggs.JPG. 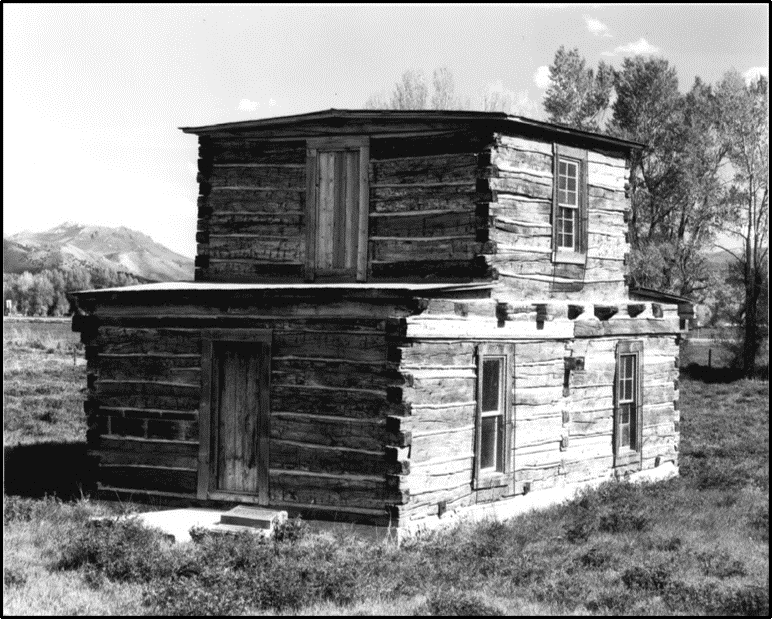 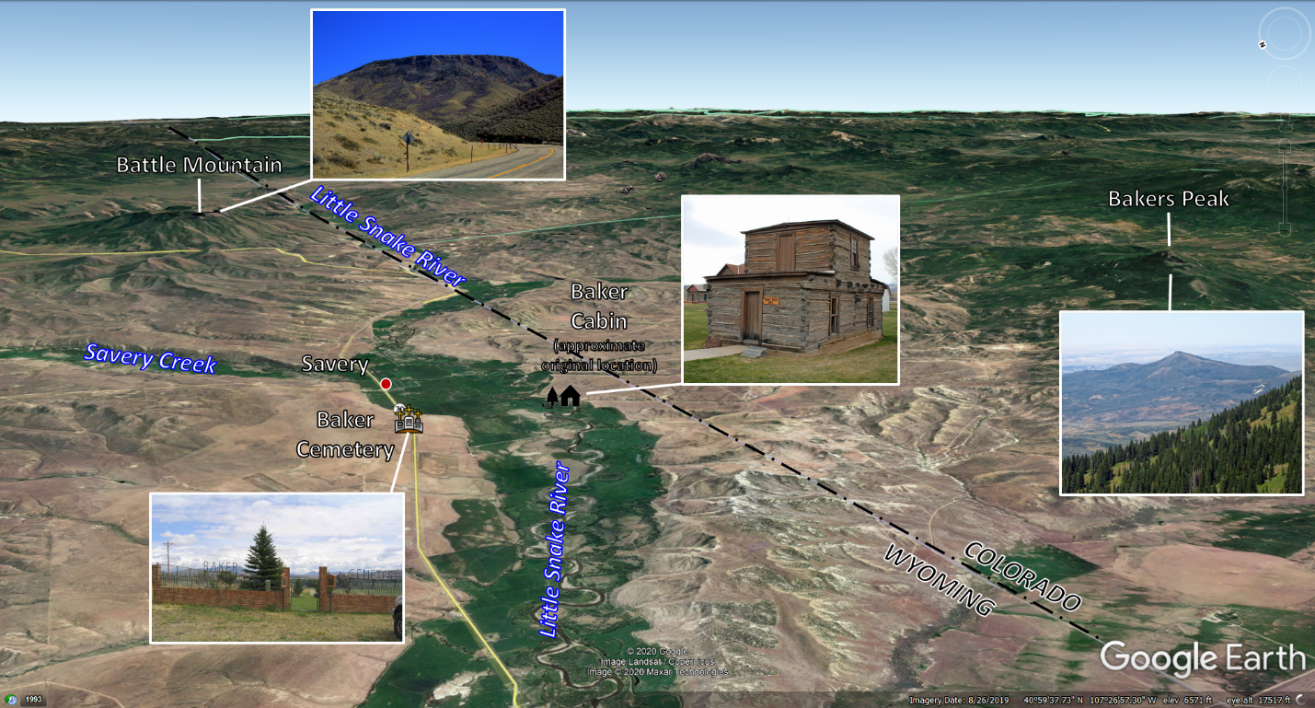 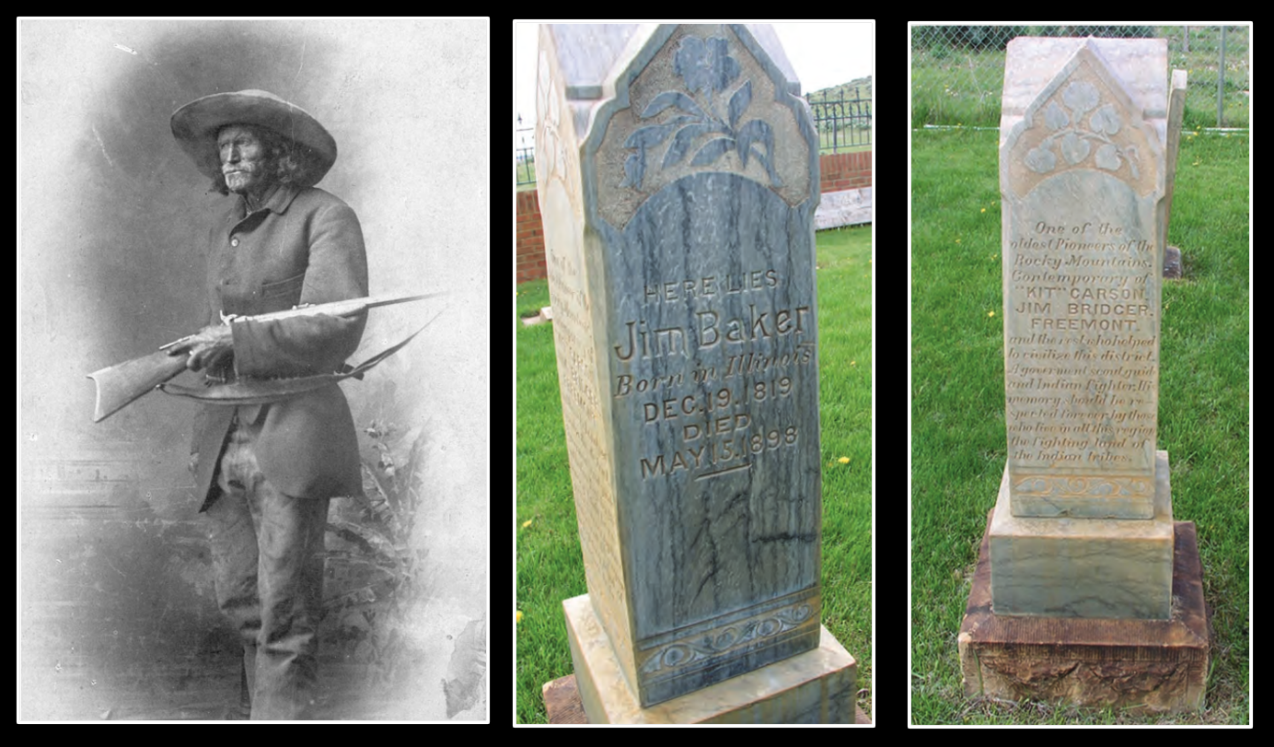 “The men who comprised the vanguard of western civilization on this continent were of a distinctly peculiar type. They were resourceful and fearless, men who could adapt themselves to rough surroundings, men who could exist in the midst of savagery. The West was not subdued by soft fingered gentry. Winning the West required rough men who were not over scrupulous and who fought the devil with fire. Of such was Jim Baker. Though possessed of a rough exterior and careless habits, he was brave, unselfish, and true to his friends. He was always faithful to duty and his honesty was irreproachable.”
(Bradley, G.D., 1912, Jim Baker: Famous Mountain Man, Scout, Hunter, Guide, and Fighter, Kindle Version, Location 28-32)