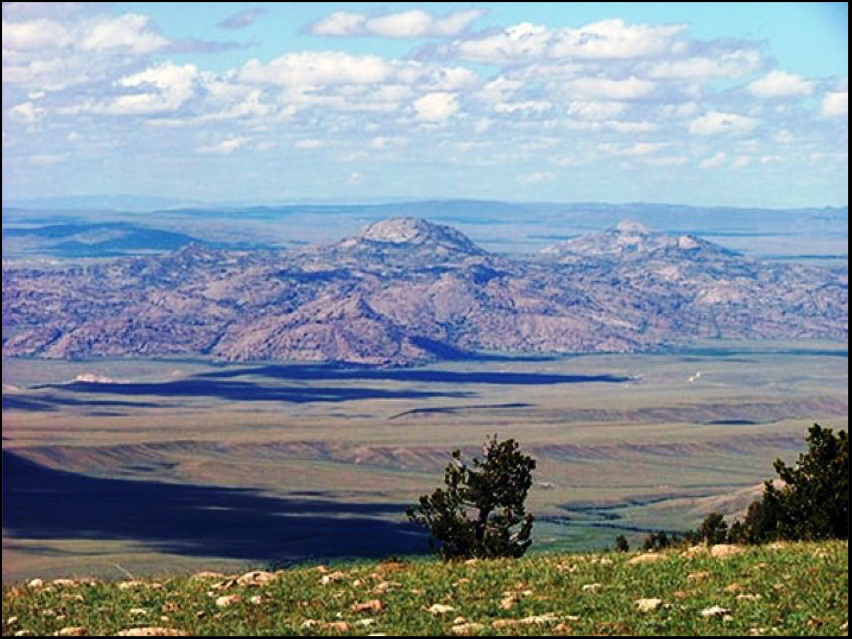 Geology of The Granite Mountains

The Granite Mountains (GM) are located about 50 miles (80.5 km) southwest of Casper. Today it is a one-hour drive along Highway 220 to reach Independence Rock, the first Granite Mountains outcrop encountered heading southwest. This granite knob is an iconic landmark along the Emigrant Trail and was named during a fur traders’ Fourth of July celebration held in 1830. One hundred seventy-five years ago, it took three days or more of hard travel to reach the “Register of the Desert” (DeSmet, 1840). John C. Fremont’s journal entry for August 1, 1843 states:
​
"Everywhere within six or eight feet of the ground, where the surface is sufficiently smooth, and in some places sixty or eighty feet above, the rock is inscribed with the names of travelers.” 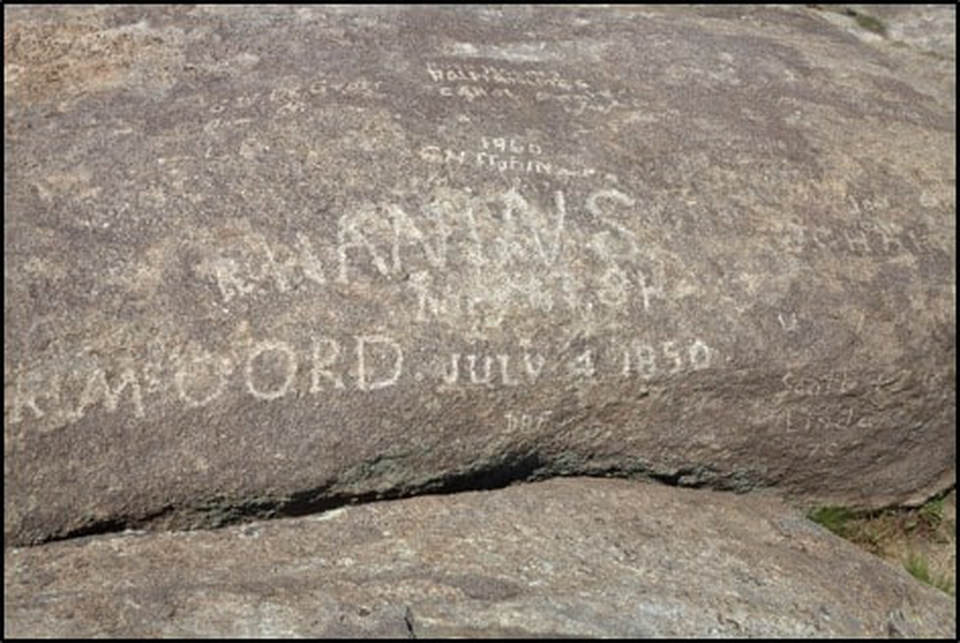 Inscriptions at Independence Rock.
Image: https://upload.wikimedia.org/wikipedia/commons/4/40/Independence_rock_names_1.jpg
The pioneers endured a difficult route getting to the landmark. The trail was marked by high desert climate, with over 1,000 feet of elevation climb, and scarce fresh water sources for themselves or their livestock. A particularly difficult trail segment was between Willow Springs (the first fresh water since leaving the North Platte) to the top of Prospect Hill (aka Ryan’s Hill). The emigrants climbed 400 feet elevation in about one mile. Native Americans saw the continuous stream of people and wagons and called the trail through the Granite Mountains area the “Great Medicine Road of the Whites” (De Smet, 1851).
The Granite Mountains are a window into the late Paleocene past when the Rocky Mountains were buried in their own debris. Only the tops of the highest peaks were exposed above the fill. 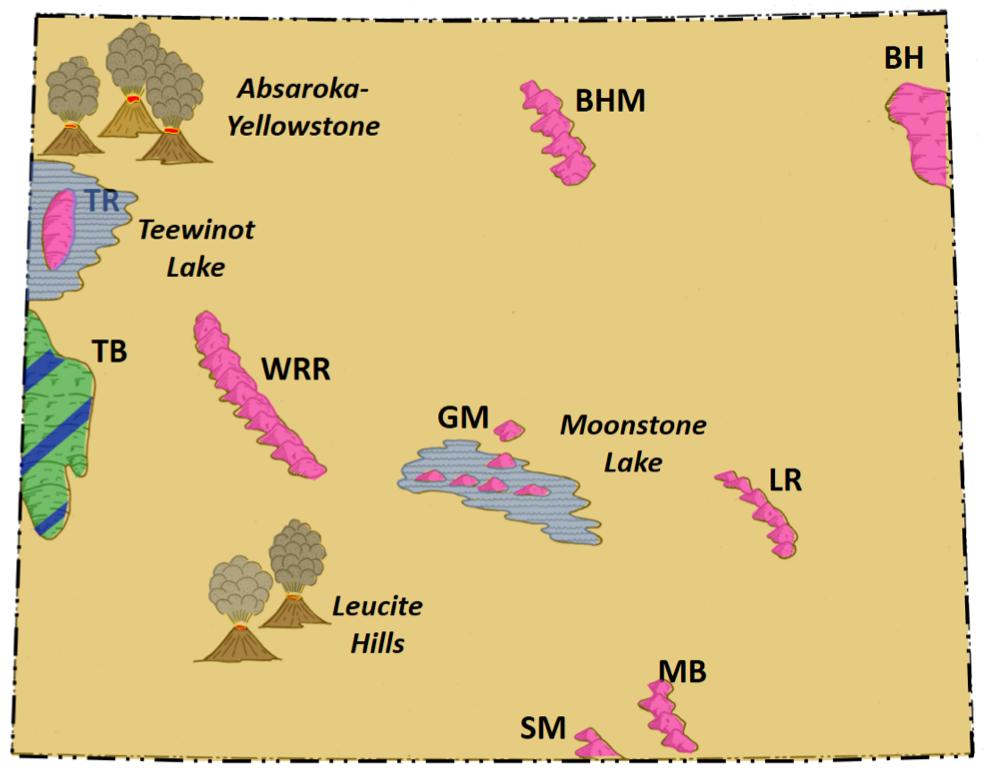 Reconstruction of Wyoming topography during late Miocene time. The mountains were almost completely buried and major volcanic centers in the Absaroka-Yellowstone area and the Leucite Hills. Miocene lakes in the Granite Mountains and the Teton Range. BH; Black Hills, BHM: Bighorn Mountains, GM: Granite Mountains, LR: Laramie Range, MB: Medicine Bow Mountains, SM: Sierra Madre, TR: Teton Rang, WRR: Wind River Range.
Image: After Houston, R.S., 1969, Aspects of the Geologic History of Wyoming Related to the Formation of Uranium Deposits: Contributions to Geology, Vol. 8, No. 2, pt. 1, Fig. 6, p. 74.
Regional uplift and exhumation of the Rocky Mountains began about 5-10 million years ago. Streams of the Missouri drainage system carried Phanerozoic sediments to the Mississippi River to eventually be deposited in the Gulf of Mexico. Oligocene and Miocene sediments are preserved onlapping onto the Granite Mountains because the collapse of the structural arch about six million years ago protected them from erosion. 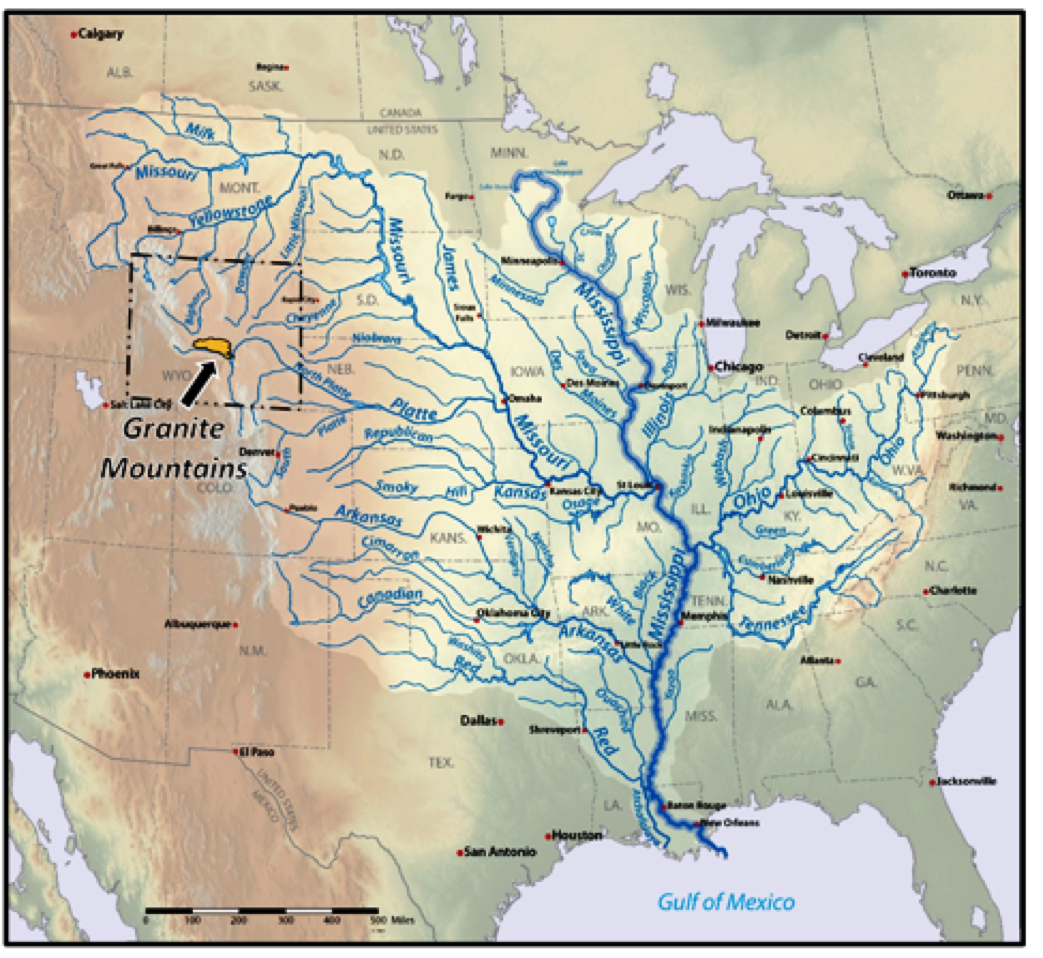 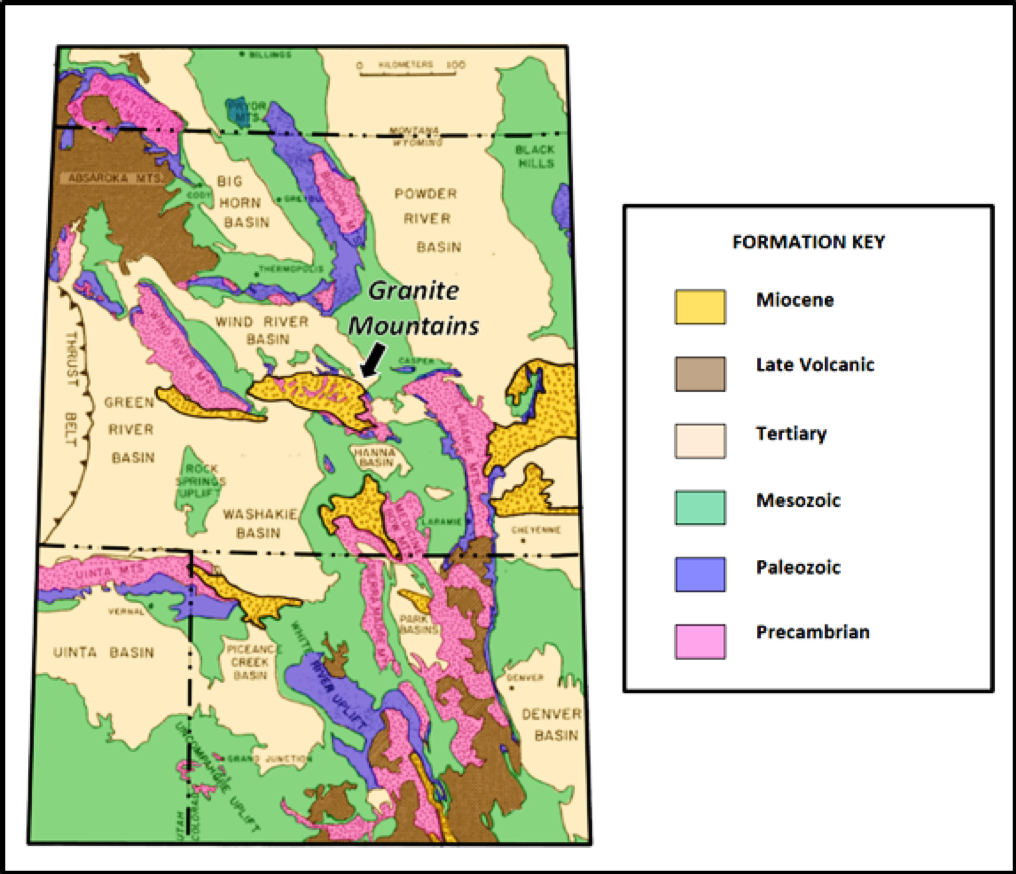 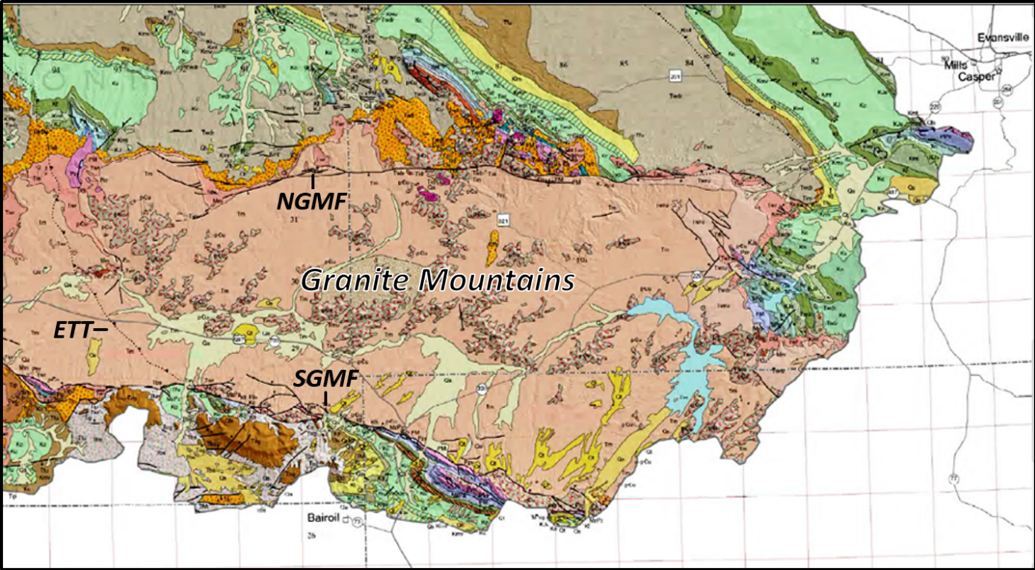 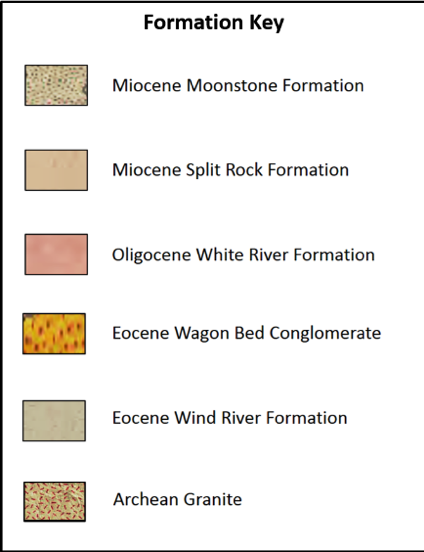 Geologic map of the Granite Mountains graben area. Tertiary fill (shown in tan to light pink color) laps onto Precambrian granite mountain peaks scattered through the center of the map. ETT: Emigrant Trail Thrust, NGMF: North Granite Mountain Fault, SGMF: Sorth Granite Mountain Fault
Image: After Lynds, R.M., 2013, Geologic storage assessment of carbon dioxide (CO2) in the Laramide basins of Wyoming: Wyoming State Geological Survey Technical Memorandum 3, Plate 7; http://sales.wsgs.wyo.gov/geologic-storage-assessment-of-carbon-dioxide-co2-in-the-laramide-basins-of-wyoming-2013/
The Granite Mountains are in the Archean-age Sweetwater subprovince of the Wyoming Craton. The subprovince has an east-west tectonic grain reflecting the Archean (> 2.5 billion years) assembly of the subprovince. The Oregon Trail structural belt marks a shear zone between the Sweetwater and Southern Accredited Terrane subprovinces. It also marks the southern limit of thick underplating of the Archean crust of the older, northern portion of the craton. The thick crust acted as a rigid buttress for the tectonic accretion of the southern portion of the craton. 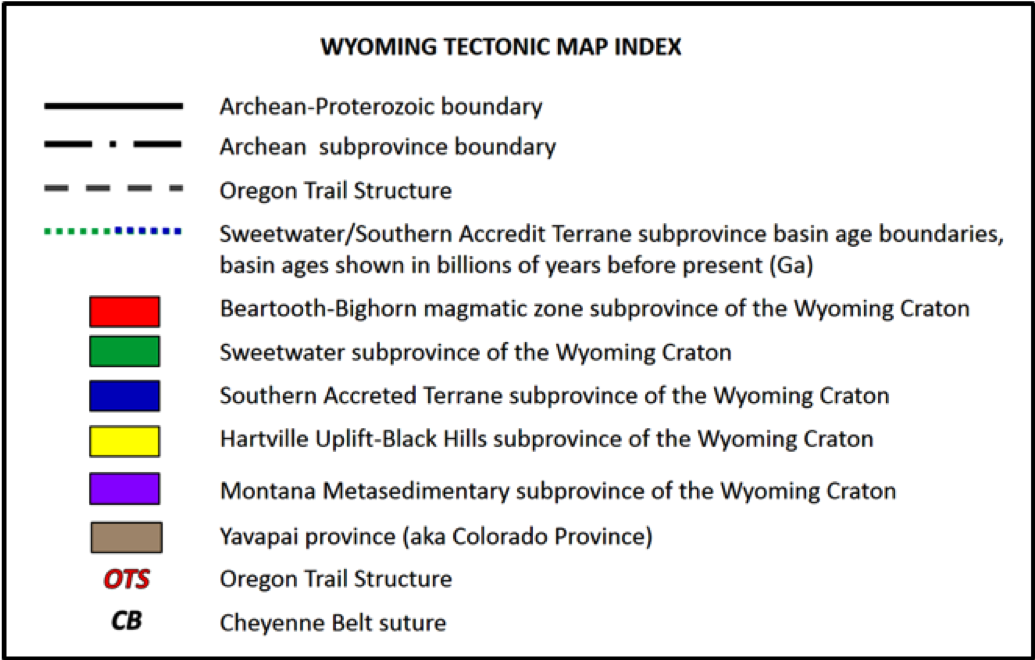 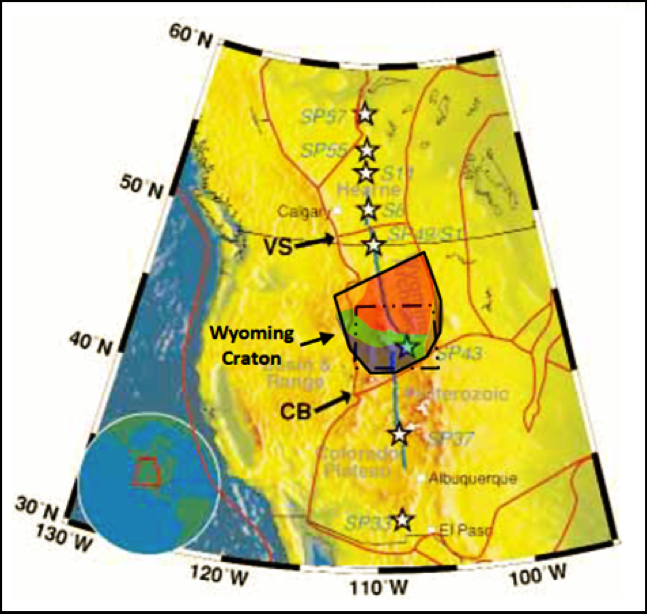 Deep Probe refraction survey Southern Alberta to New Mexico.  Wyoming Craton thick lower crustal layer continuous to the Oregon Trail Structure (OTS). The thick lower crust is also called a lithospheric mantle “keel.”
Image: After Henstock, T.J, Levander, A., Snelson, C.M., Keller, G.R., Miller, K.C., Harder, S. H., Gorman, A.R., Clowes, R.M., Burianyk, M.J.A., Humphreys, E.D., 1998, Probing the Archean and Proterozoic Lithosphere of Western North America: GSA Today, Vol.8, no. 7, Fig. 1 p. 1 and Fig. 3, p. 15-16.
ftp://rock.geosociety.org/pub/GSAToday/gt9807.pdf
The mountains are a structural arch elevated by the Emigrant Trail thrust fault during Laramide mountain building which was triggered by flat plate subduction beneath western North America. The Eocene Epoch (56-34 million years ago) was the time of maximum uplift for the Granite Mountains. The Emigrant Trail thrust movement was directed to the west and southwest, offsetting the basement as much as 24,000 feet. Movement on the South Granite Mountain fault in the late Eocene further elevated the arch. The resulting asymmetric arch was 90 miles long and 30 miles wide, with a maximum elevation of 15,000-feet. The pre-collapse mountains must have looked very much like a twin of the modern Wind River Range. 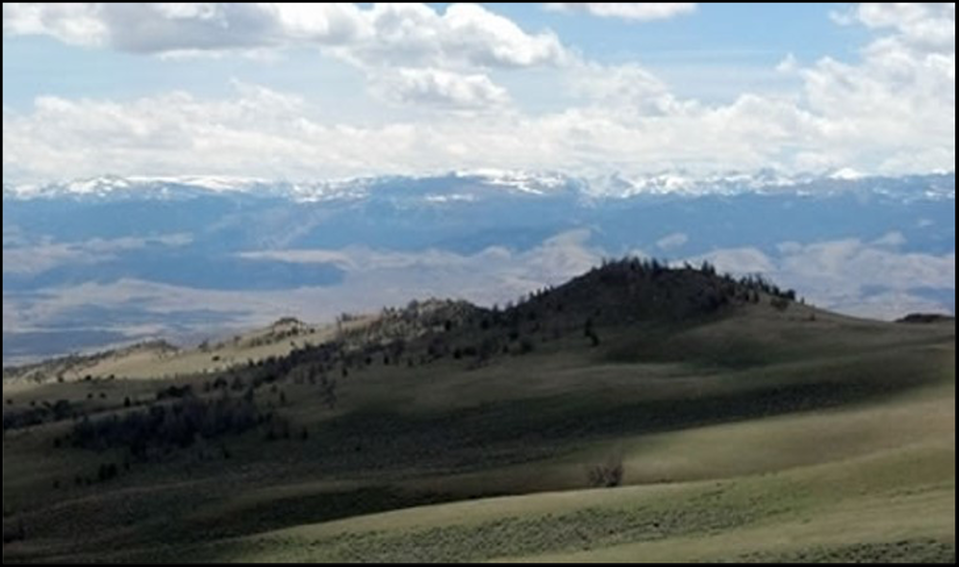 Southwest view of the Wind River Range. The range is oriented NW-SE, 100 long and 30 miles wide. The highest elevation is Gannett Peak at 13,804’.
Image: http://www.windriverhotelcasino.com/lib/images/scroller/hotelWindRivers.jpg
Six million years ago, down-to-the-south movement occurred on the North Granite Mountains fault. Maximum displacement was 800 feet. About the same time, the South Granite Mountains fault down dropped to the north with a maximum displacement of 2,000 feet. The combined motion on the faults collapsed the granite core of the mountains into a graben. The Sweetwater River was trapped in this east-west valley with a much lower base level. It was now unable to erode and carry the Tertiary sediment out of the valley. 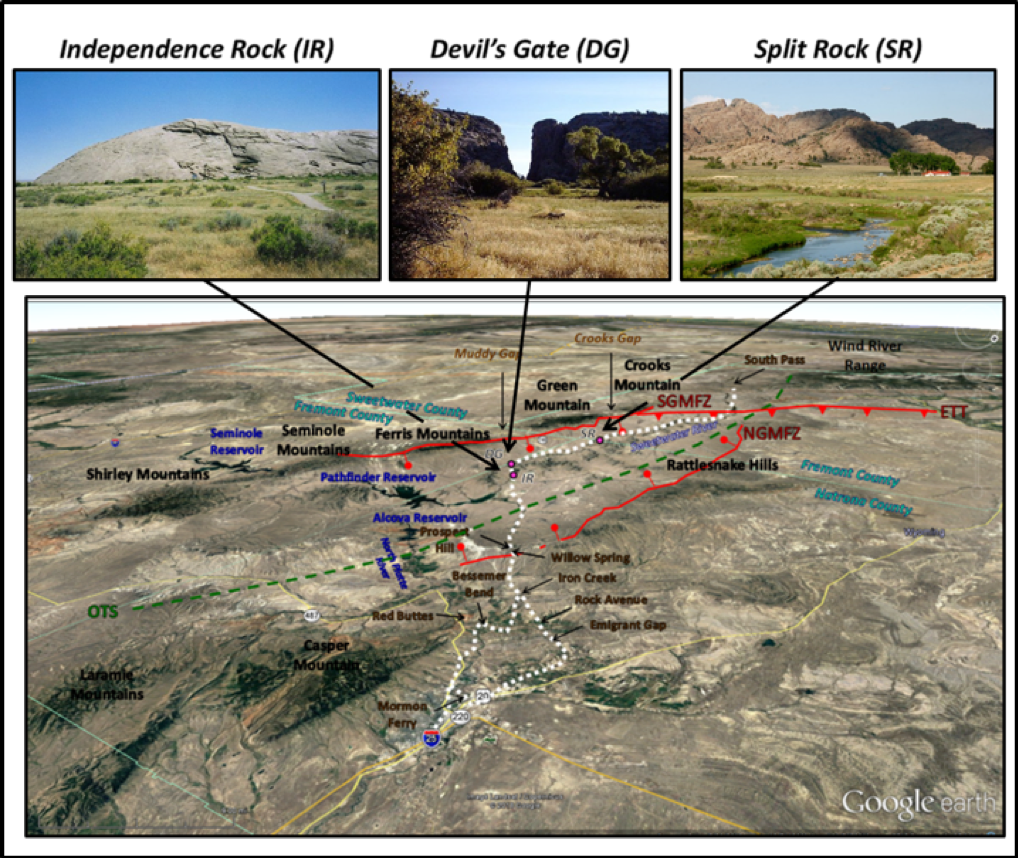 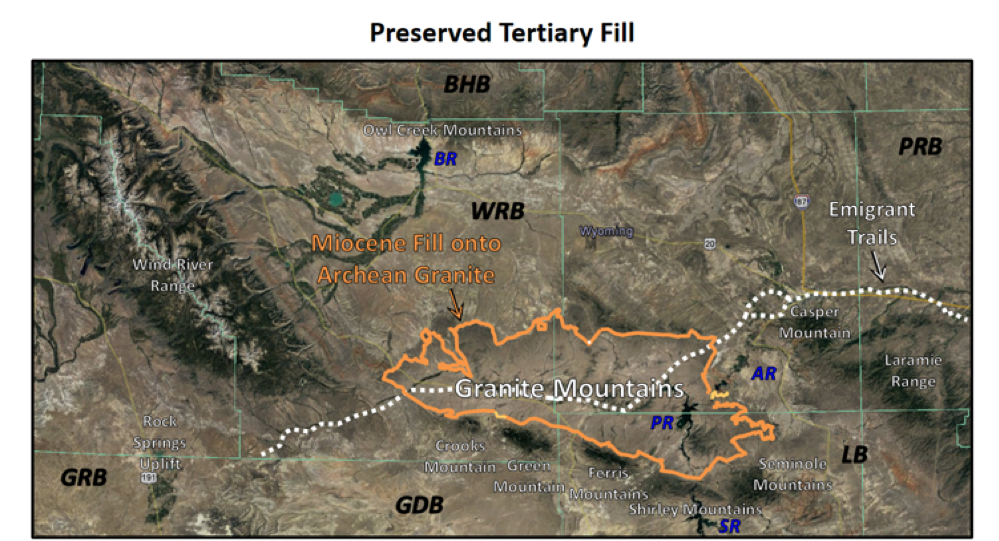 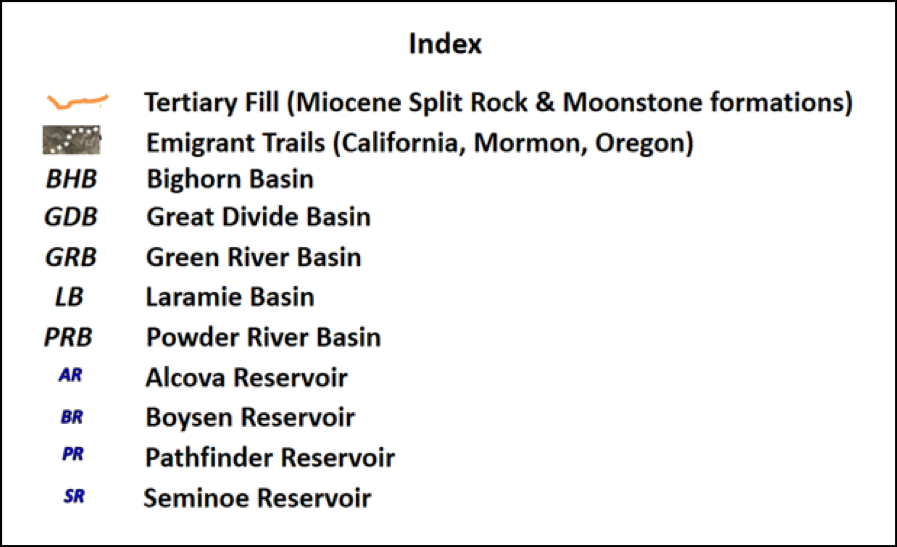