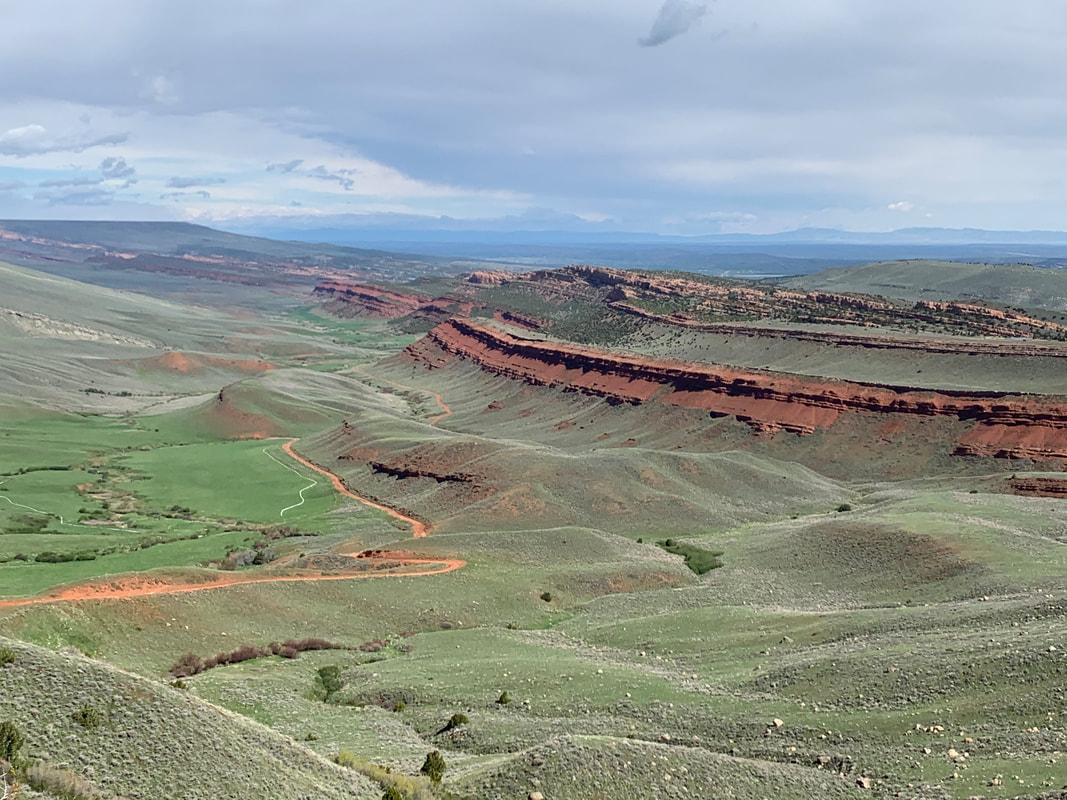 ​National Natural Landscape of cuesta landform terrane displaying differential erosion in a beautiful red and green valley.
At the northeast foot of the towering Wind River range lies a strike valley carved down through the Chugwater and into the Dinwoody Formation that is the location of one of Wyoming’s most spectacular landscapes. It is in an historic area that played an important role in the development of the Lander Valley and Red Canyon. Red Canyon is visible to motorists who travel on Wyoming Highway 28 between South Pass and Lander. The Nature Conservancy operates a working ranch in the heart of the valley and the Wyoming Game and Fish maintains a Wildlife Management Area.

Red Canyon in Spring from BLM overlook, Highway 28. View is to the northwest. Paleozoic Phosphoria Formation forms the treeless dip slope on the left. Red Canyon Creek flows northward along strike of the Dinwoody and Lower Red Peak Member of the Chugwater Group in the green valley. The east side of the canyon is called Red Canyon Rim and consists of red Chugwater sandstone with overlying salmon pink Nugget Sandstone on the top of the canyon (right side of the image). Table Mountain rises in the distance in the center of the image at the head of Red Canyon at the junction with the Middle Popo Agie River. It is a remnant stream terrace of dipping Mesozoic rocks with Eocene conglomerate top. Abbreviations: Jn, Jurassic Nugget Formation; Trc, Triassic Chugwater Group; Trd, Triassic Dinwoody Formation; Pp, Permian Phosphoria Formation.
Image: Bureau Land Management Website, Red Canyon Overlook; https://www.blm.gov/visit/red-canyon-overlook.

There is archeologic evidence that Native Americans migrated through the Lander Valley over the last 10,000 years. The Eastern Shoshone lived in western Wyoming and the Wind River area for at least the last 3,000 years and possibly as far back as 8,000 years ago. They camped in the Pinedale area and along the eastern slopes of the Wind River Mountains. Shoshone presence in Red Canyon is recorded by spear and arrow points, tepee rings and petroglyphs. 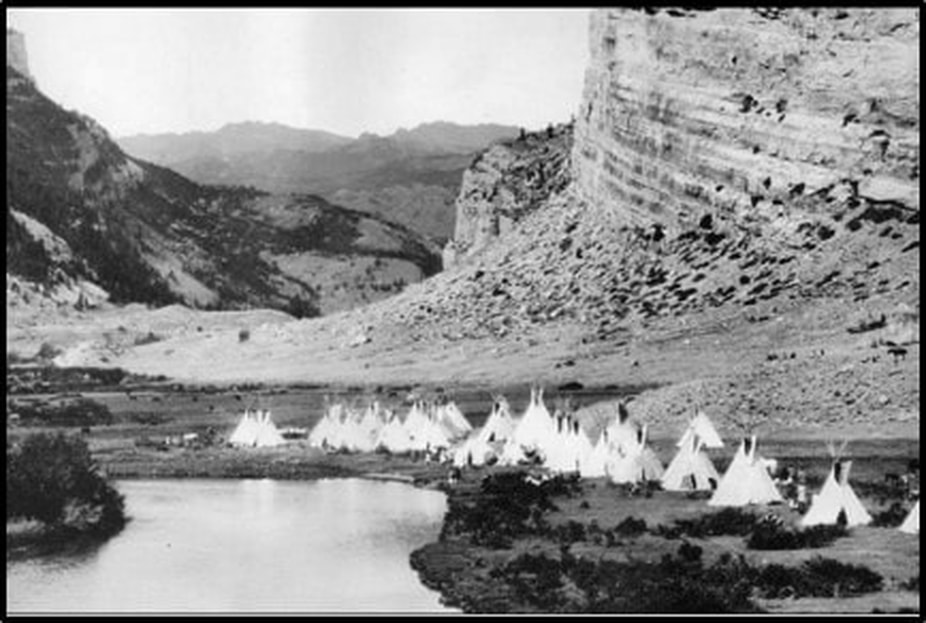 Summer encampment, Lander Valley.
Image: Theisse, C., Foutz, T, and Sproggs, J., 2010, Lander: Images of America, Location 106, Kindle Edition.
The Shoshone people were familiar with Europeans since the time of the Lewis and Clark expedition in 1805. The first mountain men entered the area in 1811. The Shoshone participated in the fur trade from 1825 to 1840. All the mountain rendezvous of that period were held within their territory. Captain Bonneville passed through the area in 1827 and reported a giant tar spring on Dallas Dome that became the site of Wyoming’s first oil discovery well, the Murphy #1 in 1884. The Murphy # 1 discovery was the beginning of the state’s modern oil business. 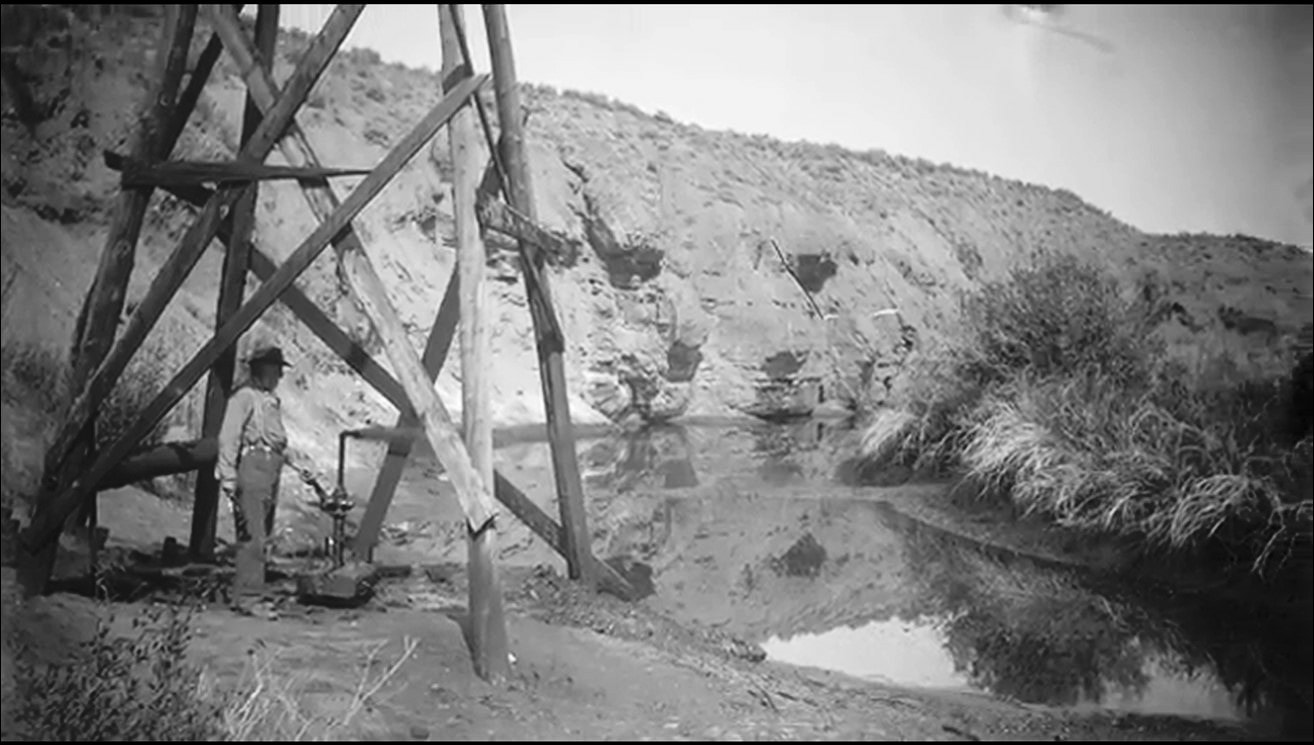 Mike Murphy at the Murphy # 1 well site, adjacent to “Giant Tar Spring” in the Little Popo Agie River. The Oil spring was first reported in Washington Irving’s  “The Adventures of Captain Bonneville, U. S. A., in the Rocky Mountains and the Far West Captain Bonneville” about five miles northwest of Red Canyon.
Image: Mohrbacher, D., 2013, EOR and IOR in Wyoming: SPE/WGA Meeting, Casper, Wyoming; http://www.co2conference.net/wp-content/uploads/2014/01/David-Mohrbachers-Residual-Oil-Zone-Interview-EOR-and-IOR-in-Wyoming.pdf.
The first migrant train of white Europeans passed through in 1836 on the way to Oregon Territory. John C. Fremont and Kit Carson made their first expedition exploring the American west through the area in 1842. The Mormon migration, of people seeking religious freedom, began in 1847, and they settled in the Salt Lake Valley (on Shoshone territory). The California gold discovery in 1849 brought another, new breed of immigrants through their land (wealth seekers). Although placer gold was found along one or more of the creeks in the South Pass area in 1842, it was not until the discovery of the Carissa Load in 1867 that a rush of miners flooded into the region. Their presence on the mountain disrupted the native’s food chain by changing wildlife migrations and contaminated their streams serving as native drinking water with waste. Arapahoe, Cheyenne and Sioux bands, who were recent interlopers to Shoshone territory, became aggressive and raided the mining communities stealing horses and mules and killing miners. It was during this period that settlement began in the Lander Valley and Red Canyon. The area quickly became the “bread basket” for the mining communities in the mountain camps of South Pass City, Atlantic City and Miners Delight. Previously their supplies had to come from Salt Lake City, about 250 miles away. 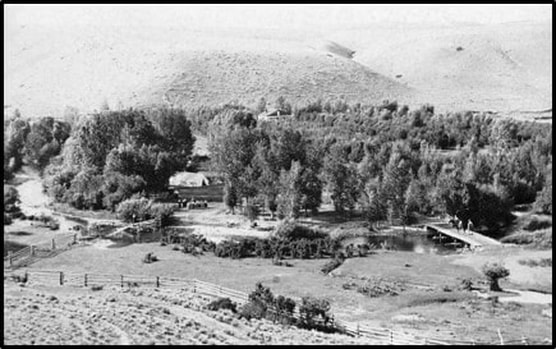 Ed Young’s orchard at the foot of Little Popo Agie Canyon and the mouth of Red Canyon, harvested fruit for the South Pass miners and residents of the Lander area.
Image: Theisse, C., Foutz, T, and Sproggs, J., 2010, Lander: Images of America, Location 350, Kindle Edition.
​The Wind River Reservation to the north was created by treaty in 1868. Camp Auger was established in 1869 as a sub-fort of Fort Bridger with the dual mission of protecting the Shoshone and the miners from the Arapahoe and their allies. The Fort became a separate outpost in 1870 and renamed Fort Brown. Lander was established on the site of Fort Brown after the fort was moved to a new location (17 miles northwest of Lander) in 1871 and renamed Fort Washakie in 1878 where it remained a military outpost until 1909. Lander, incorporated in 1890,was originally called Pushroot Valley by the miners, was eventually named after General Frederick Lander who supervised the building of the “Lander Cutoff” in 1875.

A wagon road from Lander to Atlantic City was called the “Red Grade” due to the 2,000-foot elevation climb past the colorful Mesozoic rocks of the valley. A stage coach stop was established in the valley at the Red Canyon Ranch House in 1897 on the route connecting Lander and Thermopolis. The stage service ended in 1906 when the Chicago & Northwestern Railroad reached Lander. The track terminated here and was never extended, and the town became known for, “Where Rails end and Trails Begin” 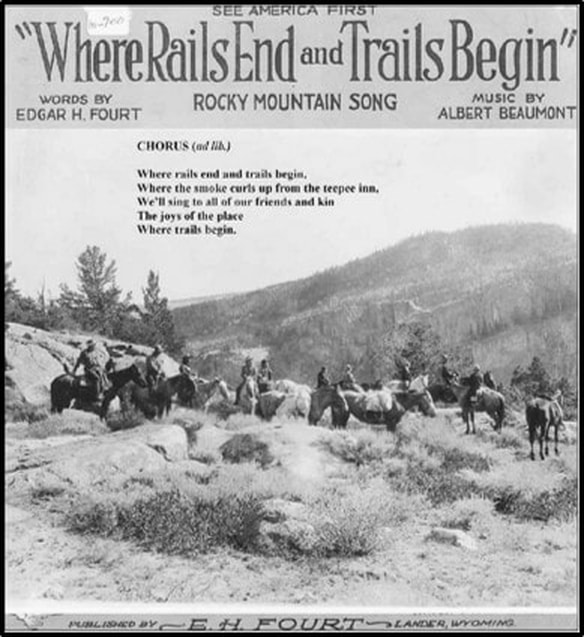 The Wind River Range was uplifted by a southward directed thrust fault during the Laramide Orogeny (70-55 million years ago). The sedimentary rocks above the basement folded and faulted in response. The northeast flank of the range dips into the Wind River Basin where streams have eroded dip canyons and strike valleys along the mountain front. Red Canyon Creek flows northwestward into the Little Popo Agie River generally separating the Paleozoic dip slope from the Mesozoic cuestas. Table Mountain is a remnant stream terrace preserved beneath Eocene gravels. Parts of Wyoming 28 is built on a similar terrace deposit. 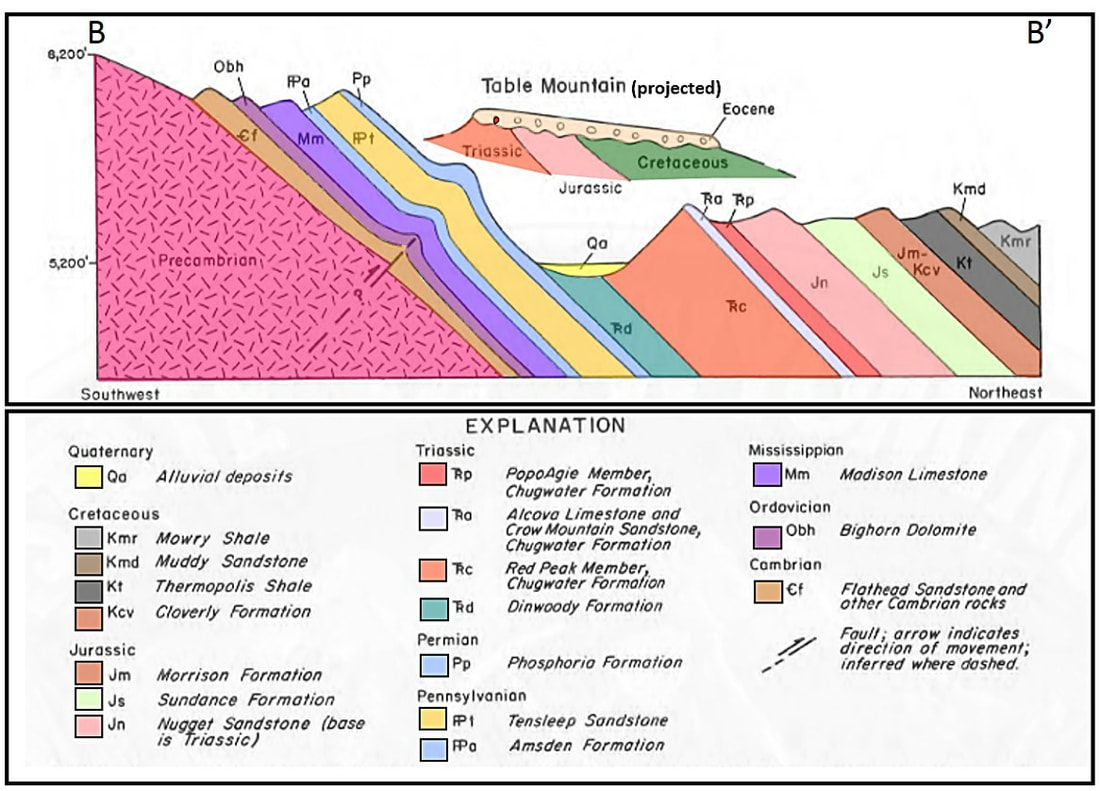 At Red Canyon, resistant Paleozoic marine carbonates and sandstones form canyons on the backlimb of the Wind River uplift. Red Canyon Creek flows along strike exploiting the soft rocks of the lower Triassic. The cuesta are the dipping linear ridges developed in the red Mesozoic rocks on the northeast side of the stream. Resistant beds form scarp ridges and nonresistant beds form slopes and swales.

Cuesta development by differential erosion of tilted sedimentary layers of varying lithification.
Image: After http://www.columbia.edu/~vjd1/structure_landforms_basic.htm.
Today, the average person sees the Red Canyon National Natural Landmark as a flash of brilliant red and green in a valley hundreds of feet below and to the northwest of Wyoming 28 (South Pass Highway) while traveling at 55 to 65 mile per hour. Some stop at the BLM turnout to gaze across the striking landscape that geology has produced. The area lies about 12 miles north of the 19th century emigrant trails, so most of those early migrators never saw it. But it is the kind of surprise vista they would pass on their road west. Very few visitors know that it was a place of summer encampment for migratory peoples for thousands of years, or that it was an agricultural area that helped feed the citizens of Lander, soldiers at western army posts, miners’ families on South Pass and other nearby communities. The ranchers, farmers and homesteaders who lived here were hardworking stewards who preserved their lands and a portion of our national heritage. Today it is a protected site to shelter wildlife and preserve the ecosystem. The Nature Conservancy purchased the 5,000-acre Red Canyon Ranch in 1993 to prevent habitat fragmentation and continue protection of the area’s unique biodiversity. The ranch leases about 30,000 acres of state and federal grazing land. The property operates as a working ranch that is open to the public. The open area near the BLM Overlook is the Wyoming Fish and Game Wildlife Management Area. These 1,785 acres were purchased in 1958 for elk winter habitat. Other wildlife including mule deer, pronghorn antelope, moose, ruffed grouse, blue grouse, song birds and small mammalsmake use of the land also. As many as 650 elk have been counted using the habitat during the winter closure period (December 1 – April 30). This is a place that deserves a contemplative visit. 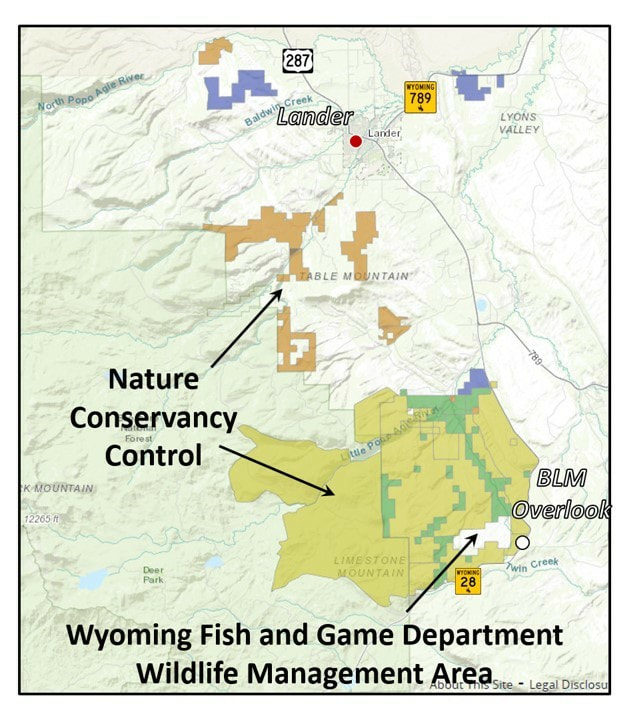 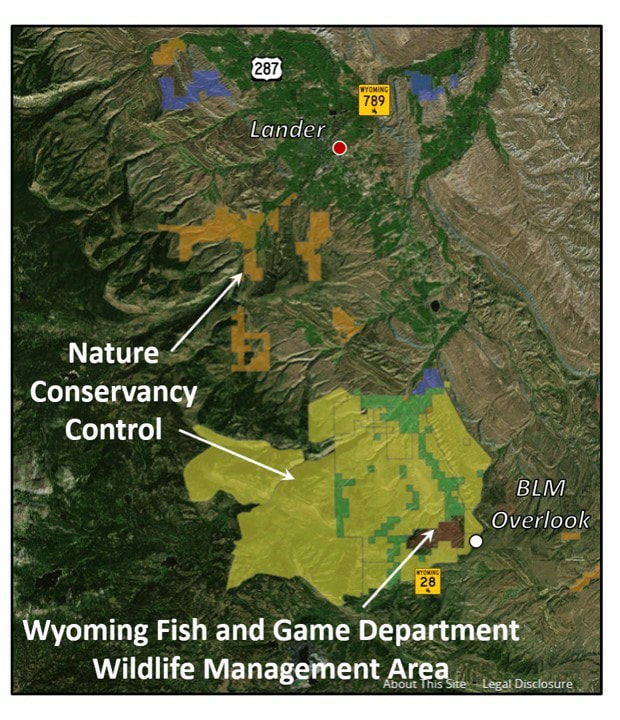 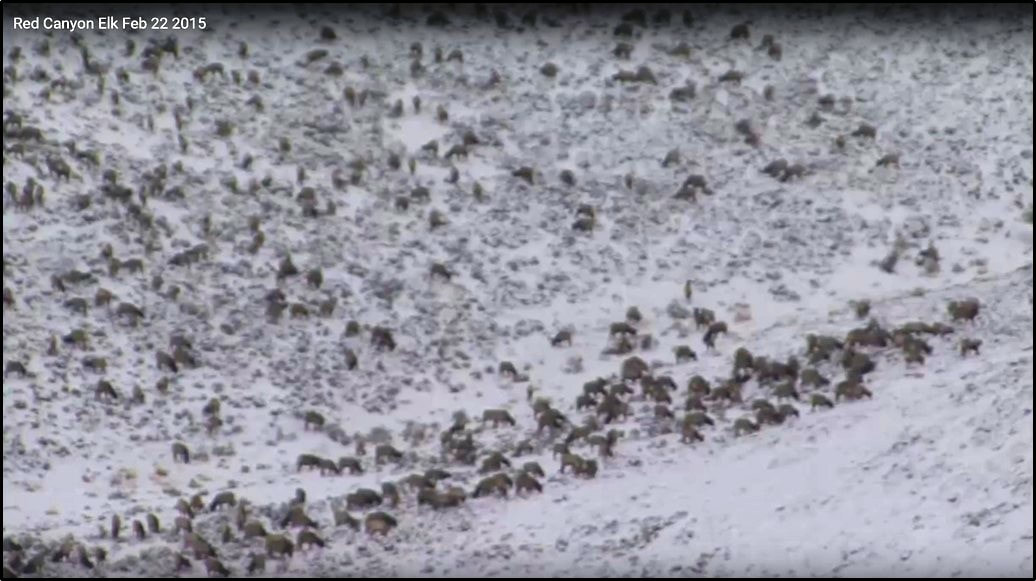 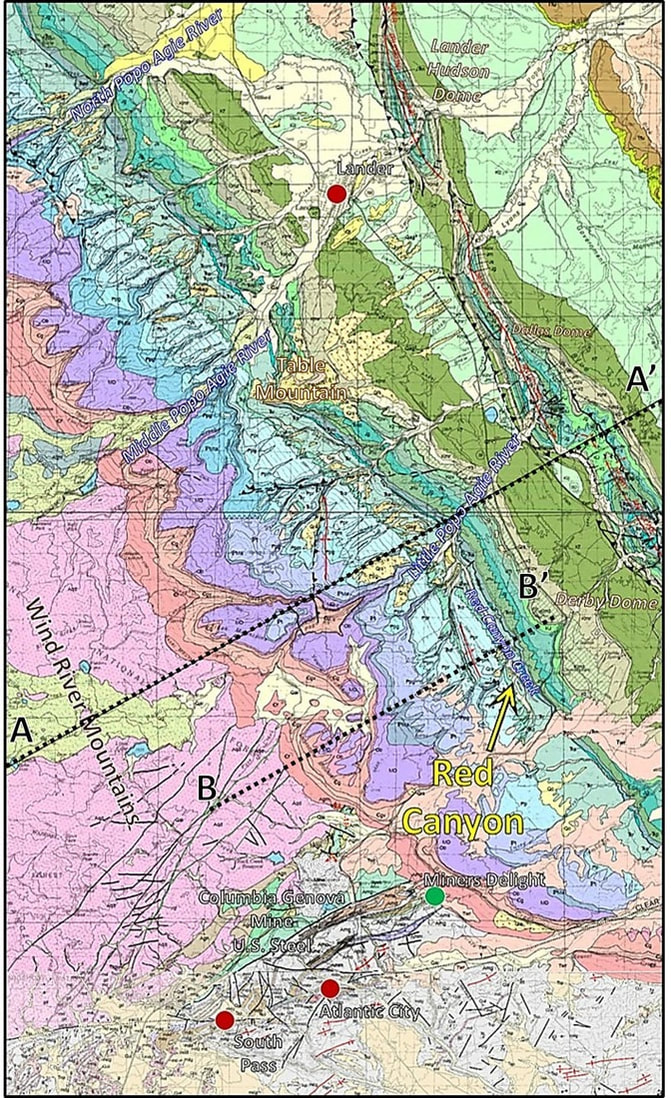 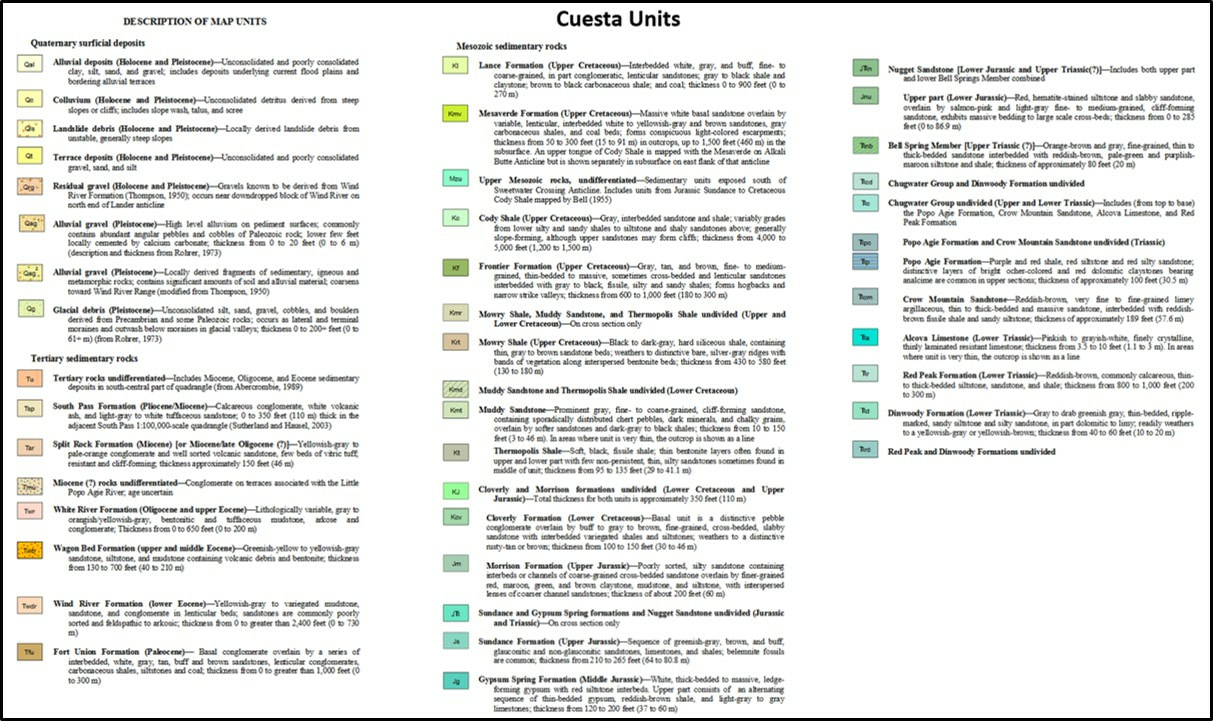 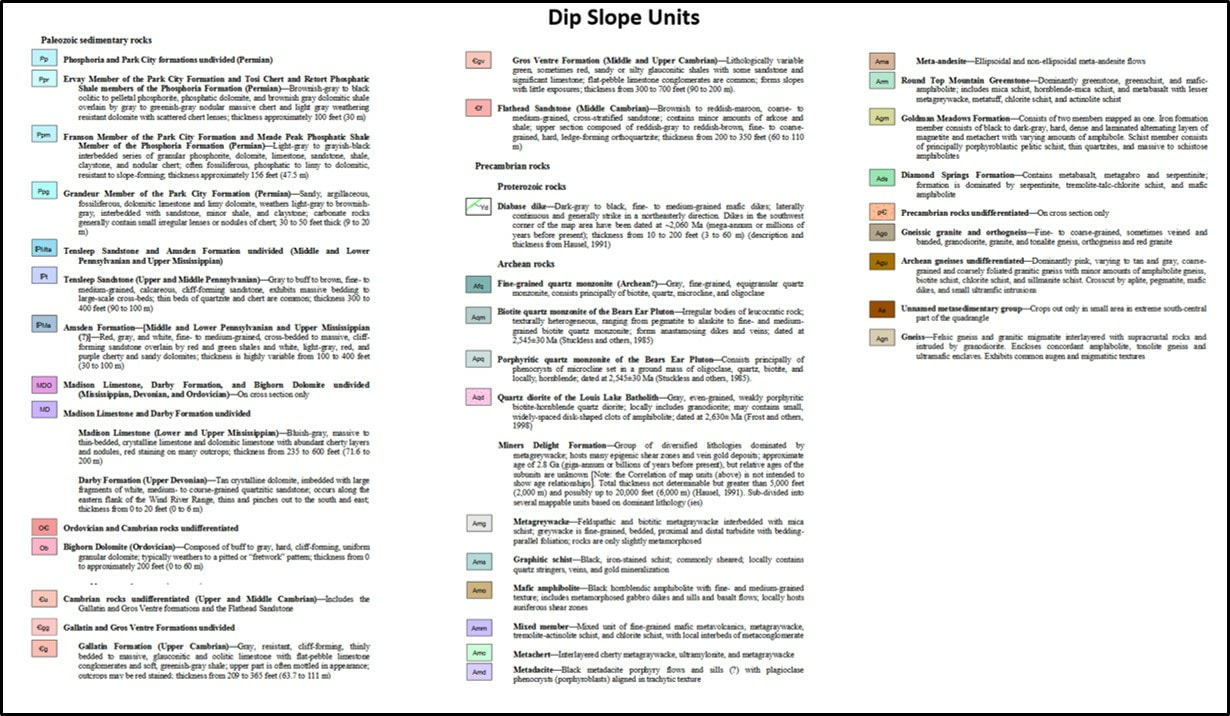 Things to Do in Red Canyon Area

​The southeast end of the Wind River Mountains has a number of interesting places to visit.  Our Geology of Wyoming Sinks Canyon and South Pass websites have details on what to see and how to get there. The Nature Conservancy Red Canyon Ranch website indicates it is open to the public, but gives no contact information.

If you are a geologist or geology inclined, we recommend taking a hike to see the Red Canyon Anticline that has a thrust fault in the core of the fold. It is great structural geology outcrop. Total round trip distance is just under four miles. The map below shows where to park and hike. Good public access with BLM land and the Wyoming Game & Fish Red Canyon Wildlife Habitat Management Area (closed from December 1 to April 30). 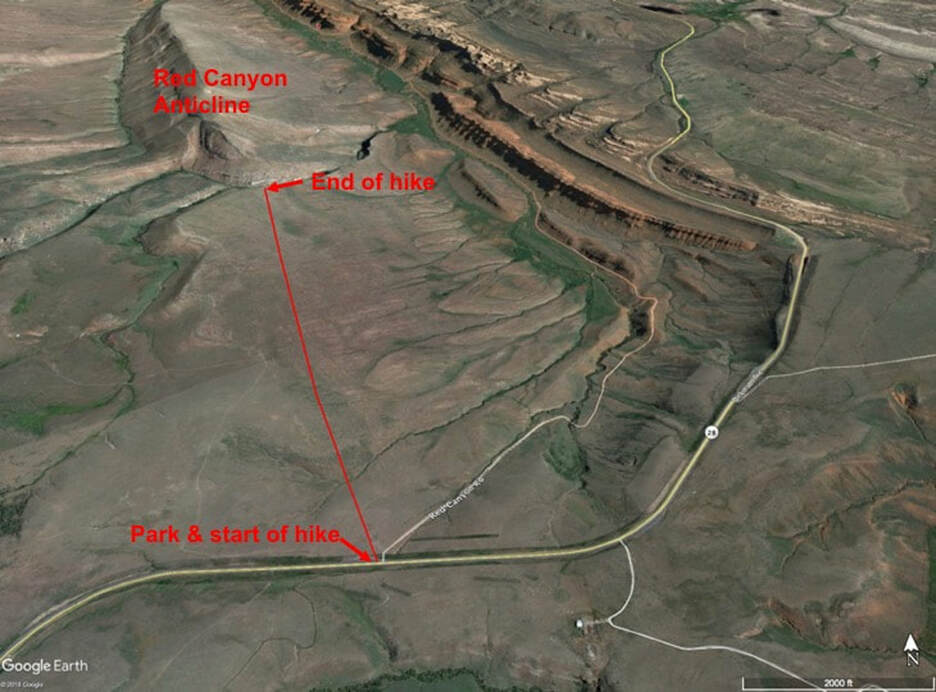 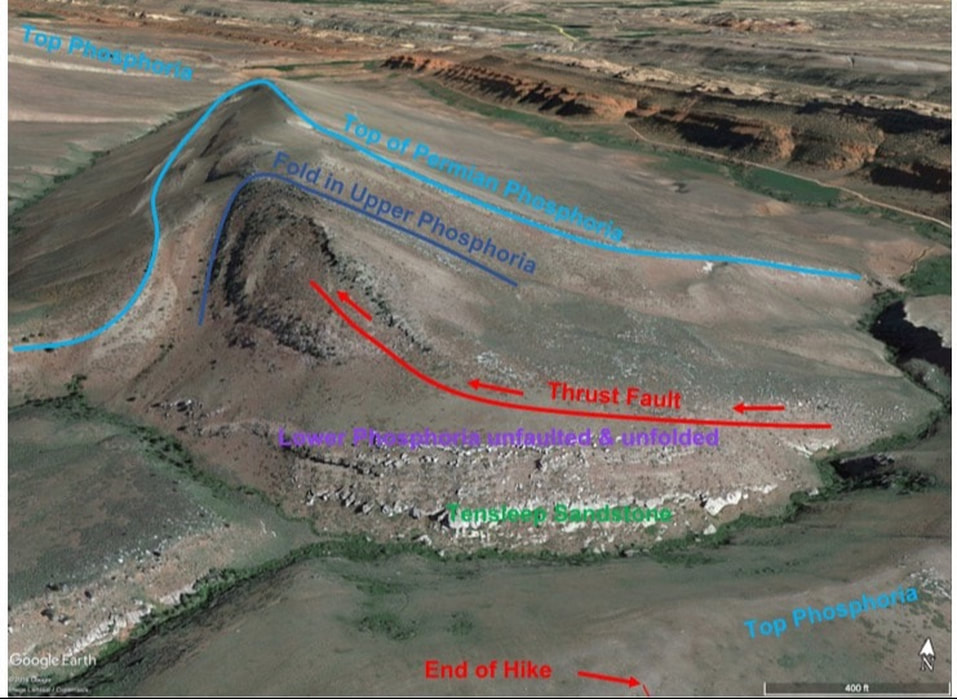 Aerial view of Red Canyon Anticline with thrust fault in the core of the folded Permian Phosphoria Formation. Note that the Lower Phosphoria and Tensleep below the thrust fault is not folded. Also note that the Phosphoria in the foreground located at the end of the hike is not faulted or folded.
Image by Google Earth 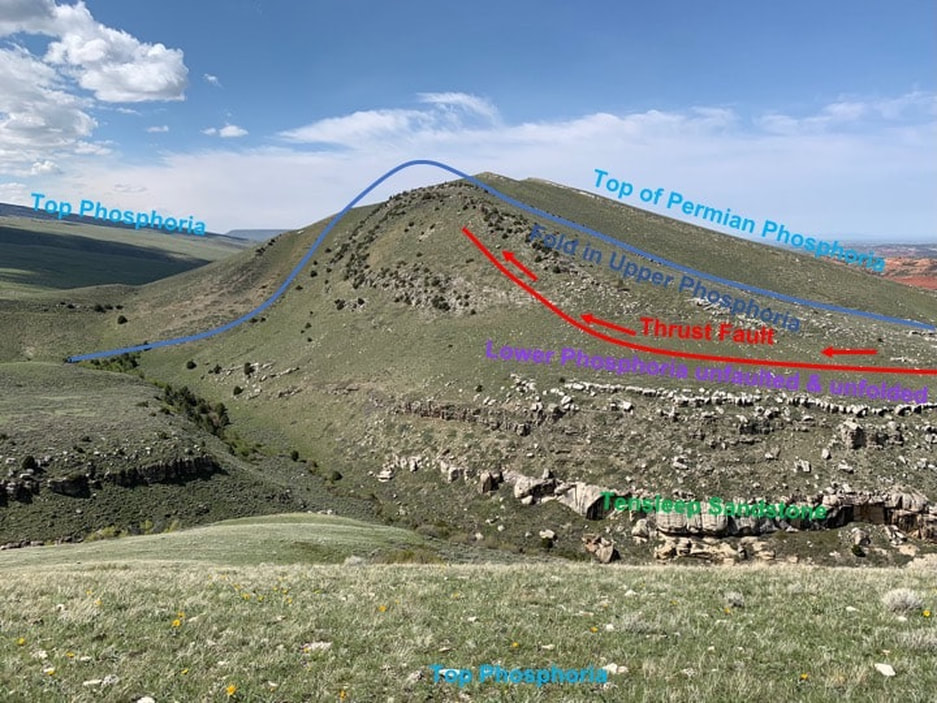