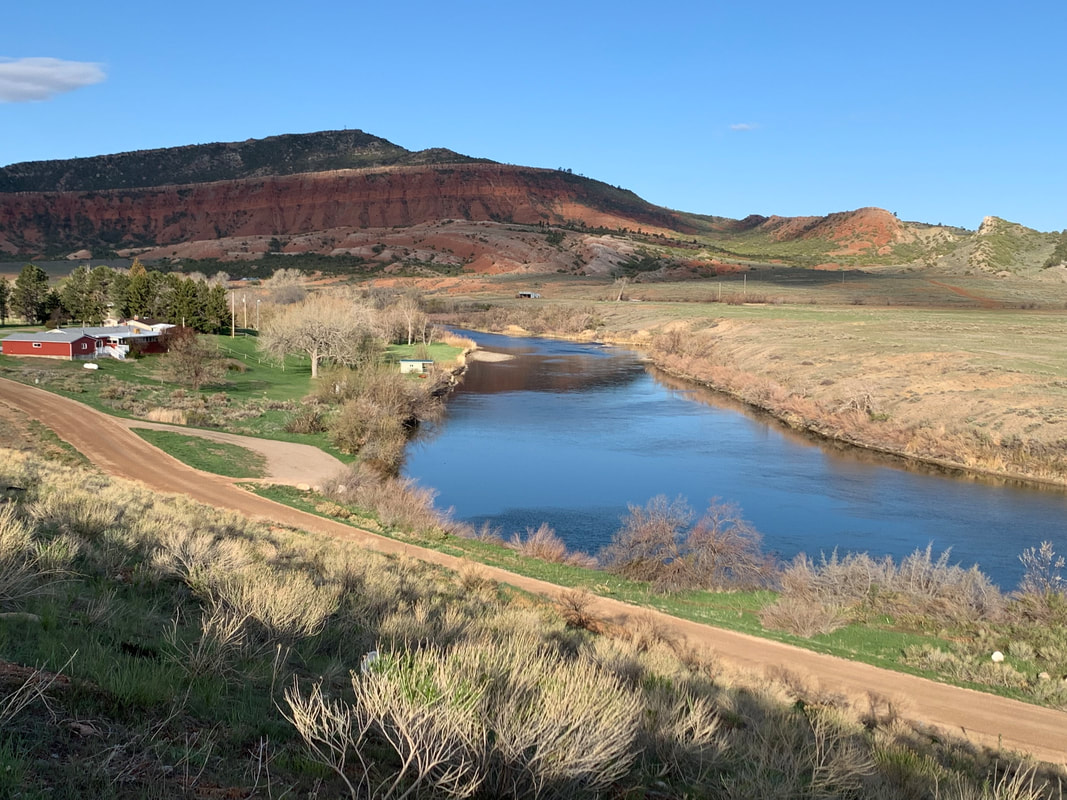 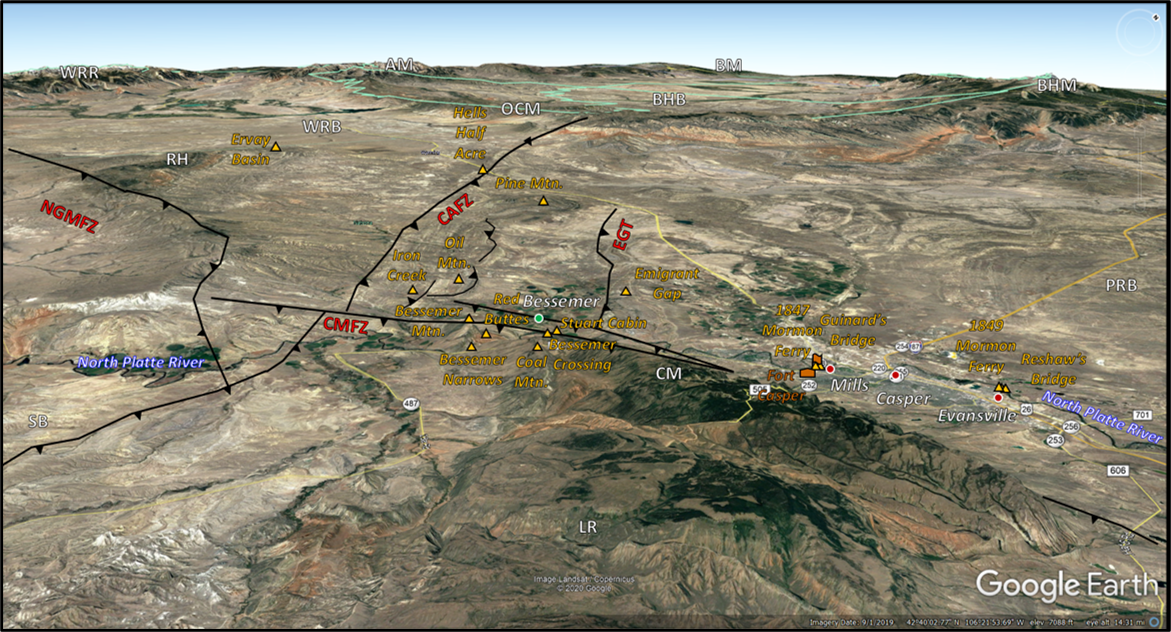 Bessemer Bend (Red Butte crossing) is a large meander loop on the North Platte River about ten miles southwest of Casper. This was the last fording location along the 450 mile North Platte trail from Fort Kearney, Nebraska to west of Casper, Wyoming. Downstream from here emigrants had the choice to pay tolls to various ferries or bridges across the river. Whichever crossing they choose, the trail turned southwestward heading towards the Sweetwater River and then westward toward South Pass over the Wind River Mountains. Bessemer Bend was a favored campsite for travelers and the last safe water for about 20 miles.

Red Buttes on the North Platte River, now known as Bessemer’s Bend, in 1870 (Left: William Henry Jackson, USGS-jwh00277) and in 2016 (Right: CW-2016-06-18-0385).
Image: : https://lensoftimenorthwest.com/galleries/montana-wyoming/green-wind-sweetwater/red-buttes-north-platte-river/.
The town of Bessemer was founded on the west bank of the North Platte river in 1888 by the Wyoming Improvement Company, a group of Nebraska-based investors. They named the site after Englishman Sir Henry Bessemer, inventor of the Bessemer steel-manufacturing process. They used the optimistic nickname “Queen City of the West (or Plains).” Marketing brochures referred to Bessemer’s location that “borders upon the richest and most extensive oil fields now known to the world…immense deposits of coal…mountains of the finest iron ore" and was destined to be a "great railroad, manufacturing, and industrial centre (sic)." Land was reserved for "the future Capitol of Wyoming." When Natrona county was established in 1889, Bessemer competed with Casper for the county seat in an election. The results showed Bessemer received more than twice the number of votes as Casper. This was also twice the number of community residents living in Bessemer at the time.  Bessemer lost the election due to fraudulent voting. The election results were invalidated, and Casper became the county seat. The disappointed residents soon left, the town structures disappeared, and the land today is home to alfalfa fields and a fish hatchery. 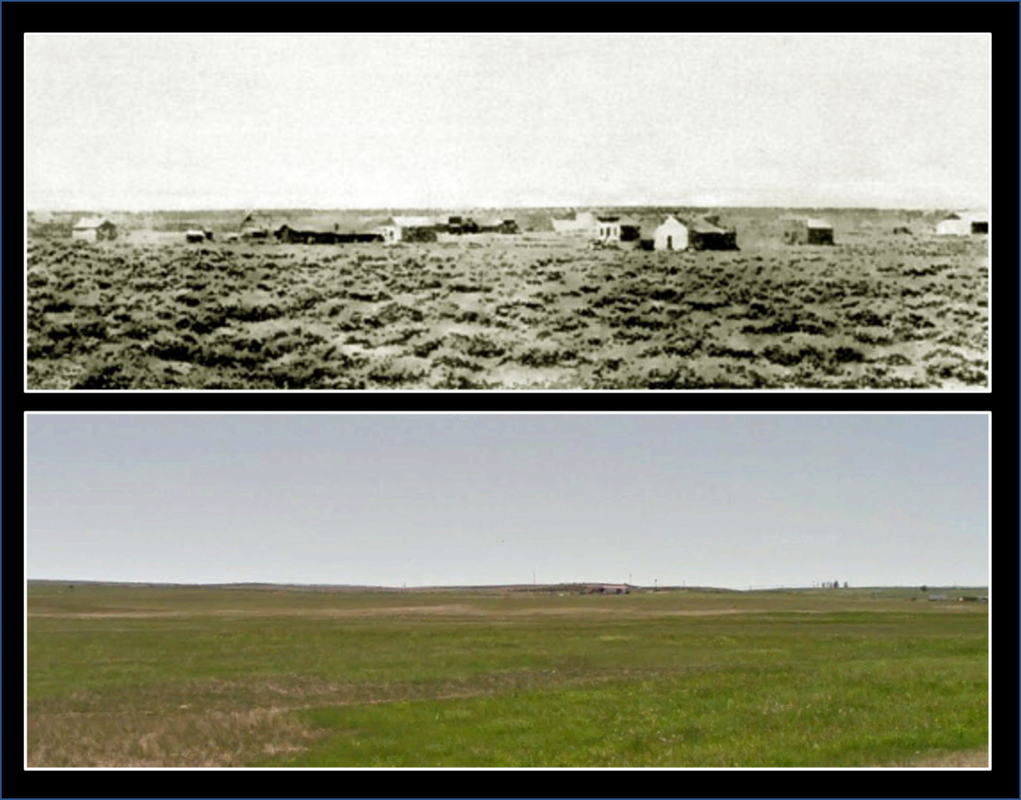 A couple miles southwest of Bessemer Bend, the North Platte River flows over the west nose of the Casper Mountain Anticline (fold). This spot is called the Bessemer Narrows and was carved by the superposed Platte River from a high surface of Tertiary fill. Tertiary fill is preserved at the Granite Mountains (see https://www.geowyo.com/granite-mountains.html)  and east of the Rockies in the western Dakotas, Nebraska and Kansas (see Lusk Area: High Plains of Wyoming, and Goshen Hole Region).

The assemblage of Wyoming, and the North America continent began when plate tectonics suture old Archean crust (cratons), island arcs, and adjacent sedimentary basins (greenstone belts) in a series of collisions during the Proterozoic. The fabric and stresses imparted to the crust influenced the location and orientation of folds and faults seen in the Bessemer area that formed much later during the Laramide mountain building event (70 to 50 million years ago).
​
Casper Mountain is a doubly plunging arch formed by Laramide tectonics. The west-east orientation is inherited from the Precambrian architecture that was reactivated during the Laramide. The left-lateral oblique movement on the Casper Mountain fault zone is typical of the west-east oriented ranges in Wyoming. Structures on the downthrown side of these bounding faults generally trend northwest and are cut off at the fault trace. 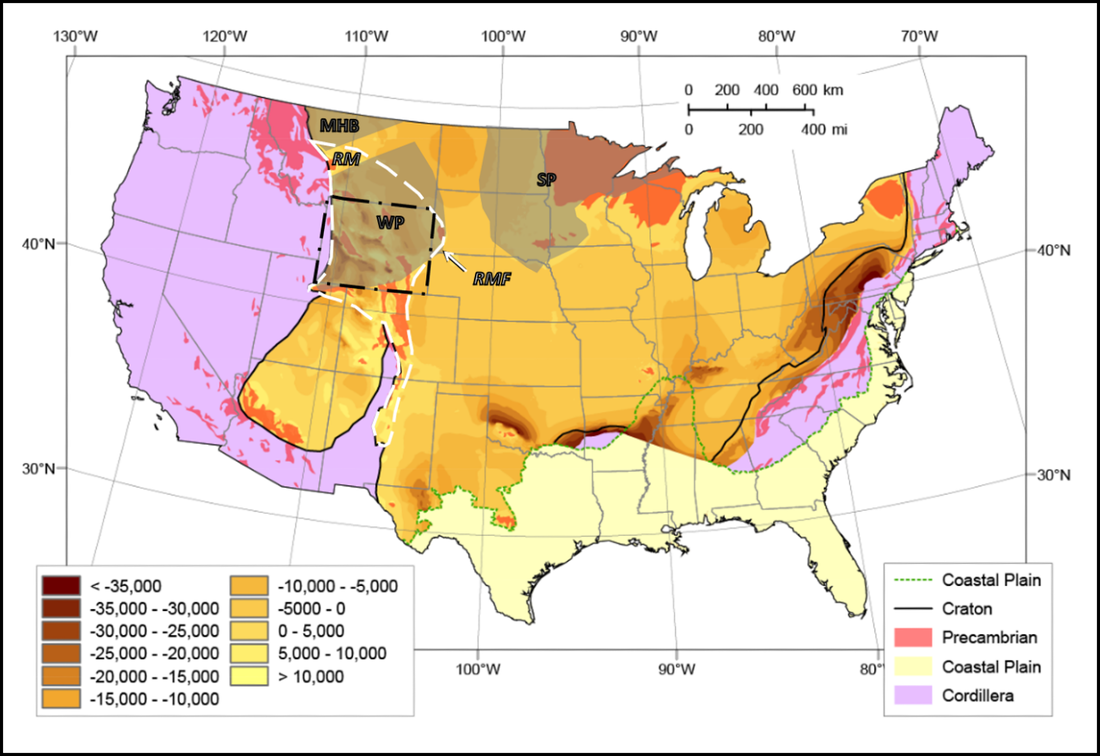 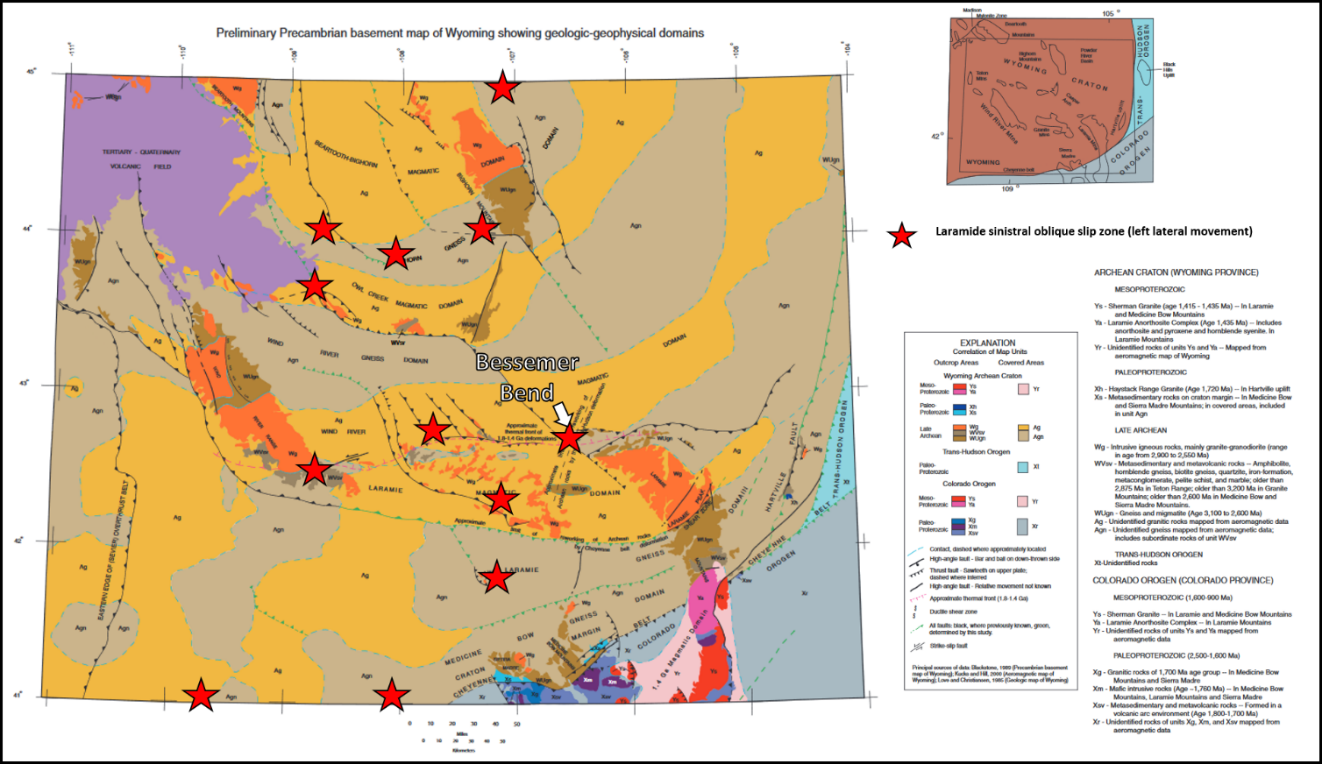 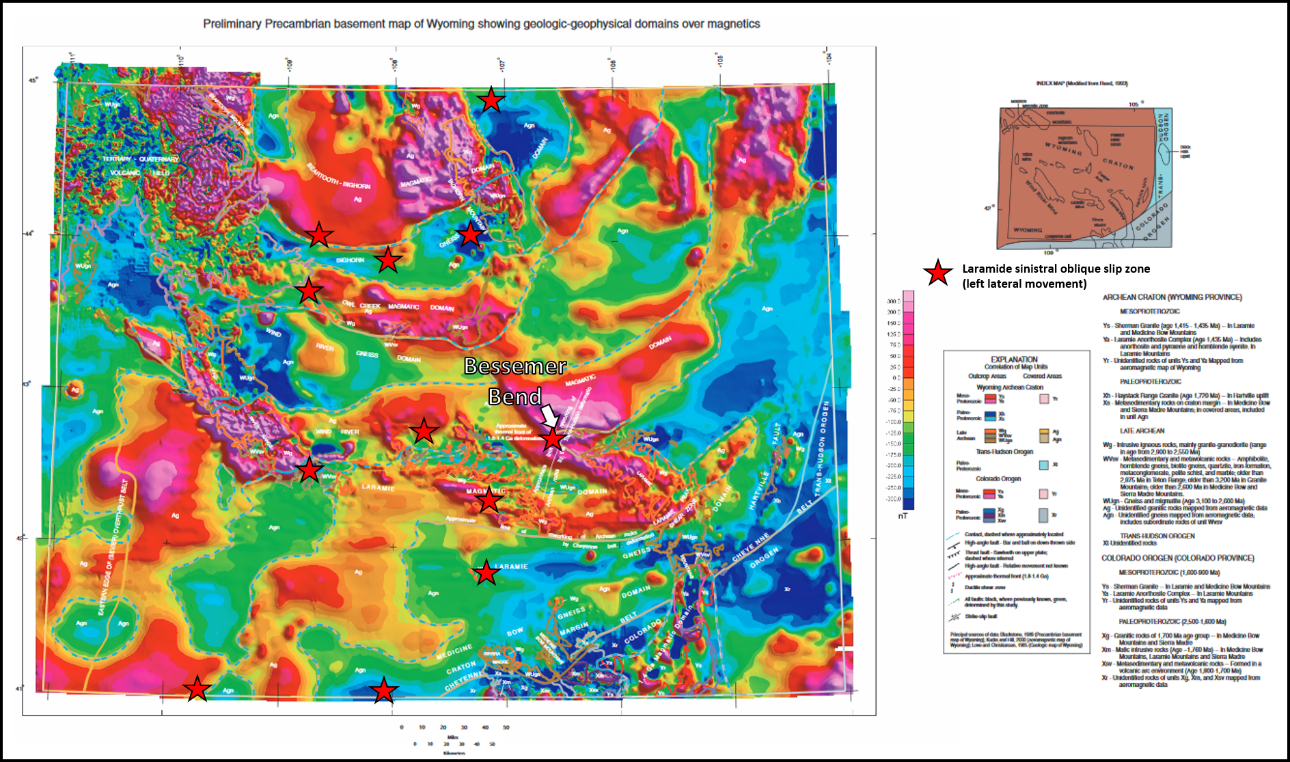 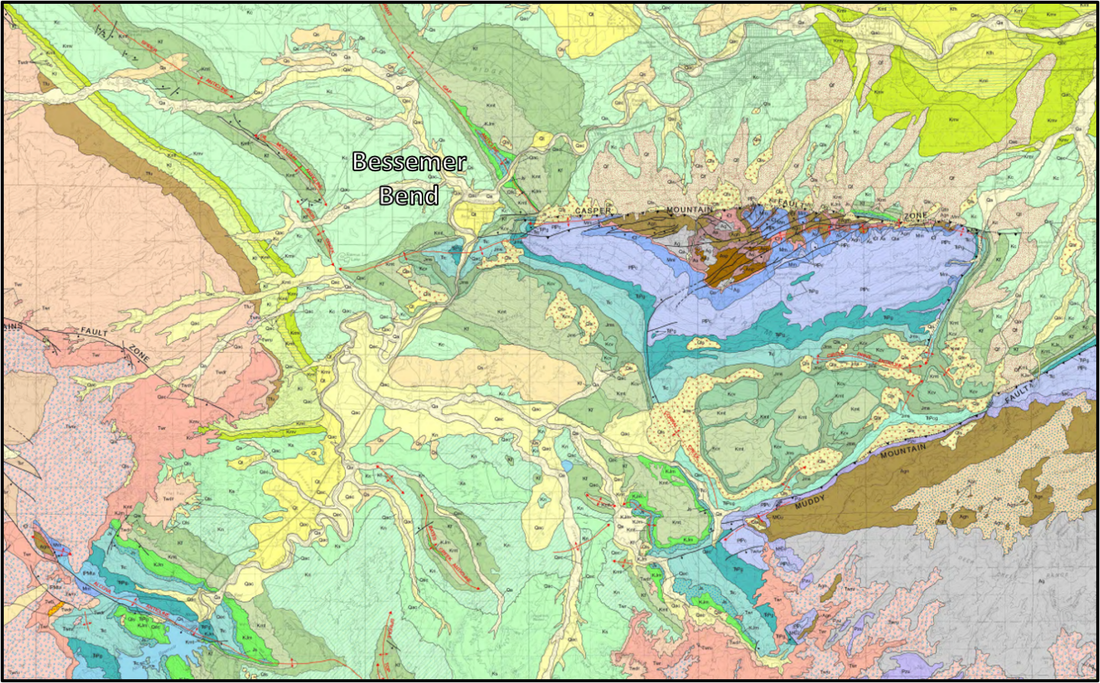 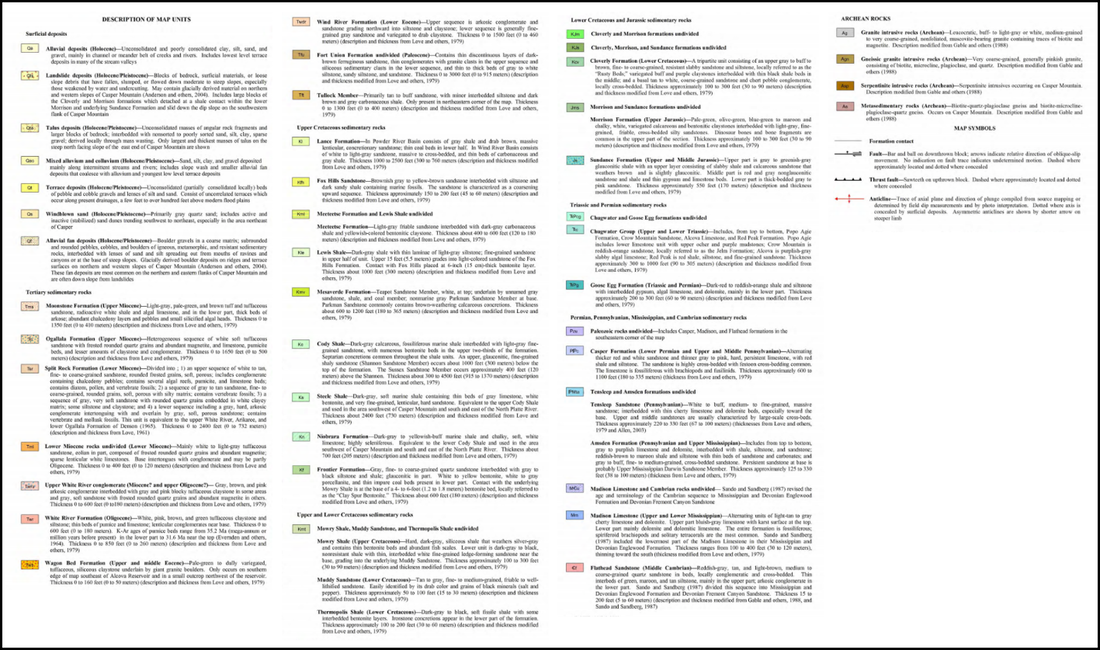 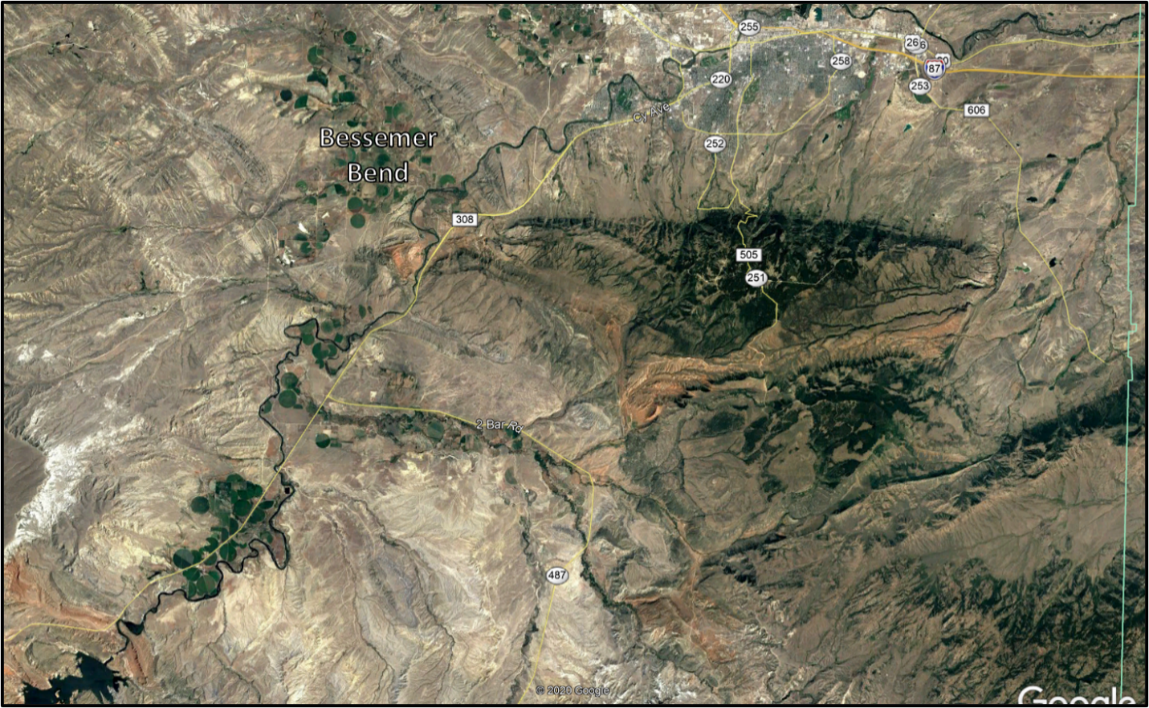 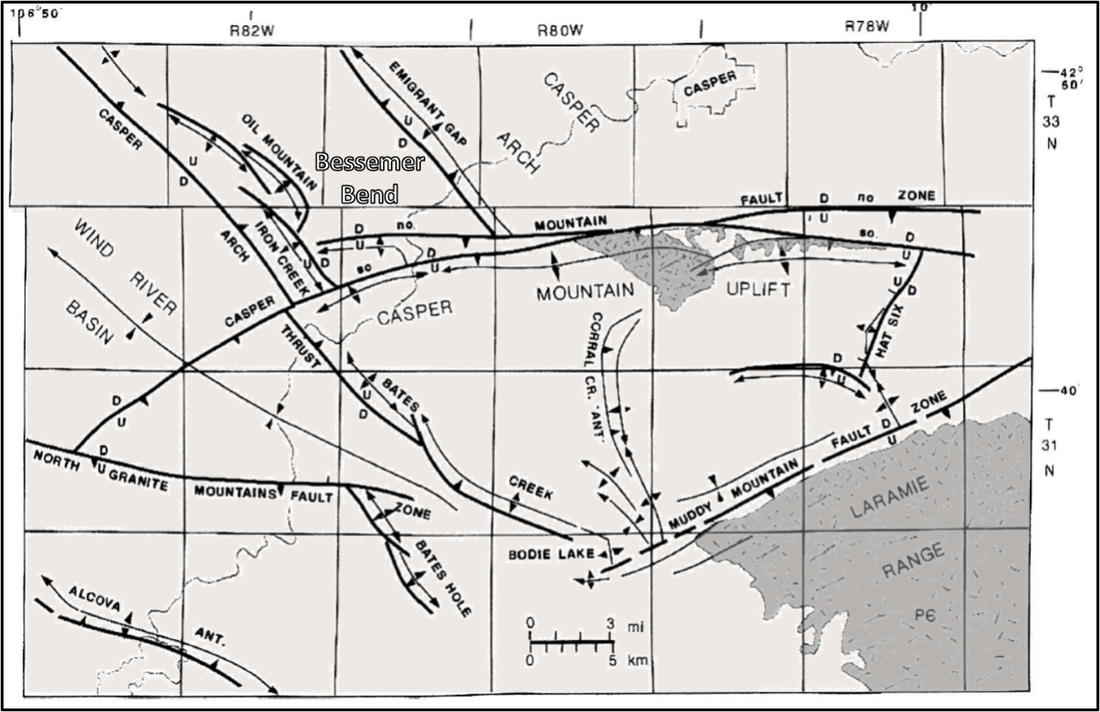 Tectonic map of the Bessemer Bend area and Casper Mountain area. Faults are shown in heavy black lines with teeth on the upthrown side of the reverse faults. Movement direction on the faults is also noted by “D” on downthrown side and ‘U” on upthrown side. Major folds in the sedimentary rocks parallel these faults and are shown with thin black lines at the crest of the folds. Opposing arrows point away from the crest of these folds. Most of the folds shown on this map are anticlines, shaped like an elongated umbrella or elongated upside down bowl.
Image: After Stone, D.S., 2002, Morphology of the Casper Mountain uplift and Related, subsidiary structures, central Wyoming; Implications for Laramide kinematics, dynamics, and crustal inheritance: American Association of Petroleum Geologists Bulletin, v. 86, no. 8, Fig. 2B, p. 1419. 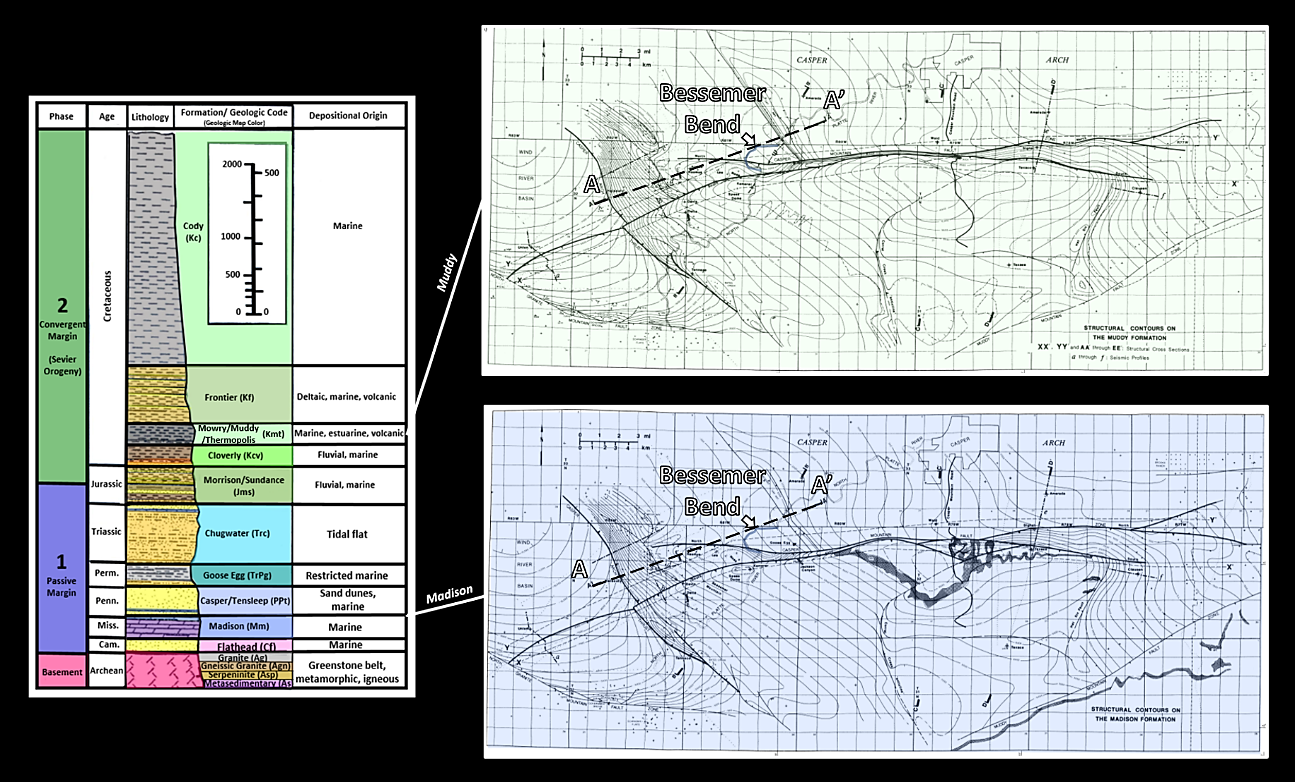 Structural cross section A to A’ is entirely in Casper Mountain footwall or downthrown block. Structure maps in previous figure are made on the Muddy Sandstone (Kmd) shown in a very thin light green line on this cross section and on the Madison Limestone (Mm) shown in darker blue on this cross section.
Image: After: Stone, D.S., 2002, Morphology of the Casper Mountain uplift and Related, subsidiary structures, central Wyoming; Implications for Laramide kinematics, dynamics, and crustal inheritance: American Association of Petroleum Geologists Bulletin, v. 86, no. 8, Fig. 5A, p. 1422. 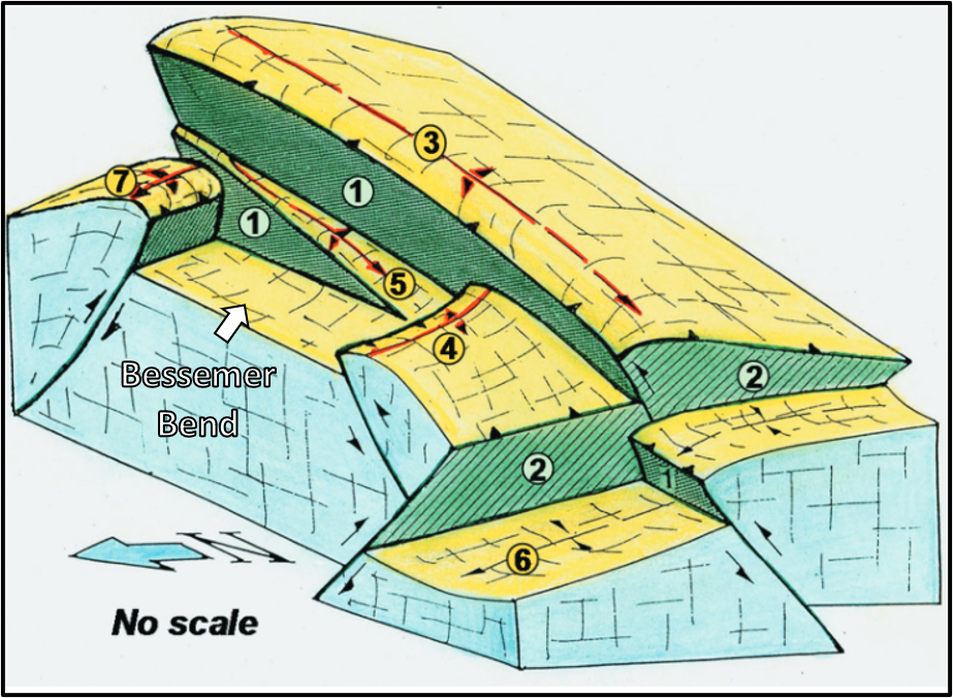 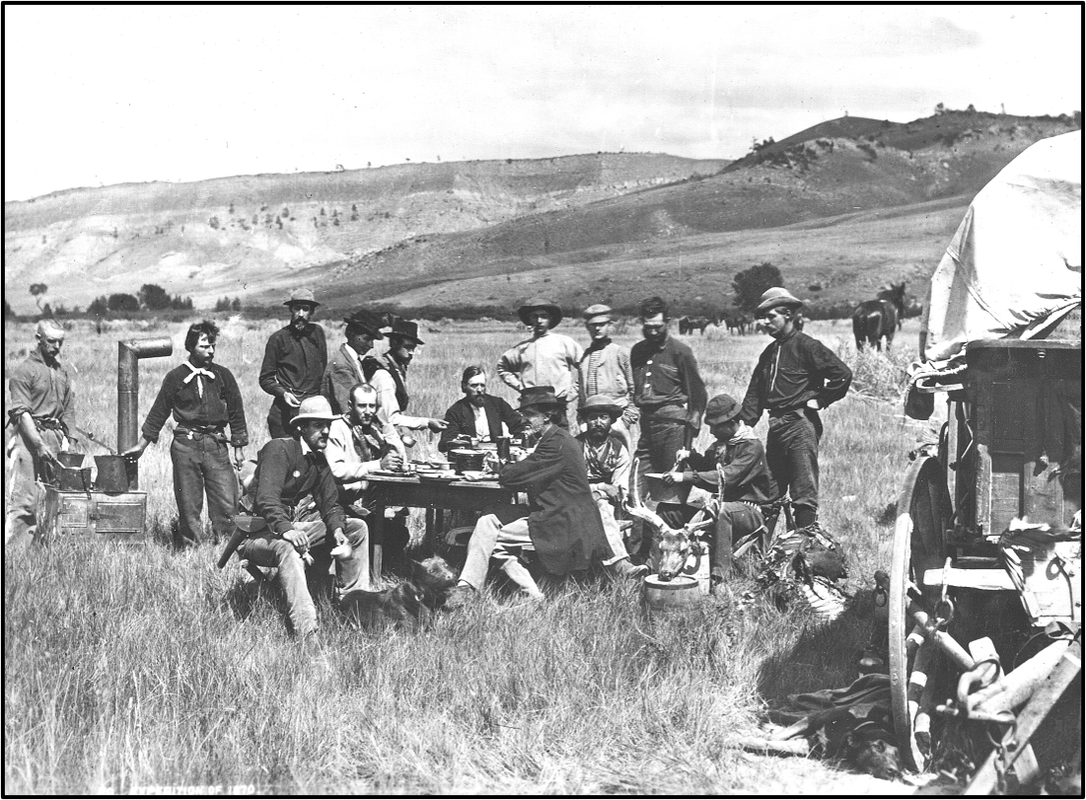 The BLM has a small park on the northwest bank of the North Platte River at the Bessemer Bend emigrant crossing. It is a tranquil spot with a short trail and interpretive signs. Directions: Take Wyoming 220 southwest out of Casper 8.1 miles from the intersection of CY Avenue and Wyoming Boulevard. Turn right on Bessemer Bend Road, travel 2 miles to bridge over North Platte River. After crossing the bridge, the BLM park is immediately on the right. 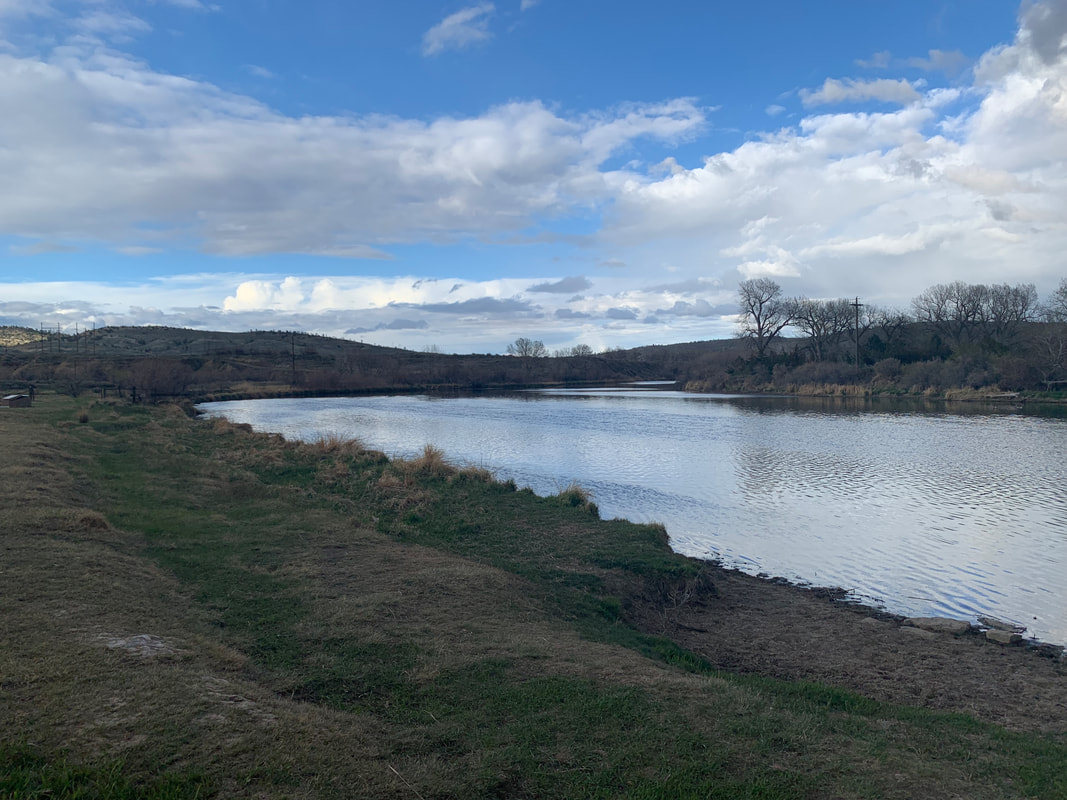