Flaming gorge on the green river 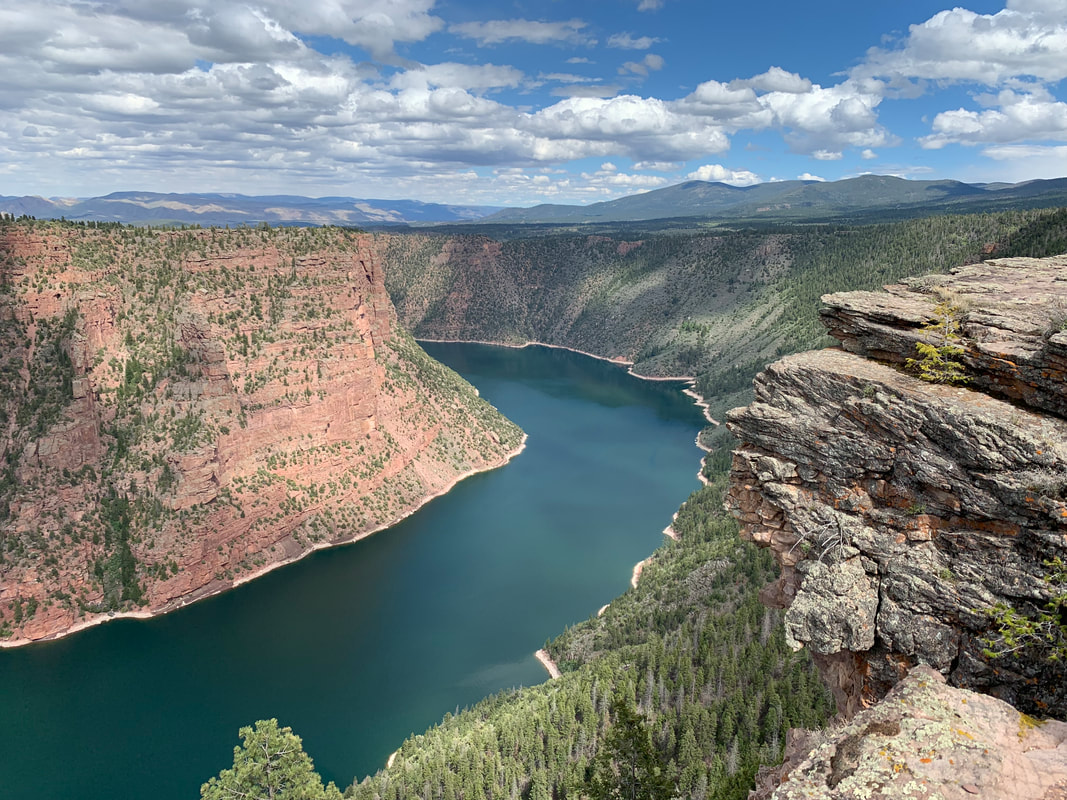 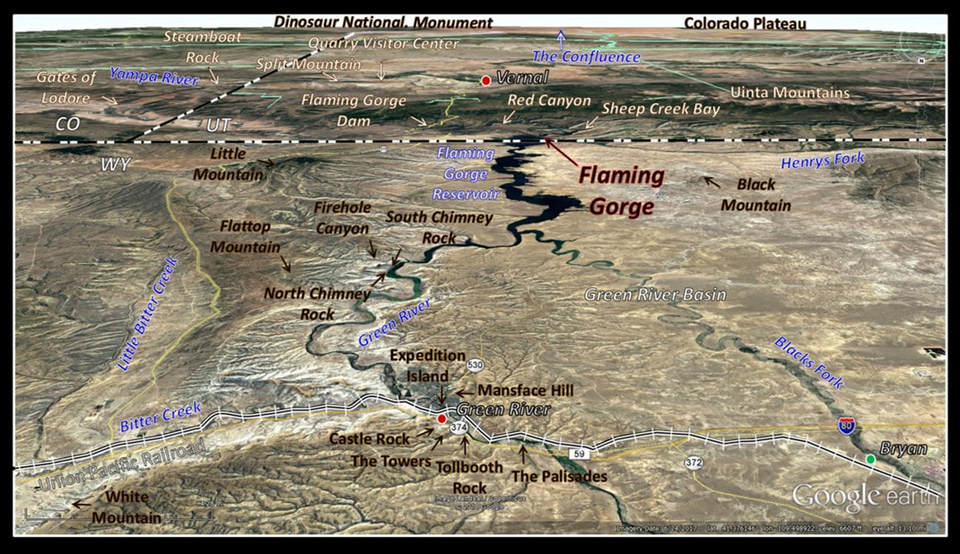 South aerial of Green River area showing water bodies (blue) and landmarks (brown). Location of Union Pacific Railroad shown by track symbol. Towns indicated by colored dots: current (red), abandoned (green).
Image: Google Earth
Originally, the Green River was the headwaters of the Colorado River. It flows 730 miles from its source in the northern Wind River Mountains into southern Utah to the confluence with the Grand River. Their combined flow was the birth of the Colorado River. The Grand River was 350 miles in length. And by geographic tradition the longest tributary stream joining together to begin a river was designated the headwaters. The Green River was more than twice as long and drained a larger basin than the Grand system. But an act of congress in 1921, changed the name of the northeast tributary from the Grand River to the Colorado River and thereby changed the headwater location of the river to the Central Rockies of Colorado. The Green River was thereafter just a tributary to an established river. It still maintained its position as the largest tributary to the Colorado River which today, since 1921, flows within the borders of the state of Colorado. 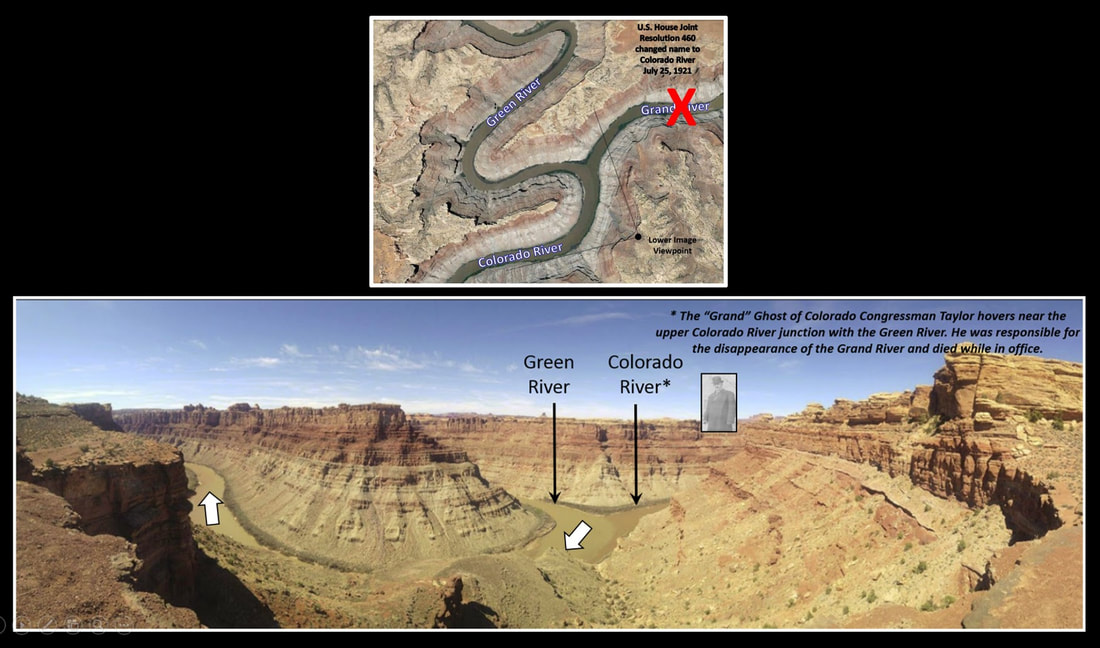 The confluence of the Green and Colorado (formerly the Grand) Rivers, 32 miles southwest of Moab, Utah. White arrows show the direction of the combined flow.
Image: Top: Google Earth; Bottom: Photo by Matt Siewney, 2018, Confluence of the Green and Colorado Rivers, Utah 84532, Google Earth Photo.
​John Wesley Powell led two expeditions down the Green and Colorado Rivers in 1869 and 1872. Completion of the Transcontinental Railroad allowed the expedition to transport their gear and supplies by train to Green River Station in Wyoming Territory. They set out both times from an island in the river now named Expedition Island. The first expedition was a journey into the last major unexplored area on the American continent. Only six of the ten members of the expedition completed the entire three-month journey through terra incognito. But they obtained the first data on the geology and geography of the blank spot on the map of the United States. The spectacular river canyons and landscapes they journeyed through would become the future home of one national wildlife refuge, two national parks, two national monuments, four national recreation areas, and three U.S. Bureau of Reclamation dam and reservoir projects. The fortunes of Green River, Wyoming improved after a drought in 1872 dried up the Blacks Fork River forcing Union Pacific to move the train switching station in Bryan (12 miles west) to a new local headquarters in Green River. The Sweetwater County seat was also moved to Green River in 1875 after the gold boom went bust in south Pass City (see https://www.geowyo.com/south-pass.html). The communities of Bryan and South Pass City however were largely abandoned and became ghost towns.

​The Green River meanders southward in a valley in the Green River Basin of Wyoming between the Moxa Arch (west) and the Rock Springs Uplift (east). It has carved a path through the once continuous, horizontally bedded units of the Eocene Green River and Wasatch Formations into a broken tableland of spires, buttes and scarp walls rising over 500 feet above the stream valley. Many of these eroded remnants have been given names such as the Palisades, Tollbooth Rock, the Towers, and Mansface Hill. Perhaps the most recognized is Castle Rock that dominates the northern skyline of Green River, Wyoming.

1919 panoramic north view of Green River, Wyoming. Expedition Island is in the foreground. Castle Rock is the high butte in the center of the photo. Right-hand side cliff is White Mountain. High bluff on the left, north of the river is Tollgate Rock. The Palisades are to the left of Tollgate Rock. The Towers are located just to the left of Castle Rock. The entire cliff is Green River Formation.
Image: https://commons.wikimedia.org/wiki/File:GreenRiver1919.jpg
​The Green River Formation consists of deposits of ancient Lake Gosiute that filled the basin. These units preserve flora and fauna from the Early to Middle Eocene period, 55 to 45 million years ago. The Laney Member upper unit is a freshwater lake limestone and sandstone to flood plain mudstone and silt. It overlies a brown fluivovolcanic sandstone named the Sand Creek Bed (Powell‘s Tower Sandstone). The volcanic ash source areas were the Absaroka Volcanic field in northwest Wyoming and the San Juan volcanic field in southwest Colorado where volcanics were erupting during deposition of the Green River Formation. The lower unit is saltwater lake oil shale of the LaClede Bed. The Wilkins Peak Member consists of cyclic saltwater lake oil shale, evaporite and mudflat deposits with coal -bearing deposits. The Tipton Member has two units. The upper unit has deposits like the basal Laney and are called the Rifle Bed. The basal unit is a freshwater lake deposit of lean oil shale.

The Wasatch Formation consists of sediments shed from the rising Laramide mountains into fluvial and floodplain environments. These deposits underlie, surround, and interfinger with the lake sediments of the Green River Formation. They are exposed along the frontal folds of the Uinta Mountains about three miles north of the Henrys Fork confluence with the Green River. 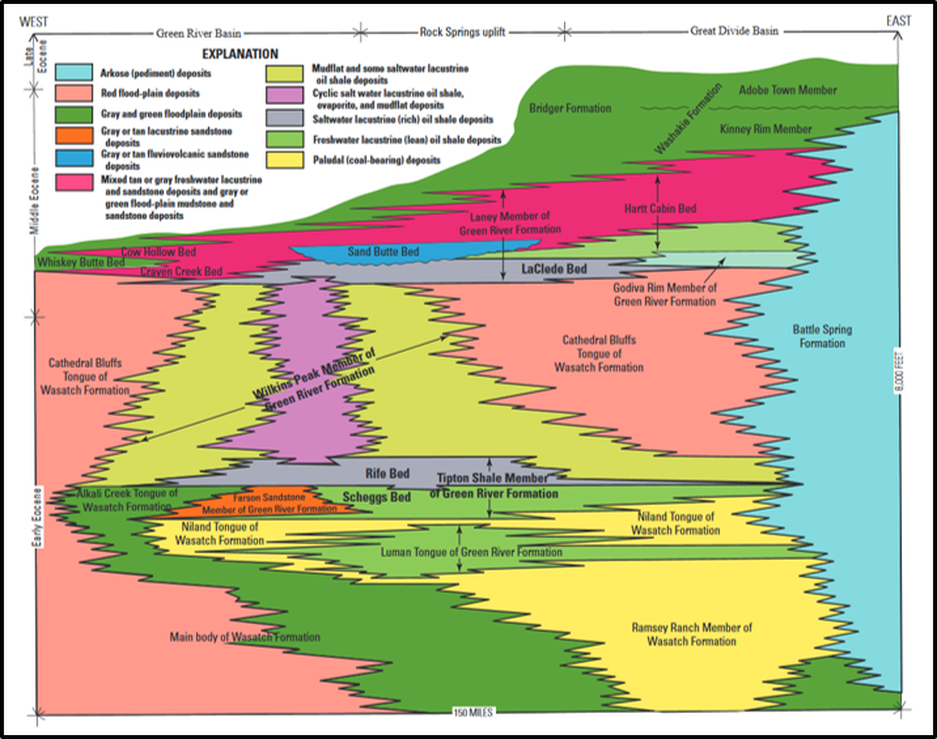 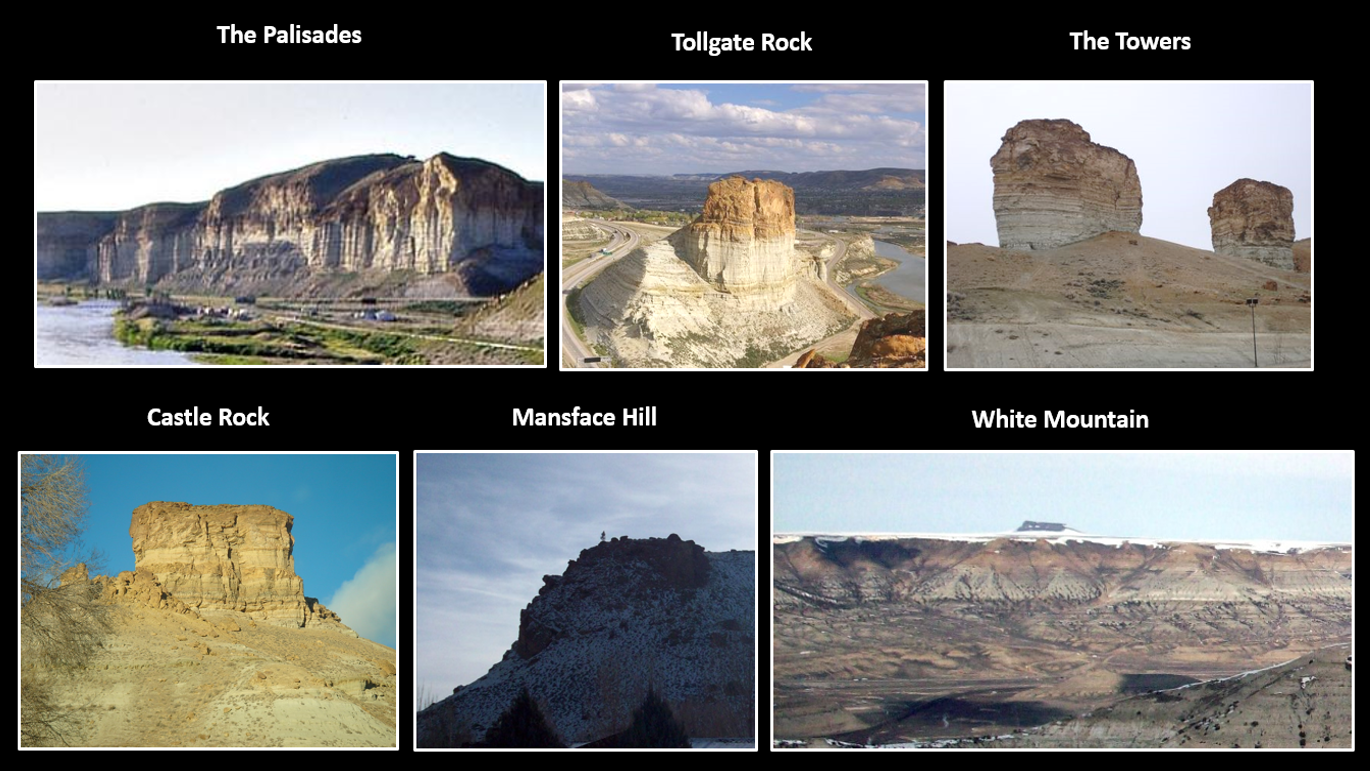 Green River Formation outcrop images near Green River, Wyoming. Powell called the brown sandstone (near the top in images) The Tower Sandstone, and its overlying unit the Plant Beds in 1869. The Hayden Expedition of 1869 named the Eocene fossil bearing beds the Green River Formation. Today the U.S. Geological Survey revised the nomenclature and divided the Green River Formation into members and units. The members from youngest to oldest are the Laney, The Wilkins Peak, and the Tipton Shale. Pilot Butte of the Leucite Hills can be seen in the center of the White Mountain photo.
Image: The Palisades: https://www.travelwyoming.com/cities/green-river
Tollgate Rock: https://www.pinterest.com/pin/184366178471796074
The Towers: https://www.pinterest.com/pin/35817759505936482
Castle Rock: https://en.wikipedia.org/wiki/Green_River,_Wyoming#/media/File:Castle_Rock_1.jpg
Mansface Hill: https://upload.wikimedia.org/wikipedia/en/9/9d/Mansfacenorthface.jpg
White Mountain:https://upload.wikimedia.org/wikipedia/commons/d/df/WhitemountainWY.jpg 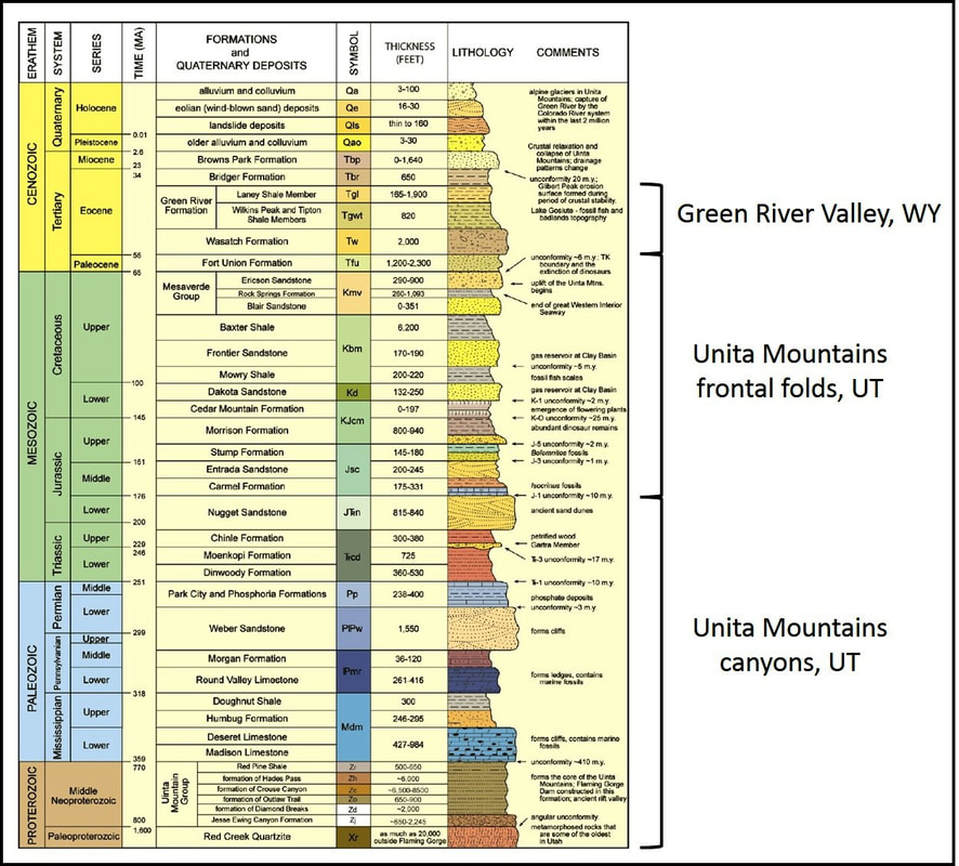 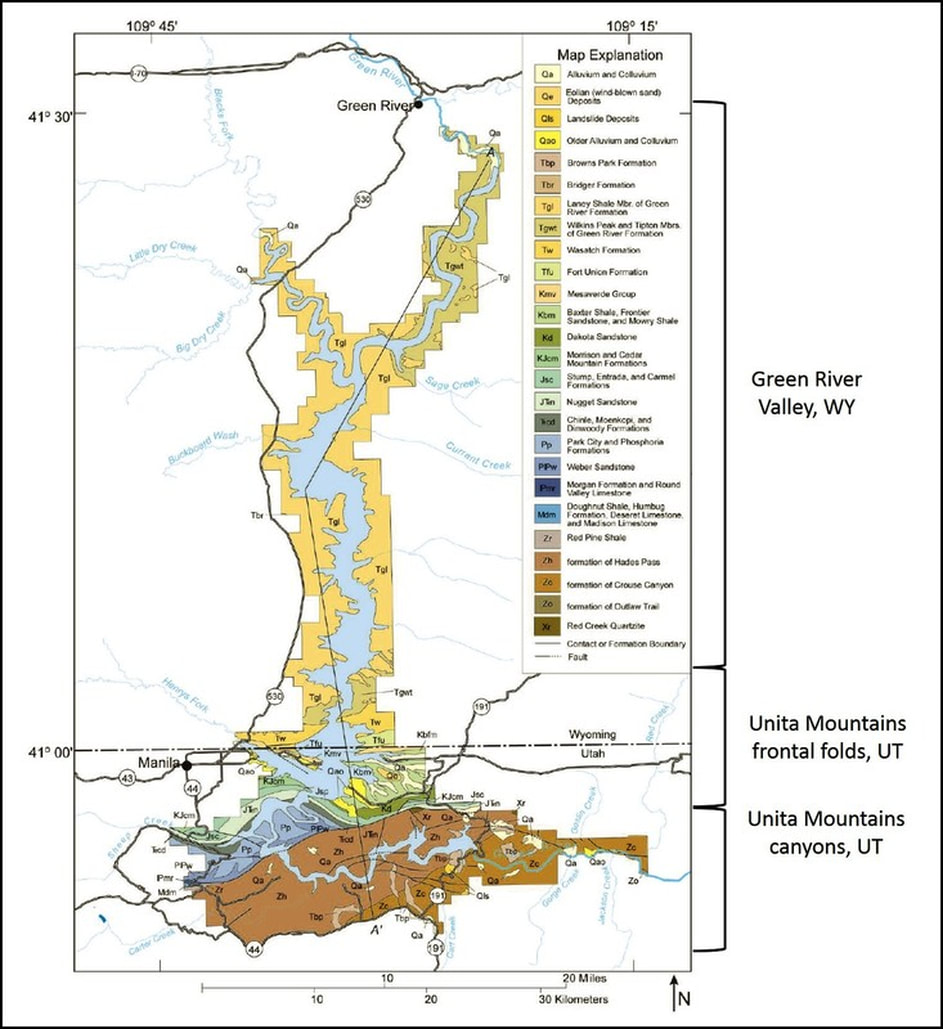 Flaming Gorge is located near the Cheyenne Belt suture of the Archean (> 2.5 Ga) Wyoming Craton with Proterozoic-age Mojave (2.0-1.7 Ga) and Yavapai (1.8-1.7 Ga) terranes. Laramide tectonism (70-50 Ma) elevated the surrounding mountains and uplifts while the Green River Basin subsided. The Precambrian core is exposed in the Uinta and Wind River Mountains. Cretaceous beds are the oldest rocks exposed on the Rock Springs Uplift to the east. The Moxa Arch structure is buried beneath Tertiary units. 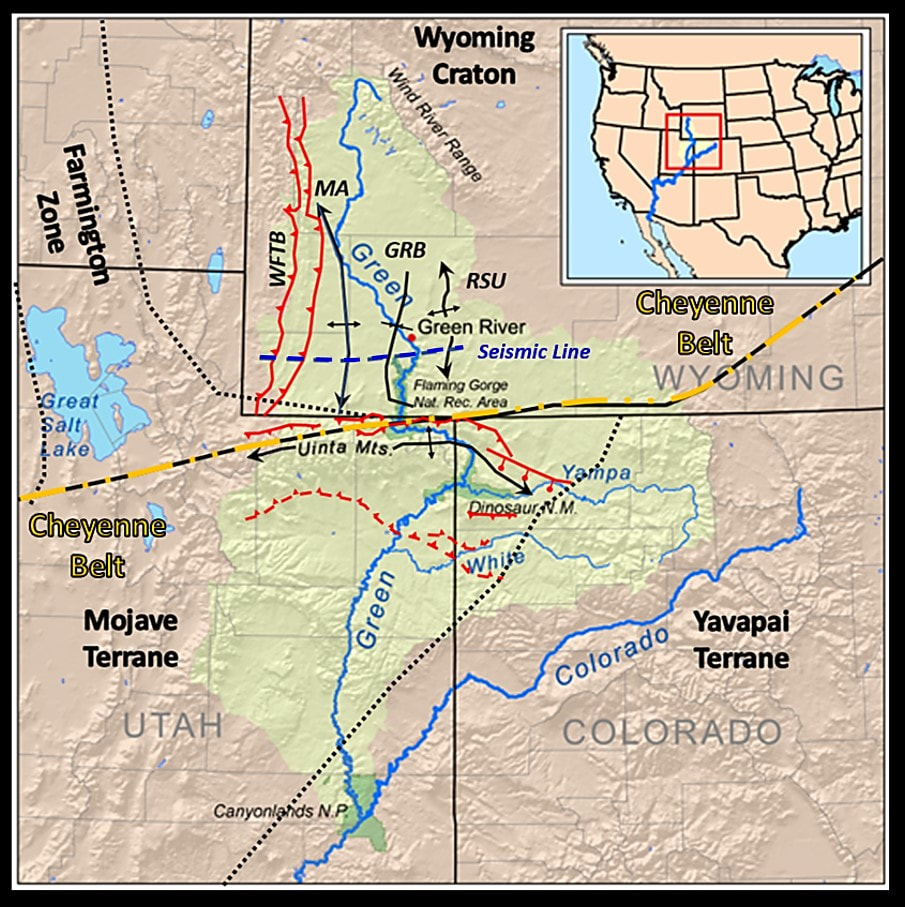 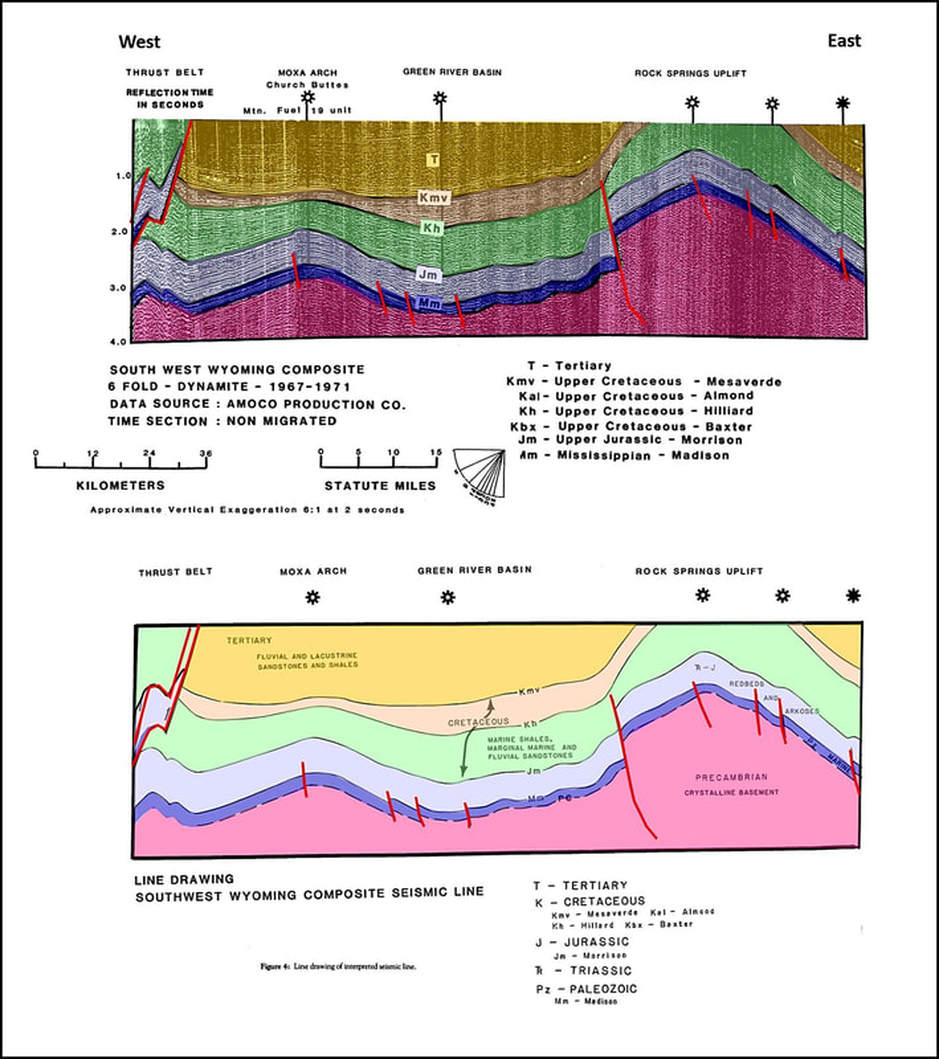 “The river is running to the south; the mountains have an easterly and westerly trend directly athwart its course, yet it glides on in a quiet way as if it thought a mountain range no formidable obstruction to its course. It enters the range by a flaring, brilliant, red gorge, that may be seen from the north a score of miles away.” (Powell, J.W., 1879, Exploration of the Colorado River of the West and its Tributaries: Explored in 1869,1870, 1871, and 1872 under the direction of the Secretary of the Smithsonian Institution, Chapter II, P. 11; https://archive.org/details/explorationcolo00goodgoog). 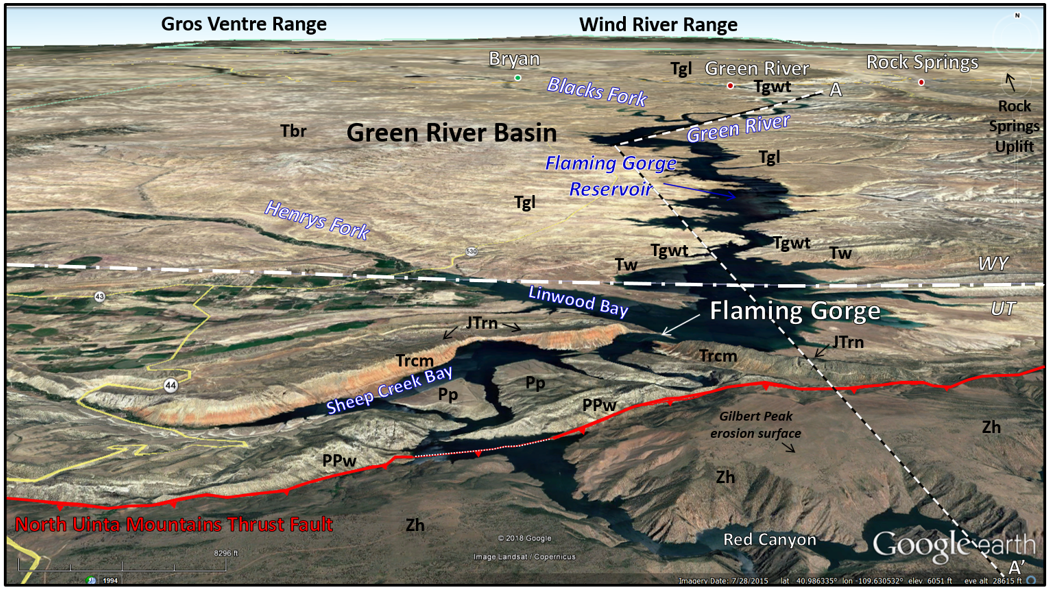 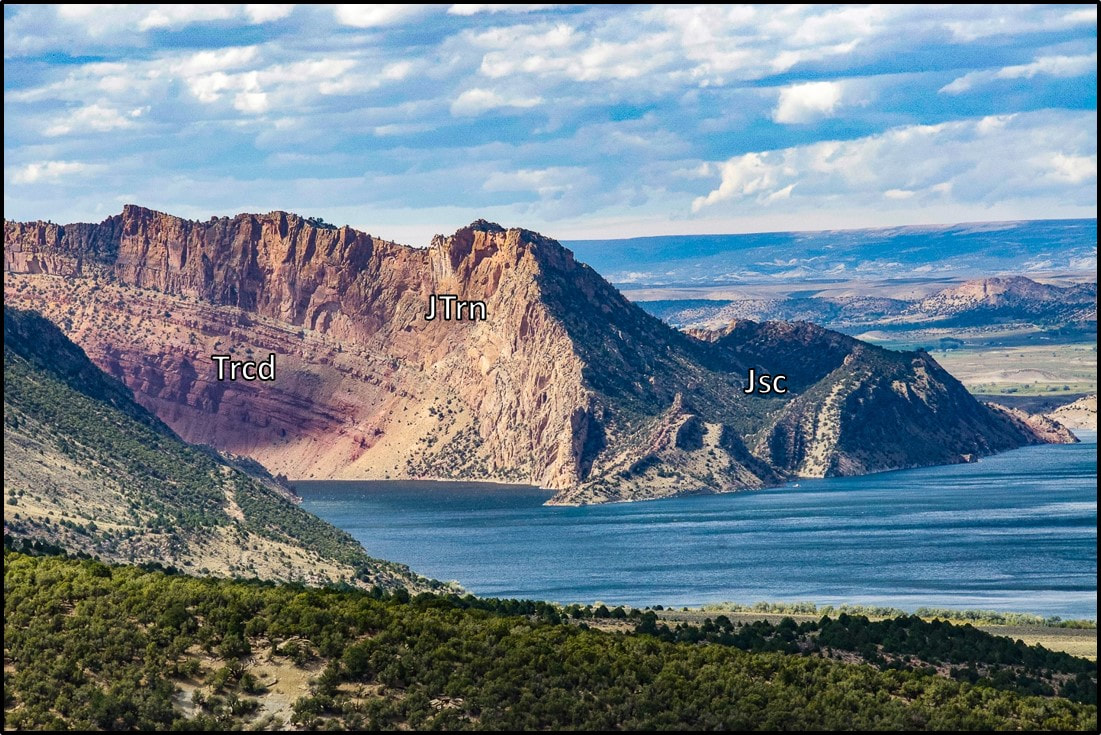 Western wall at the mouth of Flaming Gorge. The photo shows the northwest plunging nose of the Linwood Anticline and the “flaming” red hue of the Triassic units. Geologic notation: Jsc: Jurassic Stump, Entrada, and Carmel Formations; JTrn: Jurassic-Triassic Nugget Sandstone (aka Glen Canyon Sandstone); Trcd: Triassic Chinle, Moenkopi, and Dinwoody Formations.
Image: After http://www.flaminggorgecountry.com/Flaming-Gorge-Green-River-Basin-Scenic-Byway-WY
Powell proposed two theories to explain the anomalous course of the Green River through the Uinta Mountains. A stream that erodes down from above into pre-existing buried structures is called a superimposed river. A pre-existing stream that can keep pace with the uplift of a structure is an antecedent river. The Green River is a textbook example of a superimposed stream.
​
The evolution of the Green River drainage is displayed with sequential paleogeographic maps below. 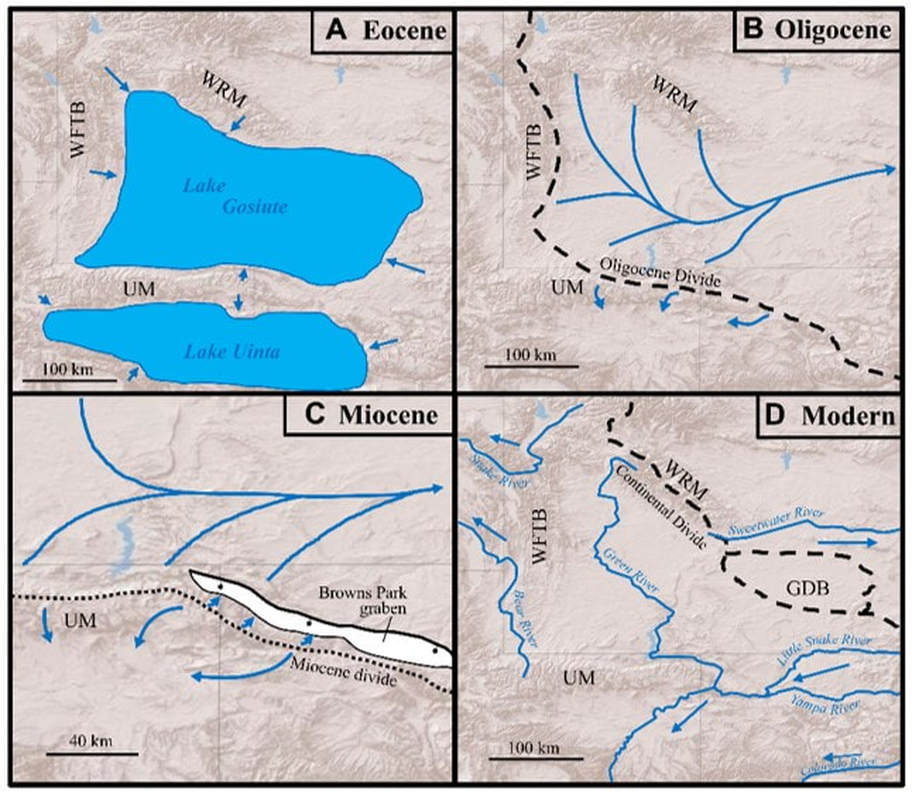 Paleogeographic maps displaying the evolution of drainage patterns in the Uinta Mountain area. (A) During the Eocene internal drainage was established due to Laramide structuring. A series of lakes developed in basins north and south of the Uinta Mountains. UM: Uinta Mountains, WFTB: Wyoming fold and thrust belt, WRM: Wind River Mountains. (B) During the Oligocene the ancestral Green River flowed eastward to the Mississippi River. (C) During the Miocene the Eastern Uinta Mountains collapsed because of regional Basin and Range tension. The Browns Park graben developed with down-to-the-south offset. (D) Post-Miocene collapse, headward erosion of a stream flowing through the graben captured the Green River and redirected its flow southward.
Image: Aslan, A., Boraas-Connor, M., Sprinkel, D.A., Becker, T.P., Lynds, R., Karlstrom, K.E., Heizler, M., 2017, Cenozoic collapse of the eastern Uinta Mountains and drainage evolution of the Uinta Mountains region: Geosphere 14 (1), Fig. 2, p. 117.
​The Flaming Gorge on the Green River presents a geologic landscape of unparalleled beauty and solitude. The dam was constructed by the U.S. Bureau of Reclamation from 1958 to 1964. The Green River valley was flooded over 90 miles northward by the reservoir to within 10 miles of Green River, Wyoming. The geologic wonders that start with the Green River continue their winding path across the Colorado Plateau, joining with the Colorado River to carve the Grand Canyon of Arizona. The river system finally ends its journey in the Gulf of California. The route of the meandering Green-Colorado system is about 1,730 miles in length, and it flows through over 3 billion years of geologic history.

Three must see places at Flaming Gorge are the Flaming Gorge Dam, the overlook at the Red Canyon Visitor Center and the Sheep Creek Canyon Geological Area. 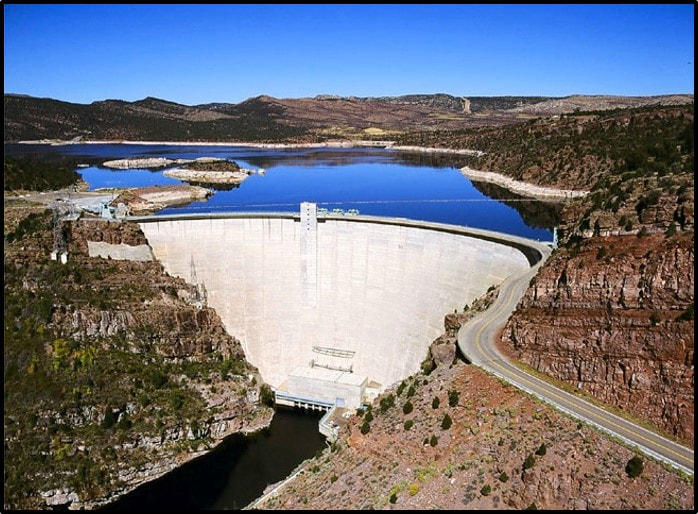 ​The area surrounding the Red Canyon Visitor Center is perched high on the edge of a cliff with short walks to amazing views of the reservoir and red outcrops of the Precambrian Hades Pass Formation. Very memorable! It is located in the southern part of Flaming Gorge Recreation Area just off of Utah 44. 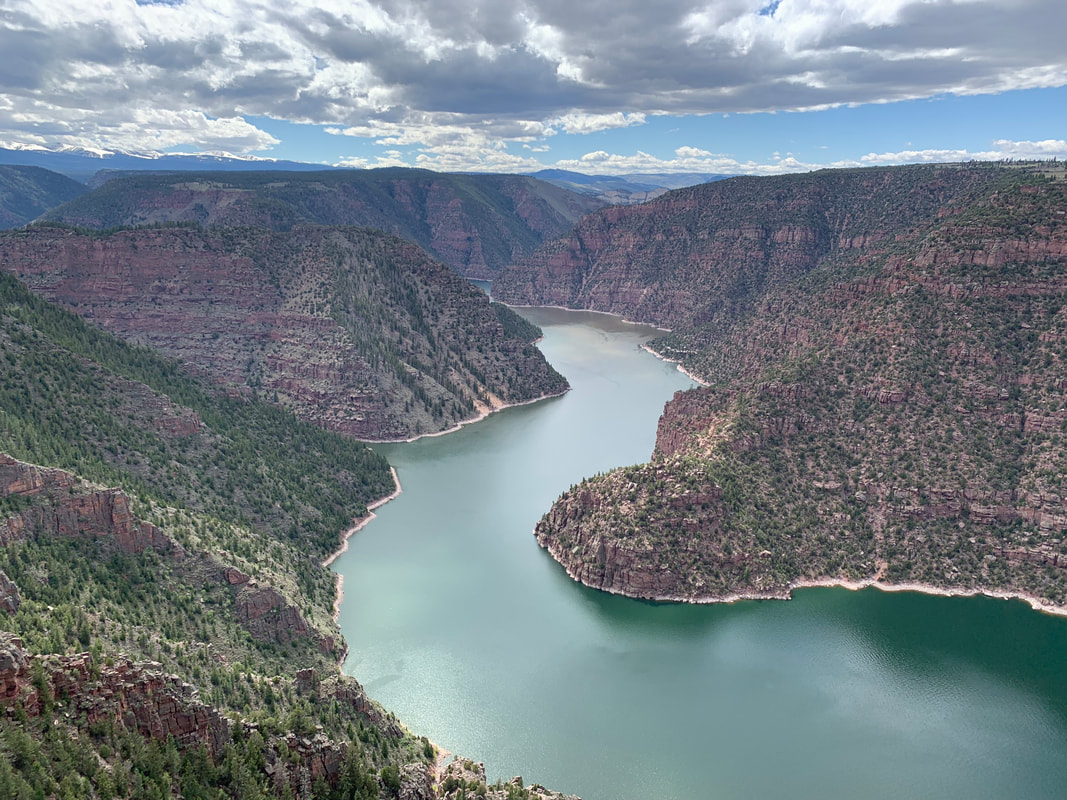 ​If you are a geologist or geology inclined, you will think the loop road through the Sheep Creek Canyon Geological Area is spectacular. I get shivers just thinking about the mountain front folds, faults, and outcrops in this canyon. Located south of Manilla on the Ashley National Forest, it is on the southwest edge of Flaming Gorge Recreation Area on a ten mile mostly paved scenic loop road off of Utah 44. Formation names with geologic periods are posted on road signs in the canyon. I drove it from south to north and wish I could have ridden my mountain bike down this road as it drops from 8,200 feet to 6,400 feet. The Unita Mountains are bounded on the north flank by a large fault. Most of the movement on the fault occurred during the Laramide Orogeny (70 to 40 million years ago) that uplifted the Uinta Mountains to the south and dropped the Green River Basin to the north. The sedimentary rocks on this north edge of the Uinta Mountains are dramatically folded and faulted with rocks dipping northeast into the Green River Basin. Younger formations are exposed as you travel northeast through the canyon. As you drive past the Madison Formation look for the Big Spring, the discharge for the Sheep Creek Cave. The cave entrance above the Big Spring is gated and open to the public through a permit system with the Forest Service. 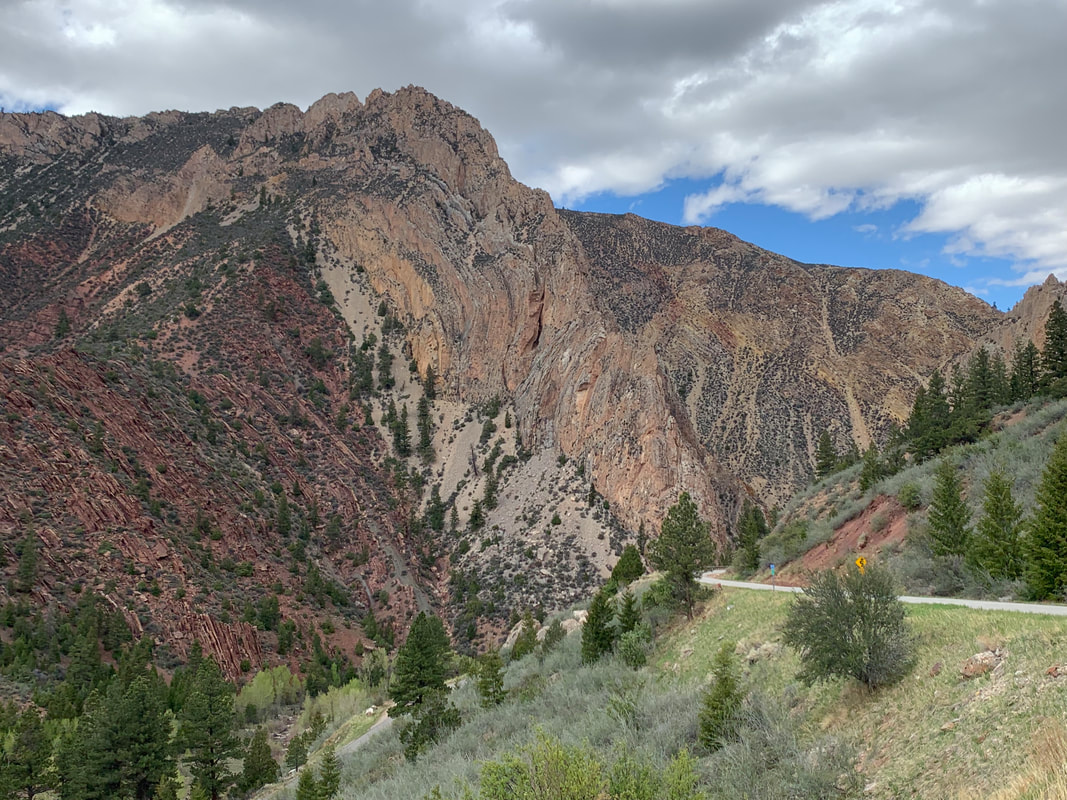 Palisades in Sheep Creek Canyon Geological Area. Precambrian Hades Pass Formation are the red rocks on left, Mississippian Madison Formation are the tan colored rocks in the middle, and the Pennsylvanian-Permian Weber Sandstone are the rocks on the far high ridge on right (see Palisades in geologic cross section below). The contact between the Hades Pass and Madison in the canyon is mapped as a high-angle thrust fault that is upthrown to the southwest (up on left). In un-faulted areas of the Uinta Mountains, this contact is an angular unconformity (erosion surface) and represents about a 400 million year time gap.
Image by Mark Fisher 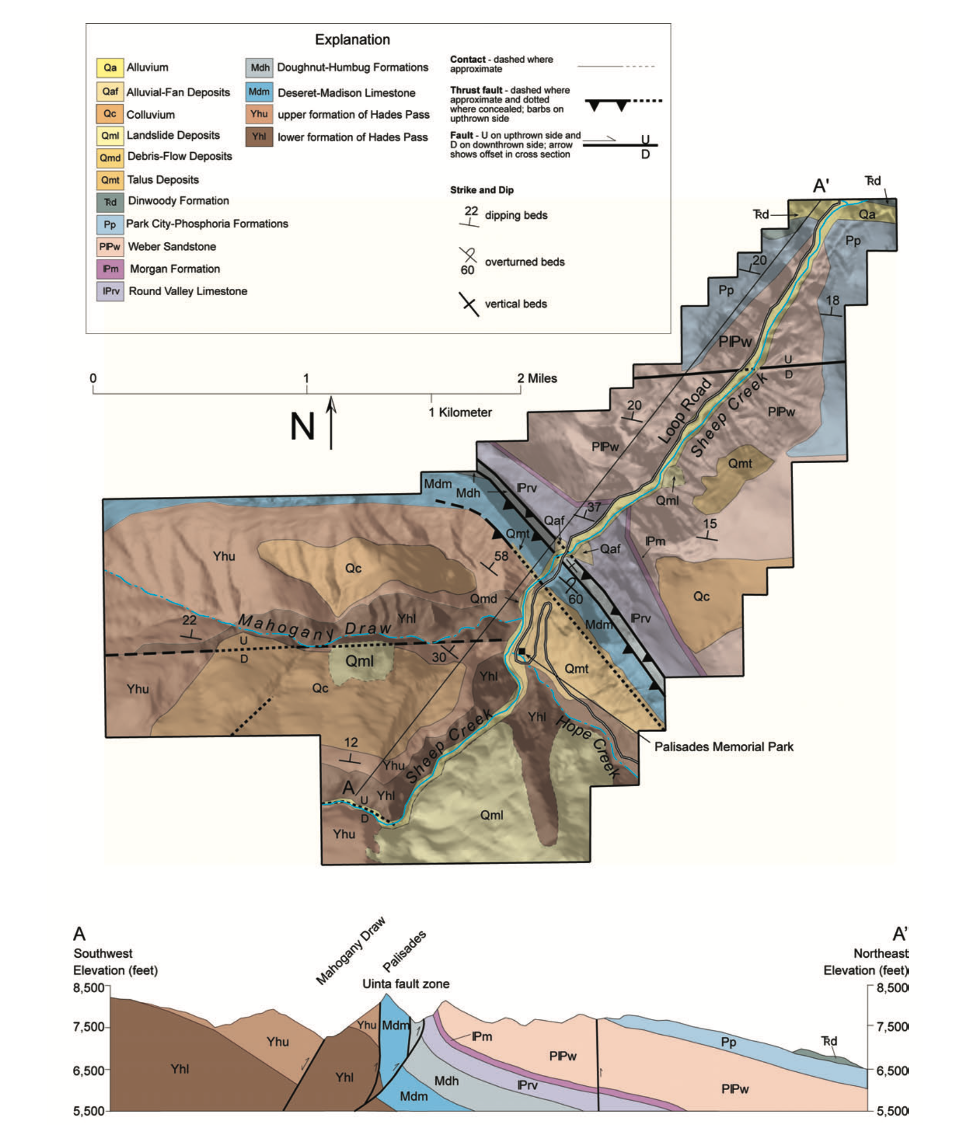 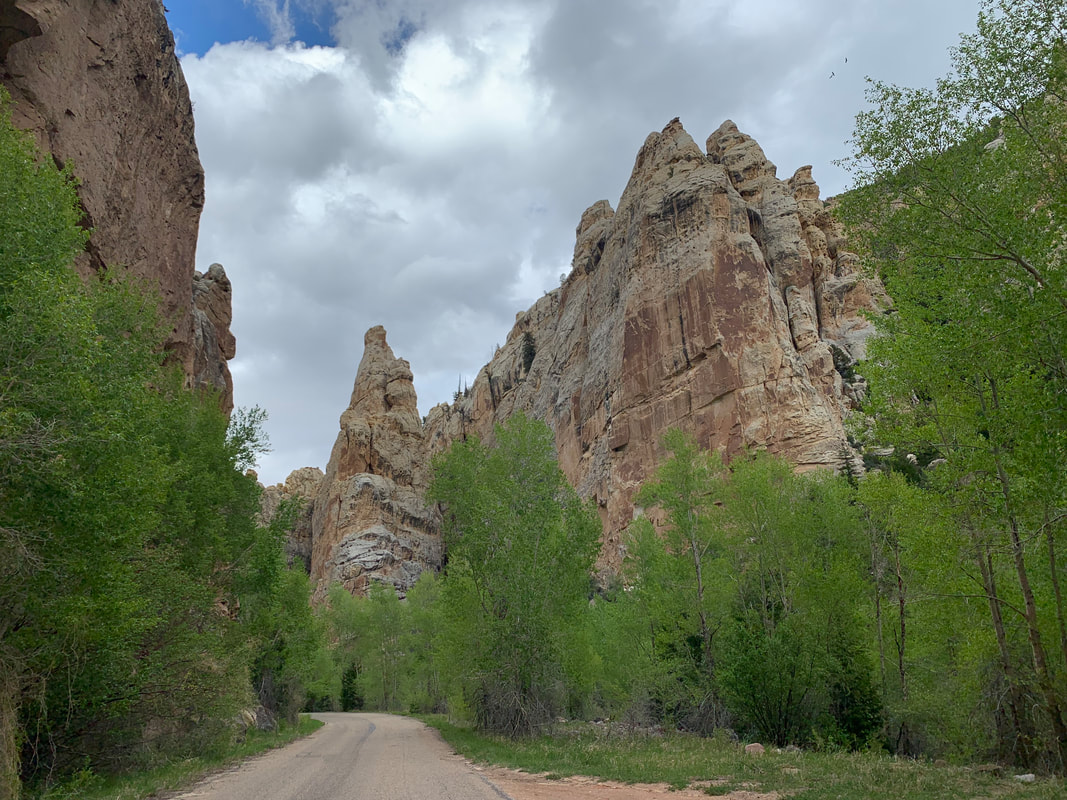 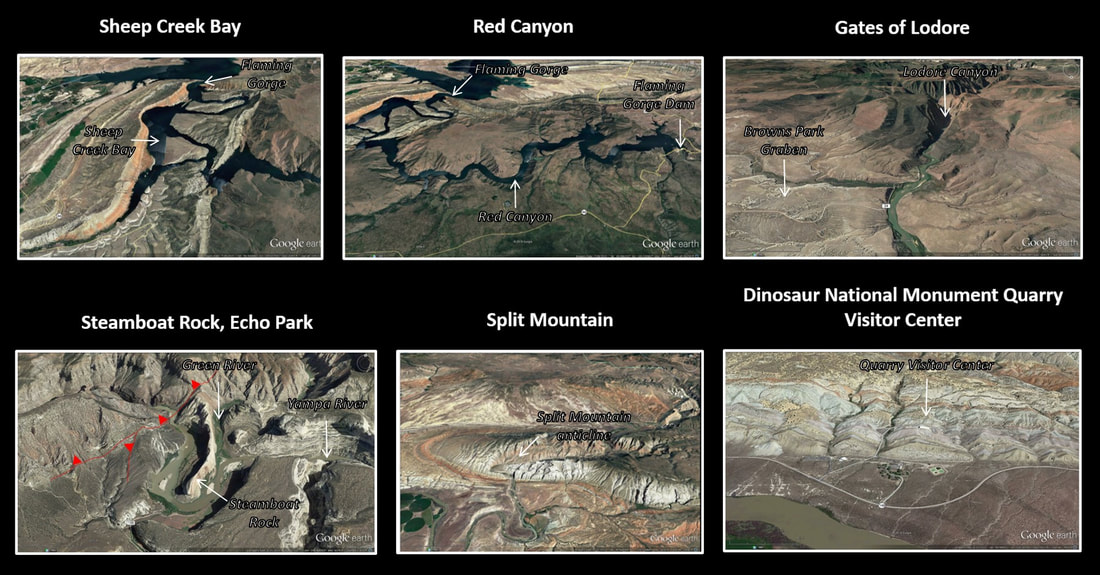