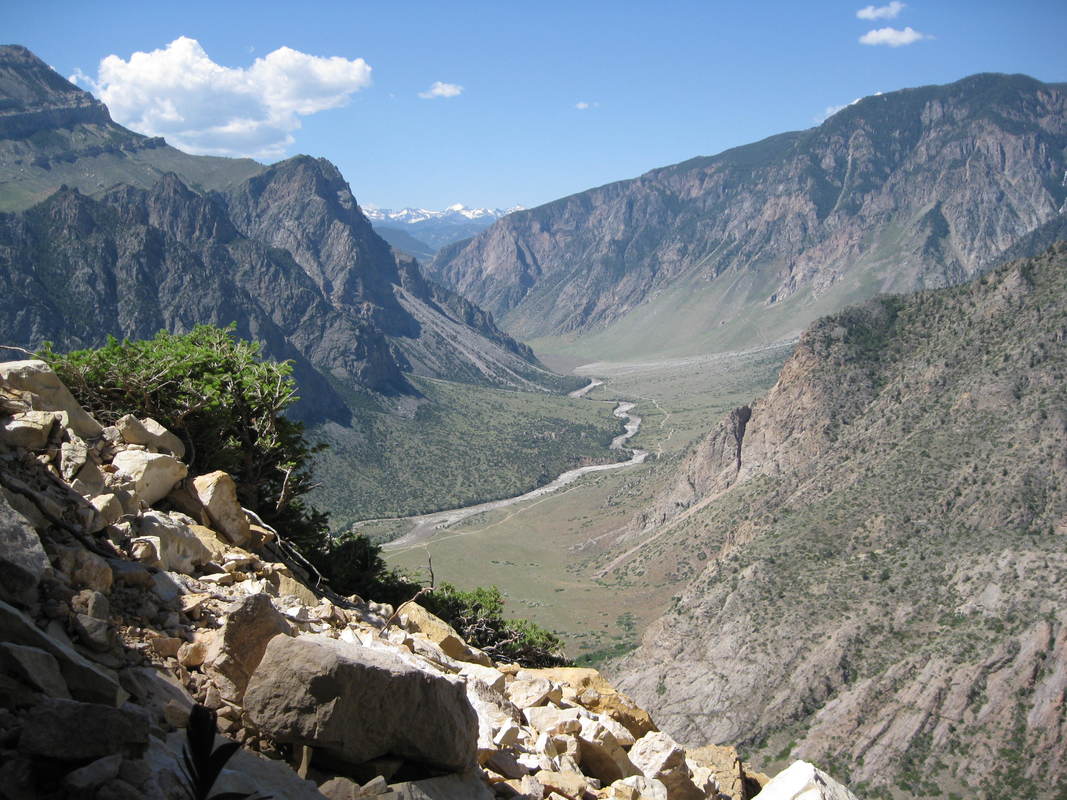 ​Massive mountain-front fold, basin sediments that were shed off of the rising mountains, moraines from glaciation, Precambrian igneous exposures, remote spectacular canyon, Clark’s Fork River with wild & scenic designation, history with escape route of Native Americans eluding the US Cavalry and a hike to a hidden waterfall.  This is heaven for a geologist! It does not get any better.  Even if you are not into geology, this spot is a good reason to visit Wyoming. ​

Clarks Fork Canyon is located forty miles north of Cody. This canyon is at the intersection of the Laramide age (70-55 million years) Cody Arch and Beartooth Uplift, and the Eocene Absaroka Volcanic Province (53-43 million years). It provides one of the most spectacular views in Wyoming. 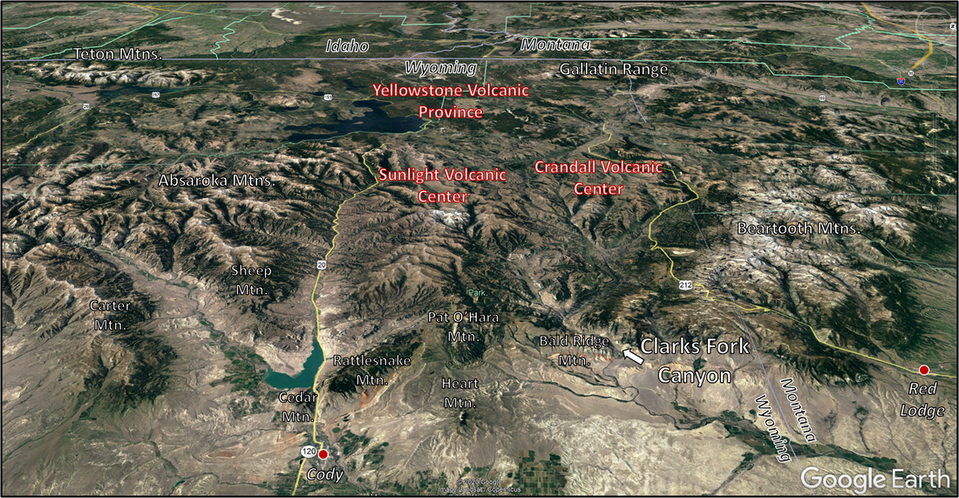 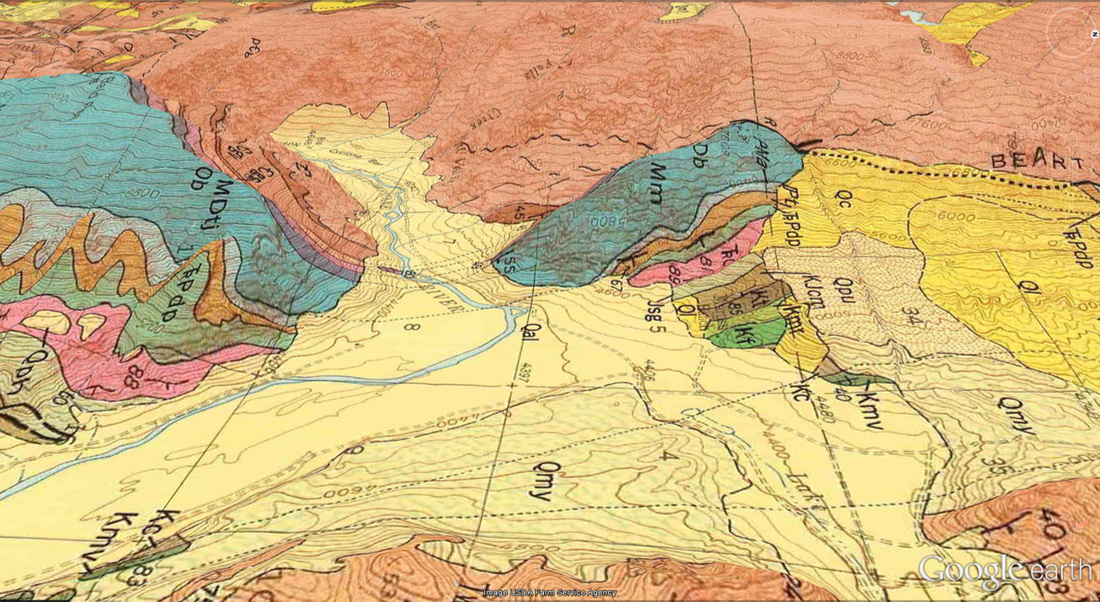 Clarks Fork fan on north side of road. Black dashed line highlights a change in dip in the fan that indicates a period of mountain uplift.  Image from: After Hart, A.S., 2012, M.S. Thesis, Western Washington University, Fig. 4.1a, p. 95 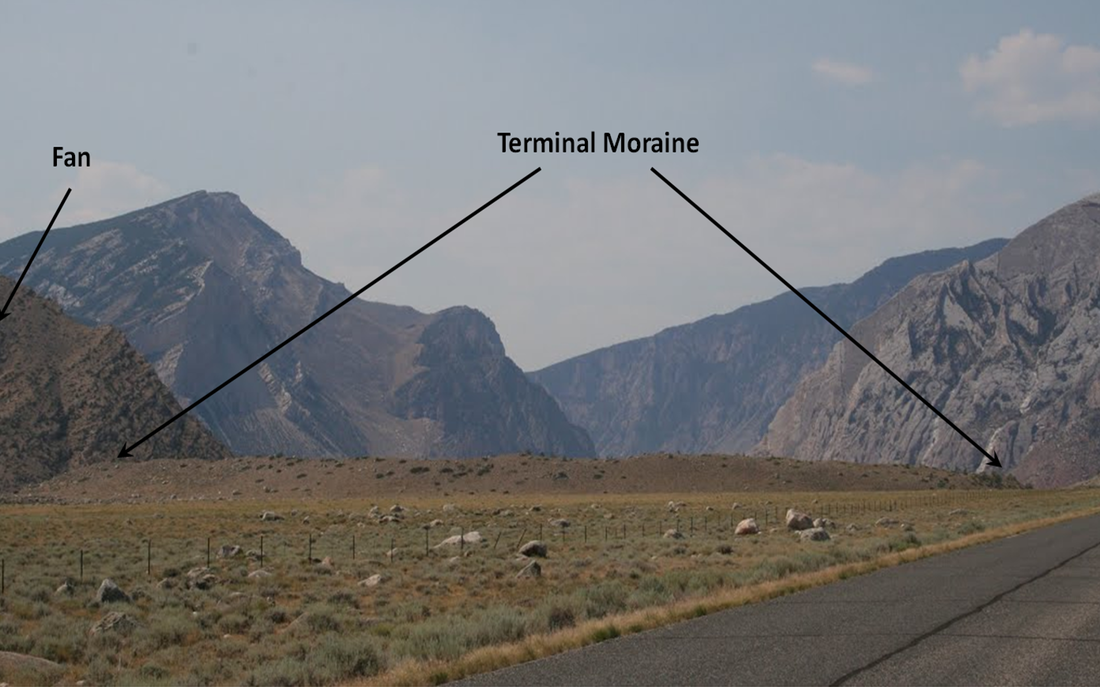 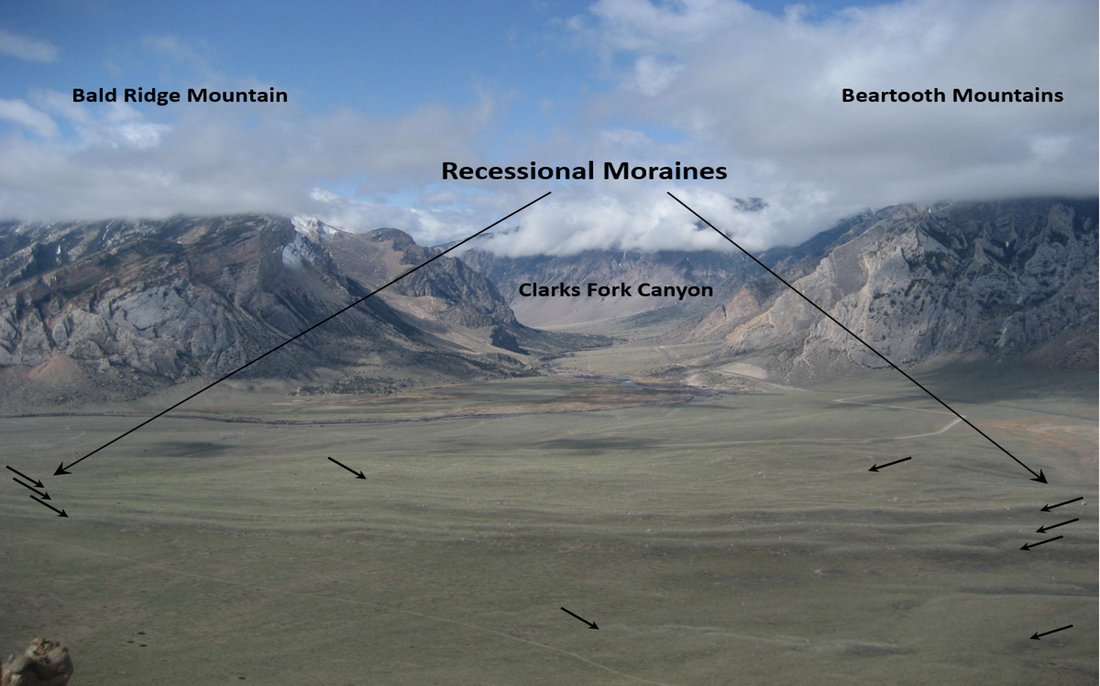 Clarks Fork glacier recessional moraines on valley floor. Note u-shape of glacially modified canyon.
After Tim Schoessler (musicman82) http://images.summitpost.org/original/511096.jpg
The north side of the Clarks Fork road has the Mesozoic and Paleozoic rocks tilted steeply to overturned due to upward movement of the faulted basement.

Structural cross section of Bald Ridge anticline​.  Brown, W.G, 1993, Structural style of Laramide basement-cored uplifts and associated folds, in Snoke et al., Editors, Geology of Wyoming, Geological Survey of Wyoming Memoir No. 5, Fig. 30B, p. 351 (Modified from Blackstone, 1983).
​The superposed (cut down from a higher former land surface) Clarks Fork River carved this canyon with a final assist from Pleistocene glacial ice (U-shaped profile). Canyon walls rise vertically 1,200 feet above the river. The headwaters of the river is at the junction of Fisher and Lady of the Lake Creeks about one mile north of Colter Pass. Congress designated a 20.5 mile stretch of the river as “wild and scenic” in 1990 due to the spectacular geologic features and pristine landforms, recreational use and historical importance. 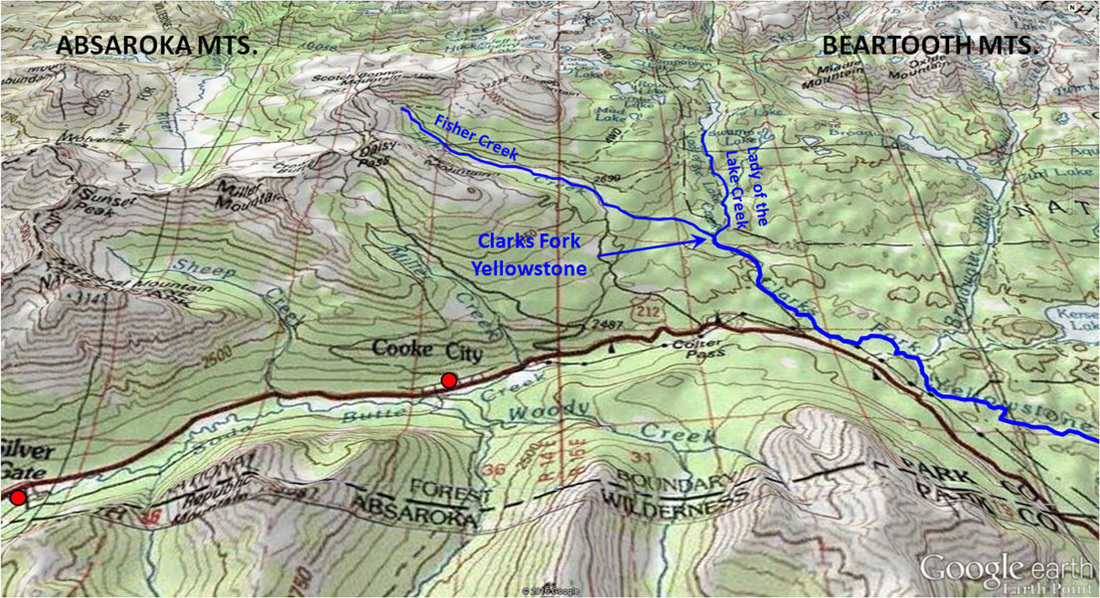 North view of topographic map of the Clarks Fork of the Yellowstone River headwaters located about 2.5 miles northeast of Cooke City, MT.  Base: Google Earth, Overlay: Earth Point Topo Map
Native Americans passed through this area in buffalo hunting parties along the well-known Bannock or “Great Trail.” This 200 miles long passageway through the Rocky Mountains began in the tristate area of Idaho-Washington-Oregon (Camas Meadows, near Grangeville, ID) and passed through Yellowstone National Park to the Clarks Fork Canyon area via Dead Indian Hill and Bald Ridge anticline (aka: Bald Mountain anticline). 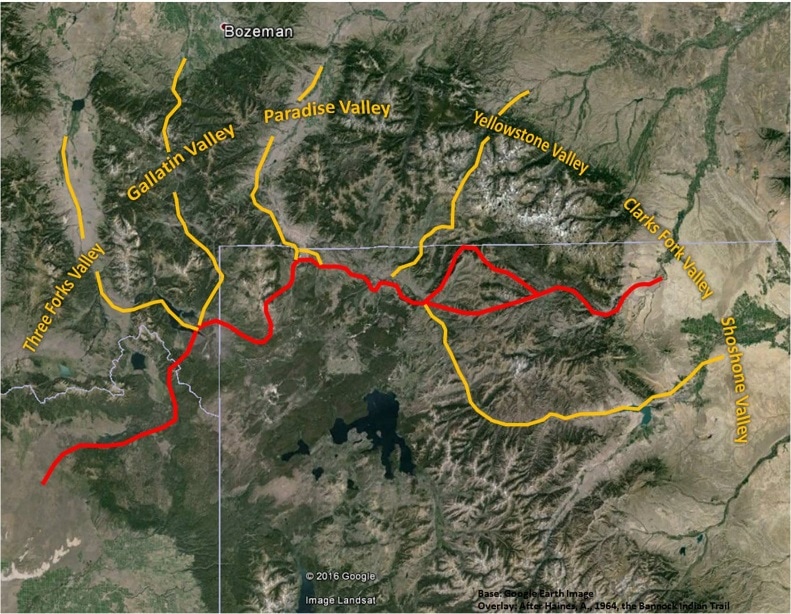 The Bannock Indian Trail (red line), connecting trails (yellow lines) and the hunting areas accessible from it.  Base: Google Earth, Overlay: Modified from Haines, A., 1964, The Bannock Indian Trail
​The trail was used by the non-treaty Nez Perce in 1877, in their quest to find a tranquil sanctuary and avoid capture by the US Cavalry. The same escape route was used again in 1878 by a group of Bannock and Piute Indians on a similar quest. Colonel Nelson Miles, who had captured the defeated Nez Perce the previous year, led the cavalry against the Bannocks. Having spied the warriors on Bald Ridge, he followed them to their encampment on an island at the intersection of the Clarks Fork River and Little Sand Coulee. Remaining concealed through the night behind Bennett Buttes, the cavalry attacked at dawn on September 4, 1878. By 6 AM the battle was over. 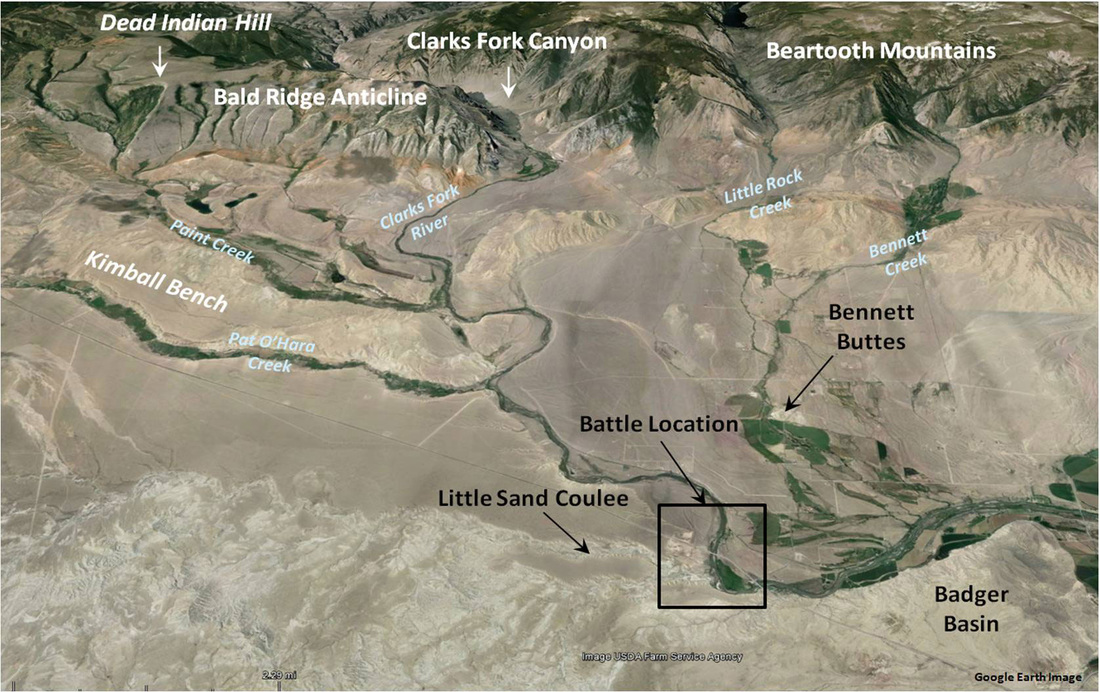 Location of the Bennett Buttes Battle of 1878.  Base: Google Earth; Overlay Data: Modified from Walpole, K.V., 1999, ‘Bivouac of the Dead’: The Battle of Bennett Butte, Mile’s Fight on the Clark’s Fork Reexamined Annals of Wyoming, Winter 1999, Vol. 71, No.1, pp. 17-40.
​Captain Andrew Bennett, Two Crow (army scout) and Little Rock, (guide and interpreter) were killed during the two hour battle. Little Rock and Bennett had streams to the north of the Clarks Fork named after them. Bennett was buried in Wisconson while the two Indians were buried on the top of buttes near the battlefield.
​There are no memorials for the Bannock casualties, they were left where they fell. The name “Dead Indian” is applied to a creek, hill, pass, peak and summit in this area, a clear sign that it was not a safe place for Native Americans. One version of the name origin arises during the aftermath of the Bennett Buttes battle. Two Crow scouts found a dying warrior climbing a ridge to the southeast of the battlefield who they promptly dispatched and scalped. The warrior had been trying to escape over a hill at the south end of Bald Ridge anticline that now bears the name Dead Indian Hill.  The Bannocks were the last free Indians to travel this ancient trail.  Buffalo Bill summarized his view of the Indian wars noting, "Every Indian outbreak that I have ever known has resulted from broken promises and broken treaties by the government."  The spectacular landscape of Clarks Fork Canyon and its trail are their lasting tribute.

Starting at the intersection of US 14-16-20 (Sheridan Ave) and US 14A (16th St) in downtown Cody, head northeast toward Powell on US 14A, 0.4 miles turn left on WY 120 which is the road north toward Belfry, 0.8 miles bridge over Shoshone, 10.0 miles high elevation point on road known as Skull Pass, Heart Mountain is on your right (Heart Mountain page), vista of Dead Indian Hill, Bald Ridge and Beartooths opens up ahead, 16.8 miles junction WY 296 (road to Dead Indian Hill), 29.1 miles bridge over Clark’s Fork River, 29.6 miles turn left on Park County 1AB to Clark (opposite Edelweiss bar/store), 32.4 miles Bennett Buttes Eocene Willwood basin fill with scattered glacial boulders, 33.1 miles turn left on 8VC Canyon Road, 35.8 miles glacial boulders, 37.3 miles pull off on left with glacial terminal moraine (see picture above), on right are conglomerates and sandstones in the Clarks Fork Fan (see picture above).  The fan contains pebbles recognizable as Madison and Big Horn carbonates that were eroded from the rising mountains, 39.3 miles Peak Spring Water bottling plant (private), 39.7 miles red fins on right are Triassic Chugwater Formation with a few erratic glacial boulders stuck in the fins, 40.2 miles pull off on left with views across the canyon of Madison and Big Horn in massive fold off the front of the mountains, to right of road are cliffs of nearly vertical dipping Madison and Big Horn, 40.8 miles drainage valley on right is the contact between Precambrian and Cambrian, on right side of drainage are Cambrian shales and on left side of drainage are Precambrian granites, 40.8 miles view across canyon of dark grey outcrops of Precambrian granites, above it are covered slopes of Cambrian shale, cliffs at top are Big Horn and Madison carbonates, 41.1 miles end of pavement and recommended place to park and start hike.

​Walk along the dirt road that heads toward the river and up the canyon.  If you have a high clearance 4WD and don’t mind a very rough road, you can drive the first 0.6 miles to the Forest Service boundary.  The road beyond the Forest Service boundary is even rougher and we park just before the boundary. Seriously, you can walk faster than driving parts of that road. Walk the road past the Forest Service boundary by about 0.8 miles at which you turn right up a trail that runs adjacent to a creek (no signage). This creek is mostly hidden, but has a few Cottonwood trees where it exits the canyon wall.  Once you are in the small side canyon and can see the falls, the trail up to the falls is a scramble that crosses the creek several times and requires hugging the wall at times. Use your own judgment on whether this scramble is safe.  The distance to the waterfall once you leave the dirt road is about 0.6 miles.  Total four miles roundtrip hike that takes about 2-1/2 to 3 hours.  Vertical climb is about 600 feet.  This hike is enjoyable in all seasons.  The waterfall and parts of the creek are frozen in the winter. I have on a couple of occasions come across a rattlesnake on the trail in the summer. 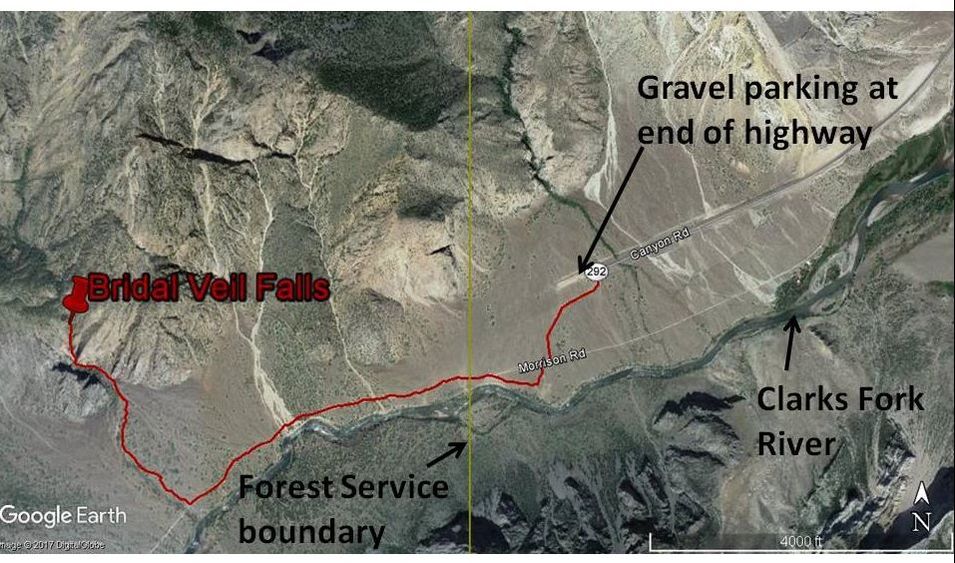