The Cheyenne Tablelands are a remnant of a thick sedimentary wedge deposited during the Oligocene and Miocene, that buried the Laramie Range and thinned eastward onto the Great Plains of western Nebraska. The Gangplank, a narrow strip of this surface persists today and provided the 19th- 20th centuries transcontinental railroads and highways a gentle route over the mountains. Prior travel was by wagon, animal, or foot. What the discovery of South Pass did for western expansion, “The Gangplank” did for engine driven travel and development of the future Wyoming. 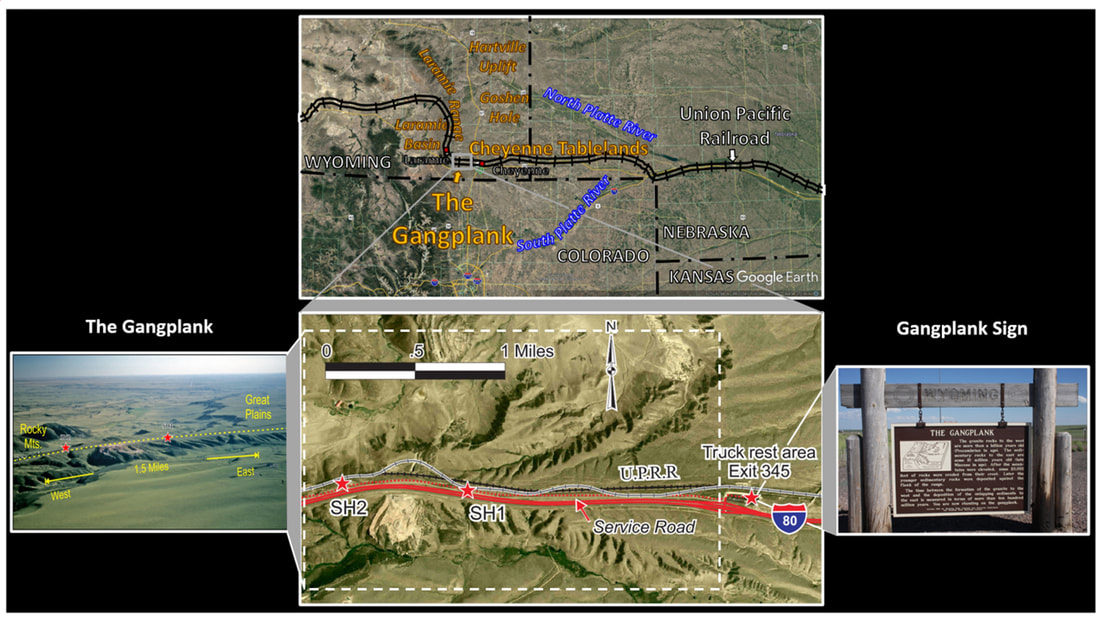 Top: Areial view of the Cheyenne Tablelands area, southeast Wyoming, and western Nebraska. Bottom center: Close up aerial photo map of the Gangplank and vicinity.  Stop SH1 – Remnant man-made fill and cut. Until 2005, the Gangplank sign, now at the truck stop, was located here at an I-80 pull over.  This location gives the visitor a fine view of the valleys to the north and south which define the edges of the Gangplank. To the north of the railroad are a fill and cut which were part of the original U.P. route on the Gangplank. The modern right of way (black line) dates from the early 1900s and avoids slight bends in the original alignment (white line), permitting higher train speeds. However, the modern line only reduces the twenty miles distance between Cheyenne and Buford by 600 feet. Stop SH2 – Gangplank view and quarry for railroad trackbed ballast. This is the tip of the arrowhead-shaped Gangplank and provides another fine view.  Here you can put one foot on the stratified rocks of the Great Plains and the other on the granite of the Rocky Mountains. The large quarry to the west is operated by Martin Marietta Materials and provides granite ballast for the Union Pacific and Burlington Northern Santa Fe railroads. Left: Areial view of SH1 & SH2 (red stars). Right: Historical marker at east end of rest stop.
Image: Top: Google Earth; Bottom & Left: https://www.visitlaramie.org/things-to-do/self-guided-tours/railroads-of-albany-county/; Right: https://s3.amazonaws.com/gs-waymarking-images/9dff757f-420e-4852-9187-509a74972dc3.jpg. 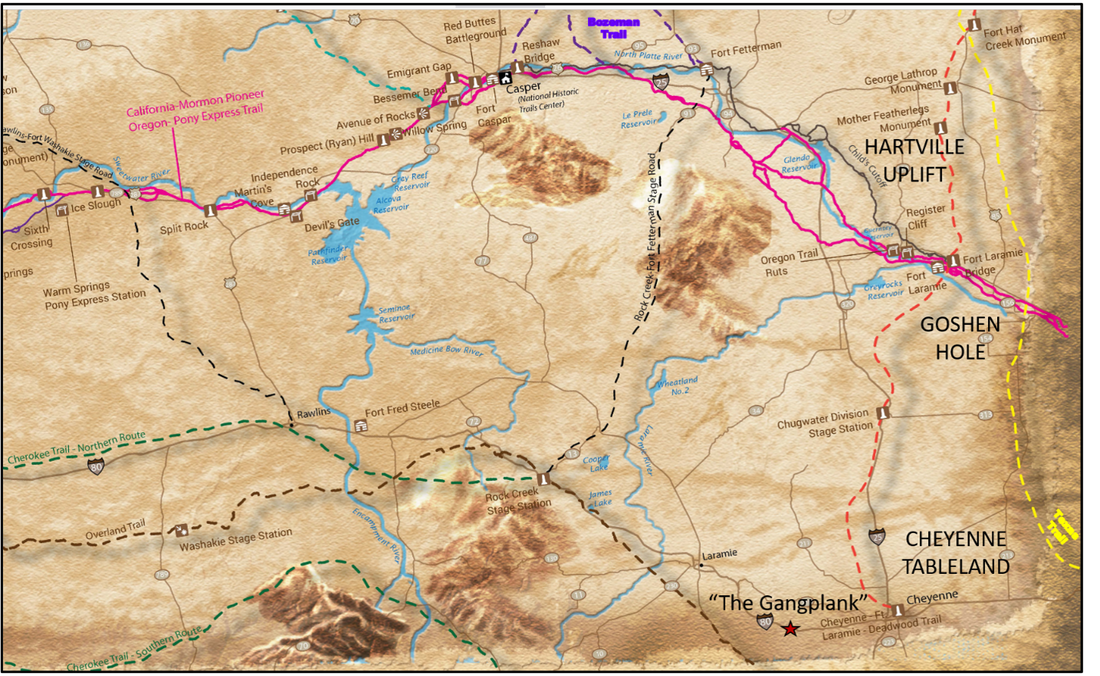 Historic trails of southeast Wyoming. Freight and stage trails remained in use until 1887. Cattle drives continued on the Texas trail (yellow dash) through 1897.
Image: After BLM, https://www.blm.gov/documents/wyoming/public-room/map/wyoming-historic-trails-map.

The Gangplank was discovered by accident in the Laramie Mountains (then called the Black Hills) in September 1865, when Gen. Grenville Dodge and troopers were escaping a hostile Indian party. They had scrambled down a ridge south of Crow Creek escaping to the plains below. General Dodge told his guide "If we can save our scalps, I believe we've found a pass through which the Union Pacific can go."(https://www.pbs.org/wgbh/americanexperience/features/tcrr-dodge/).  This was the route chosen for the transcontinental railroad two years later. The gangplank was used for the transcontinental Lincoln Highway (conceived 1912, dedicated 1913) and four decades later for Interstate 80 (designated 1956, completed 1986).

A transcontinental railroad route connecting eastern rail system with the west coast was first proposed to Congress in 1847. Congress authorized the Secretary of War to survey possible routes for a transcontinental railroad in 1853.  Five major Pacific Railroad routes were explored by the U.S. Army Corps of Topographical Engineers from 1853 to 1855. They produced a 12 volumes record of the geography, geology, and botany of the western half of the continent. (Reports of Explorations and Surveys, to ascertain the most practicable and economical route for a railroad from the Mississippi River to the Pacific Ocean, made under the direction of the Secretary of War, in 1853-4, Volumes I-XII; http://www.cprr.org/Museum/Pacific_RR_Surveys/).

No route was selected at the time but Jefferson Davis, Secretary of War and future President of the Confederacy, summarized his conclusions of the routes in volume I: The entire Federal Budget of 1856 was $69MM. (Gleed, J.S., 2015, The Great Pacific Railroad Survey of 1853-4; http://www.smcgs.org/sites/default/files/files/The%20Great%20Pacific%20Railroad%20Survey%201853-1855.pdf). 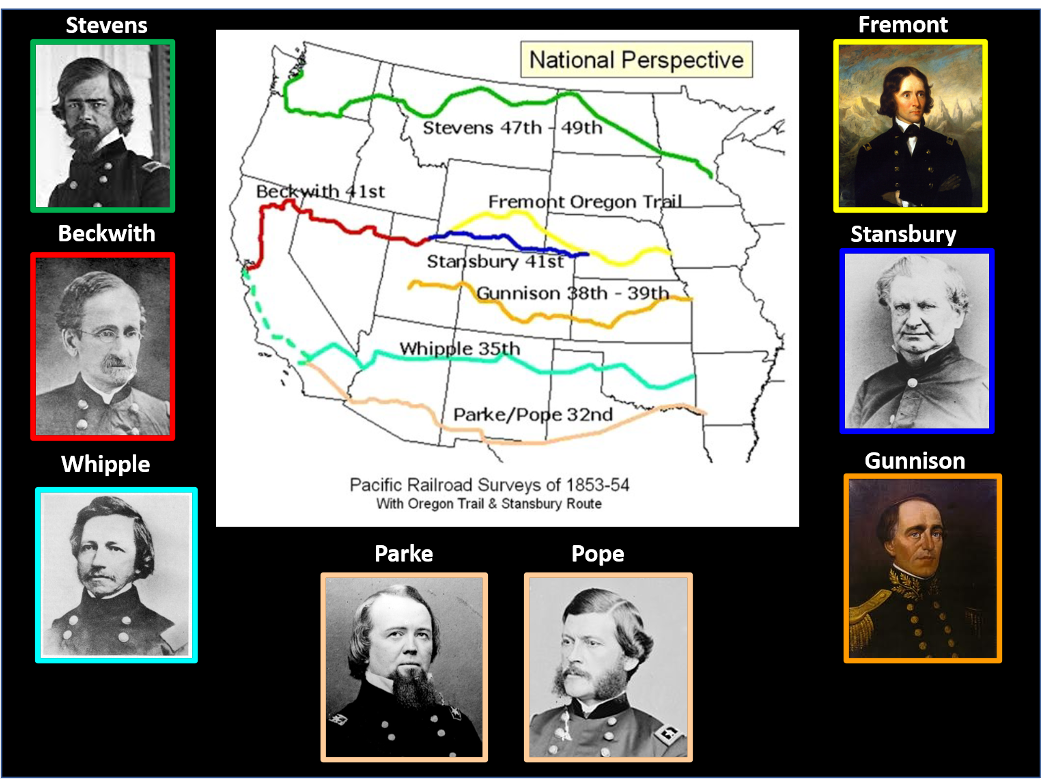 The western railroad surveys completed in the 1850’s by the U. S. Army Corps of Topographical Engineers.
​Image Map: After Nelson, M., 2013, RMFMS: The Gangplank—Wyoming II: Rocky Mountain Federation of Mineralogical Societies Newsletter, Vol. 44, Issue 10, Fig. 2, p. 2;  http://rmfms.org/uploads//newsletters/2013/2013-10-Nov-RMFMS-Newsletter.pdf. Stevens, Beckwith, Whipple, Parke, Pope, Gunnison: https://sites.google.com/a/umn.edu/the-pacific-railroad-surveys-1853---1854/home; Stansbury: https://www.geographicus.com/P/ctgy&Category_Code=stansbury; Fremont: https://en.wikipedia.org/wiki/John_C._Fr%C3%A9mont#/media/File:John_C._Fr%C3%A9mont.jpg.
Abraham Lincoln had a chance meeting with Dodge in Council Bluffs in August 1859, where they discussed the best route for the transcontinental railroad. On July 1, 1862, President Lincoln signed the Pacific Railroad Act. The President summoned Dodge to Washington D.C. in 1863 to discuss the route and starting location for the railroad. Lincoln issued an executive order on November 17, 1863 (two days before the Gettysburg Address) setting Council Bluffs as the railroad's eastern terminus where Gen. Dodge had advised. Dodge resigned from the military in May 1866 to become chief engineer for the Union Pacific railroad. 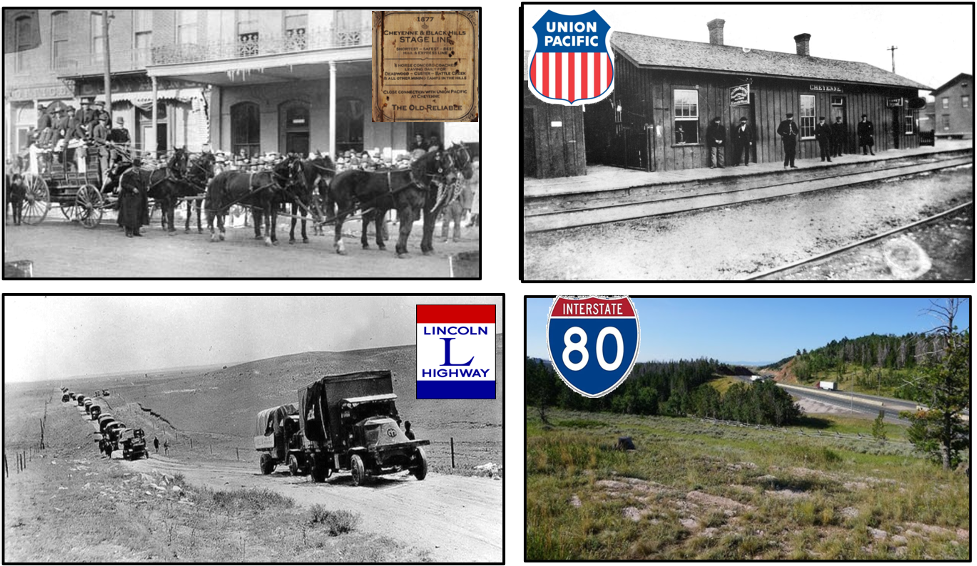 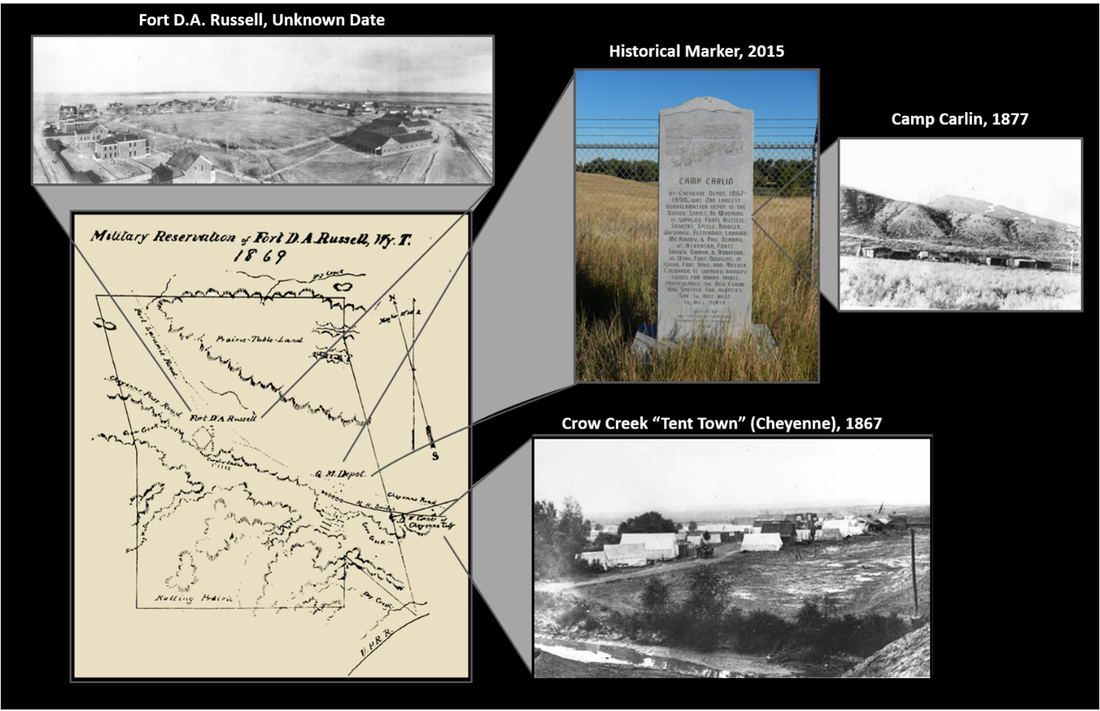 Cheyenne is located on the high plains of southeast Wyoming. The town, as well as the Wyoming territory, owe their existence to the Union Pacific Railroad. Gov. John Campbell’s address to the first Territorial Legislature noted “For the first time in history of our country the organization of a Territorial government was rendered necessary by the building of a railroad. Heretofore the railroad has been the follower instead of the pioneer of civilization.” (http://spcrphotocollection.wyo.gov/luna/servlet/media/book/showBook/wyo~1~1~11~149322).
The route of the first transcontinental railroad through southern Wyoming is due to the region’s geography and geology. 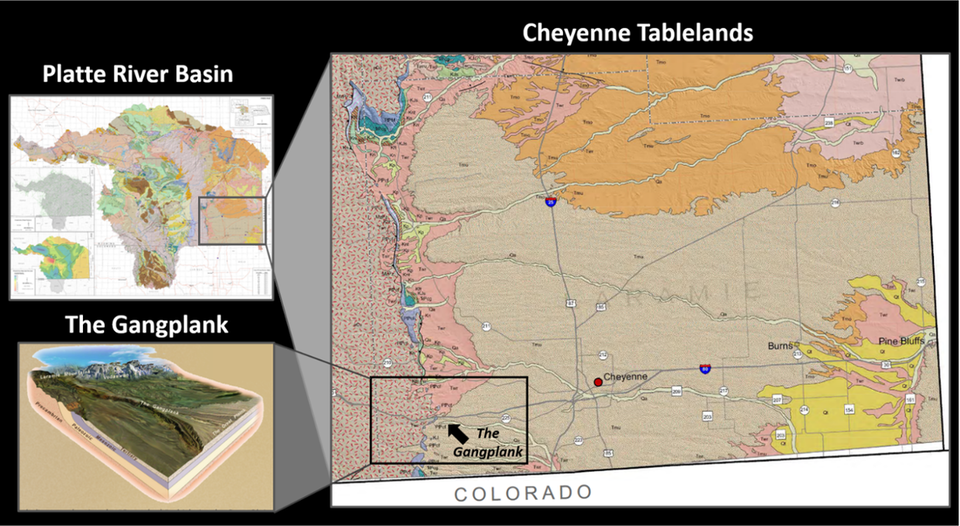 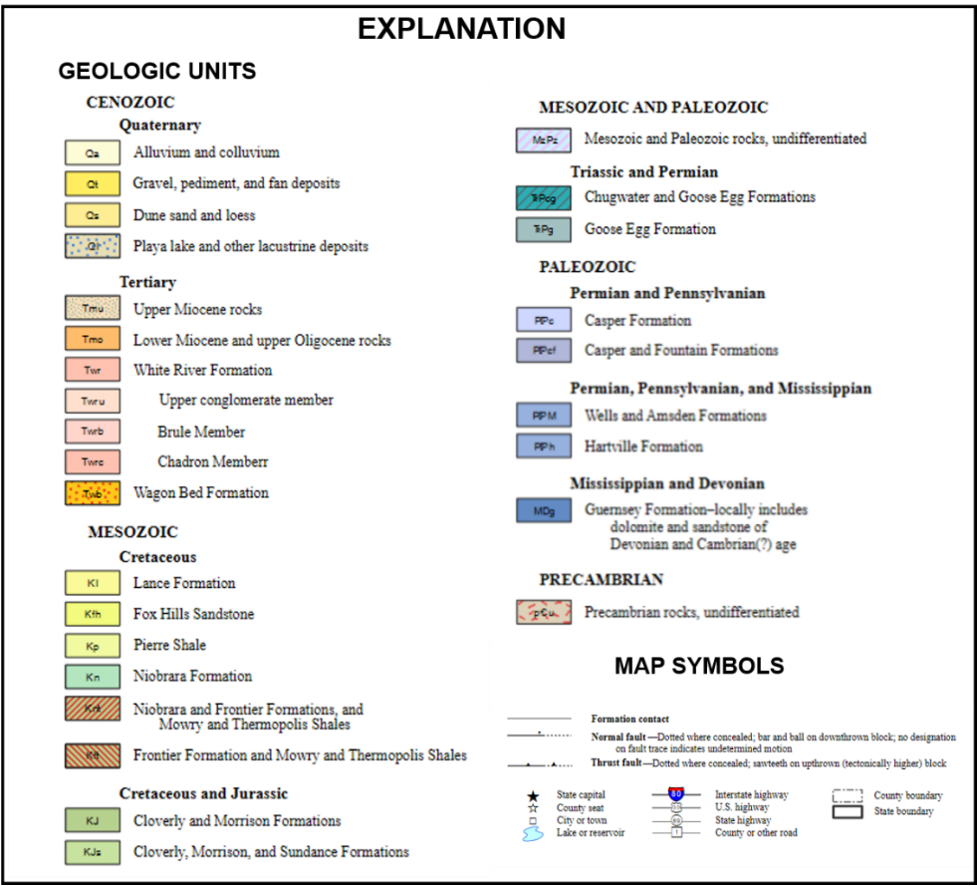 Explanation of geologic map units and symbols.
​Image: Explanation: After https://www.wsgs.wyo.gov/docs/wsgs-web-denver-basin-geologic-map.pdf
The Cheyenne Tablelands are the erosional remains of a Tertiary fluvial and volcanic sediments from basin fill in the northern Denver Basin. The sediments draped over crystalline basement rock of the Laramie Range and the folded Phanerozoic formations of the Denver Basin, extending onto the Great Plains of Nebraska. The Gangplank provided a topographic bridge that allowed the most favorable path over the Rocky Mountains. The Precambrian granitic rocks of the Sherman Summit are an area of low relief at about 8,000 feet elevation (ASL).

Tablelands are residual landforms typical for flat, layered rock sequences, formed due to dissection and cliff retreat. The cemented cap rocks are more resistant to erosion. All earth’s landscapes are ephemeral given the scale of geologic time. 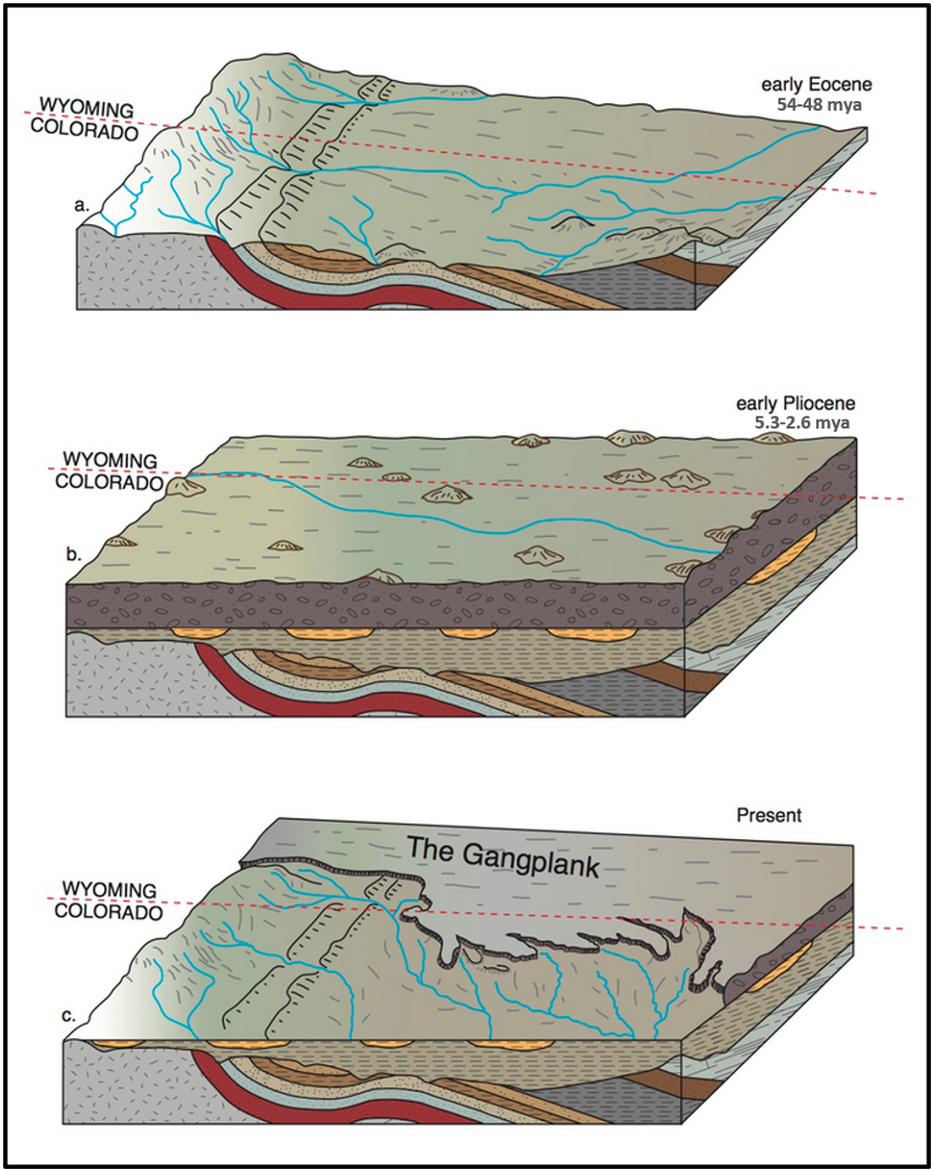 Block diagrams of development of the Gangplank. The post Laramide tectonics of early Eocene (top) was followed by erosion and burial of the mountains & deformed sedimentary strata in their own debris in early Pliocene through Oligocene (middle). The exhumation of the Rockies that began in the late Miocene continues today (bottom).
​Image: After Cook, T. 2013; http://www.down2earthscience.com/wp-content/uploads/2013/03/Gangplank.jpg.
The surface rocks of the tablelands consist of nearly flat lying Cenozoic strata. The sediments are the debris of the Laramie Range transported by eastward flowing streams and volcanic ash from the Yampa and Elkhead Mountains volcanic fields of northwest Colorado. Stream terraces record the surface level at different stages of late Miocene (11.6-5.3) to Present exhumation. ​ 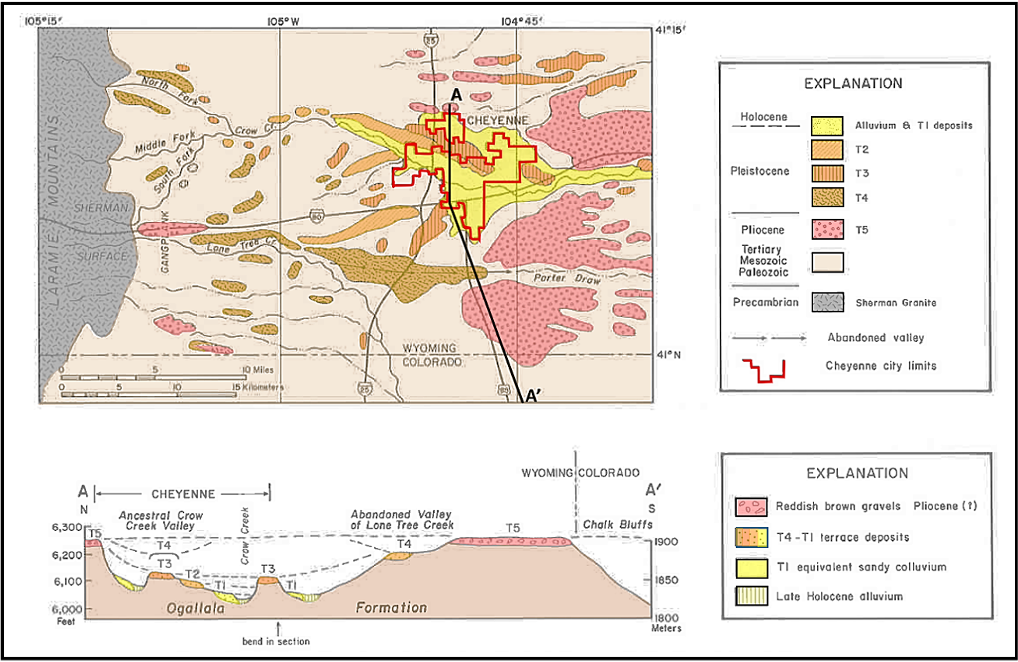 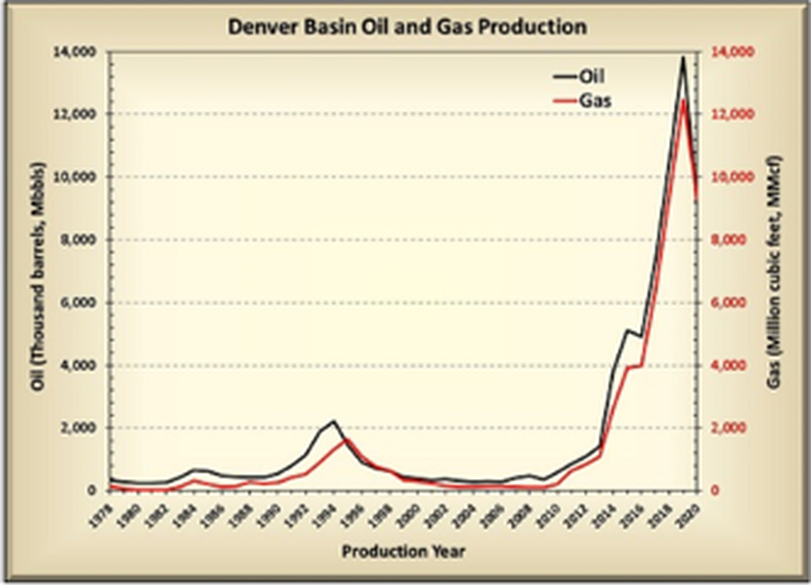 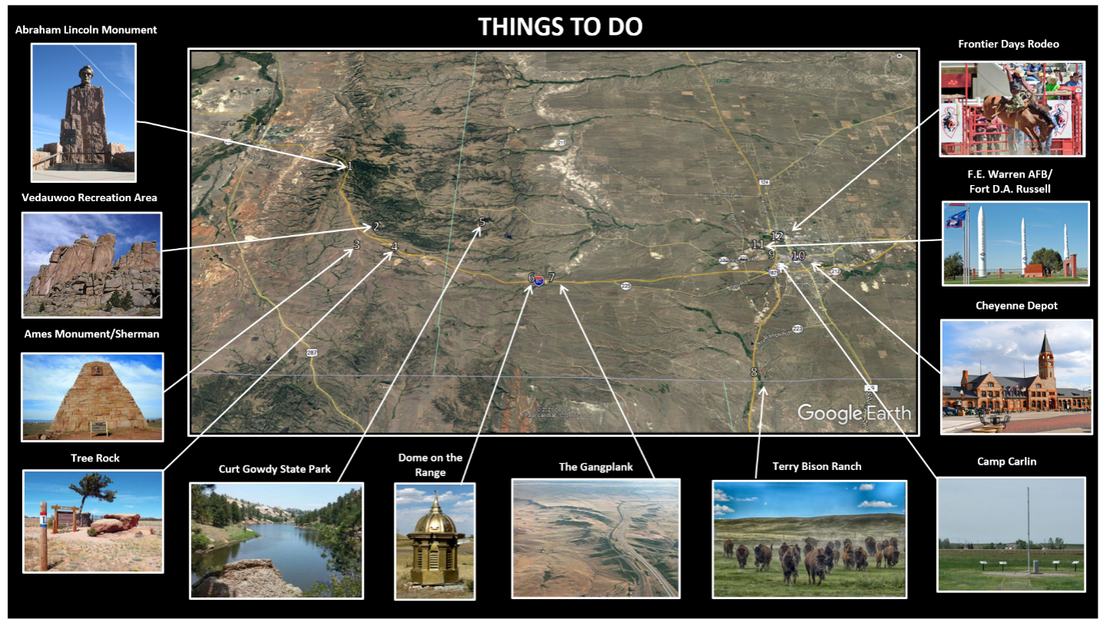