Spectacular geology with granite boulders and knobs to explore and climb.  High on scenery with pine and aspen trees surrounding the granite hills.
Vedauwoo (vee-da-voo)is an area of granite outcrops at 8,200-foot elevation towering above the generally flat terrane on top of the Laramie Range.  Geologists called such features monadnocks or tors.  Vedauwoo is in the Laramie Range between Cheyenne and Laramie on the north side of I-80. The name comes from the Arapaho word “biot o’wu” which means “earth-born.” The rock outcrops are 1.43 billion-year-old Middle Proterozoic Sherman Granite that formed within earth’s crust as a batholith (very large intrusive body of igneous rock that extends deep into the crust). They were elevated by the Laramide Orogeny (70-55 million years ago). Differential weathering by ice, water, and wind on the rocks and within east-northeast trending fractures and joints has created the landscape seen today. Biotite minerals weathered to swelling clays contributed to expansion that helped break-down the near surface rock. The disintegration of the granites led to the gentle rolling topography with a few areas of granite outcrops. The angular, coarse grain fragments of granite are called “grus.” Cemented sedimentary rocks of grus are a type of sandstone called arkose. Arkose units are evidence of a former granitic highland source (e.g. Fountain Arkose deposits eroded from the Late Paleozoic Ancestral Rocky Mountains). 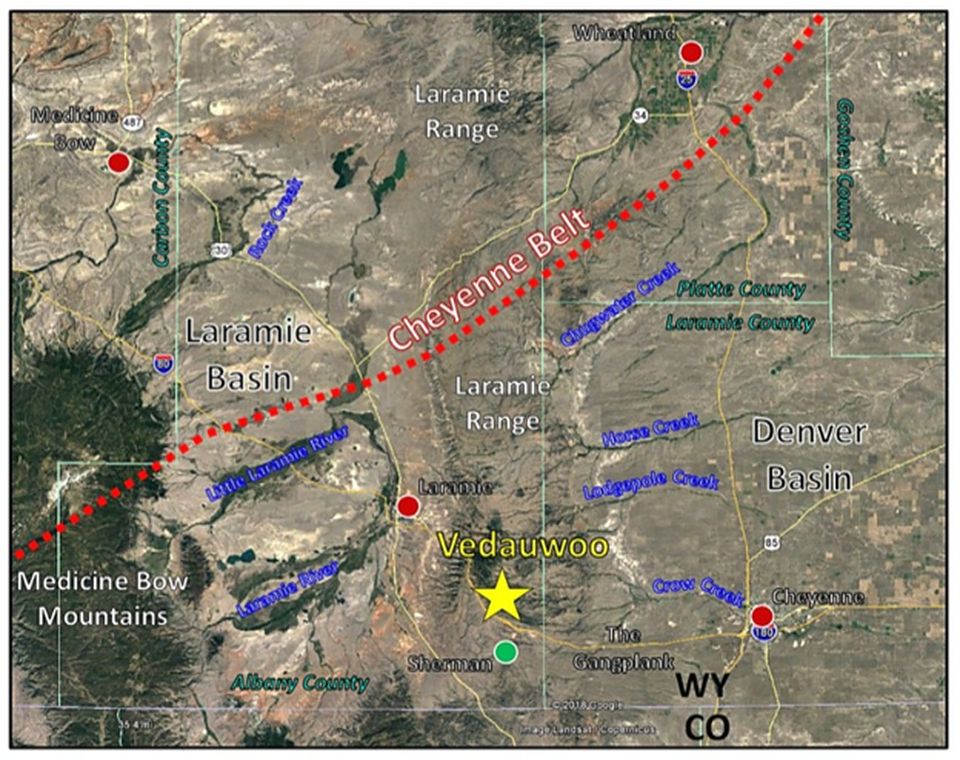 The Vedauwoo area lies south of the Cheyenne Belt. The rock unit was formally named by geologist Nelson Horatio Darton (1910) after the town of Sherman, Wyoming (after civil war general William Tecumseh Sherman). The town of Sherman was a Union Pacific train station at the highest elevation point (8,247’) along the original route of the Transcontinental Railroad over the Laramie Range. Union Pacific Railroad had previously named the place “Lone Tree Pass.” The town is gone with only a few graves in the cemetery remaining, but the Ames Monument now marks the location. 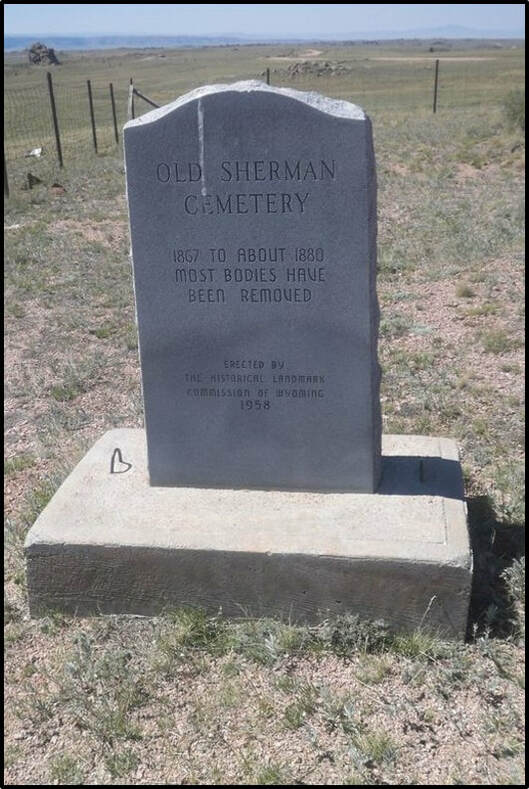 The Sherman Granite is a massive, coarse-grained (porphyritic) igneous unit that cooled slowly beneath the earth’s surface. The coarseness of the rock reflects the amount of time the rock cooled in the magma chamber. Jointing within the rocks is pronounced. The minerals consist primarily of quartz (glassy clear), orthoclase (pink), plagioclase (white), biotite (shiny black) and hornblende (black). 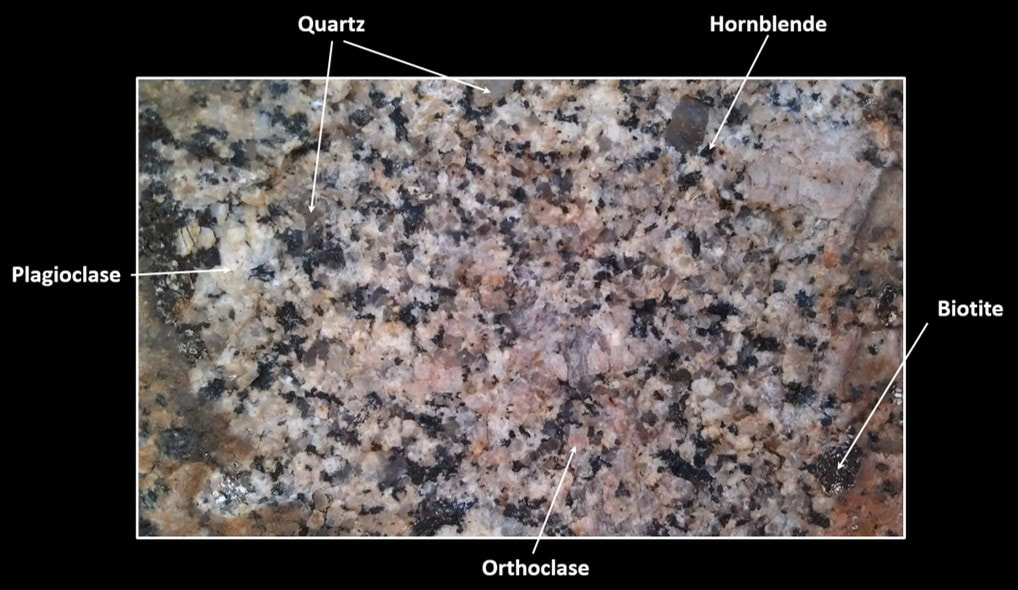 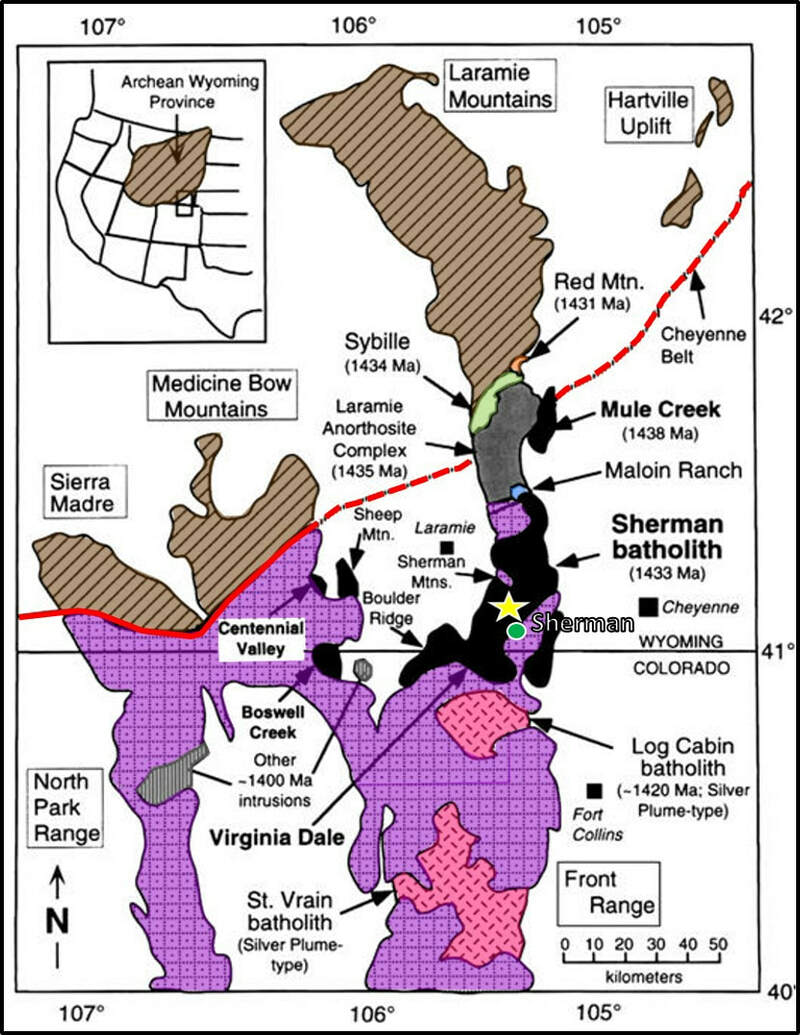 Tectonic and lithologic map of southeast Wyoming and northern Colorado. Mapped extent of the Mesoproterozoic Sherman batholith (black) includes rocks in the Front Range and Medicine Bow Mountains. Included for reference are geographic place names within the batholith referred to by previous workers. Also shown are Mesoproterozoic intrusions to the northwest of the Sherman Batholith (Laramie anorthosite complex in grey, Sybille intrusion in green, Red Mountain pluton in orange, Maloin Ranch intrusion in blue) and south of the Sherman Batholith (Log Cabin and St. Vrain in stippled red). Basement (brown diagonally lined) north of the Cheyenne belt is the Archean Wyoming province; basement (purple squares with dots) south of the Cheyenne belt is Paleoproterozoic Colorado province. Radiometric ages for Mesoproterozoic intrusions are posted on the map in parentheses.Red line displays location of the Cheyenne Belt suture between the Wyoming Craton and the Yavapai Province. Vedauwoo location is shown by yellow star. The ghost town of Sherman is shown by green dot.
Image: After Ben R. Edwards, Carol D. Frost; An overview of the petrology and geochemistry of the Sherman batholith, southeastern Wyoming: Identifying multiple sources of Mesoproterozoic magmatism. Rocky Mountain Geology; 35 (1): Fig.1, p. 35.

Vedauwoo outcrops. Note pronounced east-northeast oriented vertical and horizontal jointing and fractures in the granite in both images. They are responsible for the blocky appearance of the granite.
Image: Left: http://www.wsgs.wyo.gov/public-info/tour-vedauwoo;
​Right: https://www.fs.fed.us/wildflowers/regions/Rocky_Mountain/VedauwooRecAreaPoleMtn/images/Photo1_lg.jpg
The Sherman batholith geochemical rock suite has a mixed magma source from the asthenosphere (50-120-mile depth), along with magma from partial melting of continental crust. The tectonic cause of mantle melting was from either a mantle plume, or continental extension with subduction. Magma intruded into Paleoproterozoic crust of the Yavapai Province.
Vedauwoo is an outstanding place for enjoying the shapes of these Sherman Granite outcrops rising above the erosion surface. Legends say the rocks were piled up by frolicsome spirits and that the crags provided hideouts for outlaws.  But these spectacular granite formations are truly “earth-born.” 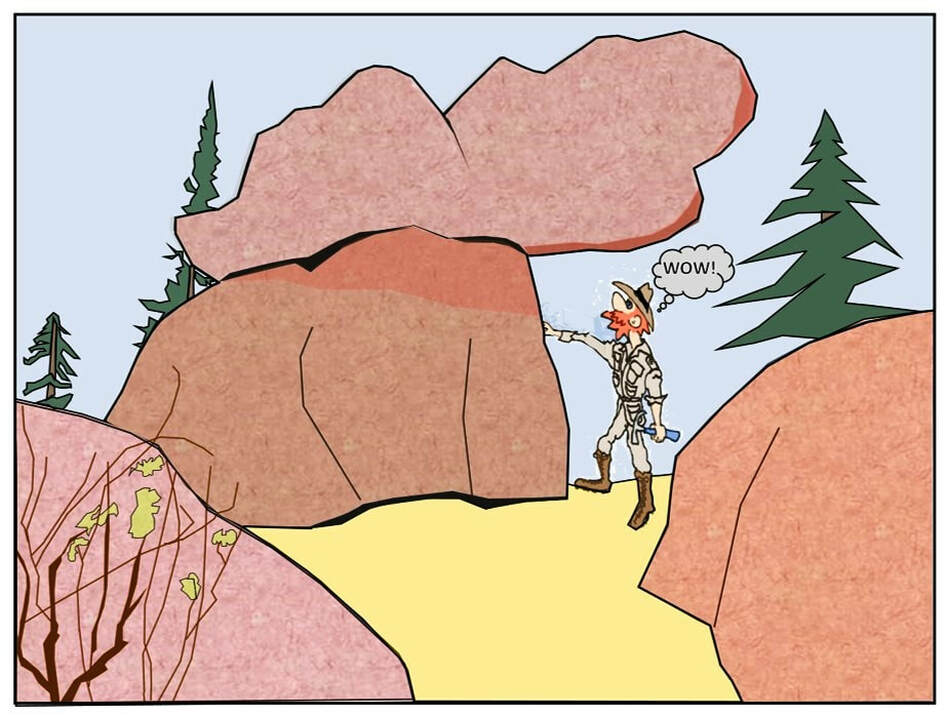 Located on the National Forest, Vedauwoo is a popular spot for residents of Laramie and Cheyenne, especially college students from the University of Wyoming. There are usually a few hikers, mountain bikers, rock climbers, picnickers and campers with less people during the work week. It is high on scenery with pine and aspen trees surrounding the hills of granite. Our recommendation is to take the 2.8 mile Turtle Rock Loop Trail that circles the granite knob. The trail has minimal elevation gain or loss, but it is not flat. You might also consider exploring off-trail and just scrambling over the granite boulders. Elevation is just over 8,000 feet, so the temperature can be cool. Directions: Coming east from Laramie on I-80, drive 12 miles and exit 329 at Vedauwoo Road. Cross left under the interstate and drive on Vedauwoo Road for 1.2 miles to the Forest Service Campground entrance. Turn left into the campground area and drive 0.5 miles to a parking area on the left. There is a fee.

There are a significant number of fun mountain bike trails on the Forest Service just to the north and northwest of Vedauwoo (see MTB Project for details). 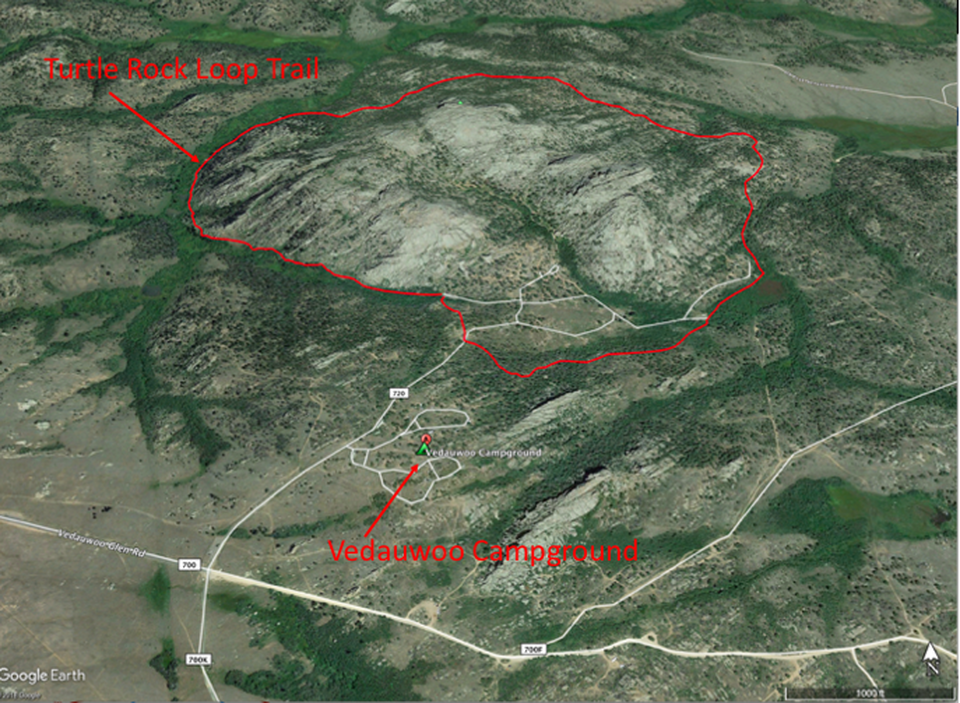