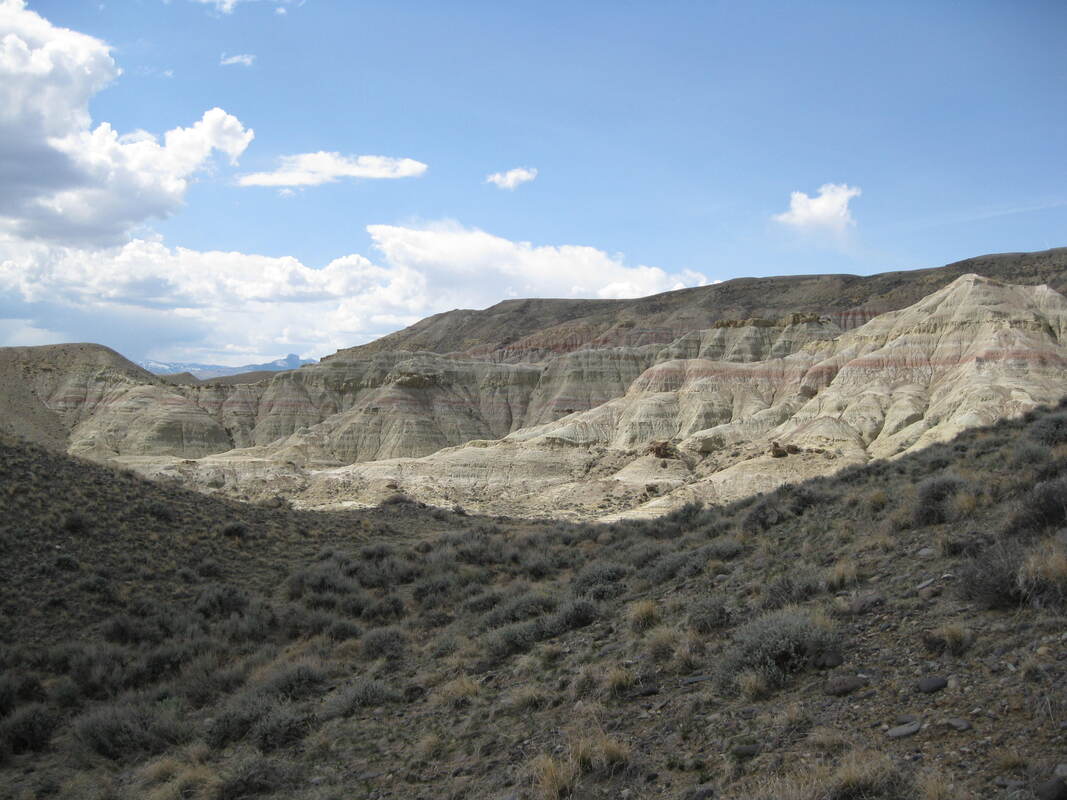 ​Outcrop of flood plain sediments deposited during one of the strongest global climate warming events in geologic history called the Paleocene-Eocene Thermal Maximum (PETM). This bench is capped by a gravel terrace deposited by an ancestral Shoshone River.

Polecat Bench is a prominent feature located north of Powell, Wyoming. The bench is about 20 miles long and two to four miles wide. The feature covers 28,000 acres and rises 600 feet above the Powell Flats. This high terrace surface marks the basin floor over which the Shoshone River flowed in the Early Pleistocene (1.8-0.78 Ma). 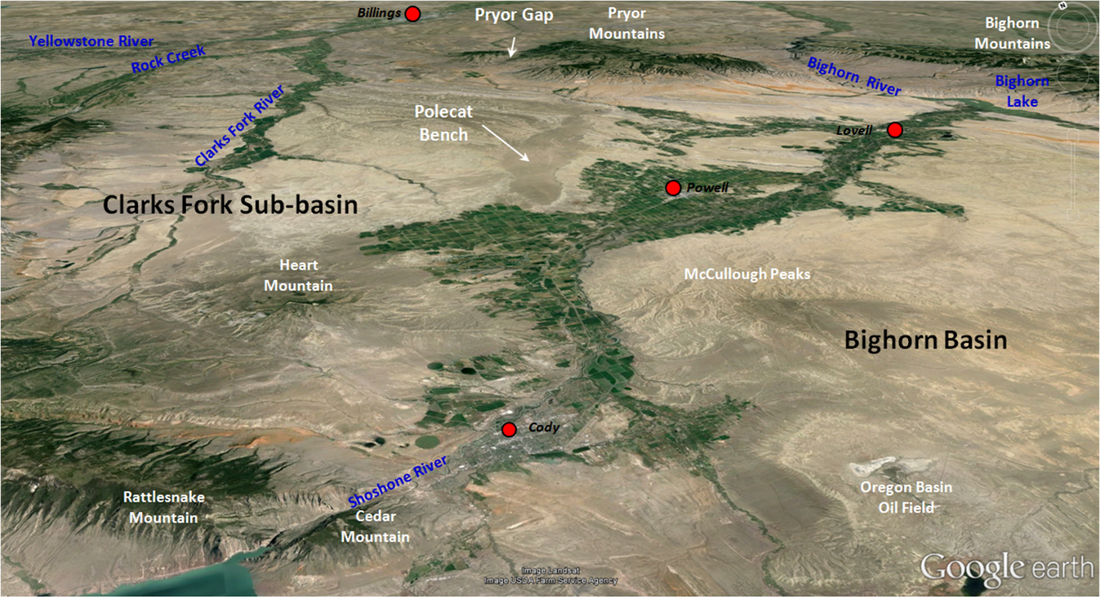 Polecat Bench area in the northern Bighorn Basin, Park County, Wyoming.  Image from Google Earth.
​In the Early Pleistocene, the continents were arranged near their current positions. North America was undergoing glaciation. Mega-mammals, now extinct, such as wooly Mammoth, short-faced cave bear, lion, cheetah and camel walked the fluvial landscape of the Bighorn Basin. The Yellowstone Volcanic Province, 80 miles to the west, was active. Streams draining the basin were slowly creating the topography we see today by eroding the soft sedimentary rock in the basin and carrying it to the Gulf of Mexico. Native Americans would not appear in the basin for another 1.4 million years (about 12,000 years ago).
​
The current drainage path of the Shoshone River was established 1.45 million years ago when a tributary of the Bighorn River captured the Shoshone by the process of headward erosion. The former course flowed northeastward across Polecat Bench and through Pryor Gap to join the Yellowstone River.

Before (left) and after (right) block diagrams of stream capture. Tributary stream moves closer by erosion.
After Casito, 2004, Stream_capture.png
​Gravels deposited by this ancient river have subsequently prevented erosion and resulted in an elevated terrace or bench along its abandoned course.  Underneath the capping gravels are much older Eocene, Paleocene and Cretaceous strata.  Terraces, buttes and benches throughout the basin are capped by similar abandoned river gravel deposits. 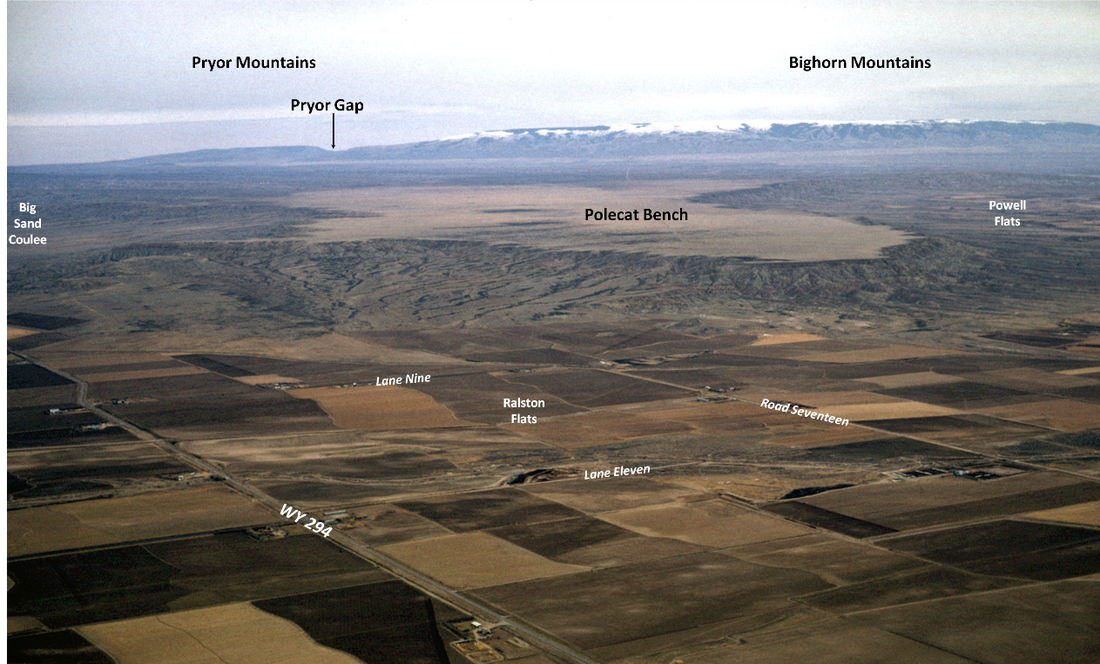 Polecat Bench from about 15 miles NNE of Cody, WY. This feature is armored by stream gravel, and it represents a small part of the sediment that once filled the Bighorn Basin. View to NNE.  After Maher, L.J., Jr., 1966, Polecat Bench Image 131-34 ftp://ftp.geology.wisc.edu/maher/air/131-34k2.jpg 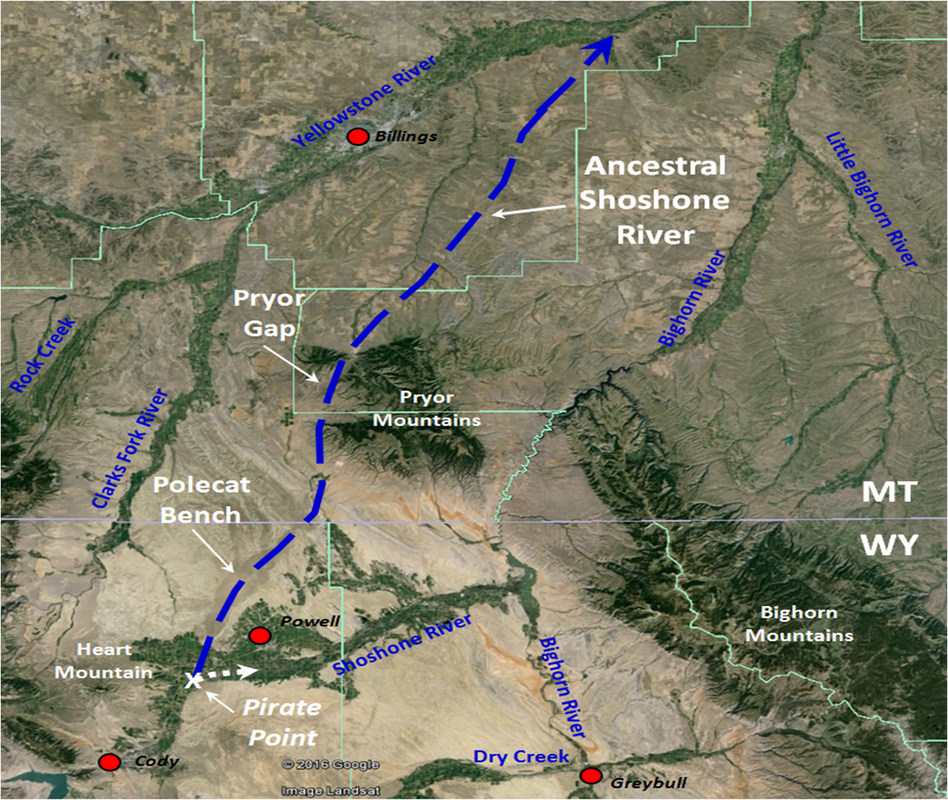 ​Polecat Bench contains the most complete stratigraphic and fossil record of the Late Cretaceous through the Eocene on earth. It is the “ideal terrestrial reference section” for this portion of the stratigraphic column. The area has been studied by geologists and paleontologists for over 125 years. 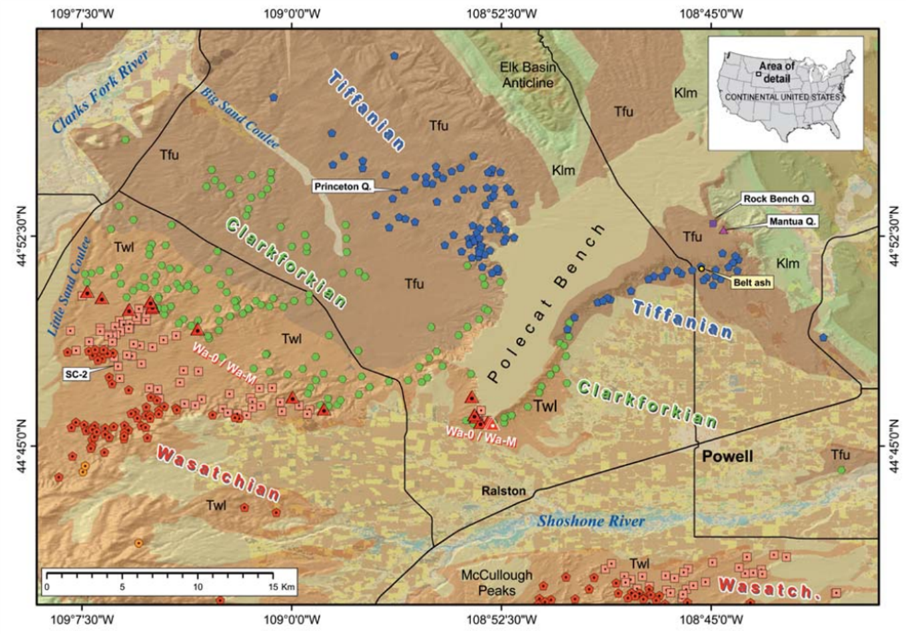 The Eocene Willwood formation on Polecat Bench, and throughout the basin, has a distinctive “candy stripe” red-banded appearance. Twenty-five years ago a major geologic event was recognized at the boundary with the underlying Paleocene Fort Union formation, the Paleocene-Eocene Thermal Maximum (PETM). This worldwide occurring event is well exposed on the southwestern flanks of Polecat Bench.

The PETM was a significant global warming event that occurred about 56 million years ago at the boundary between the Paleocene and Eocene epochs. This warming event was a result of a massive carbon release into the oceans and atmosphere that shows up in the sediments as a carbon spike.  The released carbon combined with oxygen to become the greenhouse gas CO2, which then trapped heat and resulted in global temperatures rising 9 to 14 degrees Fahrenheit over a few thousand years.  It then took about 100,000 to 200,000 years to dissipate the warming to the background temperatures for that time, which were already elevated compared to today.  Sediments deposited during this event have been studied extensively because it is an ancient example of global climate warming.  It provides scientists an opportunity to see the effect of climate change on animal and plant evolution, migration and extinctions. The PETM was first recognized in marine sedimentary core from near Antarctica (ODP 690B) in 1991 (Kennett and Stott, 1991).  Correlation of marine to continental data was reported in 1992 (Koch, Zachos and Gingerich, 1992). The Bighorn Basin has the best known and most studied PETM outcrops with mammalian fossils.  Much of this work was performed by Dr. Philip Gingerich and his students from the University of Michigan.

Three major mammal orders appeared suddenly during the PETM.  These include Primates, Artiodactyla (even-toed hoofed animals that include the camel, deer and pig), and Perissodactyla (odd-toed ungulates such as the horses and zebras).  Research on the Bighorn Basin fossils showed the mammals decreased in size during the PETM.  It is thought that the higher CO2 concentrations reduced the nutritional value of the plants on which the mammals fed.  Leaf damage by insects increased during the PETM which may have been due to more insects or less plant nutritional value. Overall during the PETM, many land species evolved, thrived and expanded their ranges.  Tropical plants and shallow water marine micro-organisms flourished, a veritable Garden of Eden.  However, benthic foraminifera living on the sea floor suffered major extinctions.
​
The source of the massive carbon release is somewhat of a mystery.  Some of the prevailing explanations are: 1) melting of frozen methane (hydrates) in the sediments on the sea floor, 2) volcanic eruptions, 3) burning of peat beds and/or decomposition of organic material, 4) a carbon-rich comet, and 5) emplacement of kimberlite pipes in northern Canada.  The melting of hydrates releasing methane is the favored explanation, but the reason for the hydrate melting is also uncertain.

What you will see at PETM

This is exciting stuff for many geologists because the PETM climatic event may tell us something useful about the current anthropogenic carbon climate event.   However, to most non-geologists and even to some geologists, these are just hot and dry badlands.  The sediments consist of grey, red, brown and purple mudstones with a few sandstones and siltstones that were deposited in a river and floodplain environment.  The major trunk stream was flowing north along the axis of the basin.  The more brightly colored mudstones are soil horizons.

​Starting at the intersection of US 14, 16, 20 (Sheridan Ave) and US 14A (16th St) in downtown Cody, head northeast toward Powell on US 14A,  13.0 miles is the turnoff on left for Heart Mountain and the turnoff for the Heart Mountain Relocation Interpretive Center and National Historic Landmark.  During World War II, 14,000 Japanese-Americans were moved from their homes on the west coast to this internment camp making it the third largest population center in Wyoming.  At 15.0 miles turn left on WY 294, 19.7 miles turn right on Lane 9, 21.4 miles pull-off on side of road to view PETM to north or left (see picture above).  The PETM is the bright red interval of mudstones.  Unfortunately there is no direct public access here to reach the PETM on federal land to the north.  If you must touch the PETM, continue east on Lane 9, 23.4 miles turn left on gravel road near power poles, 23.8 miles take left fork in road that goes straight (not main gravel road that curves right), 24.2 miles road turns hard right, multiple gravel roads head northwest at this area toward PETM badlands, take one that looks to you to be in the best condition. The PETM is the red interval that appears near the top of the ridge.  It looks like a small fault has upthrown this area compared to the PETM viewed from the road and picture.  This area is continuous federal along the escarpment back to where the picture is located (21.4 miles).  On federal land, you are not allowed to keep any mammal fossils you may find.  You can collect fossil plant material if it is considered common. 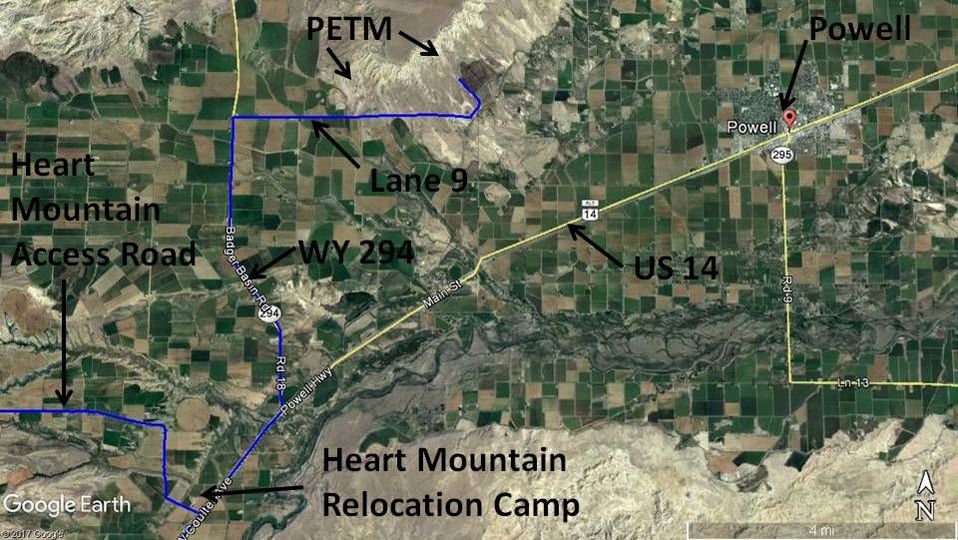