The route from the intersection of US-14 and Red Gulch Road climbs from the Shell Creek valley to the foothills bench along the west flank of the Bighorn Mountains. The backcountry byway is located on a folded structural bench elevated by the westward directed Potato Ridge Thrust onto the eastern edge of the Greybull Platform. Shell Dome and Cherry Creek Anticline are asymmetric folds developed on that monoclinal bench. Wildcat wells drilled since the late 1950s for oil and gas on these structures were unproductive in the Phosphoria and Tensleep reservoirs. 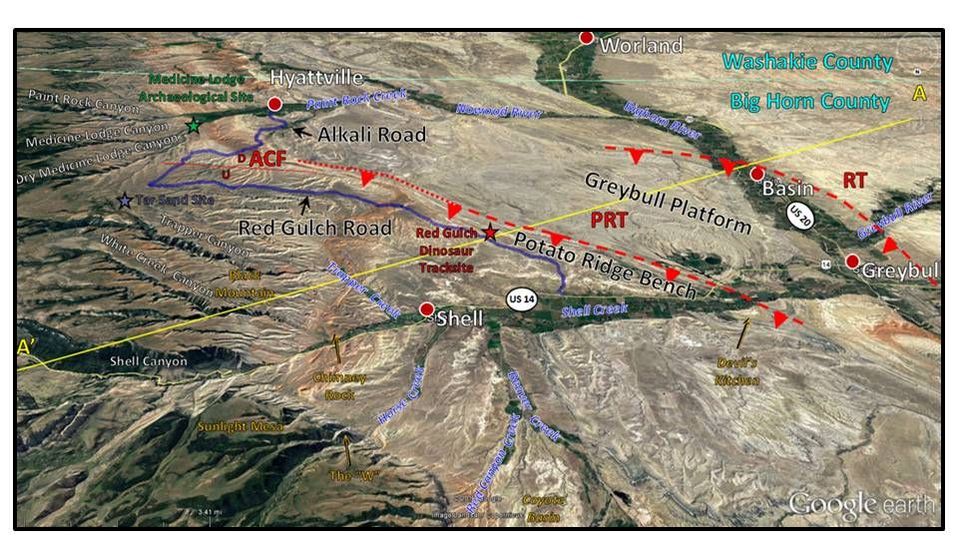 Structural cross section across the Bighorn Mountains showing the Greybull Platform and Potato Ridge Monocline on the western flank of the uplift. RT: Rio Thrust, PRT: Potato Ridge Thrust, SBCT: South Beaver Creek Thrust (note this fault is “blind” here and does not cut the sedimentary rocks above but forms a steep monocline), PCT: Piney Creek Thrust.
Image: After Stone, D.S., 2004, Rio Thrusting, Multi-Stage Migration, and Formation of Vertically Segregated Paleozoic Oil Pools At Torchlight Field On the Greybull Platform (Eastern Bighorn Basin): Implications For Exploration: RMAG The Mountain Geologist, Vol. 41, No. 3, Fig. 2, p. 121.
The scenic landscape of the western slope of The Bighorn Mountains is spectacular. The view from the road across the flat of Potato Ridge surface is broken by deeply eroded canyons that display the multiple colors of the rock formations. The byway also passes near three wilderness study areas (WSA): Trapper Creek, Alkali Creek and Medicine Lodge. 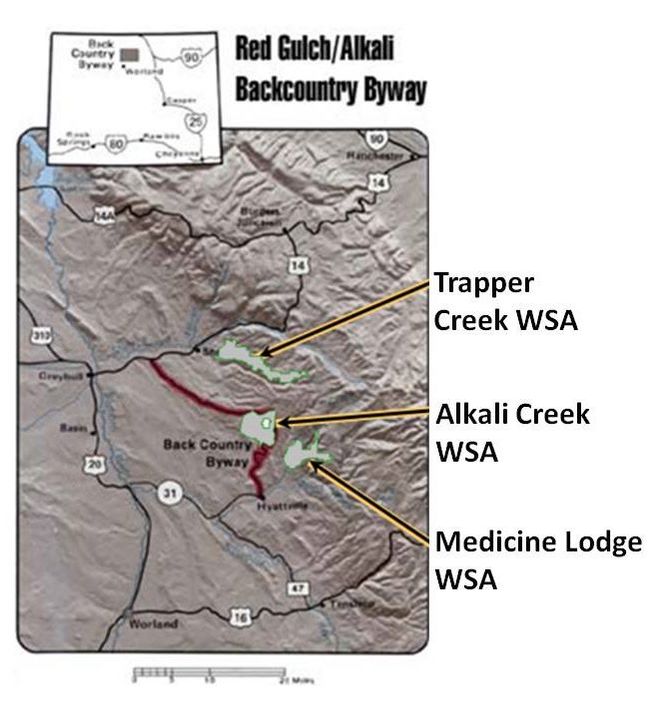 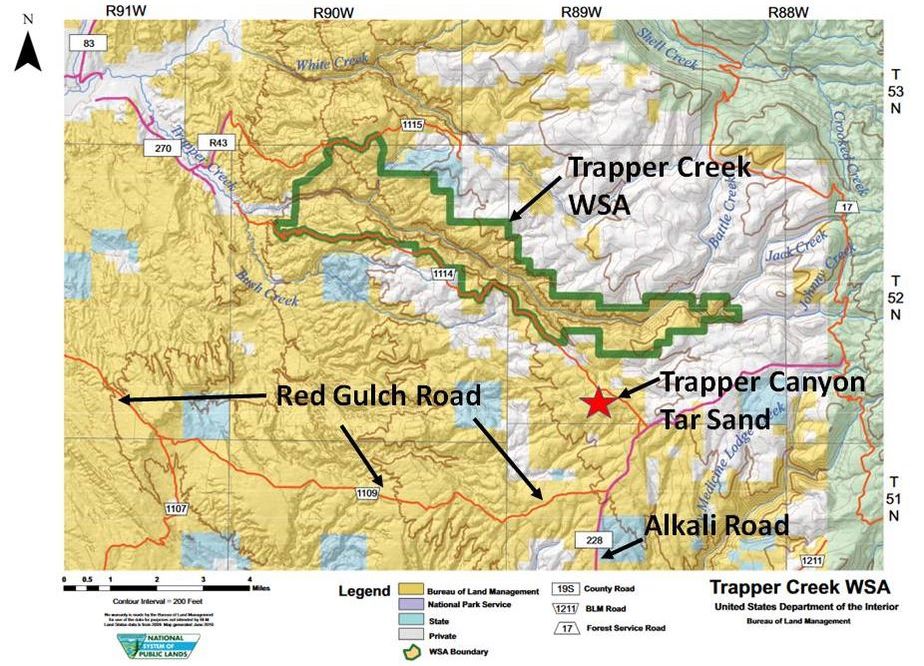 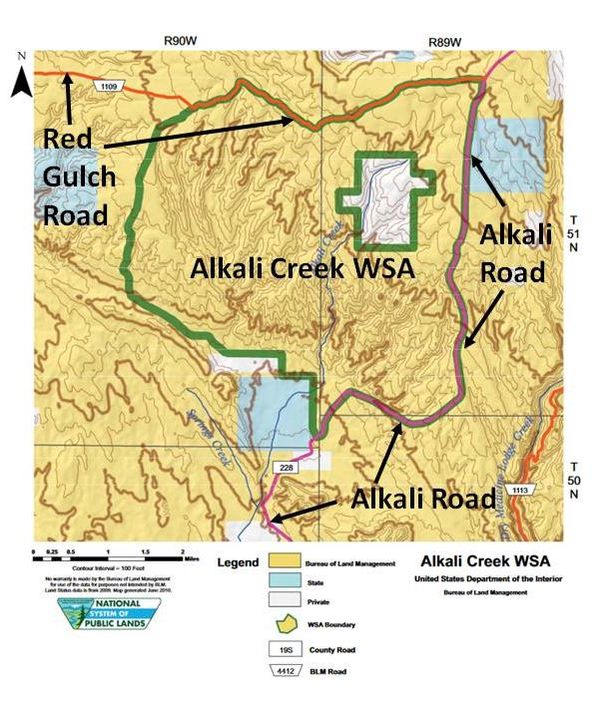 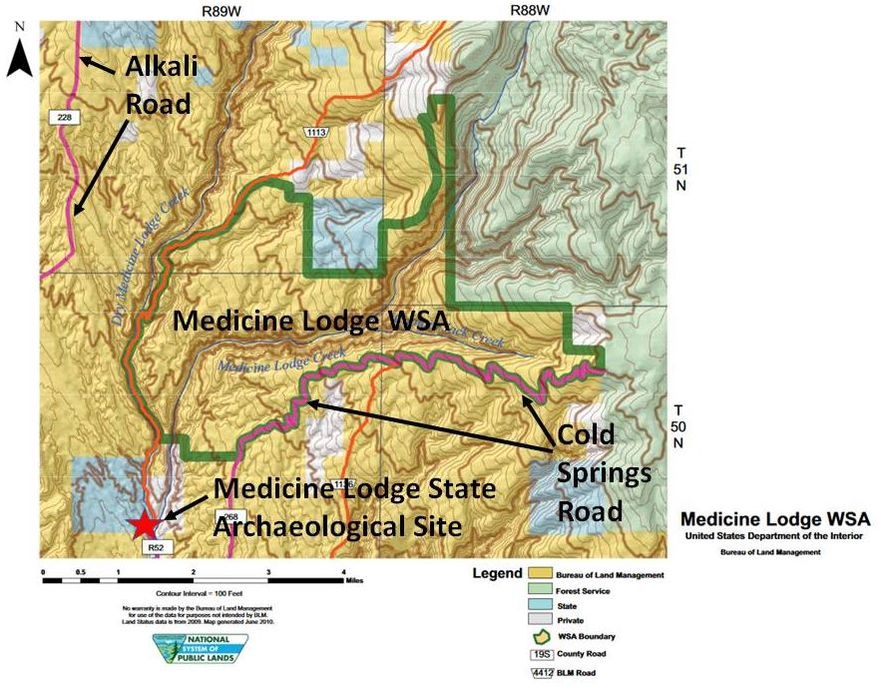 Medicine Lodge Wilderness Study Area BLM map. The easiest access to this WSA is via the Medicine Lodge State Archaeological Site or the Cold Springs Road. See Geowyo Medicine Lodge Tensleep Sandstone page for details on this area.
Image: BLM  ​
What follows is a geologic roadlog for the 35-mile route along the Red Gulch Alkali Backcountry Byway. The mileage for each section is posted to the left with blue values for southward travel and brown for northward travel. The description for each increment is on the right. Viewing orientations are reported as compass directions with a parenthetic colored “L/R” depending on the direction the byway is traversed. You do not need 4WD for this non-paved road, but conditions must be dry. May to October is the best time to visit. 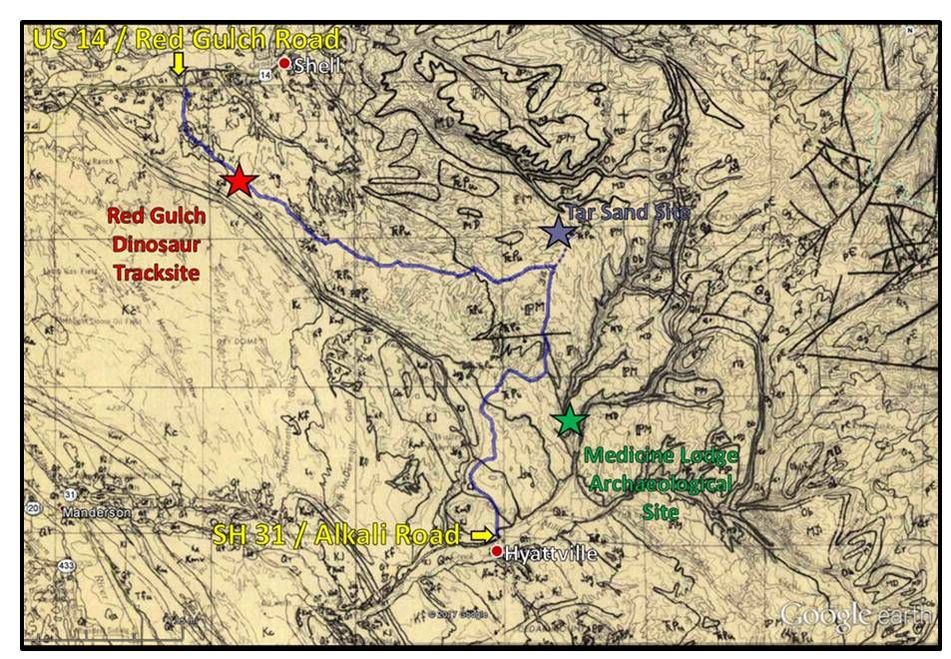 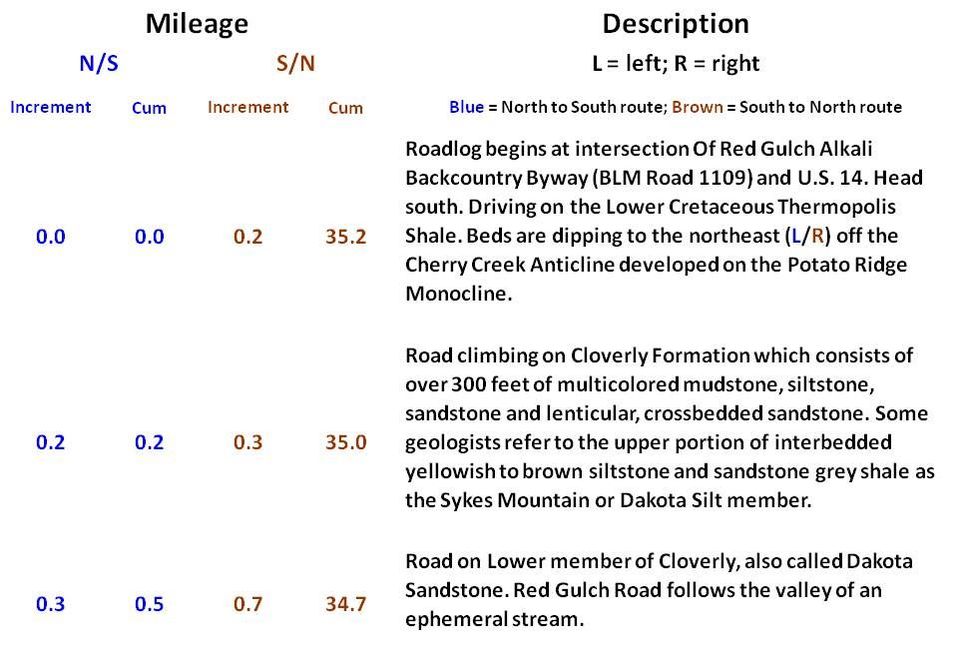 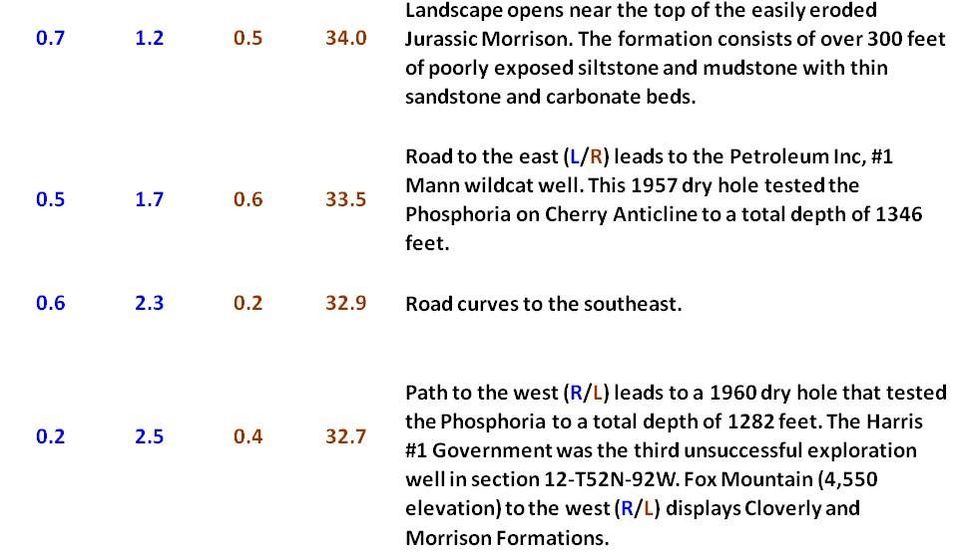 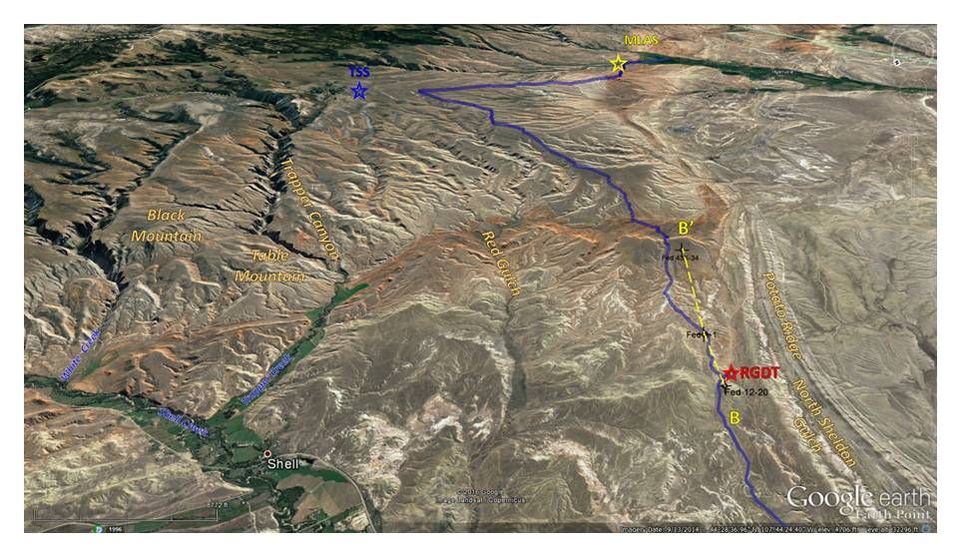 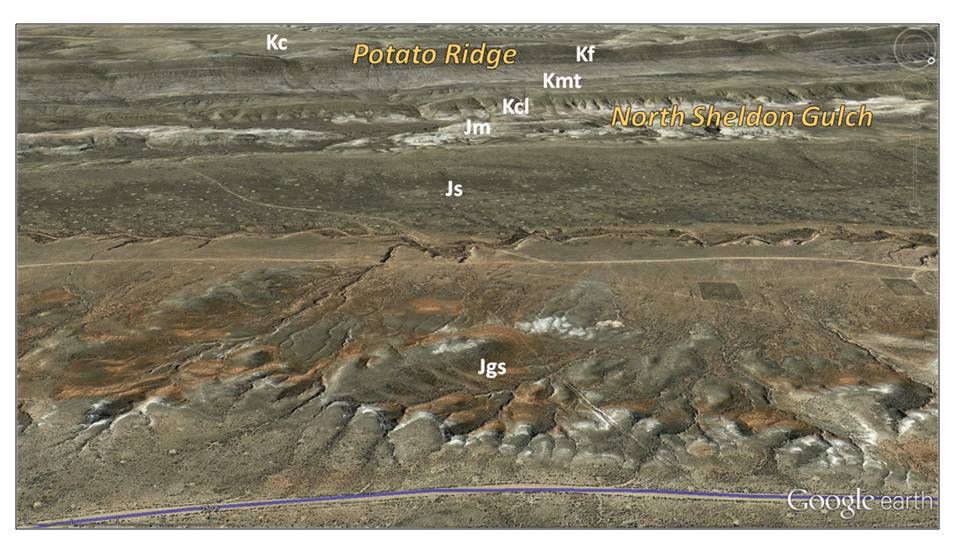 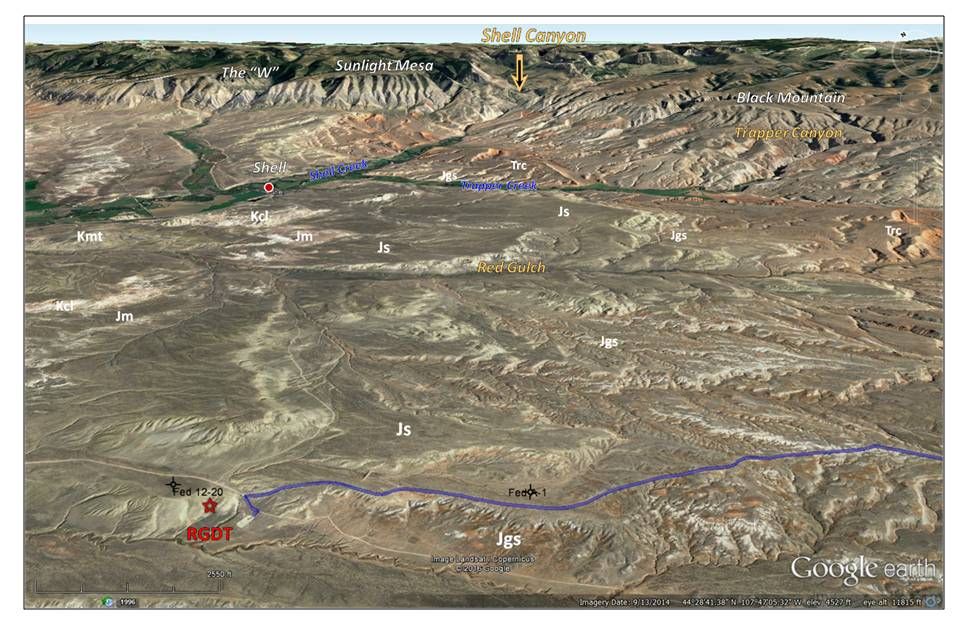 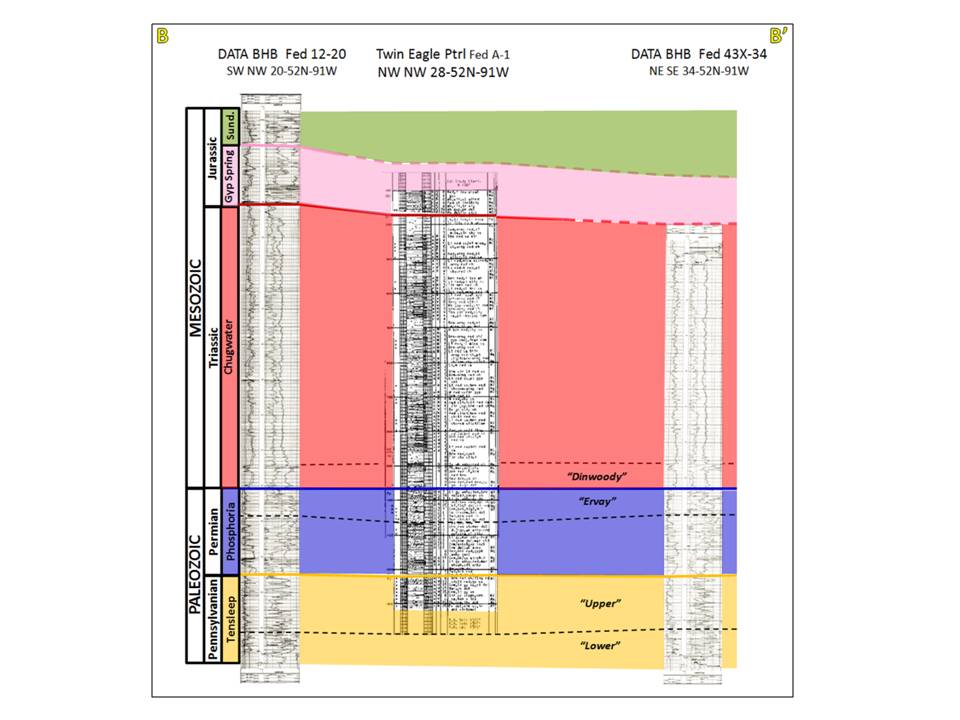 Subsurface log stratigraphic cross section with petroleum industry nomenclature. The Dinwoody Formation here consists of red silt and shale with anhydrite, and is indistinguishable from the overlying Chugwater Formation. The Phosphoria here is mostly Goose Egg red beds with the upper unit consisting of “Ervay” carbonate. Reservoir rocks had oil stain but found no commercial production. The lack of production is maybe due to the flushing of the structures by groundwater flow that is recharged on the nearby flanks of the Bighorn Mountains.
Image: Logs from the Wyoming Oil and Gas Conservation Commission website. http://wogcc.state.wy.us/ 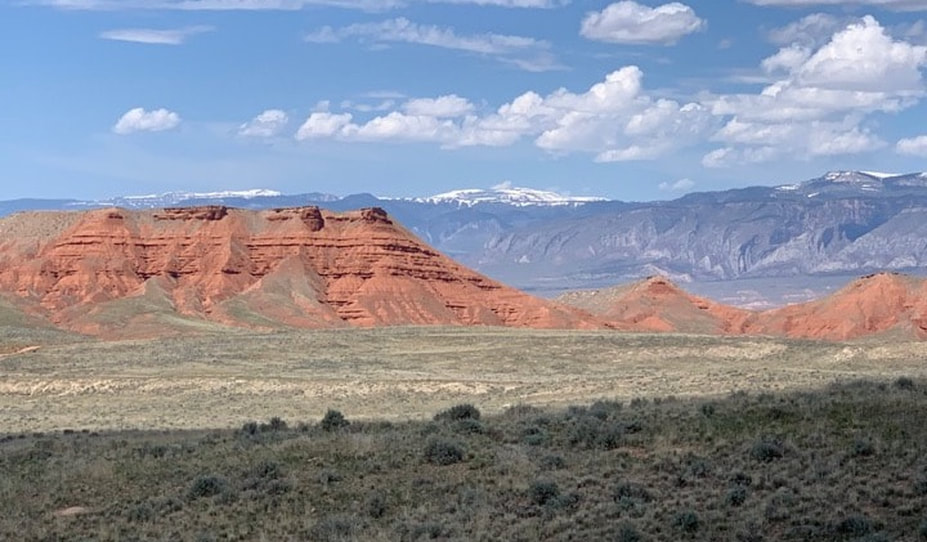 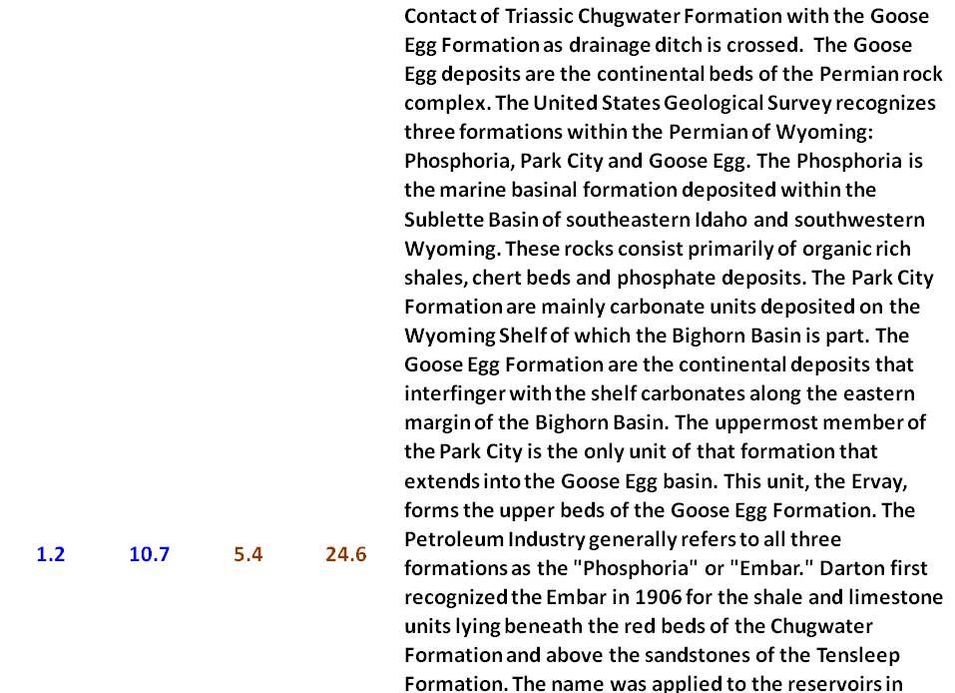 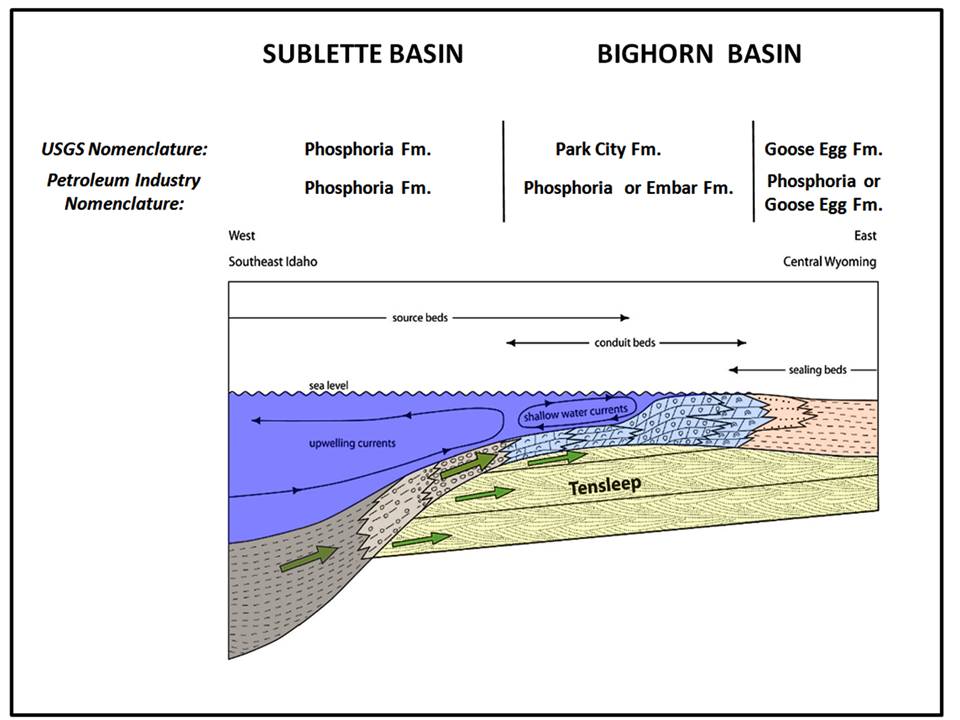 Cross section model of the Permian Rock Complex of the Bighorn Basin area showing formation nomenclature. Hydrocarbons were generated and began to migrate from the Sublette Basin onto the Wyoming Shelf about 160 million years ago. Both the Phosphoria/Park City and Tensleep acted as carrier beds (green arrows). The gas and oil were originally held in stratigraphic traps until structural traps were created by the Laramide tectonism. The hydrocarbons remigrated into the structural traps present today. Groundwater movement added a final adjustment of the hydrocarbon columns, particularly to the fields in the northeastern part of Bighorn County (e.g. Frannie, Sage Creek, and North Deaver). Cottonwood Creek Field is the only stratigraphic accumulation known in the Bighorn Basin. The complex is located about 8 miles south of the Big Horn – Washakie County line in Townships 47-48 North, Ranges 90-92 West. The Trapper Canyon Tar Sand Deposit is an exhumed example of one of these early stratigraphic traps (see: http://www.wsgs.wyo.gov/products/wsgs-1985-ri-30.pdf).
Image: After Yin et al., 2011, Tensleep TZ/ROZ Study, Bighorn Basin: A Revolutionary Concept on Oil Recovery: UW EORI CO2 Conference, Slide #25 (After Stone, 1967)  https://www.uwyo.edu/eori/_files/co2conference11/yin%20-%20rozstudy.pdf 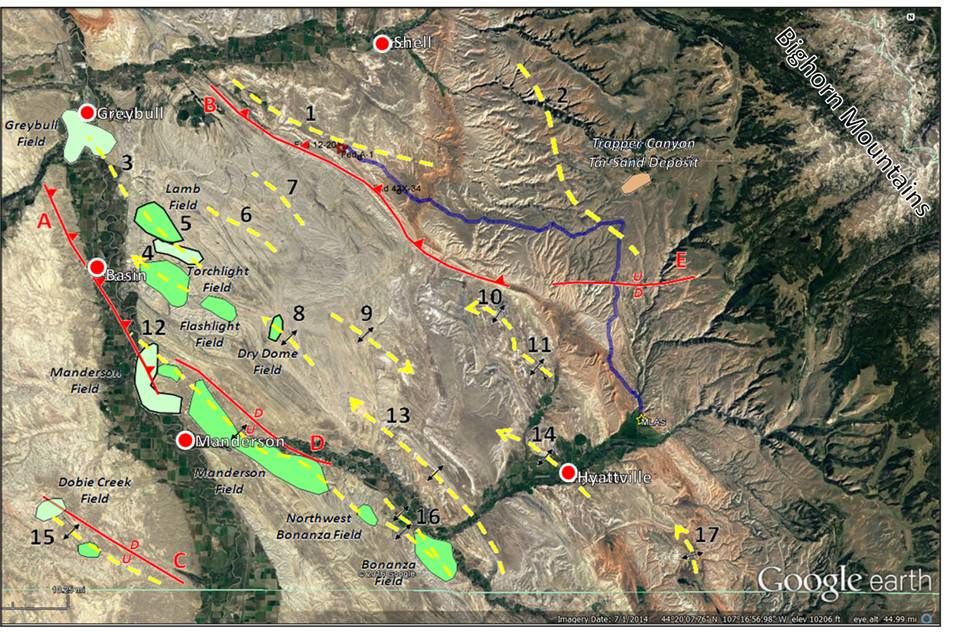 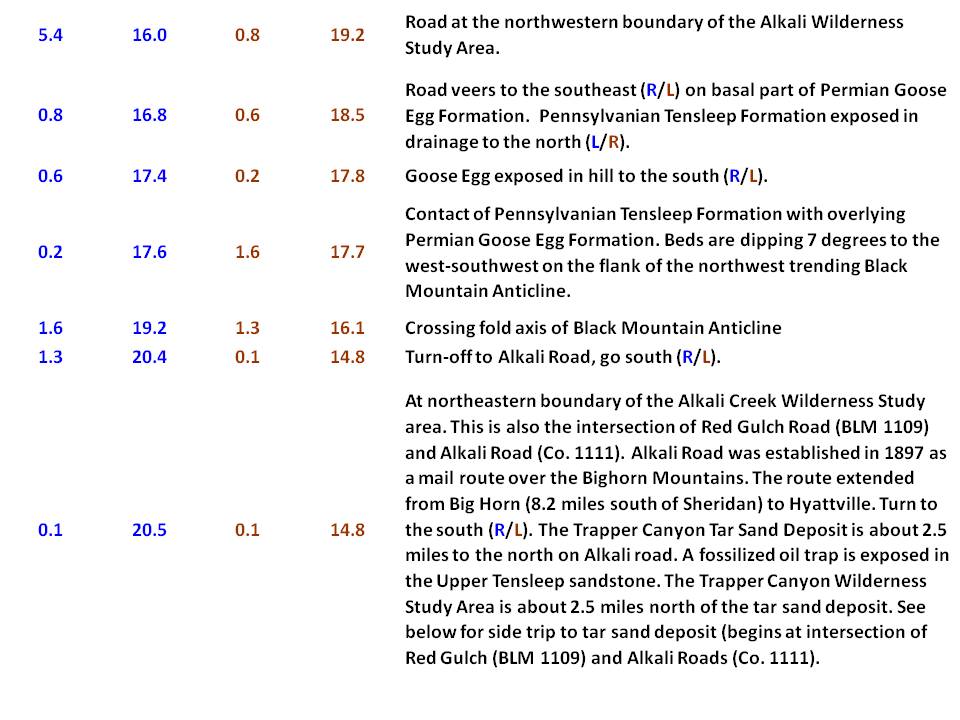 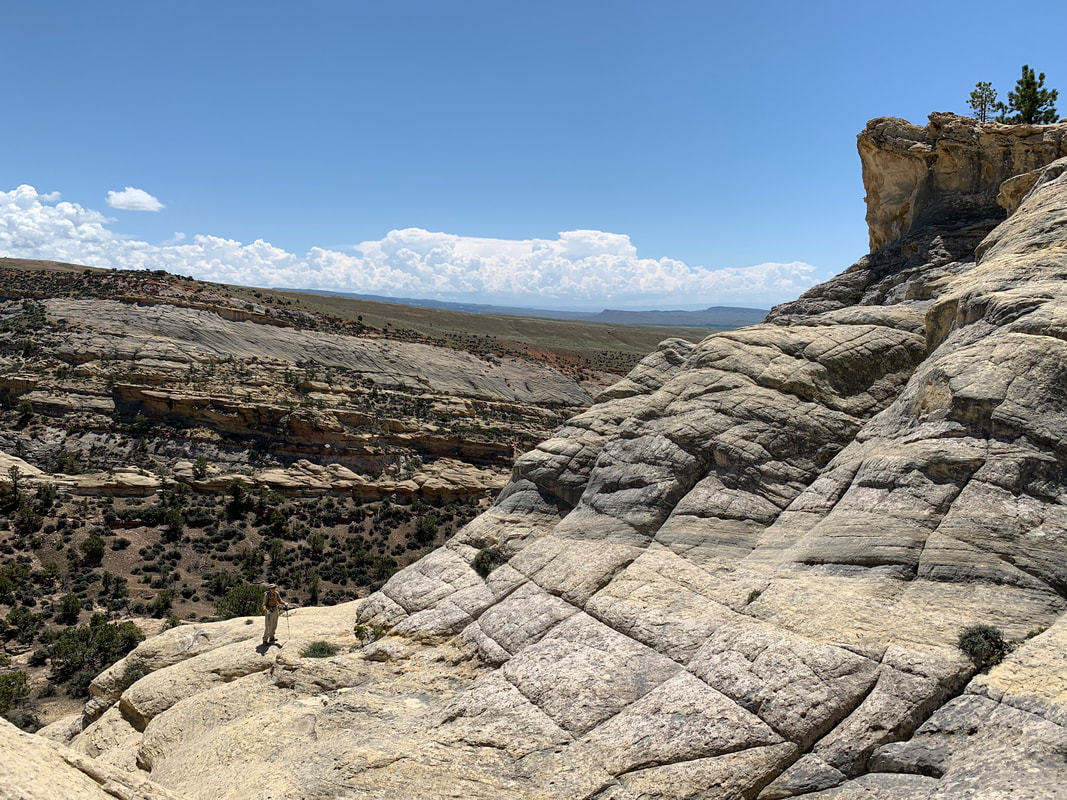 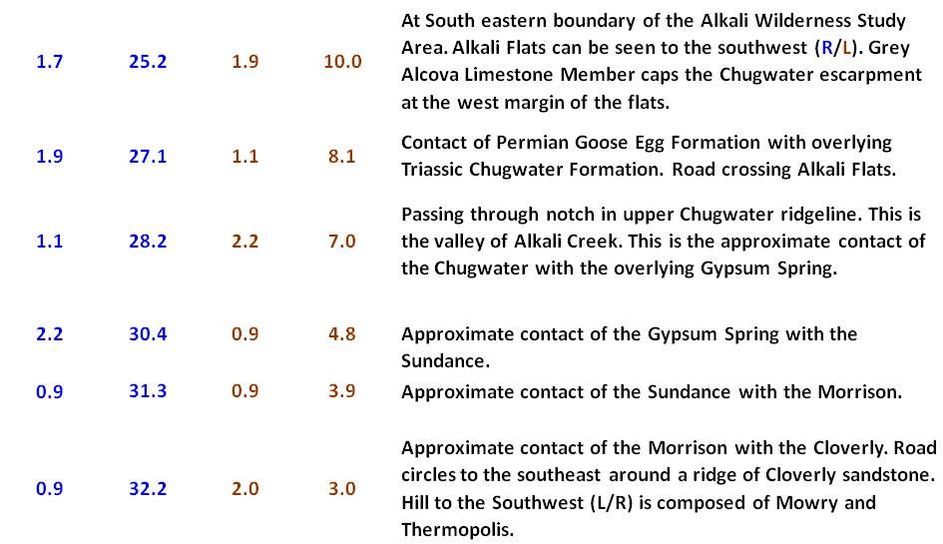 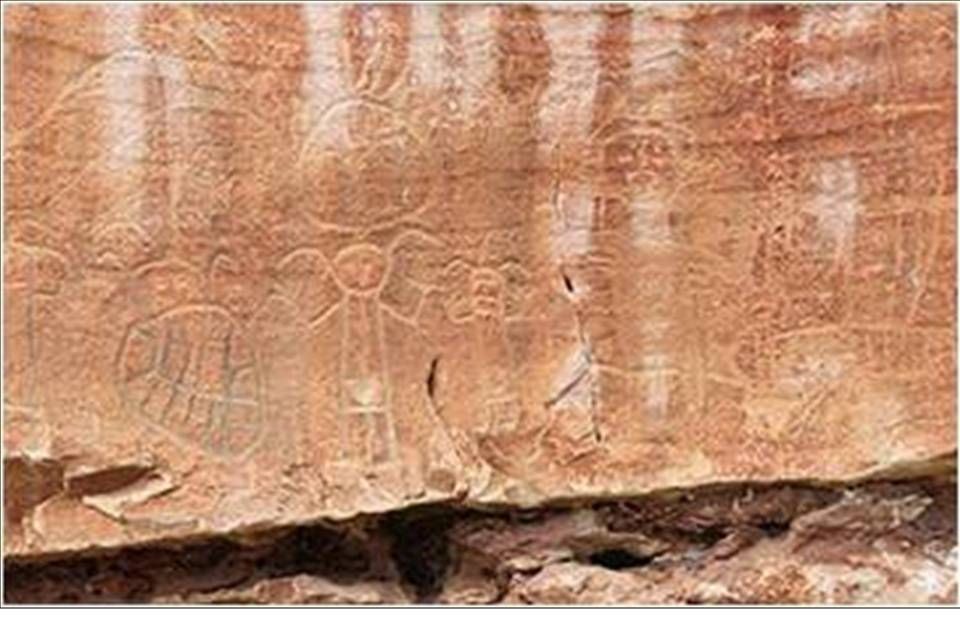 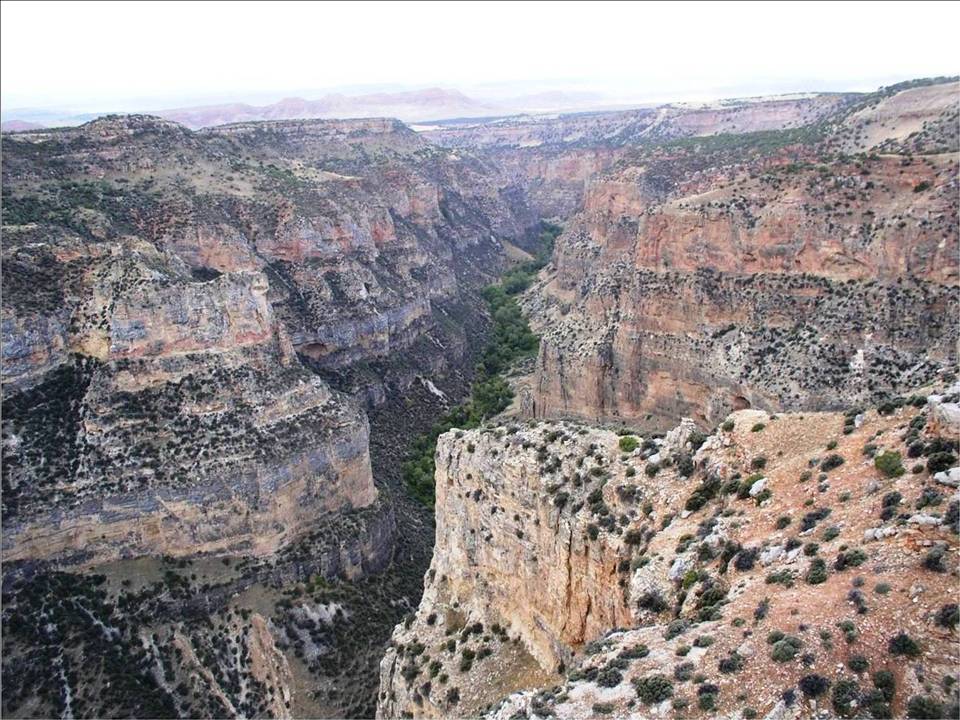 The Trapper Canyon Tar Sand Deposit is an outcrop example of a stratigraphic oil trap developed in the Tensleep Sandstone. Stratigraphic trapping of oil in the Tensleep and its equivalent the Minnelusa is common in the Powder River Basin, east of the Big Horn Mountains, but stratigraphic traps are rare in the Tensleep in the Bighorn Basin. This accumulation occurs at two topographic hills informally referred to as Deposit A and B. The accumulation at Deposit A is larger and may contain the equivalent of 1 to 2 million barrels of oil. A stratigraphic hydrocarbon accumulation within the Tensleep Formation can form by changes in the porosity and permeability of the sandstone (intraformational), or by erosional channels cutting down into the Tensleep filled with impermeable Phosphoria sediments that create a barrier to oil migration. It can also be a combination of these two factors. The oil trap at nearby Bonanza Field has both these stratigraphic factors and a structural anticline. The Medicine Lodge outcrop near Hyattville has an impermeable Phosphoria fluvial channel overlying the eroded upper surface of the Tensleep Formation.

Intraformational change is believed to be the oil trapping mechanism at the Trapper Canyon outcrop. The evidence for an intraformational stratigraphic trap at Trapper Canyon is: 1) the lack of a structural closure like an anticline or fault, 2) isolation of the oil accumulation to an interior sand in the Tensleep, and 3) the presence of non-oil charged laterally equivalent sands to the tar accumulation. This tar sand deposit displays the kind of stratigraphic trap in the Tensleep Formation that held oil for up to 90 million years, until the Laramide Orogeny (mountain building event 75-65 million years ago) created the anticlinal traps throughout the Bighorn Basin and Wyoming. The stratigraphically held oil began to re-migrate into these structures with the onset of this tectonic event.

The tar sandstone and the road to it are on BLM land and open to the public.  This side trip does not require 4WD, but does require a vehicle with good ground clearance. On outcrop, the tar sandstone is only about 5 to 10 feet thick and not well exposed. You can easily find it, but don't expect it to jump out at you. Look for the tar sand on a mostly covered slope immediately below a prominent ten foot thick, white to buff colored sandstone that forms a resistant ledge/cliff at the top of the Tensleep. The surface of the tar sand is grey. On fresh surfaces, the tar sand is black and smells of oil. There are a couple of small pits dug into the tar sand on the uphill or east side of Deposit A that provide the best exposures.

​Coming from Greybull and Shell on the Red Gulch Road (BLM 1109), turn left (northeast) on Alkali Road, 0.4 miles small knob on right is Tensleep Sandstone, road is on gentle grass covered Amsden Formation in upper reaches of Webber Canyon drainage, 0.8 miles cross cattle guard, 1.4 miles cattle corral on left with unmarked two-track road, 1.7 miles turn left on two-track road (1114), 1.9 miles junction with two-track road coming in from left, continue straight, 2.4 miles outcrop of Tensleep sandstone on right, reach fence line and gate, park on left just before fence and gate.  Walk west or slightly downhill on two-track road that parallels fence line toward slight knob or hill (Deposit A), ~0.05 miles cross fence at gate, ~0.25 miles small sandstone outcrop in the road near top of knoll/hill, do not continue to top of hill, but take a left and walk parallel to top of ridge, ~0.4 miles reach small pits with tar sand.  You can follow this tar sand along strike around the edge of this hill in a southwest direction. The tar sand is just below the prominent buff colored sandstone.

​Too many people erroneously think oil accumulations in the subsurface are in caverns or pools of oil.  Samples of this oil saturated sandstone provide a good example of what a conventional oil reservoir looks like with the oil located in the pore spaces between the sand grains. Although similar in appearance,  oil producing Tensleep Sandstone in the basin is stained brown with less grey and less black than this tar sandstone.

Left: West view of hill (Deposit A) with tar sand outcrops in area with trees
Right: Outcrop of Tensleep tar sands on side of hill
Images by Mark Fisher 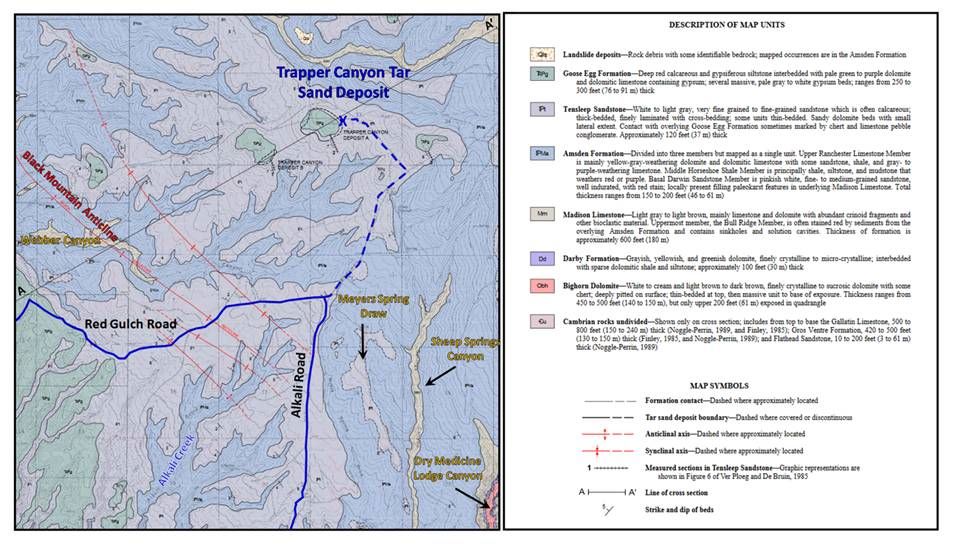 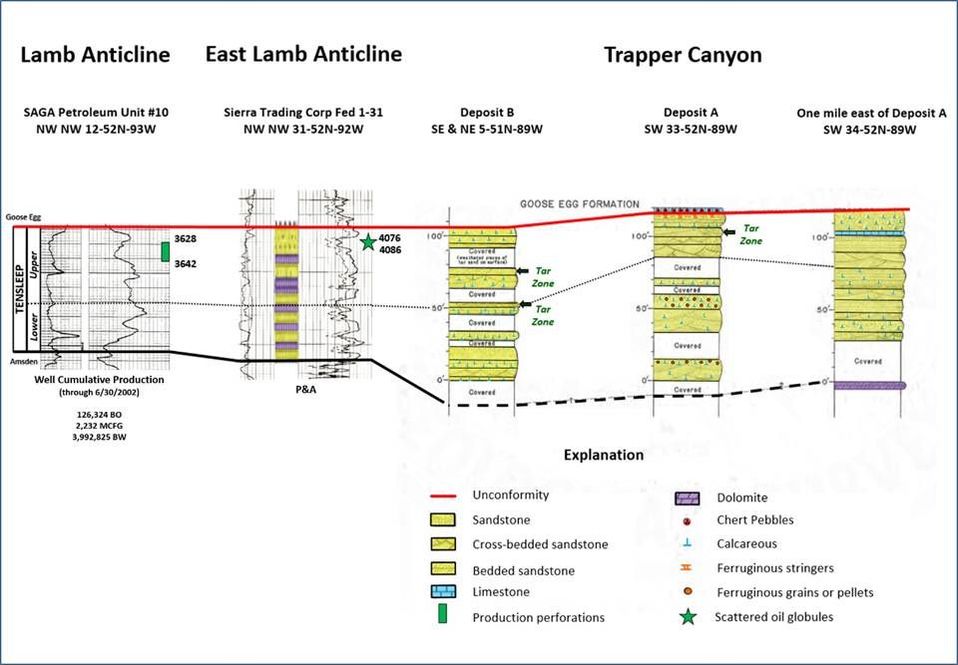