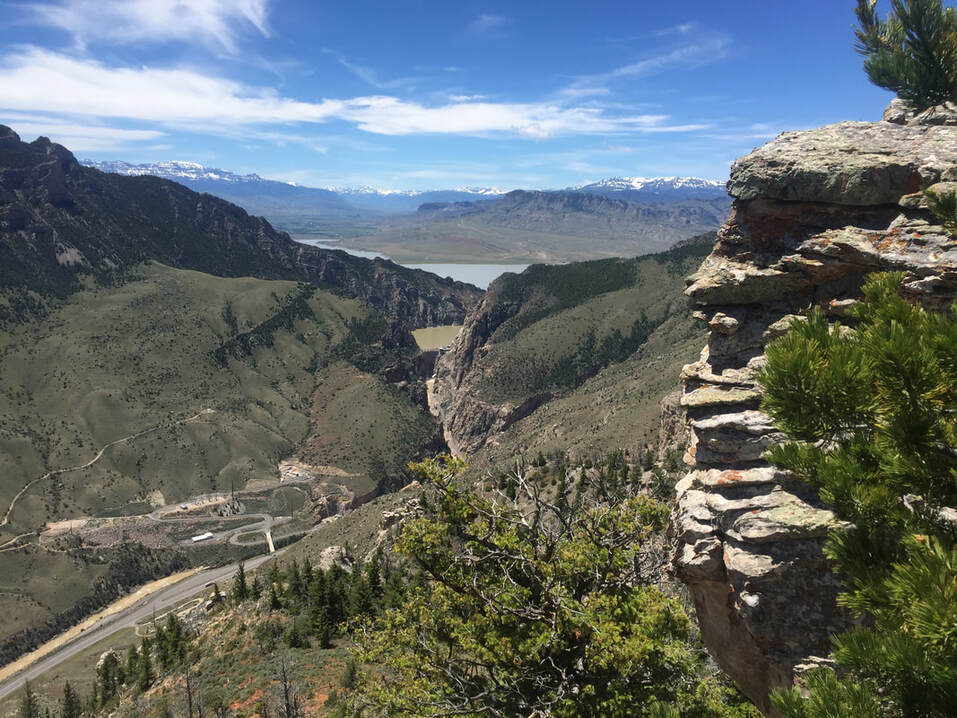 ​From atop the dam, views down the Shoshone Canyon with Precambrian igneous and metamorphic rocks, view across reservoir of folded sedimentary Paleozoic rocks in a geologic structure called an anticline on Cedar and Rattlesnake Mountains.  The Cedar and Rattlesnake Mountain anticline is a surface example of the geologic structures and rocks that produce oil and gas in the subsurface of the Bighorn Basin.  Optional scenic walk or bike ride up Shoshone Canyon.​

Six miles west of Cody, on the upstream portal to the Shoshone Canyon, sits one of the first "big dam" projects of the Bureau of Reclamation (established in 1902). The Buffalo Bill Dam was the crowning achievement of the Shoshone Project which brought water to the sage flats of the northern Bighorn Basin. When completed in 1910, the dam was one of the first concrete arch structures in America and the tallest dam in the world. 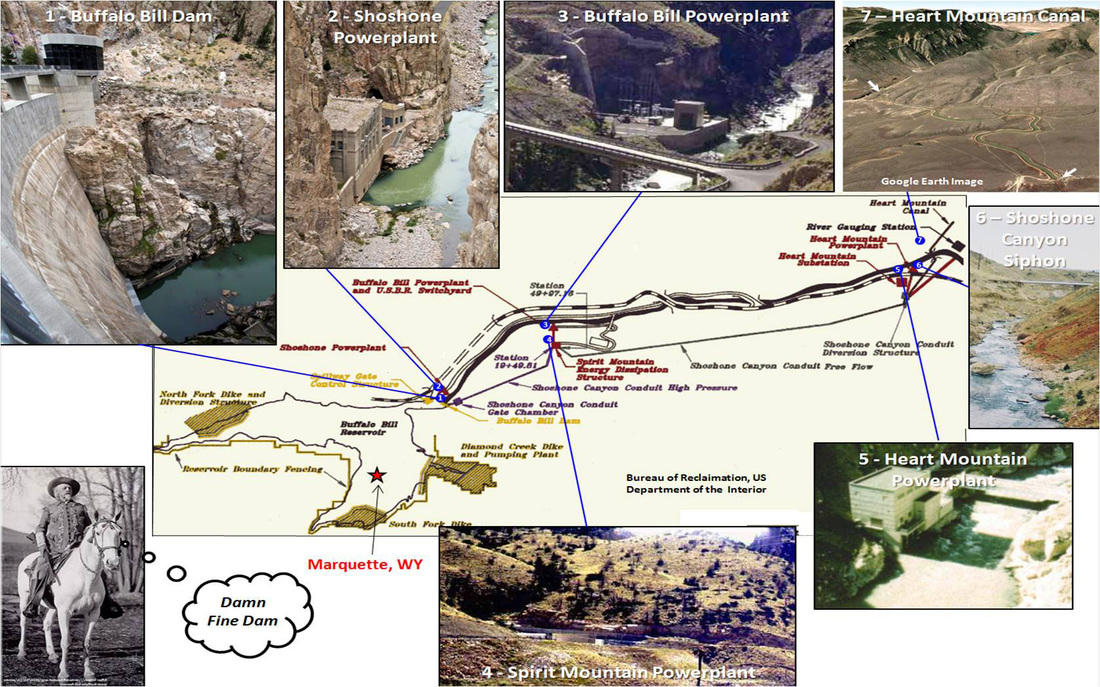 Shoshone project parts.  USBR: Images 1 through 5, https://www.usbr.gov/projects/index.php?id=33; Lim, S., 2009, Image 6; Google Earth, Image 7, Lawson, J., Map; Buffalo Bill Image: https://centerofthewest.org/2014/02/21/points-west-buffalo-bill-horses/
​See a five minute documentary entitled A Grand Vision: Shoshone Powerplant and Buffalo Bill Dam, by CyArk, 2016
The dam is anchored in old crystalline rocks that were part of Wyoming when it was a separate microcontinent, about 500 million years before the North American continent existed. The rocks belong to the Precambrian Archean eon which is more than 2.5 billion years old. 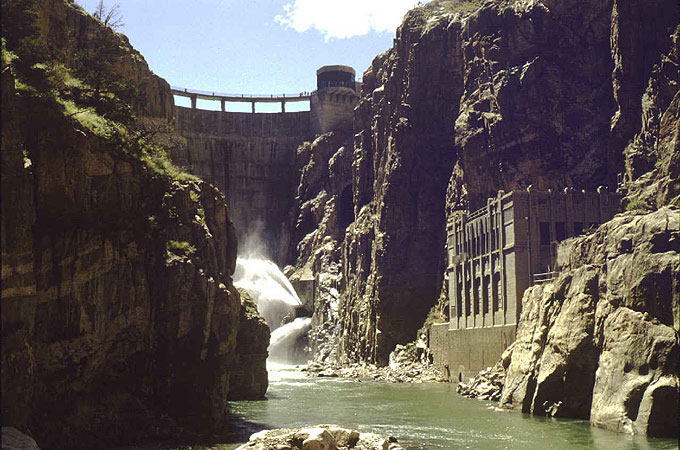 Archean gneiss and granite abutments of Buffalo Bill Dam.  Image from: https://upload.wikimedia.org/wikipedia/commons/7/7b/BuffaloBillDam.jpg
​The north side of the canyon is known as Rattlesnake Mountain.  Cedar Mountain is on the south side. These mountains form one geologic structure, a faulted anticline (see figure below), which was generated during the Laramide mountain-building episode. The Laramide reached this area about 70 million years ago. It produced the basins and mountains we see today.
Geologists debated the nature of these structures for decades. There were two main interpretations of the forces that produced these structures. One camp thought vertical forces on the basement caused these structures, while the alternate theory said they were produced by horizontal compression. What is curious is that both camps used the structure seen in Shoshone Canyon as evidence to support their respective interpretation. By the mid to late 1970s, seismic and well data showed that the “compressionalists” were correct. 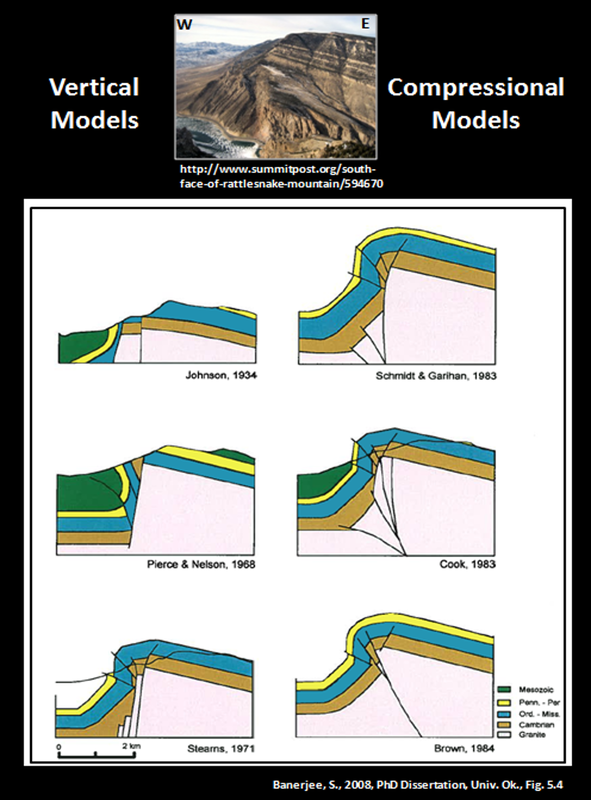 Interpretations of Rattlesnake Mountain Anticline. Top Image: photo by Tim Schoessler (musicman82)  http://www.summitpost.org/south-face-of-rattlesnake-mountain/594670 ; Bottom Figures: Banerjee, S., 2008, PhD Dissertation, Univ. Oklahoma, Fig. 5.4
​The mountains began to erode as soon as uplift started. The eroded sediment was deposited in the adjacent basins.  By about 10 million years ago the basins were filled and the sediment lapped onto the mountains, entirely burying them in some places. Rivers flowed on these ancient landscapes carrying sediment and began to erode with regional uplift some five million years ago. The Shoshone River was one such stream that eventually got trapped in its path by resistant rock and continued to cut downward through the crystalline basement. Flowing water carved the mountain into two pieces, Cedar Mountain and Rattlesnake Mountain.  Geologists refer to this as a superposed river. The results of this process can be observed in several places in Wyoming.  The canyons produced this way have a characteristic "V" shaped profile. 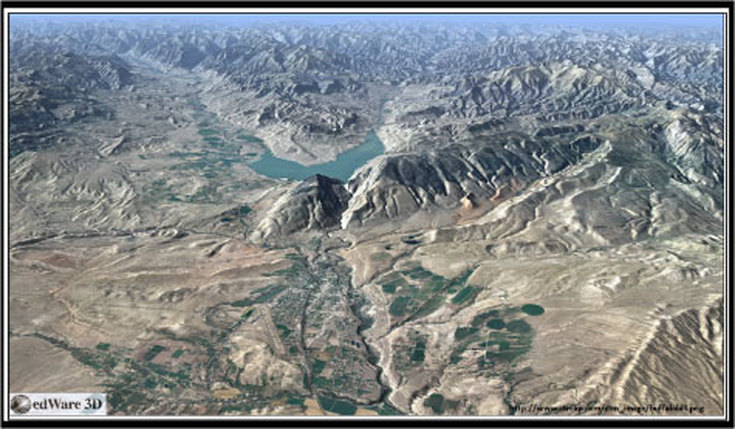 V-shaped profile of Shoshone Canyon.  Image from: http://www.ctmap.com/serendipity/index.php?/archives/72-Superimposed-Rivers.html#comments
Russell, E., 2013, Superimposed Rivers in the Bighorn Basin, WY
​Remnants of the basin fill have been found at high elevation on the mountains. At one time this fill extended from the top of the Rocky Mountains eastward onto the Great Plains. The badlands and monuments in South Dakota and Nebraska are parts of this basin-fill. 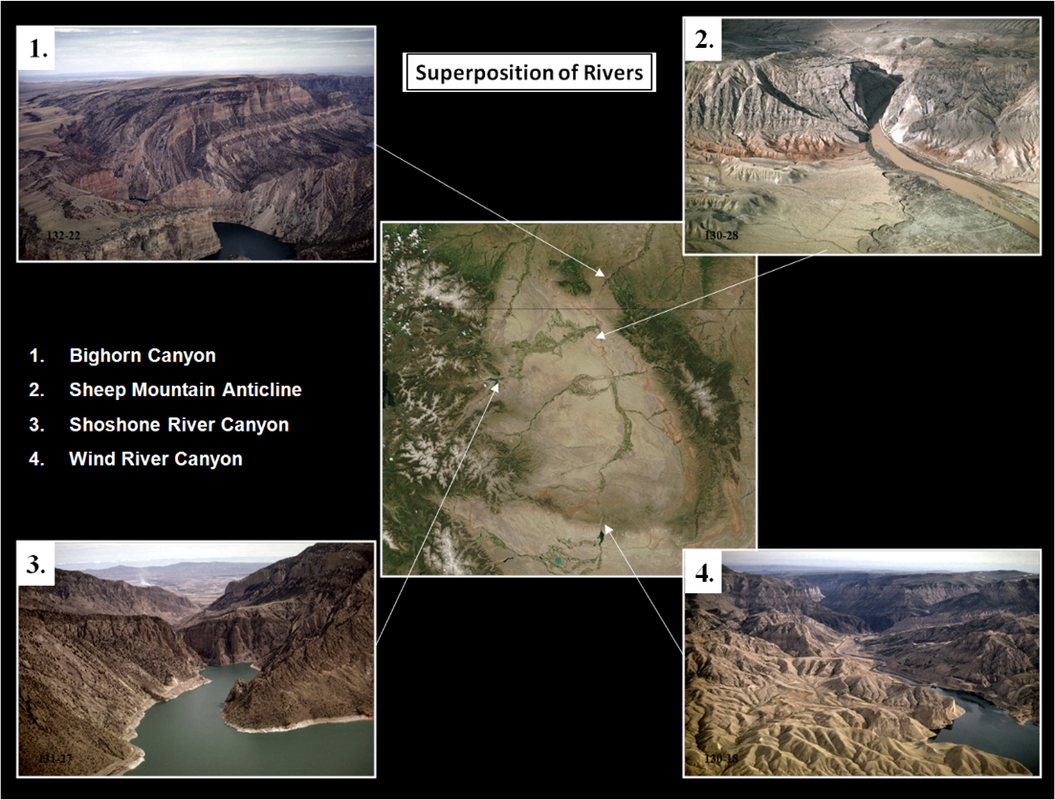 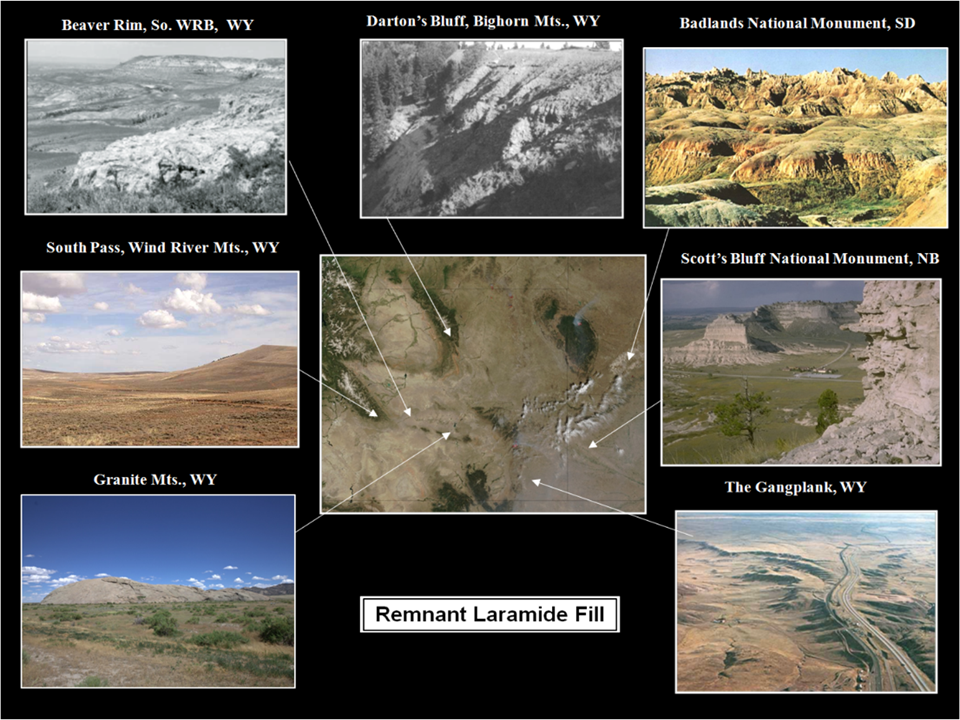 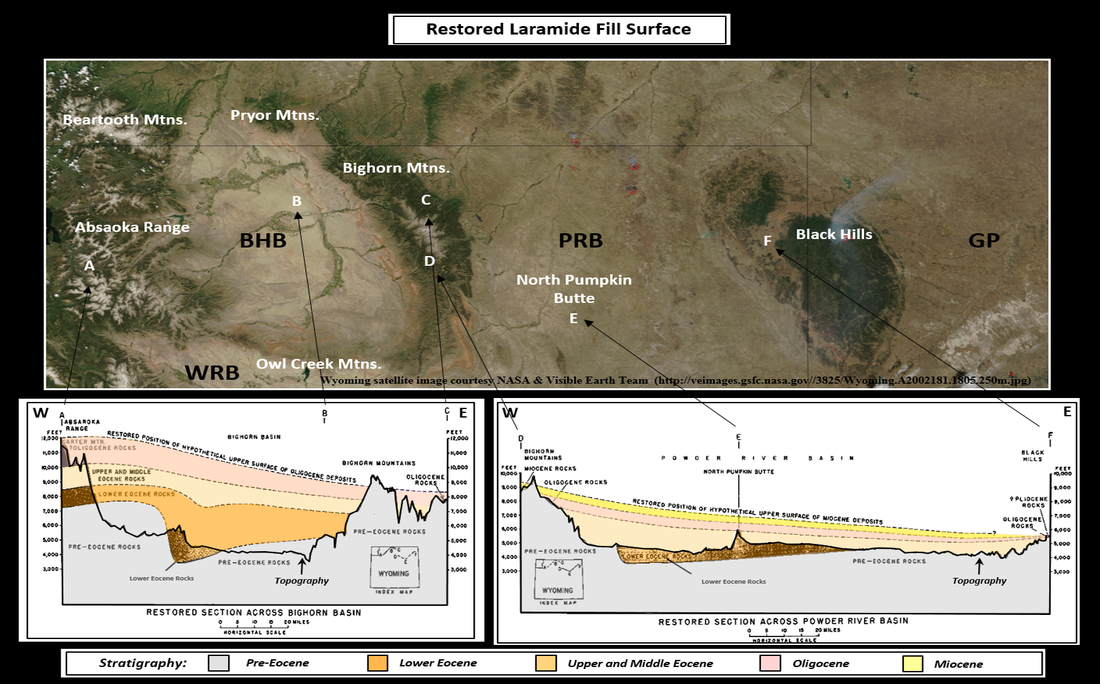 Restored Laramide fill from the Absaroka Mountains to the Black Hills of South Dakota. Wyoming satellite image courtesy NASA & Visible Earth Team https://visibleearth.nasa.gov/images/71527/montana-idaho-and-wyoming. Cross section after McKenna, M. C. and Love, J. D., 1993, AMNH Novitates, Figs. 2A & 2B, p.4 & 5. http://digitallibrary.amnh.org/bitstream/handle/2246/2698//v2/dspace/ingest/pdfSource/nov/N2490.pdf?sequence=1&isAllowed=y
​If you look up at the Laramide Mountains of Wyoming you may note a flat surface at about 9,000-11,000 foot elevation. This is called the "subsummit erosion surface" and it marks the high position of basin fill 10 to 5 million years ago when streams were able to carve this bench. 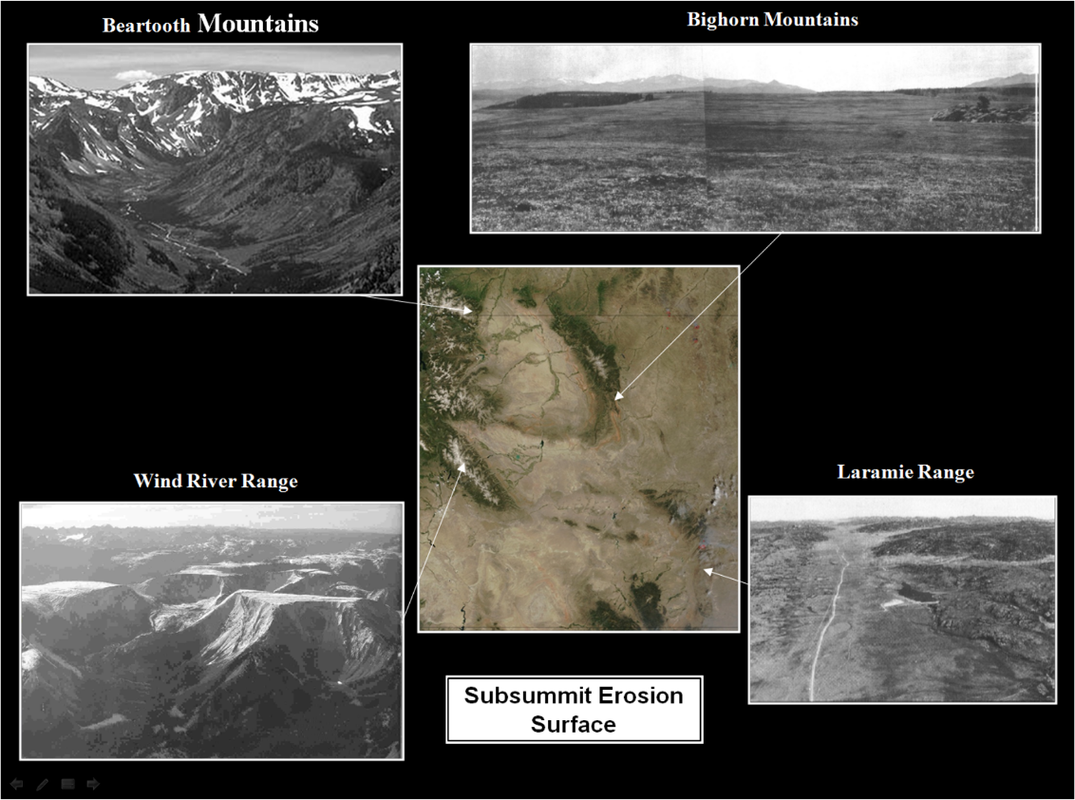 What You Will See At Buffalo Bill Dam

Our recommendation is to walk the short distance to the Buffalo Bill Dam Visitor Center and across the top of the dam.  We have stopped numerous times to walk across the dam, gaze down the canyon and up at the cliffs.  We are never disappointed!

Starting at the intersection of US 14-16-20 (Sheridan Ave) and US 14A (16th St) in downtown Cody, head west toward Yellowstone on US 14-16-20. Travel through town, 0.8 miles Buffalo Bill Center of the West, 2.8 miles Old Trail Town, 3.2 miles Rodeo Grounds – Stampede Park, 5.1 miles Hayden Bridge – Bureau of Reclamation Road (walk - see below), 5.7 miles bridge over Shoshone, 6.4 miles Precambrian-Cambrian Great Unconformity, 6.5 miles first of three tunnels, 7.3 miles exit third tunnel, 7.4 miles turn left into parking lot for Buffalo Bill Dam. The Visitor Center and the walk atop the dam is open May through September. 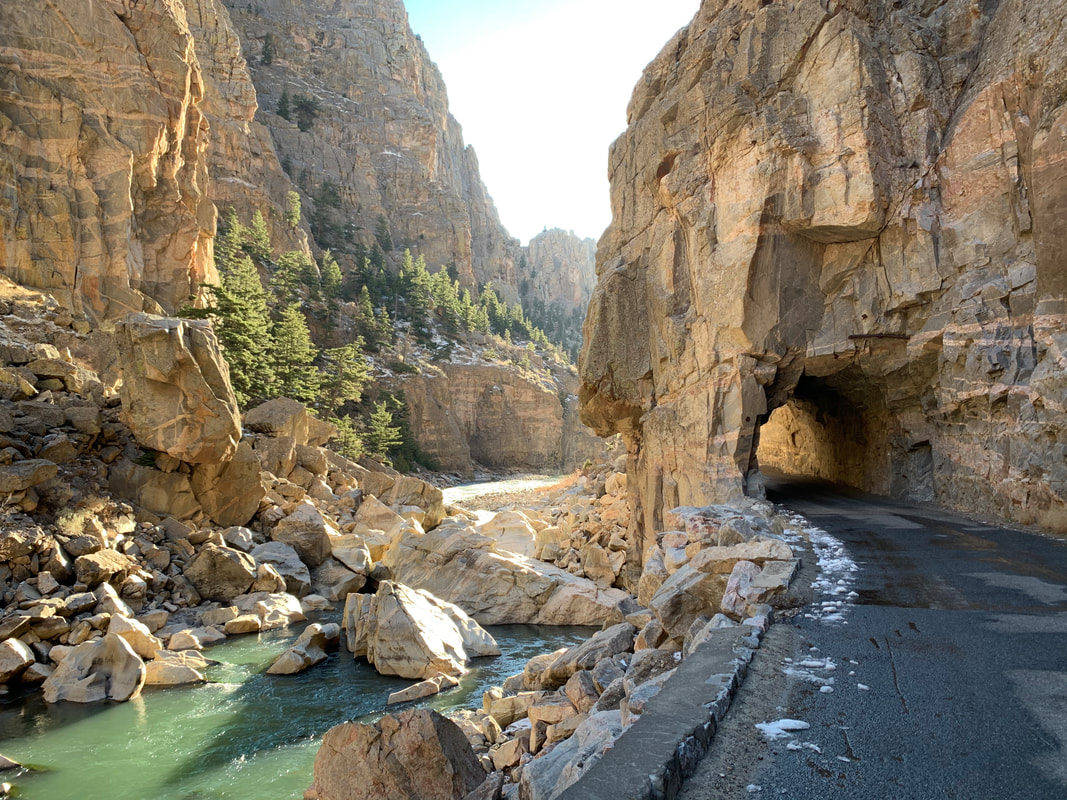 Shoshone River Canyon below Buffalo Bill Dam
Image by Mark Fisher
Certainly the most scenic walk or bike ride close to Cody is on the Bureau of Reclamation road up the Shoshone Canyon toward the dam.  Starting at the Hayden Bridge parking area, it is an out and back four mile total walk that will take about 1-1/2 hours to complete. Elevation gain is only about 200 feet.  You are adjacent to the Shoshone River and on pavement the whole way.  For some unknown reason, you will only see a handful of people enjoying this gem at any one time.  For rock climbers, there are a number of bolted climbing routes once you reach the granite.  https://rootsrated.com/cody-and-east-yellowstone-wy/climbing/lower-granite

​Starting at the intersection of US 14-16-20 (Sheridan Ave) and US 14A (16th St) in downtown Cody, head west toward Yellowstone on US 14-16-20. Travel through town, 0.8 miles Buffalo Bill Center of the West, 2.8 miles Old Trail Town, 3.2 miles Rodeo Grounds – Stampede Park, 5.1 mile turn right at Hayden Bridge Road – Bureau Reclamation Road, 5.2 mile Hayden Bridge.  Vehicle access allowed for the first mile of the road Monday through Thursday, 7:00 AM to 4:00 PM.  All other times it is pedestrian/bicycle daily use starting at Hayden Bridge.  Dogs allowed.  The walk begins at Hayden Bridge in strata of the lower Big Horn Formation which is a carbonate aquifer. After about a tenth of a mile, near the base of the resistant bedded carbonate rocks and just above the top of the soft shales of the Cambrian Gros Ventre, look in the ditch on the right for unusual greenish-grey carbonate rocks made of flat pebbles. They formed in shallow marine water where currents ripped up these clasts from a carbonate mud flat while still soft. The next mile is mostly river gravels on the right and the covered slope of Cambrian shales.  Across the river and under the highway bridge is an exposure of Cambrian shales with a small fold. The white cliffs below the top of Cedar Mountain are from top down, Pennsylvanian Tensleep Sandstone, Mississippian Madison Formation and Ordovician Big Horn Formation.  At one mile, you will reach the junction with an access bridge to the Spirit Mountain power plant (closed to the public).  At 1.1 mile on the right is an outcrop of bedded Cambrian Sandstone sitting unconfomably on the Precambrian granites (see The Great Unconformity). Across the river and behind the power plant is another good exposure of this same unconformity.  The scenery gets special as the road continues along the river another mile in Precambrian granites and metamorphics.  You will go through the first tunnel at 1.6 miles after which the road forks.  The left fork follows along the river for another 0.3 miles until you reach a second tunnel where you can go no further.  If you take the right fork after the first tunnel, the road climbs 0.4 miles and 350 vertical feet up toward the dam visitor center.  There is no access to the visitor center from this direction.