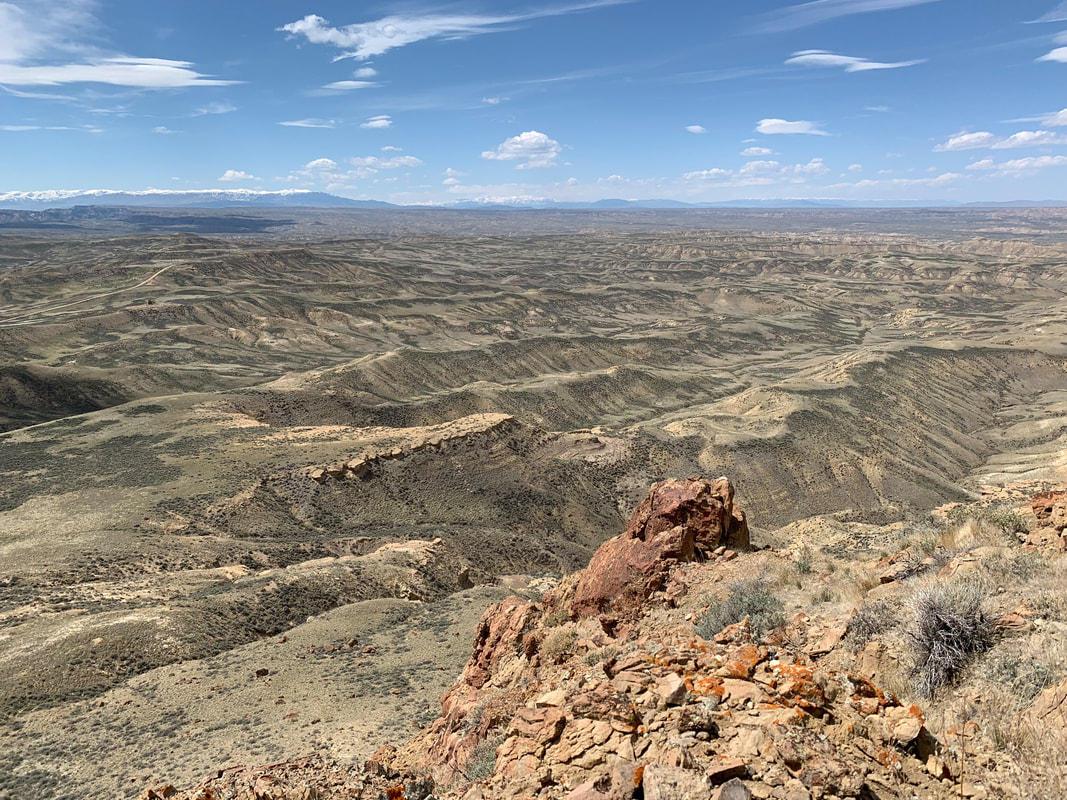 ​Tatman Mountain and Squaw Peaks are erosional remnants of Laramide Tertiary basin fill sediments in south central Bighorn Basin. Tatman Mountain is capped with Tertiary gravels that mark a former streambed of the Greybull River. The gravels helped preserve the large terrace from erosion (see https://www.geowyo.com/polecat-bench--petm.html). The Squaw Peaks have resistant Eocene volcanic rocks lying on their top that helped preserve these peaks from erosion. Tatman Mountain rises about 1,300 feet above the valleys and forms a drainage divide between the Greybull River (north) and Fifteen Mile Creek (south). The Squaw Peaks are 800 to 1,200 feet above the valley floors and separate Fifteen Mile Creek (north) from Gooseberry Creek (south). 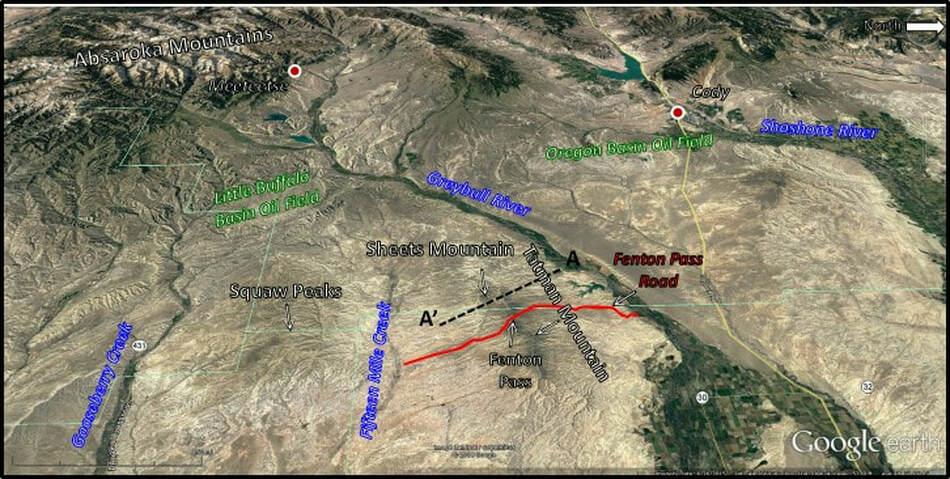 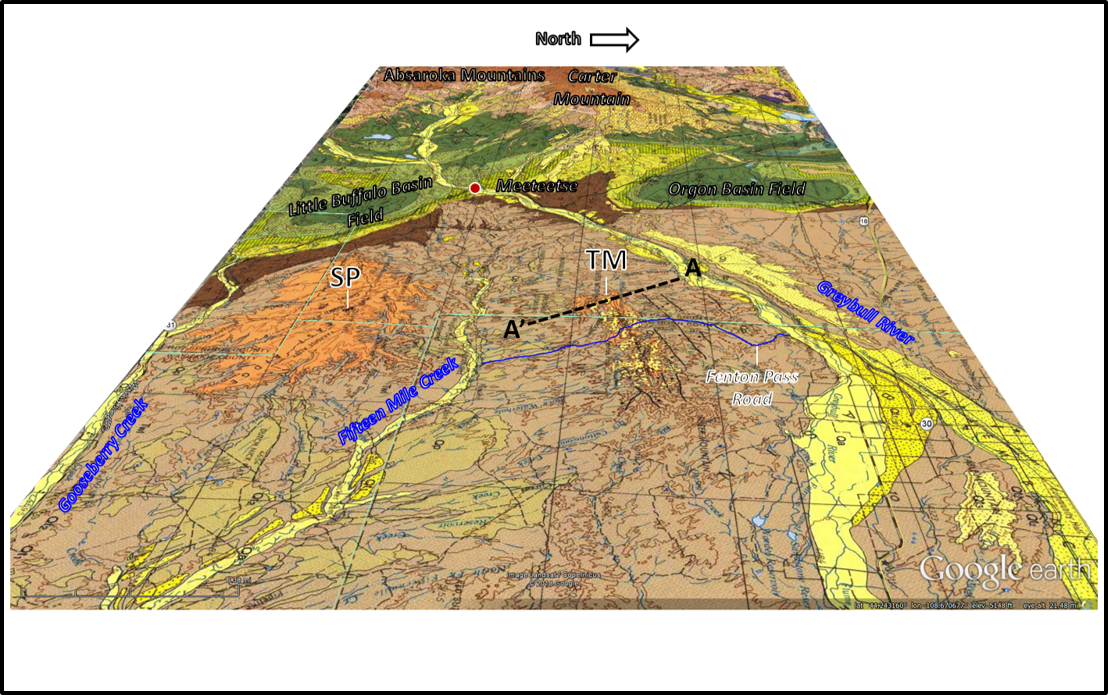 West aerial view of Tatman Mountain-Squaw Peaks area. Two largest exposures of the Tatman Formation shown in light golden tan, Willwood Formation in light brown, Fort Union Formation in dark brown and Quaternary in yellow. Fenton Pass Road shown by blue line. Cross section AA’ location shown by black dashed line. Abbreviations: SP, Squaw Peaks; TM, Tatman Mountain.
Image: Love, J.D., and Christiansen, A.C., 1985, Geologic map of Wyoming: U.S. Geological Survey, scale 1:500,000.
Tatman Mountain is the type location for the Eocene Tatman Formation. The formation is present only as isolated erosional remnants. Varying from about 650 feet thick on the west edge of Tatman Mountain to 730 feet on the Sheet Mountain spur and almost 850 to 950 feet at Squaw Peaks. Scattered partial outcrops are also found to the southeast at Lysite Mountain in the Bridger Mountains (230 feet), to the southwest at Adam Weiss Peak in the Grass Greek area (50-150 feet), and the upper Greybull River area to the south of Carter Mountain (no thickness reported). The formation consists of poorly lithified, fine-grained sandstone with pelecypod and gastropod casts, and carbonaceous shales with some calcareous concretions deposited in ancient lakes and swamps in south central Bighorn Basin. Numerous Quaternary landslides of the formation are located surrounding the plateau. The Willwood Formation lies below the Tatman Formation, and the Fenton Pass Conglomerate unconformably overlies the Tatman at the type location. The general area landscape exhibits plateaus with surrounding badland topography. Arrows on the geologic map point to the two major sites of Tatman Formation deposition in a light golden tan color at Squaw Peaks (SP, left) and Tatman Mountain (TM, right). The older Willwood Formation is shown by the light tan color that encircles the Tatman Formation outcrops. The Willwood is also overlain by rocks of the Absaroka Supergroup to the west in the Absaroka Mountains area. 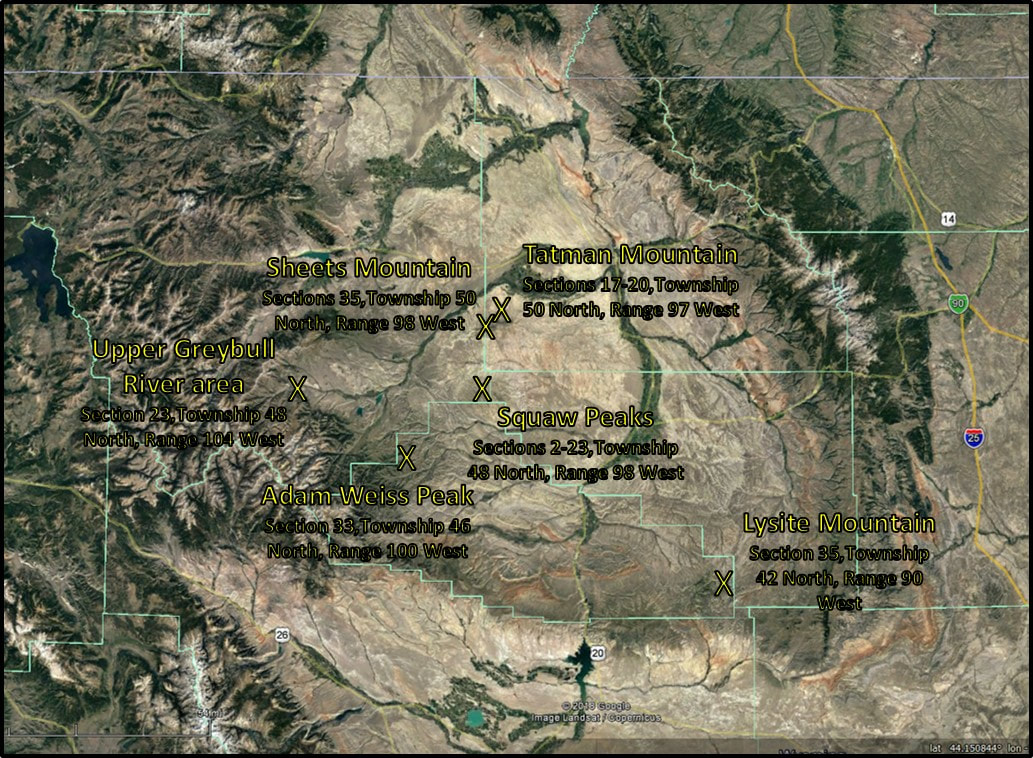 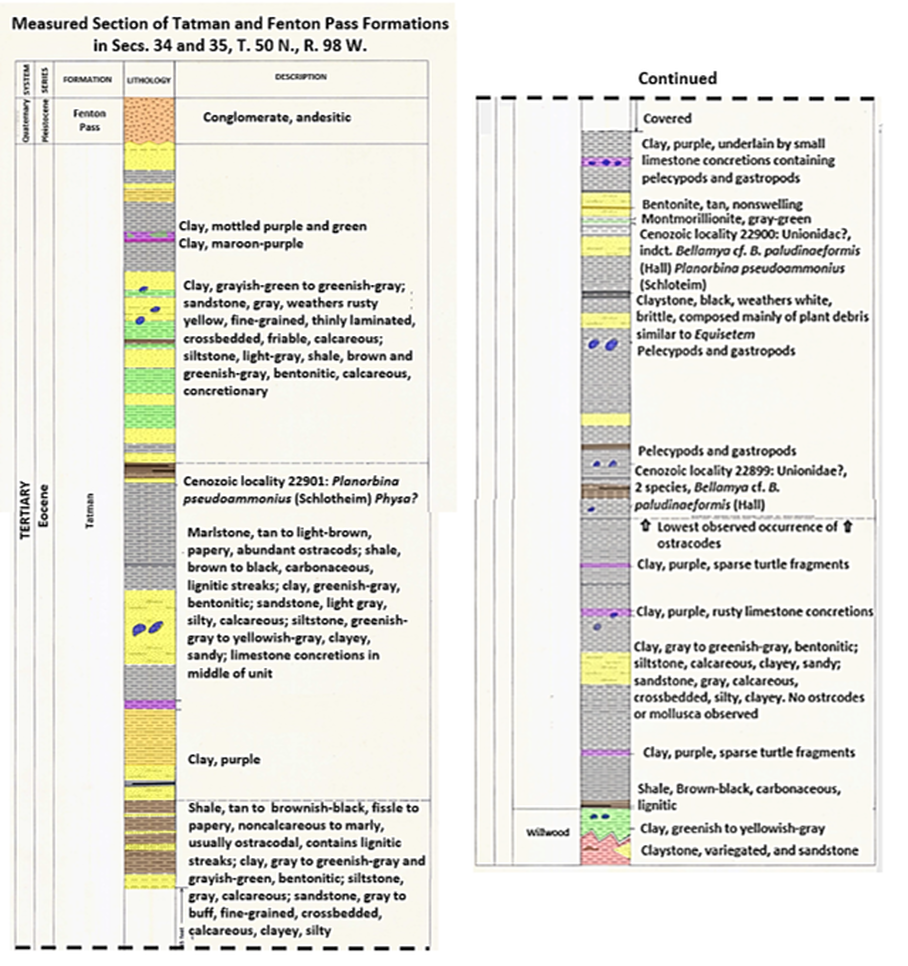 Squaw Peaks measured section. The Tatman Formation is 867 feet on the measured section.
Image: After Van Houten, F.B., 1944, Stratigraphy of the Willwood and Tatman Formations in Northwestern Wyoming: Geological Society of America Bulletin, Vol. 55, No. 2, Fig. 4, p. 207.
There is no structural component to the mountain. It is merely an erosional remnant of nearly flat lying Tertiary strata. Tertiary bed dips indicate that the Bighorn Basin structural axis is located beneath the Squaw Peaks area. At Tatman Mountain the formation dips 2 degrees southwest, at Squaw Peaks dip is 2 degrees east. The location of the Eocene lake was probably centered near Squaw Peaks with the northern margin at Tatman Mountain. Formation dips indicate this as the depositional center of the Tatman basin. The Eocene was a period of numerous lakes due to the uplift of the Rocky Mountains and formation of intermontane basins in Wyoming. The highlands supplied the basins with water and sediment from multiple directions.

Fenton Pass Road elevation profile: 15 mi from the Greybull River (north) to 15 Mile Creek (south). The route elevation profile is a good representation of Tatman Mountain topography. Elevation lines are 250 feet each with 6,000 feet at the top. The vertical lines are one mile each.
Image: Google Earth
The most complete section of Tatman Formation is found at Squaw Peaks. The formation is the main geologic unit exposed in the area. Outliers of Eocene volcanic rock cap the peaks. These volcanic rocks are 50 to 95 feet on the northwest flank and thin to about 30 feet to the southeast. They are composed of tuff, lava, and volcanoclastic units. The volcanic rocks lie nearly vertical on the Tatman Formation. 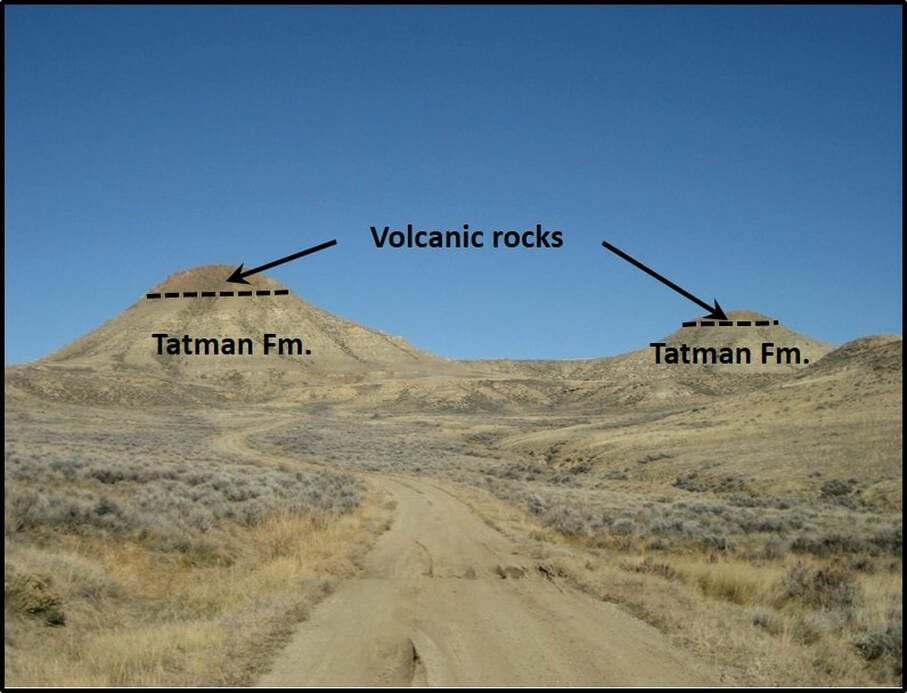 North view of the Squaw Peaks.
​Image: After musicman82, 2009: Summit Post; https://www.summitpost.org/the-squaw-teats/569589/c-569605.
Geologist David Malone and others have made a convincing argument the allochthonous volcanic rocks represent a distal outlier of the Heart Mountain Detachment. Allochthonous is a term applied to rocks which have not been formed or deposited in place, but moved in. Their conclusion was based on lithology, zircon age dating, timing and stratigraphic relationships. This would extend the limits of the Heart Mountain slide another 65 miles southeastward and the distribution area from 1,400 to 1,930 square miles. The blocks may have been transported and emplaced in a south flowing Eocene paleodrainage. 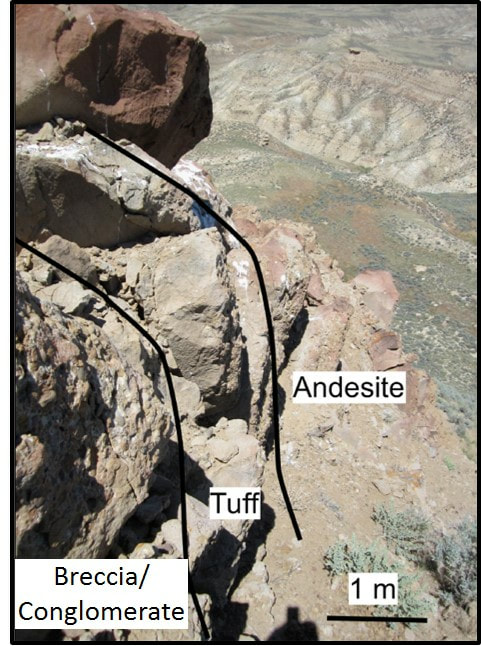 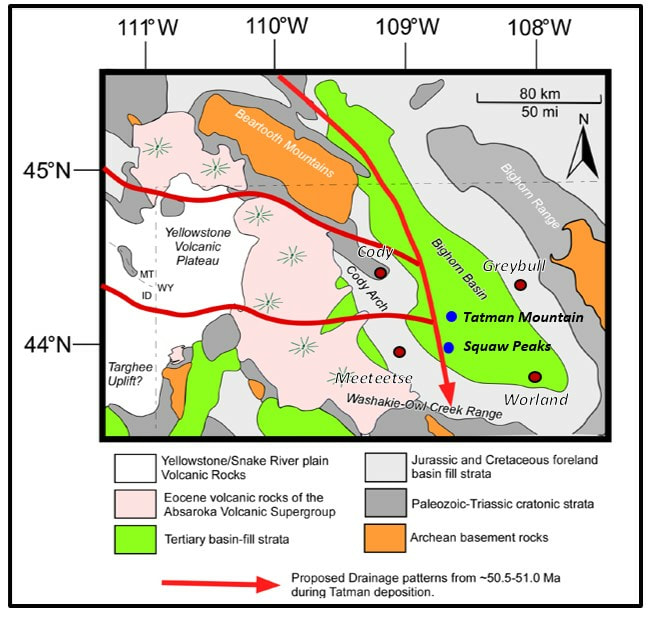 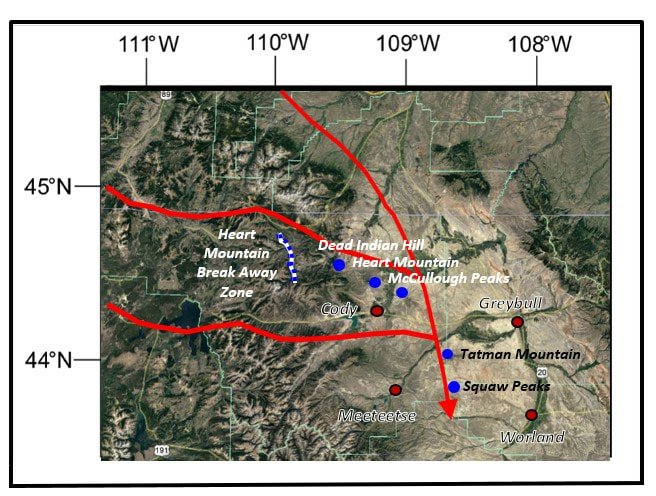 Eocene paleodrainage (50.5-51.0 million years ago), southwestern Bighorn Basin. McCullough Peaks were formerly the most distant Heart Mountain outcrop block at 55 miles from the detachment (white and blue dotted line).
Image: Top:Malone, D.H., Craddock, J.P., and Mathesin, M.G., 2014, Origin of Allochthonous Volcanic Rocks at Squaw Peaks, Wyoming: A Distal Remnant of the Heart Mountain Slide?: The Mountain Geologist Vol. 51, No. 4, Fig. 8, p. 338; https://www.researchgate.net/publication/272488514_Origin_of_Allochthonous_Volcanic_Rocks_at_Squaw_Peaks_Wyoming_A_Distal_Remnant_of_the_Heart_Mountain_Slide; Bottom: Google Earth.
The story of the Heart Mountain detachment, which occurred about 48.9 million years ago, is one that continues to evolve. The triggering mechanism, the catastrophic speed of emplacement and the immense scale of the slide is a geologic wonder that geologists have studied over 100 years. The volcanic rocks on top of Squaw Peaks tell another piece of that story.

​If you are interested in exploring the rarely visited central Bighorn Basin, a drive and hike to Squaw Peaks and Tatman Mountain would satisfy that craving. Although 4WD was not needed when visited in 2019, a high clearance vehicle would be helpful for the ruts and occasional washouts. Don’t go if the roads are wet. It can get very hot and dry in the summer, thus the prettiest time to visit is in May or June. You are on your own in these areas with minimal to no traffic and poor cell phone coverage. That is part of the attraction, so come prepared. 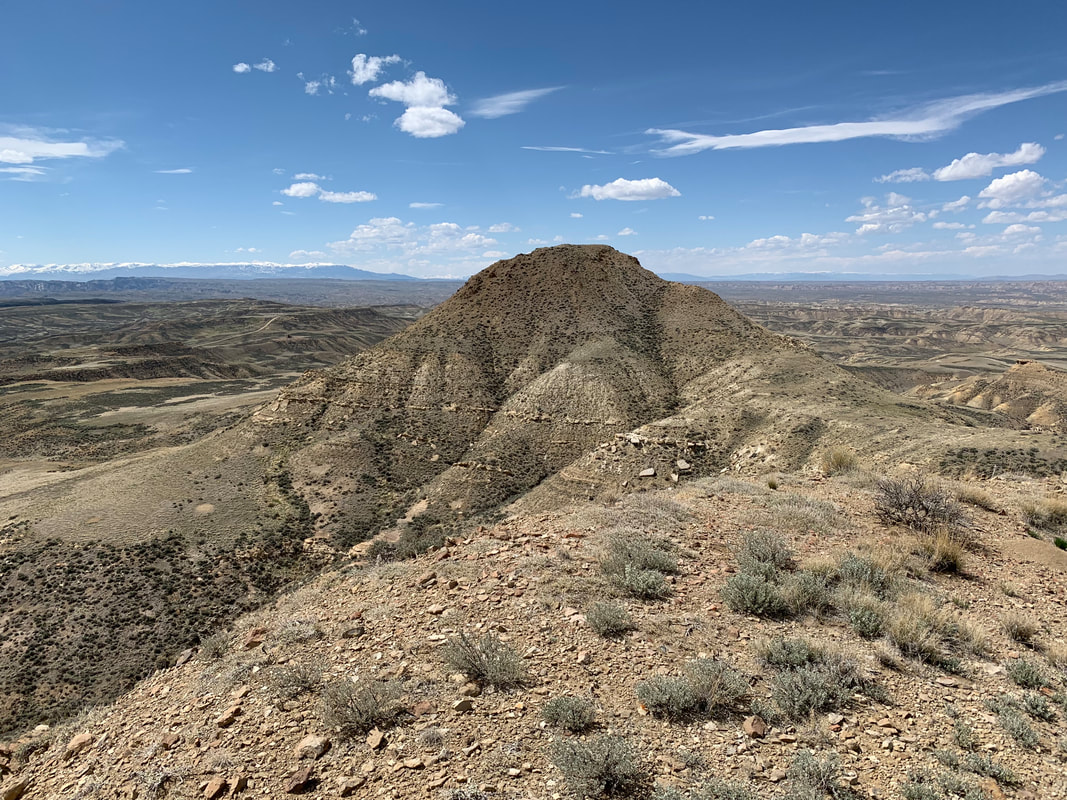 From Meeteetse to Squaw Peaks is a 22 mile drive that takes about one hour. You can make it a lollipop loop drive, so you don’t have to come back the same way. Starting in Meeteetse at the intersection of WY 120 and WY 290, drive south on WY 120.  The highway you are travelling on south of Meeteetse is built on the soft shales, siltstones, sandstones & thin coals of the Upper Cretaceous Meeteetse Formation with the thick Cretaceous Measverde Sandstones on ridges to your right (west) and the thick Cretaceous Lance Sandstones on ridges to your left (east).  At 9.3 miles turn left (east) on gravel & dirt road (dirt road is immediately opposite the turn off for Little Buffalo Basin), as you go east the road quickly moves up stratigraphic section through the Lance, Fort Union, Willwood, and into the Tatman, 15.2 miles road crosses ridge with great views of Tatman Mountain to the north, Squaw Peaks to the east, cell/radio towers to immediate right, 16.8 miles cross cattle guard, 19.2 miles turn right at road junction (Whistle Berry Hill Road is straight), 19.8 miles cattle guard and power lines, 21.7 miles arrive at Squaw Peaks, turn left on dirt two-track, 21.8 miles park at fence, note prairie dog holes.

About a one hour and one-mile hike from this point will get you to the top of both peaks and back to your vehicle. The vertical climb to the top of West Squaw Peak is about 300 feet and the East Squaw Peak is about 100 feet above the flats separating the two peaks.  Nice 360-degree views. This is all BLM public land. There are fossil pelecypods and gastropods in Tatman Formation sandstone just below the flats that separate the two peaks. Two miles west of Squaw Peaks is the one well abandoned & reclaimed gas field, Seller Draw (SE SW Section 21, T48N R98W). This field is interesting for several reasons: 1) it is the deepest production in the Bighorn Basin with a completion in a Cretaceous Muddy fluvial channel sandstone from 19,580 to 19,610 feet. Cumulative Muddy production is 3.4 BCF of gas, 2) the well was drilled in the structurally deepest part of the Bighorn Basin to a total depth of 23,081 feet, and 3) the last operator, Bill Barrett Corporation shot a 3D seismic survey over the field and interpreted the local structure resulted from an ancient meteor impact. Now that is cool and fairly rare!
​
Return to Meeteetse on a different and smoother route, 21.8 miles start return, 22.0 turn left off two-track onto dirt/gravel road, 22.5 miles turn right at road junction on Murphy Draw Road, travel on Murphy Draw Road down crest of gentle ridge, 30.3 miles turn right (west) at road junction onto paved WY 431, 36.0 miles turn right (north) at road junction onto paved WY 120, 46.3 miles pass the dirt road turnoff on right to Squaw Peaks and continue to Meeteetse, 55.6 miles arrive at junction WY 120 & 290 in Meeteetse. 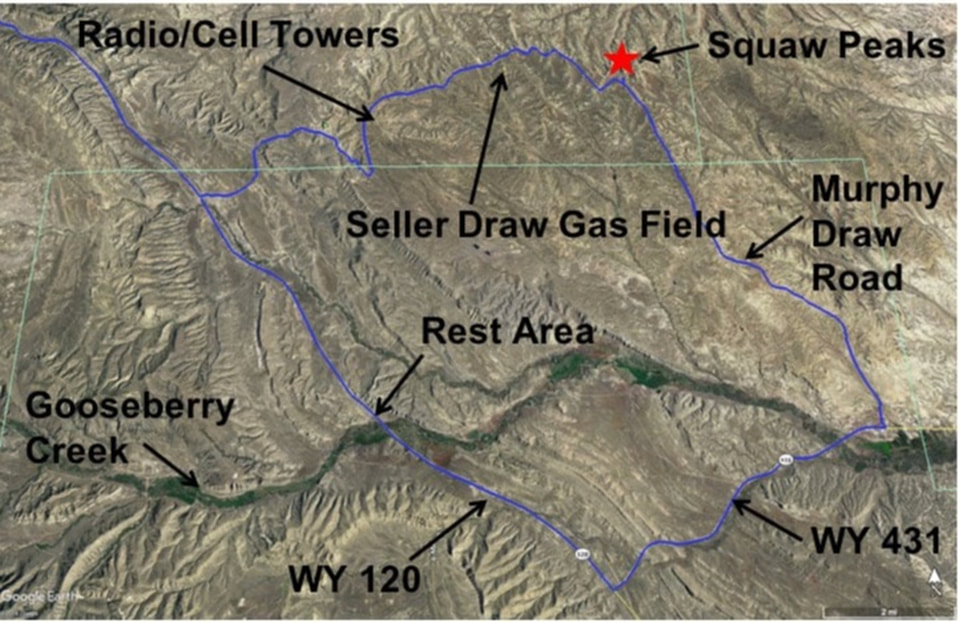 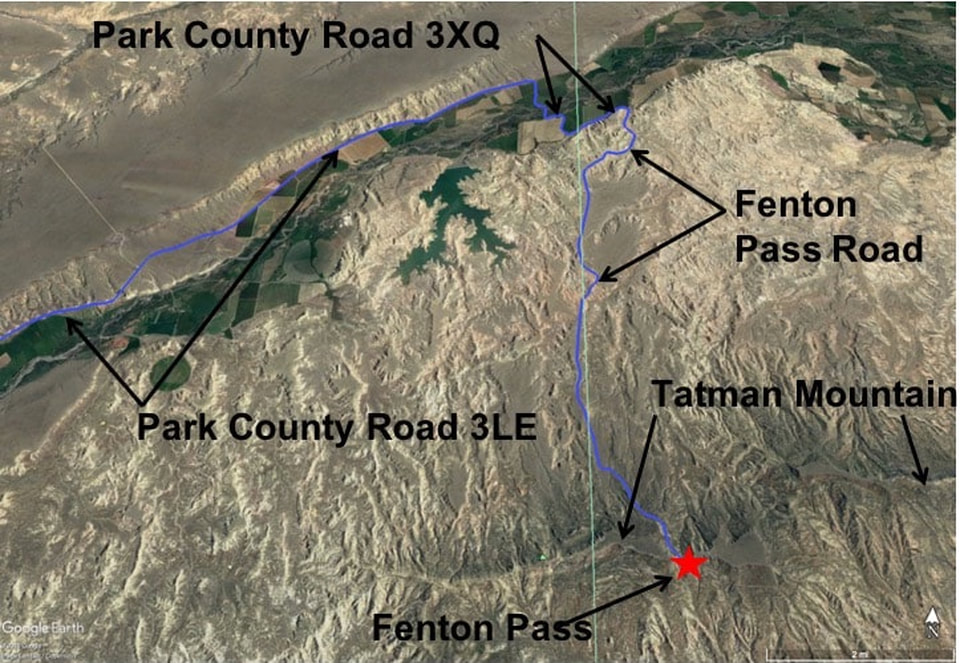 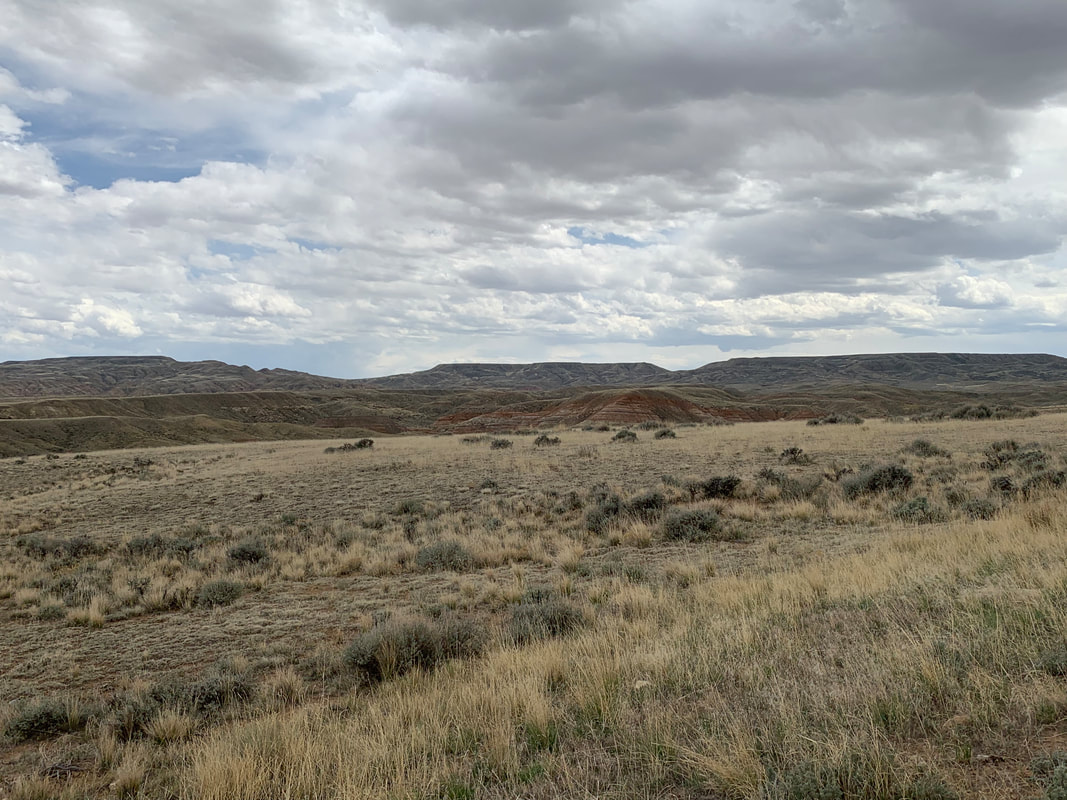