​Textbook examples of Laramide folds on southeast end of the Sweetwater Arch.
The Freezeout Hills (mountains) are located about ten miles north-northwest of the town of Medicine Bow at the southeast plunge of the Sweetwater Arch in central Wyoming. Phanerozoic sedimentary rocks are folded into two northeast trending anticlines (arch shape fold with the oldest rocks in the core). Unlike the other mountains along this trend, Precambrian basement rocks remain buried here.
​
The Late Jurassic Morrison Formation (156.2 to 146.8 million years ago) holds the most dinosaur bones discovered in North America. Thirty seven genera of dinosaur have been found in the formation. 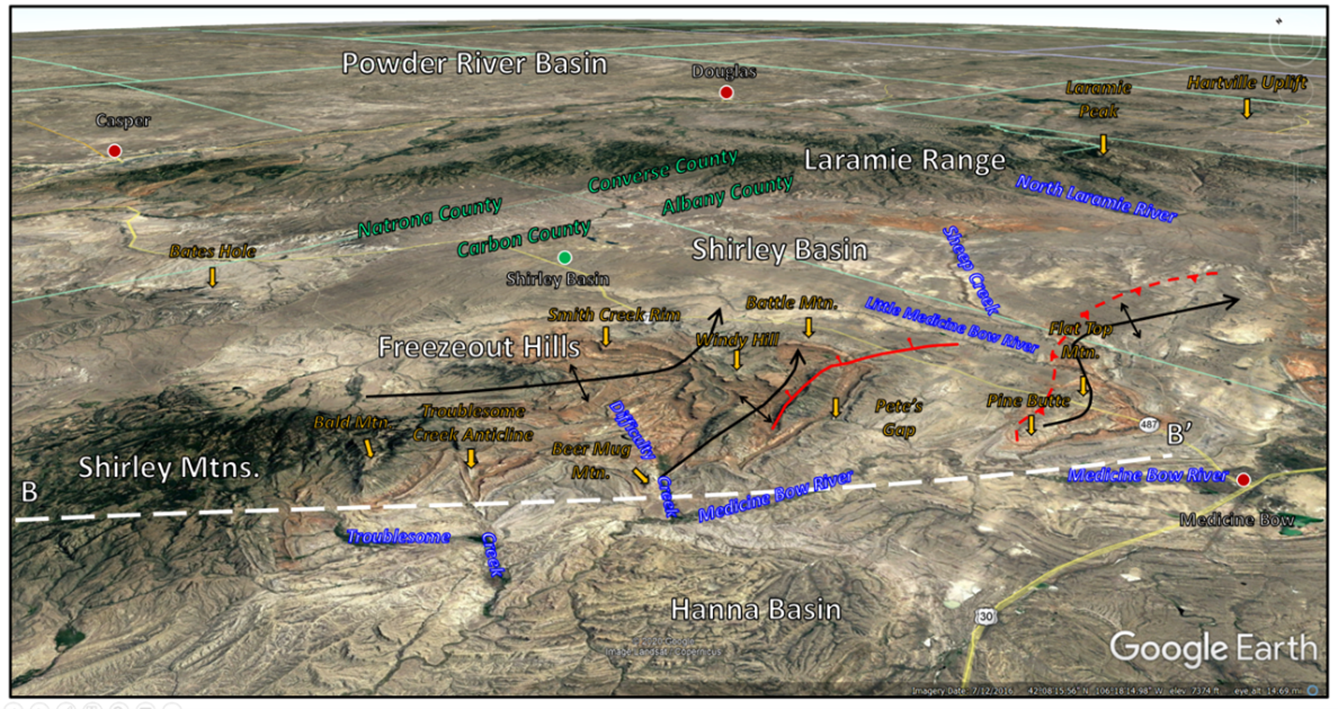 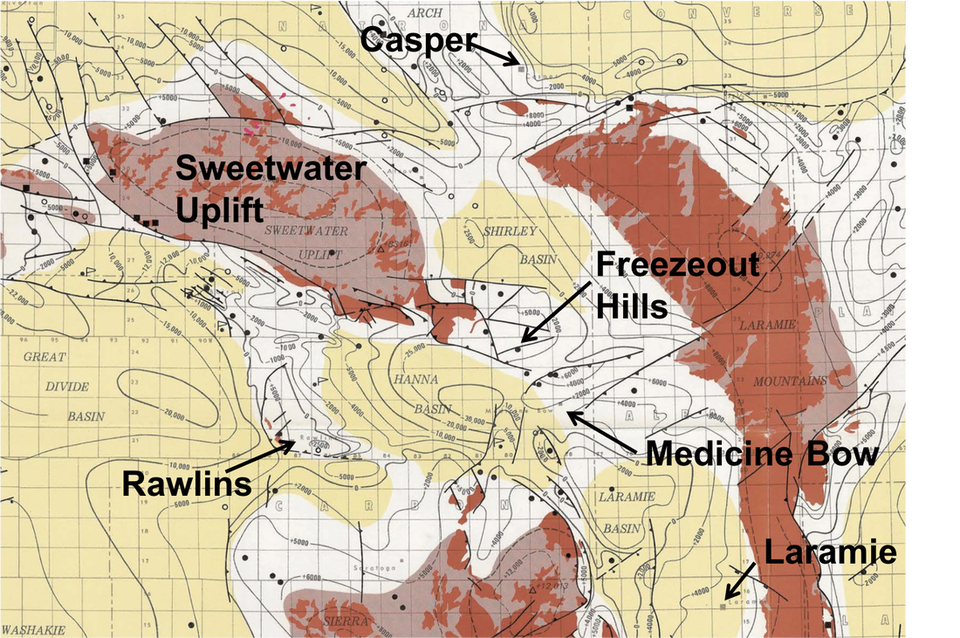 Wyoming is famous as a dinosaur graveyard. The discovery of a dinosaur boneyard at Como Buff in 1877 ignited the territory’s great dinosaur rush. The fossil-collecting rivalry between Marsh and Cope came to be known as the “bone war.” In 1898, William Reed discovered a thigh bone at the foot of the Freezeout Hills. A highly inaccurate New York newspaper article of the find caught Andrew Carnegie’s coveted attention and thus Wyoming’s turn-of-the-20th-century “museum bone rush” began. Chief rivals were the American Museum of Natural History (founded in 1869 in New York City), the Carnegie Museum (founded in 1896 in Pittsburgh), and the Field Colombian Museum (founded in 1893 in Chicago).

In 1898, the Union Pacific Railroad issued invitations to geologists and paleontologists from universities, colleges, and museums around the country to study fossils in Wyoming. The field trip was under the leadership of University of Wyoming Geology Professor Wilber Knight. Approximately 100 scientists took part in the 40 day expedition. Some of the longer camps were in the Freezeout Hills area. 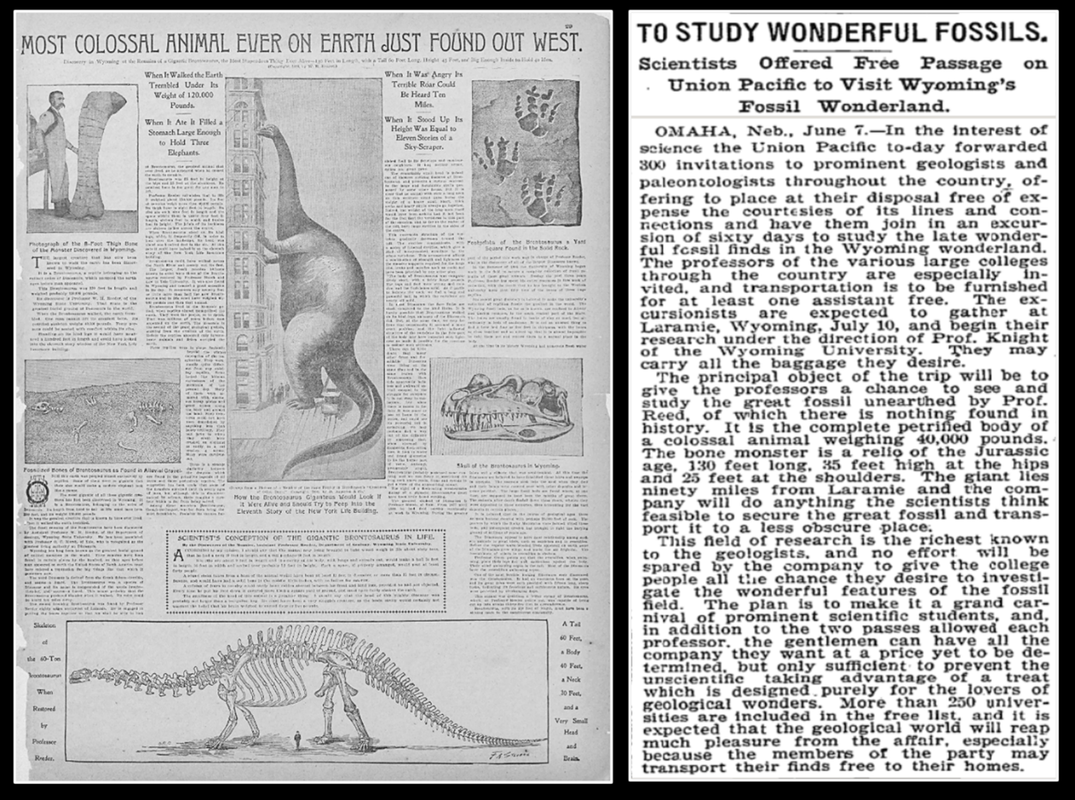 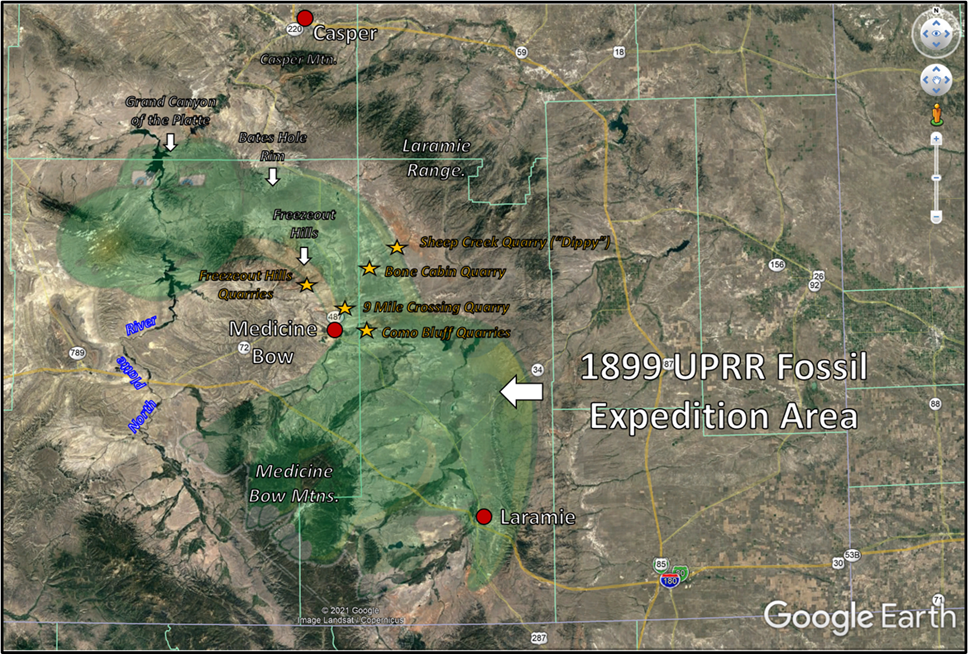 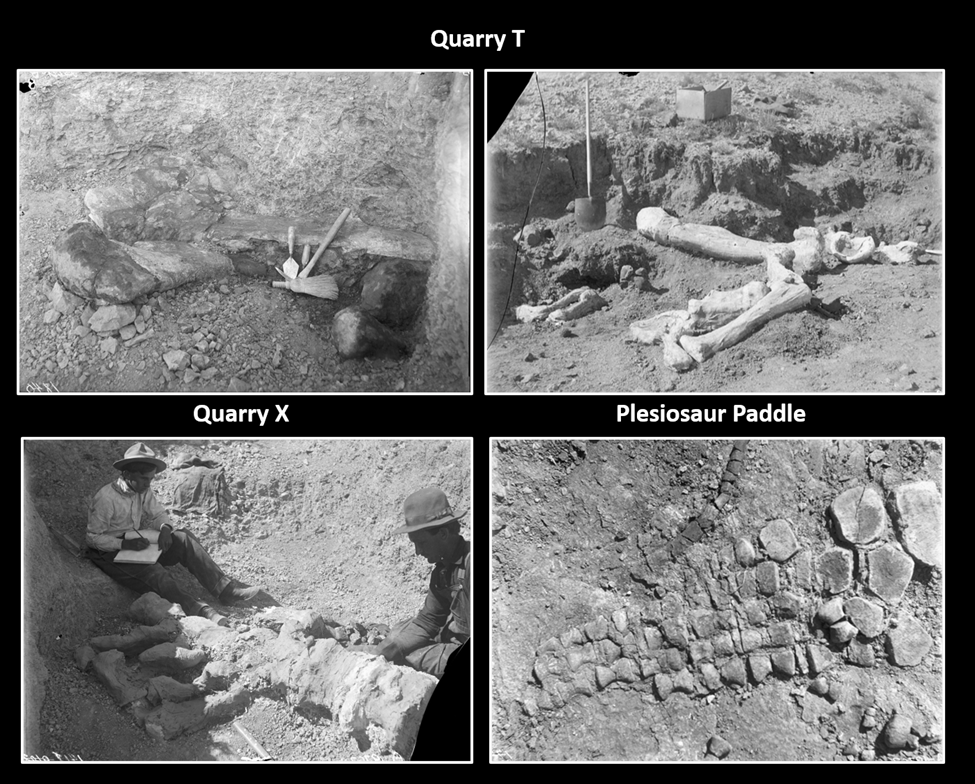 Fossils, in place, found at Freezeout Hills Quarries.
Image: Samuel H. Knight Papers, American Heritage Center Photos (counterclockwise from upper left) AH400044_00012, AH 400044_00018, AH 400044_00019, AH400044_02042; https://digitalcollections.uwyo.edu/luna/servlet/view/search?search=SUBMIT&q=freezeout+hills&dateRangeStart=&dateRangeEnd=&QuickSearchA=QuickSearchA.
The origin of the Freezeout name is attributed to two stories. The first involves a letter carrier who was caught in a winter storm and inscribed on a rock “froze out.” The second arises from an English hunting party that were “froze out” in the 1870s. Both acknowledge the bitter winter weather in the area. The area lies along the Wyoming wind corridor where winter wind chills can reach minus 45 degrees Fahrenheit and frostbite could occur in about 10 minutes. 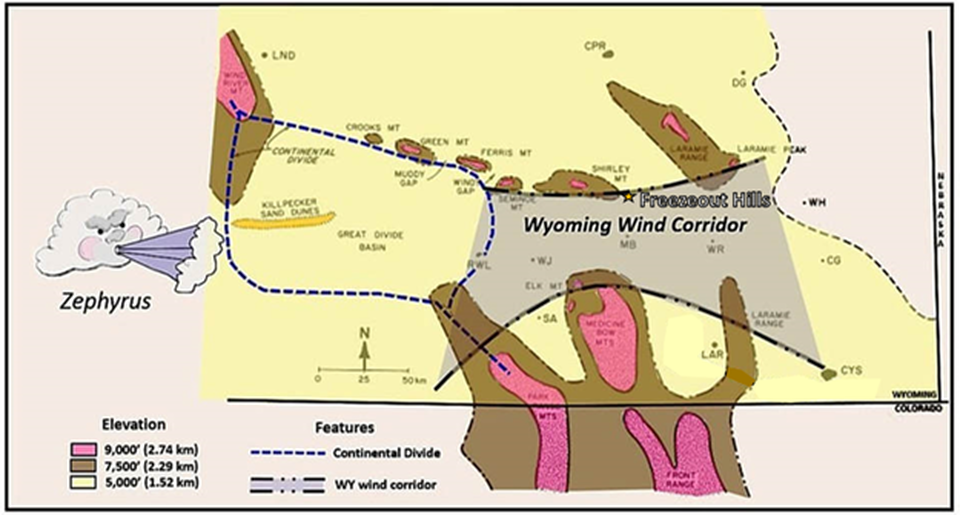 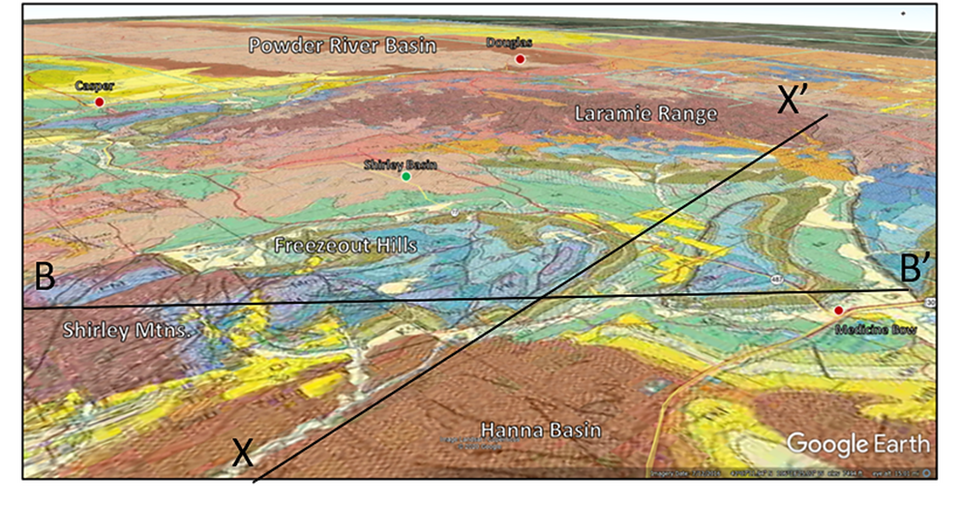 Structural cross section B to B’ of Freezeout Hills area. Shirley Mountains on left (northwest) and Flat Top Anticline near the town of Medicine Bow on right edge (southeast). Location of cross section on geology map above.
Image: Image: After Lillegraven, J.A. and Snoke, A.W., 1996, A new look at the Laramide orogeny in the Seminoe and Shirley mountains, Freezeout Hills, and Hanna Basin, south-central Wyoming: Wyoming State Geological Survey, Public Information Circular No. 36, Fig. 26, p. 34; https://www.wsgs.wyo.gov/products/wsgs-1996-pic-36.pdf
The major structural features in the region are the Emigrant Trail Thrust, Wyoming Lineament, and Cheyenne Belt. The Emigrant Trail thrust system is a northeast dipping series of faults that  bounds the Sweetwater Arch (Granite Mountains) along the southwest side. This system extends southeastward and includes the Seminoe and Shirley Mountain Thrusts. The Sweetwater Arch was uplifted and transported to the southwest during Laramide tectonism 70 million years ago along these faults.

The Wyoming Lineament is a zone of deformation oriented N50 to 60 degrees E across the area located just southeast of the Freezeout Hills.
​
The Cheyenne Belt is an ancient Precambrian suture trending N50 to 55 degrees E between the Archean Wyoming Province and the Proterozoic Colorado island arcs. Southward subduction beneath the volcanic arcs of Colorado caused the collision with the Wyoming craton (1.75 billion years ago). Deformation, regional metamorphism, and the suture developed because of the continent-arc collision. 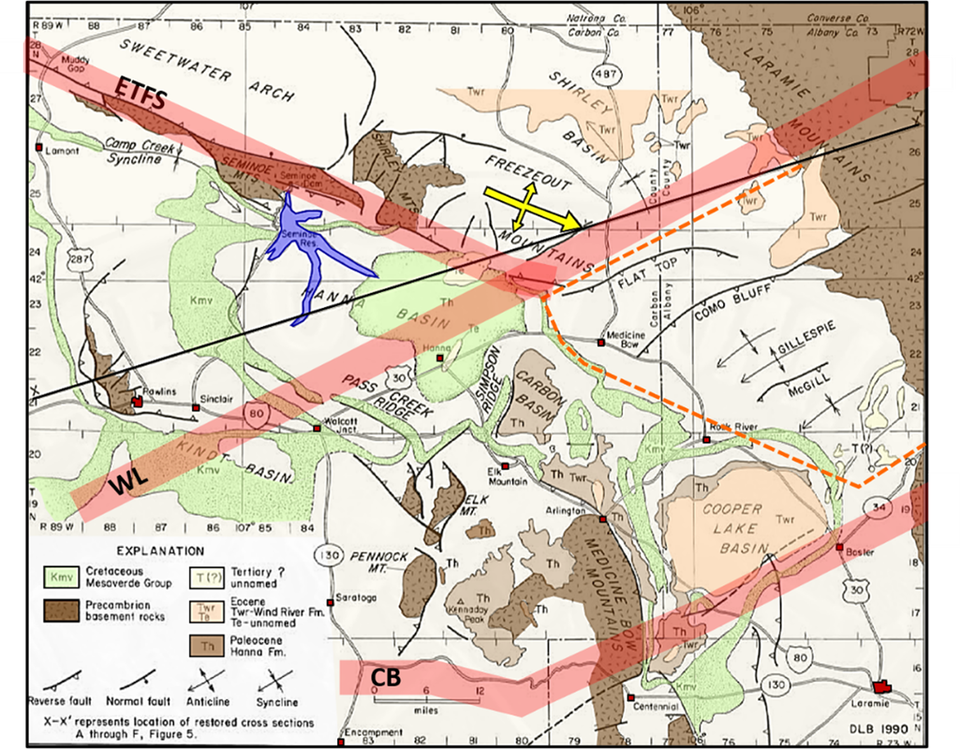 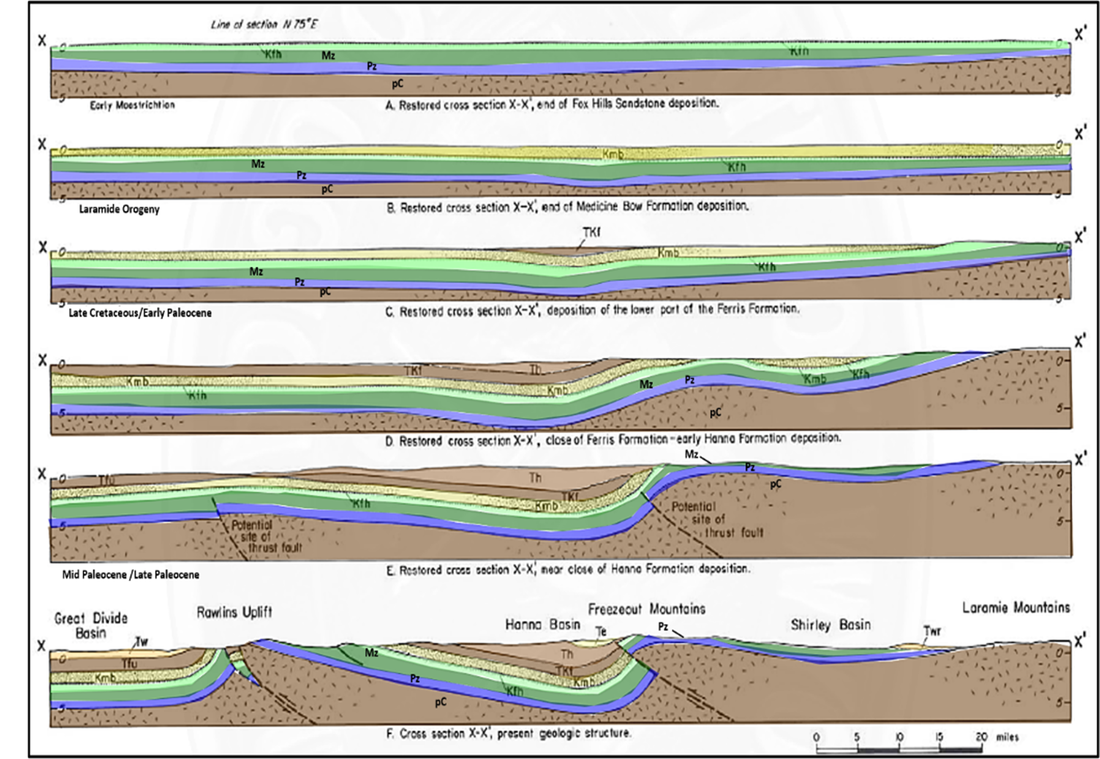 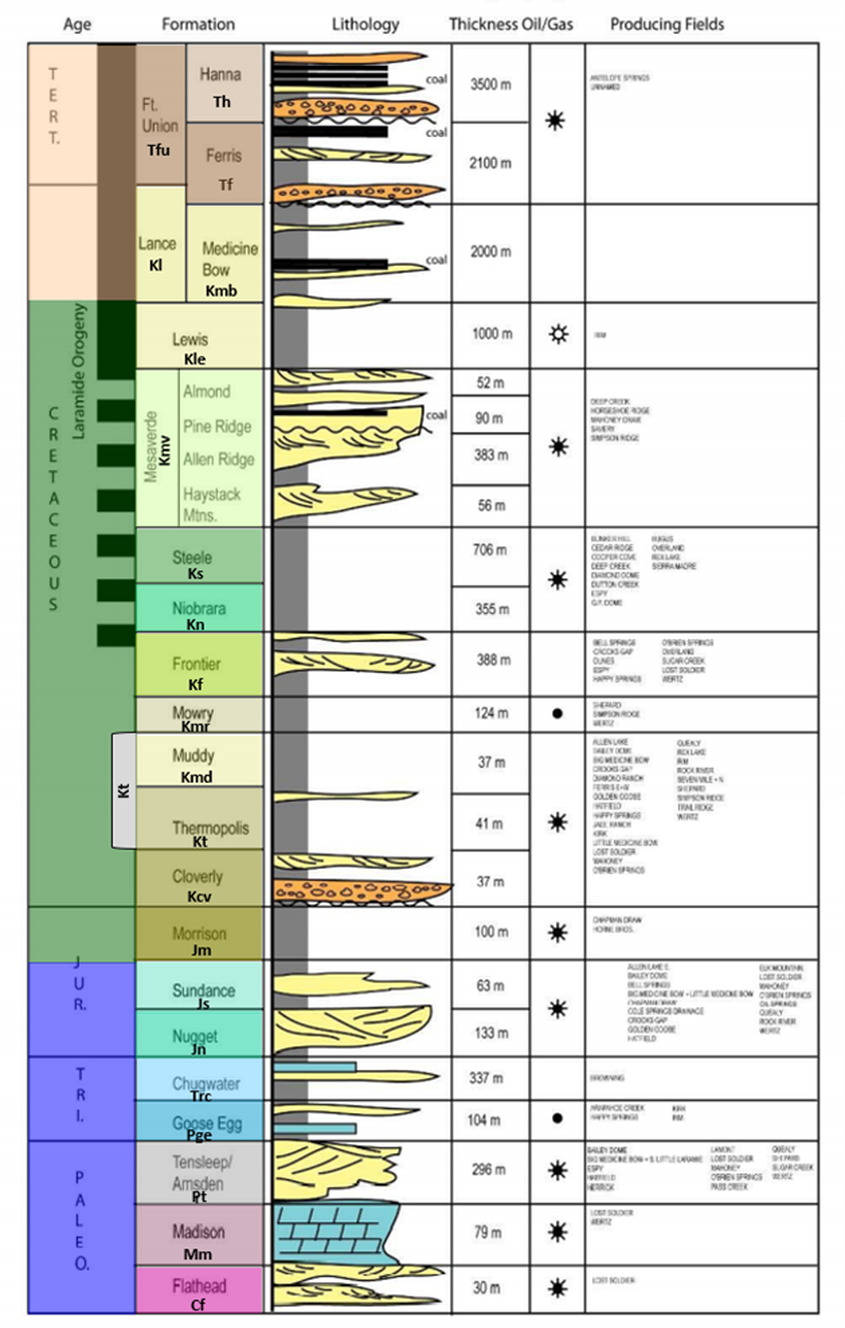 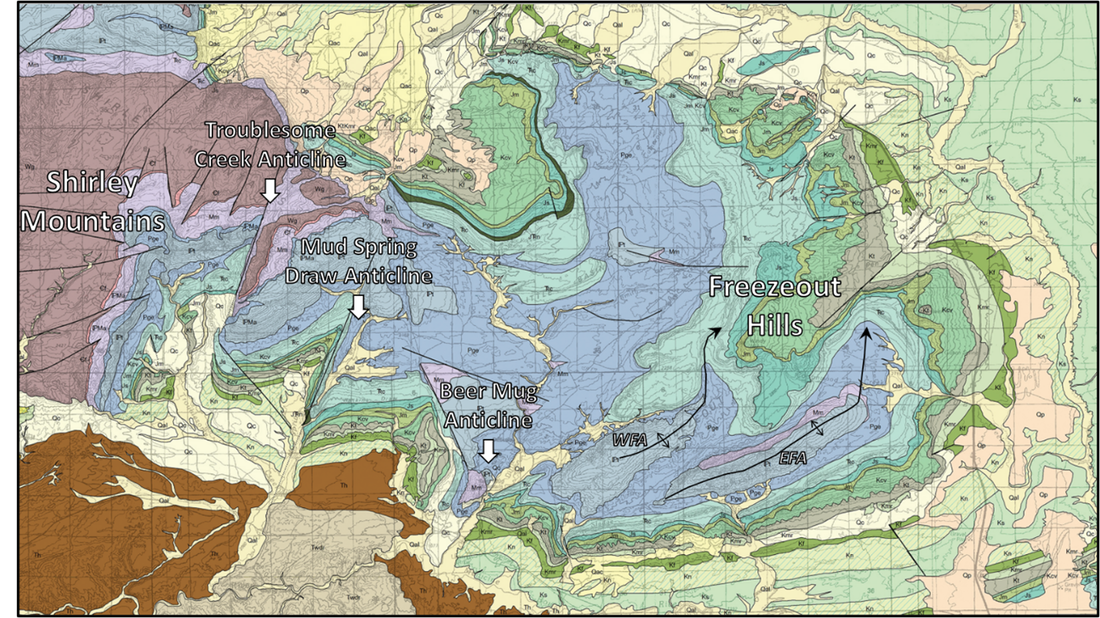 Beer Mug anticline at the southwest margin of the uplift is a classic geology textbook structure. The asymmetric structure has Tensleep Sandstone exposed in the core of the fold. The fold is cut on the southern end by a right lateral oblique fault (Indian Spring fault). The fold on the southern side is called the Ellis Ranch anticline.

Aerial view of Beer Mug Anticline (left) and generalized geology on topographic map (right). At the southern margin of the structure is the oblique slip Indian Spring fault (splay of the Shirley thrust fault). The Ellis Ranch anticline is on the footwall or downthrown side of the fault.
Image: Cooper, S.P. and Lorenz, J.C., 2007-2010, Tensleep Formation Fracture Study Compendium: Enhanced Oil Recovery Institute, Fig. on p. 230; https://www.eoriwyoming.org/library/tensleep-formation-fracture-study-compendium-2007. 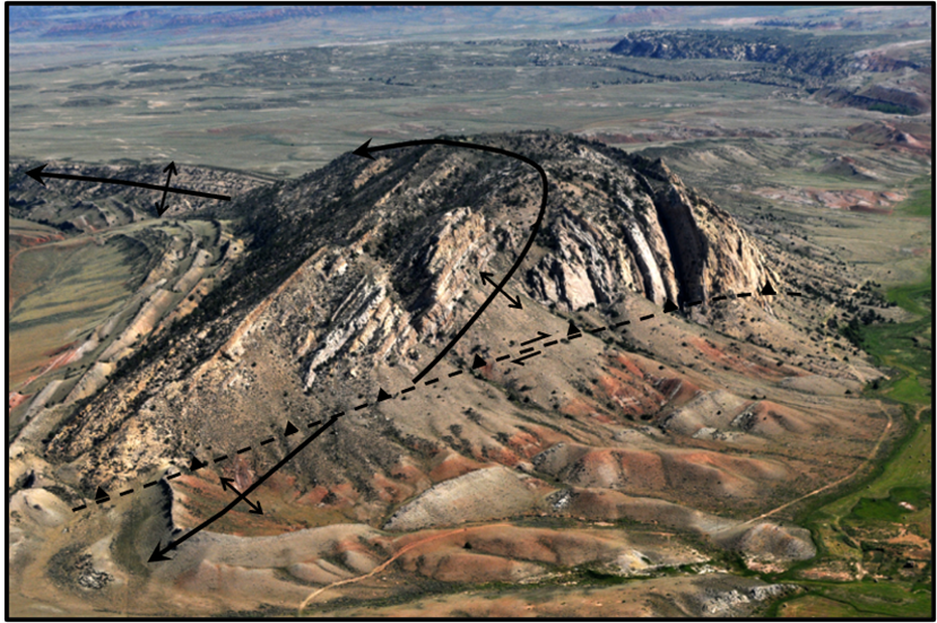 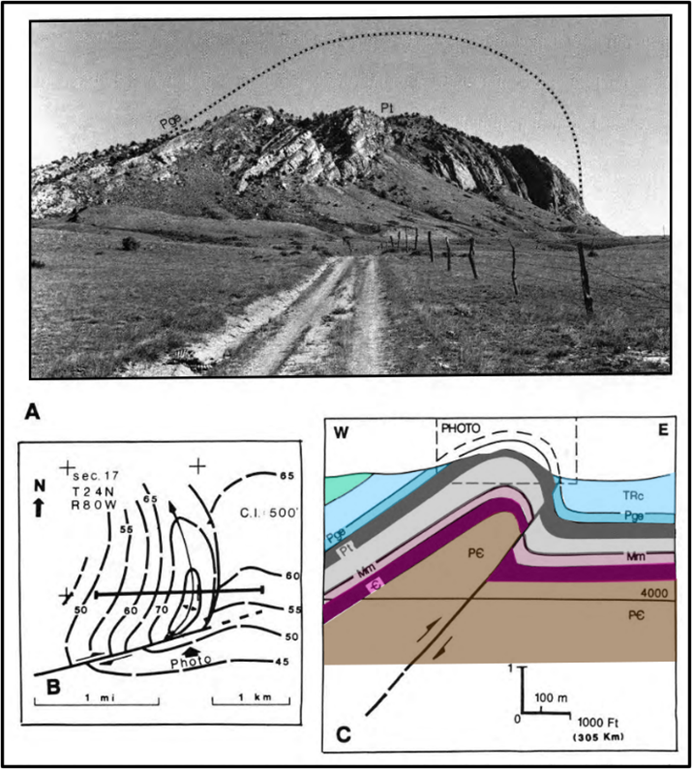 Mud Spring Draw anticline is 4.5 miles northwest of the Beer Mug structure. The anticline trends N26 degrees E and is fault bound on the tightly folded west flank. The Shirley Mountains lie two miles to the west. Bald Mountain is a portion of the large recumbent Troublesome Creek anticline at the southeast margin of the Shirley Mountains. 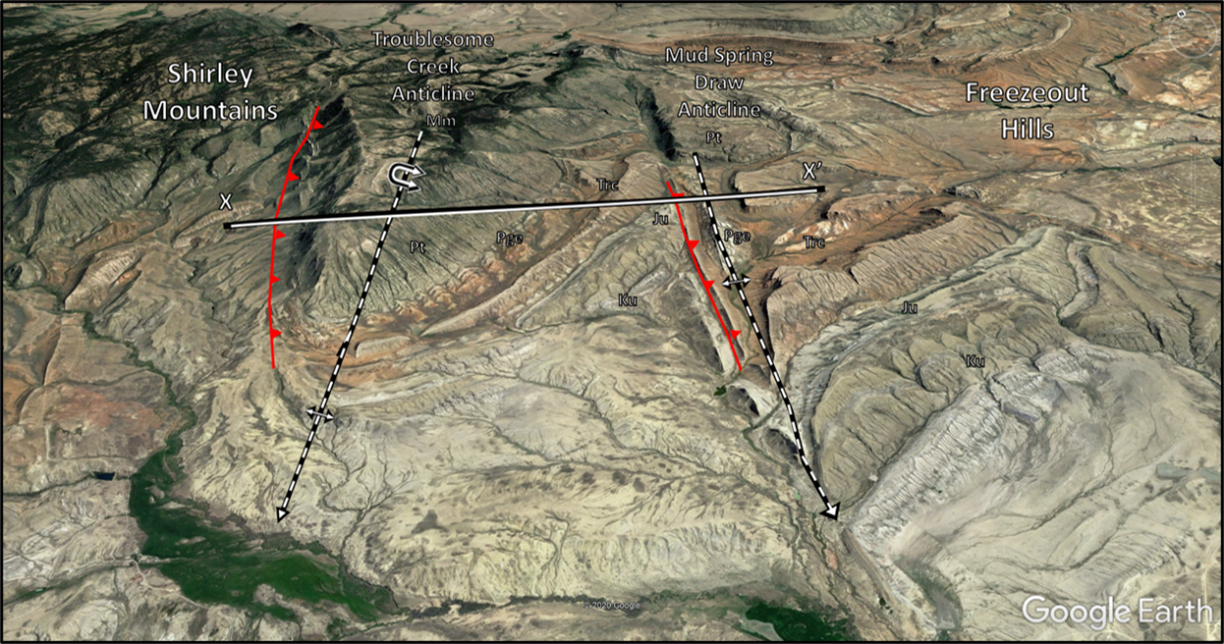 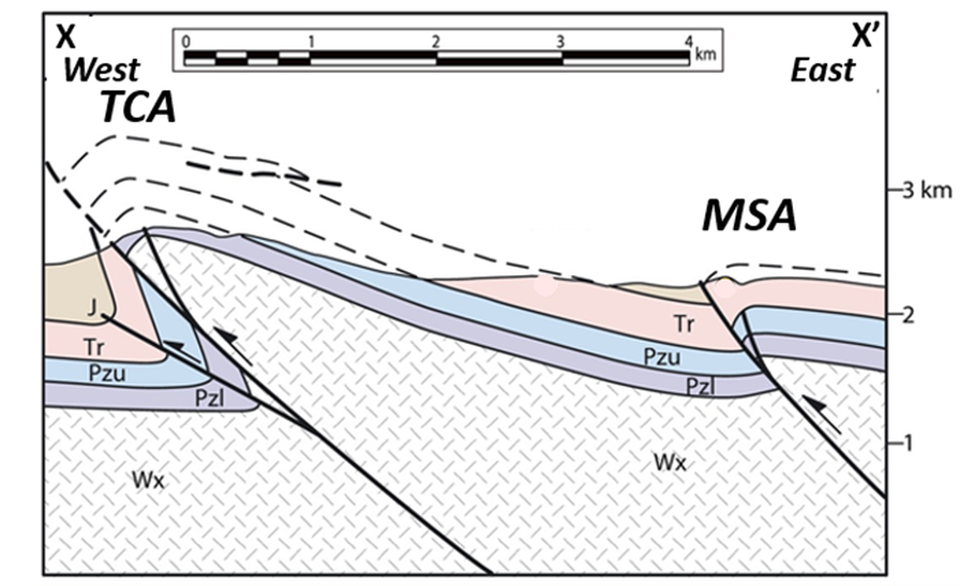