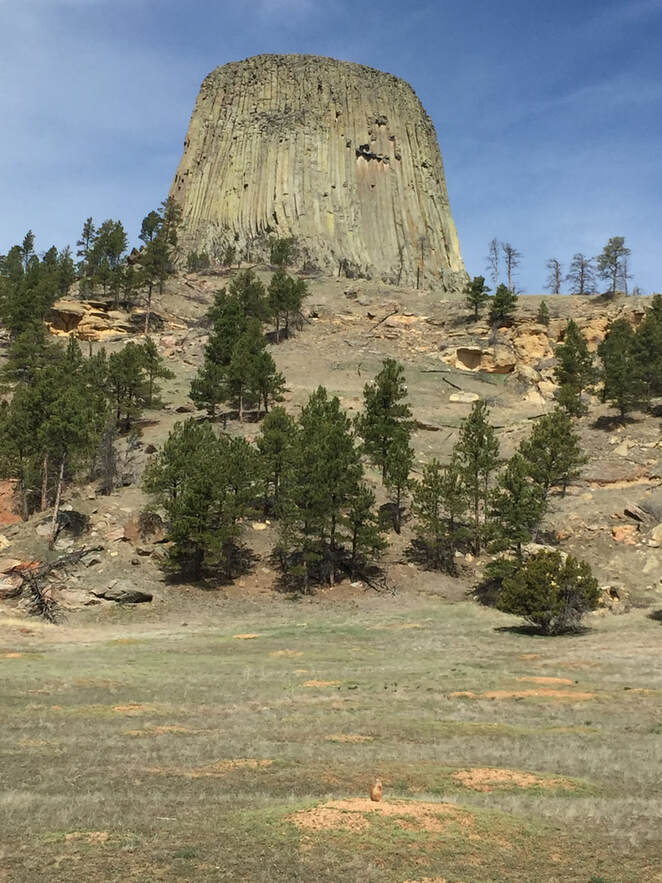 Rising 1,267 feet above the Belle Fourche river in the Black Hills prairie is a rock monument with many names. The U.S. Government designated the feature as Devils Tower since an interpreter on Colonel Dodge’s 1875 expedition mistranslated an Indian name to be “Bad God’s Tower.” Many of the Plains Indian names and origin legends refer to a giant bear, and they all hold the ground to be sacred. About 500,000 visitors come each year to view the inspiring landscape. Annually about 5,000 to 6,000 climbers come to scale 867 feet up its columns to the top at 5,112 feet above sea level. Only about two thirds of the climbers make it. In 1977, Steven Spielberg, used it as the site for a movie about the first human-alien contact. President Theodore Roosevelt extended the American Antiquities Act by making the feature the first national monument in 1906. 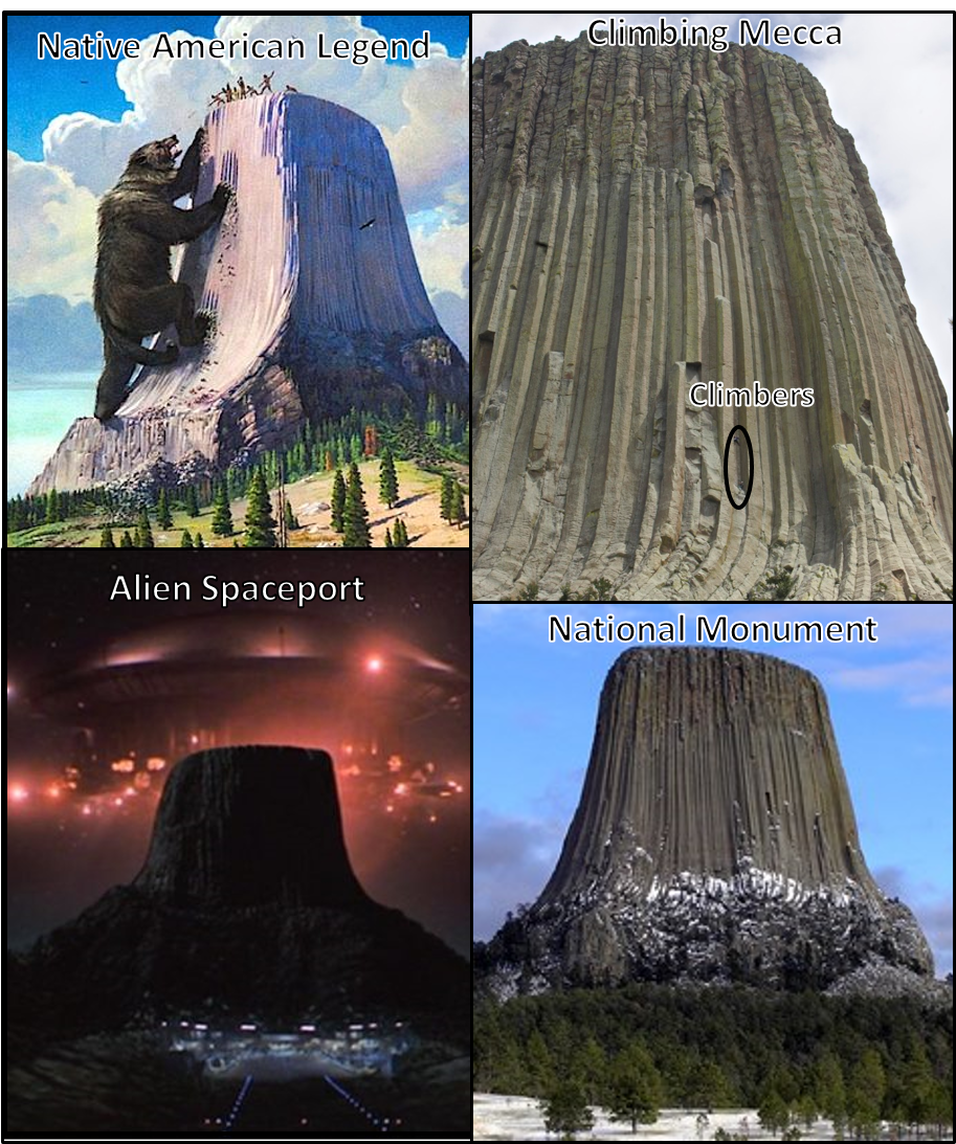 Visions of Devils Tower.
Image: Native American: https://www.nationalparkstraveler.org/2014/06/road-national-park-system-theres-cold-those-hills25253; Climbers: http://climb4kc.org/events/devils-tower-climb/; Film: https://wallpapers.place/ufo-wallpaper-wide-hd/; National Monument: https://www.nps.gov/deto/index.htm
At the time of the American Revolutionary War in 1776, the Lakota defeated the Cheyenne and took over the Black Hills as their new homeland. By the second Laramie Treaty of 1868, the U.S. government established the Great Sioux Reservation that recognized the Black Hills as Sioux land in perpetuity. Article II of the treaty exempted white people from settlement in the area for all time:

“… the United States now solemnly agrees that no persons, except those herein designated and authorized so to do, and except such officers, agents, and employees of the government as may be authorized to enter upon Indian reservations in discharge of duties enjoined by law, shall ever be permitted to pass over, settle upon, or reside in the territory described in this article, or in such territory as may be added to this reservation for the use of said Indians …”

Four years later the Secretary of Interior began to have second thoughts that the Sioux got too much out of the treaty. Besides there may be untapped natural resources and mineral wealth in the Black Hills (Delano letter, 1872). Lieutenant Colonel Custer was dispatched on an expedition to explore the region and assess sites for future military outposts in 1874. He found gold, and the prospectors rushed into the hills. An editorial in the Yankton and Dakotian newspaper summarized the 19th century view of the Lakota, the 1868 Treaty and the Black Hills gold discovery:

“This abominable compact is now pleaded as a barrier to the improvement and development of one of the richest and most fertile regions in America.  What shall be done with these Indian dogs in our manger? They will not dig gold or let others do it.  They are too lazy and too much like mere animals to cultivate the fertile soil, mine the coal, develop the salt mines, bore the petroleum wells, or wash the gold.”

The result of these attitudes was the year-long Great Sioux War (Feb.1876-Feb. 1877) and the demise of Custer and the troopers of the Seventh Calvary he led into the valley of the Little Big Horn. 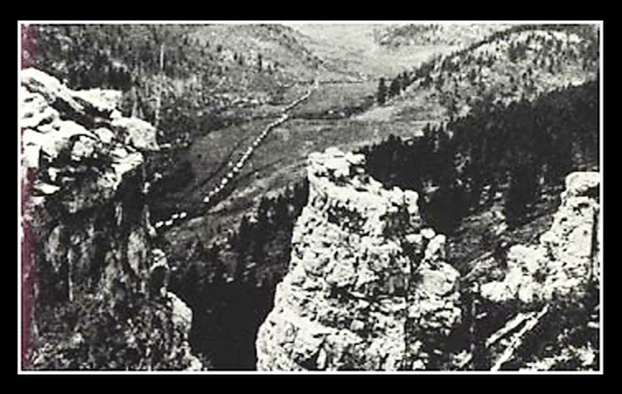 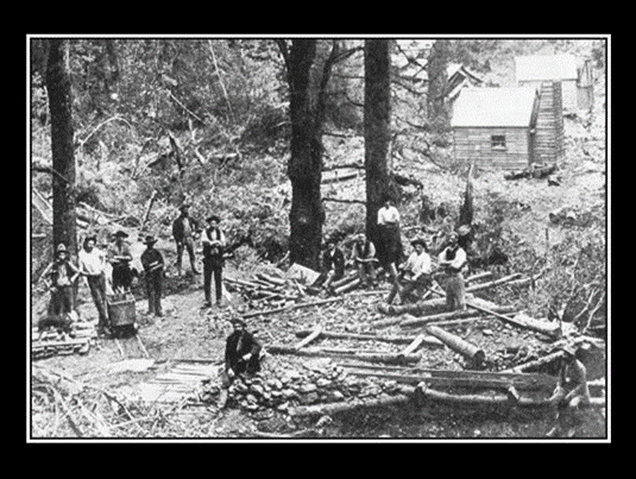 Devils Tower is one of many intrusive igneous bodies that comprise the northern Black Hills Eocene alkaline magmatic province. The Black Hills are the Laramide arch that marks the furthest east extent of the Rocky Mountains. Laramide deformation began in the area about 64 million years ago and ceased about 40 million years ago. Deformation was the result of northeast directed compressive stress due to subduction along western North America. The subduction was initiated with the continents’ separation and westward migration from Africa 185 million years ago with the breakup of Pangea. It produced a northwest trending domal fold called an anticline that is 140-mile-long with a maximum width of 75 miles. Precambrian weakness zones were reactivated as faults and fractures in the structure. Structural relief on the flanking monoclines above the faults is over 5,000 feet. The Phanerozoic sedimentary rocks overlying the domal structure were eroded back within the last ten million years. 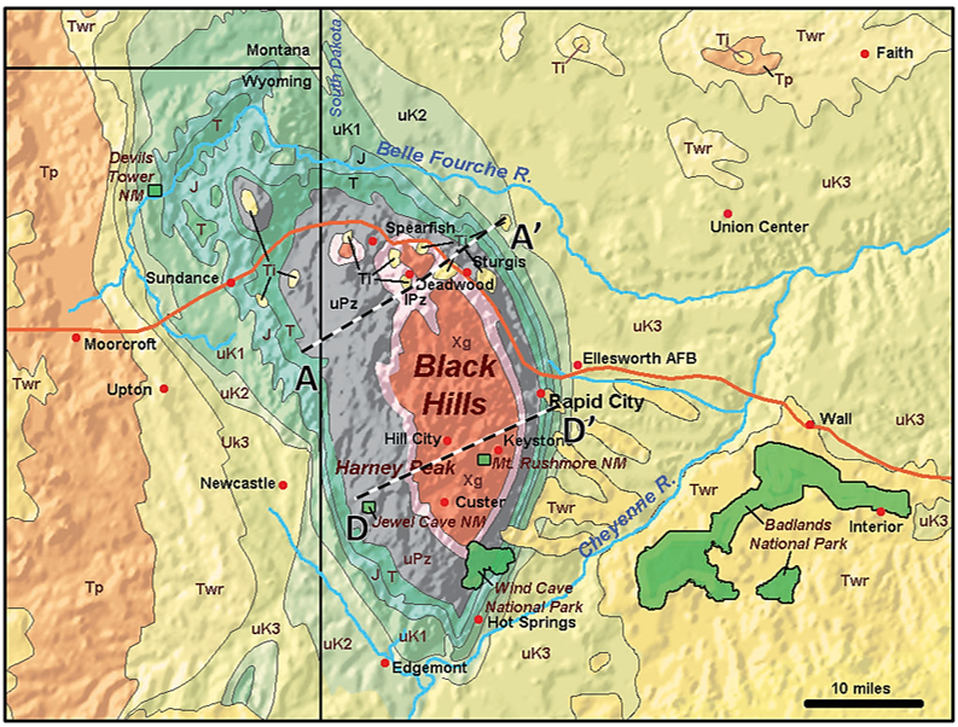 Southwest to northeast structural cross sections AA’ (northern Black Hills) and DD’ (southern Black Hills). Tertiary intrusive rocks are only developed in the northern Black Hills (AA’). The Early Proterozoic Homestake Formation is the main gold ore zone. The blocks of Archean crust in the southern Black Hills (DD’) may be some rafted portions of the Superior craton. Complexity of folding and metamorphosis within the Precambrian rocks indicates the multiple deformational events that these ancient units were subjected to before, during, and after the Trans-Hudson tectonic event. The “Great Unconformity” between Precambrian and Phanerozoic rocks indicated by solid red line.
Image:Redden, J.A., and DeWitt, E., 2008, Maps showing geology, structure, and geophysics of the central Black Hills, South Dakota: U.S. Geological Survey Scientific Investigations Map 2777, Sheet 2, Cross Sections AA’ and DD’; https://pubs.usgs.gov/sim/2777/downloads/2777_sheet2.pdf
The Precambrian rocks were deformed and intruded during the Trans-Hudson tectonic event. This was a continent-continent collision between the Wyoming and Superior cratons occurring 2.0 to 1.8 billion years ago. The tectonic fabric imparted to the rocks from this event would influence the location of the much later Laramide structuring and Tertiary magmatism. ​ 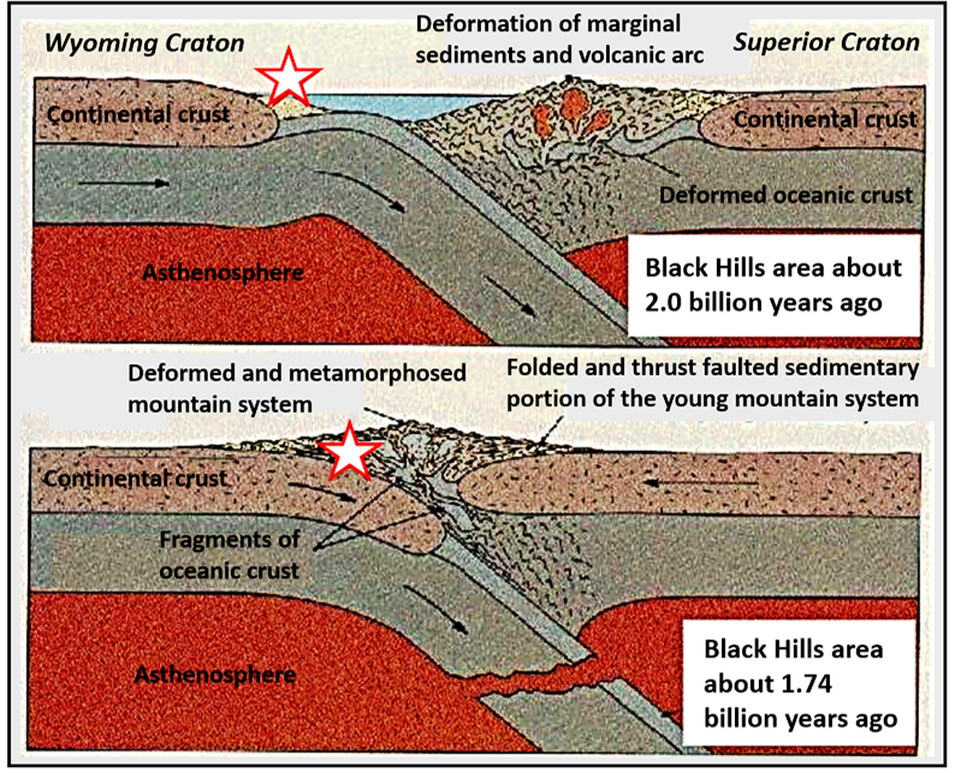 Trans-Hudson origin cross section showing the future Black Hills (star) granitic basement and supercrustal rocks before and after the suturing of the two cratonic plates.​
Image: After Lisenbee, A.L., 2014,Geology of the Black Hills PowerPoint; http://wyogeo.org/contents/plugins/innovaeditor/assets/Alvis%20Lisenbee%20Geology%20of%20the%20Black%20Hills%20Uplift%20-%20August%202014.pdf

An igneous trend of laccoliths, diatremes, sills and dikes developed from 46 to 58 million years ago (Eocene). The province extends about 70 miles from Bear Butte in the east, to the Missouri Buttes in the west and consists of alkalic intrusive bodies of mainly trachyte, phonolite, rhyolite and monzonite. Alkaline igneous rocks have higher concentration of alkali minerals (e.g. feldspathoids (nepheline and leucite), sodic amphibole (glaucophane), sodic pyroxene (aegirine)) and are deficient in silica. Volumetrically these rocks account for less than one percent of all igneous rocks.  Their presence in a continental intraplate setting is extremely rare. The province is aligned along a N70-80°W lineament that is an extension of the Sage Creek fault. A Bouguer gravity profile of the lineament is interpreted to be a deep-seated, left-lateral wrench fault with over 30 miles (50 km) of offset on the basement. The northern Black Hills magmatic province is part of a larger N40°W of alkalic magmatism that extends 435 miles (700 km) into southern Alberta (see map below). This larger trend is called the Great Plains Alkali Province (GPAP). This larger igneous trend is the farthest Tertiary magmatism resulting from the subduction beneath the North American plate (Laurentia). It may mark the eastern edge of a slab window in the subducted Farallon-Kula plate (progressive rollback of the western edge of the Farallon plate to create the gap to allow mantle upwelling).   ​ 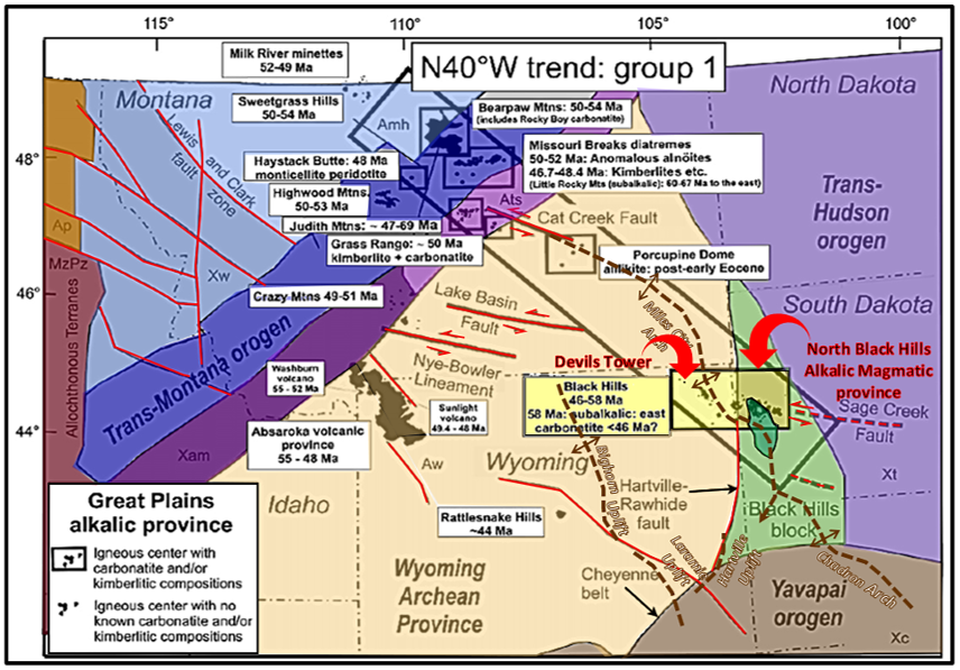 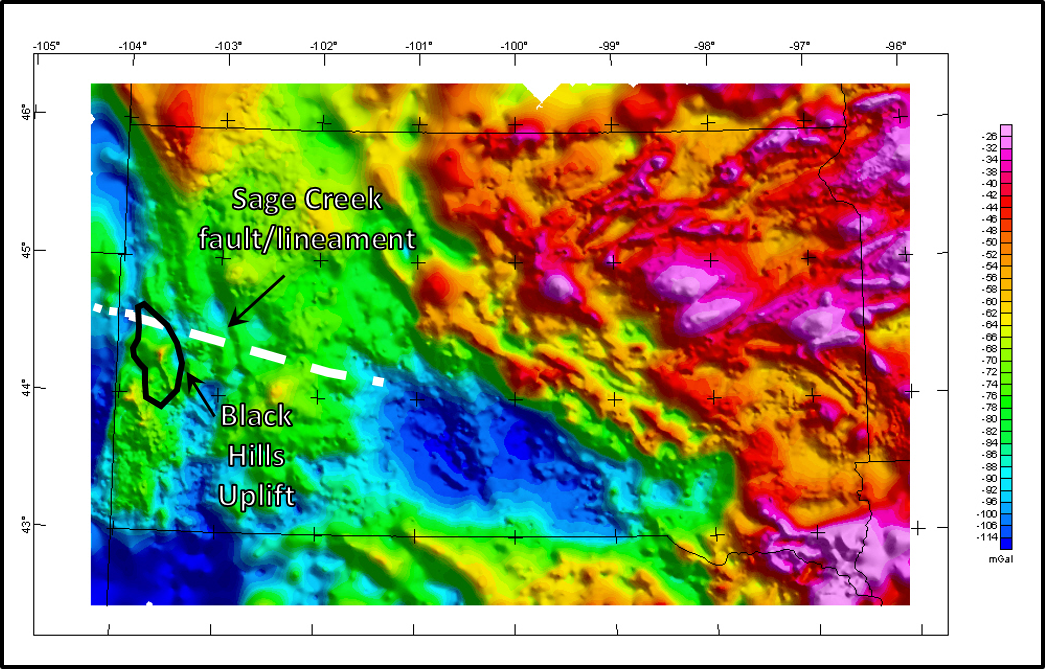 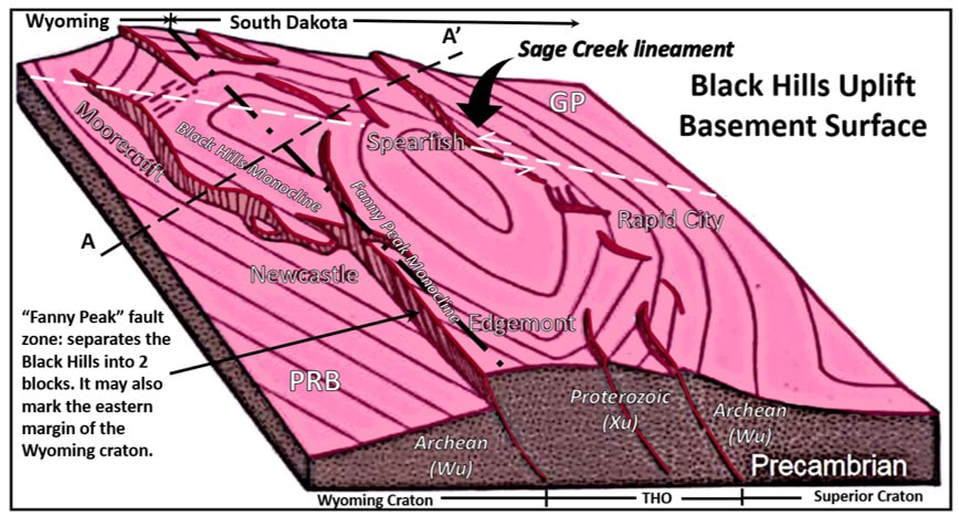 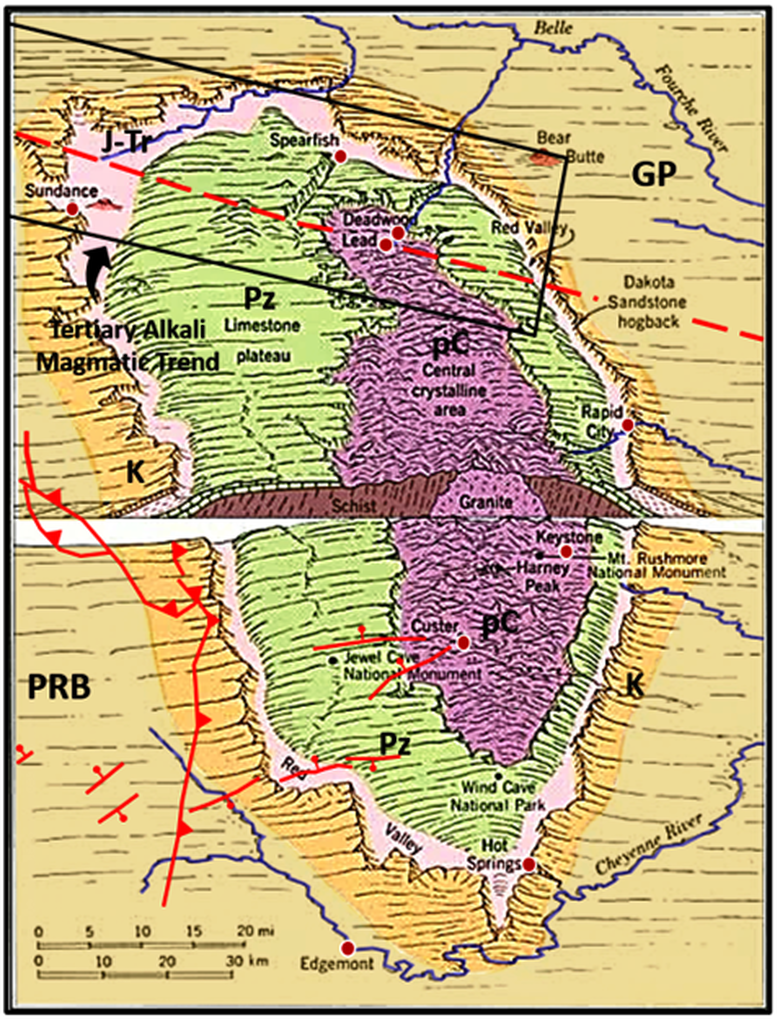 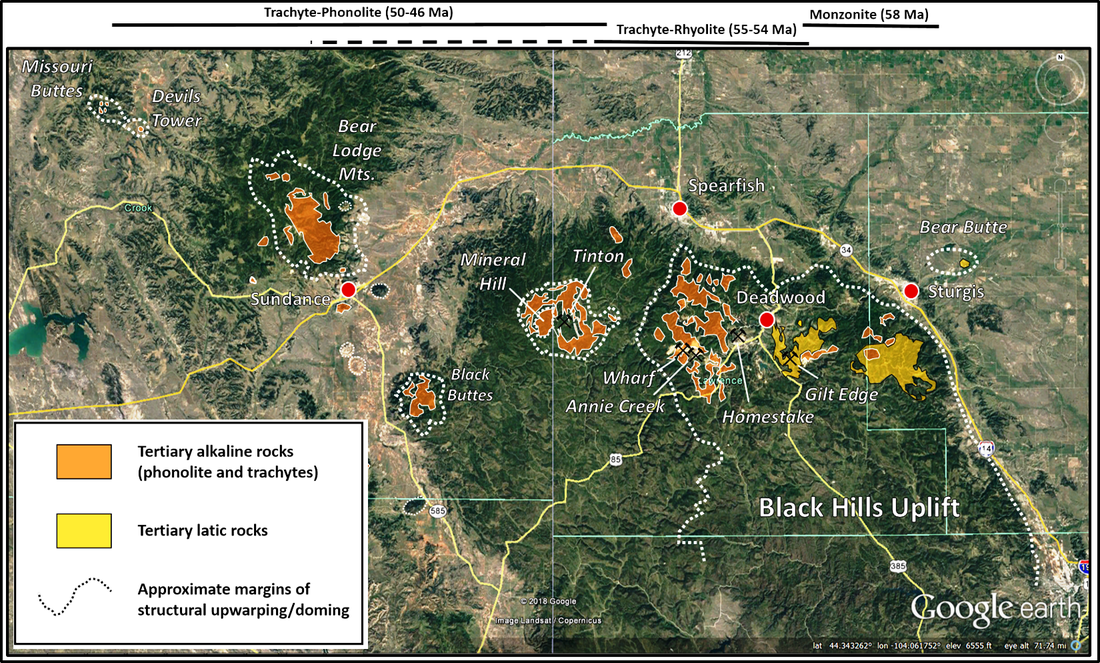 The northern Black Hills Eocene alkalic magmatic province. Several smaller domes exist in the area where sedimentary rocks still cover the igneous intrusions (white dotted lines). The folding and doming of sedimentary rocks is caused by igneous intrusion.  Structural cross section A to A’ above shows one of these intrusions at Bear Butte with rhyolite in the core of the structure.
Image: Google Earth; Data: Lisenbee, A.L., 2014, Geology of the Black Hills PowerPoint; http://wyogeo.org/contents/plugins/innovaeditor/assets/Alvis%20Lisenbee%20Geology%20of%20the%20Black%20Hills%20Uplift%20-%20August%202014.pdf

The presence of gold in the Black Hills was reported by Father De Smet in the 1860s. Horatio Ross, a civilian prospector attached to the Custer Expedition, first panned placer gold along French Creek near Custer, South Dakota on July 31, 1874. Gold mineralization occurs in several places along the trend of Eocene intrusive domes, but two Precambrian ore sites dominate the gold recovery. Homestake Mine at Lead accounts for over ninety percent of the produced gold from Precambrian ore bodies (Homestake Formation, shown in cross section AA’ above and on the schematic cross section below). About four miles to the west the majority of the remaining gold ore is found in the Cambrian Deadwood Formation at Bald Mountain Mine. Hydrothermal replacement during Eocene magmatism and older placer deposits in the basal conglomerate account for these smaller deposits.  Minor amounts of ore were recovered from quartz veins in Precambrian quartz-mica schist. 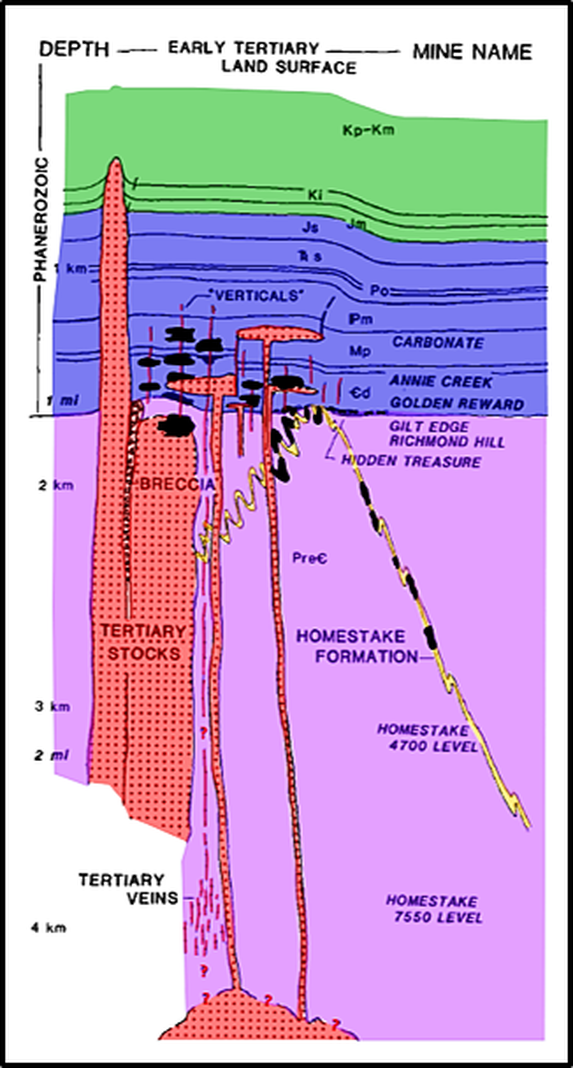 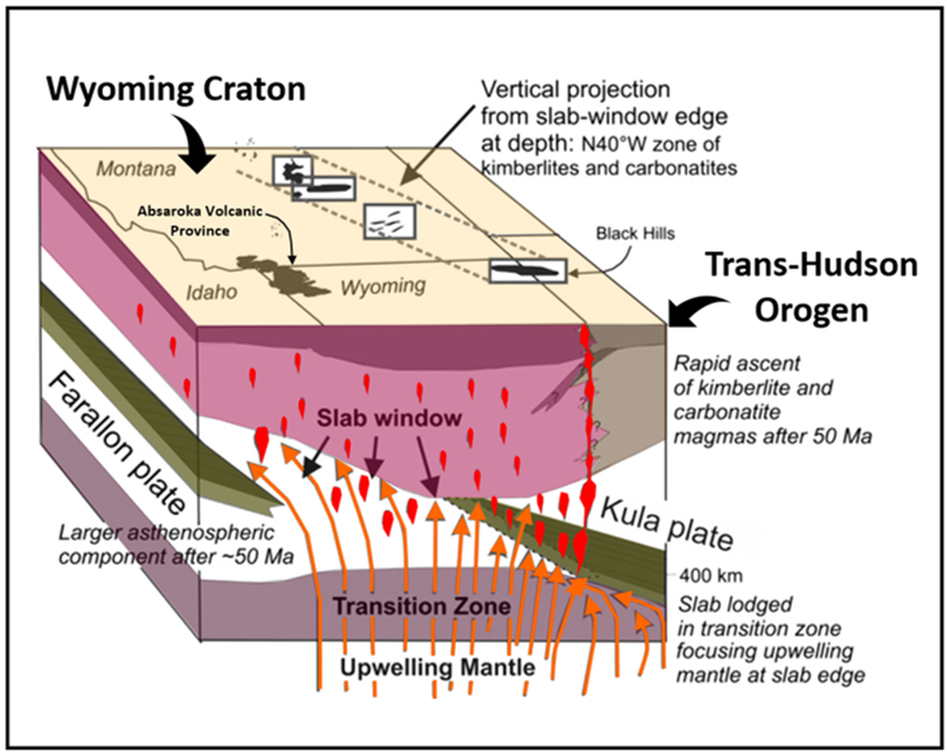 Geologic model of Northern Black Hills and Great Plains alkalic magmatic province. Model includes (1) southwestern edge of Kula plate in the transition zone (layer between the upper and lower mantle where mineral crystal structure becomes denser; subducted plates can become stuck and or detached here), (2) upwelling mantle (through the gap between the plates), and (3) “relaxation” (tension) of thick Archean lithosphere 50 million years ago (Ma). Melting occurred as upwelling mantle passed throughthe transition zone and was focused at the edge of the Kula slab (western edge) and Farallon plate (eastern edge). After extension began in Idaho and Montana at ~53 to 49 Ma, alkalic magmas were able to ascend rapidly upward through fractures in the thinned lithosphere, along the N40°W zone above the Kula slab edge. The N40°W zone thus represents a vertical projection up to the surface from the slab edge at depth and marks the easternmost margin of Eocene volcanism.
Image: Modified after Duke, G.I., 2009, Black Hills–Alberta carbonatite–kimberlite linear trend: Slab edge at depth?: Tectonophysics 464, Fig. 2, p. 187; http://www.academia.edu/3642234/Duke_Tecto2009

Devils Tower with its columnar jointing is the most easily recognized of the intrusive bodies in the magmatic province. The jointing is formed by contraction as the magma cools. The joints align perpendicular to the direction of the cooling front. The feature can be separated into four segments based on the nature of the columnar jointing. The upper columns (UC) extend about 590 feet (180 m) from the top.  Vertical columns, over ten feet in diameter are present. The lower columns (LC) exhibit a smaller diameter beginning with 6-9 feet at the base and tapering to 4 feet at the transition with the upper columns. The transition zone may mark a variation in mineralogy. Dark compositional layering separates the two segments. At the shoulder (S) the lower columns continue down but splay outward as they approach the base.  The base (B) displays more fractures and variability in orientation of columns. It merges into an extensive scree pile. The tower penetrates through the Jurassic Sundance Formation in the Belle Fourche river valley. Three miles to the northwest the Missouri Buttes emerge out of the landscape developed in the Jurassic Morrison Formation.

Magma cooling profiles and resulting pattern of columnar joints.
Image: Bentley, C., 2011, https://blogs.agu.org/mountainbeltway/2011/08/31/columns-form-perpendicular-to-cooling-fronts/
​The lithology of the tower igneous rock is a phonolite porphyry. The large crystals of feldspar indicate that initially the magma cooled slowly, as an intrusive deposit would. Whereas a volcano is an extrusive deposit that would have cooled quickly and produced rock with extremely fine crystal size. 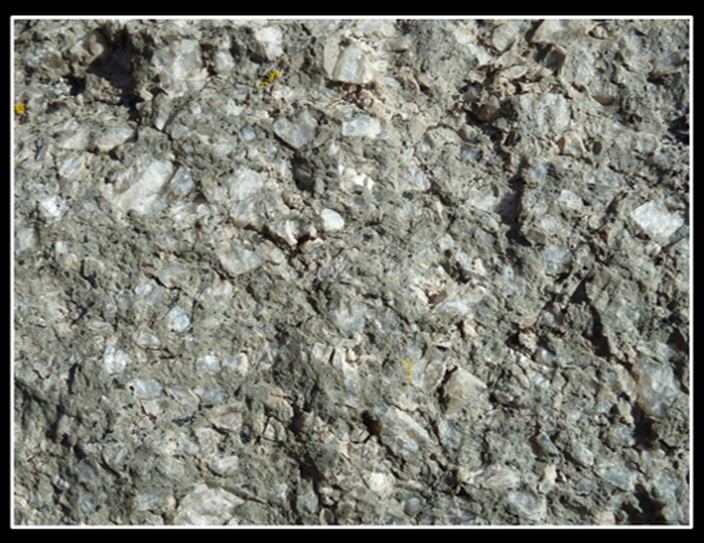 Hand sample of Devils Tower phonolite porphyry. Porphyry texture indicates two stages of cooling. The first is slowly as the magma ascends for the large white feldspar crystals to grow. The second is rapid, at shallow depth, resulting in a fine-grained matrix surrounding the large crystals.
Image: Morris, P., 2013, Phonolite porphyry of Devils Tower in Wyoming in USA https://upload.wikimedia.org/wikipedia/commons/1/12/Phonolite_Porphyry_of_Devils_Tower_in_Wyoming_in_USA.jpg 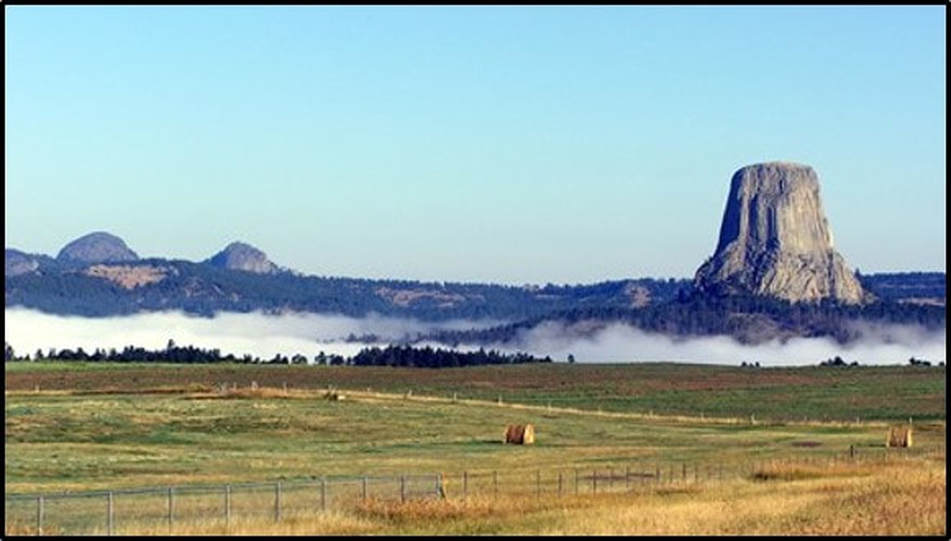 Missouri Buttes and Devils Tower phonolitic intrusions of the Eocene alkaline magmatic province rising from the plains of west central Cook County, Wyoming. Note the top of the tower is slightly domed. This surface marks the upper limit of penetration of the intrusion into the former sedimentary cover. The surface also reflects some contraction from magma cooling and minor stream erosion as the monument was uncovered. Or … it just could be the remnant of the alien ship landing pad.
Image:https://www.nps.gov/deto/learn/historyculture/places.htm
​Several of the igneous related structures are subtle due to the Tertiary intrusive rock not being exposed at the surface. Erosion has not yet removed the Phanerozoic cover from the igneous core. Green Mountain Dome located 2.5 miles east of Sundance is a good example of such a feature. 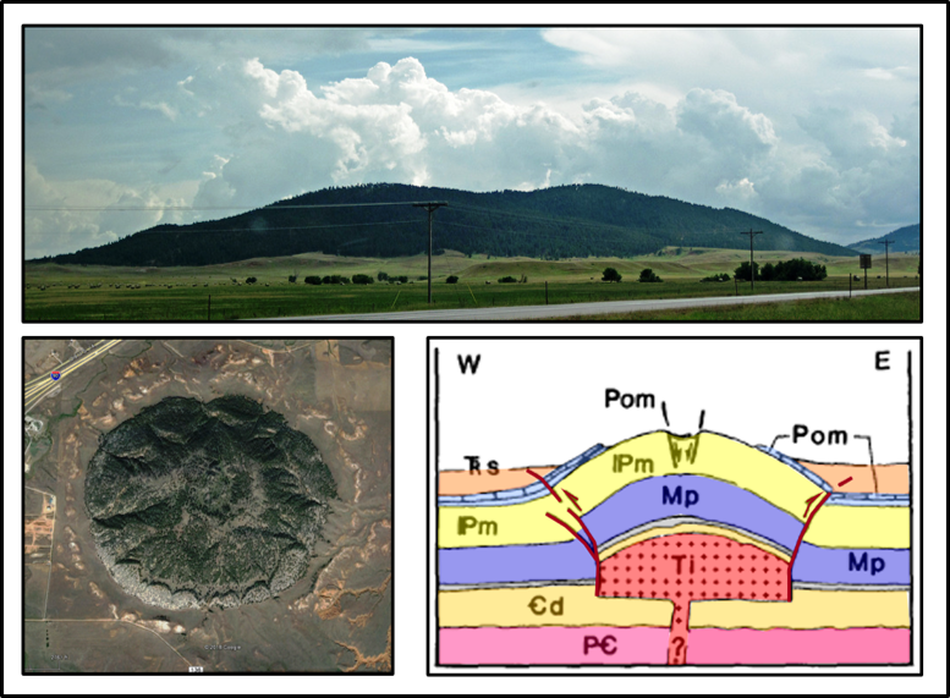 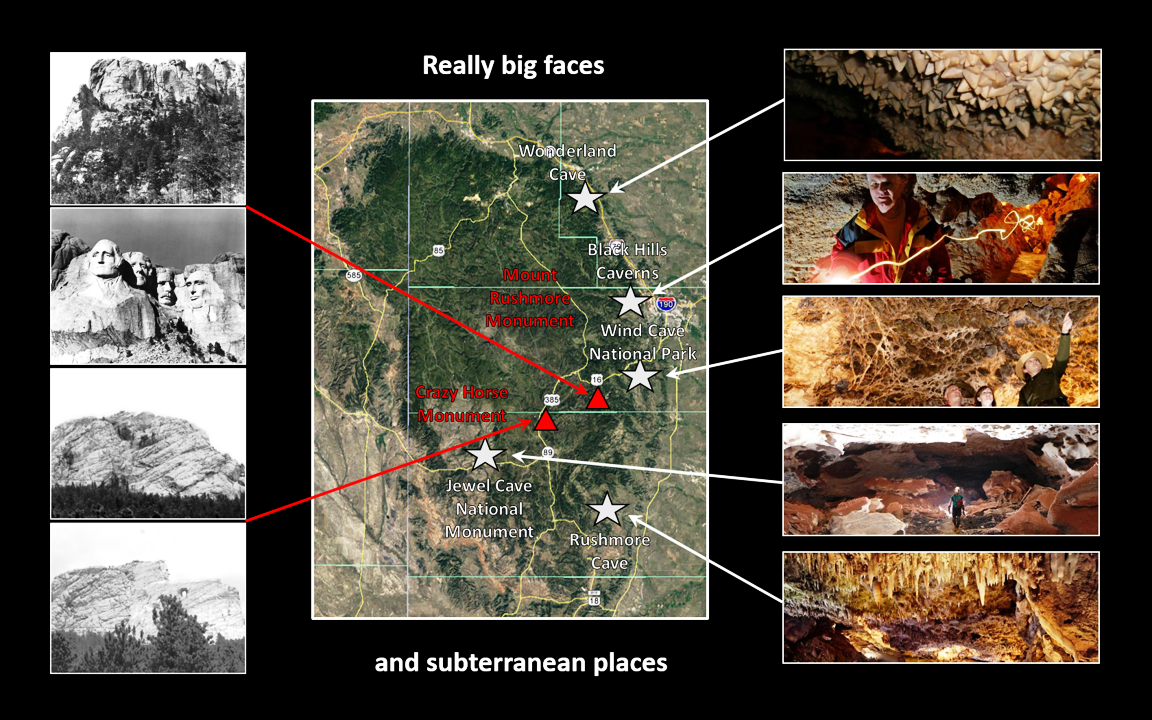 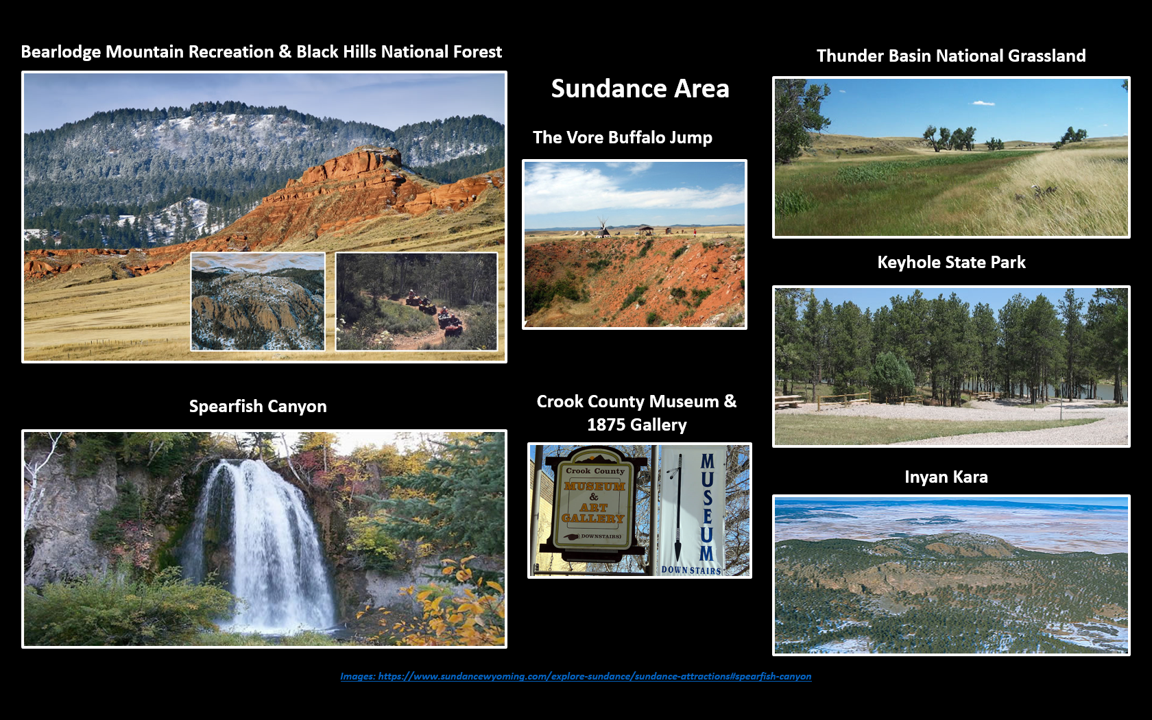