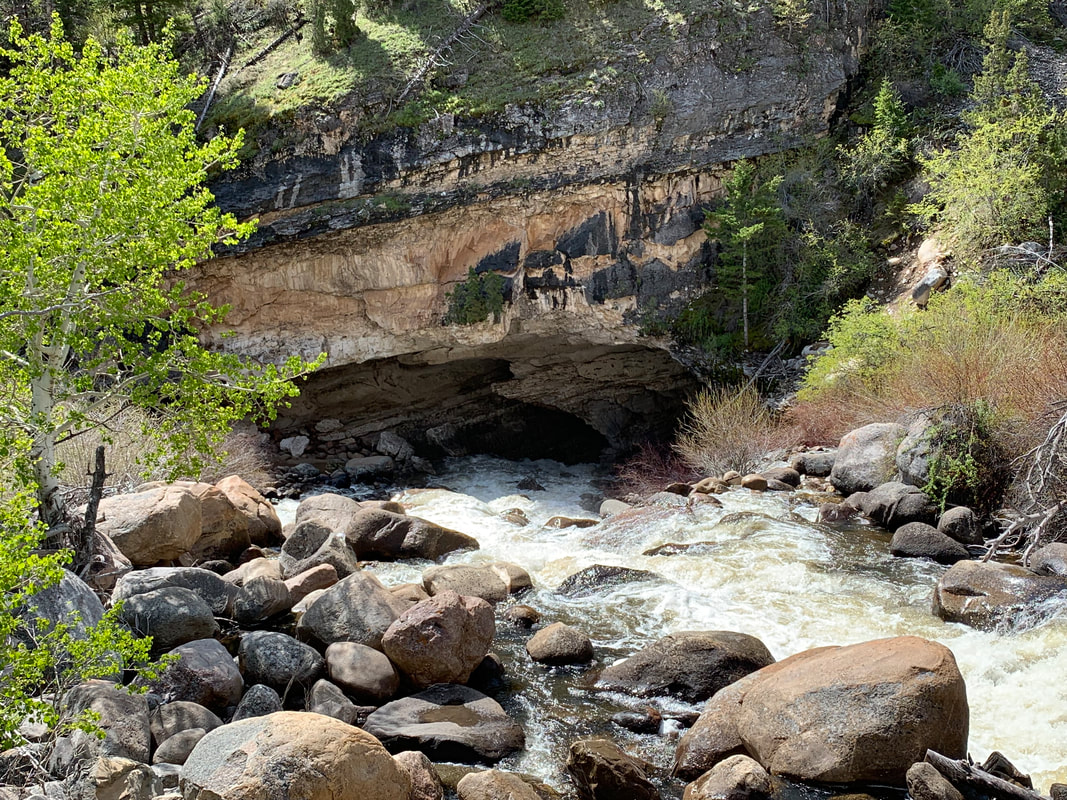 A scenic canyon where the Middle Popo Agie River disappears into a cliff and then reappears a quarter mile downstream in a natural pool filled with large trout that you can feed. Optional 3.4 mile roundtrip hike to Popo Agie waterfalls. The sink, rise and waterfall all feel like Wyoming at its best and we highly recommend it.

The first evidence of people in Sinks Canyon is dated to 9,000 years ago. For thousands of years animals and native Americans used the valley of the Middle Popo Agie river as a travel corridor to the Wind River Range. The valley was an annual migration route for game animals crossing the mountains due to the low grade. The Indians marked their passage with rock art on the canyon walls. The area provided stone for tool making and numerous berries in the Fall. 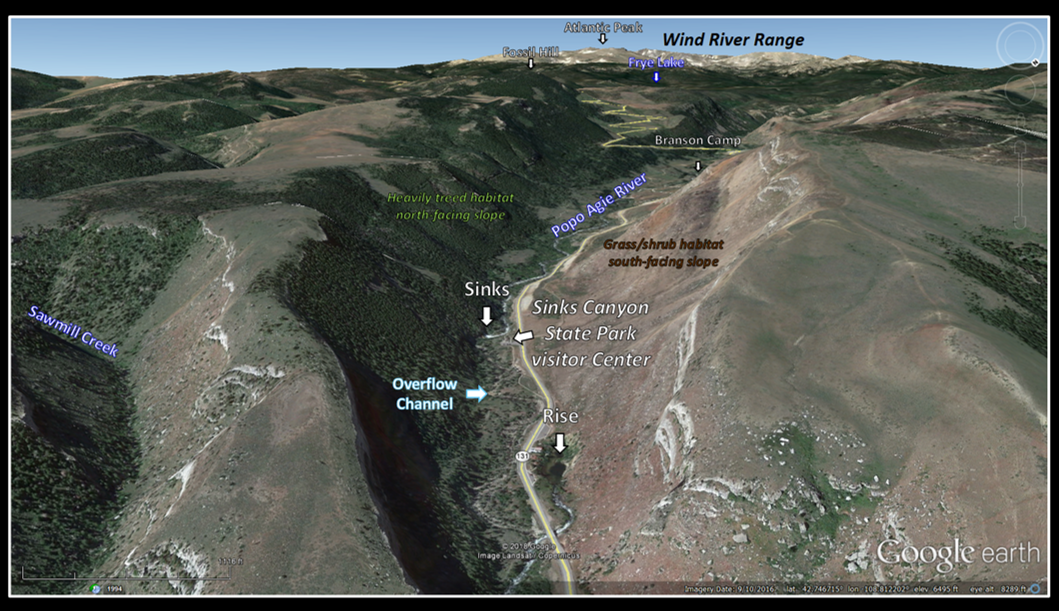 Southwest aerial view of Sinks Canyon. The amount of winter sunlight and snow accumulation is responsible for the variation in canyon slope habitat.
Image by Google Earth
Colonel Frederick W. Lander led an expedition in 1859 to complete a wagon road between South Pass, WY and Fort Hall, ID. The expedition established the Lander Cutoff to avoid the Utah War between the Mormons and the U.S. government. Perhaps more important than the road was the work of the three artists who accompanied the expedition recording images of the exploration. Albert Bierstadt, Francis Seth Frost, and Henry Hitchings helped create a romanticized view of the American West with their art. One historian noted: “Bierstadt painted the West as Americans hoped it would be, which made his paintings vastly popular and reinforced the perception of the West as either Europe or sublime Eden” (Hyde, A.F, 1993). 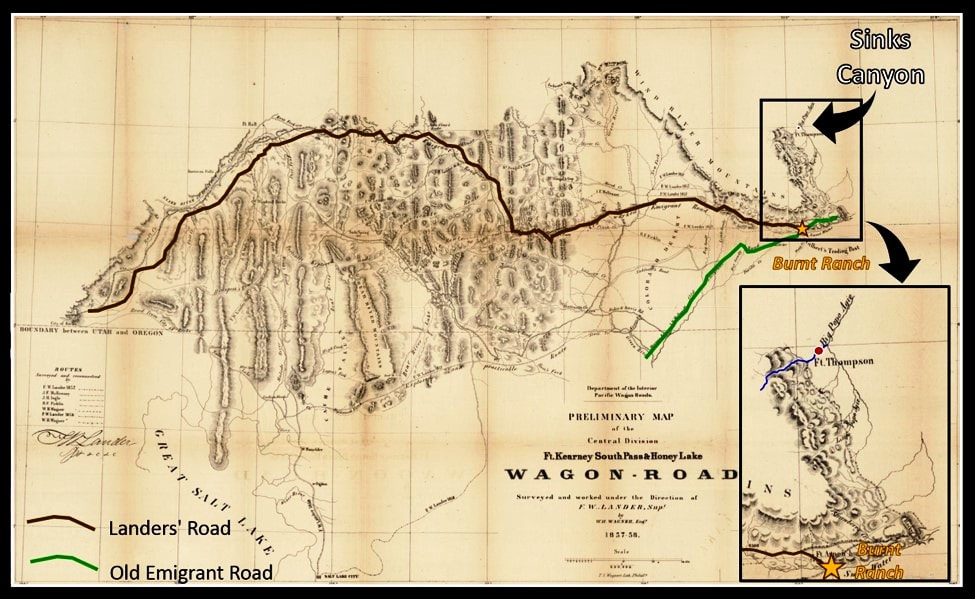 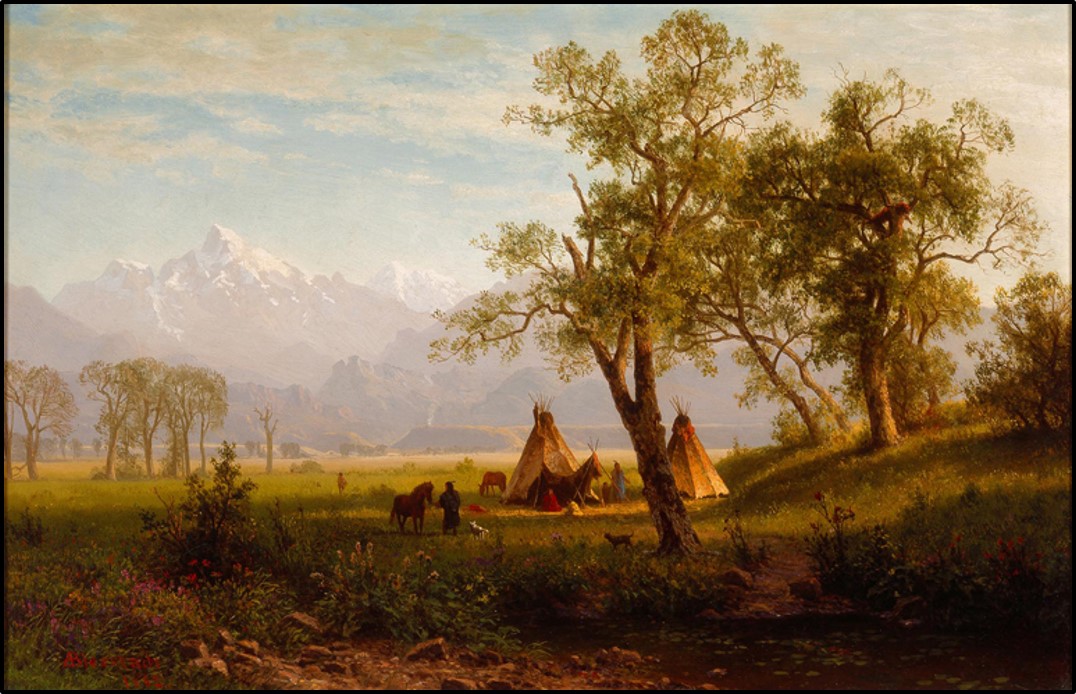 Sinks Canyon presents a landscape cut by a river and shaped by glaciers on the back limb of the Cretaceous to Eocene-age Wind River Range. The asymmetric arch is elevated by a southwest to south directed thrust fault system having 8.5 miles of vertical offset and over 16 miles of horizontal basement separation. The pre-Laramide strata were faulted, fractured and folded around the basement mass. Streams began eroding the highland creating numerous canyons over time. The Precambrian crystalline basement core was exposed, as was the flanking Paleozoic rock. The backlimb slope dips to the northeast at 10-15 degrees into the Wind River basin. 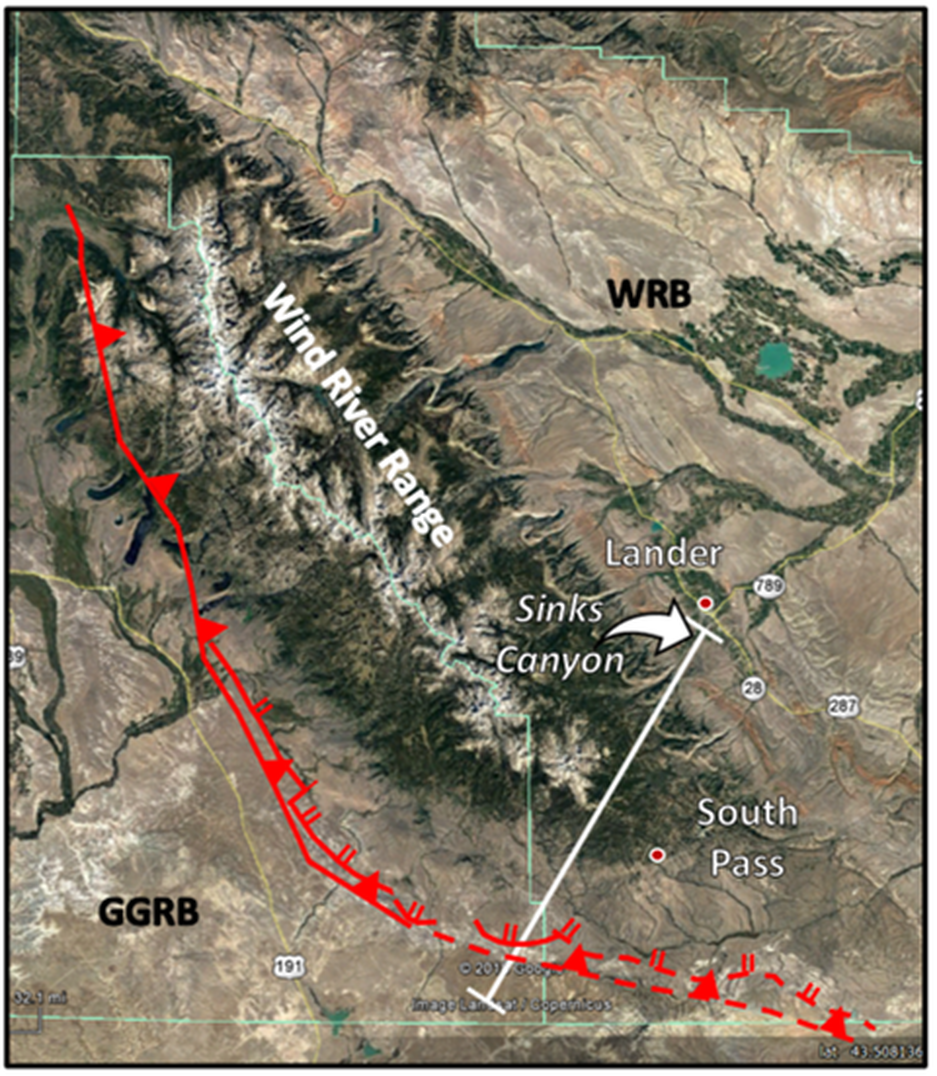 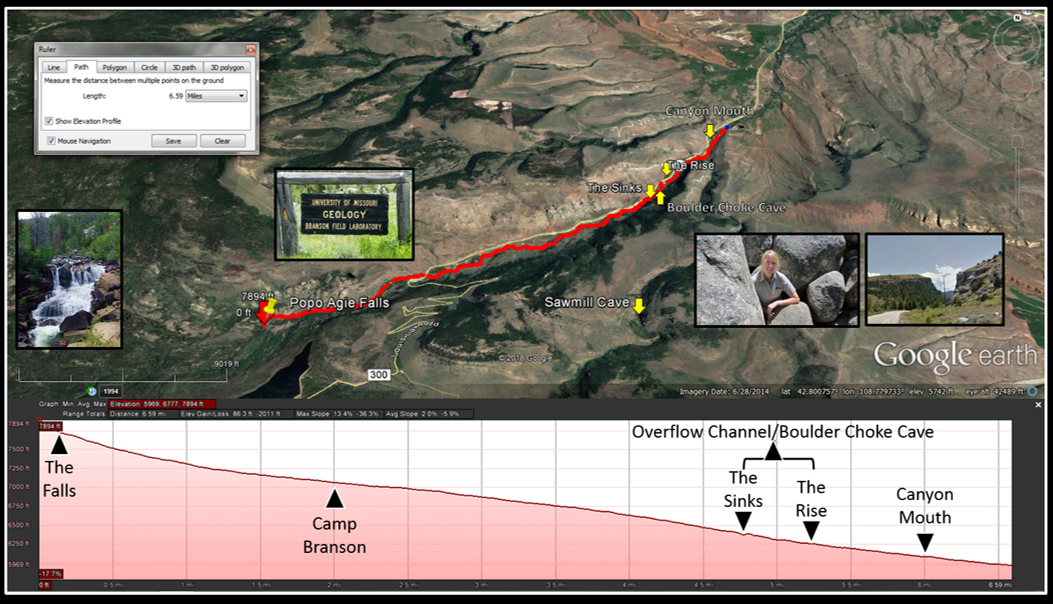 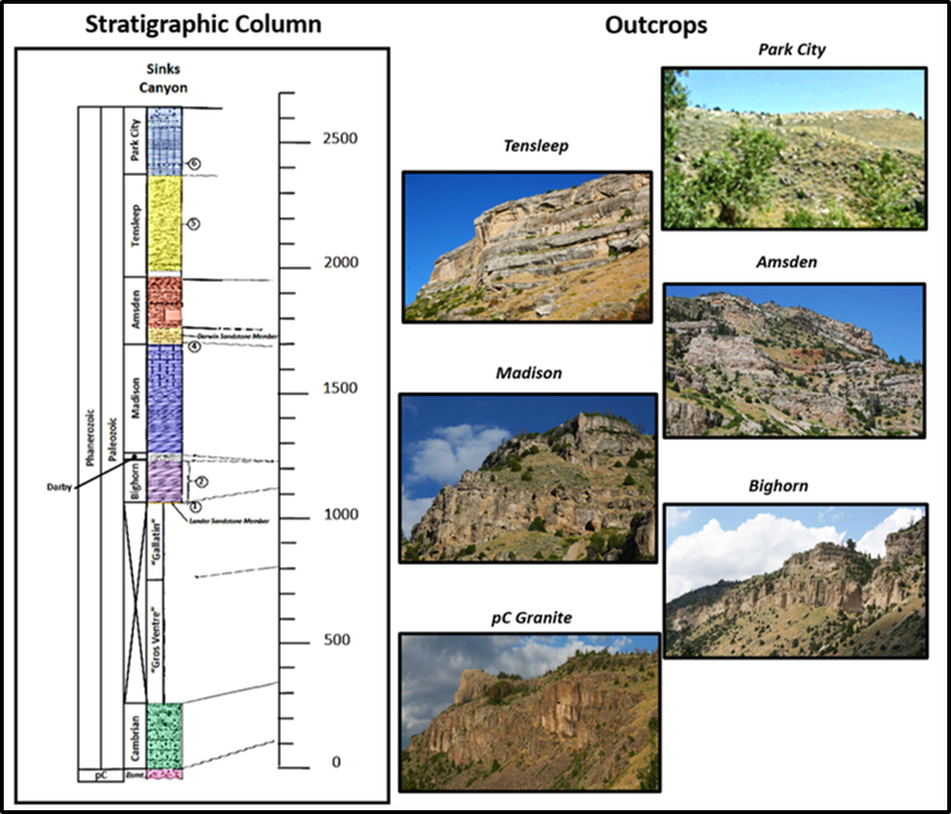 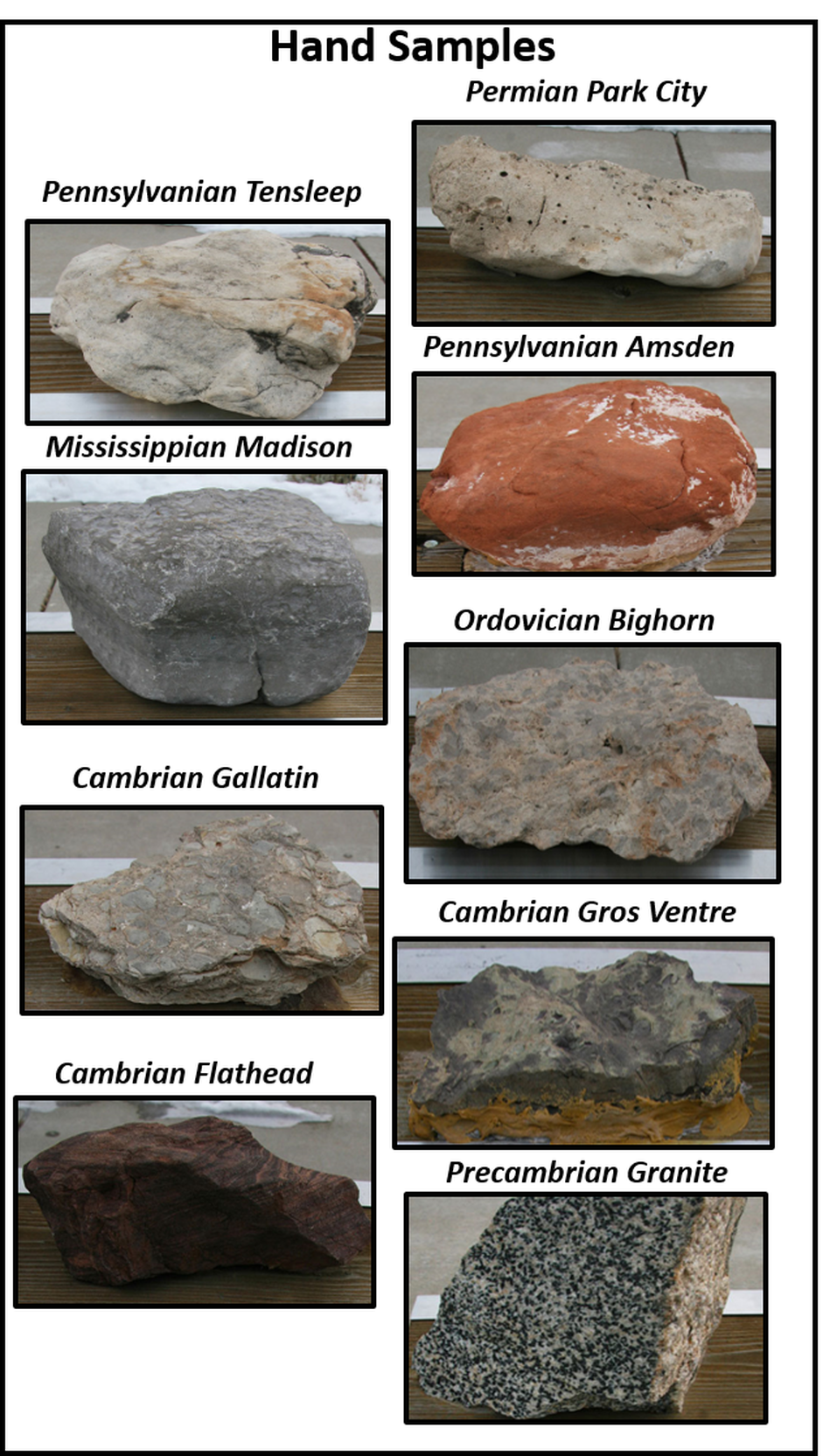 Paleozoic rocks exposed in Sinks Canyon, youngest at the top right and oldest at bottom right.
Images: Sinks Canyon State Park website at http://www.sinkscanyonstatepark.org/nature/geology/geologic-timeline.html
There are several caves and karst features in the area found in the Madison Formation. The Madison was deposited when Wyoming was covered by a shallow, warm sea during the Mississippian age (325-345 million years ago. Sea level fell, exposing the Madison for a period of about 25 million years. This long period exposure of the carbonate rock allowed paleokarst to develop on the upper Madison. The basal unit of the upper Madison is a regional solution collapse zone.

During the Pleistocene the Wind River mountains underwent cyclic glacial and interglacial episodes.  Massive volumes of ice move down the stream valleys bulldozing them into U-shaped canyons. Further evidence of their passing is preserved in the cirques and lakes in the high mountains, and the moraines and glacial erratics on the valley floor. The canyon may contain the most complete record of Pleistocene glaciation in the entire Wind River Range (Dahms, 2004). The remains of at least six ice advances are mapped in the Sinks Canyon glacial deposits (see map): 1) 5-fold complex of Pinedale (22-16 Ka), 2) Early Wisconsin (70-60 Ka), 3) Bull Lake (200-95 Ka), 4) Sacajawea Ridge (770-660 Ka), 5) young pre-Sacajawea Ridge (>770 Ka), 6) older pre-Sacajawea Ridge (>770 Ka).

The Madison at Sinks Cave was exhumed during Pleistocene glaciation. Paleokarst and fractures were exposed to glacial melt water containing high concentration of carbon dioxide (CO2) that reacts with water (H2O) to create carbonic acid (H2CO3). Dissolution of the Madison enlarged and extended the cave network. Several caves and sinks occur in the upper Madison Formation in the Sinks Canyon area. In 1990, Boulder Choke Cave was discovered in the overflow channel by the park superintendent. Park employees give guided tours with advanced notice. 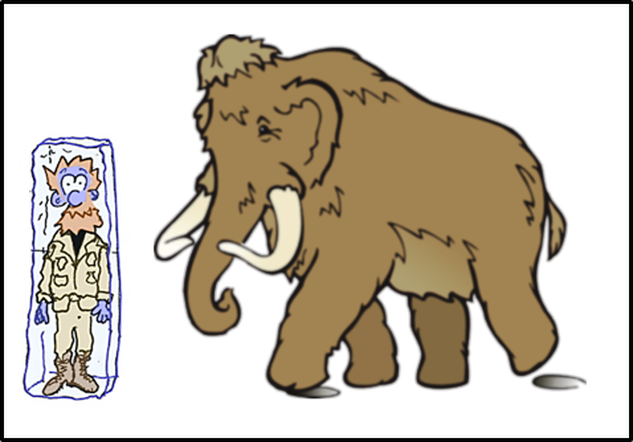 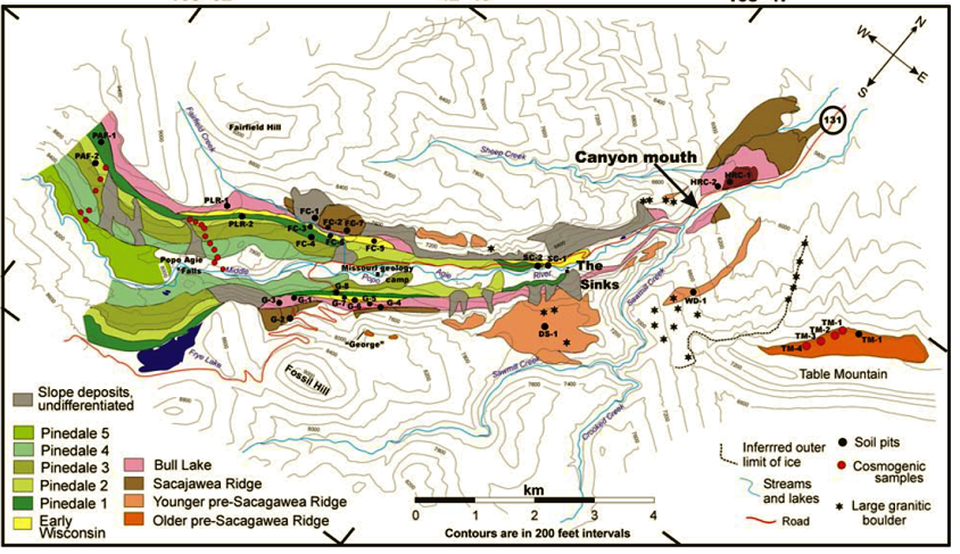 The Sinks and The Rise

The Popo Agie is a Crow word meaning “gurgling river.”  Sinks Canyon is named for a feature called the Sinks, where the river flows into a cave and vanishes. It reappears a quarter mile downstream at the Rise.  During Spring runoff stream flow can exceed the swallowing capacity of the cave. The excess water spills into an overflow channel on the south side of the highway. The connection between the sink and the rise was established from dye tracer tests. The underground river travel time is two to four hours between the sink and rise. More water resurfaces at the rise than disappears at the sink. Sawmill Creek, next drainage to the east, probably contributes to this flow by seepage into fractures connected to the same karst system. 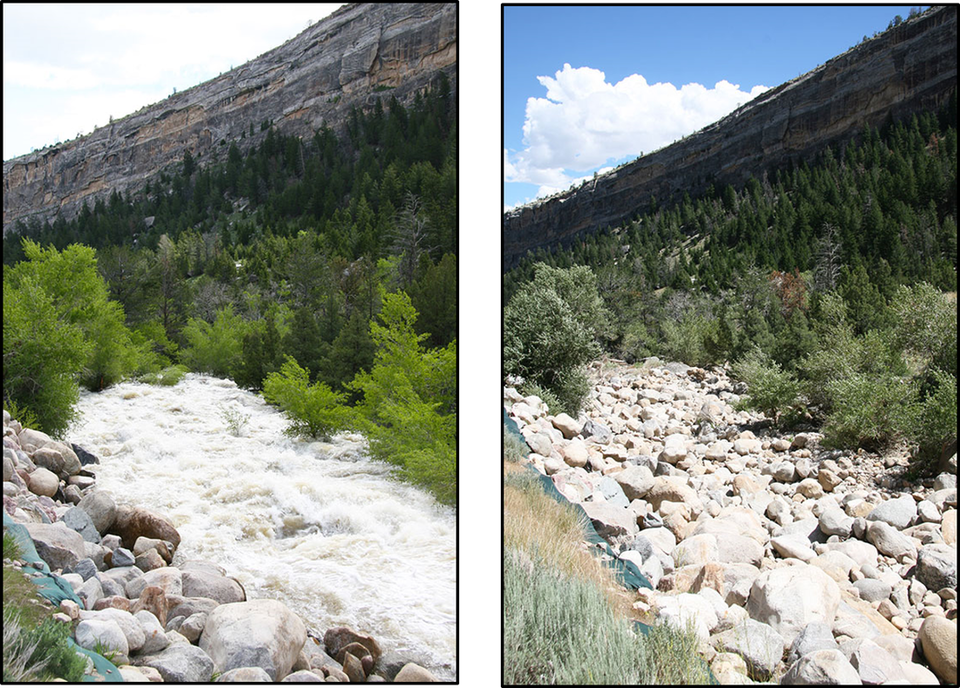 In 1911, Professor Branson from the University of Missouri began teaching a summer geology field course in the canyon. The area was selected for the diversity of geology and the excellent exposures across a vast span of the earth’s history.  A permanent location (Camp Lander) was established in 1929. The site was renamed Branson Field Laboratory after its founder in 1949. For over a century, thousands of geoscientists have honed their skills at this field laboratory. The Canyon is a display case of geology that all can enjoy.

​A memorable day awaits at the Sinks Canyon and the Middle Popo Agie River (pronounced Po Po shuh). Our recommendations are: 1) visit “The Sinks” where the river disappears into a limestone cavern and stop in at the visitor center, 2) visit “The Rise” where the river emerges in a peaceful pool and feed the big trout from the observation deck, 3) hike 1.7 miles from the Bruces Parking area and climb about 600 vertical feet to the Falls and return the same way (total 3.4 miles and about two hours), and 4) picnic in the Canyon or eat at some great restaurants in Lander.  Enjoy! 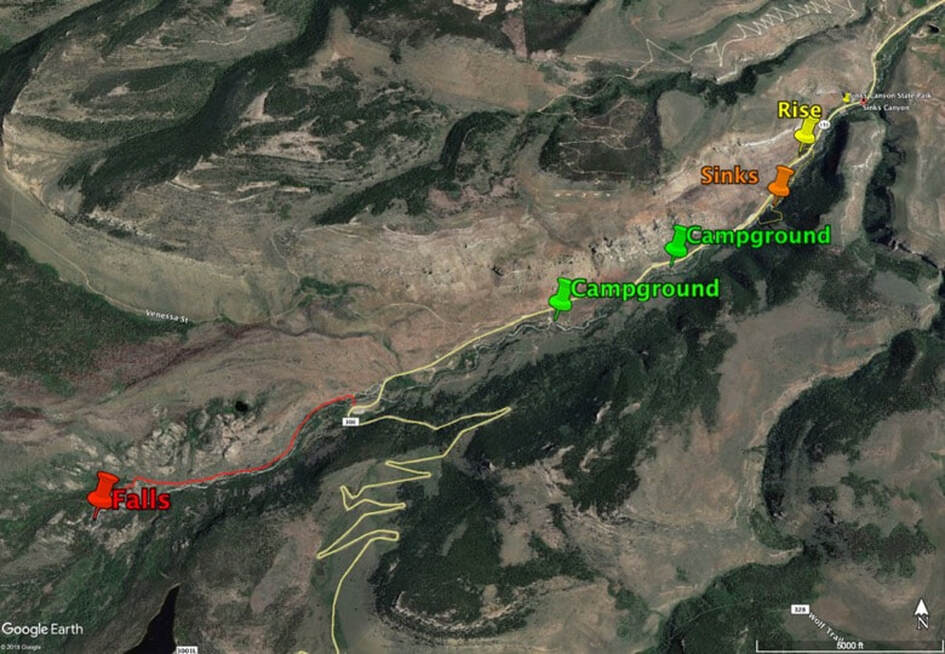 North aerial view of Sinks Canyon with hike to Falls in red.
Image by Google Earth 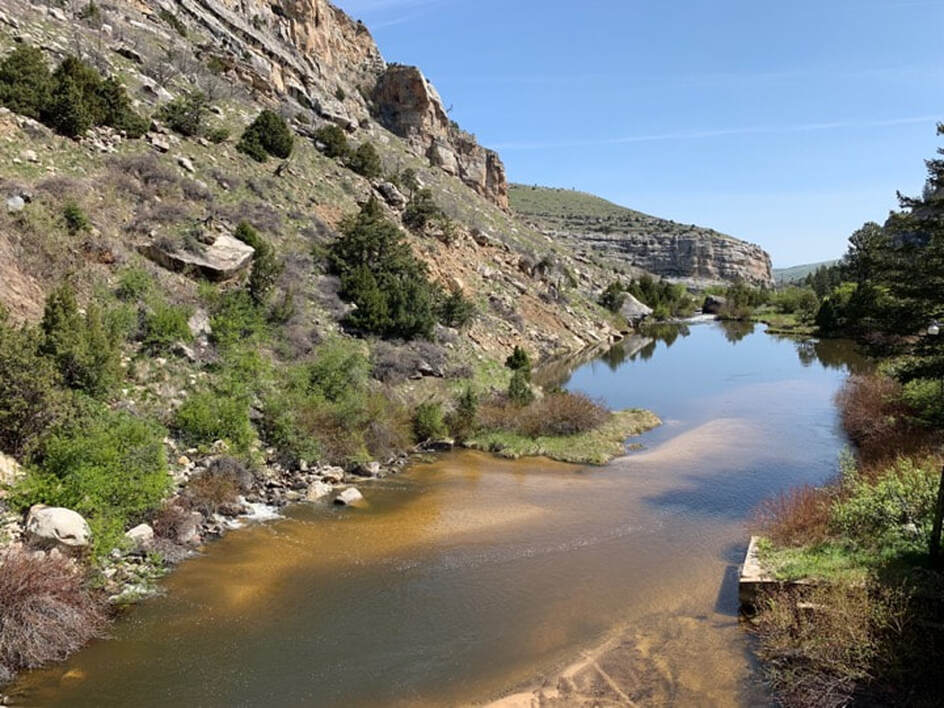 "The Rise" where the Middle Popo Agie River emerges and large brown and rainbow trout hang out (no fishing here). The State Park has a vending machine near the overlook deck that sells fish food.
Picture by Mark Fisher 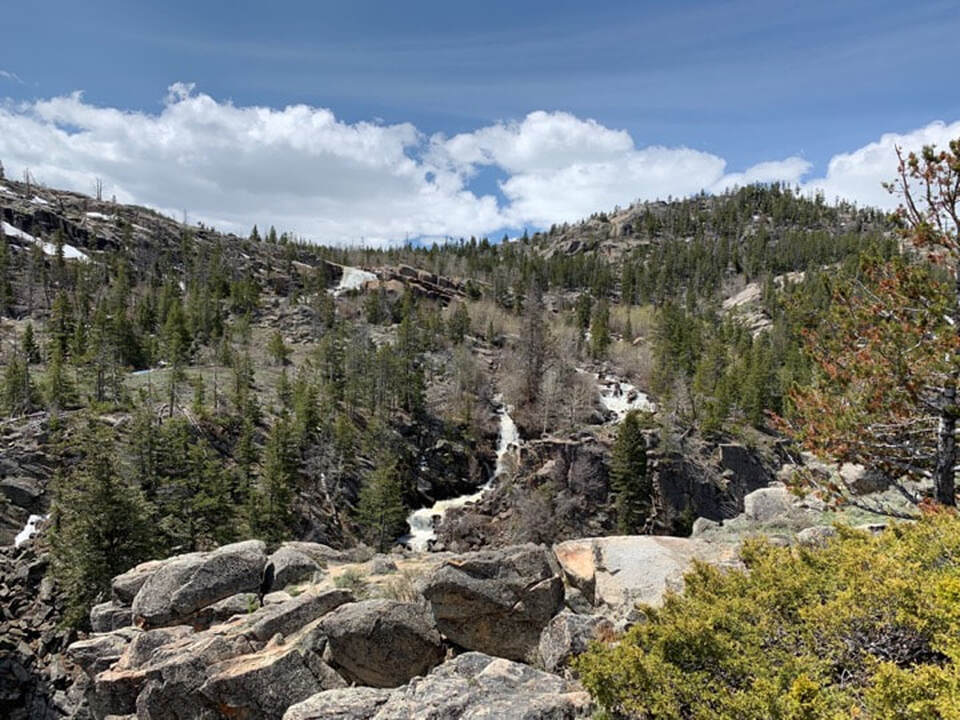