Rising about 7,000 feet above the plains, the Crazy Mountains are an awe inspiring sight of an island of jagged ice-carved peaks of Tertiary igneous rock. ​

History of Crazy Mountains and Basin

One legend for the name Crazy Mountains is that it is short for “Crazy Woman Mountains.” The Crow Indians supposedly named it for a woman who went insane and lived there after her family was killed by Blackfeet Indians. This story is apocryphal, and the likely origin is a simple translation error. The Crow called the mountains “Awaxaawapìa Pìa” (Ominous Mountains) because they held the area sacred and used the mountains for vision quests where the “little people” (see Pryor Mountains site) would give enlightenment. Early European explorers interpreted “visions quest” and “ominous mountains” as a place to go crazy, and hence the name.

The Bozeman trail was a short cut from Fort Laramie to the Montana gold fields at Virginia City. The route crossed Indian territory through the southern Crazy Mountain basin. Bozeman Pass is the highest elevation (5,703 feet MSL) along the trail, at the western entrance to the Crazy Mountains Basin. The route follows the path of a prehistoric game trail and was used by paleo Indians since the last ice age. William Clark, guided by Sacajawea, followed the trail on his return rendezvous with Captain Lewis at the confluence of the Yellowstone and Missouri rivers in 1806. Nelson Story drove 3,000 Texas Longhorns along the Bozeman Trail into the Paradise Valley in 1866. This drive was the first major cattle herd into Montana and began the states cattle industry.
​
Fort Ellis was built in 1867 about 4 miles east of Bozeman (founded 1864). The Fort was named after Colonel Augustus Van Horn Ellis who died at the Battle of Gettysburg defending Little Round Top. The forts mission was to protect settlers and miners in Bozeman and the Gallatin valley region, serve as an operations post during the Indian wars, a base camp for the exploration of the Yellowstone region, and to guard workers and property during construction of the telegraph and Northern Pacific Railroad. In 1870, Lt. Gustavus Doaneescorted the Washburn Expedition from the fort into the Yellowstone region. Colonel John Gibbon led infantry and cavalry eastward along the Yellowstone River from Fort Ellis as part of the military pincer movement against Siting Bull’s campsite in 1876. The campaign did not go as planned and the “Montana Column” arrived at the Little Bighorn battle ground two days after Custer’s 7th Cavalry defeat. Troops also participated in the Nez Pierce war of 1877 again under the leadership of Colonel Gibbon. The Northern Pacific Railroad (NPR) track reached Livingston in 1882 and laid a spur line to Cinnabar in 1883 just north of Yellowstone National Park (established 1872).  Livingston became an important hub to NPR to service trains before climbing Bozeman Pass. Originally the line used switchbacks to climb over the pass until 1884 when the first tunnel was completed 256 feet below and 3,652 feet in length through the pass. The Northern Transcontinental Survey produced a topographic map of the Crazy Mountain area in 1882 as part of locating the best railroad route between the 49th and 47th parallels. Fort Ellis was decommissioned and abandoned in 1886. 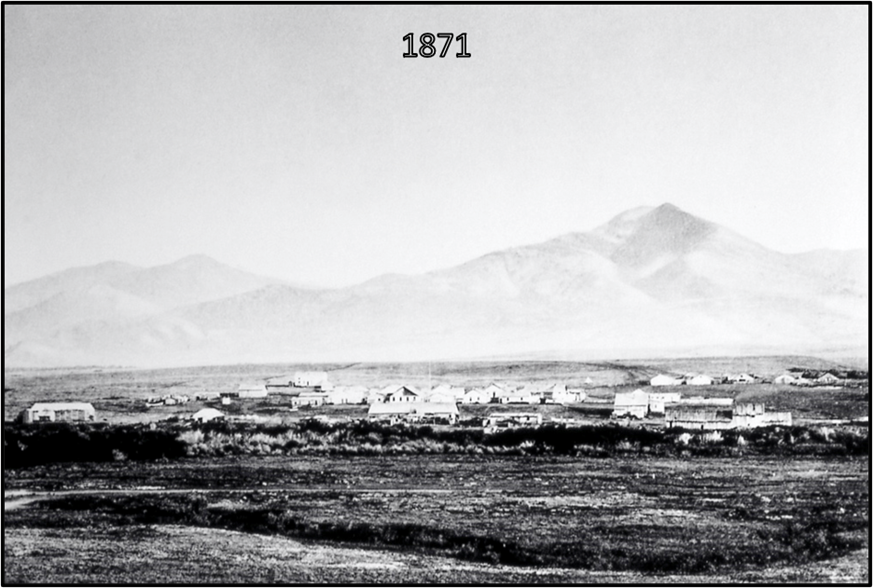 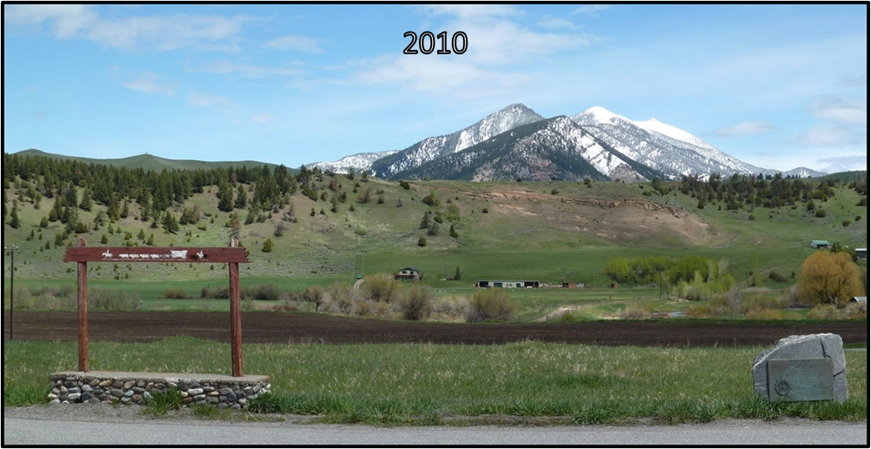 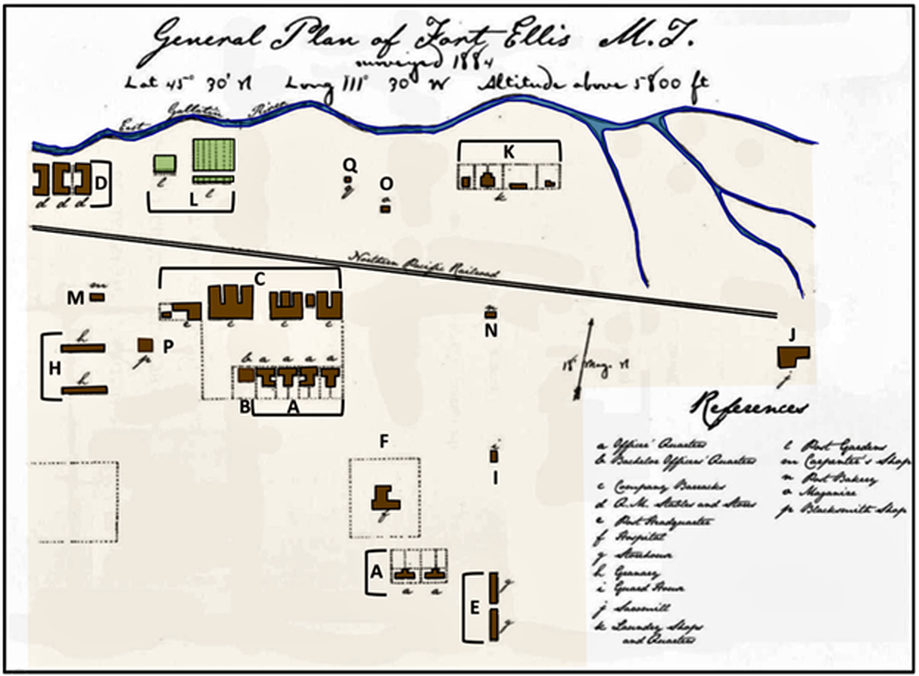 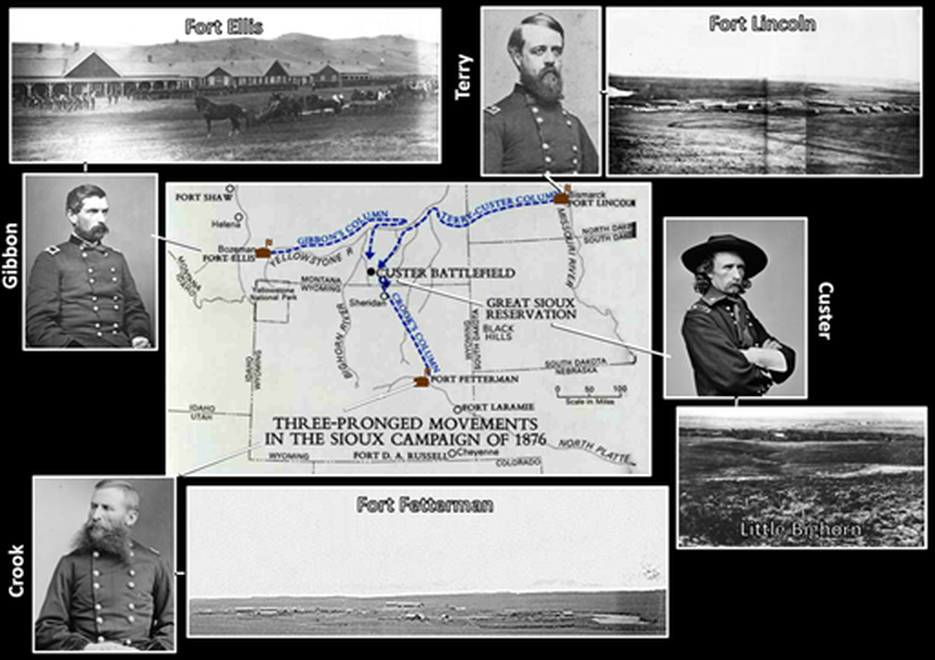 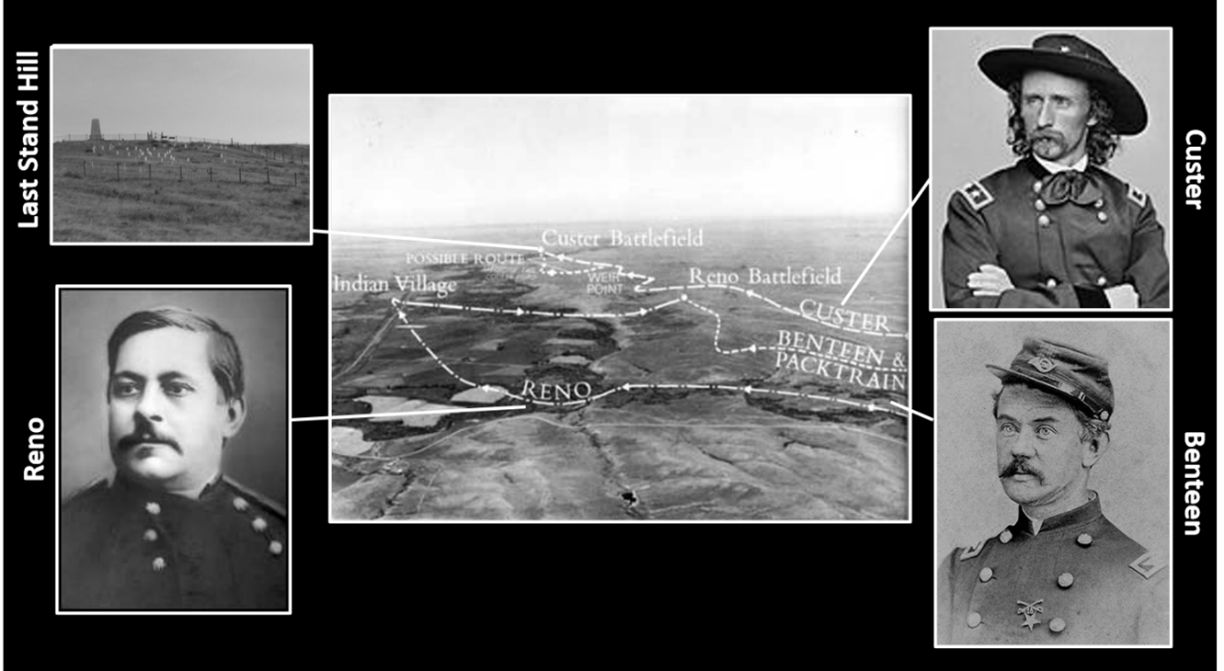 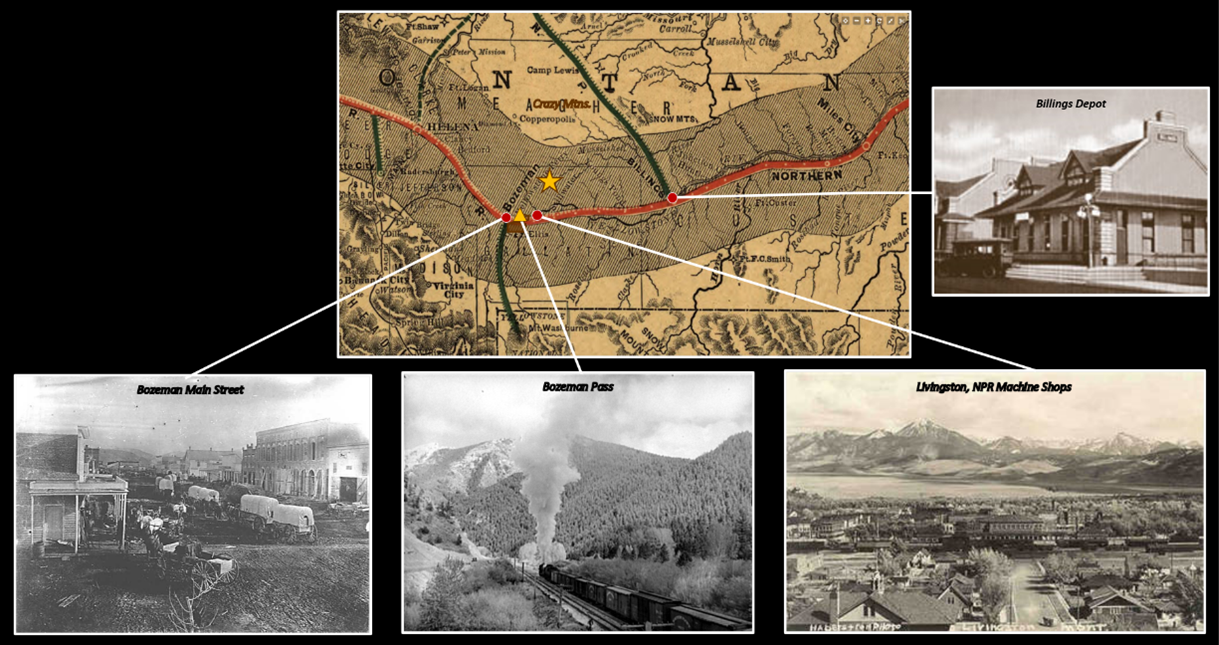 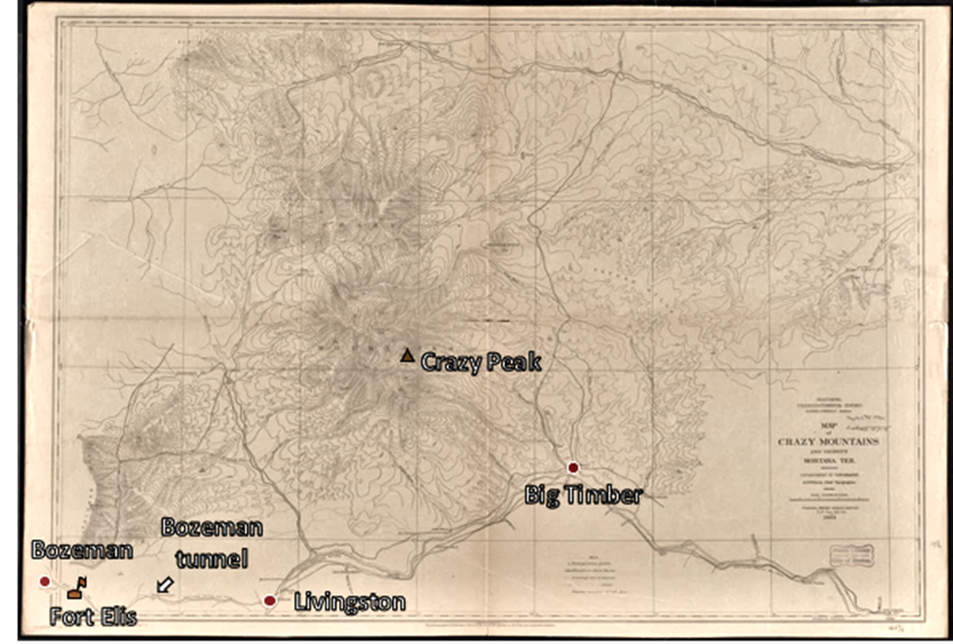 Geology of Crazy Mountains and Basin

The Crazy Mountains Basin is a 7,800 square mile asymmetric Laramide structure. It is bounded to the southeast by the Pryor Mountains, the south by the Beartooth Mountains and Nye Bowler fault zone, the southwest by the Gallatin Range and the northwest by the Big Belt Mountains. The basin trends northwest and holds about 30,000 feet of Phanerozoic sediments. 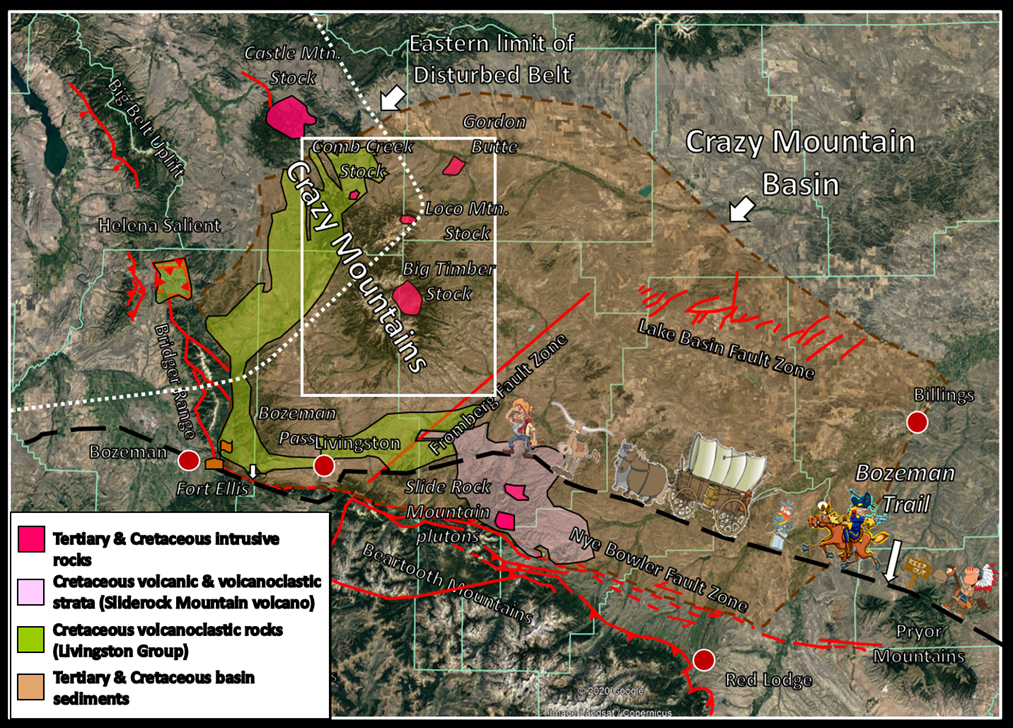 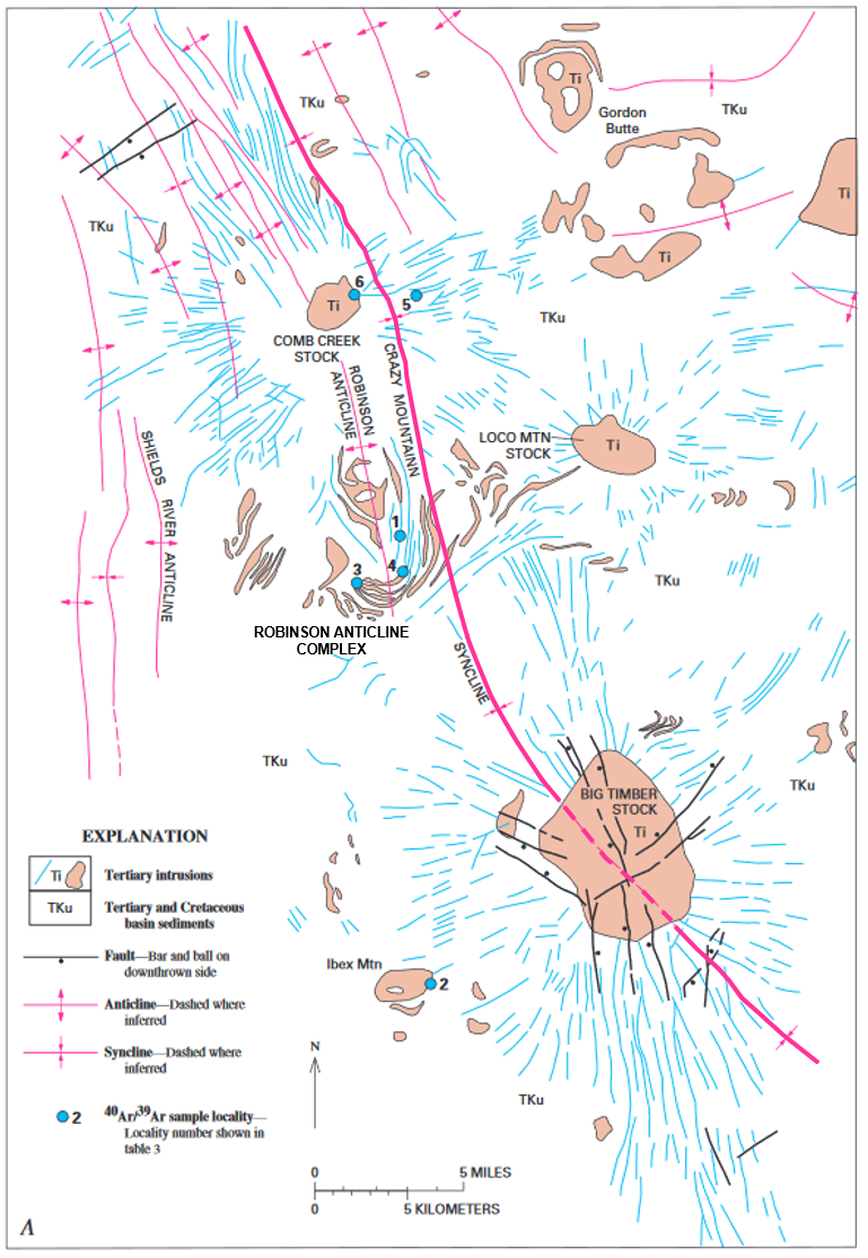 Geologic map of the southern Crazy Mountains Basin intrusive complex and associated radial dikes, south-central Montana. The syncline axis of the basin (thick pink line) and the five main igneous centers are shown: Big Timber Stock, Robison Anticline Complex, Loco Mountain Stock, Comb Creek Stock, and Gordon Butte Complex.
Image: du Bray, E.A., Harlan, S.S., and Wilson, A.B., 2006, Petrology of the Crazy Mountains dike swarm and geochronology of associated sills, south-central Montana: U.S. Geological Survey Professional Paper 1715, Fig. 1A, p. 3; https://pubs.usgs.gov/pp/2006/1715/pdf/P1715.pdf.
​The Crazy Mountains are part of the Eocene central Montana alkalic province. They are so named because the exposed igneous rocks of the province contain a high percentage of sodium and potassium alkali elements. The Tertiary province extend over 400 miles from the Sweet Grass Hills near the Canadian border, across central Montana, east of the thrust belt, to the Gallatin-Absaroka volcanic field of northwest Wyoming. They have produced a string of isolated “island” mountains rising thousands of feet above the Montana plains. 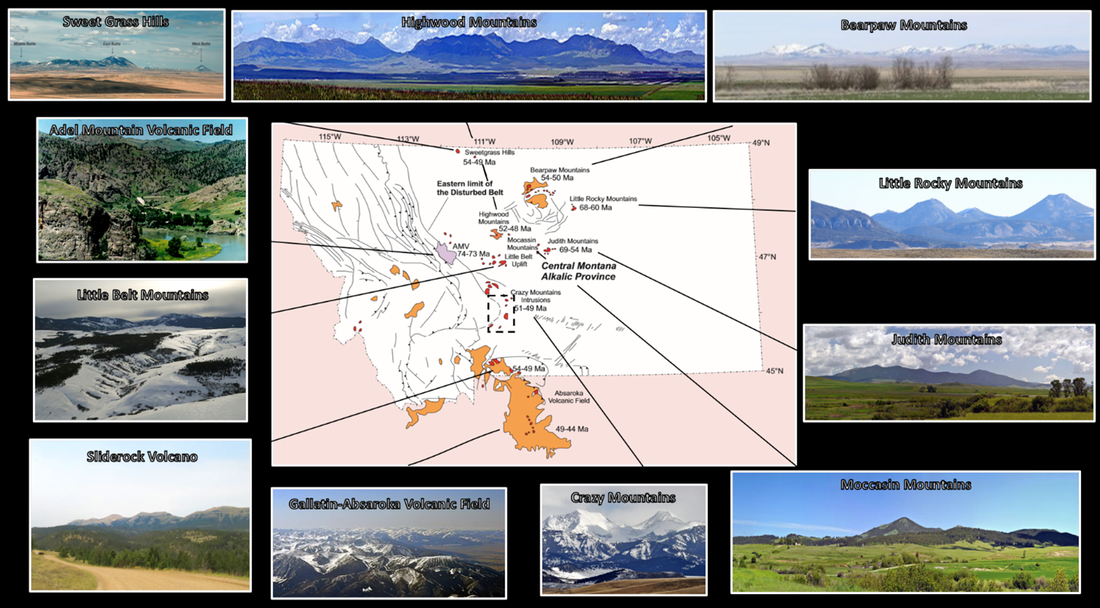 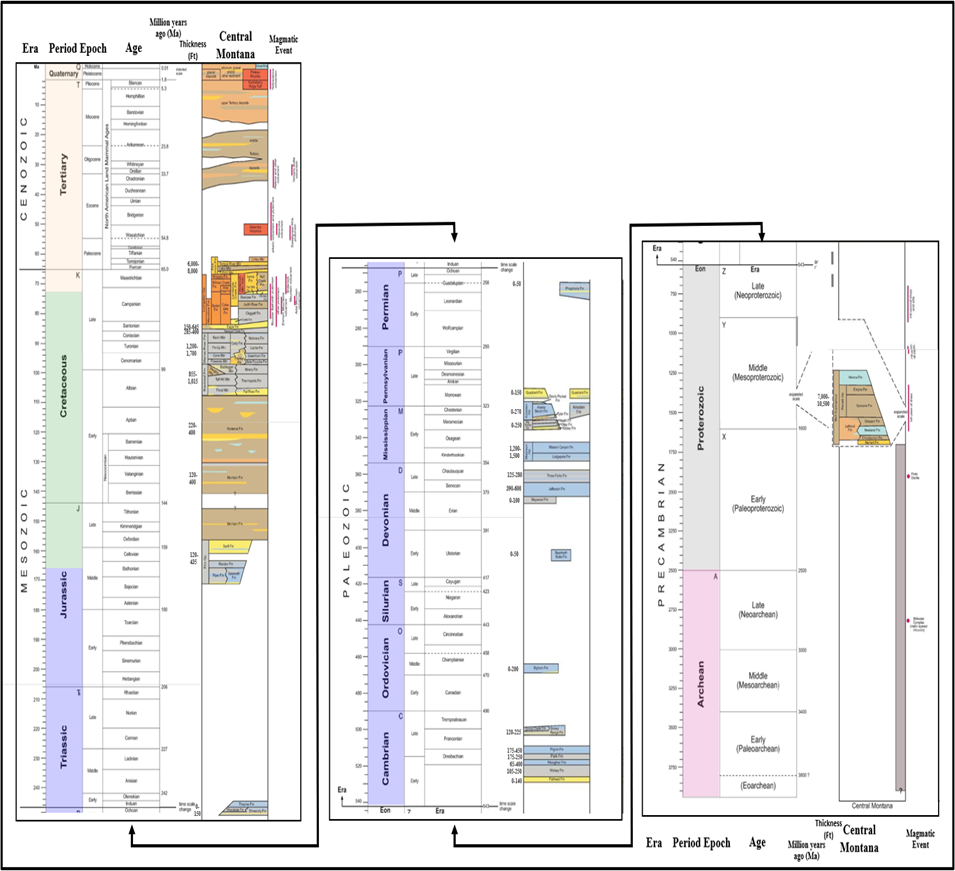 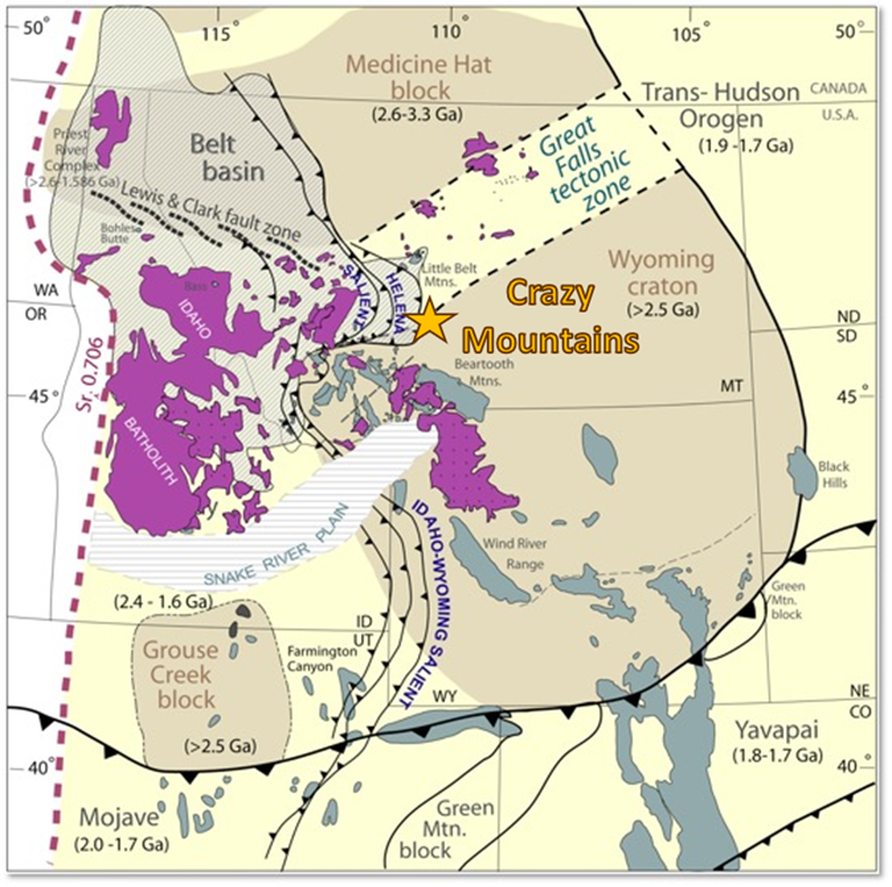 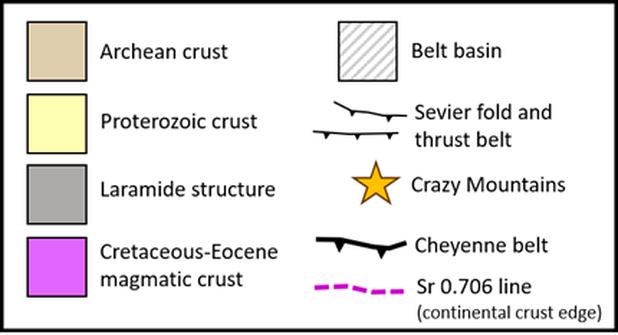 Geologic map of basement provinces and Cordilleran Thrust Belt, Northern Rocky Mountains. Crazy Mountains location at the northern margin of the Wyoming craton.
Image: After Foster, D., Mueller, P., Vogl, J., Mogk, D, and Wooden, J., Tectonic Evolution of the Western Margin of the Wyoming Craton: Implications for the Tectonic and Magmatic Evolution of the Northern Rockies: EarthScope in the Northern Rockies 2005 Workshop Poster;  http://slideplayer.com/slide/4562125/.
The Crazy Mountains Basin began as a portion of the foredeep developed east of the Mesozoic Sevier orogeny. The Montana Disturbed belt thin-skin thrusting was caused by plate subduction along western North America. Laramide tectonism began to break up the foredeep into separate basement uplifts and basins from the late Cretaceous to early Eocene.

The Fort Union Formation is the oldest exposed unit in the center of the Crazy Mountains Basin. The basin was modified by Tertiary intrusions and associated dikes of the Crazy Mountain magmatism that penetrated the Fort Union over a 2-4 million year period near the end of the early Eocene (48-52 Ma). The Big Timber intrusion consists a coarse grained diorite and gabbro that was intruded by a fine grained quartz monzodiorite. No extrusive igneous rocks are found in the Crazy Mountains. Magma movement occurred along weakness zones developed by the Proterozoic GFTZ.
​
A study of the of the mineralogy in the Big Timber Stock in the Crazy Mountain intrusion suggests a solidification depth of about 10,000 feet. This means a similar thickness of overburden has since been eroded from above the Big Timber Stock. That interpretation along with a separate study of the vitrinite reflectance profiles in oil and gas exploration wells suggests the surface above the Big Timber Stock was about 20,000 feet in present day elevations. These vitrinite reflectance well profiles suggest surface elevations along the southern edge of the basin were about 10,000 feet at the time. A large volcano may have been above the Big Timber stock that has been eroded away.
​
On the east edge of the Basin, shallow gas has been produced from upper Cretaceous reservoirs in three conventional fields south of the Lake Basin fault zone. The Cretaceous Niobrara (Cody Shale) and Mowry marine source rocks that are rich in oil-prone organic matter in the Powder River Basin 250 miles to the southeast are more terrestrial and gas prone with lower organic content in the Crazy Mountains Basin. Cretaceous source rocks in the Crazy Mountains Basin are probably similar to the lower quality Cretaceous source rock in the adjacent Big Horn Basin 125 miles to the southeast. The Crazy Mountains Basin is hotter than other basins in the Rockies and the Cretaceous in the deeper parts of the basin may be gas charged. The nearby Bighorn Basin has giant oil fields in the Paleozoic rocks of the Phosphoria, Tensleep and Madison Formations in structural closures (anticlines). Oil in these large fields was sourced from the Permian Phosphoria in western Wyoming and easternmost Idaho. The Crazy Mountains Basin either did not receive this massive migration of Phosphoria oil from the west and southwest, and/or the top seal rocks did not trap and contain the oil in the Paleozoic reservoir rocks. The Crazy Mountains Basin is considered noncommercial by most oil and gas companies. 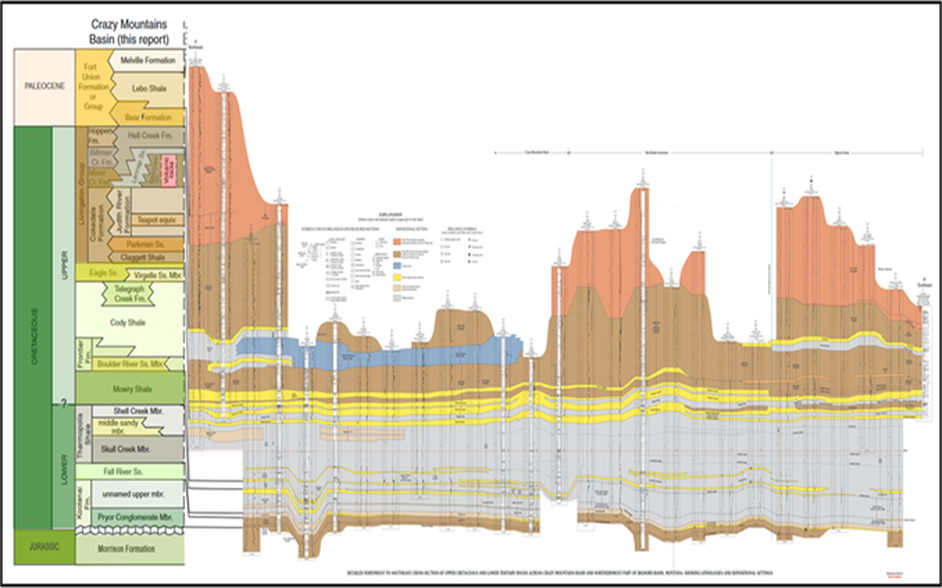 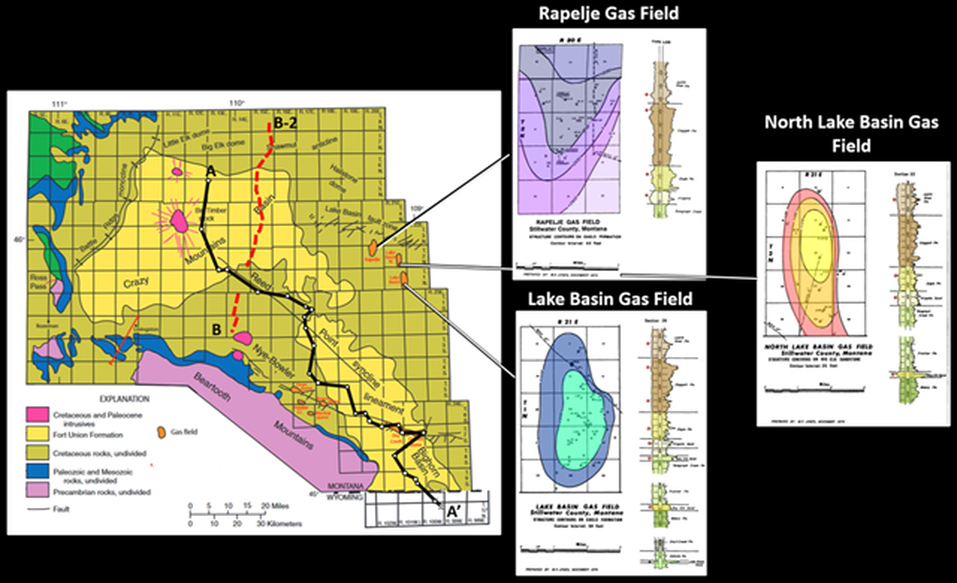 Composite seismic line B and B-2 runs from the south edge of Crazy Mountains Basin on left to the north edge of the basin on right. The B2 portion of the line follows a similar trend as the northernmost part of cross section A-A’ approximately two townships to the east of the cross section. Gap between lines is the community of Big Timber, southeast of Big Timber stock. Location is shown in red dash on index map (above) and in green and blue line on the Madison Structure map (below).
Image: Taylor, J.D., 2003, Basin Structure from Two-Dimensional Seismic Reflection Data, Crazy Mountains Basin, Montana, Plate 3 & 4; https://pubs.usgs.gov/sir/2004/5091/downloads/SIR04-5091.pdf or https://www.osti.gov/servlets/purl/834350; Stryker, L.P., 2009, Images of America: Big Timber: Fig. on p. 9; 2020: https://cityofbigtimber.com/. 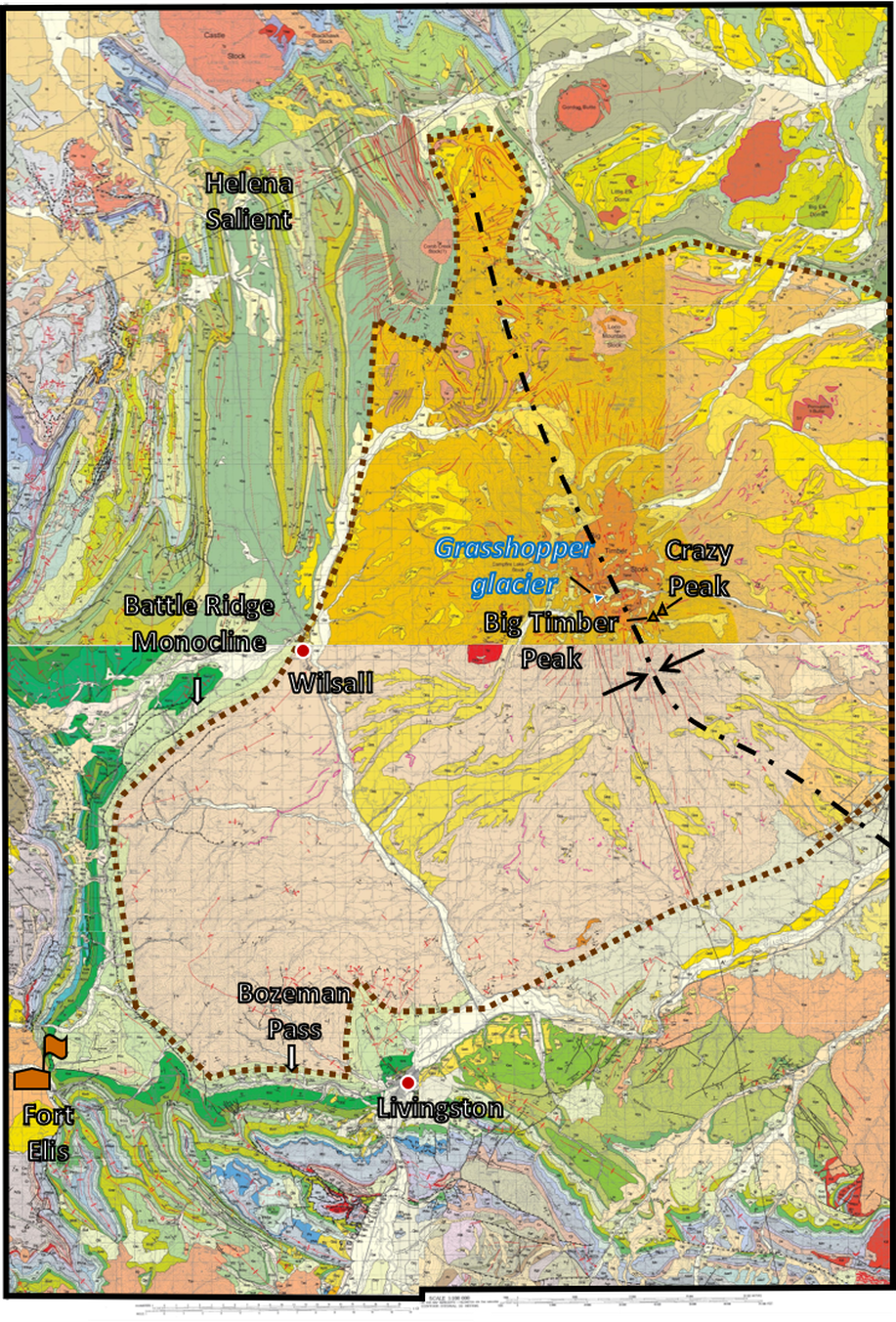 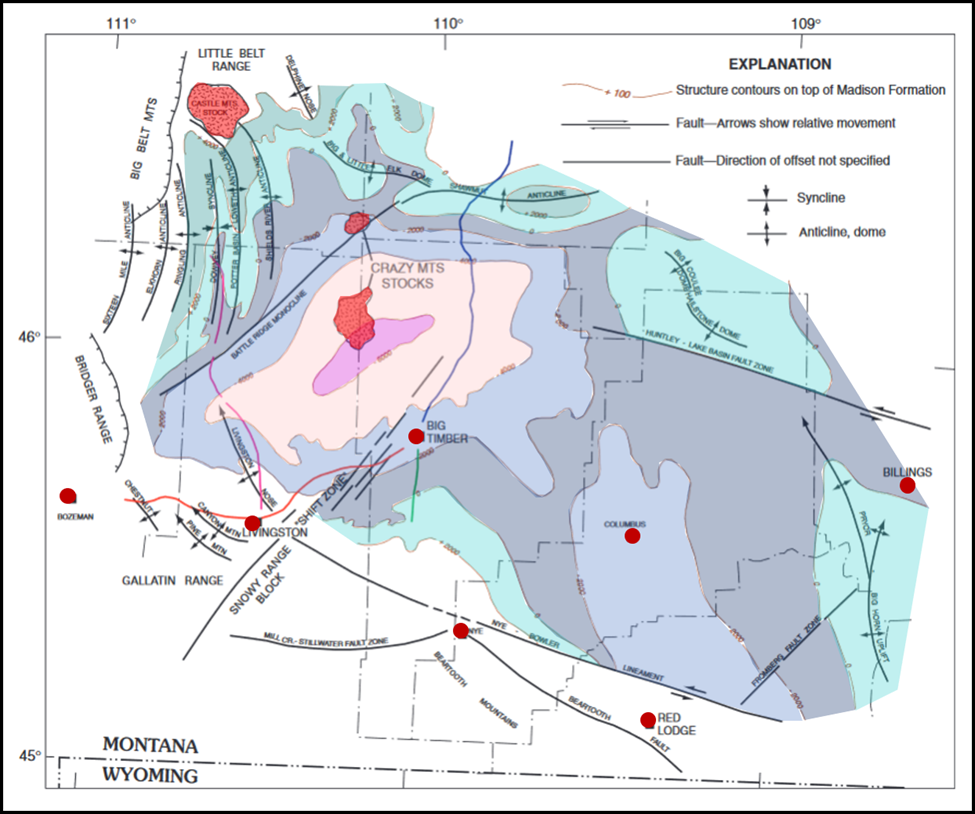 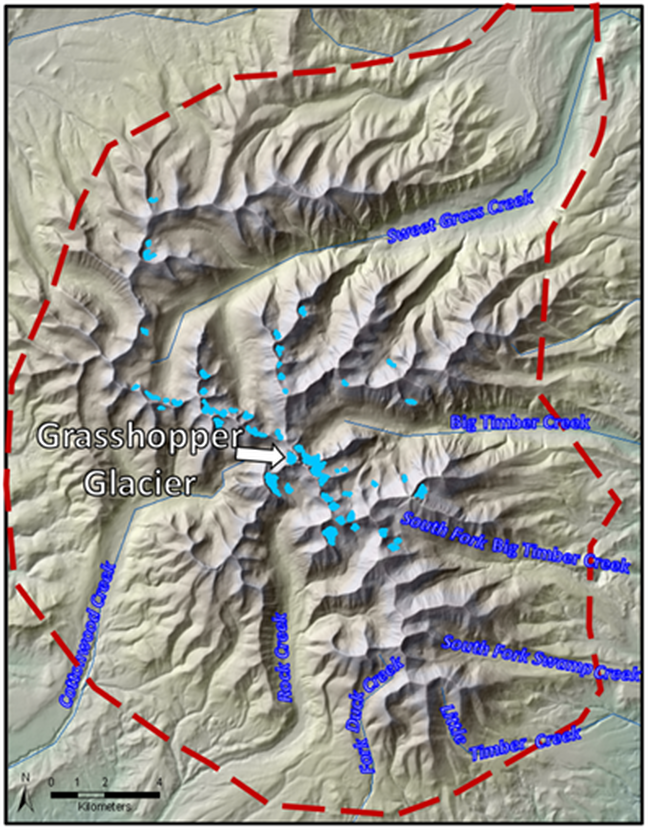 This pristine area is excellent for hiking, camping and horseback riding. The Crazies are part of the Gallatin and Lewis & Clark National Forests. The mountains are surrounded by private property (legacy of the Northern Pacific land grant).  Two primary public roads that provide access are Cottonwood Creek Road (FR 198) from the west and Big Timber Creek Road (FR 197) to the east. The U.S. Forest Service maintains trail and land ownership maps. Another excellent source is the Hiking Project website. They have an interactive map that includes difficulty, distance, trail type, rating, and elevation links (https://www.hikingproject.com/directory/8023966/crazy-mountains).

Our recommendation is a gorgeous hike up the Big Timber Creek Trail with a side hike to Blue and Granite Lakes. Total mileage to Blue Lake is about eight miles out and back with almost 2,000 vertical feet of elevation gain. Parts of this hike are strenuous. The hike has a waterfall just a short distance from the trailhead. Alpine lakes and surrounding peaks are stunning. Note that every other section is a checkerboard of private and Forest Service land. Directions: Take US 191 north out of Big Timber 8 miles, turn left on Wormser Loop Road and drive 3.4 miles, turn left on Big Timber Canyon Road and drive 13 miles to the end of the road near Half Moon Campground. Take bear spray and enjoy! 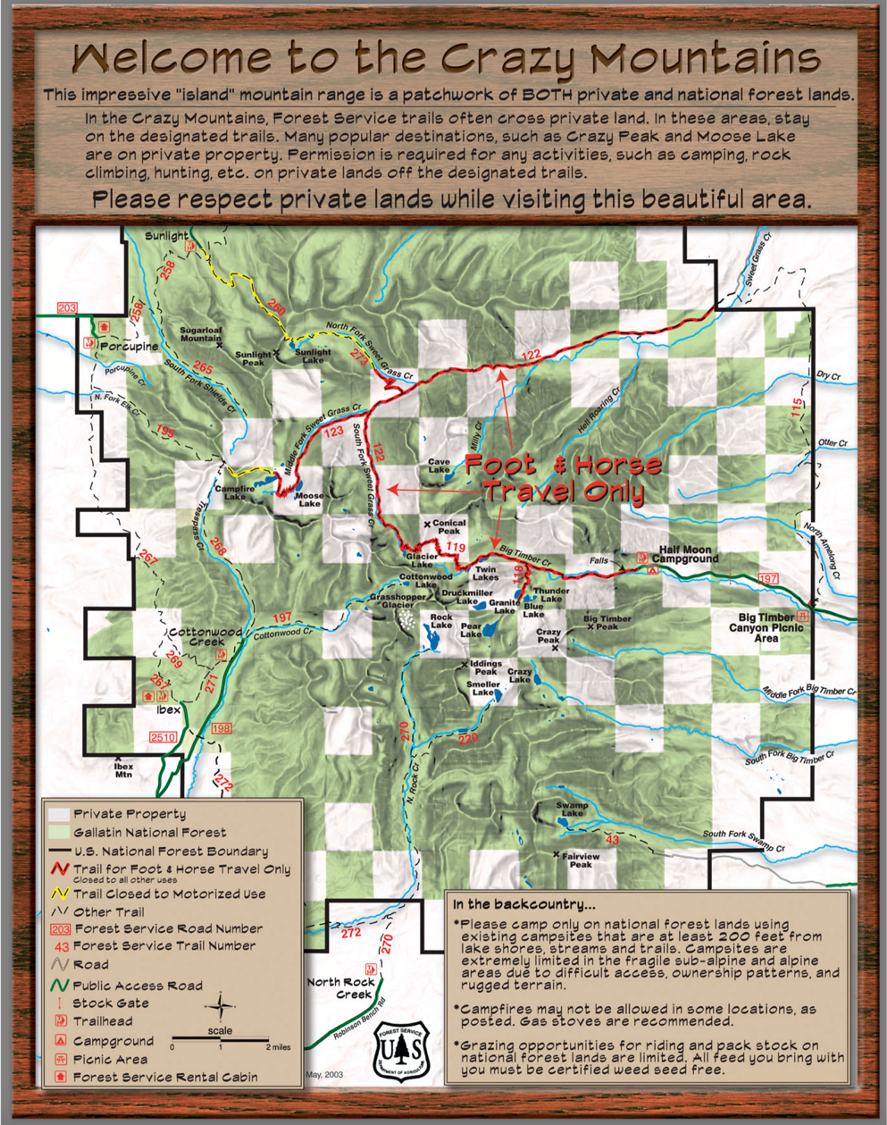 Natural Bridge Falls is 26 miles southwest of Big Timber on MT-298. The 25 foot limestone arch that gave the falls its name collapsed in 1988. The park is in the Boulder River valley where the cataract is 105 feet at high water flow. At low water, the river disappears from the surface to emerge out of limestone caves at the falls scarp face. Since the last ice age the river has eroded into the Madison Limestone Formation karst breccia zone at the base of the Little Tongue Member (see https://www.geowyo.com/bighorn-canyon.html). This spectacular waterfall is an easy 0.7 mile out & back hike from the parking lot. The Boulder River is a renowned trout fishery seen in the movie “A River Runs Through It” and the park is open year round. 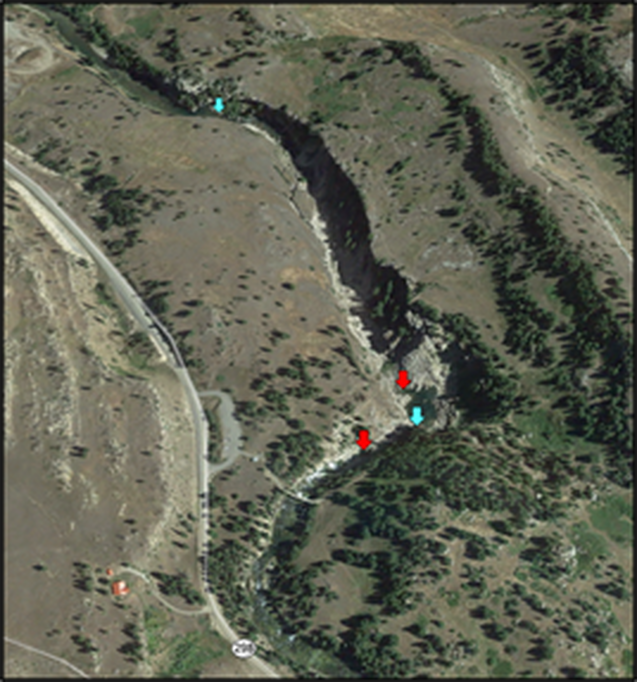