Shirley Basin townsite was a remote uranium mining camp located about 40 miles south of Casper on the isolated grasslands of south-central Wyoming. It is a desolate, blustery sagebrush landscape at 7,100 foot above sea level, where winter wind chills can reach 100 degrees below zero. Molly Ivins described the town as ''a moonscape capped with snow, a huge clot of trailers, one after another, and nothing else'' (Ivins, M., March 21, 1978, New York Times). Ivins’ article inspired the off-off-Broadway comedy play “Shirley Basin” about the women of the uranium mining town. 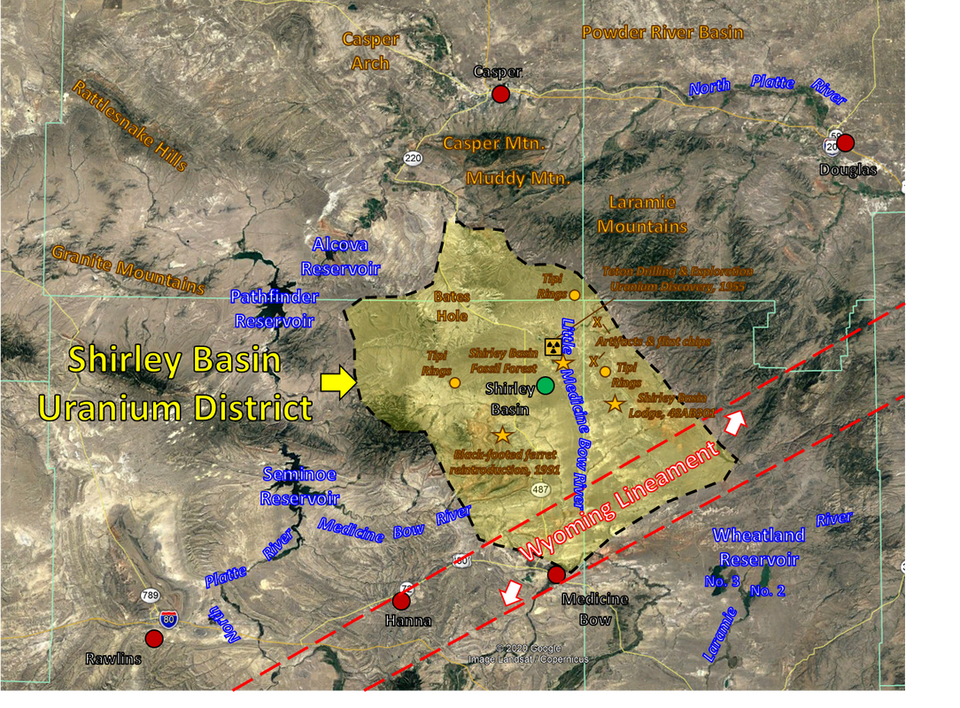 Region surrounding Shirley Basin (black dashed line) and the abandoned mining community of the same name (green dot). The mining boom ended, and the town was abandoned in 1992. Basin sites of interest are shown by gold stars.
Image: Google Earth
Shirley Basin (not the townsite) is a northwest trending asymmetric basin that formed by subduction-driven Late Cretaceous to early Tertiary tectonism called the Laramide Orogeny. Laramide structuring created the basement cored uplifts that surround the basin. The basin is named for the Shirley Mountains that lie on the southwestern margin. The mountains were named after freighter John Shirley who hauled supplies to homesteaders there in the mid-1800’s (Shirley’s Mountains). The Granite Mountains (aka Sweetwater Arch) lie to the west and Bates Hole, a prominent erosional feature drained by Stinking Creek, is the north margin of the basin. The Laramie Range marks the northeastern and eastern border. Northeast-trending Flat Top anticline is the basin’s structural divide with the Laramie Basin to the south. This feature is part of the Wyoming Lineament which is a broad zone of east northeast-trending folds above a major Precambrian shear zone in central Wyoming formed during the assembly of the Wyoming Craton (Ransome, 1915, Blackstone, 1983).
​
Uranium deposits in the Eocene Wind River Formation were discovered by Teton Exploration in 1955. The leasing boom took off in 1957 with several companies acquiring leases. Utah Mining began underground mining in 1959 in the northwestern part of the district. In 1964 they converted to in-situ recovery (ISR). This was the first use of the ISR uranium mining technique in the United States. After 1968, Utah Mining began strip mining of the ore. Uranium ore was shipped to the Lucky Mc mill in the Gas Hills, 145 miles west, before an onsite mill was constructed in 1969. The mill began operations in 1971. Since the 1990s all uranium mining in Wyoming uses the ISR process (also called in-situ leach, ISL).

Petrotomics began strip mining in the southern portion of the district in 1960. The company was a partnership between Kerr-McGee Oil Industries, Inc., Getty Oil Company, Skelly Oil Company and Tidewater Oil Company. Ore was processed offsite until a 500-ton per day mill was constructed in 1962.
​
The district produced 18,080,489 tons of uranium ore from 1959 to 1992. Petrotomics housed workers in onsite sleeping quarters while Utah Mining housed its workers in a nearby trailer site named Shirley Basin. The camp was relocated in 1970 from its original location adjacent to the mines to make room for a Utah Mining mill and mining of additional ore deposits by Petrotomics. The new townsite was about six miles south of mine operations. 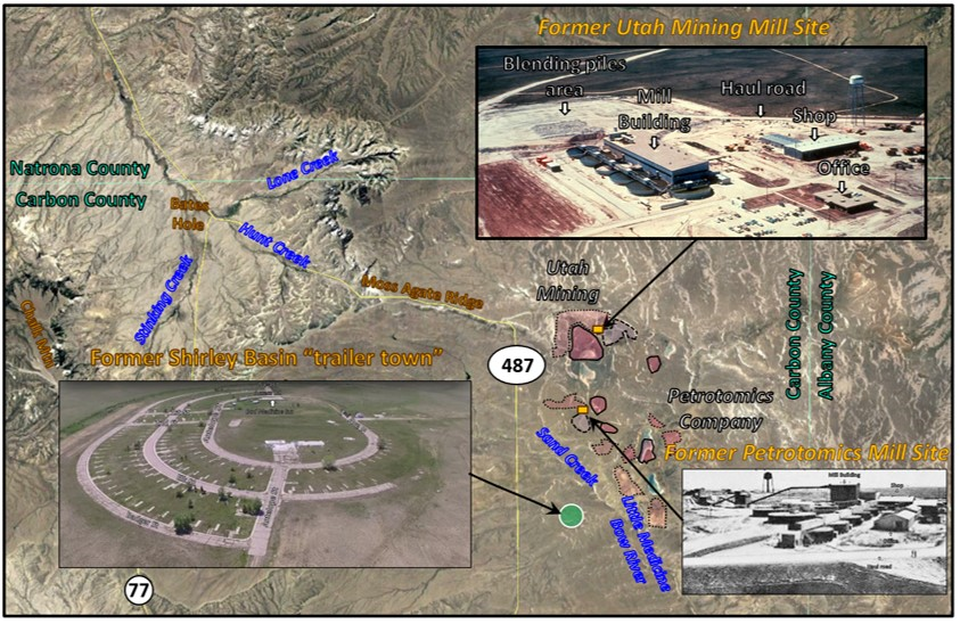 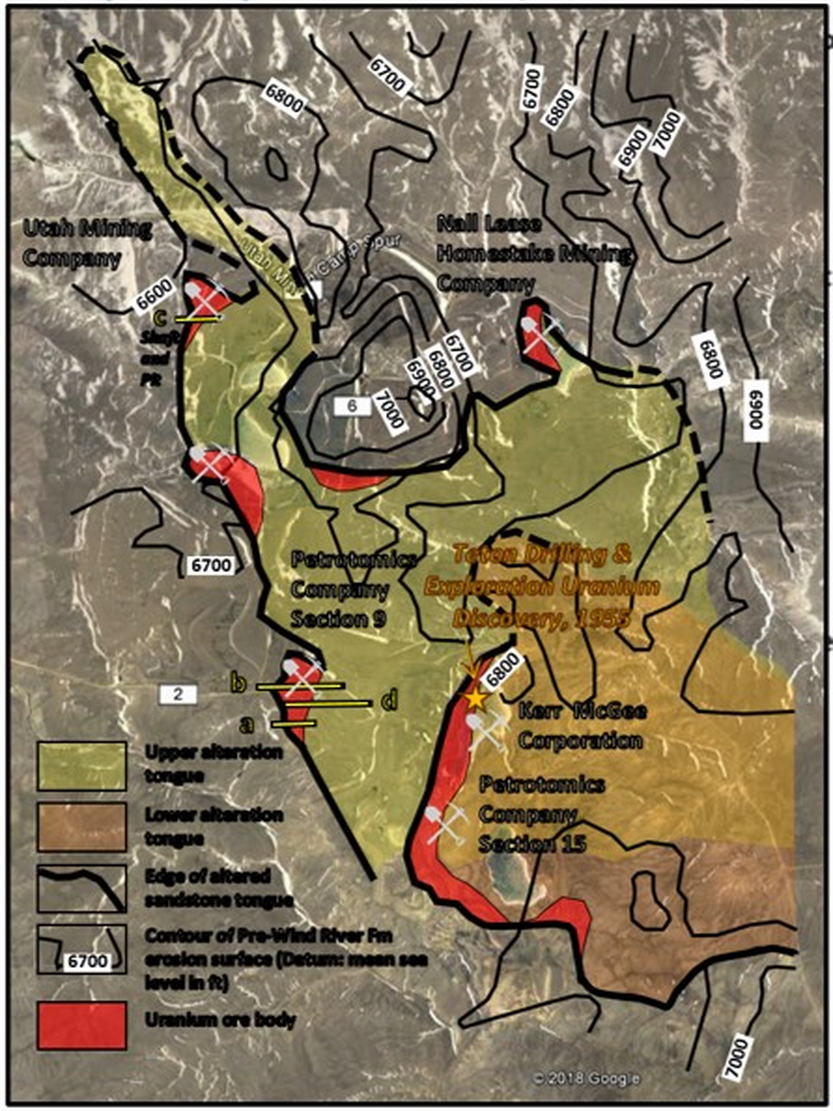 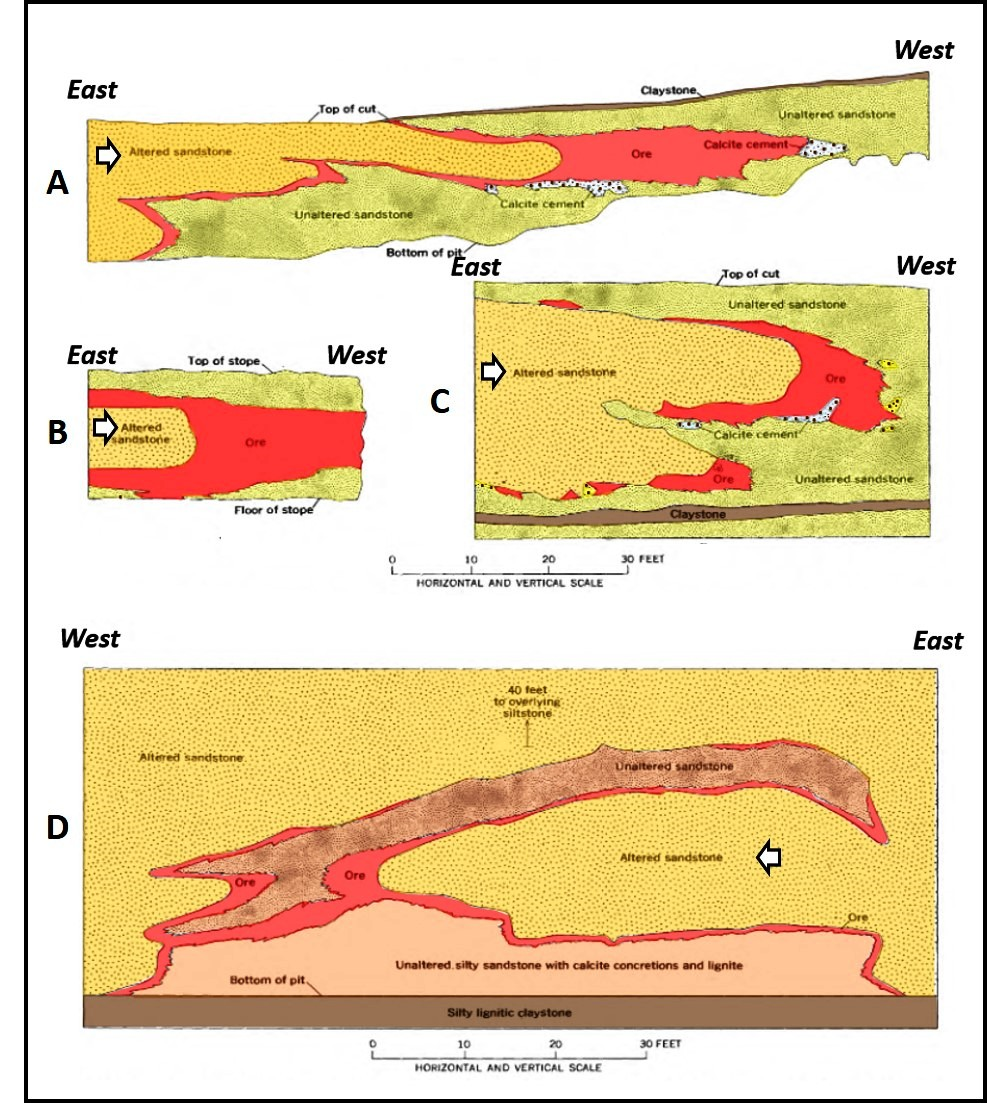 The Shirley, Hanna and Laramie Basins were part of a single continuous basin area in the Sevier foreland prior to the Laramide Orogeny. At the outset of Laramide mountain building, the area was divided into separate intermontane basins by uplifts. The Phase 1 and 2 units (more than 6,300 feet thick) were tilted, folded, eroded, and developed an angular unconformity on pre-Tertiary rocks. The erosional topography influenced the deposition of nearly flat-lying Tertiary sediments (dip: < 2 degrees to the northeast). Eastward flowing streams were diverted northwestward by topography and dropped their sediment load. Sandstones in the Wind River Formation are the primary host of uranium deposits in the Shirley Basin. Organic material from the Eocene Forests were deposited in the Wind River Sandstones.  This organic material supplied the reducing chemical environment to develop roll-fronts from the uranium-bearing groundwater. The claystone of the upper Wind River Formation and the underlying Cretaceous Steele and Niobrara Shales were the confining units for the ore bodies.
​
The uranium source for the ore deposits in the Wind River Formation is most likely from granitic rocks and arkosic material from the Granite, Shirley, and Laramie Mountains. Some uranium may have come from the volcanic ash in the overlying White River Formation. The roll-front model of uranium ore deposition (Love, J.D., 1952, Preliminary Report on Uranium Deposits in the Pumpkin Buttes Area, Powder River Basin, Wyoming: U.S. Geological Survey Circular 176) was enhanced and successfully applied by Utah Mining for uranium exploration and mining in the Northern Uranium District (See https://www.geowyo.com/gas-hills--crooks-gap-uranium.html). 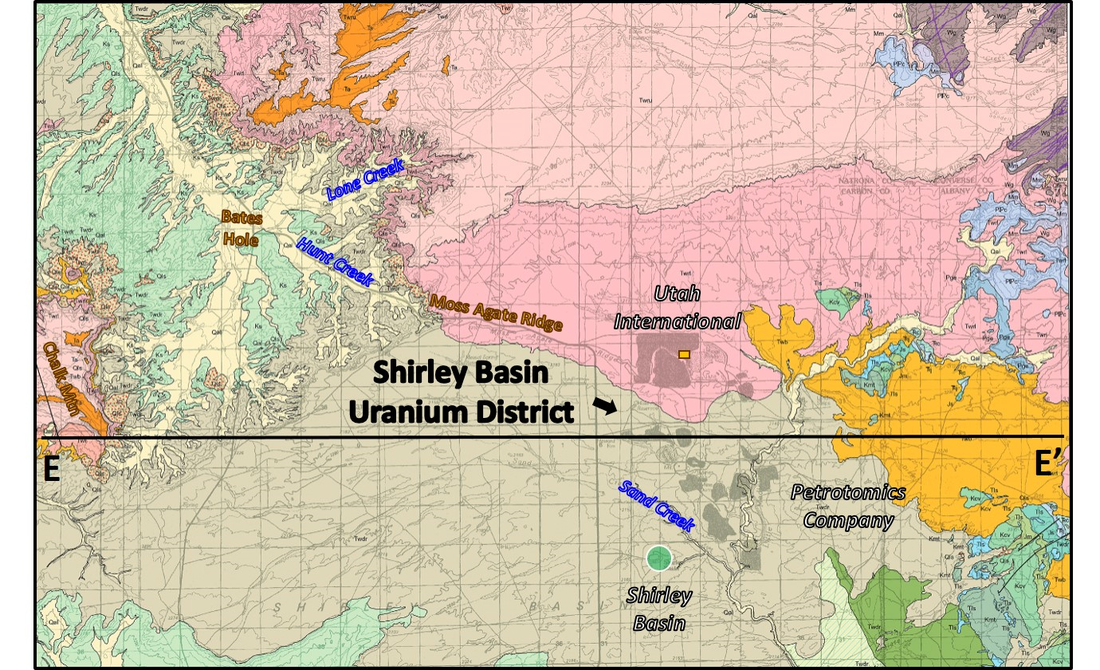 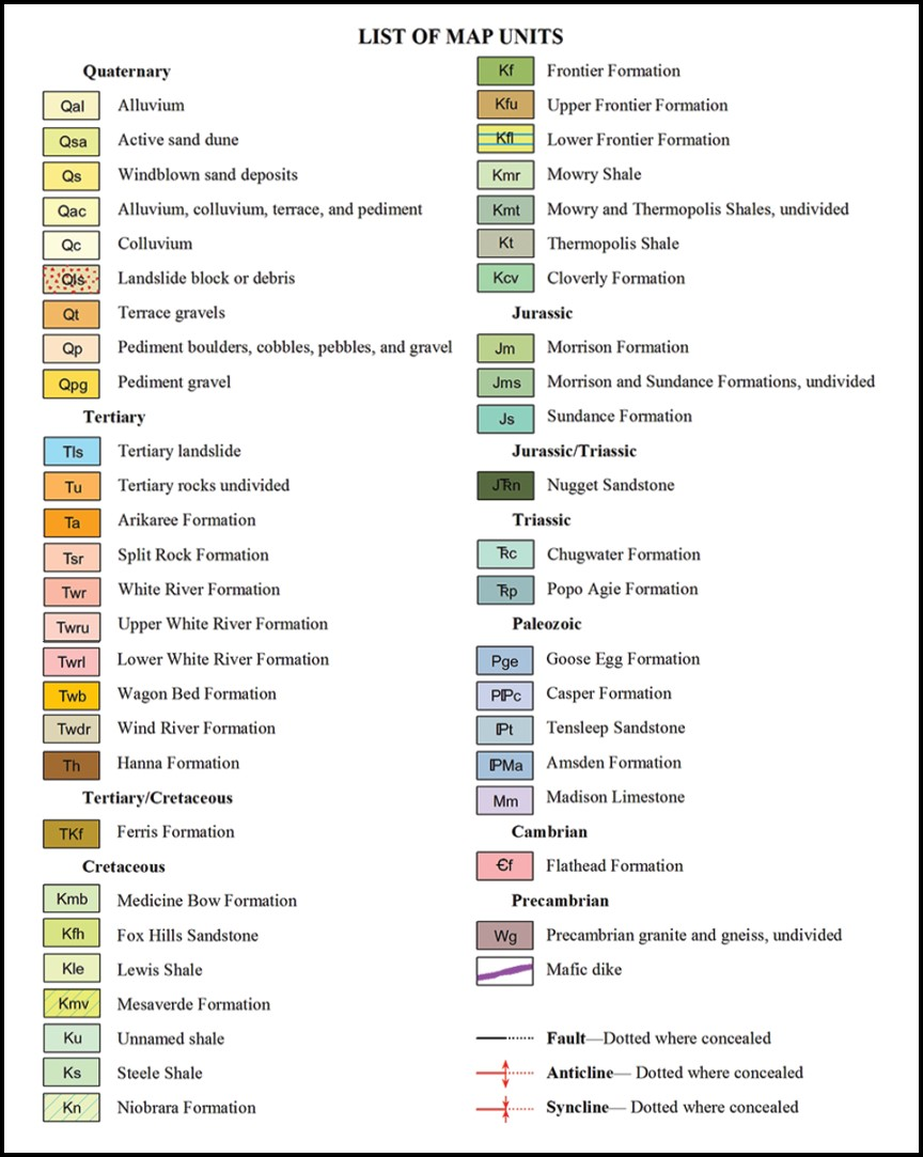 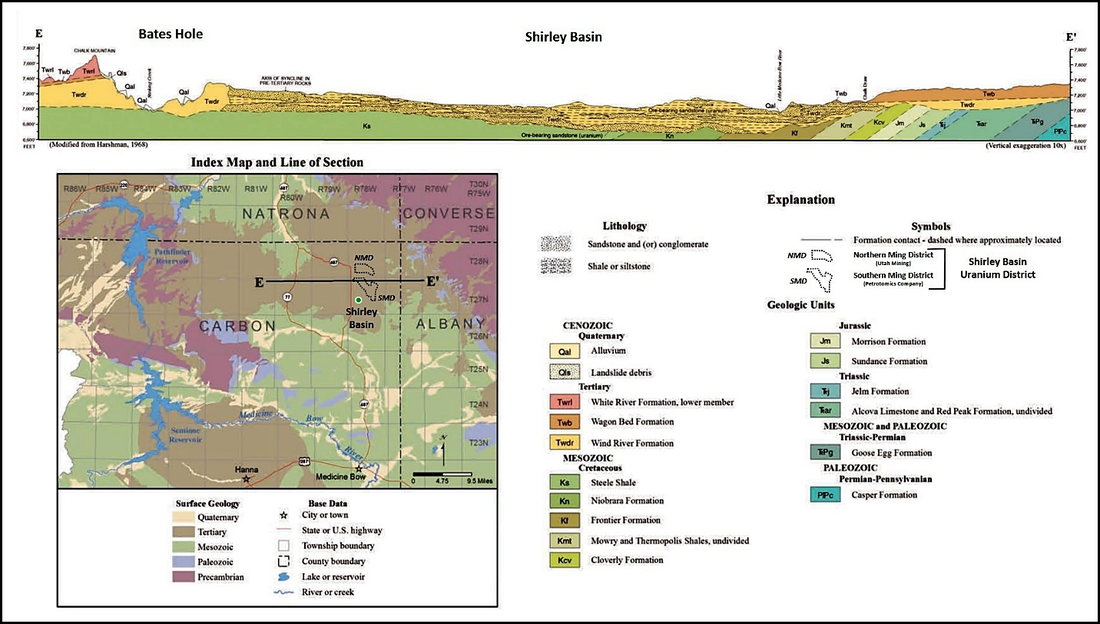 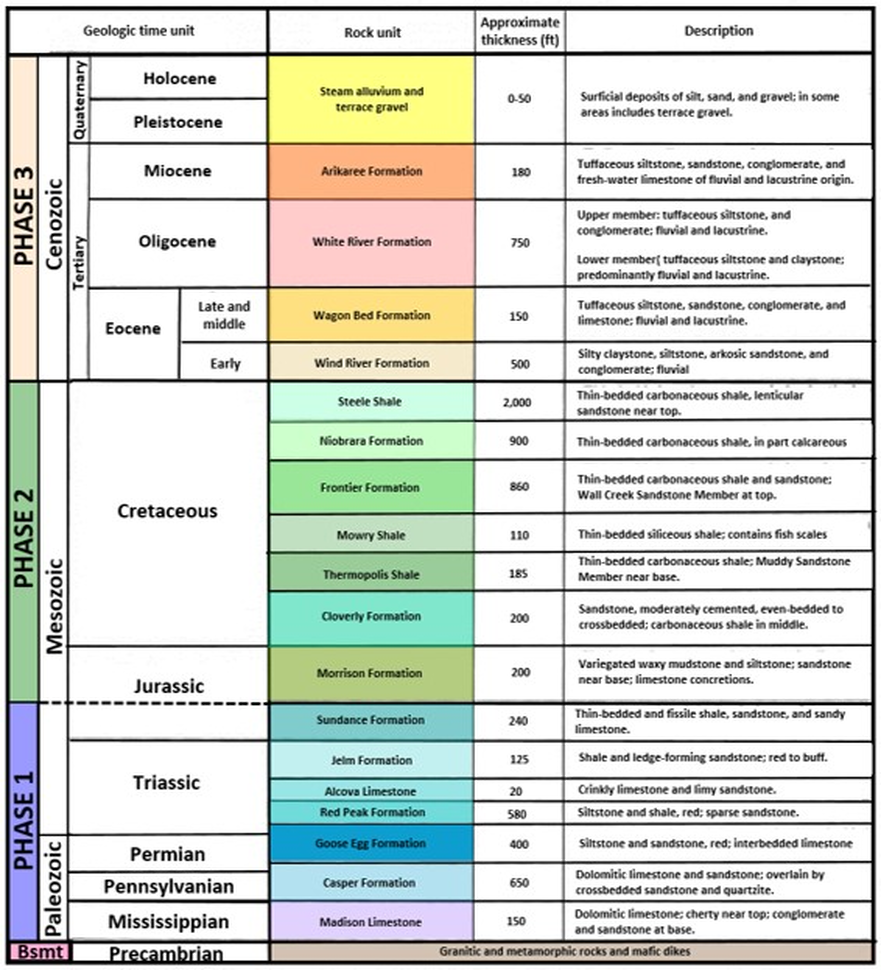 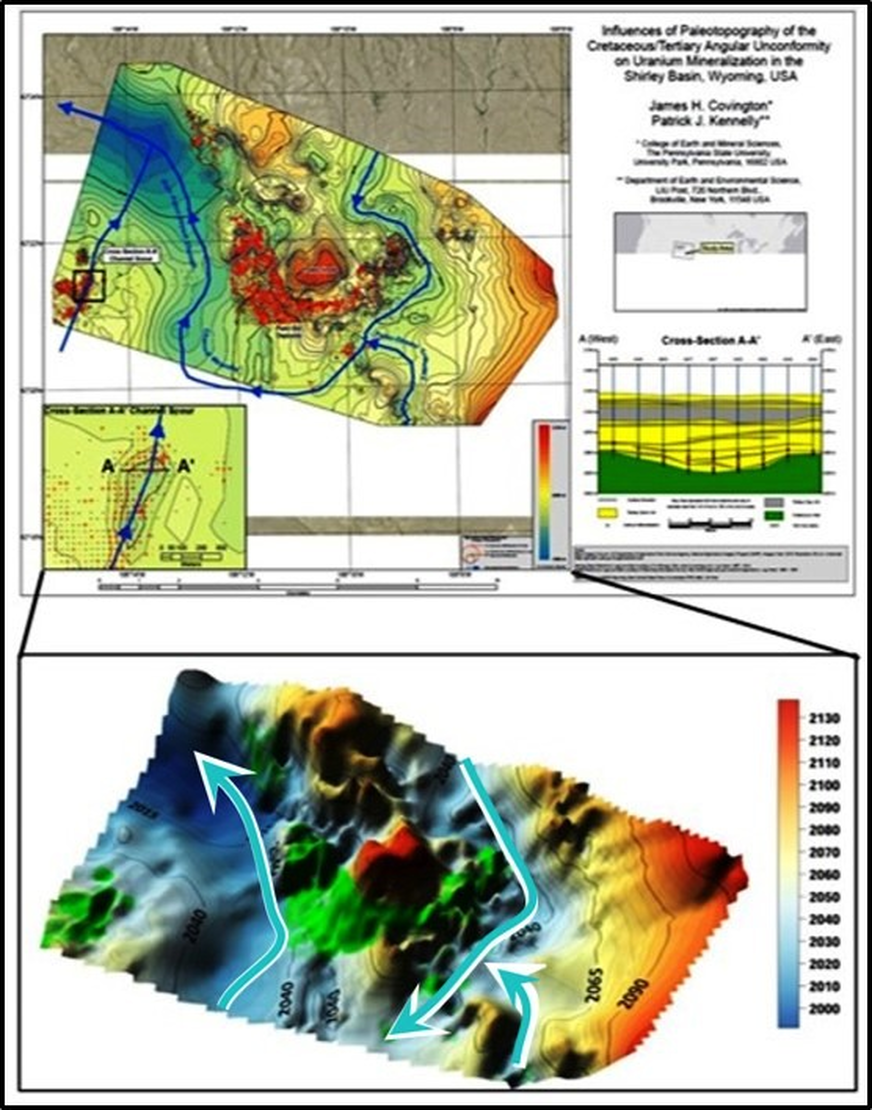 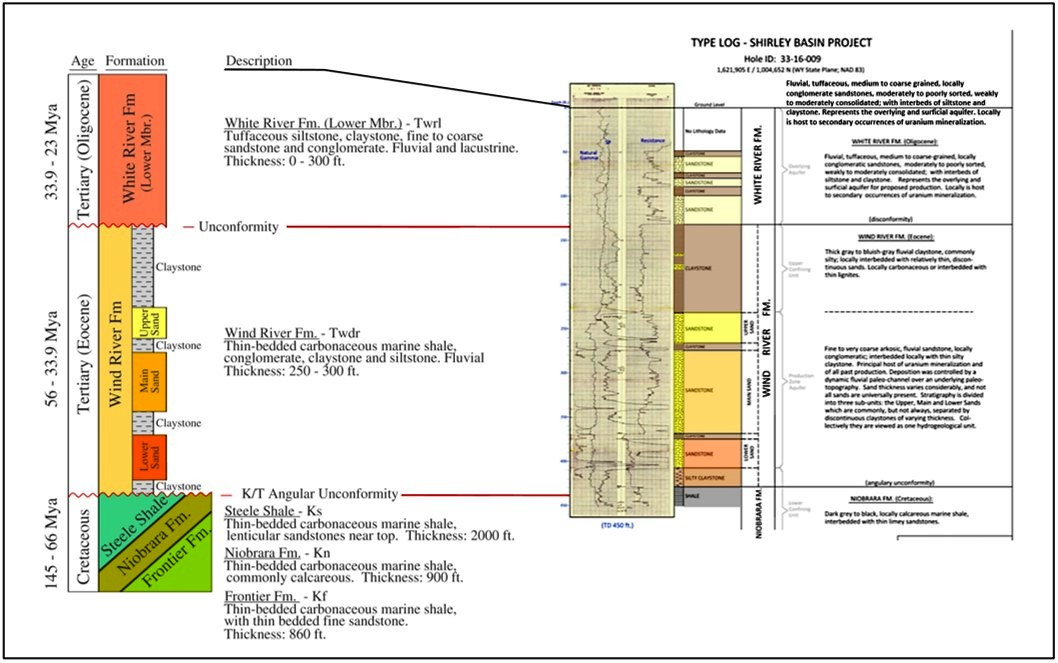 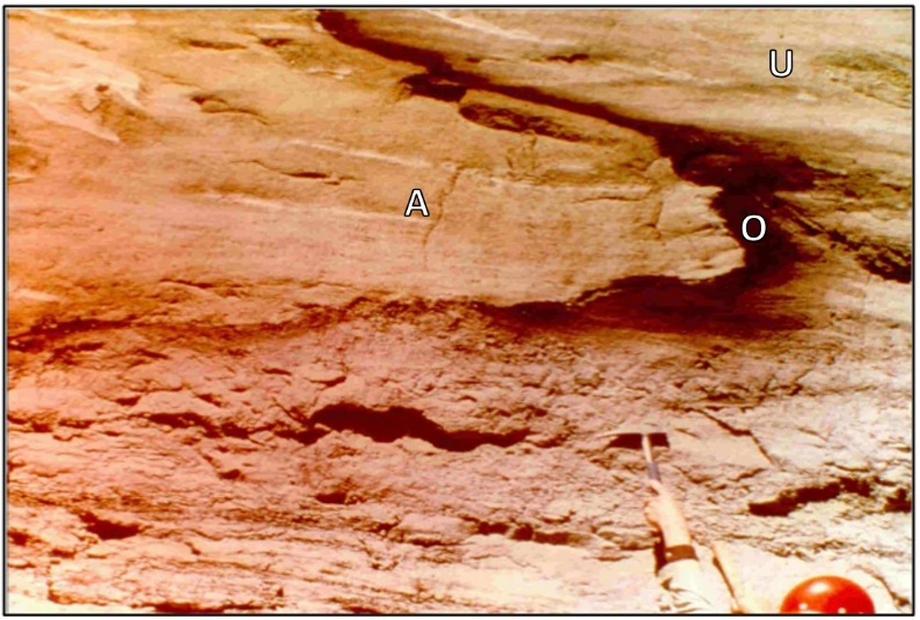 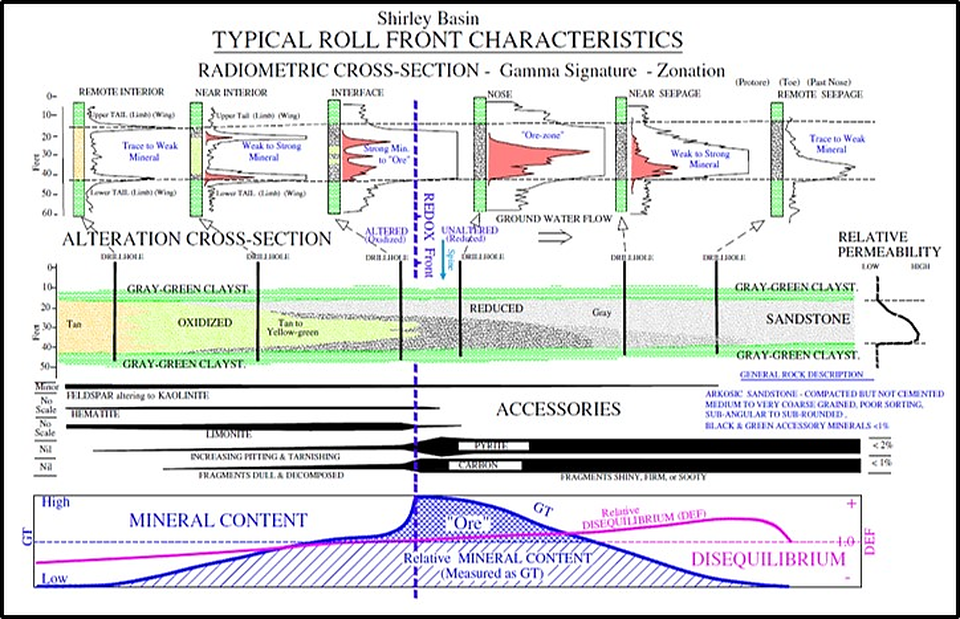 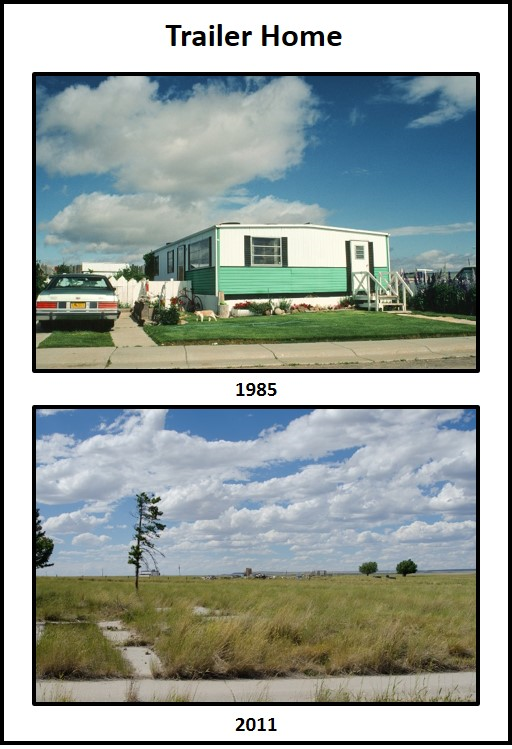 Then and now views of company-owned Shirley Basin trailer park during and after the mining boom (abandoned, 1992). The Bad Medicine Inn hosted a grocery store, post office, bank, gas station, mechanic shop, cafe, and bar. The latter facility served as the center of the community’s social life.
Image: After Heidpriem, J., 2011, Shirley Basin; https://cargocollective.com/josephineheidepriem/SHIRLEY-BASIN.
Shirley Basin uranium mining district was the second largest operation in Wyoming from 1960s to 1990s (Gas Hills District was the most productive). The basin mines were closed in 1992 due to economic factors following Three Mile Island accident (1979), not for a lack of resource. In 2015, UR-Energy proposed to reopen the mine using in-situ recovery technique. The company estimates total measured plus indicated uranium resources (0.23% average grade) to be over 1.9 million short tons of ore (8.8 million pounds of U3O8).  This compares to Shirley Basin historical uranium production (1960 to 1992) of 51 million pounds of U3O8.  Wyoming is the largest producer and contains the greatest uranium ore reserves in the United States. But, until mining is renewed, Shirley Basin will remain part of Wyoming’s “Big Empty.”

Left: Bates Hole escarpment, northern margin, Shirley Basin; Right: Reclaimed site at South Shirley Basin Uranium District.
Image: Left: Image: Travsky, A., 2019, Shirley Basin – embracing the value of empty: Wyoming Tribune Eagle; https://www.wyomingnews.com/shirley-basin-embracing-the-value-of-empty/article_fa7964b7-d195-5e0b-af72-4846af429b88.html;
​Right: Wilson, A.B., 2015, Uranium in the Wyoming Landscape Conservation Initiative Study Area, Southwestern Wyoming: U.S. Geological Survey Open-File Report 2014-1123, Fig. 6B, p. 23;    https://pubs.usgs.gov/of/2014/1123/pdf/ofr20141123.pdf.
Remains of an Eocene fossil forest are in the Wind River Formation to the east of the mining district. The area was home to a swampy, humid forest 50 million years ago. Most of the logs and larger petrified specimens were removed by commercial collectors during the 1930s to 1950s. Small pieces of petrified wood can still be found in Sections 11-14, Township 27 North, Range 78 West. The specimens usually are shades of white, brown and black that sometimes show fluorescence. Twenty-five pounds of wood may be collected on BLM lands without a permit in one day. One person is limited to 250 pounds in a single year. 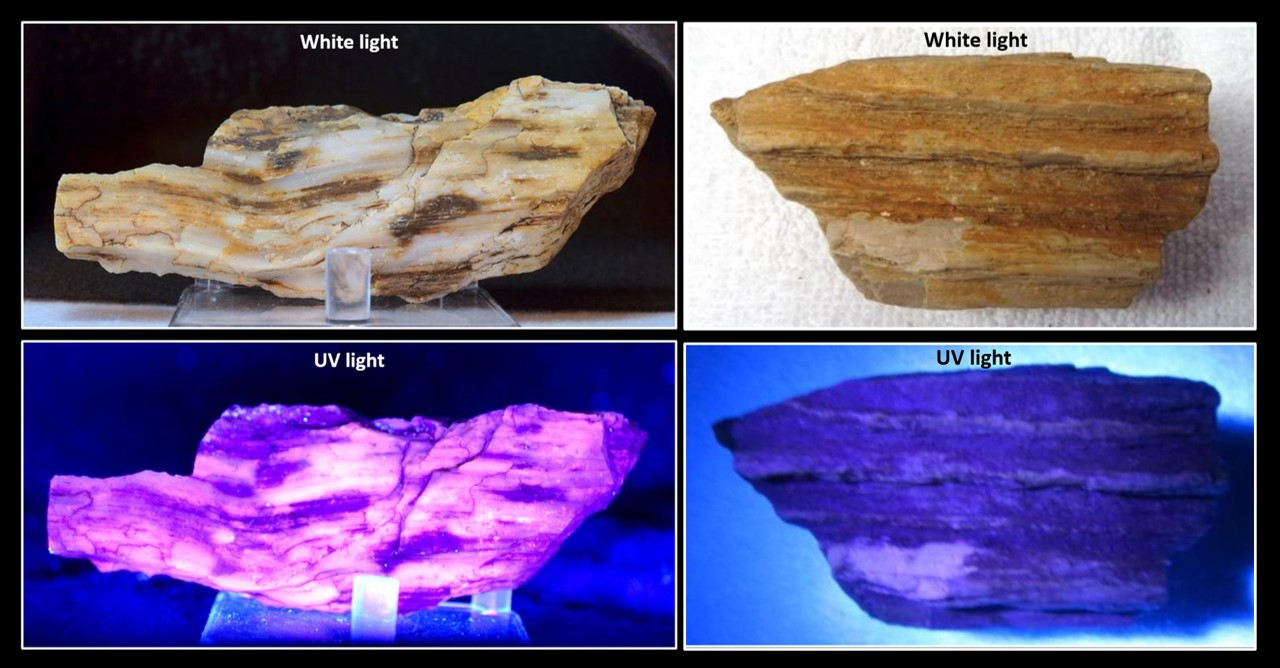 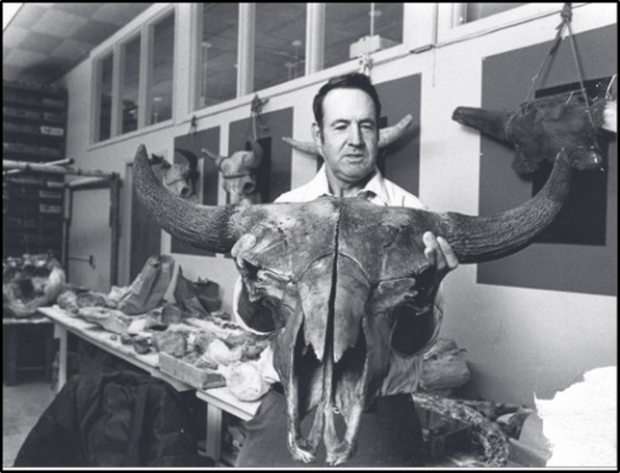 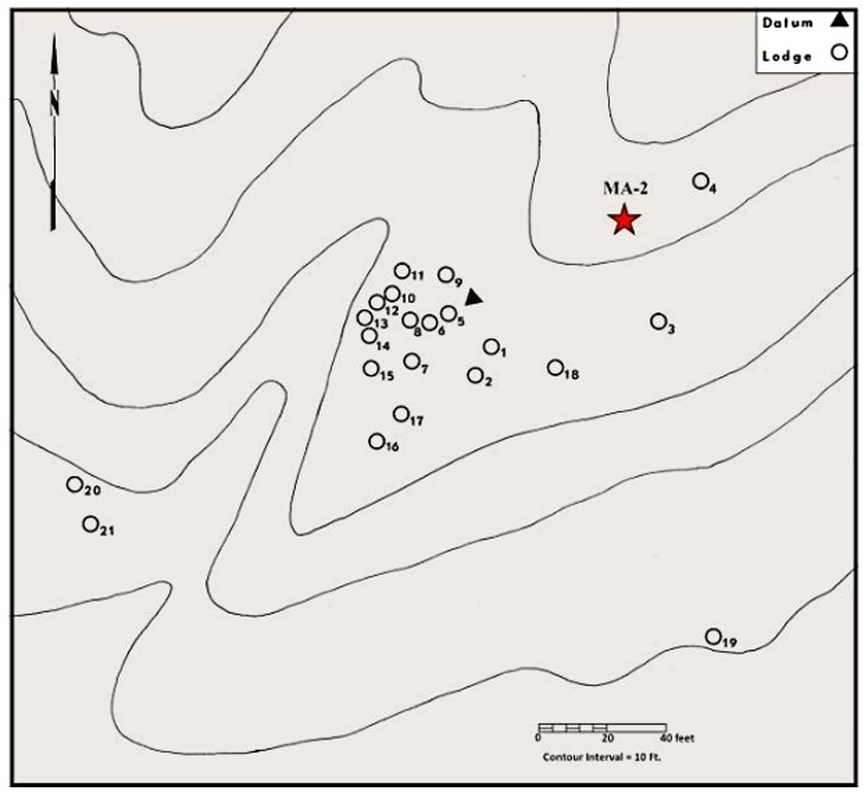 ​The black-footed ferret (Mustela nigripes) was listed as an endangered species with the passage of the Endangered Species Act in 1973. Ferret extinction was declared in 1979 because no ferret had been seen in the wild throughout the 1970s. Several states offered rewards for sighting and location of a black-footed ferret. Reward posters were found in post offices, public buildings, and businesses. In 1981, the Hogg ranch’s dog (Shep) brought a black-footed ferret carcass to their porch near Meeteetse. A “business” (group of ferrets) was discovered in a white-tailed prairie dog town on the nearby Pitchfork Ranch. Coincidentally at the turn of the century, the Pitchfork Ranch was also home to one of the last free-roaming bison herds in North America.

Black-footed ferret wanted posters, 1974-1989.
Image: Hanebury, L.R. and Biggins, D.E., 2006, A History of Searches for Black-footed Ferrets, Appendix, p. 59, 60, 65, in  Roelle, J.E., Miller, B.J., Godbey, J.L., and Biggins, D.E., eds., 2006, Recovery of the black-footed ferret—progress and continuing challenges: U.S. Geological Survey Scientific Investigations Report 2005–5293; https://pubs.usgs.gov/sir/2005/5293/report.pdf.
​A captive breeding program began in 1985 due to canine distemper and Sylvatic plague outbreaks in the prairie dog and ferret populations in the Meeteetse area. The last eighteen surviving ferrets were captured for the recovery project. Ferrets were first reintroduced to the wild in the Shirley Basin (Location 1). Today there are thirty release sites in western North America from Canada to Mexico. All the ferrets alive today are direct descendants of the eighteen trapped ferrets near Meeteetse. In 2016, ferrets returned to the Meeteetse area (Location 28 on map below). 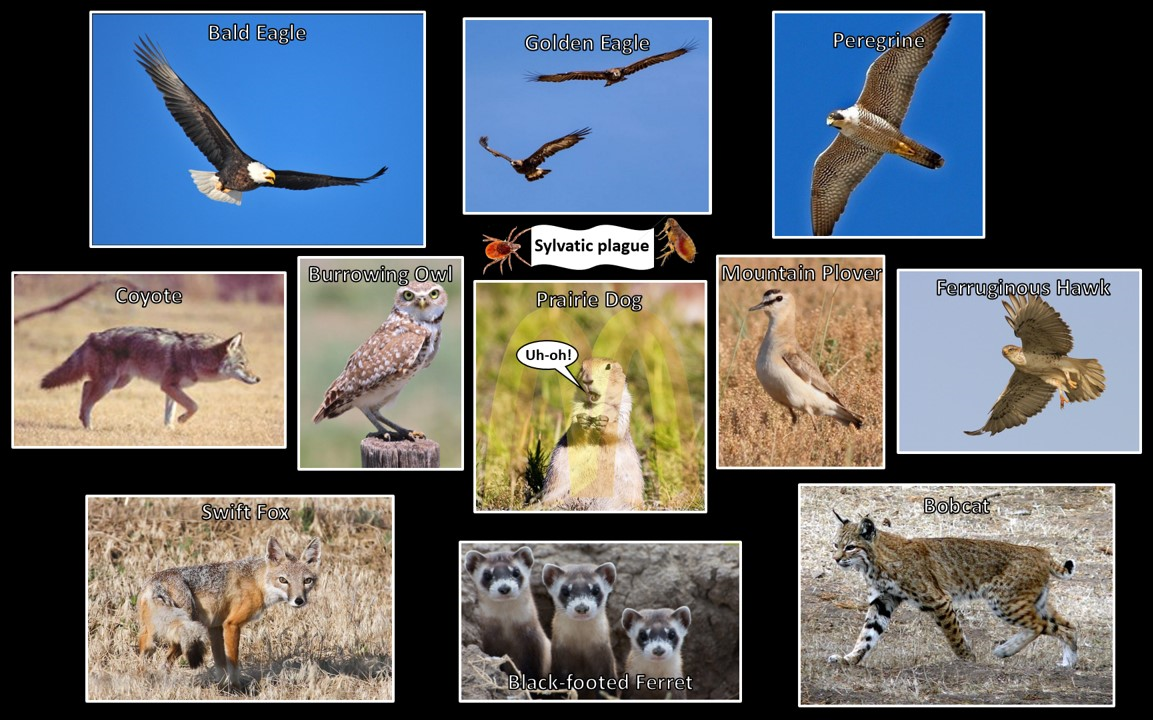 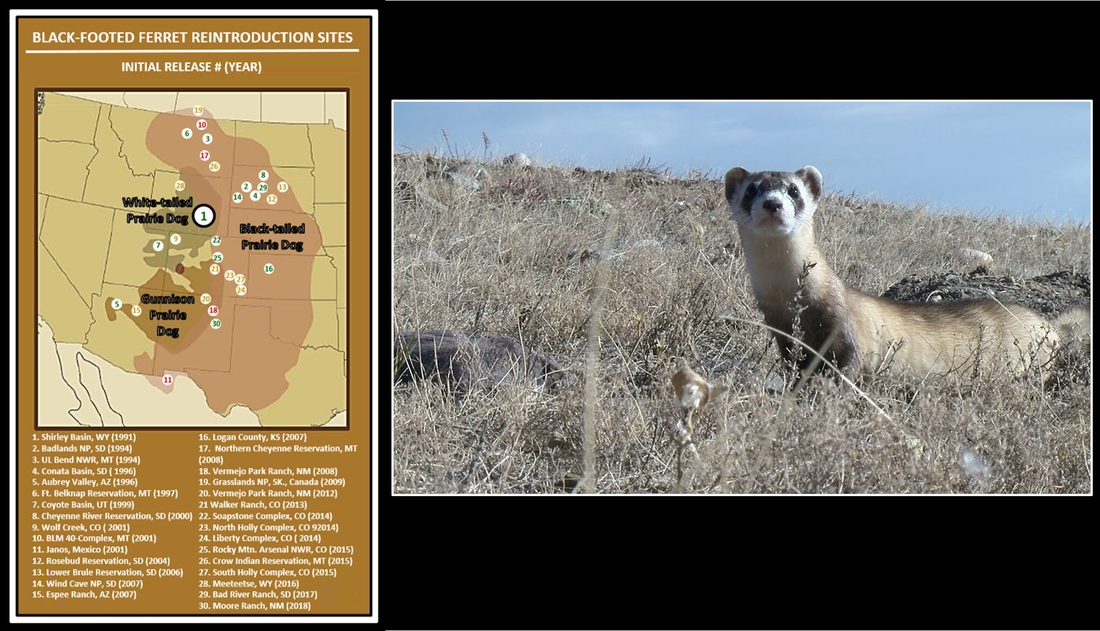 ​Eighteen miles south of abandoned Shirley Basin townsite is PacifiCorp’s Dunlap Wind Farm. The project site is eight miles north of Medicine Bow, at the southeast foot of the Freezeout Mountains. The wind farm lies within the Wyoming wind corridor that extends from Rawlins to Wheatland (See https://www.geowyo.com/big-hollow.html). The Project was operational in September 2001 with 74, 1.5-megawatt turbines generating 111 megawatts of electricity. 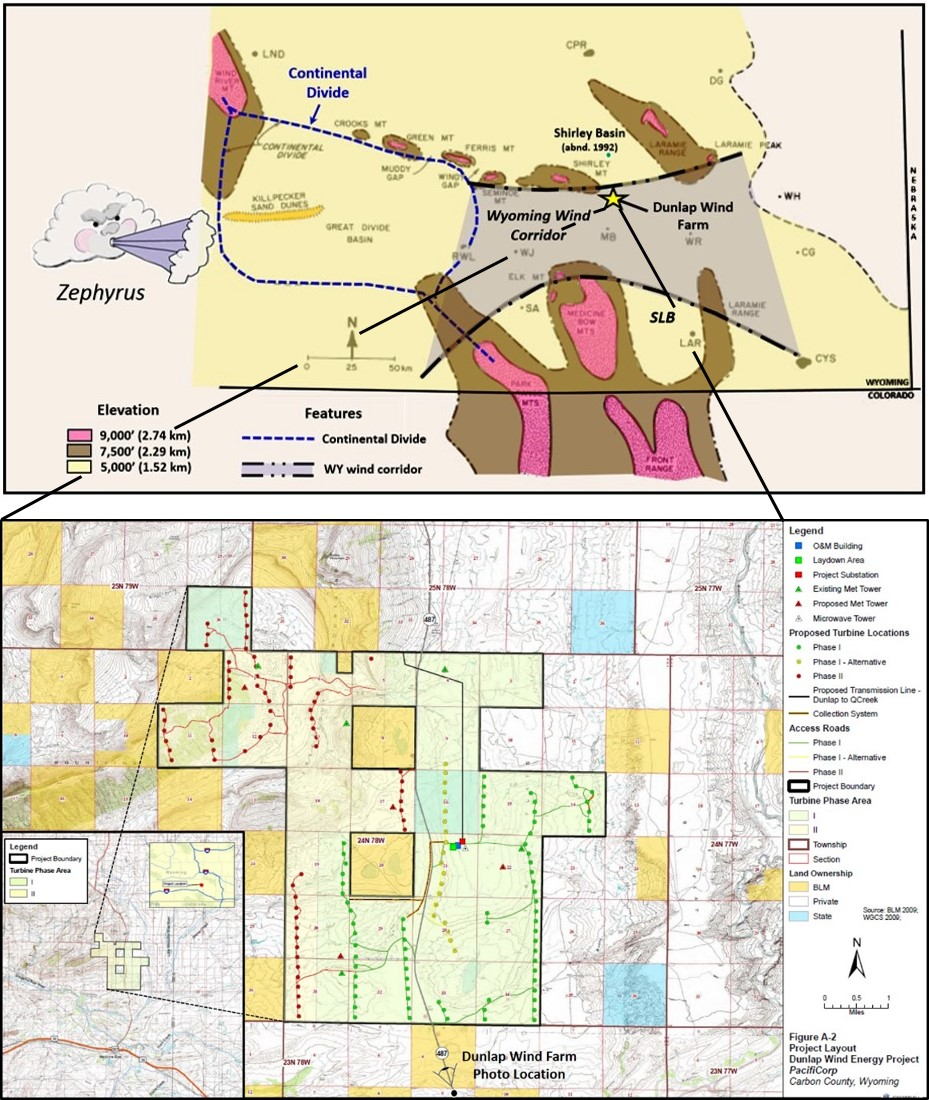