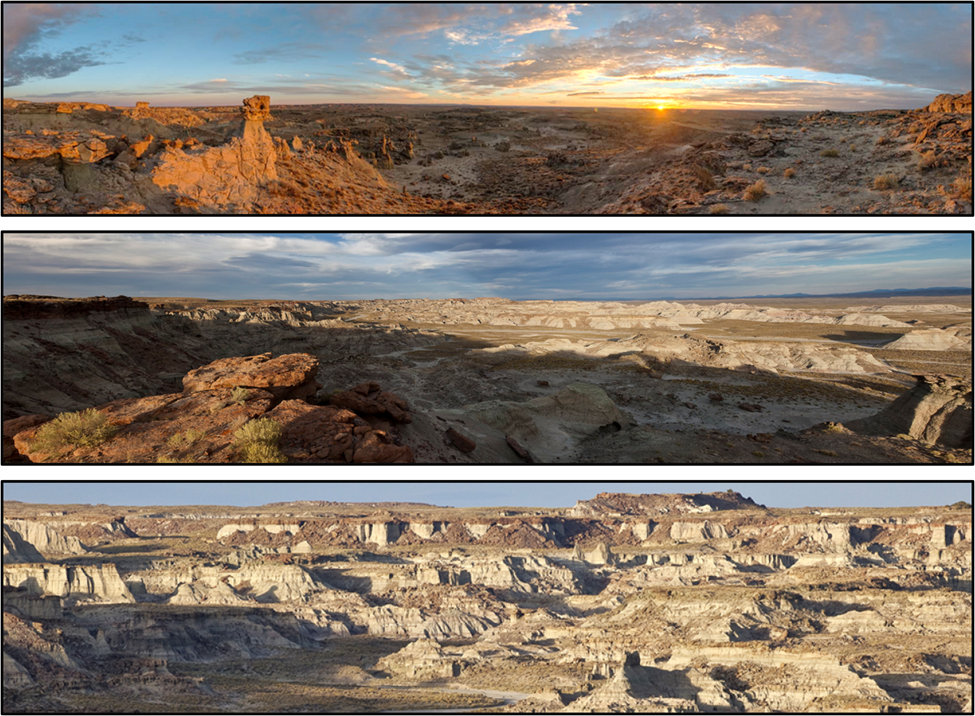 Isolated in the western Washakie Basin lies Adobe Town. The residents of the town’s earthen structure walls, towers, ridges, and canyons are not people. Wild horses, pronghorn, coyotes, elk, raptors, and assorted burrowing critters comprise the population in this breathtaking badlands wilderness.
The Washakie Basin is located in the southeastern corner of the Greater Green River Basin. It is a square-shaped, rimmed basin about 50 miles across. The DeLaney (north) and Kinney (west) Rims rise about 1,000 feet above the basin floor. The basin is the southern part of the Red Desert, Wyoming. The high elevation (6,600 to 7,800 feet) badlands of Adobe Town are the central feature of the area. 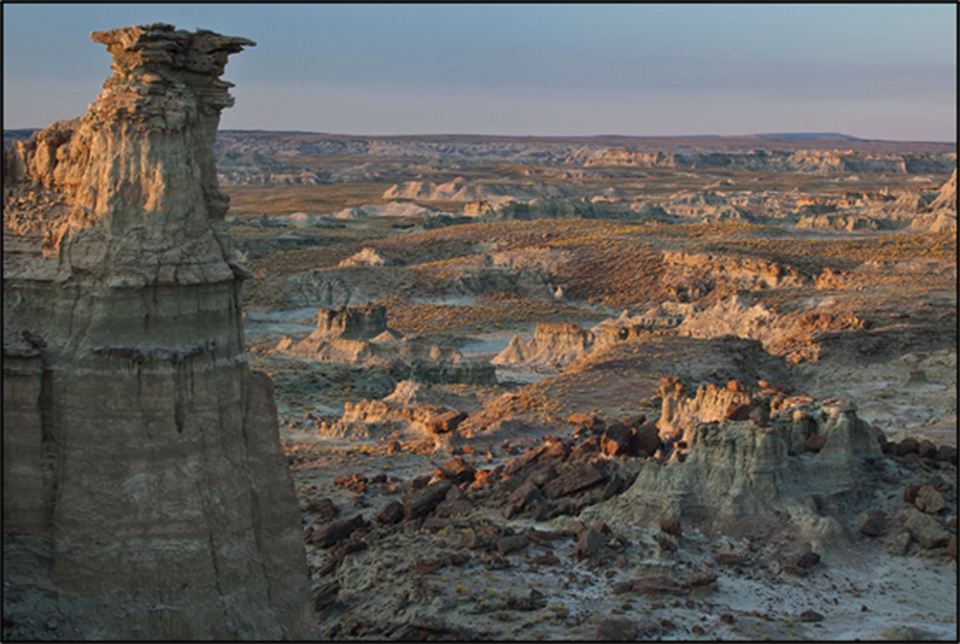 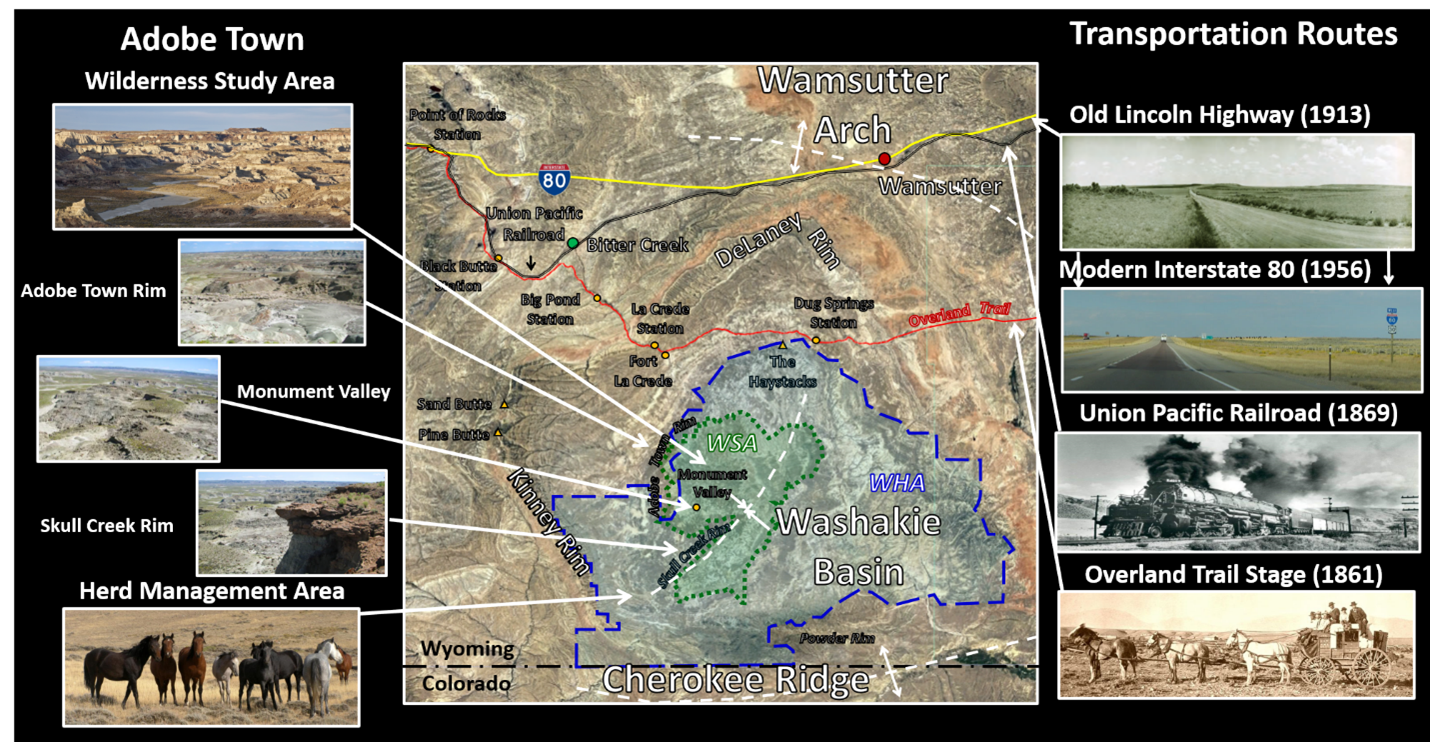 In 1869, the 40th Parallel Survey (1867-7-1872) led by Clarence King (Chief of Geologists) and General A.A. Humphrey (Chief of Engineers) traveled through the central badlands region and provide the first report of the Adobe Town landscape:
This escarpment is the most remarkable example of the so-called bad-land erosion within the limits of the Fortieth Parallel Exploration. The Bridger beds here rise about 300 feet above the level, dry valley to the south, and present a series of abrupt, nearly vertical faces, worn into innumerable architectural forms, outliers often standing detached from the main wall in bold blocks, which have been wrought into a variety of singular forms by eolian erosion. Plate XV. gives a very fair general view of a portion of the Bad Lands, showing some of the curious buttressed shapes. A few ravines cut their way through the plateau from considerable distances back in the basin. Along the walls of these ravines the same picturesque architectural forms occur, so that a view of the whole front of the escarpment, with its salient and reentrant angles, reminds one of the ruins of a fortified city. Enormous masses project from the main wall, the stratification-lines of creamy, gray, and green sands and marls are traced across their nearly vertical fronts like courses of immense masonry, and every face is scored by innumerable narrow, sharp cuts, which are worn into the soft material from top to bottom of the cliff, offering narrow galleries which give access for a considerable distance into this labyrinth of natural fortress.
​ 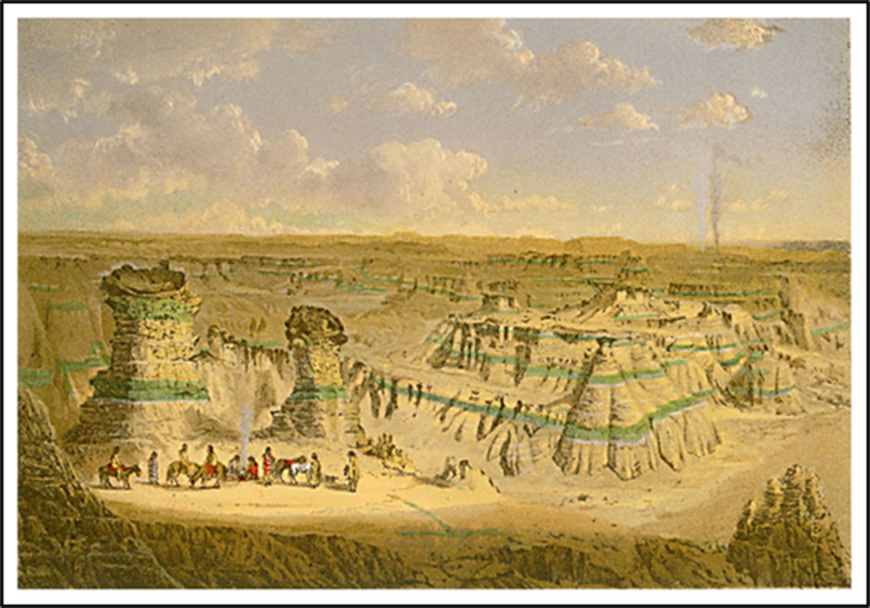 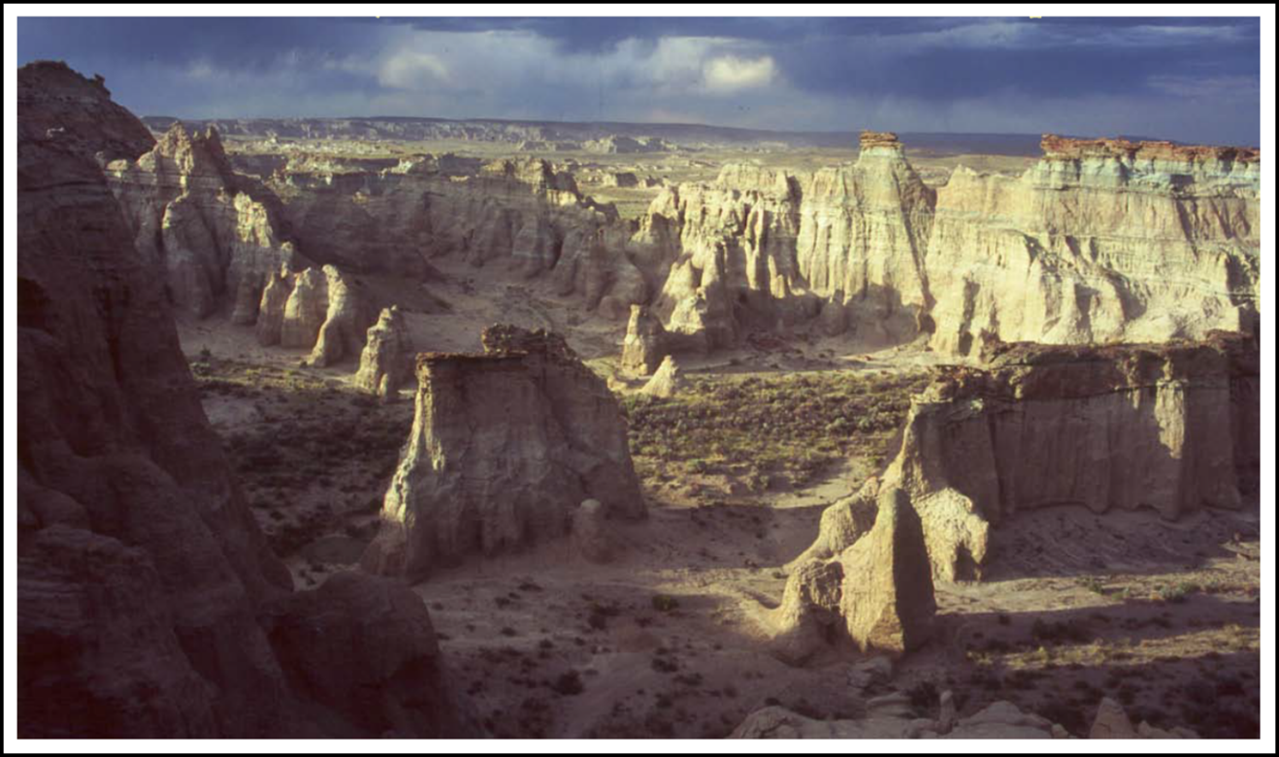 Adobe Town Rim.
Image: Molvar, E., 2015; http://pdf.wildearthguardians.org/site/DocServer/AdobeTown.pdf.
The landscape’s erosional features resemble a village or fortress of adobe buildings. The name was first used by vertebrate paleontologist Walter Granger in 1909:
The bad lands at this part of the rim are known, because of their peculiar form of weathering, as "Adobe Town." (Granger, W., 1909, American Museum of Natural History Bulletin, Vol. 26, Article III, p. 17; Faunal horizons of the Washakie Formation of southern Wyoming. Bulletin of the AMNH; v. 26, article 3).

The Overland Stage-Emigrant Trail and the north and south branches of the Cherokee Trail divert around the central badlands of Adobe Town. The Union Pacific’s transcontinental railroad closely followed the Northern Cherokee Trail between the Great Divide and Washakie basins. The town of Wamsutter (1868) was originally named Washakie, but due to confusion in delivery of mail and freight with Fort Washakie, Fremont County the name was changed in 1885. Wamsutter is the only town that lies within the Red Desert and is called “The Gateway to the Red Desert.” The name Washakie was also used for a stage stop on the Overland Trail, located about 20 miles southeast of Wamsutter. 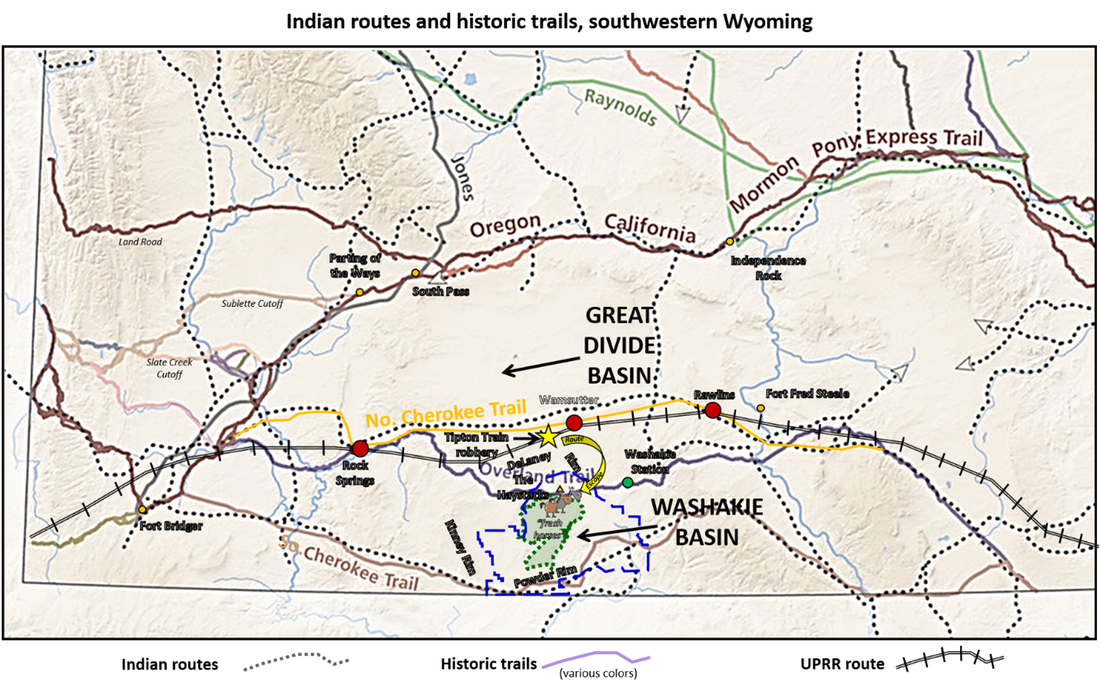 Map of Indian and emigrant routes, southern Wyoming with approximate route of the Transcontinental Railroad shown (black tracks). Notice the routes avoid the badlands area. Adobe Town Wilderness Study Area in green and Herd Management Area in blue.
Image: After https://www.wyohistory.org/sites/default/files/geography1New_0.jpg.
On the evening of August 29, 1900, Butch Cassidy and the Wild Bunch robbed a west-bound Union Pacific train two and a half miles west of Tipton Station. The gang employed the same technique it had used in the Wilcox robbery committed the year before. They made their escape eastward around the Haystacks where they had hidden fresh horses. 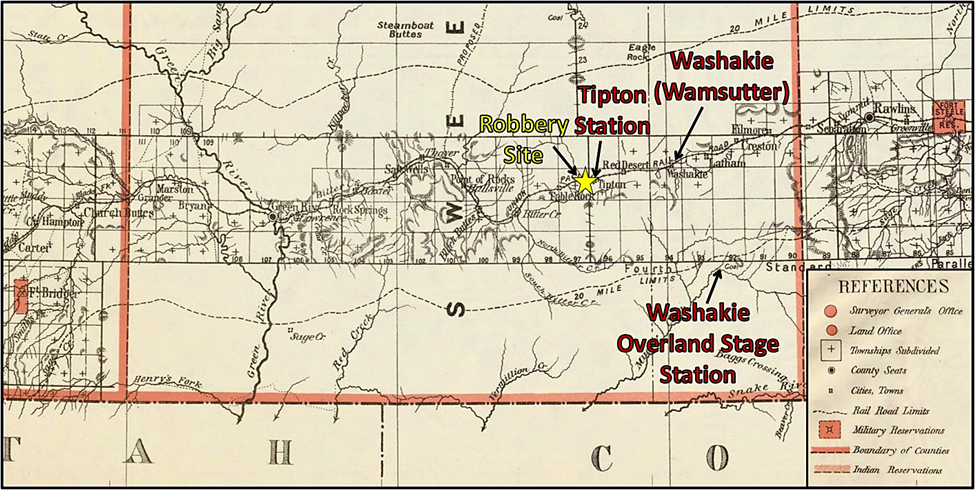 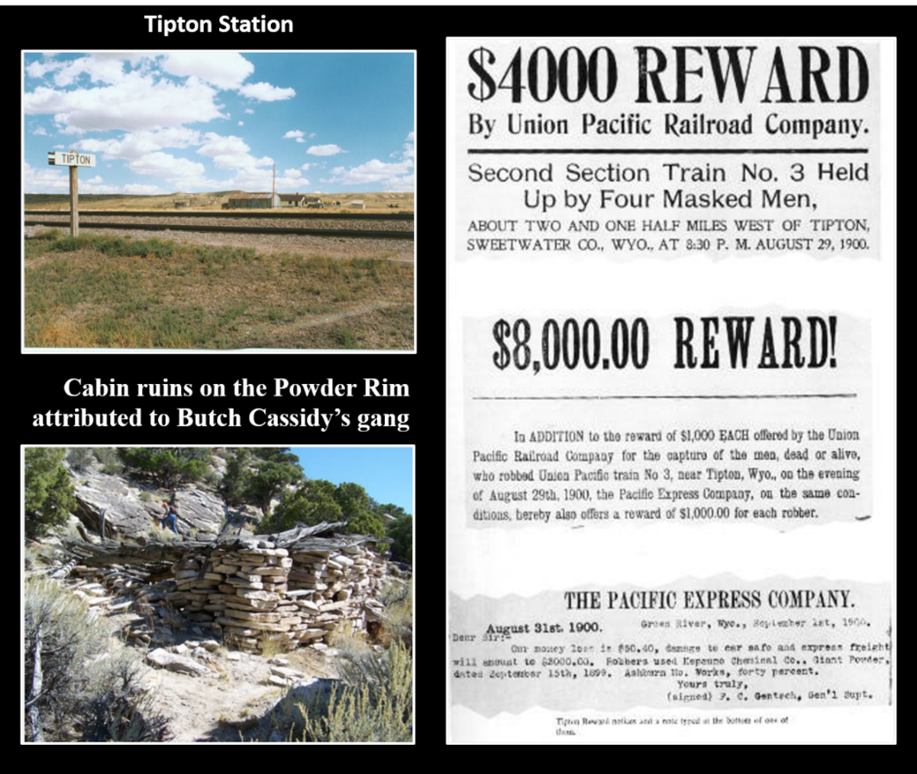 The onset of the latest Cretaceous Laramide tectonism created the Washakie Basin and surrounding arches shown on the tectonic and geologic maps. Throughout the early Tertiary, the basin oscillated between a marshy, flood plain to large lake depositional environments. The river-lake stratigraphy of Eocene Wasatch Formation (55.8-46.2 million years ago) and the Green River Formation (53.5-48.5 million years ago) records their complex interfingering. Ash from the Absaroka and Challis volcanic fields rained down on both formations settling in the Green River Lake bottom and reworked by the Wasatch streams. Alteration of the tuff beds produced the zeolite deposits found along Kinney Rim. 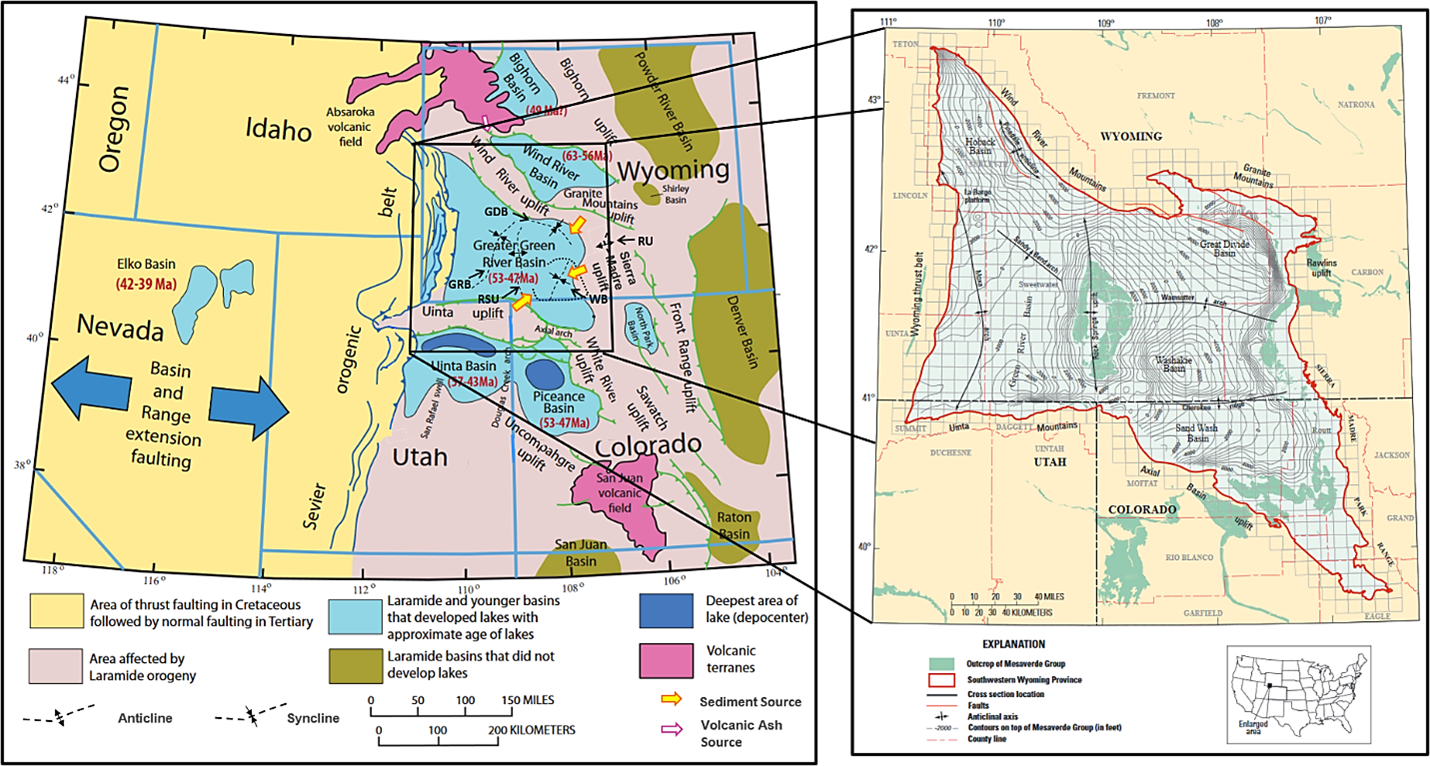 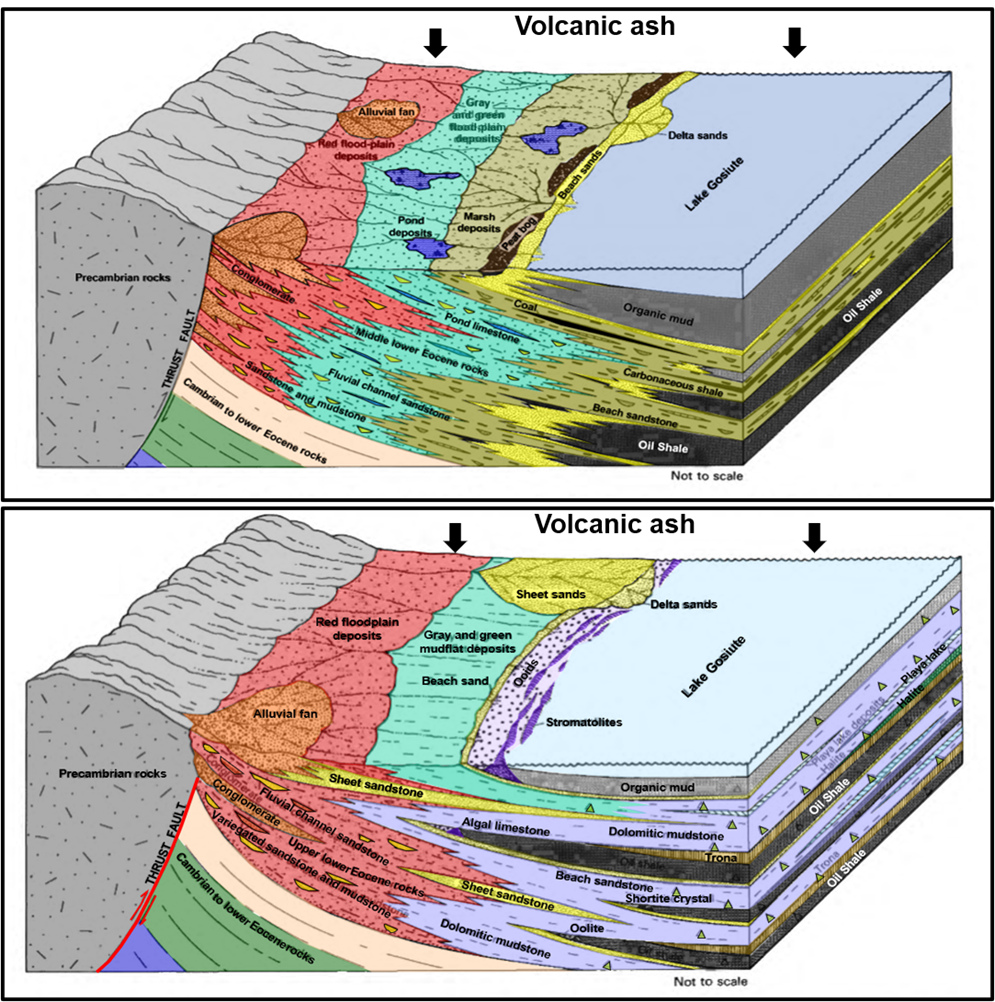 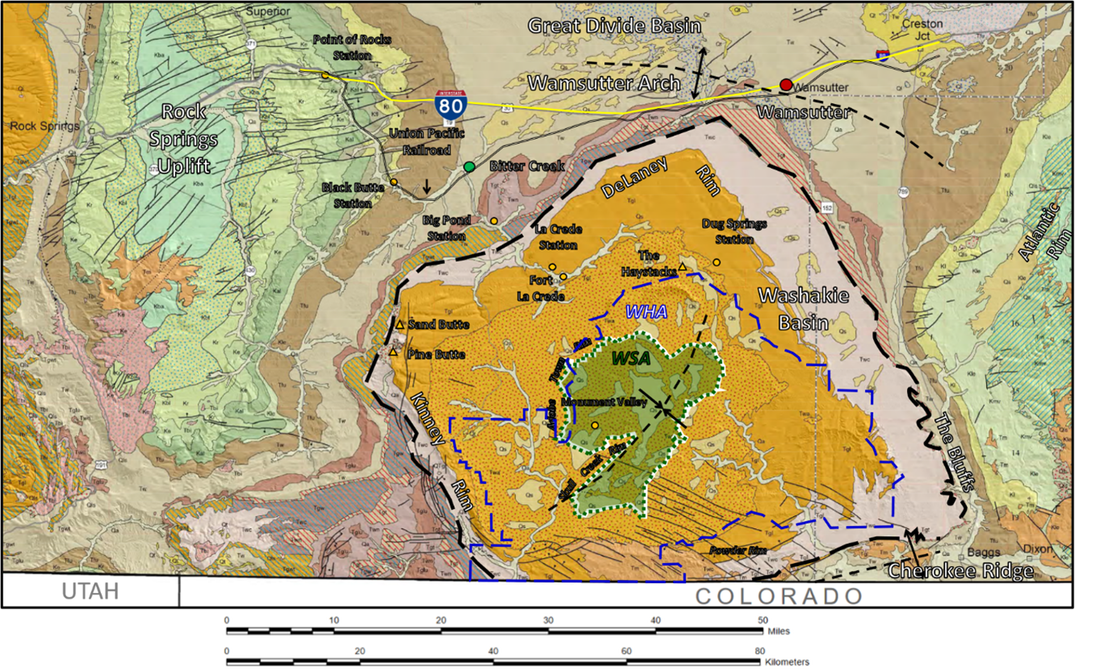 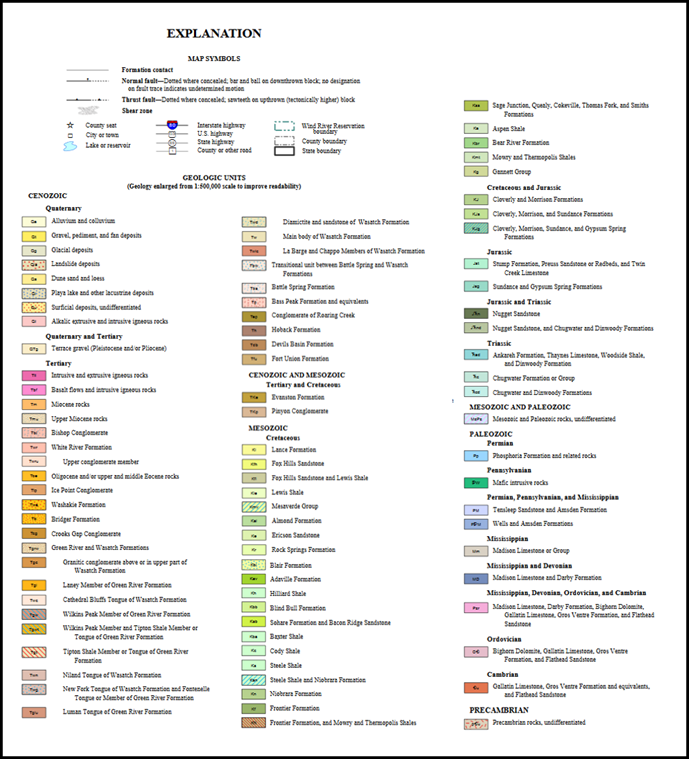 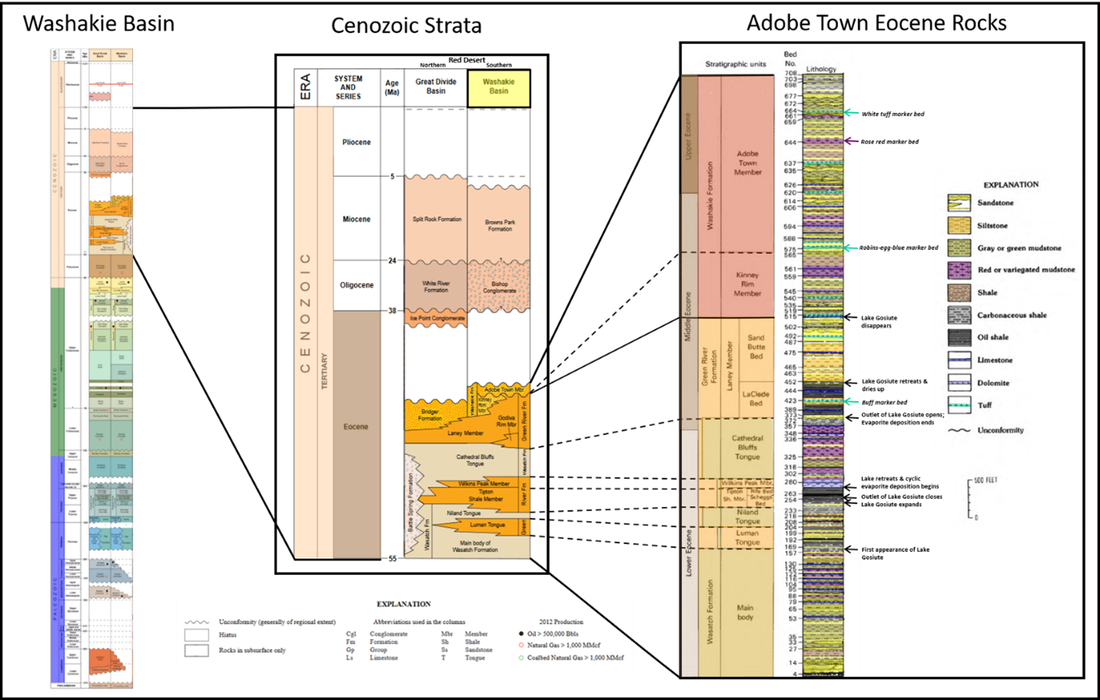 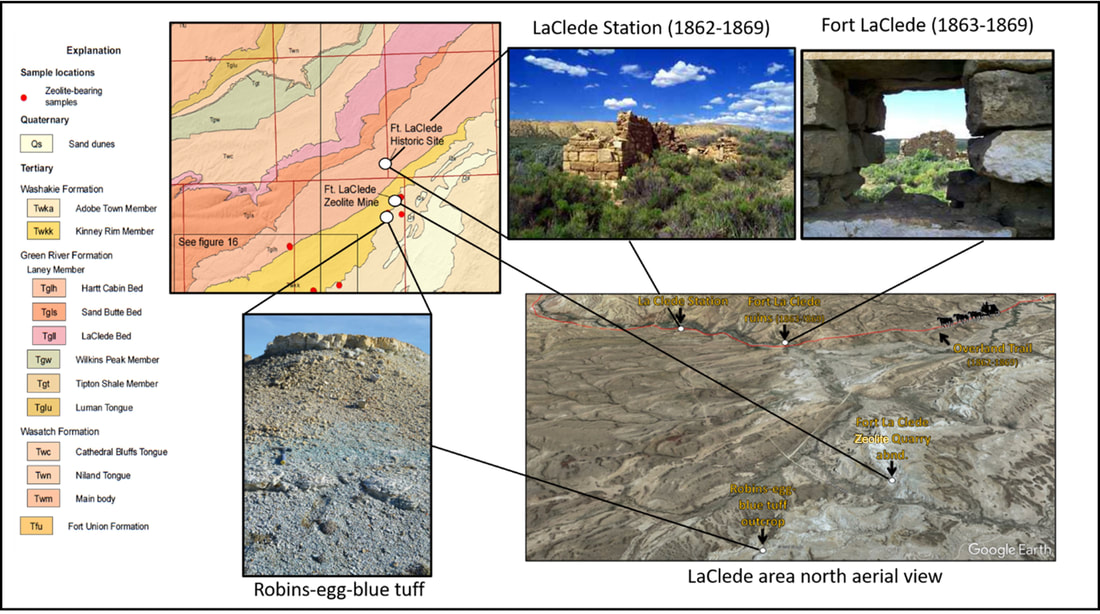 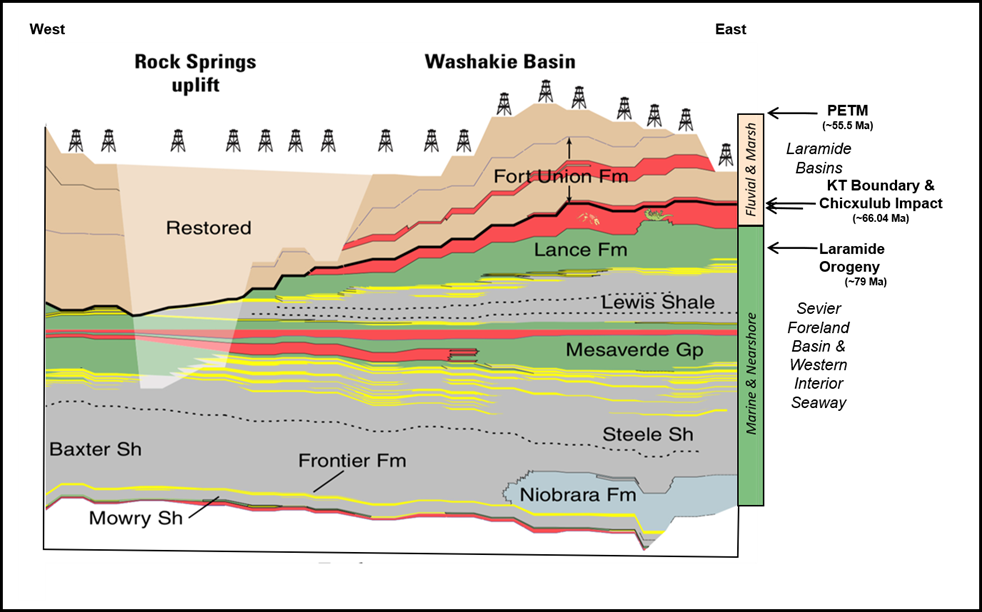 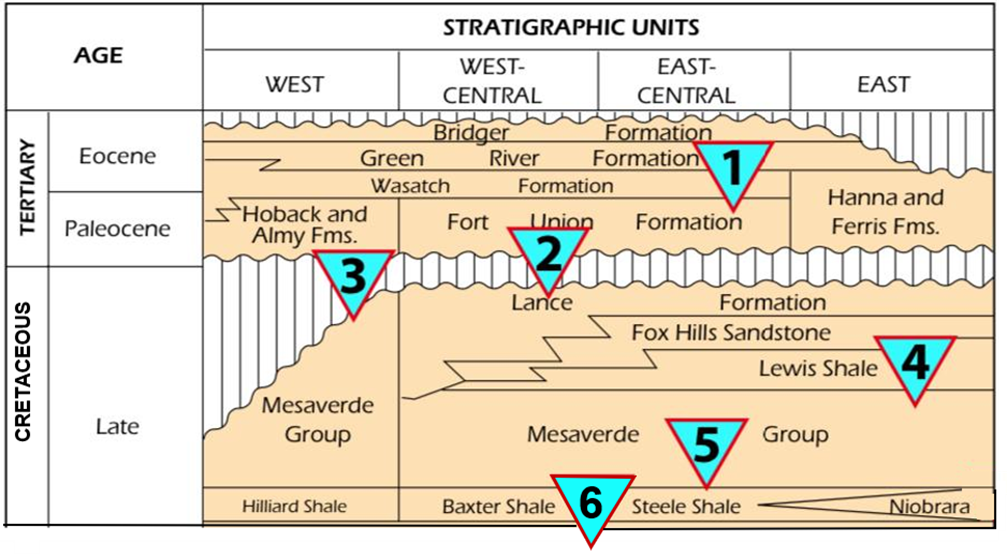 If you go, the BLM recommends a high clearence vehicle with 4-wheel drive and a spare tire. Also have a full tank of gas, carry a map, lots of water and survival supplies. Tell someone where you are going.