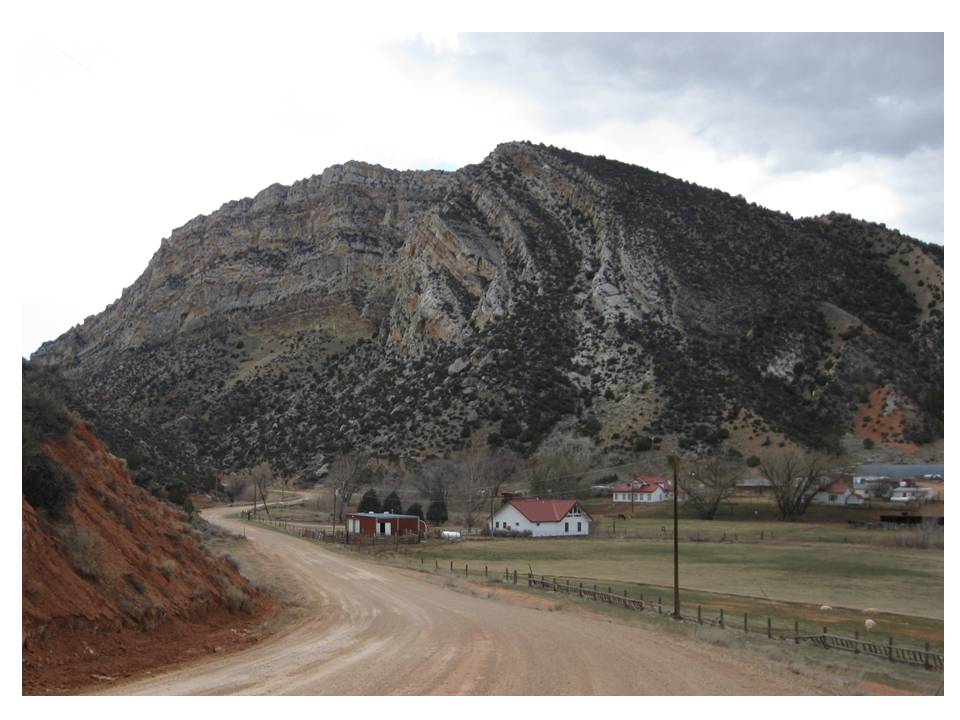 Backroad drive through scenic southeast corner of Bighorn Basin and across the gentle Owl Creek Mountains.  Several large geologic folds called anticlines are exposed and cut through by streams.  Miles of red Triassic Chugwater outcrops contrast with the green pastures on big cattle ranches in the Upper Nowood River Valley.  This is a secluded area where time seems to have stopped 100 years ago.

The Nowood River rises on the north flank of the eastern Owl Creek Mountains and flows north into the Bighorn Basin. Several streams flowing off the southwest flank of the Bighorn Mountains add their waters to the river after carving impressive canyons through the sedimentary rock layers. The Nowood joins the Bighorn River about halfway between Basin and Worland. 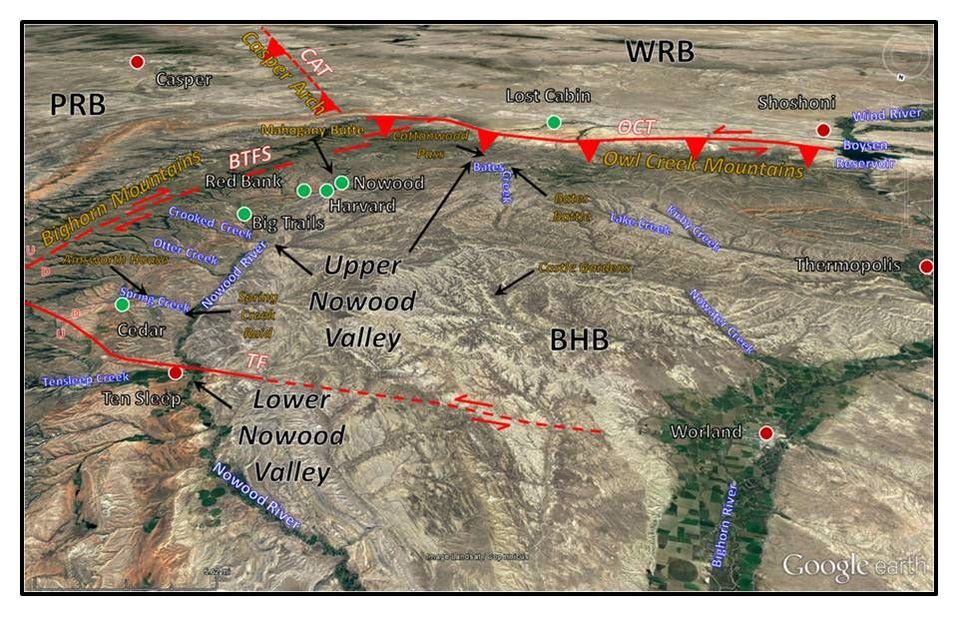 "I kept on moving down the Big Horn and trapping as I went until I reached the junction of the Nowood...then I worked my way up the Nowood Valley...this valley pleased me more than any other place I had ever been. It was a game paradise. Buffalo roamed over the valley by the hundreds".

He decided to settle down at the confluence of the Nowood River and Crooked Creek. He and his new wife lived in a tent while he built one of the first permanent residences in this part of the basin. The Ainsworth House was placed on the National Register of Historic Places in 1986. 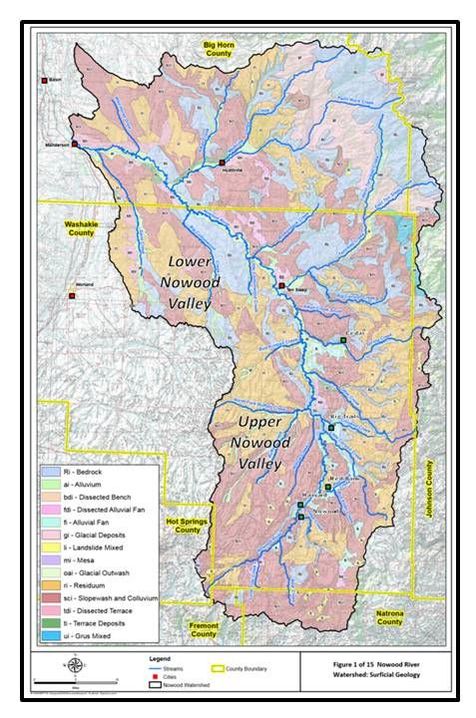 Left: East view from WY 434 toward the Ainsworth House. Right: The Ainsworth House.
Images: Left: Google Earth Street View; Right: https://npgallery.nps.gov/NRHP/GetAsset/0e379698-c876-4aa9-99fc-a677d9175e7e?branding=NRHP
Frank promoted the town of Red Bank and the Upper Nowood area to other prospective settlers. The Post Office was established in 1898. To avoid confusion with another town of the same name five and a half miles to the southeast, the name was changed to Big Trails. The new name came from the intersection of several Indian trails at this location.
​

An apocryphal story told by William Cody’s sister on when he heard of the Bighorn Basin from an Arapaho warrior speaks truth to Native American sentiment for the basin.  The warrior relayed the beauty and natural abundance of the area to the Scout in 1875 and called the place “Eithity Tugala.” This loosely translates to heaven on earth.


This area is also the intersection of three major geologic structural trends: the Bighorn Mountains, the Owl Creek Mountains, and the Casper Arch. All three are basin-bounding structures that were elevated during the Laramide mountain building event that occurred about 70 million years ago. The Bighorn and Owl Creek mountains mark the southeast margin of the Bighorn Basin separating the Bighorn, Powder River and Wind River Basins. The Casper Arch separates the southern Powder River Basin from the eastern Wind River Basin. This triple junction is in the same area as accretion zones between sub-provinces of the ancient Wyoming Craton. The basement fabric established during this Precambrian tectonism greatly influenced the location and orientation of the structural arches developed during the Laramide mountain building event. Flat-plate subduction along the western margin of North America generated the compressive stress field that resulted in the crustal shortening within preexisting weakness zones of the Wyoming Craton and elevated the Rocky Mountains. The three Laramide arches that converge at the southeastern corner of the Bighorn Basin are aligned with these Precambrian boundary zones. The recently discovered suture along the eastern margin of the Bighorn Mountains is about 180 miles west of the previously recognized boundary of the Wyoming Craton. 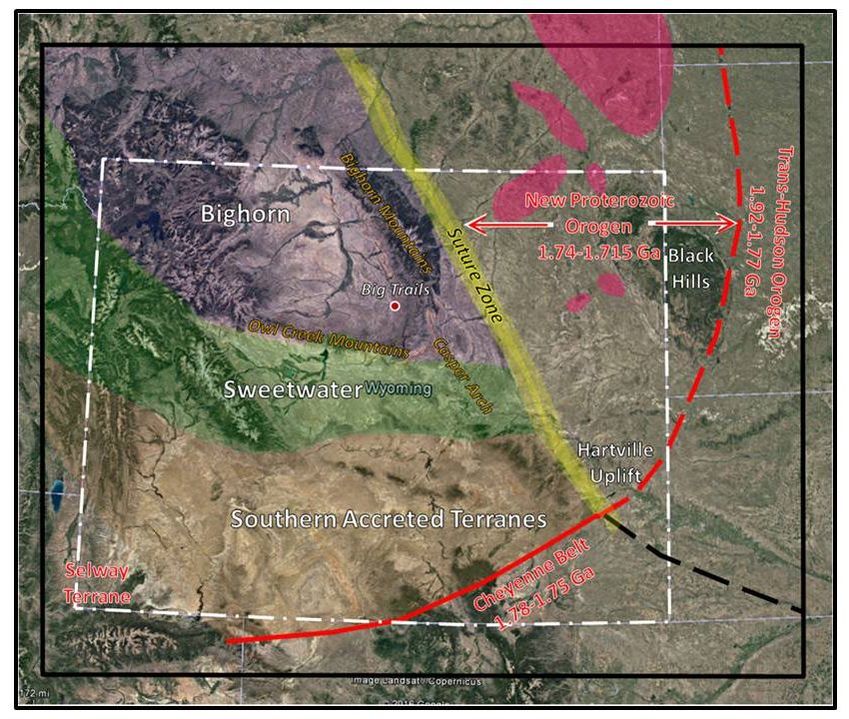 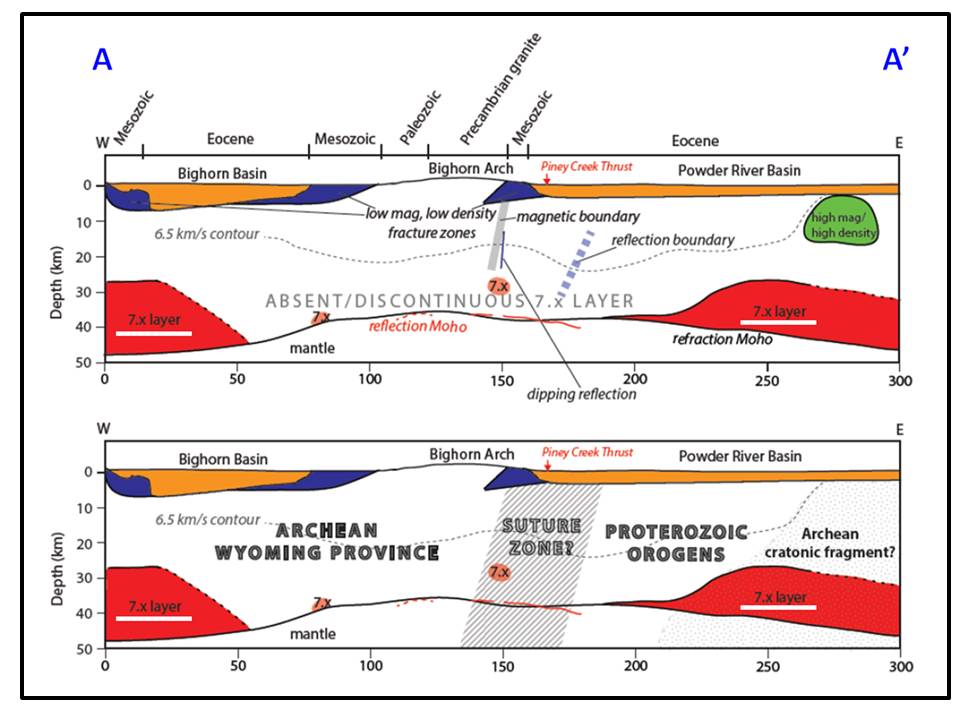 Geophysical model of seismic line A-A’. The red 7.x layer (white underline) is the high velocity, high density lower crustal layer that underlies the Bighorn and much of the Sweetwater Terranes. The model indicates that the absence or thinning of this layer may correspond to Precambrian weakness zones where deformation is localized.
Image: After Worthington, L.L., Miller, K.C., Erslev, E.A., Anderson, M.L., Chamberlain, K.R., Sheehan, A.F., Yeck, W.L., Harder, S.H., Siddoway, C.S., 2016, Crustal Structure of the Bighorn Mountains Region: Precambrian Influence on Laramide Shortening and Uplift in North-Central Wyoming: to be published in Tectonics, Fig. 22B. https://www.researchgate.net/publication/288700199_Crustal_structure_of_the_Bighorn_Mountains_region_Precambrian_influence_on_Laramide_shortening_and_uplift_in_north-central_Wyoming
The Big Trails Fault System extends about 53 miles from the Tensleep Fault in the north, to the Owl Creek Thrust at the south terminus along the southwest flank of the Bighorn Mountains. The fault has a maximum of 4,500 feet down-to-the-west vertical displacement.  Horizontal motion is 2-3 miles of right-lateral slip. 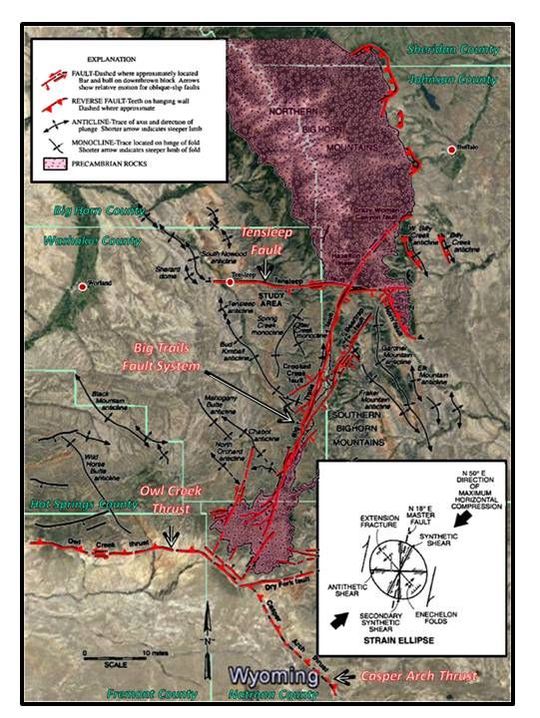 WY 434 pavement ends just south of Big Trails. The unpaved Nowood Road travels within a valley walled by outcrops of the Triassic Chugwater Formation. The contrast of the red rock with the green cultivated pastures and stream valleys is stunning. The Chugwater consists of shale and siltstone in the lower and middle intervals, and becomes more sandy in the upper intervals. Total Chugwater thickness is about 1,000 feet.  Depositional environment for the Chugwater is believed to be shallow marine.  Individual beds in the Lower and Middle Chugwater can be followed across the basin with little change in thickness and character. The Upper Chugwater has more variability.  Almost no trace of life is present in these Chugwater beds - a result of the global extinction event at the Permian-Triassic boundary that wiped out up to 96 percent of all marine species. 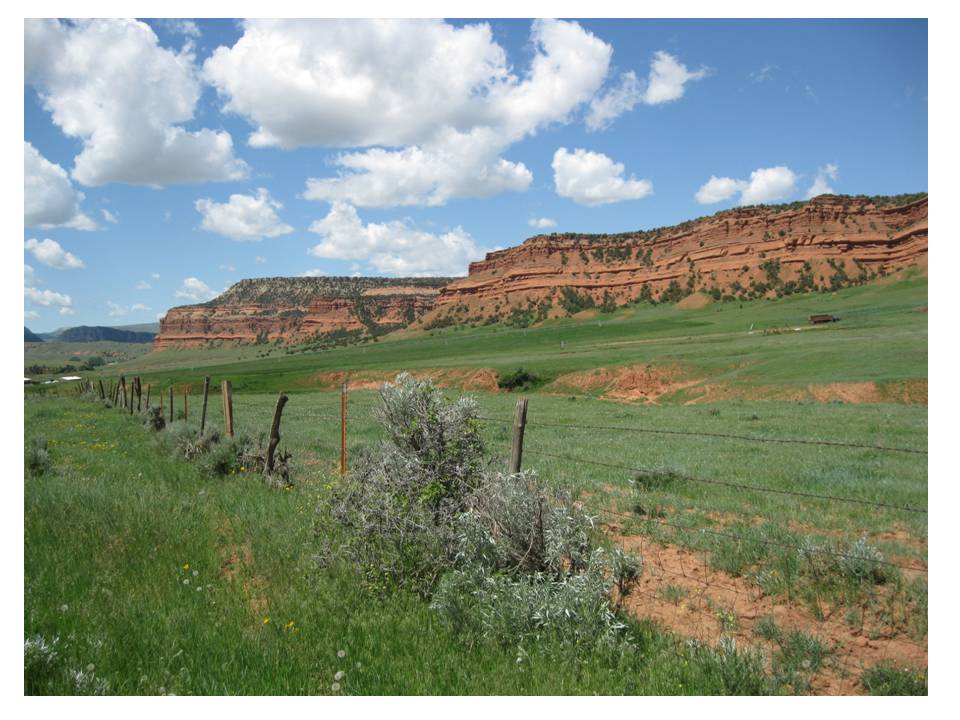 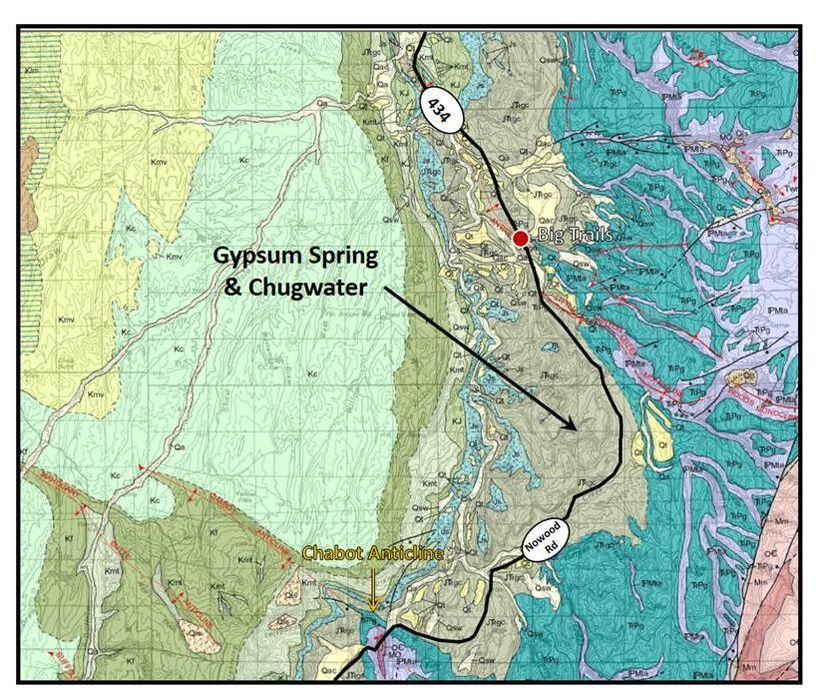 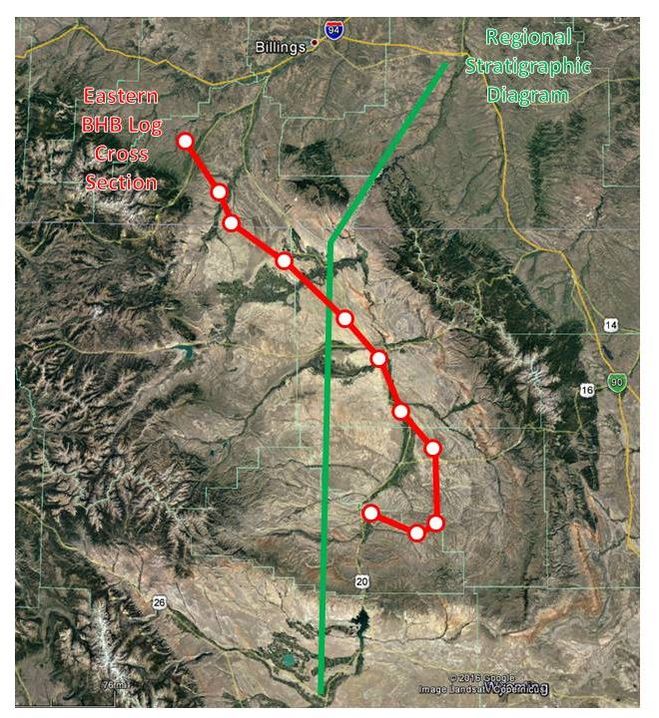 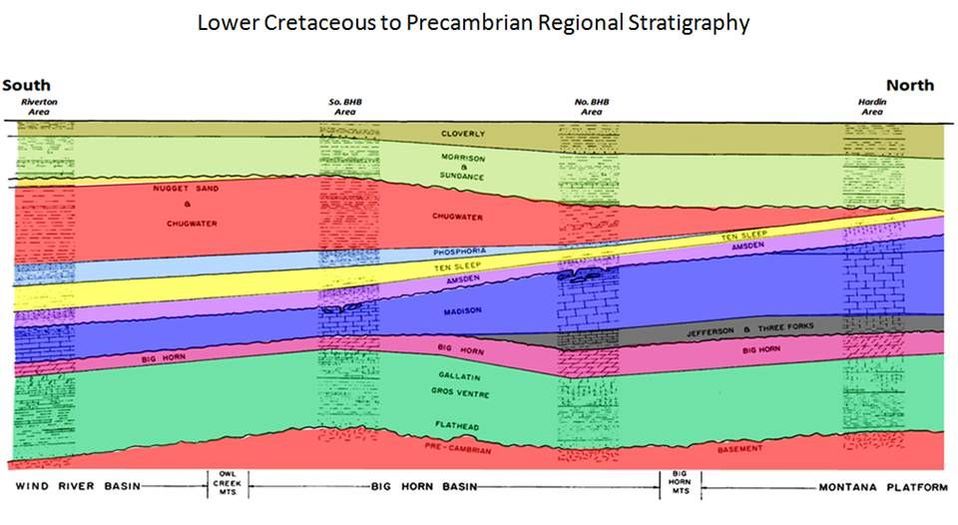 Diagram showing Chugwater (red) thinning significantly as you move north from the Wind River Basin to the Big Horn Basin to Montana.  An erosional event after deposition of the Chugwater truncates the formation from the top.
After Fanshawe, J.R., 1971, Structural Evolution of Bighorn Basin: WGA Symposium on Wyoming Tectonics and Their Economic Significance; 23rd Annual Field Conference Guidebook, Exhibit 2 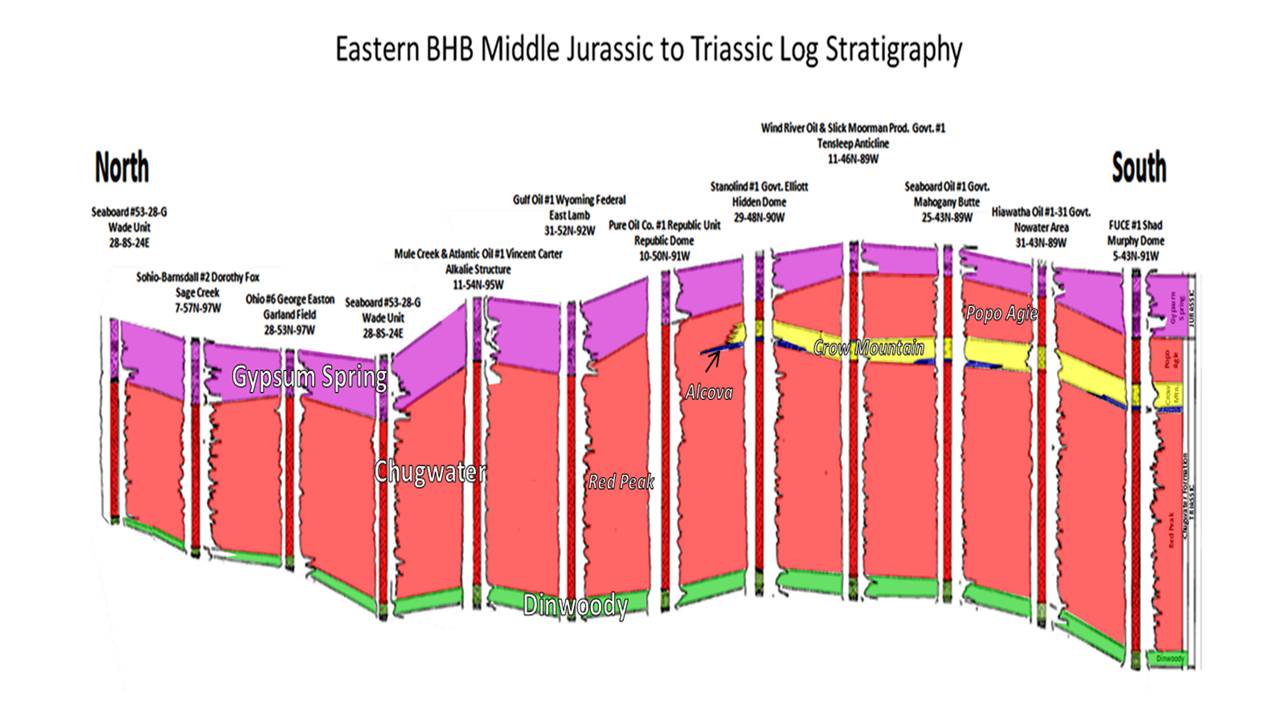 Well log cross section north to south across Bighorn Basin showing thickening of Chugwater (red) to the south due to less erosion/truncation of the upper Chugwater rocks.  Ancient erosion surface is at base of Gypsum Spring (purple). The four members of the Chugwater shown above are: 1) Red Peak shales and siltstones in the Lower and Middle Chugwater, 2} Alcova very thin regionally extensive limestone shown in blue, 3) Crow Mountain sandstone shown in yellow in the Upper Chugwater, and 4) Popo Agie shales, siltstones and sandstones in the Upper Chugwater.
After  Mills, N.K., American Stratigraphic Co. for Wyoming Geological Association Nomenclature Committee, 1956, Subsurface Correlation in the Bighorn Basin, Wyoming: WGA Wyoming Stratigraphy: Subsurface Stratigraphy of the Pre-Niobrara Formations in Wyoming
About 12.5 miles south of Big Trails (4,855 feet ASL) the route passes through Chabot Anticline. Where the Nowood River has cut through the axis of the fold exposing Paleozoic rocks. The structural relief is over 1,450 feet. This is an example of erosion by a superposed stream. 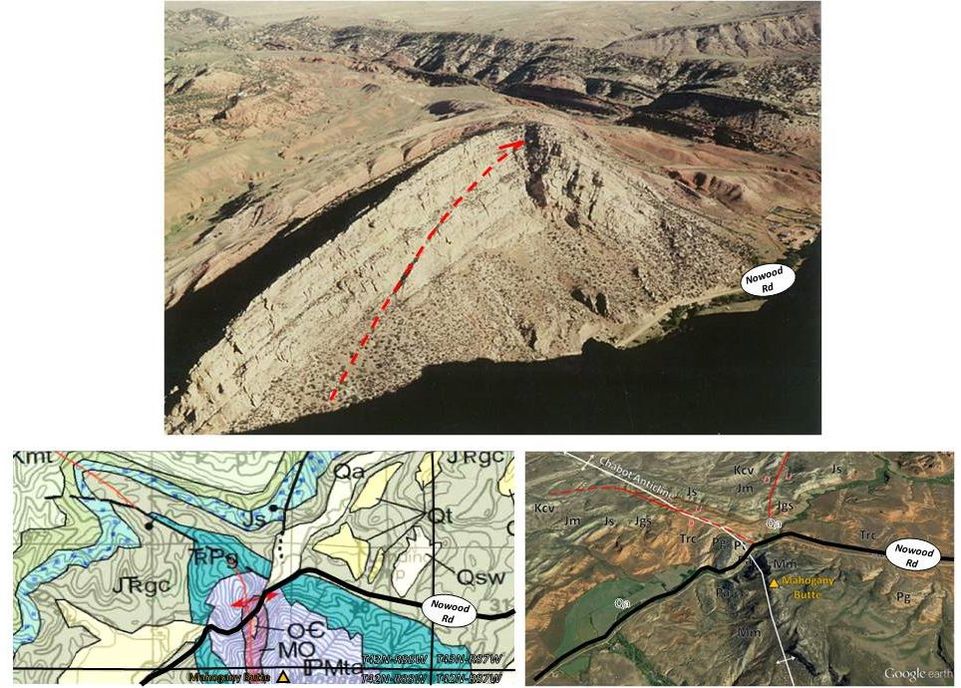 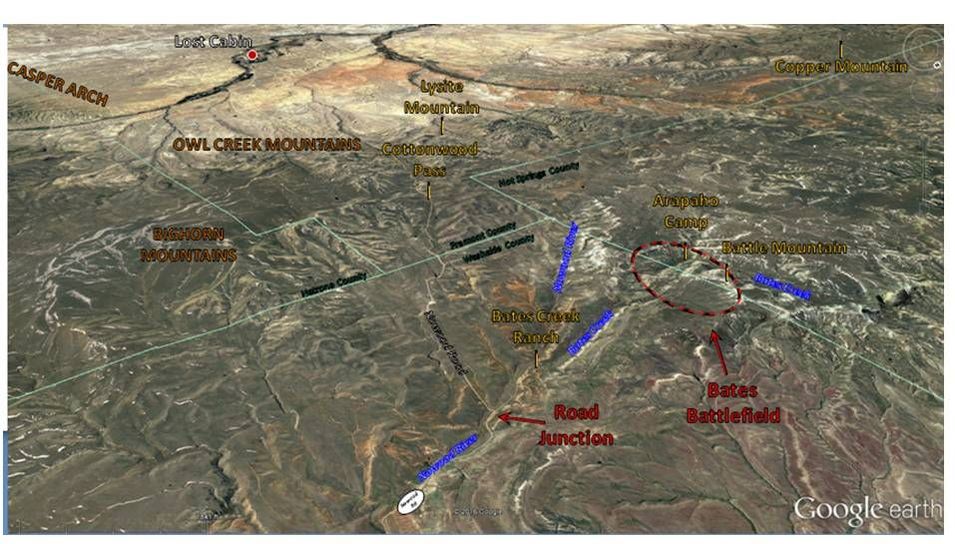 South aerial view of Nowood Road junction with Bates Creek Ranch Road.
Image: Google Earth
​From this point the road descends 9.5 miles from the Owl Creek Mountains along Cottonwood Creek to Badwater Creek. Follow Badwater Creek for 5 miles to Lost Cabin (5,430 feet ASL). WY 434 follows a Native American tail between Lost Cabin and Big Trails. It is also the route the stage line carried the mail before railroad service. Today the route remains as it always was – a journey through a corner of the Bighorn Basin that is a bit of “heaven on earth.” 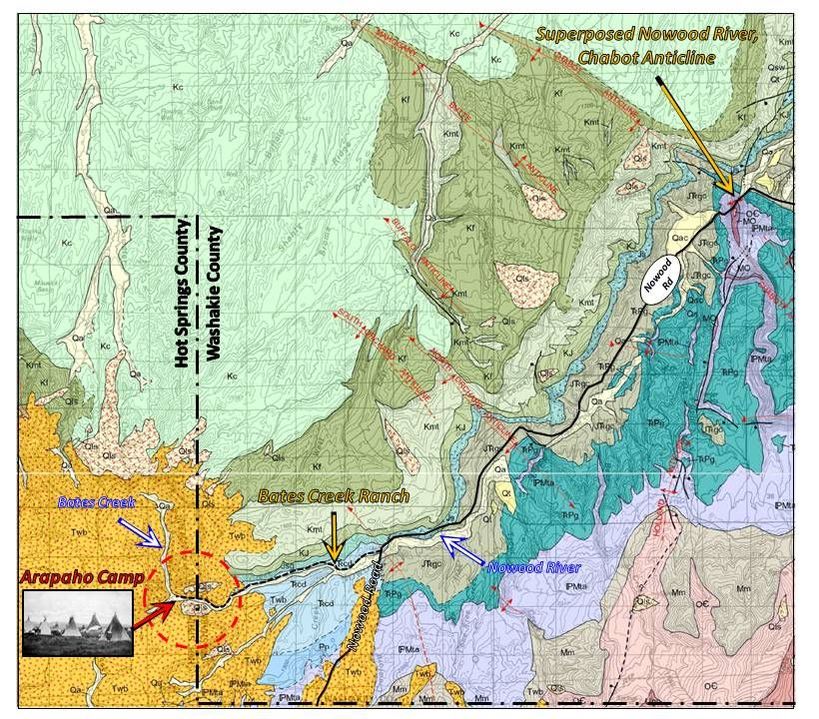 What You Will See On Nowood River Road

This is a beautiful, peaceful drive - especially from Ten Sleep along the Nowood River to the top of the Owl Creek Mountains.  The road down from the Owl Creeks to Moneta in the Wind River Basin is rather barren and crosses Madden Field, one of the largest gas fields in the state. We don't have any hikes or geology stops to suggest at this time.  This trip is all about exploring a secluded place with your vehicle. The best time to take this route is spring when there is an attractive contrast between the red outcrops and the green grass. It is 77 miles one way and takes about two hours. From Ten Sleep, the first 21 miles on WY 434 are paved, the next 43 miles along the Upper Nowood Road and over the Owl Creeks to Lost Cabin is gravel, and the last 13 miles to Moneta are paved. The road is fine for a 2WD passenger car. However, there is no road maintenance from October through April over the Owl Creeks.  There is minimal traffic, no services, poor cell coverage and occasional cattle on the road. We do not recommend this road if it is wet or snowy.  If you don’t have the time to drive the entire road, we suggest you drive the first 35 miles south from Ten Sleep.  If you are traveling between Ten Sleep and Casper, you should consider taking this backroad at least once because it will only add about 30 minutes to your trip. Enjoy! 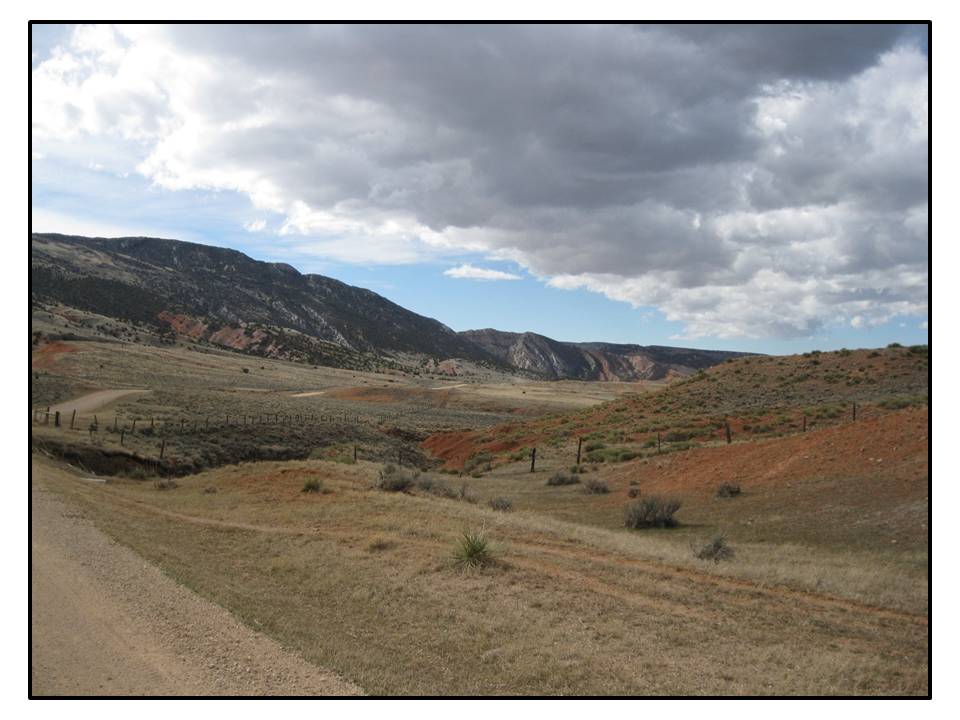 The Bates Battle (aka the Nowood Battle, the Battle of Snake Mountain and Battle of Young's Point) was a minor skirmish between the US Calvary, with Shoshone warriors, against an encampment of Arapaho Indians.  The previous summer a band of Lakota Sioux were raiding in the Sweetwater Mining District of the Wind River Basin. While their objective was mainly cattle and horses, some people were killed in the attacks. The next spring the Army pursued the raiders who had returned home with the arrival of winter. An Arapaho encampment (not the Lakota raiders from the summer before) was discovered by Shoshone army scouts in a valley along Bates Creek at the base of Battle Mountain. 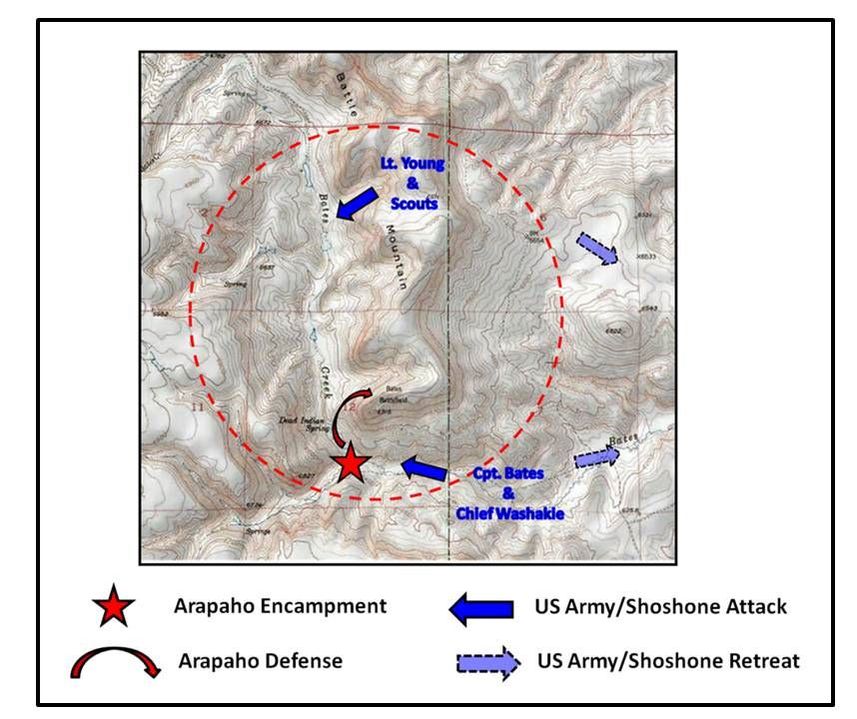 Best guess battle reconstruction from various accounts.
Image: Google Earth, USGS Earth Point Topo Map
​At 7:30 AM, on the Fourth of July 1874, the bugles of Company B of the 2nd Calvary sounded the charge and the battle began. Whether the engagement lasted only minutes or continued as long as four hours is debated. What is clear is that early Army success was squandered when the Arapaho gained the high ground on the resistant Wagon Bed Sandstone on Battle Mountain. The army had suffered two fatalities and three wounded. The Shoshone had two warriors killed and two injured. The Army, running out of ammunition, soon withdrew to Camp Brown (Fort Washakie).  On Arapaho casualties, two historians wrote:

"In Retrospect ~ Crystal-clear Bates creek, meandering through the peaceful little badland valley, flowed crimson that morning.  Within half an hour 29 known dead lay stiffening along the stream; among rocks and sagebrush.  Many more hostile Indians gave their lives in defense of the village.  Their exact number will forever remain a secret of surrounding buttes and draws.”
Knoefel, H.K., 1969, Wyoming's Bloodiest Fourth of July,
Northern Wyoming Daily News, Worland

“…other tribes would later refer to 1874 as ‘The Year they killed the Arapaho.’”
O’Gara, G., 2002, What You See in Clear Water
First Vintage Departures Edition, New York


Accounts vary on this skirmish, often with disagreements by all parties involved. The Bates Battle of 1874 and the Bennett Buttes Battle of 1878 (see Clarks Fork Canyon site, Park County) were the only two engagements between US Calvary and Indians within the Bighorn Basin. It was through the Arapaho exploitation of the butte topography along Bates Creek (the result of geologic processes) that they avoided annihilation. This latter punitive act by the US Army on a band of Native Americans not responsible for the previous summer’s trouble did little more than inflame the desire for revenge in the Arapaho. A revenge that was extracted on the Seventh Calvary near the banks of the Little Bighorn in two years’ time.