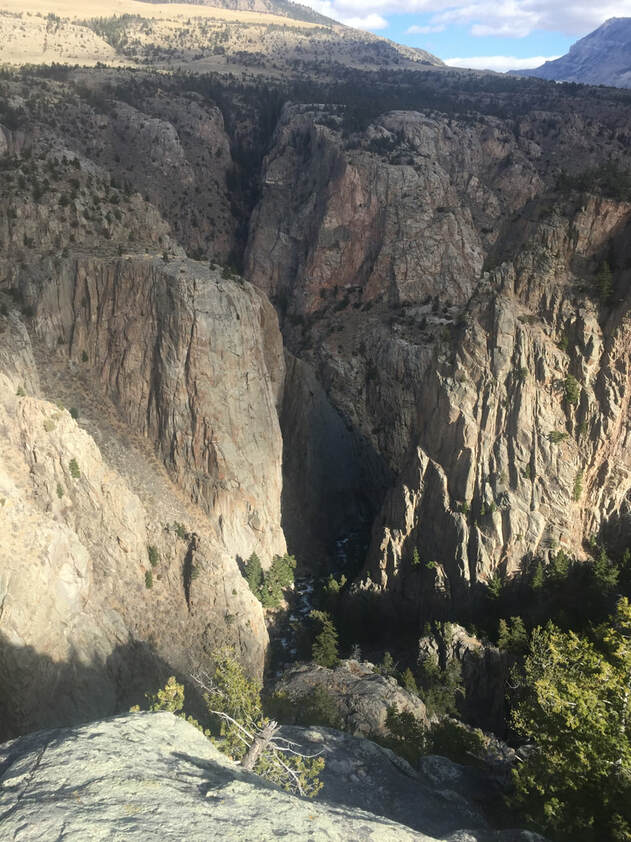 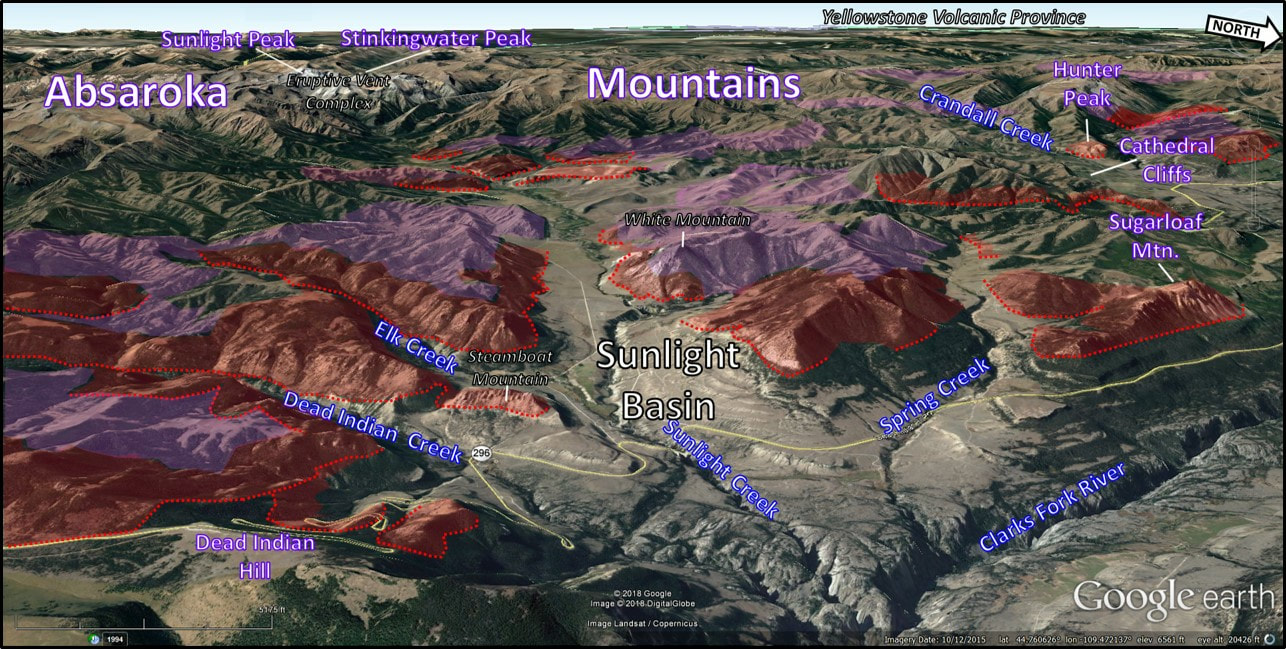 Sometime in the 1800s a group of prospectors or fur trappers were trapped in the mountains by a dense fog. When the sun finally broke through, the entire basin was flooded with sunlight (Urbanek, M., 2004, Wyoming Place Names). Someone is said to have remarked "the only thing that can get into this valley most of the year, is sunlight" (Wyoming Contractors Association, 2016, Facebook). The name Sunlight has been attached to the area ever since.

In the late 1830s, when bison disappeared from the Snake River Plain in Idaho, the Bannock tribe began annual migrations to the Plains in the east to hunt bison.  They followed the Bannock Trail through Sunlight Basin. Their last migration was in 1878 when they clashed with the U. S. Army.  The Nez Pierce under Chief Joseph followed the Bannock Trail through here in 1877 trying to avoid capture by the U.S. Calvary on their attempted escape to Canada.

The Aide-de-Camp for General Phillip Sheridan’s 1881 Army expedition wrote about their route over Dead Indian Pass. “We arrived in camp on the unnamed creek next west of Dead Indian Creek [Sunlight Creek] a little after noon, enthusiastic about and inspirited by the grand scenery surrounding us, but with knees a little shaky by reason of walking and sliding down the steep declivity spoken of, and at the same time managing our horses so they might not fall atop us should their footing give way.”  Gen. Sheridan noted that the descent of about 1,900 feet was in less than a mile. “Horse and man did considerable sliding in getting down the precipitous descent.”

Chief Joseph Highway (Wyoming Highway 296) follows the Bannock Trail route through Sunlight Basin and over Dead Indian Pass. Construction of the highway began in 1968, but due to steep terrain and unstable Cambrian and Devonian shales construction was not completed until 1995.

The Sunlight mining region (originally named Telluride) was active in the late 19th and early 20th centuries. The first claim was filed by John Painter in September of 1890. An early mining camp, Lee City, was founded on Sunlight Creek about two miles upstream of its confluence with Sulphur Creek. Eventually 1,111 claims were filed here, with 38% filed between 1890 and 1910. Most of the prospecting occurred within the six-year period 1903-1908. Several hundred feet of shafts and adits explored mineralized veins in the region. Known mineral deposits are associated with volcanic intrusive bodies. The 100 metric tons of ore (gold, silver, copper, and lead) sold in 1903 is the only known mining from the region. The value of the load is unknown. The area was never designated a mining district. A grab sample from the dump pile at Lee City prospect mine adit in 1980 assayed a trace of gold (Au), silver (Ag 0.2 oz/ton), copper (Cu 0.01 percent), lead (Pb, .02) and zinc (Zn 0.02 percent), which is probably a good average for the entire mining region. 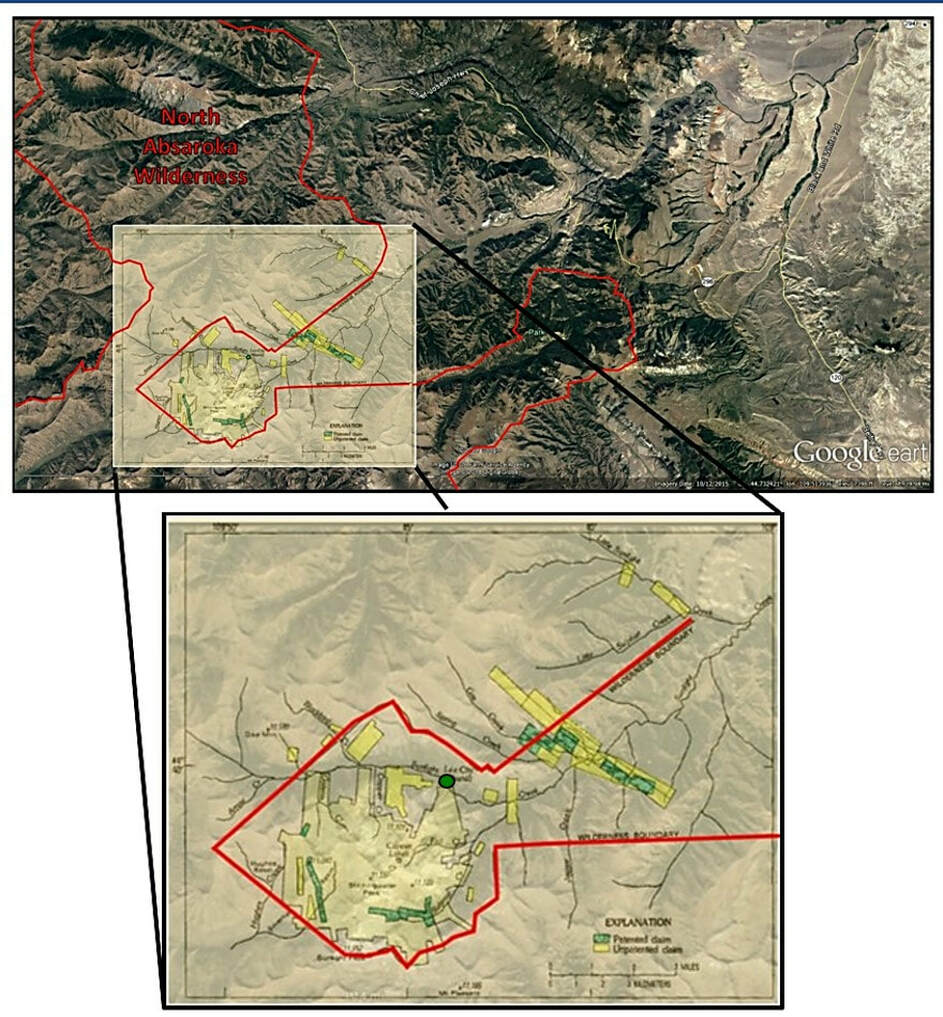 The Absaroka (pronounced ab-ZORE-kuh) Mountain Range are the remnants of a large volcanic field that was active for 10 million years during the Middle Eocene, 53-43 million years ago (see https://www.geowyo.com/absaroka-volcanic-province.html).  Two chains of large composite stratovolcanoes produced mainly andesitic and basaltic volcanic rocks. The rocks include lahar and flow breccias, lava flows, and tuffs that overlie Paleozoic and Mesozoic strata. Geologist Kent Sundell has suggested that an ancient basinal area he called the Absaroka Basin developed during the Late Cretaceous Laramide Orogeny that continued into the Tertiary. The Absaroka basin structures are buried beneath volcanic rocks and are poorly exposed along the edges of the volcanic pile.  Dikes and intrusions penetrate both the sedimentary sequence and volcanic rocks, often developing a radial, sunburst pattern around vent complexes. 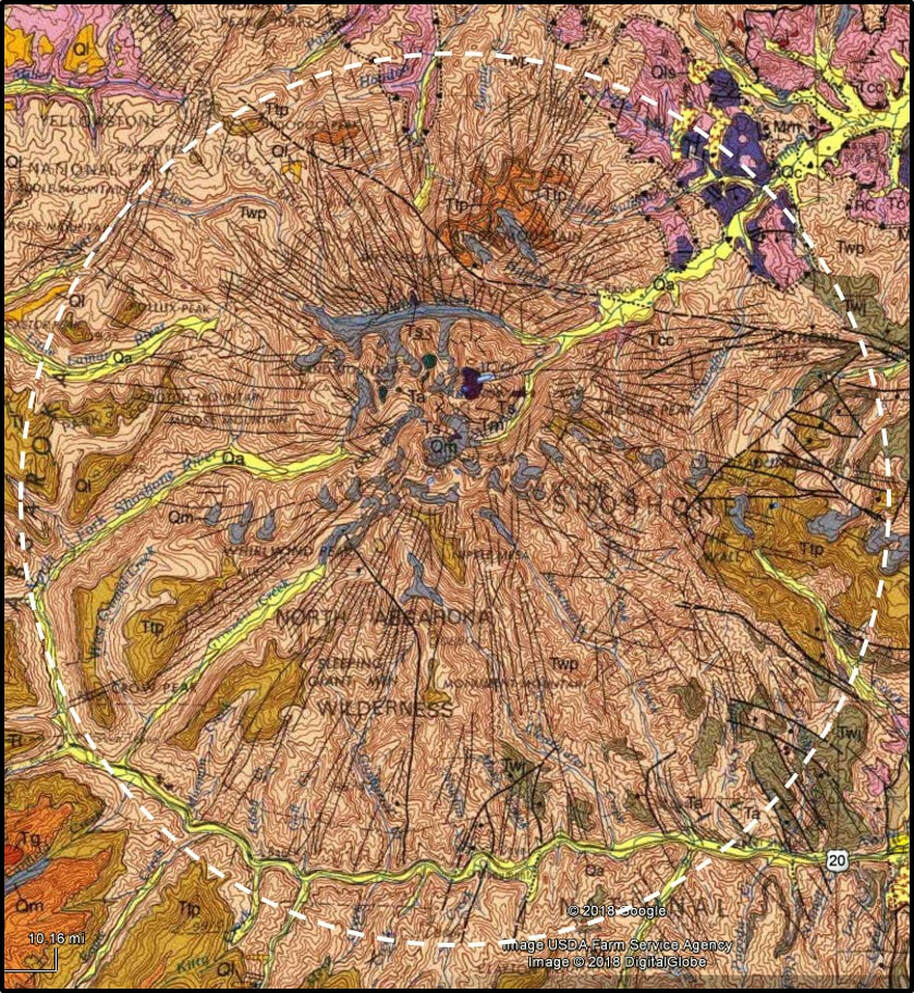 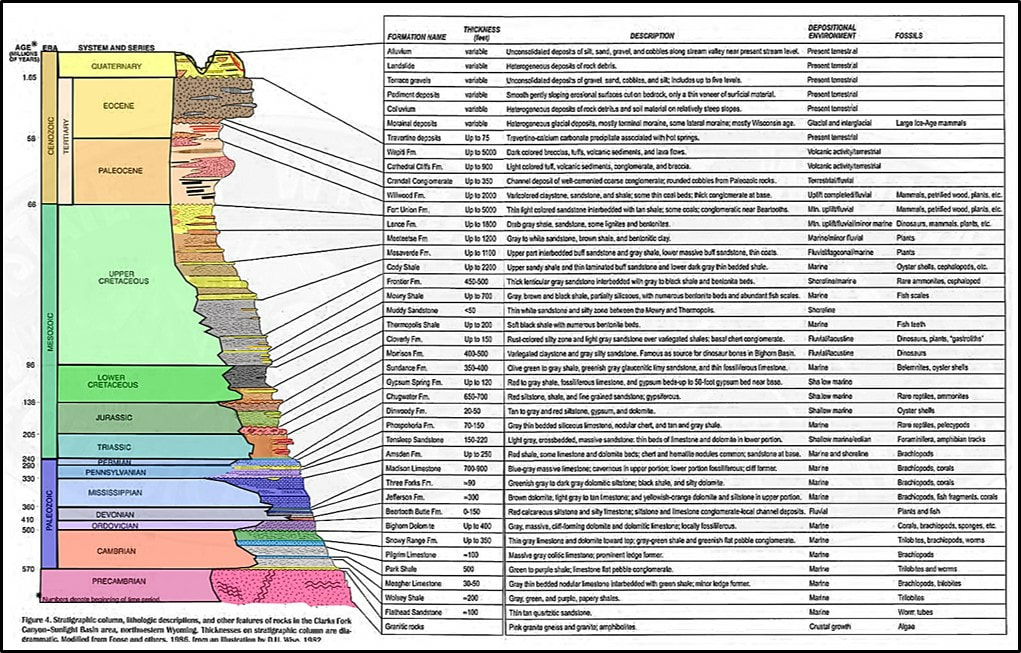 Sunlight Basin stratigraphic column.
Image: After Heasler, H.P., Jaworoski, C., Jones, R.W., De Bruin, R.P., Ver Plog, A.J., 1996, A Self-Guided Tour of the Chief Joseph Highway and Surrounding Area, Northwestern, Wyoming: Wyoming State Geological Survey Public Information Circular No. 35, Fig. 4, p. 8-9; http://www.wsgs.wyo.gov/products/wsgs-1996-pic-35.pdf.
The Heart Mountain Detachment fault is a flat-lying feature that lies beneath displaced blocks of Paleozoic sedimentary rock and Eocene volcanic rock. The mountain-size blocks of Paleozoic rock capped with chocolate brown volcanics visible from Dead Indian Hill overlook are all part of the world’s largest terrestrial landslide. This massive tonnage of rock moved catastrophically on a two-degree slope about 48.9 million years ago. Their movement was towards the overlook at incredible velocity. The entire area of detached blocks could have been emplaced in as little as a few minutes to hours.  Some of the blocks moved up to eighteen miles from their breakaway zone in the northeast corner of Yellowstone Park into Sunlight and Clarks Fork area, over Dead Indian Hill, and continued south and southwest on to the floor of the Eocene Bighorn Basin onto Willwood Formation. (see https://www.geowyo.com/heart-mountain.html; https://www.geowyo.com/dead-indian-hill.html; Tatman Mountain and Squaw Peaks link). 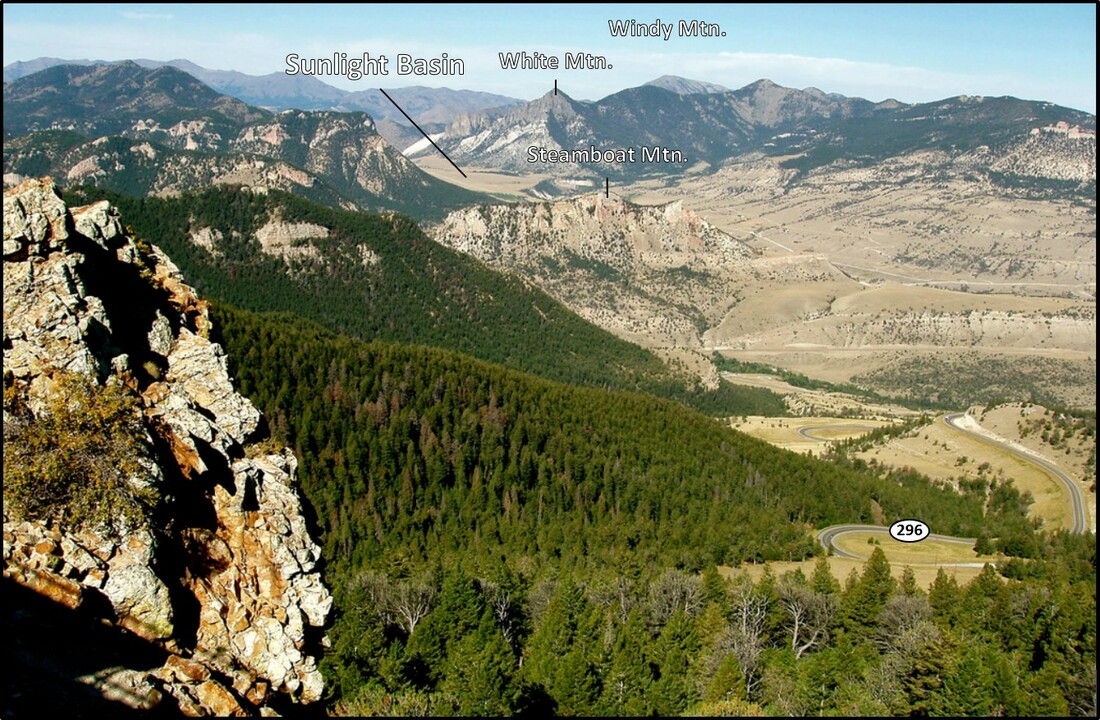 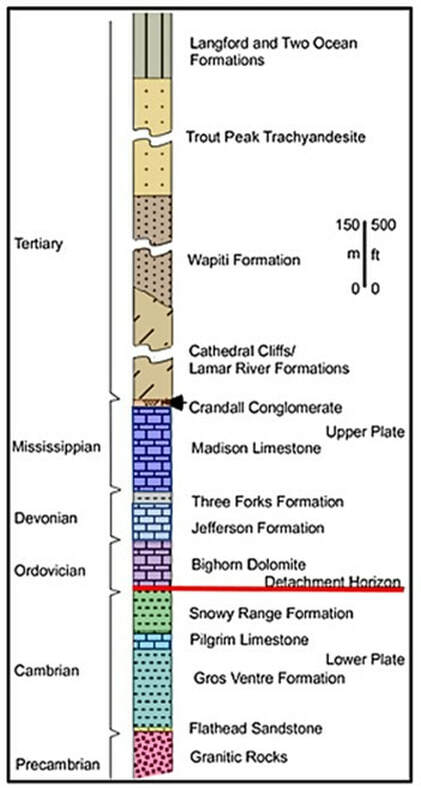 Generalized stratigraphic column of rocks in the areas where the Heart Mountain slide started. Lower-plate rocks below the fault range in age from Archean to Ordovician.  The detachment occurs along a bedding plane near the base of the Bighorn Dolomite (6 to 10 feet above its base). Detached (allochthonous) Paleozoic rocks range in age from Ordovician to Mississippian. Eocene volcanic rocks of the Cathedral Cliffs and Wapiti Formation were included in the slide event. The Trout Peak Trachyandesite and the Langford are undeformed, they are younger than the movement on the fault.
Image: After Malone, D.H., Craddock, J.P., Anders, M.H., and Wulf, A., 2014, Constraints on the Emplacement Age of the Heart Mountain Slide, Northwest Wyoming: Journal of Geology, Vol. 122. Fig. 2. P. 673; https://www.jstor.org/stable/10.1086/678279?read-now=1&seq=3#page_scan_tab_contents.
The best accessible exposure of the detachment surface near the breakaway area, and the cataclastic material associated with it, is at White Mountain on the north side of the Sunlight Basin. The southwest spur of the mountain is coarse-grain white marble. It is metamorphized Mississippian Madison Limestone from contact with the intrusive plug that stands vertically above the carbonate. The marble is cut by several dikes that occur only in the upper plate (“rootless”). There is no marble in the lower plate. The intrusion and metamorphism are therefore older than the movement of the Heart Mountain detachment. The marble and upper plate intrusions were transported to their present location with the detached blocks. 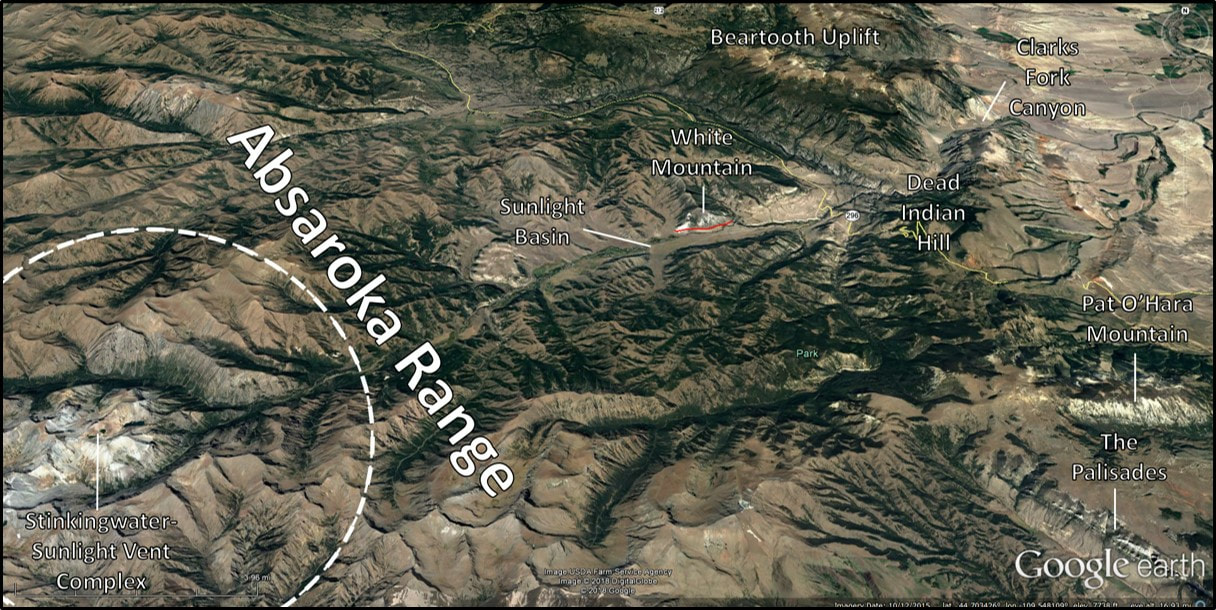 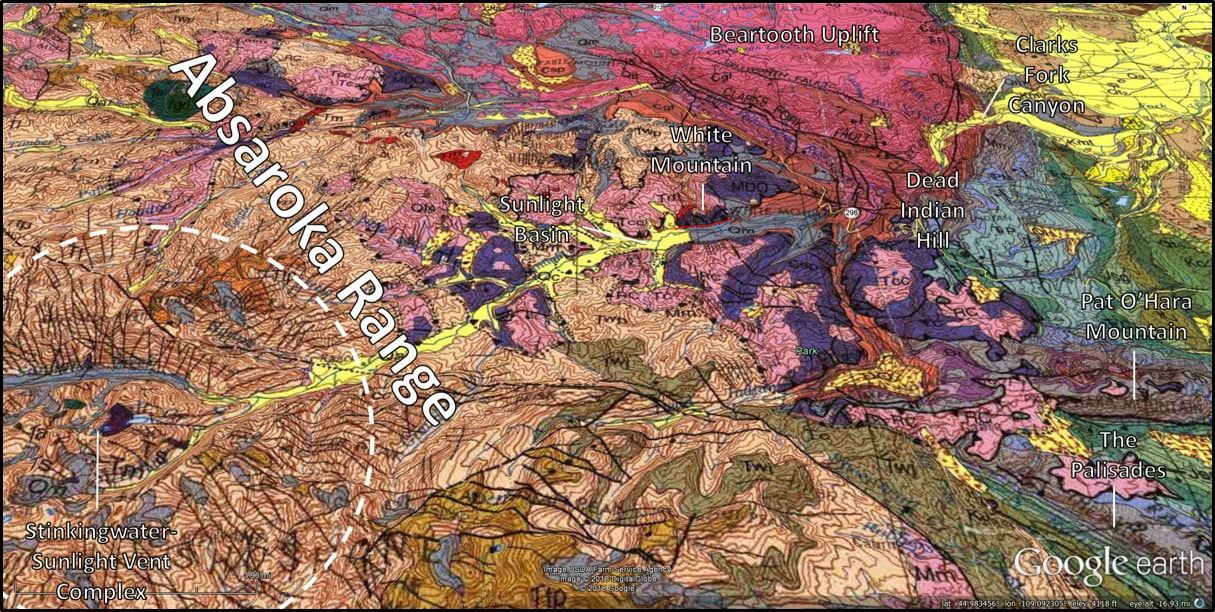 North view of White Mountain. Heart Mountain Detachment (HMD) shown by red dashed line. Diorite stock intruded about 48.9 million years ago (Ma) is to the right of the carbonate, temperature and pressure from that event caused the contact metamorphism of the Madison Formation to marble. Metamorphism occurred before movement of the HMD (48.9 Ma). The rock mass to the right of the diorite (east) is trachyandesite lava that was emplaced about 50 Ma.
Image: After Jones, G.L., 2018, Flickr; https://www.flickr.com/photos/wyojones/43736677870.
The view from the bridge on Wyoming Highway 296 (Chief Joseph Highway) over Sunlight Creek Gorge gives a spectacular view of the Archean basement rock of the Wyoming Craton. It is the highest bridge in Wyoming at 280 feet. 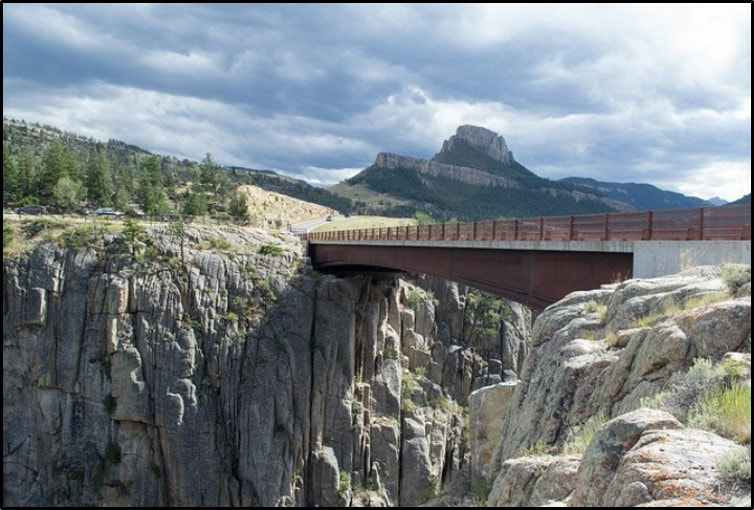 Sunlight Creek Bridge, Wyoming Highway 296. Note jointing in Precambrian rock. View is to the south toward detached blocks of Lower Paleozoic carbonate at the mouth of Sunlight Basin (south margin).
Image: Barrett, D, 2015,Chief Joseph Highway WY (#0537); https://www.flickr.com/photos/donbrr/21125037863/in/photostream
​No basement granite rocks crop out in the valley of Sunlight Creek, yet Precambrian granite boulders are scattered across the floor near the eastern mouth of the basin. Glacial moraines in the western part of the valley contain no Precambrian clasts. This suggests at least two episodes of glaciation with different source terrane. The Crandall Lobe flowed off the Beartooth Precambrian granitic terrane down Crandall Creek, then up the valley of Sunlight Creek due to the restricted outlet through Clarks Fork Canyon. The ice provided a dam to form Glacial Lake Sunlight. This ice lobe provided the transportation of Precambrian clasts to the valley’s eastern moraines. The Sunlight glacier flowed eastward from the Absaroka range provided volcanic clasts to the western moraines. The ice put the final topographic touches to the spectacular landscape. 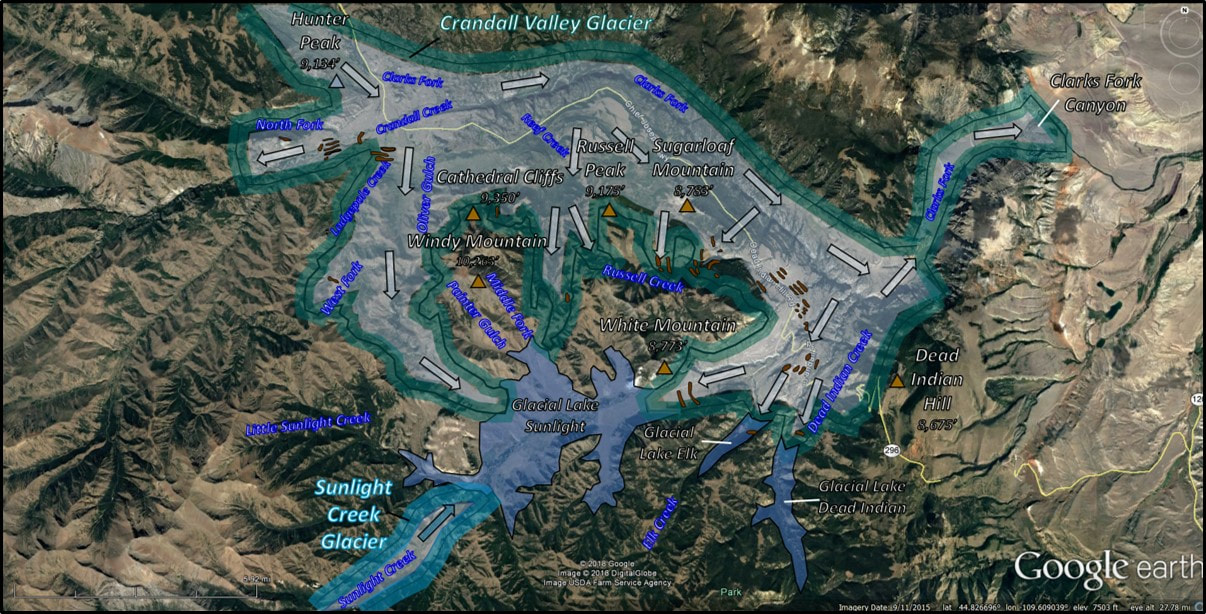 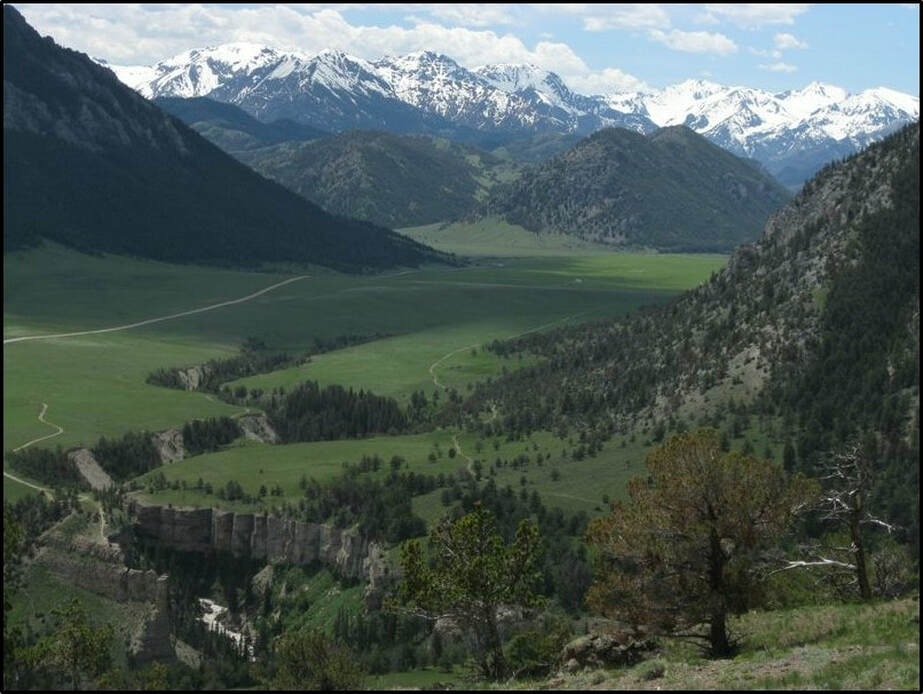 Things To Do in Sunlight Basin

Dead Indian Creek to Clarks Fork Canyon overlook hike:  Driving down into Sunlight Basin on the switchbacks from Dead Indian Hill on WY 296, turn right off the highway on a gravel road about one-half mile before the Dead Indian Campground. Drive on this unpaved road for about a quarter mile and park at the trailhead. Hike on mostly flat trail above and on east side of Dead Indian Creek for almost two miles until you reach the incredible views of the Clarks Fork Canyon. Most of the hike is at The Great Unconformity between the Archean basement and the overlying Cambrian Flathead Sandstone. Be extremely careful of the cliffs and decide for yourself what is safe. Because of the cliffs, this is not a safe hike for children. Return the way you came.

High Bridge over Sunlight Creek to Clarks Fork Canyon overlook hike: Driving down into Sunlight Basin on the switchbacks from Dead Indian Hill on WY 296, pass Dead Indian Campground, pass the Sunlight dirt road (101) on the left by 0.4 miles, pull in the parking lot on the right adjacent to the High Bridge over Sunlight Creek. The parking lot and most of the hike is at The Great Unconformity between the Archean basement and the overlying Cambrian Flathead Sandstone. There are multiple unmarked trails heading in different directions in this area. Pick a trail, or your own path, that heads to the northeast on the rolling to mostly flat area between Sunlight Creek and Dead Indian Creek. In about 1.5 miles, the area between the two creeks narrows to a ridge and you come to amazing views of the Clarks Fork Canyon, Sunlight Creek, and Dead Indian Creek.  Be extremely careful of the cliffs and decide for yourself what is safe. Because of the cliffs, this is not a safe hike for children.  Return the way you came. This should be a National Park! 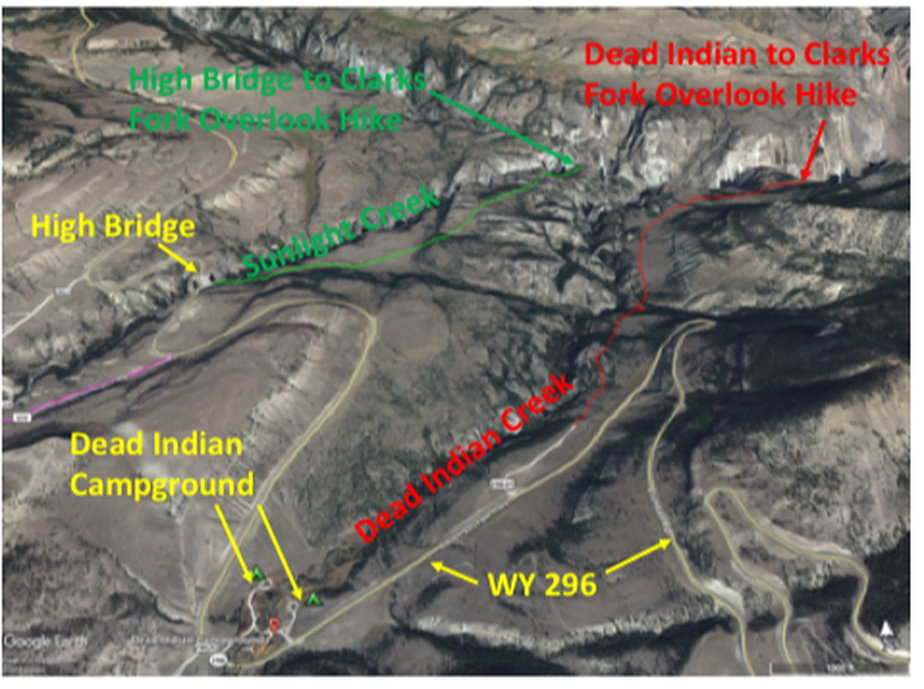 View into Clarks Fork Canyon from ridge between Sunlight Creek and Dead Indian Creek.
Photo by Mark Fisher
Copper Lakes hike: Driving down into Sunlight Basin on WY 296, pass Dead Indian Campground, turn left onto gravel Sunlight Road (101), and travel about twenty miles upstream along Sunlight Creek (high clearance 4WD recommended). You will pass the Sunlight Ranger Cabin on the left at about 8 miles, and Little Sunlight Campground on the right at about 10 miles. The last three miles of this drive is only open to vehicles from July 16 to September 30, but you can ride a mountain bike or hike the last part when it is closed. Just before reaching abandoned Lee City and Copper Lake trailhead, you reach a ford of Sunlight Creek. I rarely cross this ford with my vehicle because of high water. I park and wade across the creek. After crossing Sunlight Creek, walk 0.1 miles further up the road and turn left on a trail/two track that passes an abandoned mining cabin. The Copper Lake trail starts on the valley wall just past the cabin. Initially, the trail climbs up the valley wall in a downstream direction. Copper Lakes trail is steep and climbs 2,400 vertical feet over 2.2 miles (4.4 miles roundtrip). You can extend the hike by working your way around the left side of the lake and hiking to the Upper Copper Lakes just below Stinkingwater Peak. If you are hardcore and want a longer adventure, you can make a long loop hike by climbing the ridge above the uppermost Copper Lake and returning down to Sunlight Creek on an old mining road in Sulphur Creek. The Copper Lakes area is in the Sunlight/Stinkingwater volcanic vent complex with numerous dikes radiating outward. In this area are veins filled with silver, copper and lead minerals that are associated with the intrusives (see pages 34 to 51 in USGS Bulletin 1447).  AllTrails has additional descriptions and photos of the Copper Lake hike. Bring your bear spray.  Enjoy the solitude and spectacular views! 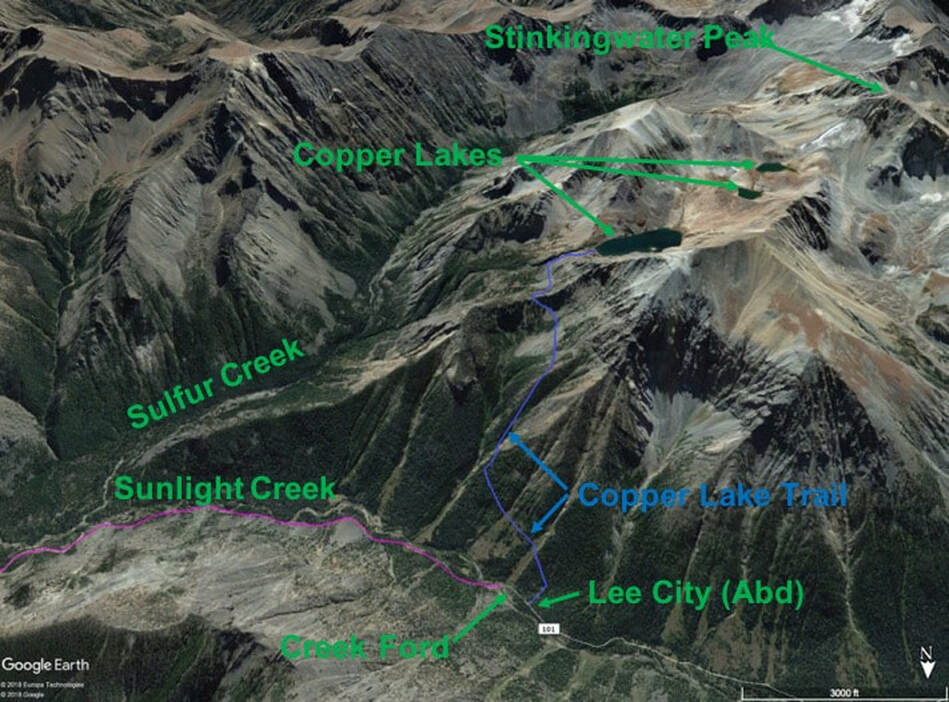 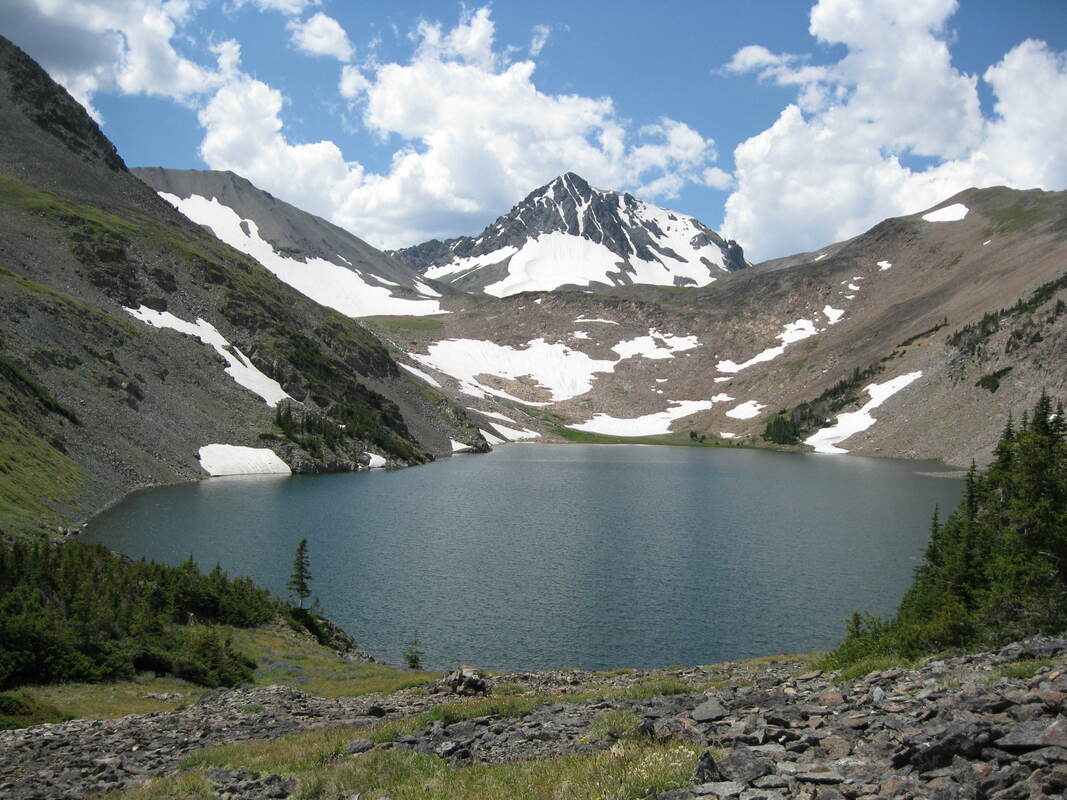