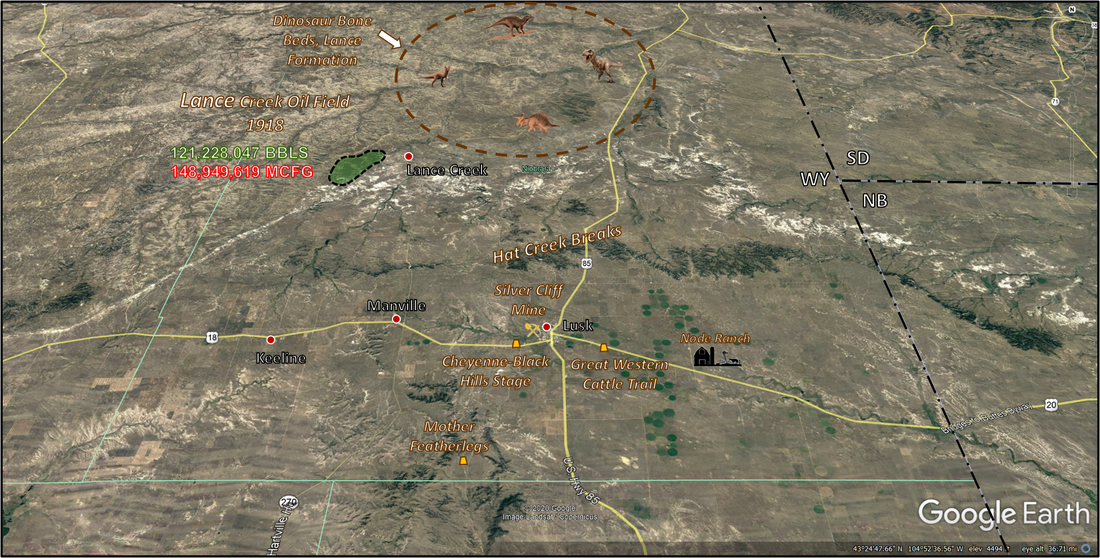 “Gold in the Black Hills” was the message carried by Charley Reynolds to Fort Laramie from the 1874 Custer Expedition. Gold fever ignited as the message got out when the dispatch rider reached Hat Creek Station (this 1875 military post and station are the first structures built by Euro-Americans between the Black Hills and Fort Laramie on Sioux land), about 13 miles north of future Lusk township. By 1876, the 300 mile Cheyenne to Black Hills Stage and Express Line was hauling supplies, gold, and gold-seekers across eastern Wyoming to and from the gold fields. Horse teams were changed about every hundred miles. Stage stations were established averaging about 10 to 15 miles apart along the route. Road agents maintained a steady income by robbing unguarded stages and passengers along the trail. The Stagecoach service ended in 1887 with the arrival of the Wyoming Central Railroad. 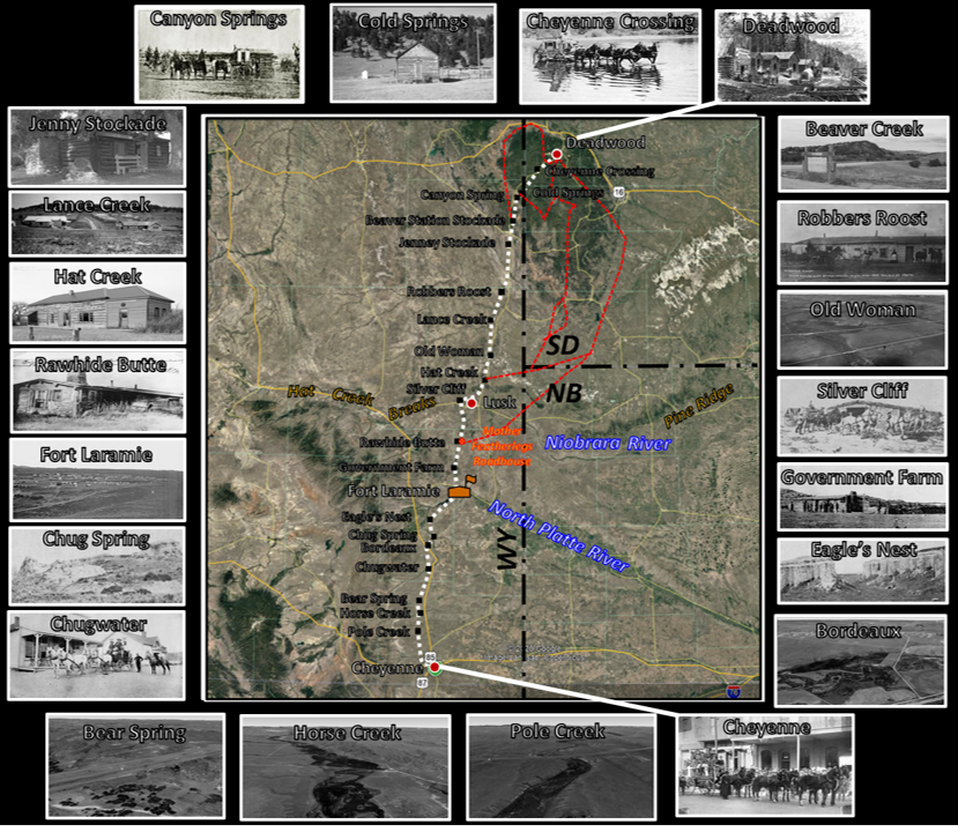 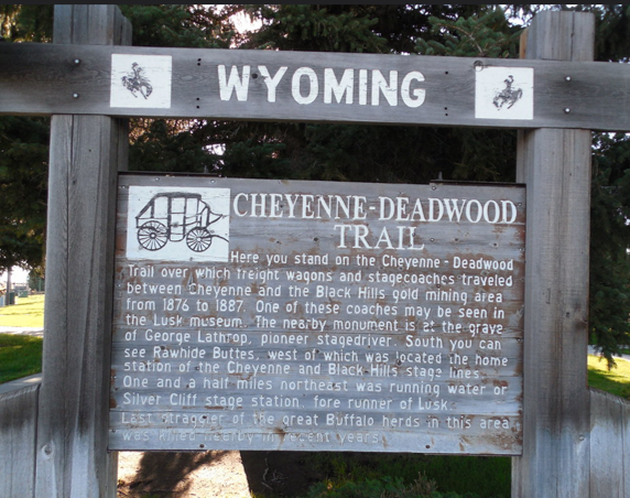 Cheyenne-Deadwood Stage Trail Marker located west of Lusk Wyoming on south side of U.S. Highway 20 at rest area.
​Image: https://www.flickr.com/photos/auvet/21305647399.
Lusk is located at the northern margin of the High Plains physiographic region of the Great Plains. Before the Black Hills gold discovery, the area had been Indian buffalo hunting ground. It was an established route to Fort Laramie through the Hat Creek military outpost. The herds fed upon the lush grass of the high plains. Frank S. Lusk established the Node Ranch in 1880 about 15 miles east of present-day Lusk. The operation was one of the first cattle ranches in the area. The Great Western Cattle Trail passed the future Lusk area, herding Texas Longhorns to the open range of the Wyoming, Dakota, and Montana Territories from 1876 to 1897.  The Wyoming cattle industry boomed from 1868 to 1886.  ​ 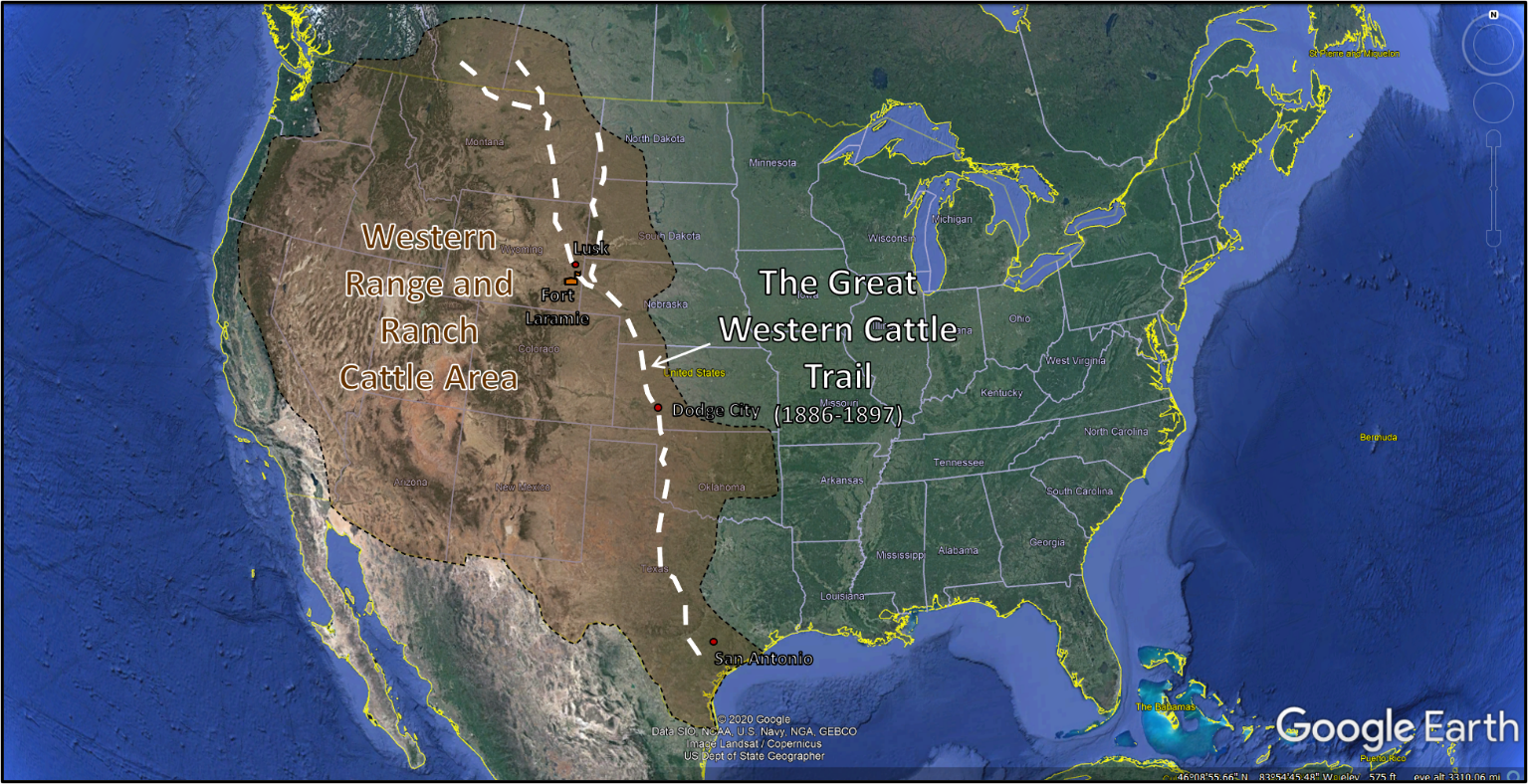 The Silver Cliff Mine (section 7, Township 32 North, Range 63 West) was discovered in 1879 near the crest of Silver Cliff Hill. Gold-silver-copper ore occurs in fault gouge and in the highly-fractured footwall sandstone along the Cambrian-Precambrian unconformity of a North 25 degree East trending reverse fault. The fault extends about 2,800 feet and has a maximum of 70 feet vertical offset at the top of the Precambrian rock. Ore assay reports 0.5% silver (Au), <0.02 to 10.88% copper (Cu); and 0.16 to 15.04% gold (Ag) (https://www.mindat.org/loc-7310.html). 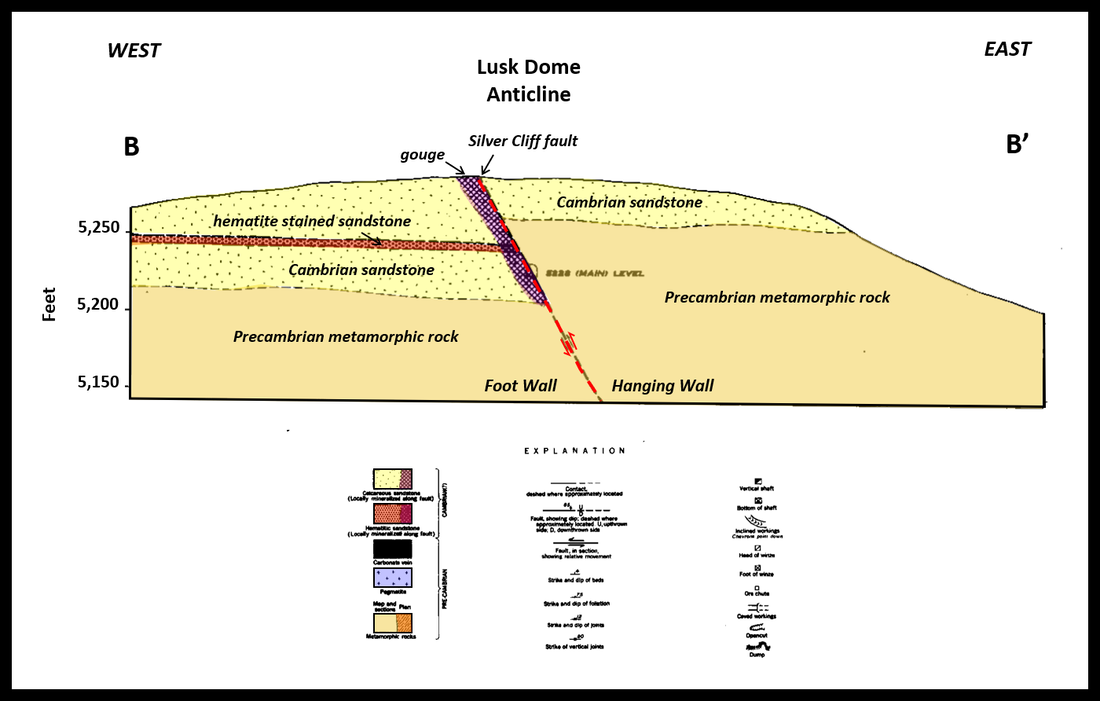 North view of Silver Cliff Hill mine (left) and mine dump (right).
​Image: https://www.mindat.org/loc-7310.html.
The origin of Lusk began in the mining tent town of Silver Cliff a half-mile to the west. In 1886, the townsite’s land was needed for the approaching railroad construction. Frank Lusk donated land to the east for a new town and Silver Cliff was quickly abandoned. The railroad named the new town after Lusk, who also happened to be the lone resident stockholder in the Wyoming Central Railroad. ​

Lusk, 1886 (original townsite land donated by F.S. Lusk).
​Image: https://www.townoflusk.org/.
The mining operations ended in 1884 and remained closed for 34 years when a uranium deposit was found. The radioactive ore was mined for four years for radium research and again, after World War II, from 1951 to 1953. The Silver Cliff Hotel (1918-1980s) in Lusk offered radium water and baths to guests until they lost popularity after the death of Eben Byers an industrialist and golfer. The socialite died from radiation induced cancers in 1932. Ore samples yielded 0.001 to 3.39% uranium oxide (U3O8) (https://www.mindat.org/loc-7310.html). This was the first recognized uranium deposit in Wyoming. 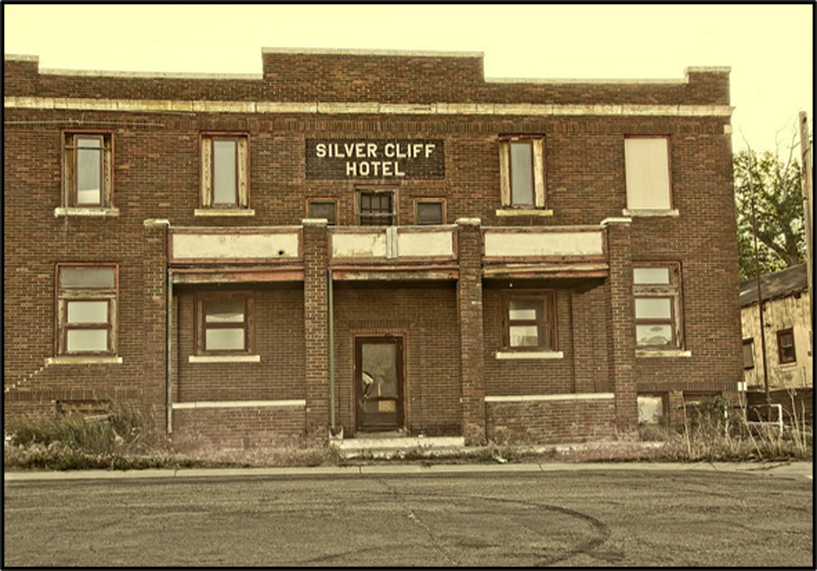 Charlotte Shepard came to Lusk area in 1876 and opened a sporting establishment west of Rawhide Buttes adjacent to the stage road where gambling, whiskey, and prostitutes were served. The roadhouse madam was called “Mother Featherlegs” because of the appearance of her pantalettes in the Wyoming wind. She was murdered during a robbery by her associate "Dangerous Dick Davis the Terrapin" in 1879. A memorial marker stands at her grave about ten miles south of Lusk and five miles north of Rawhide Butte station. This is supposedly the only memorial marker to a prostitute in the United States. The monument reads:

“Here lies Mother Featherlegs. So called, as in her ruffled pantalettes she looked like a feather-legged chicken in a high wind. She was roadhouse ma'am. An outlaw confederate, she was murdered by "Dangerous Dick Davis the Terrapin" in 1879.” 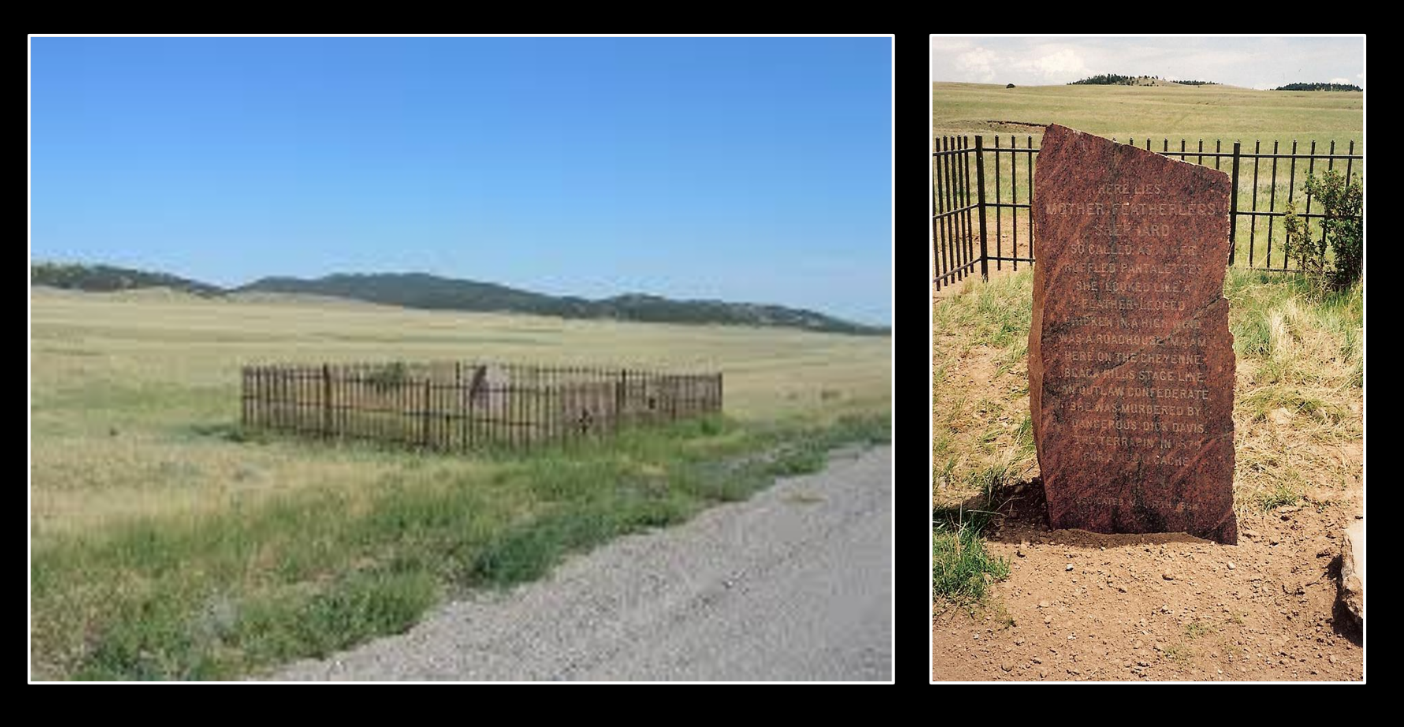 Mother Featherlegs graveyard (left), Rawhide Buttes in the distance, and granite headstone marker (right).
​Image: http://www.motherfeatherlegs.com/the-1964-monument-dedication.html.
A more successful entrepreneur, Madam Dell Burk, ran a brothel on West Griffith Boulevard one block from the Main street of Lusk for 60 years (1919-1979). She was born Mary Ada Fisher in 1888. Dell arrived in Casper Wyoming in 1917 and operated in the Sandbar district until Wyoming passed the 18th Amendment and declared war on vice. She and her partner Bessie Housley moved to Lusk in 1919. Together they operated the Yellowstone Hotel bordello that was conveniently located across from the railroad station. At five PM every day Dell would ring a bell on the porch of her establishment to inform customers that the business hours had begun. Dell died in 1981 at the age of 93. Dell is remembered for her business acumen and philanthropy. 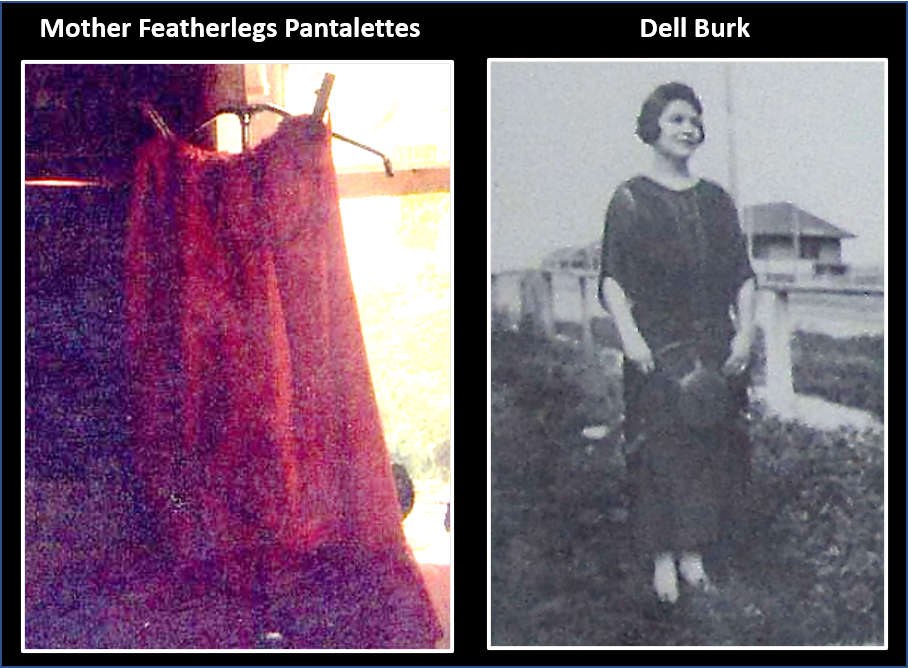 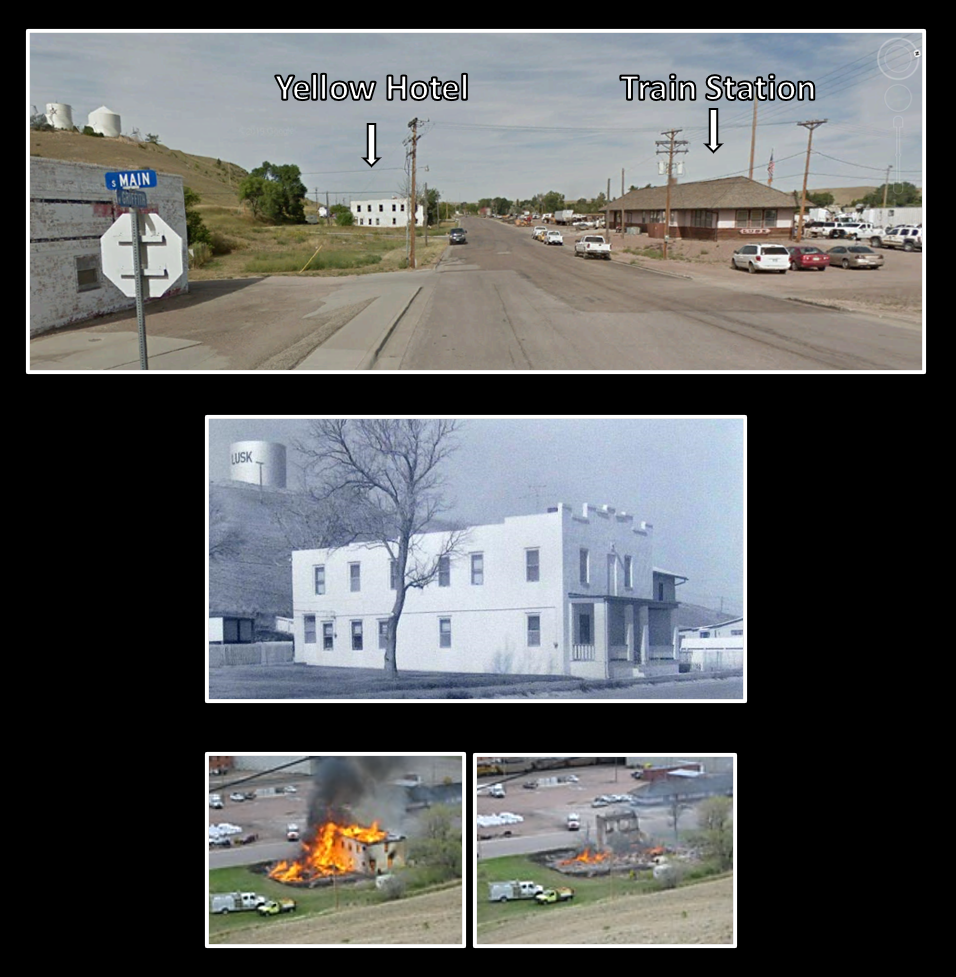 Yellow Hotel across from the Lusk train depot (top) and a southwest looking photo from 1979 (center). The name comes from the yellow exterior painted stucco of the building. The building was intentionally burned down in 2012 (bottom).
​Image: Top: Google Earth Street View; Center: https://www.pbs.org/video/dell-burke-and-the-yellow-hotel-jhusn6/; Bottom: https://www.townoflusk.org/?SEC=D35EEF2D-8BC1-4F62-B98F-9057EF942209.

About two billion years before the present landscape developed, the Lusk area was near the Cheyenne Belt tectonic zone. This area was the tectonic suture between the Archean age Wyoming craton and the Proterozoic island arc and basins of the Central Plains Province (Yavapai). The northeast orientation of the Cheyenne Belt basement feature is repeated during the Laramide mountain building event (70 to 50 million years ago) that produced the Hartville Uplift, Lance Creek anticline and other structures in the region. 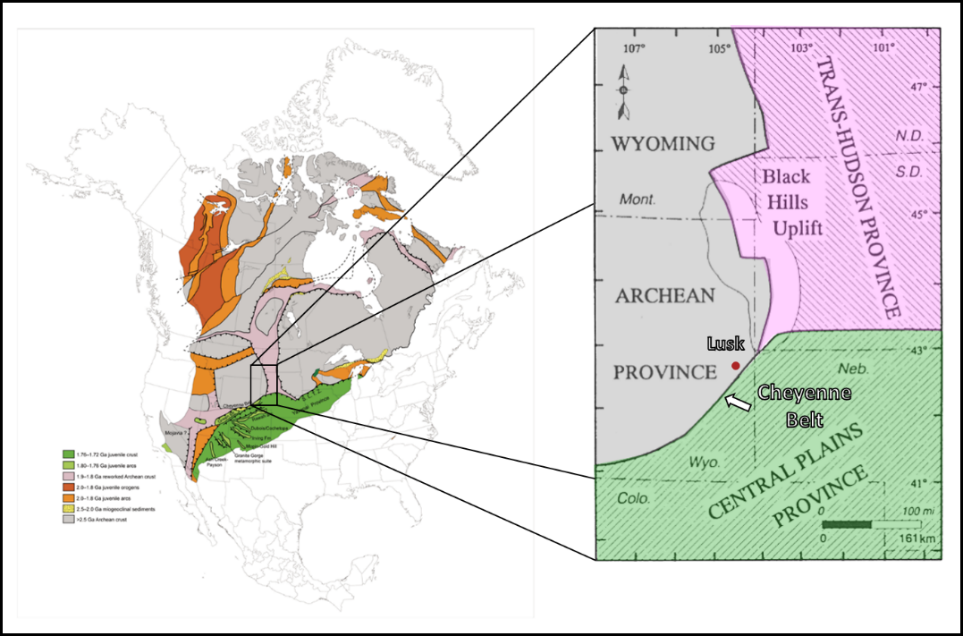 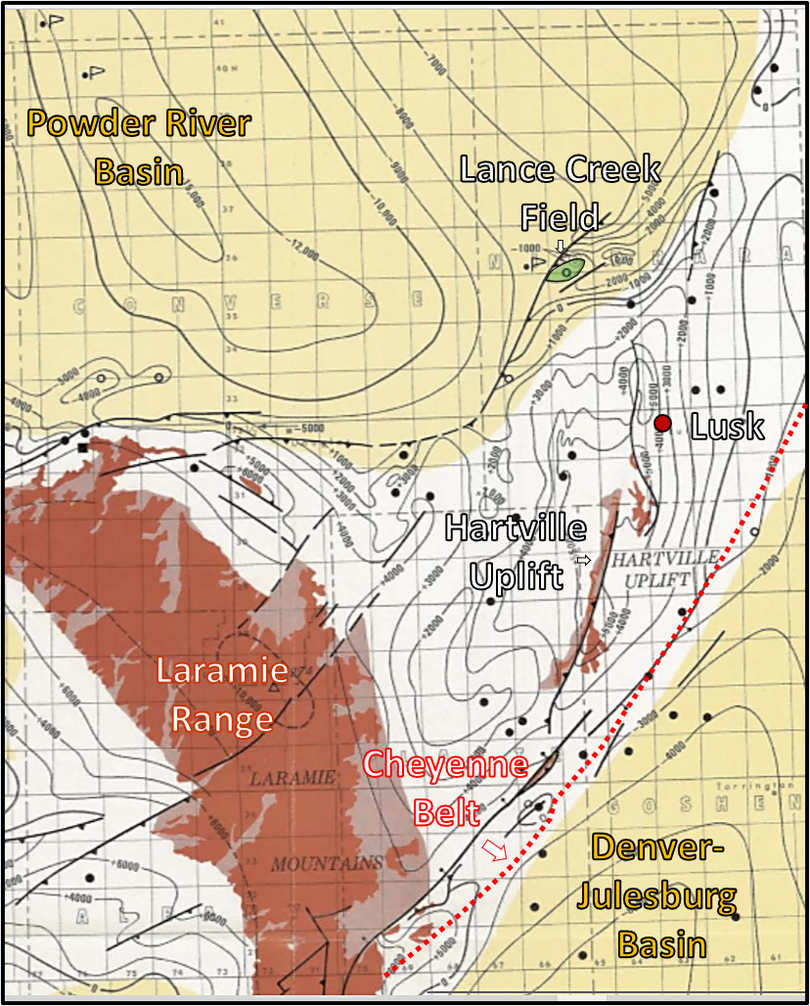 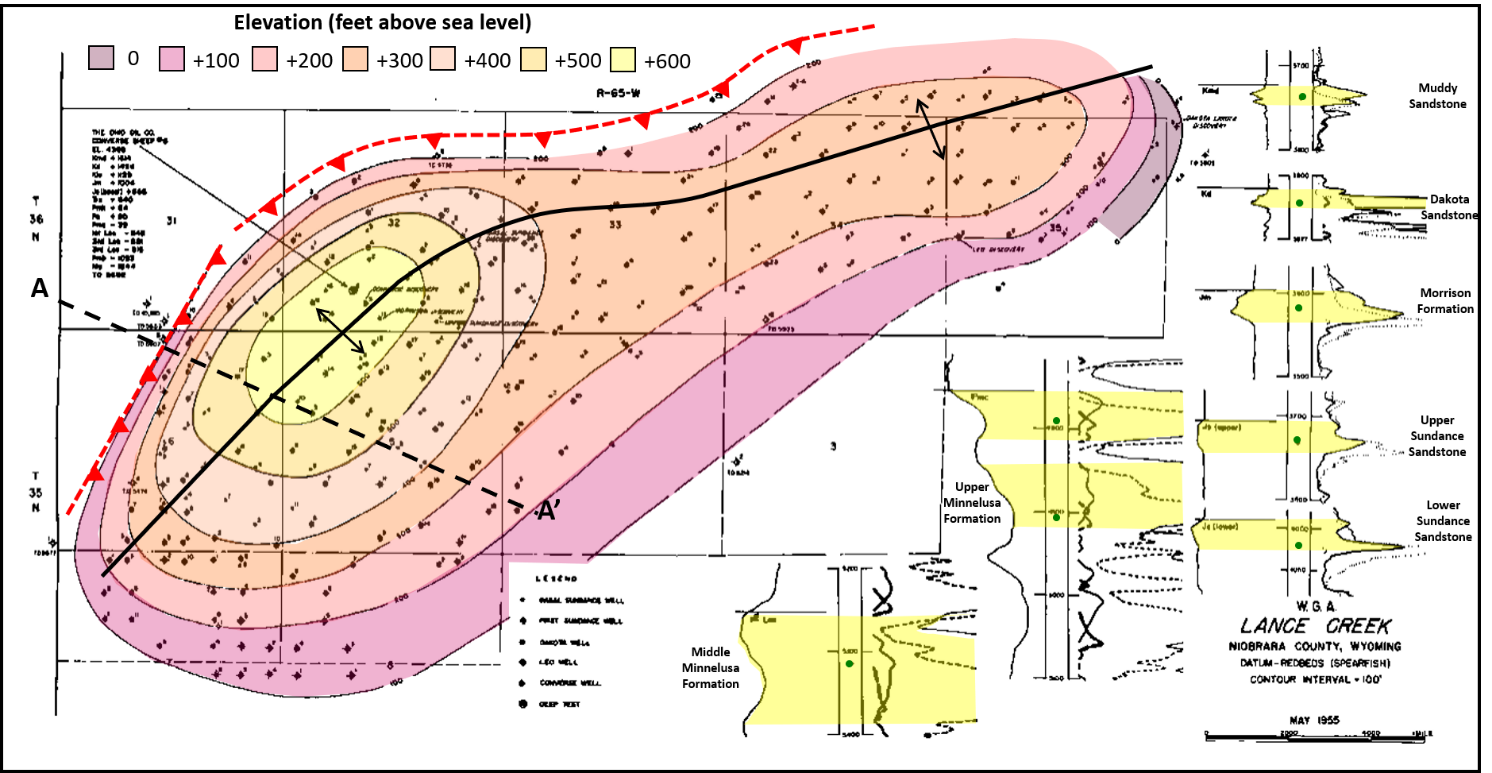 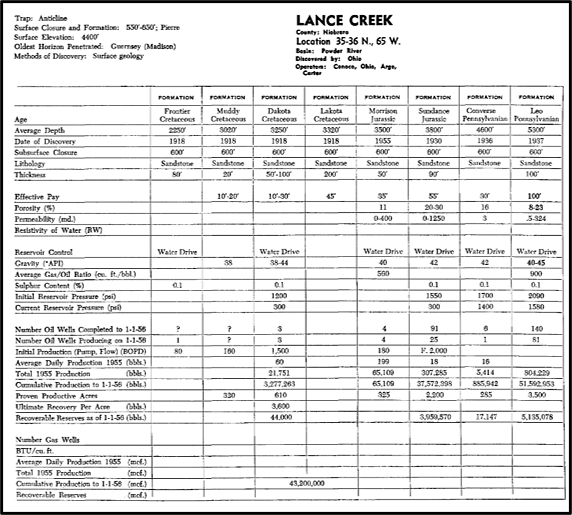 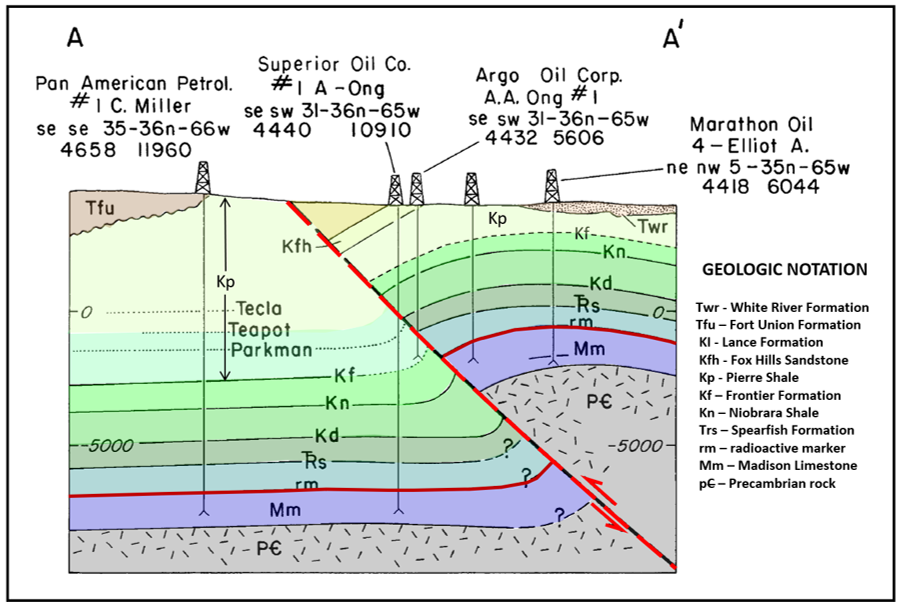 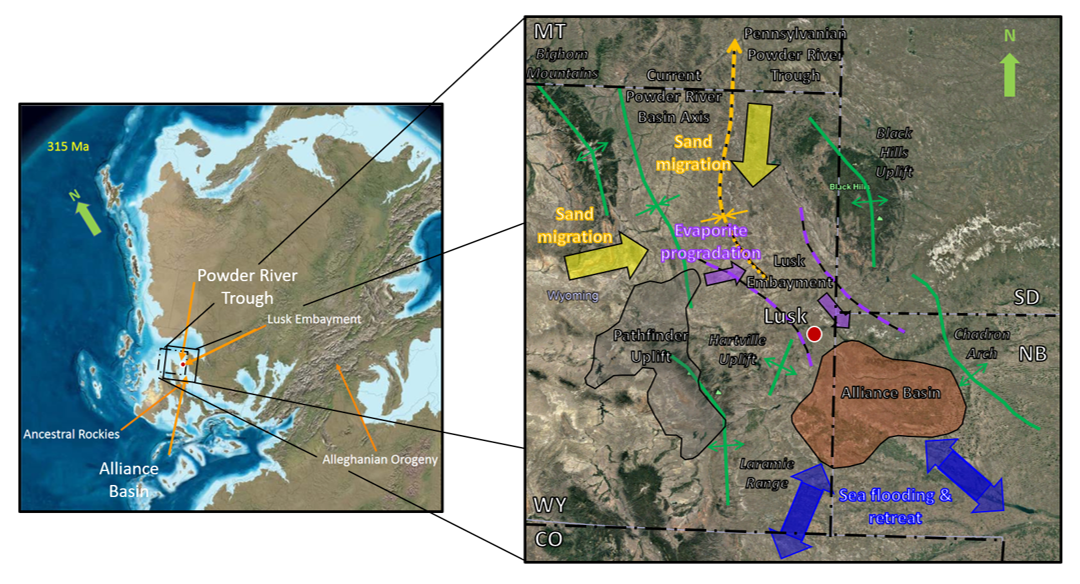 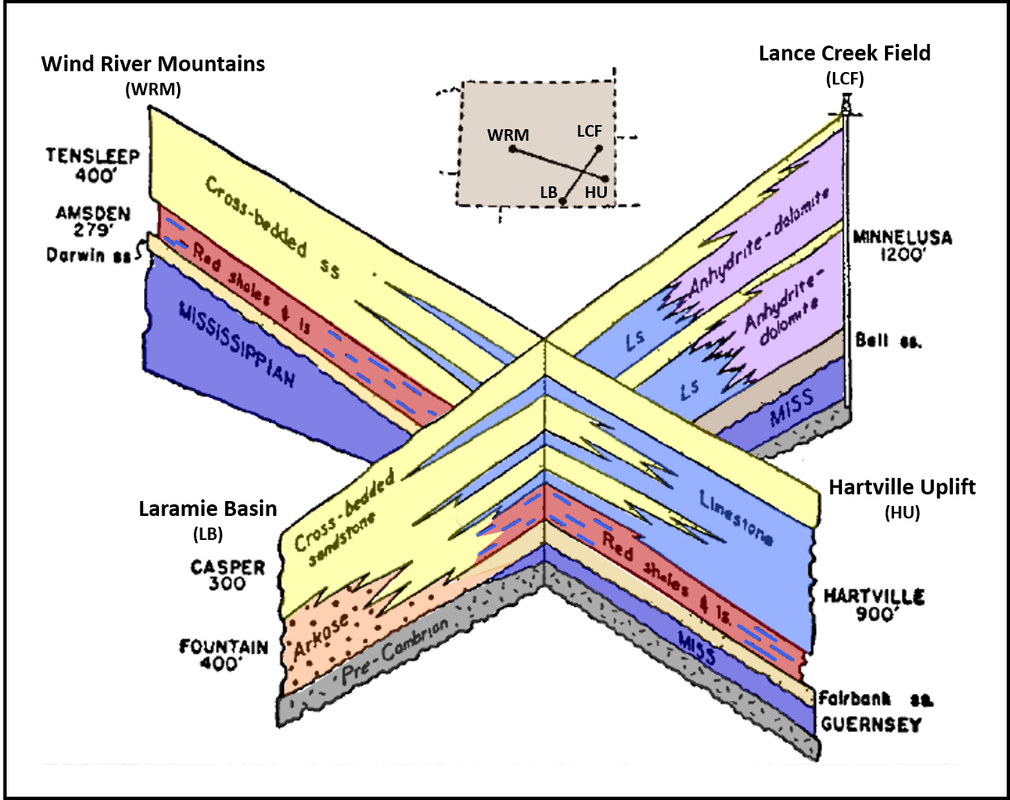 Stratigraphic diagram showing the distribution and relations of the Pennsylvanian rocks in southeastern Wyoming. Sandstone dominates the northwest, arkosic sandstone in the southwest area, evaporites are found in the restricted embayment in the northeast and carbonates are mainly developed in the seaway to the southeast.
​Image: After Thomas, H.D., 1961, Geologic Structure and History of Wyoming: Wyoming Oil and Gas Fields Symposium (Includes 1961 Supplement), 1957, Fig. 7, p. 18.

​Lance Creek oil boom was over by the mid-1980s, but the area remained famous for dinosaur bones collected from the Cretaceous Lance Formation. Fossils include Triceratops, Edmontosaurus, and Pachycephalosaurus. A recent Tyrannosaurus rex was discovered north of Lusk and is on display at the Tate Museum in Casper.
​
Sixty-eight million years ago large ancient rivers drained the area into the Cannonball Sea to the east and north. The source of the Lance sediments deposited in the Lusk area were probably the clastic sedimentary rocks overlying the future Granite Mountains, Wind River and Owl Creek Ranges to the west. Paleocurrents and grain size distribution support this provenance. 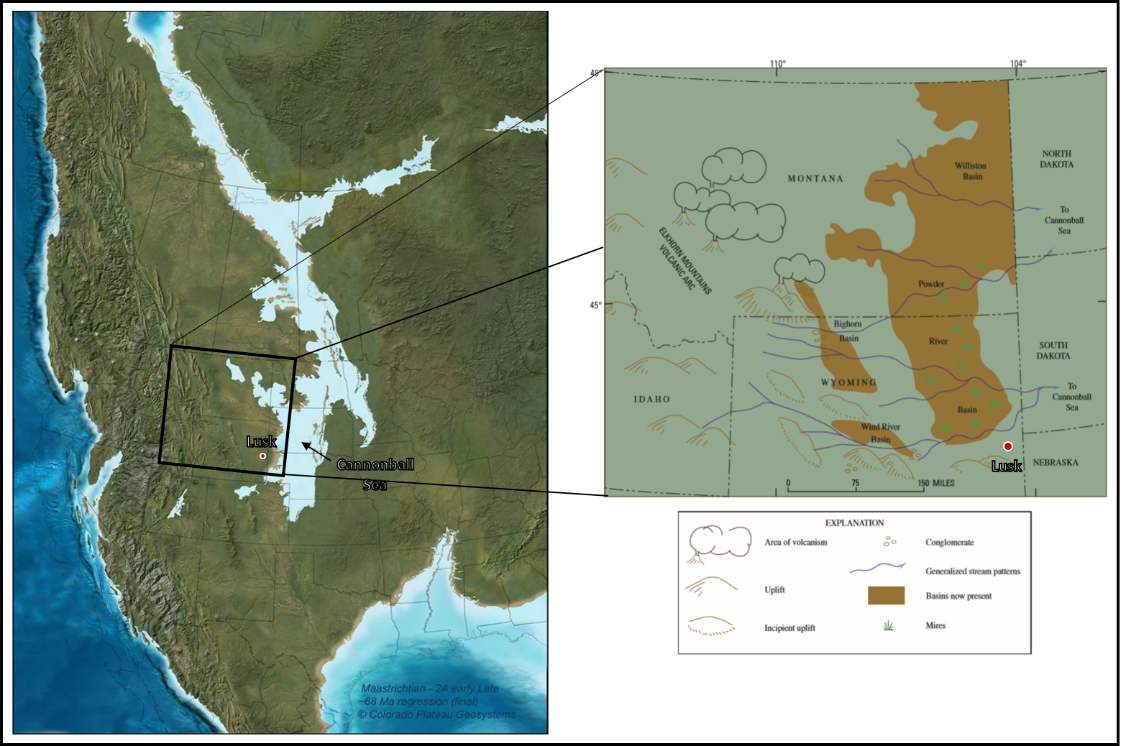 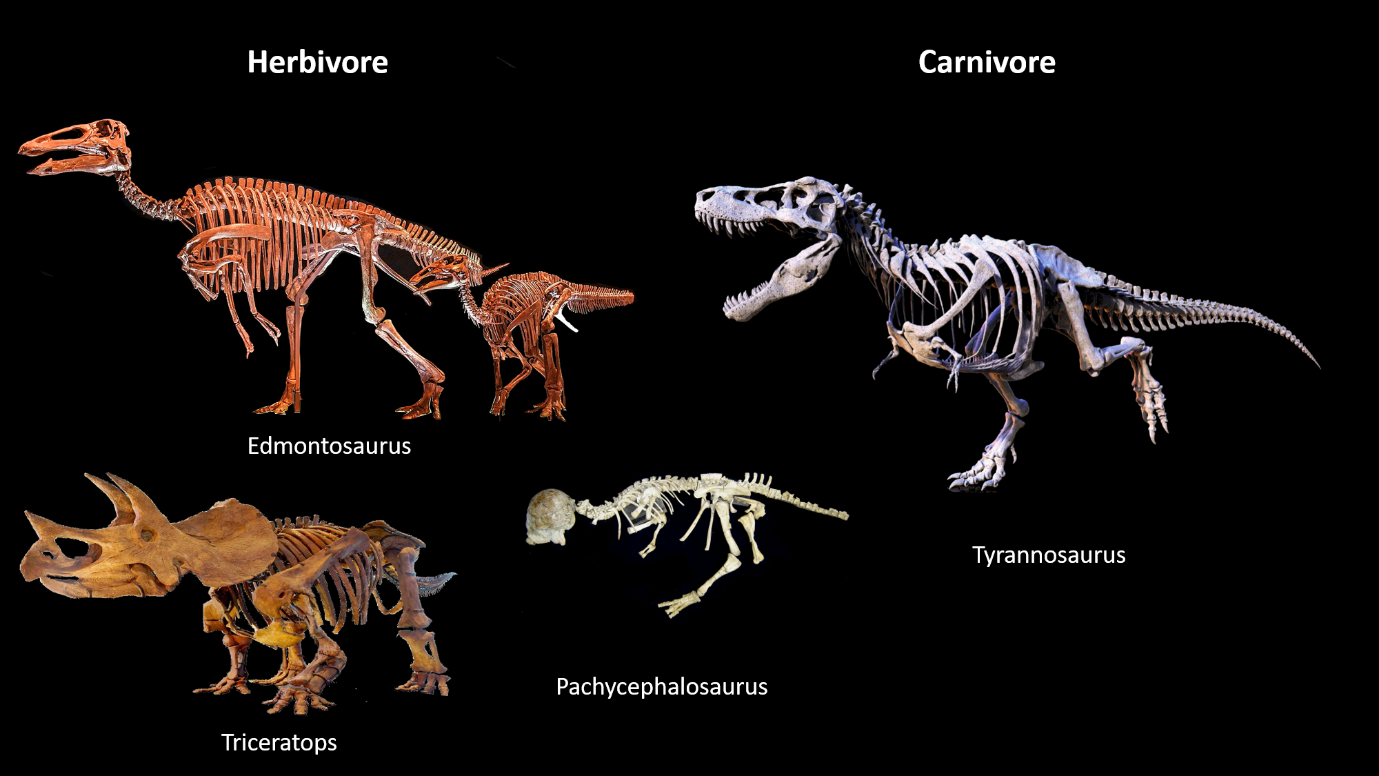 Dinosaurs of the Lance Formation in the Lusk area. Only five Tyrannosaurs have been discovered in Wyoming. The most recently found fossil is named Lee the T-rex.
​Image: After Triceratops: https://commons.wikimedia.org/wiki/File:LA-Triceratops_mount-2.jpg,  Edmontosaurus:https://www.wikiwand.com/en/Edmontosaurus_annectens, Pachycephalosaurs: https://paleonews.wordpress.com/tag/skin/,Tyrannosaurus: https://www.pinterest.com/pin/552535448032620637/. 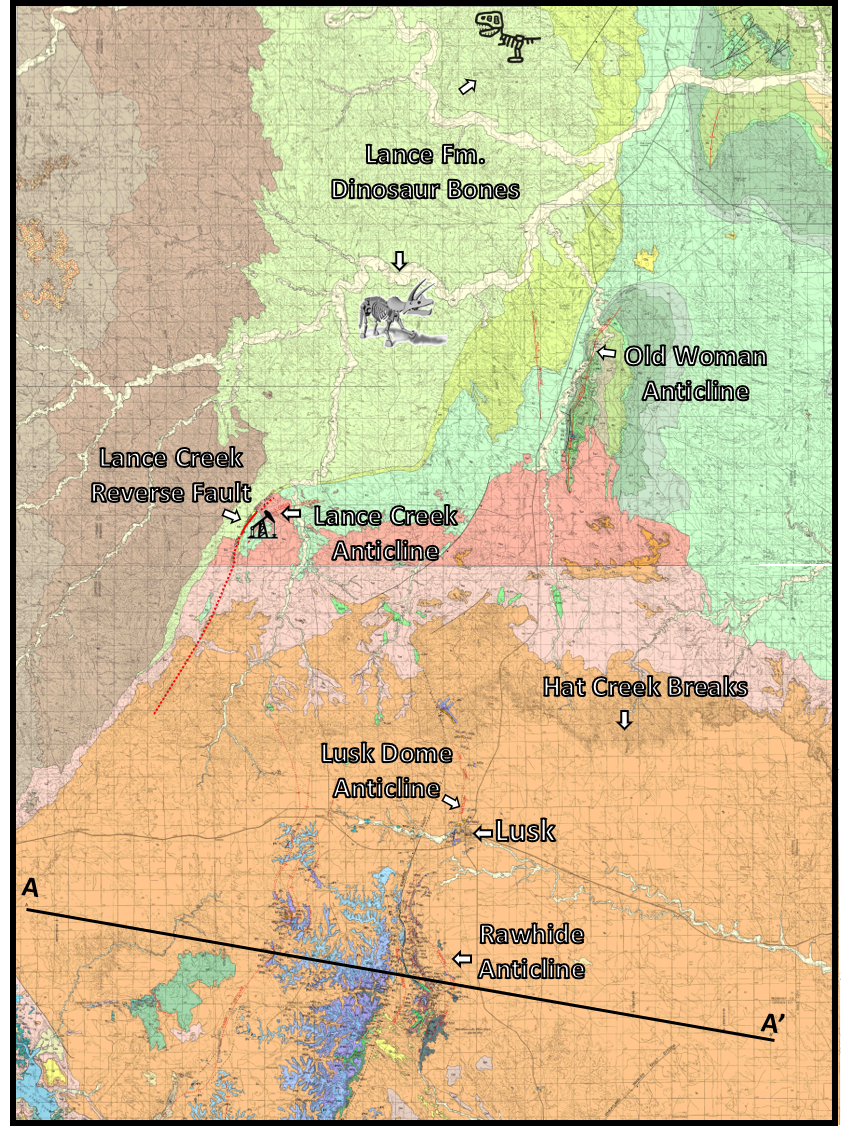 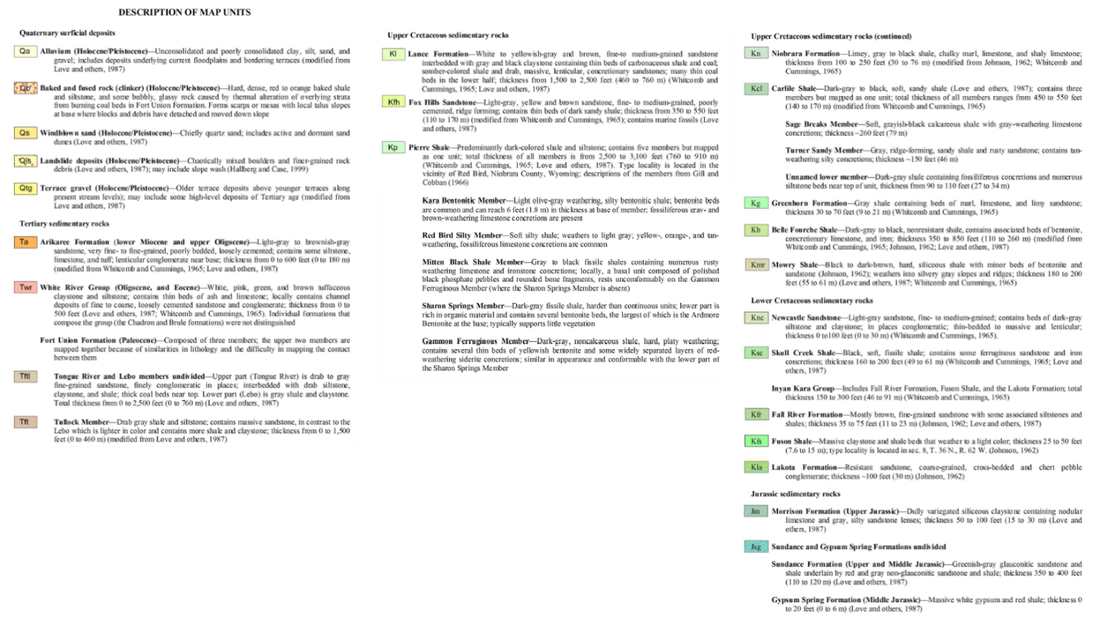 Composed of Tertiary sedimentary rocks of Oligocene and Miocene age, the Wyoming High Plains is dominated by three formations on the surface. From oldest to youngest, these are the White River, Arikaree and the Ogallala Formations. Together they form the High Plains aquifer system in southeast Wyoming which is the main groundwater source in this area. Almost flat-lying, these formations slope gradually from the Laramie Mountains eastward to the Great Plains.

The northern margin of the Wyoming High Plains region is defined by Hat Creek Breaks-Pine Ridge, a continuous escarpment that rises 300 feet above the low land of the Missouri Plateau to the north. The Southern margin is formed by the Chalk Bluffs of northernmost Colorado. This 300-foot escarpment was carved by headward erosion by tributaries of the South Platte River. 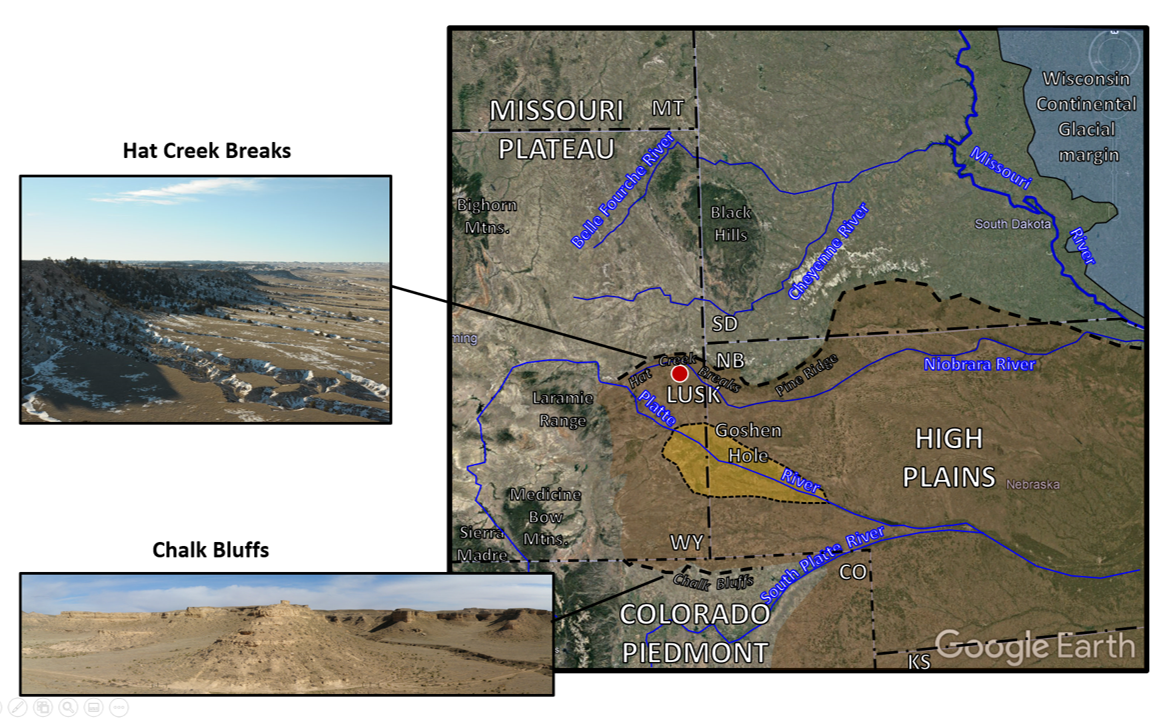 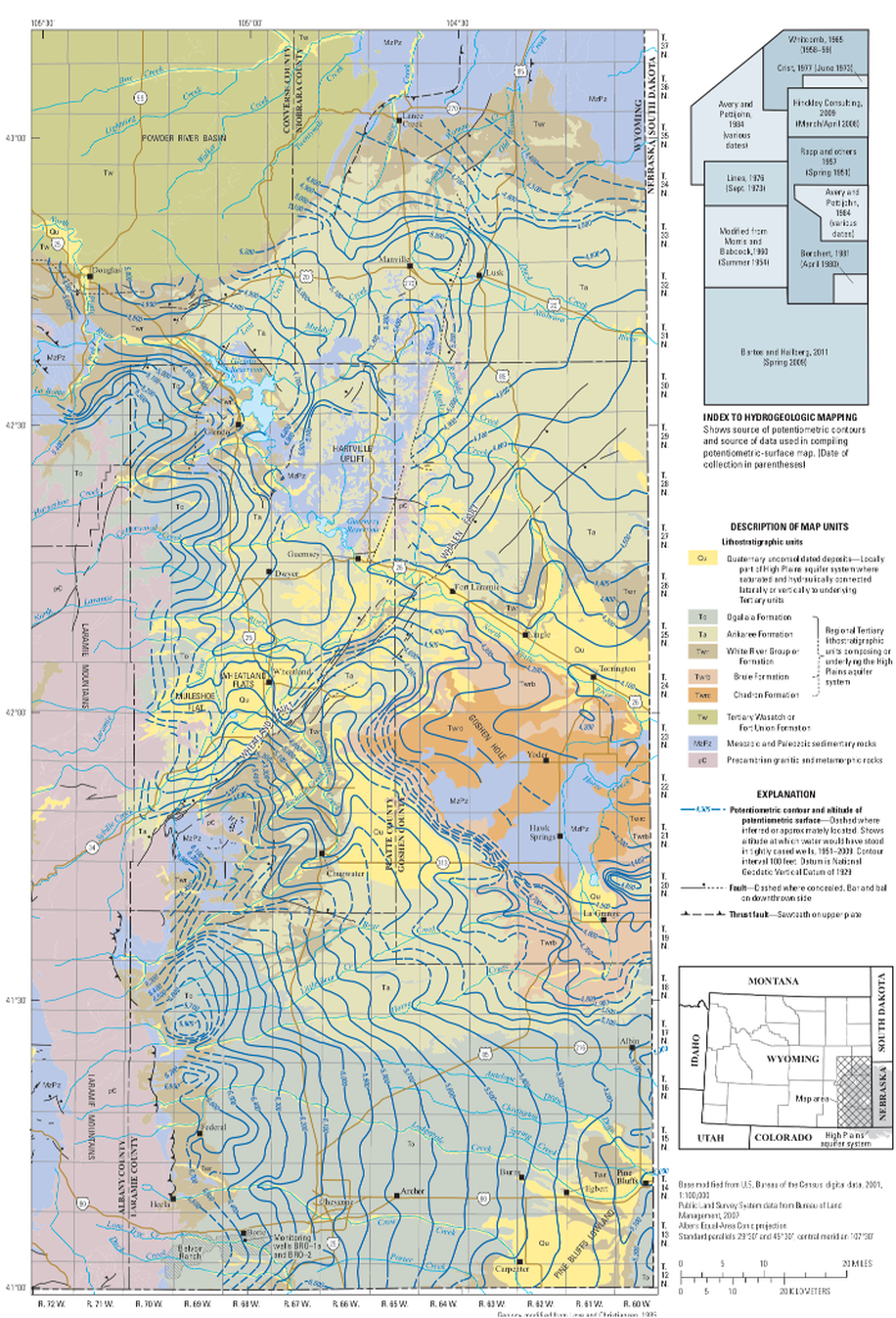 The Mid to Upper Miocene Ogallala Formation is the youngest formation on the Wyoming High Plains. It consists of weakly to firmly cemented conglomerate, sandstone, siltstone and mudstone deposited by streams in a complex sequence of cut and fills. ​ 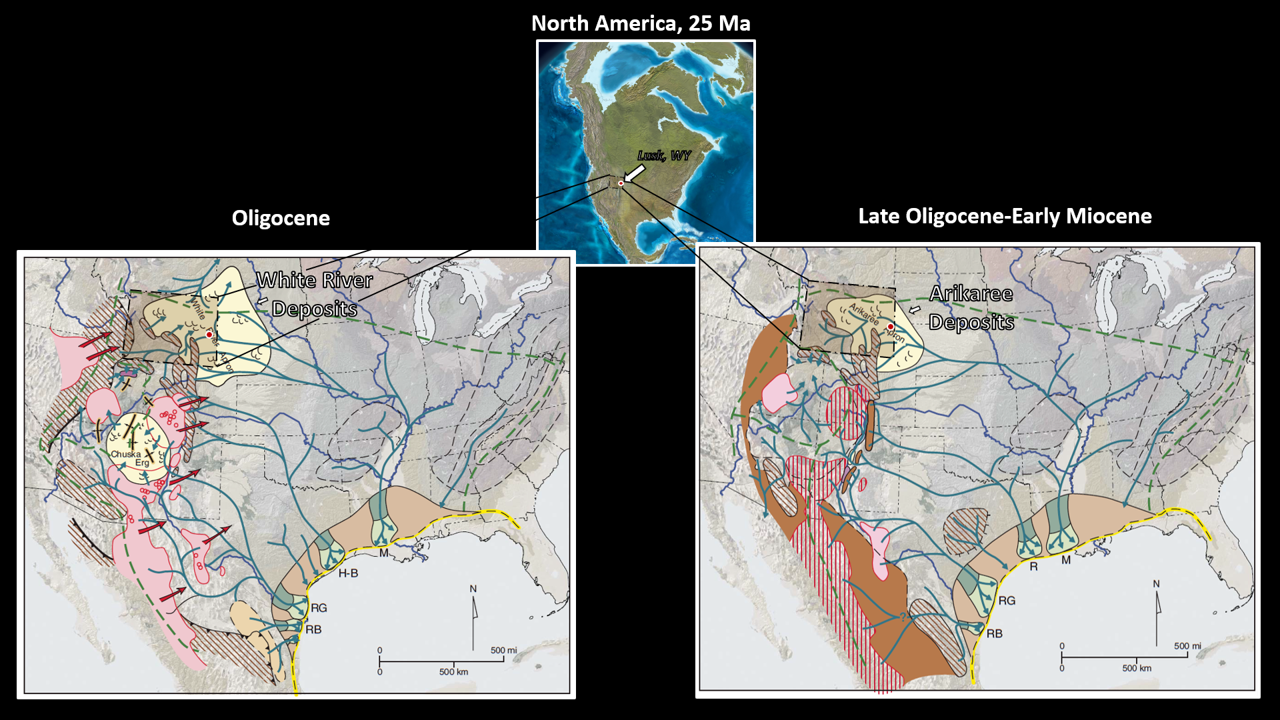 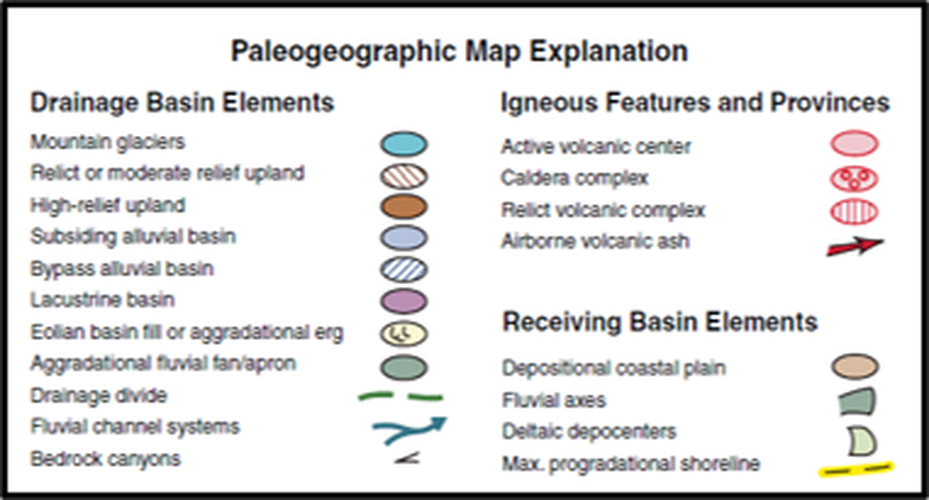 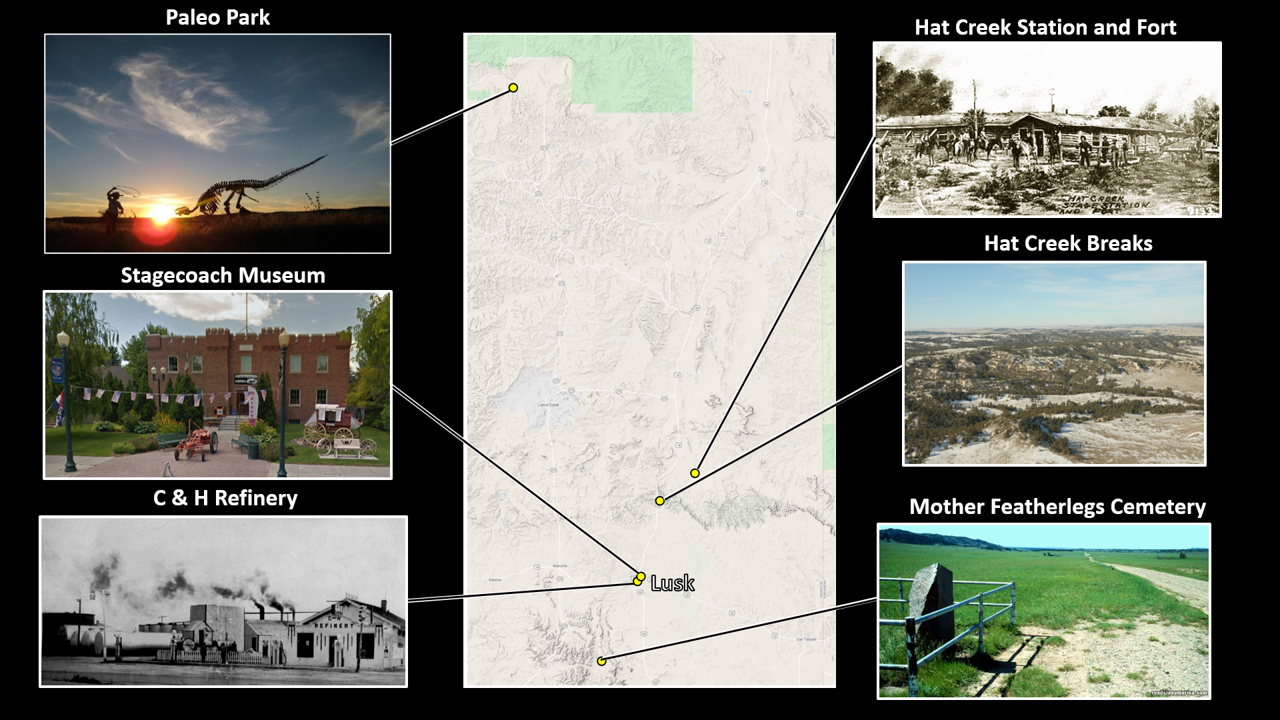